Can You Think Of Any Cars That Switched Engine Location On The Same Model? There’s A Few So Let’s Talk About Them

In general, where its decided to stick an engine in a car is a pretty huge part of its design and development, and, generally, that means you can’t change it once you start building cars. But the World of Cars is vast and baffling and beautiful, to the point where I suspect it had to have happened at some point, right? I’ve been doing some digging and thinking, and I think it has happened, at least sort of. And, interestingly, there’s one company that seems to have done engine location swaps for the same model – or at least pretty close – more than any other. So let’s dig in.

When I talk about the same model of car that swapped its engine location, I mean cars that are on the same basic platform, not just have the same name, so things like the VW Golf-based Volkswagen New Beetle or the 2011 version of the Beetle do not count, even though they share a name and general look as the original rear-engined Type 1 VW Beetle. Same goes for the modern, front-engined Fiat 500s; like the modern Beetles, they’re an entirely different platform and everything. So those types of cars don’t count.

So what does count? What I’m hoping to find are cars that were designed with, say, a rear engine and then later in production converted to front, or vice-versa. Or went from front to mid-engined. I’m going to exclude cars that went from front- to front-mid, like the Ford Mustang, in some configurations, or subtle shiftings that may take a car from rear- to barely rear-mid, like you could argue the Porsche 911 has. I’m looking for more dramatic location swaps.

Also, it needs to be a production car, even if that production is limited. And the platforms, even if they’re extensively modified, need to at least have started out the same. All that make sense? With that in mind, let’s see what we can come up with.

The Kohlruss Steyr-VWs: So Close 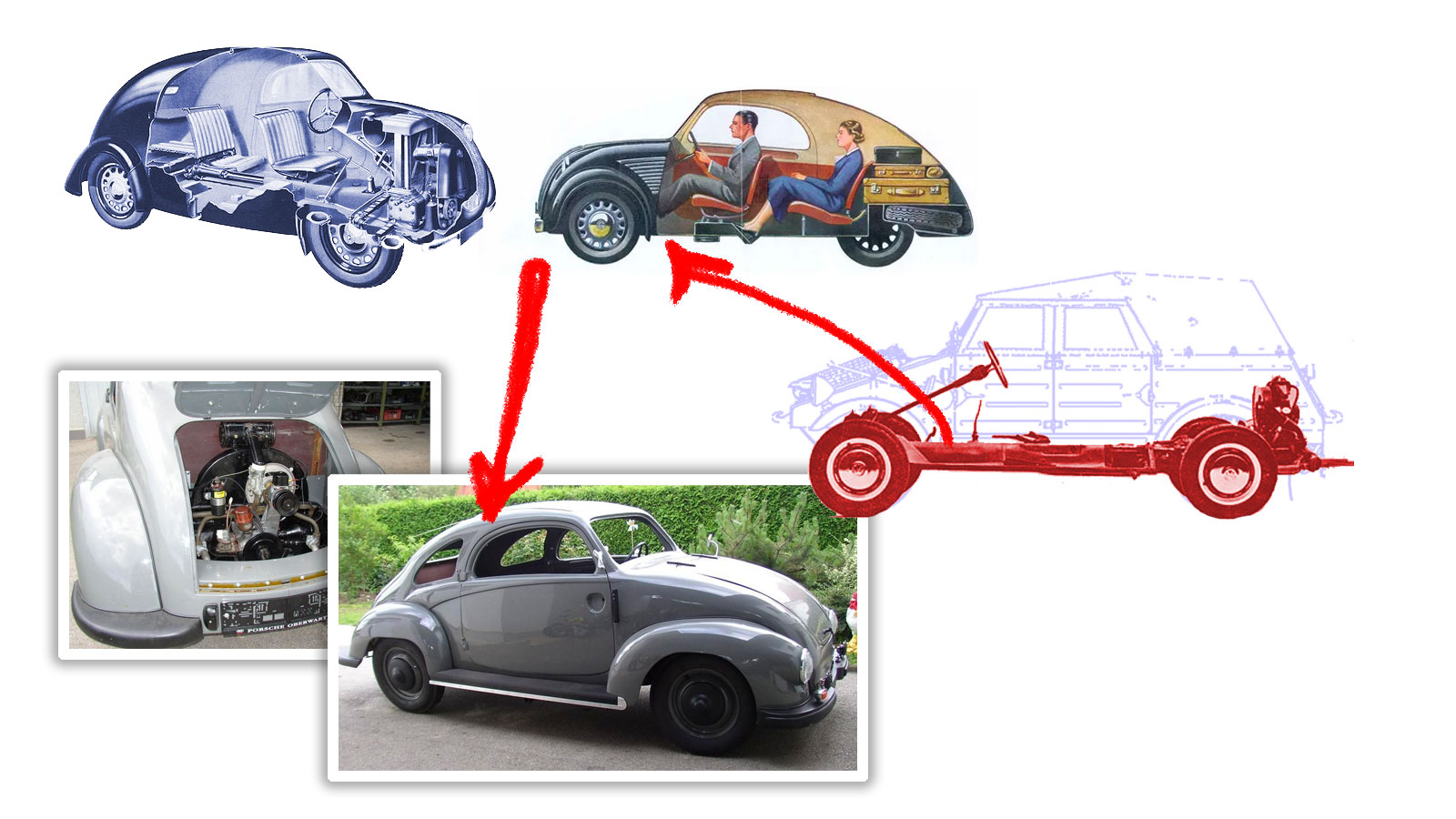 In a lot of ways, these cars are perfect examples of what I’m talking about: a car that started life as a front-engined car, but ended up rear-engined. The problem is that often these were literally the same cars, because the Kohlruss Steyr-VWs were non-running Steyr 50 or 55 (nicknamed the Steyr Baby) models that, after WWII, were combined with leftover wartime VW Kübelwagens to become rear-engined.

I wrote about these years ago, and while there were a number of different variations of this same idea made by various small coachbuilders, the most common seem to have come from Austrian coachbuilder Kohlruss, who took the Baby Steyrs that suffered from engine or gearbox failures – which was many, many of them – and stuck in whole drivetrains from Kubels, effectively transforming a front-engined car into a rear-engined one.

But, while multiple ones were made, this was an aftermarket, desperation change, not real production. It’s conceptually what I’m thinking of, but unless it’s production, I can’t count it. 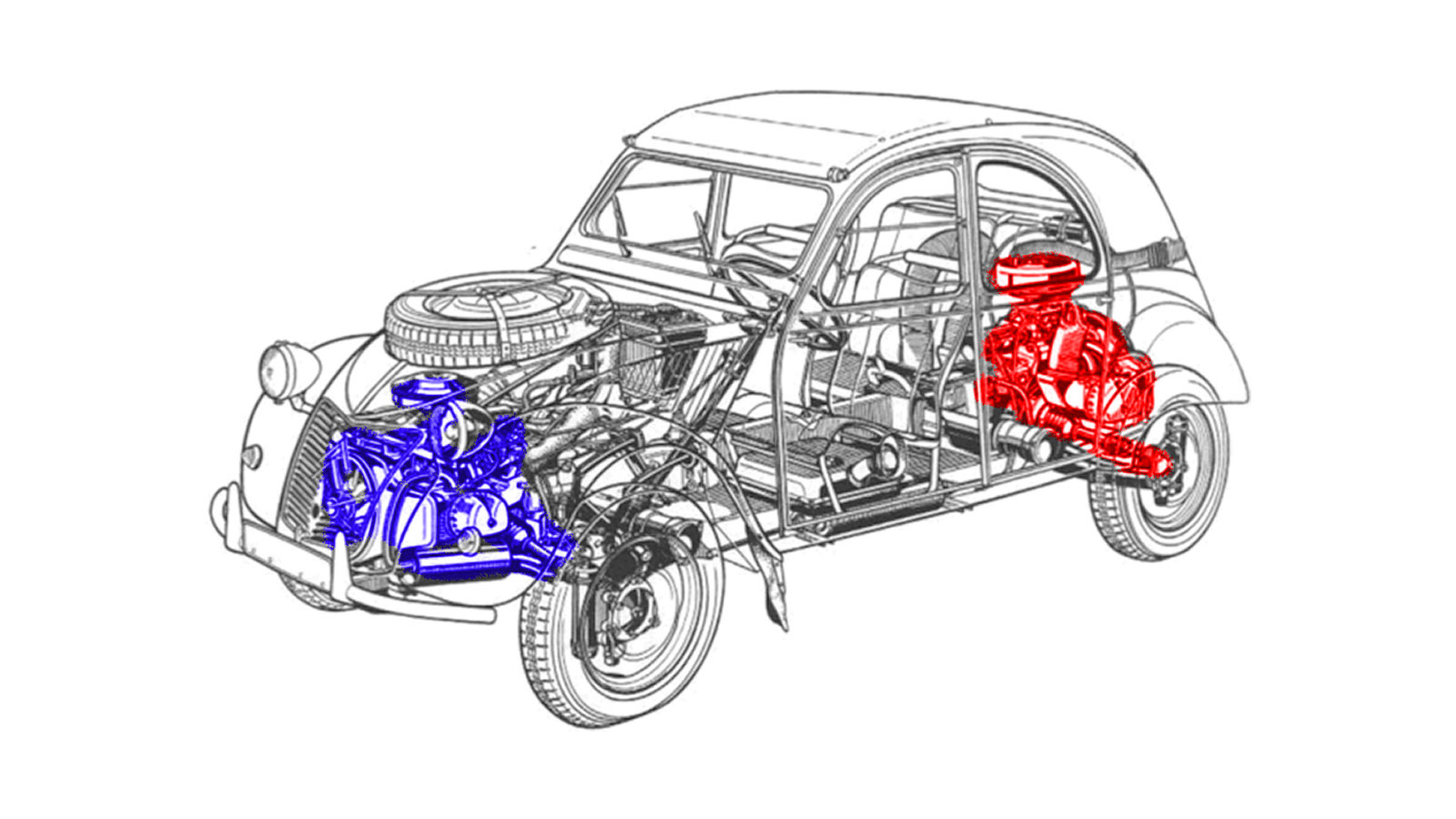 This one is a little tricky, because while it definitely is a production (low volume, but whatever) car, and definitely was a front-engined car that was adapted to have a rear engine, the only time that rear engine layout was used was in the same car as the front engine. Yes, the 2CV Sahara is one of the only production twin-engined cars ever, so I’m not sure if this counts.

I mean, maybe it does? Citroën absolutely did the engineering to install their air-cooled flat twin into the rear of the 2CV, and, hypothetically, they could have built a rear-engine/rear drive 2CV with a front trunk if they felt like it, but there wouldn’t have been much point to that. Getting four-wheel drive without having to engineer driveshafts or new gearboxes, though, that was what they were after, and the twin-engine solution did that.

Still, I’m not sure if this counts, because the engine wasn’t moved, it got another instance in the same car, which feels different.

The One Who Did It: Renault 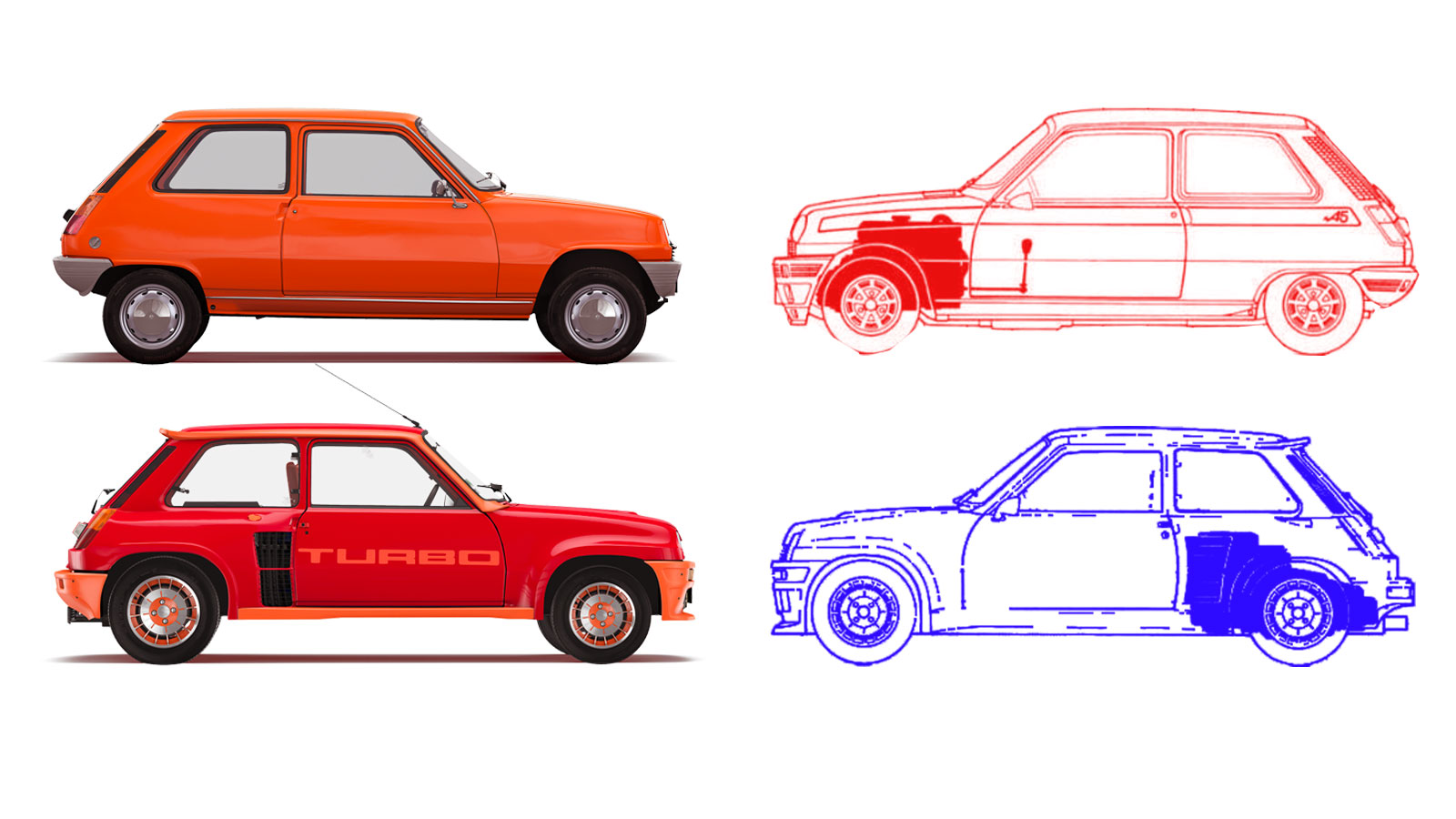 I think the only actual, people-could-have-bought-one examples of a model of car available with the engine in two different locations has to be Renault, with their Renault 5 and the Renault 5 Turbo versions starting from 1980 (one front-FWD economy car, the other a mid-RWD sports car) and then later they did the same basic idea with the two generations of Clio and Clio V6. 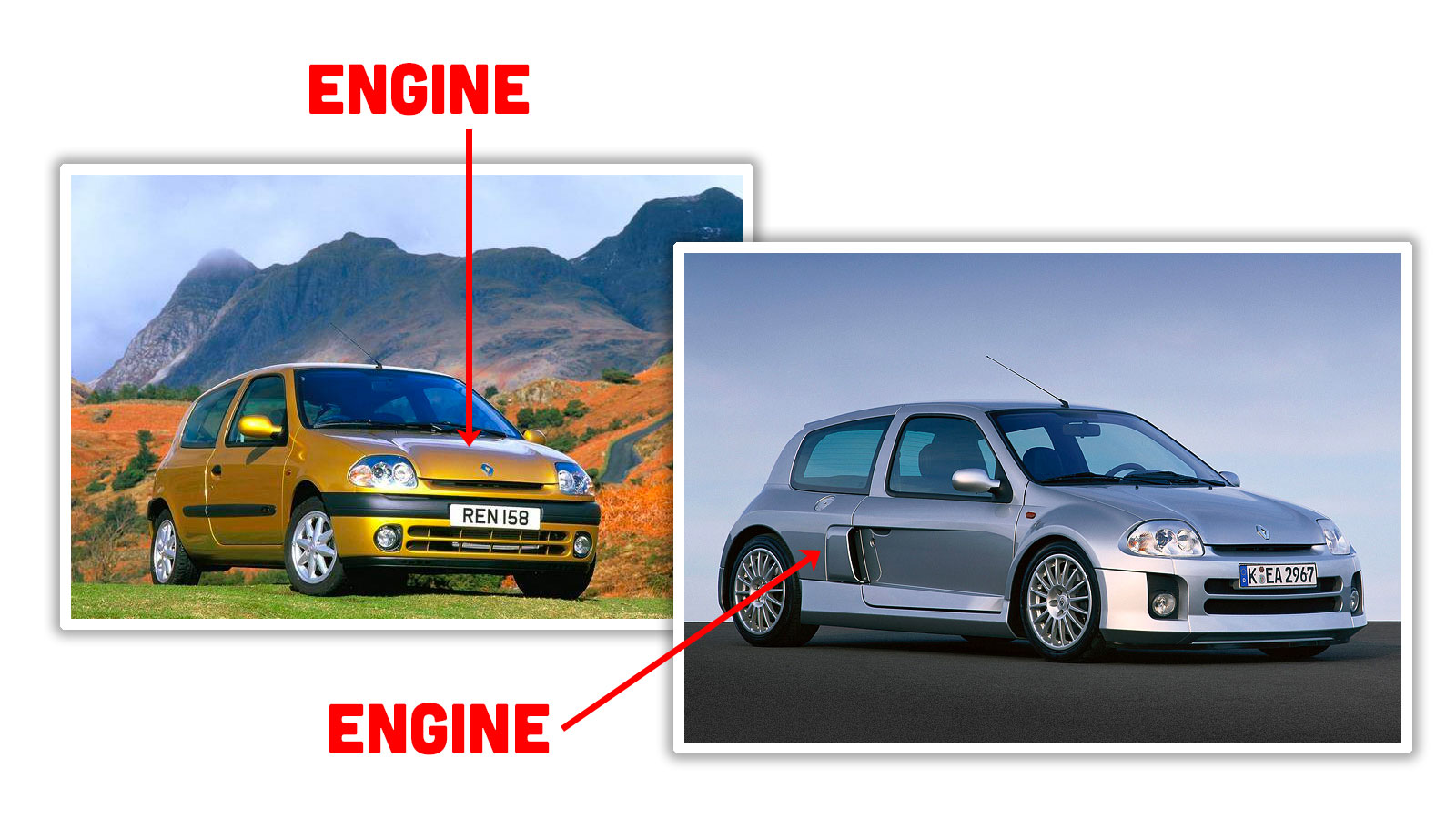 For both of these cars, even though the much more powerful mid-engine versions were heavily modified from their origins as a little FWD econobox, they crucially did at least start with the same platform and modify it to work with the mid-mounted engine location. Other similar rallycross-focused cars like the MG Metro 6R4 may look like the little shitboxes they derived from, but, in the case of the MG Metro 6R4, the whole car was built on a was a very racing-focused tube chassis that had nothing to do with the original car.

How did it end up that Renault managed to pull this strange feat off when no other automakers had ever succeeded? Or, maybe more accurately, bothered? I think there’s two reasons Renault felt comfortable trying this.

First, they had a bit of history with drivetrain flipping, as the same drivetrain that powered the old 1947-1961 Renault 4CV went on to power the later Renault 4 from 1961 to 1994, just driving the opposite wheels at the opposite end of the car. 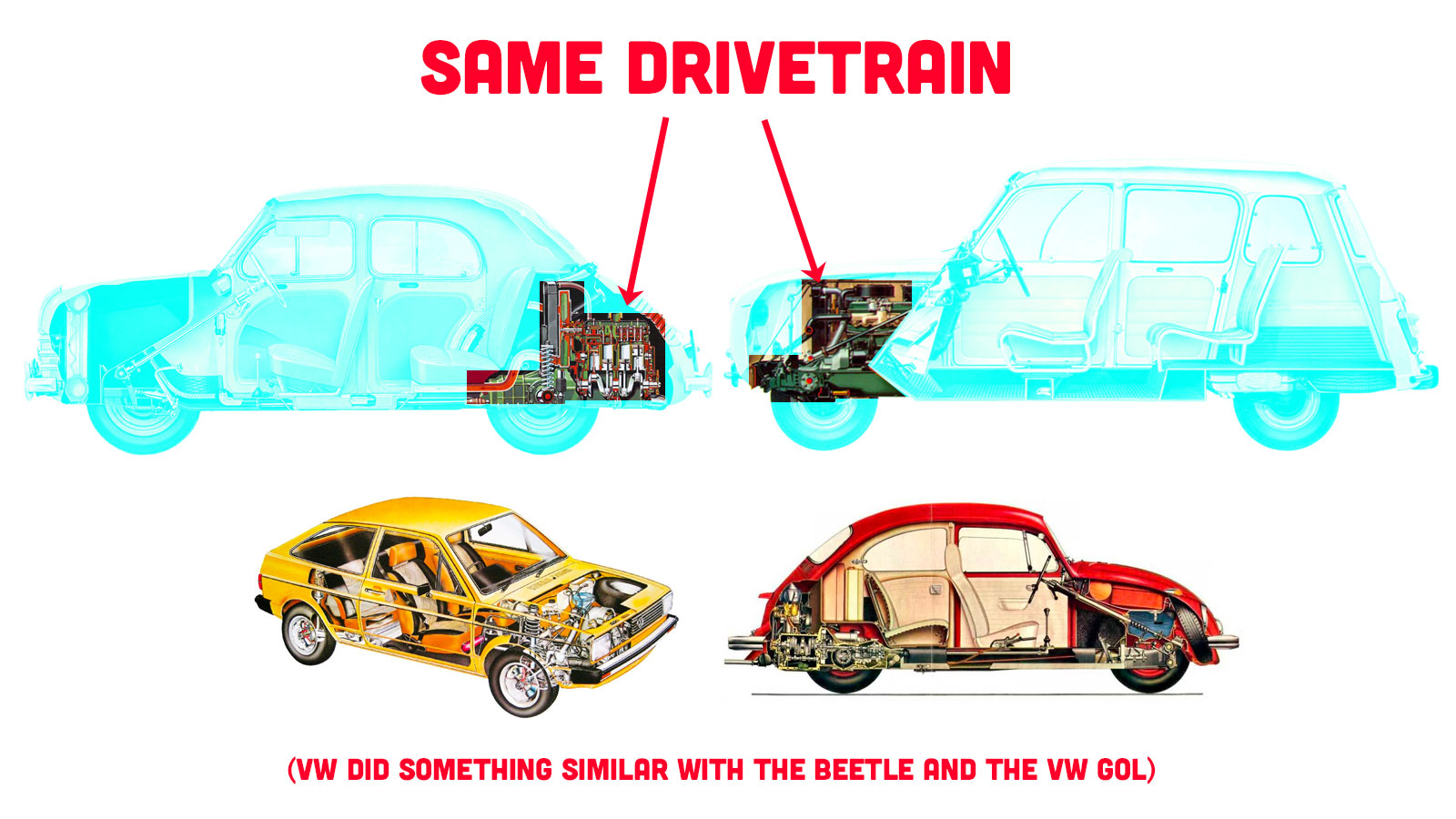 I should mention that Volkswagen did something similar when they flipped their air-cooled flat four around 180° and put it in the front of the Brazilian VW Gol, so this kind of thing wasn’t unheard of, just not terribly common. And, Toyota stuck transverse fours from FWD hatchbacks into the middle of an MR2, GM did something similar with the Fiero, and so on. Still, Renault did it for their high-volume cars, so I think they had some comfort there.

Next is the Renault 21, which came out in 1986, after the R5, but it’s another example of Renault’s unusual comfort with weird drivetrain variants in the same car, because this is one of the incredibly rare cars I can think of that came in a both transverse and longitudinal engine configuration at the same time. It was the Renault 18, which we got in the US as the Eagle Medallion. 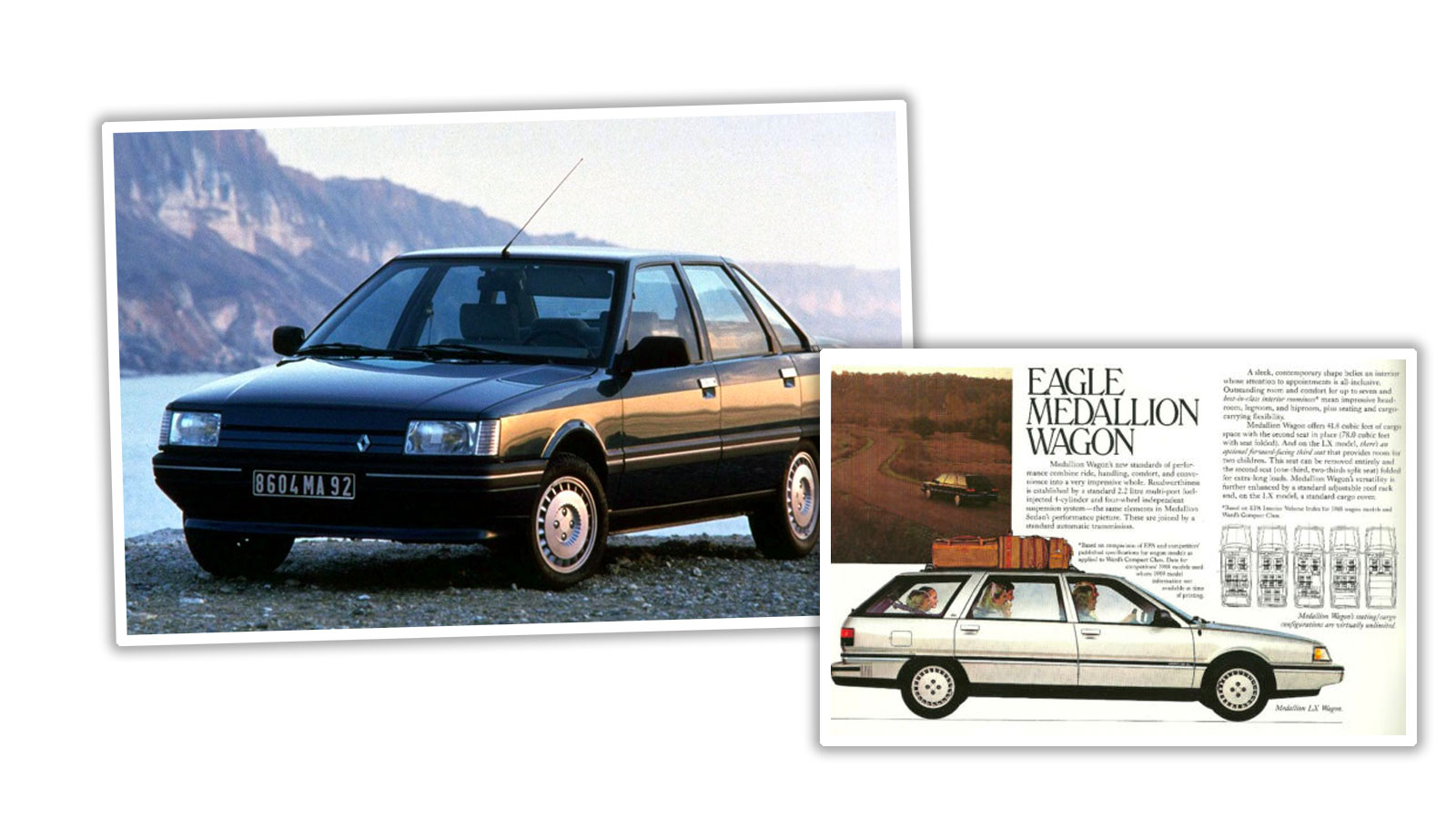 The smaller 1.7-liter engine was installed transverse, and the larger 2-liter engine was installed longitudinally, both driving the front wheels. This isn’t the same as a whole location swap, but it’s weird, and I take it as proof that for whatever crazy Gallic reasons, Renault has been uniquely willing to make cars in engine layout variations that seem to make no sense to anyone else.

I feel like I may be missing some other examples of the same models with completely different engine locations, so if you can think of any, let’s put them in the comments, so this page can become a bold and welcome resource for all weary wonderers thinking about this same, vitally important question.

I'm a co-founder of the Autopian, the site you're on RIGHT NOW! I'm here to talk to you about taillights until you cry and beg me to stop, which I absolutely will not. Sorry. Hug? Also, David's friend.
Read All My Posts »
PrevPreviousThe Tiny Bede BD-5 Was A Homebuilt Plane With Remarkable Abilities, And An Appetite For Blood
NextCold Start: Shameless Plug Approaching, Be AwareNext