The back tables at the Crimson Lantern are bleak, forgotten places shunned by the popular cliques of the various factions of Taillifestyle — the amber-clad Blinker Kids, the Altezzas, the Red Menaces, and so on. The back tables, under constant aerial assault by leaks and crumbling acoustical ceiling tiles, are the haunt of the Backlighters, which is what the loose confederation of reverse-lamp aficionados and fetishizers call themselves.

The Backlighters are a sad, strange group ostracized by the more glamorous, prominent, larger, and more colorful taillight sections and their respective factions, and as a result they’re constantly imbibing a cruel brew of resentment and pride, genuine in their beliefs about the value that reverse lamps bring to humankind, yet constantly chafing at the lack of respect from their peers.

I really can’t think of any good reason why, but reverse lamps tend to be treated with at worst near-contempt, and at best disinterested forgetfulness by the greater taillight community. Nobody loves them, and that’s sad.

They’re one of the only lamps not required to be paired (a single reverse lamp is legal in most global markets) and if you look at a lot of taillight designs, the reverse lamp seems like it’s just slapped on as an afterthought, minutes before the car was to be shipped out. If you somehow don’t believe that the reverse lamp is not respected, let me remind you of some of these reverse lamp treatments that feel like either last-minute corrections, cheapskate cost-savings, or some kind of strange shame: 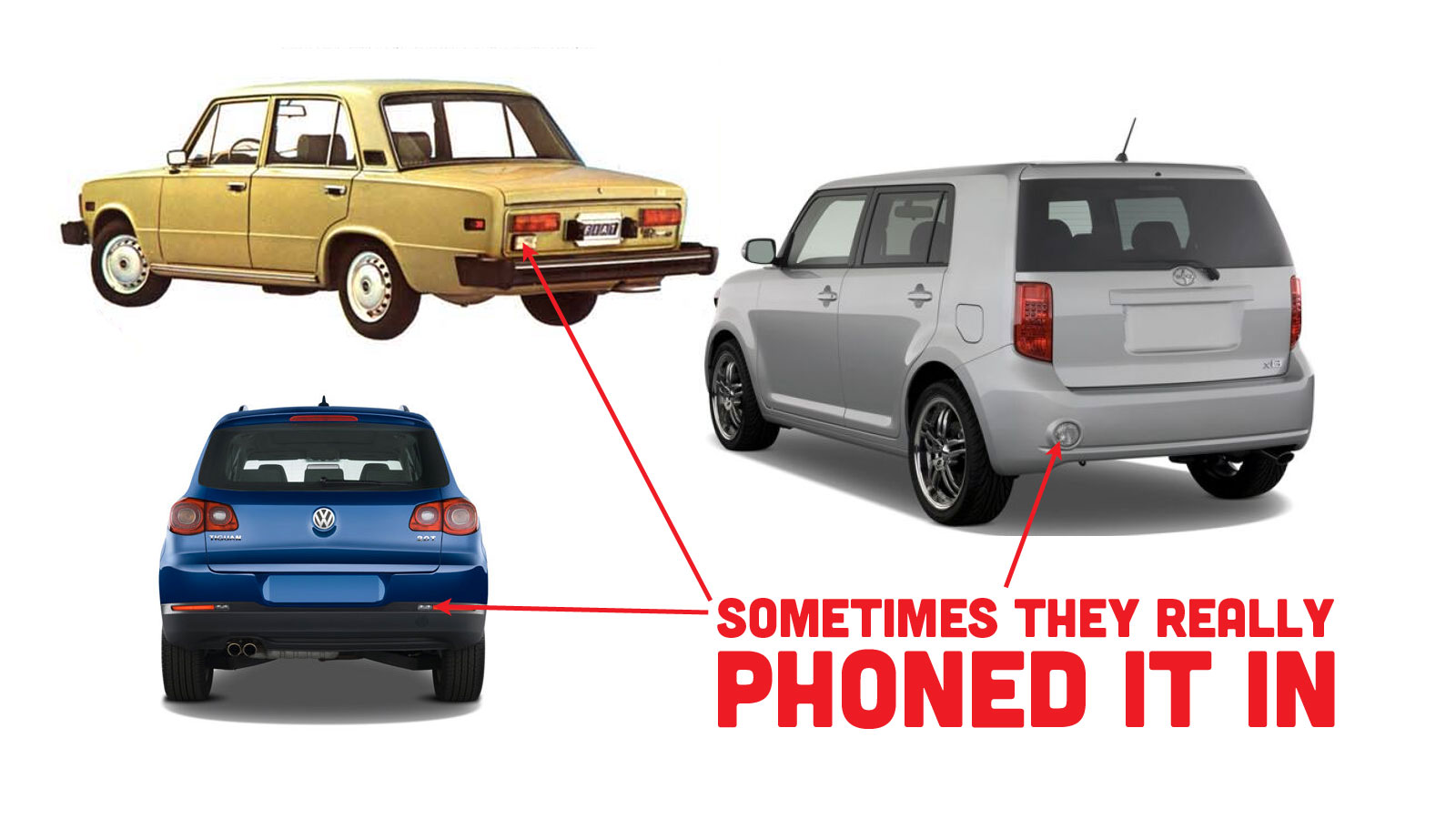 The reverse lamp deserves better than this. After all, it’s the only taillight component designed to provide both signaling functionality as well as actually illuminating the driving direction, like a headlamp. It’s a big job, and it should be respected!

This radical idea that reverse lamps are worthy additions to the constellation of automotive lighting and deserve respect, even admiration, is something I genuinely believe, and am not afraid to express. This has allowed me access to the Backlighter community, normally highly mistrustful of outsiders, and with that access came the arcane knowledge of what the Backlighters believe to be the greatest advancement of the Art of Reverse Lamps.

Old Retrograde, the leader of this branch of Backlighters, was the one to reveal the secret to me. He beckoned me to his dank table, in a dark, forgotten corner of the bar. I sat down, and he immediately seized my arm with a strength and intensity that belied his frail looks.

“I don’t have much longer,” he rasped, making a show of some very moist-sounding coughs. “I need you to see this before…before I’m gone.”

He slid a blue-and-yellow envelope to me, emblazoned with the SAAB logo. Then, he muttered “put it in R, friend,” and let his head drop heavily to the table.

I leapt up in shock, and yelled to the bar. “Old Retro is dead! He just died here! At the table! Someone help!”

The bar was silent for a moment, then the din of conversation resumed. Blanche Lux, the Backlighter’s most charismatic member, a spry 92-year-old woman in a sequined halter top, turned to me.

In the end, I realized that I didn’t donate any fucks either, so I threw my jacket over the old drama queen and opened the envelope.

What I saw in there made me realize that if I thought I had esteem for the reverse lamp, the fine Swedes over at Saab agreed with me. In fact, they’ve done more to advance the art of reversing-illumination more than pretty much anyone, and one of their incredible driving-backwards-with-light innovations is what I want to show you today.

You see, Saab built cars with reverse lamps not just at the rear, but at the front as well, for years and years.

Okay, calm down. I mean it. I need you to stay calm and listen. This is not madness; there are some excellent reasons for the front, corner-mounted reverse light, and you need to understand them. So, let’s get started. They can take a few forms, but they generally look like this: 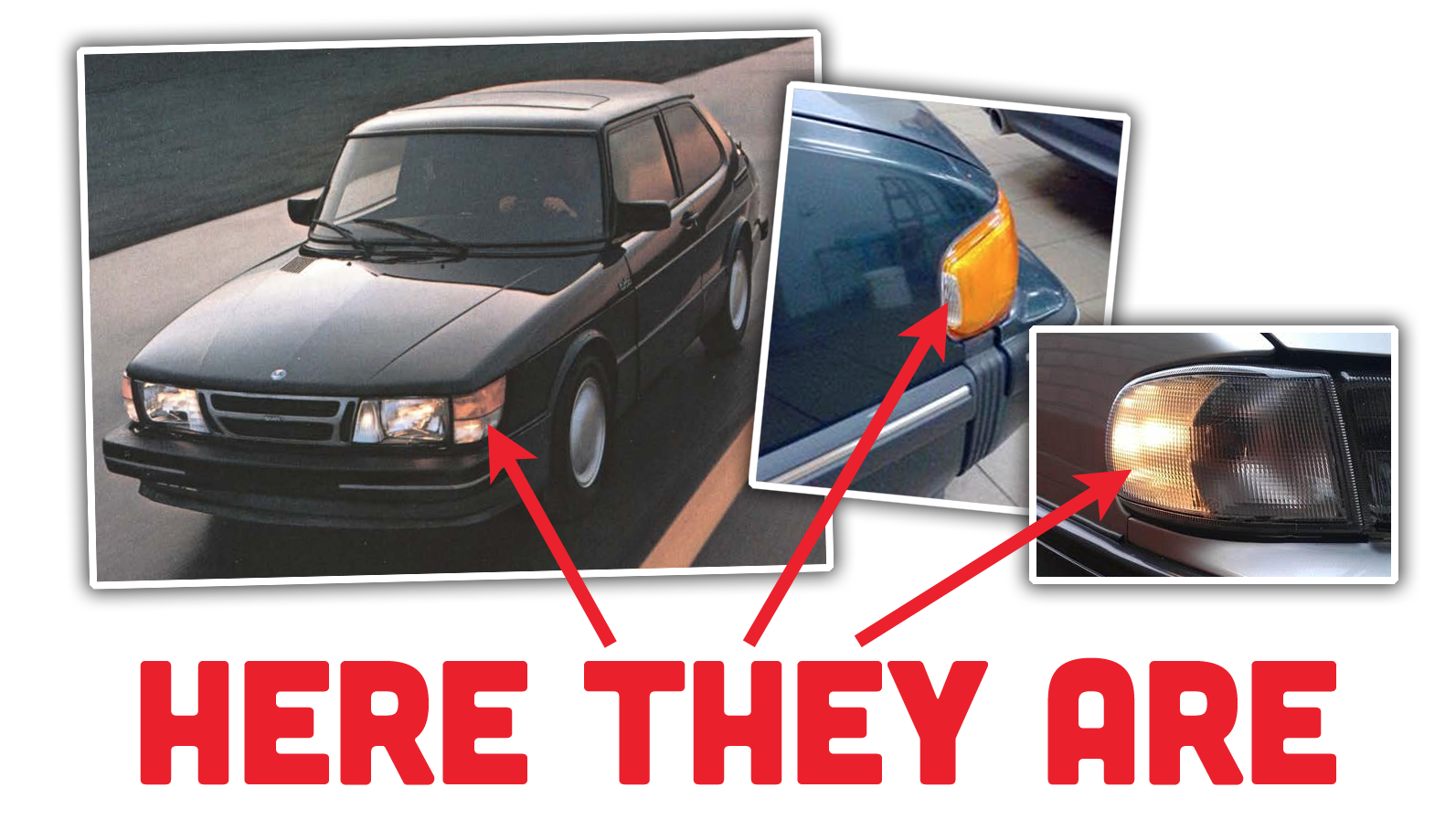 To the casual observer of automotive lighting, one may assume that these are simply cornering lamps, another sort of clever and under-appreciated bit of automotive lighting I once covered for the Jell-o Picnic Internet Car Magazine. And, while there is a cornering light function in those corner light units (as well as a parking lamp, turn indicator, and sometimes DRL) the reverse lamp innovation is a separate function entirely. 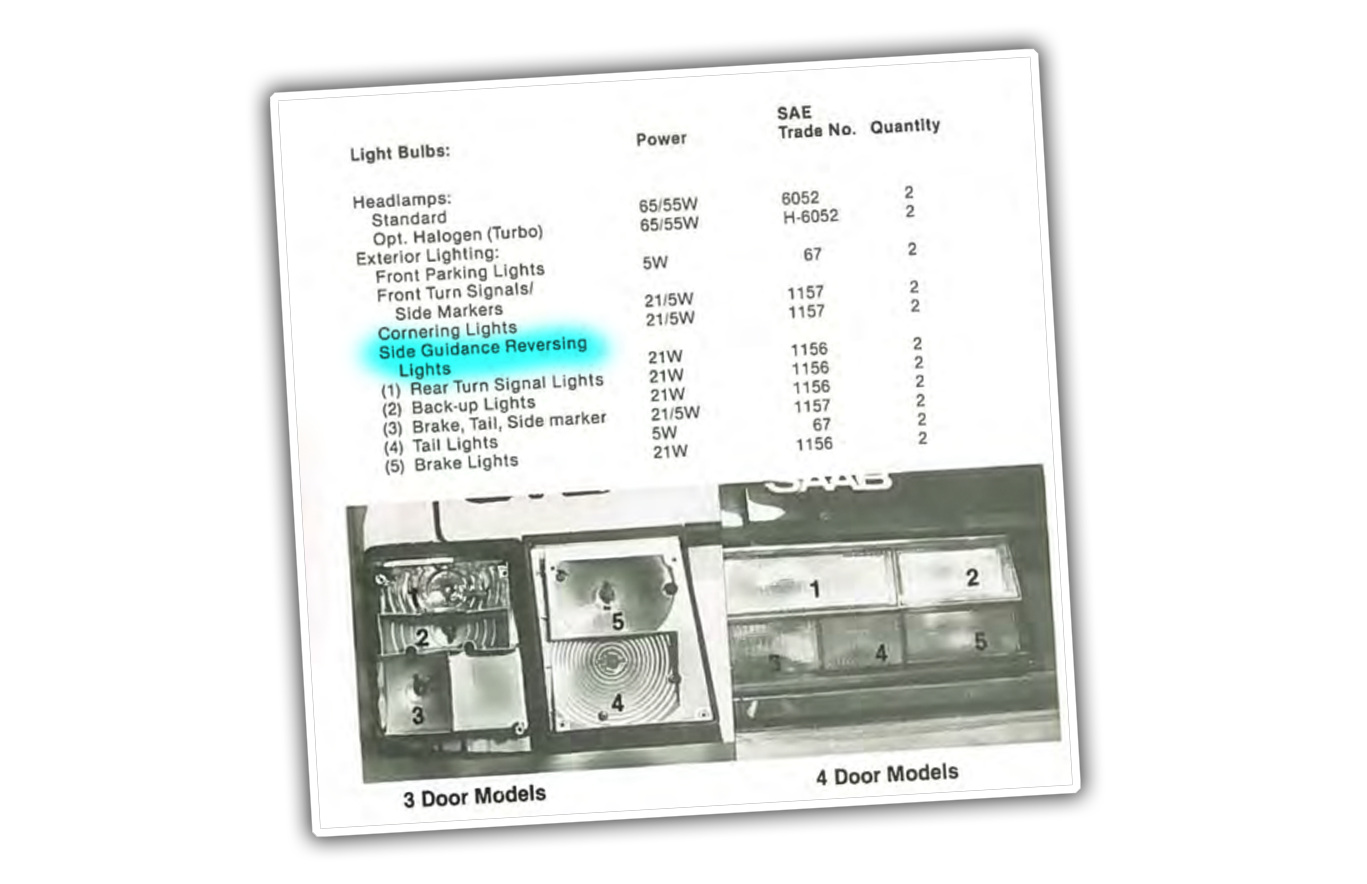 According to Saab owner’s manual bulb charts, the official name of this lamp seems to be the Side Guidance Reversing Lights, and that’s a pretty appropriate name. What these extra reversing lights do is provide a really useful bit of extra illumination where it’s needed most, especially when you’re reversing out of a tight place in the dark. This may be best explained visually: 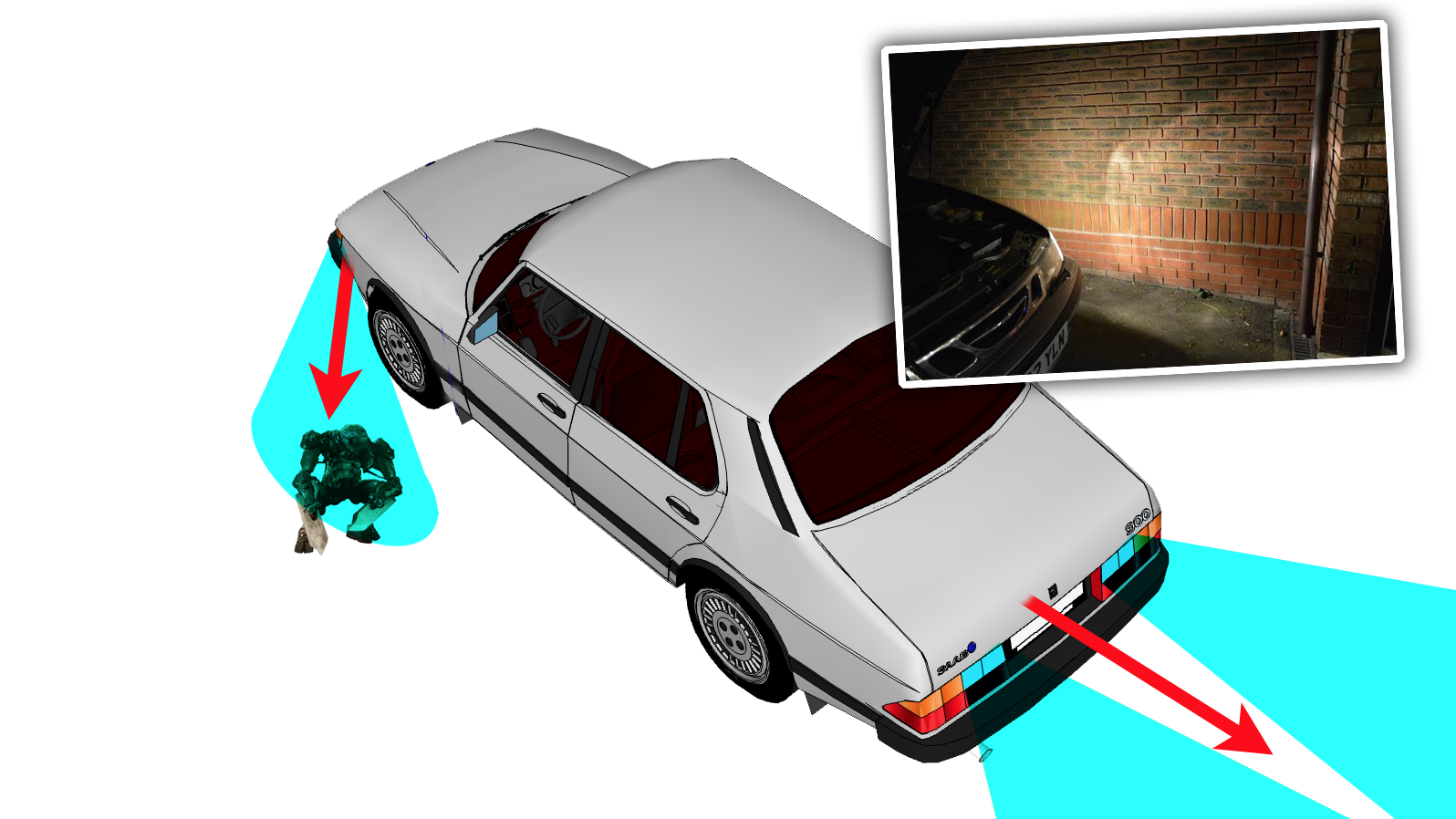 Often, when you’re backing out of a parking spot or some other location, you’re not going straight. You’re turning, in reverse to maneuver where you need to be, yet in the dark, your reverse lamps just illuminate the area directly behind the car, even though the front half of the car may actually be moving in a different direction due to steering angle.

As a result, there’s a pretty huge, un-illuminated blind spot behind the front quarter of your car, which could easily end up in an impact to an unseen post or bollard or wall or other car or hydrant or swirling blades or whatever. Lots of us have banged into things in exactly this situation, and Saab’s clever Side Guidance Reversing Lights could have solved this problem simply and effectively.

The Side Reverse Lamps Deserved Better

It’s such a wonderfully useful and clever solution that I just want to spit, out of respect. And yet, somehow, the world remains largely ignorant of this important innovation, with even Saab owners themselves baffled at the side reverse lamps, and thinking that perhaps there’s something wrong with their cars.

Saab’s gone now, and likely won’t return. I can’t think of any current manufacturer that offers a lamp like this today. And, sure, ultrasonic sensors now do the job of warning us when we might smack into something unseen, but those come at a cost of incessant and annoying beeping and bleeping, and the sensors make bumpers and minor accident damage so much more expensive.

They don’t have the elegant cleverness of the Saab Side Guidance Reversing Lights, and that sickens me. Maybe Old Retrograde was right to defiantly fake his own death, as an act of defiance against a world that has failed, once again, to appreciate the contributions of a reverse lamp to the human condition.

For what it’s worth, I appreciate it.

I'm a co-founder of the Autopian, the site you're on RIGHT NOW! I'm here to talk to you about taillights until you cry and beg me to stop, which I absolutely will not. Sorry. Hug? Also, David's friend.
Read All My Posts »
PrevPreviousI’m A Real Car Designer And I’ll Draw Your Ridiculous Ideas
NextLotus’ First SUV Is A 600 HP Electric Beast That Can Detect The Presence Of ChildrenNext