Car design is easy right? When something looks wrong or bad, it’s just the designers being lazy, isn’t it? Those marker pushers should get out of the way and let the engineers do their job, shouldn’t they?

Hi, my name is Adrian Clarke, and I am a professional car designer. I have a degree in automotive design from Coventry University, and a masters in vehicle design from the world famous Royal College of Art in London, where I was tutored by J Mays. I was hired straight from there into a major European OEM, where I worked for a number of years until the world went sideways.

To give you a better understanding of what a designer does and doesn’t do we’re going to be doing some car design right here on The Autopian. If you’ve ever thought you could do better, or have great ideas for a vehicle type that no sober OEM would ever build, well then this is your chance to get involved!

So if you want to be a designer, put a diecast model car on your desk, pull on a black turtleneck sweater and grab an espresso. We’ve got cars to create. To kick us off and give you an idea of what we’re going to be doing, I’ve come up with a design for an off road minivan. Torchinsky gave me plenty of ideas, all of which had me screaming into a cushion. This one came from the slightly saner mind of David Tracy who gave it to me to implement. This isn’t entirely unlike how it works in the real world, where a marketing department or the board might ask the design studio to create a proposal for either a new version of an existing car or a new type of car altogether. Of course, the design studio can and does come up with ideas on its own as well.

The problem with minivans is, despite their suitability for doing family-hauling type stuff, they lack sex appeal. They have been usurped in family duties by the crossover, which give off a slightly rugged outdoorsy vibe that customers find appealing. Despite arguably not being as good as minivans for lots of families, crossovers are practical enough, and this matters – image does sell cars.

So with all that in mind, let’s try to give the humble minivan some of that “active lifestyle” appeal. Here are some quick thumbnail sketches. These are done to get the ideas down on paper – designers do their thinking on the page. They won’t all be good ideas, and you won’t always be sure exactly what you’re going for – but getting them down helps the designer understand what might and what might not work. 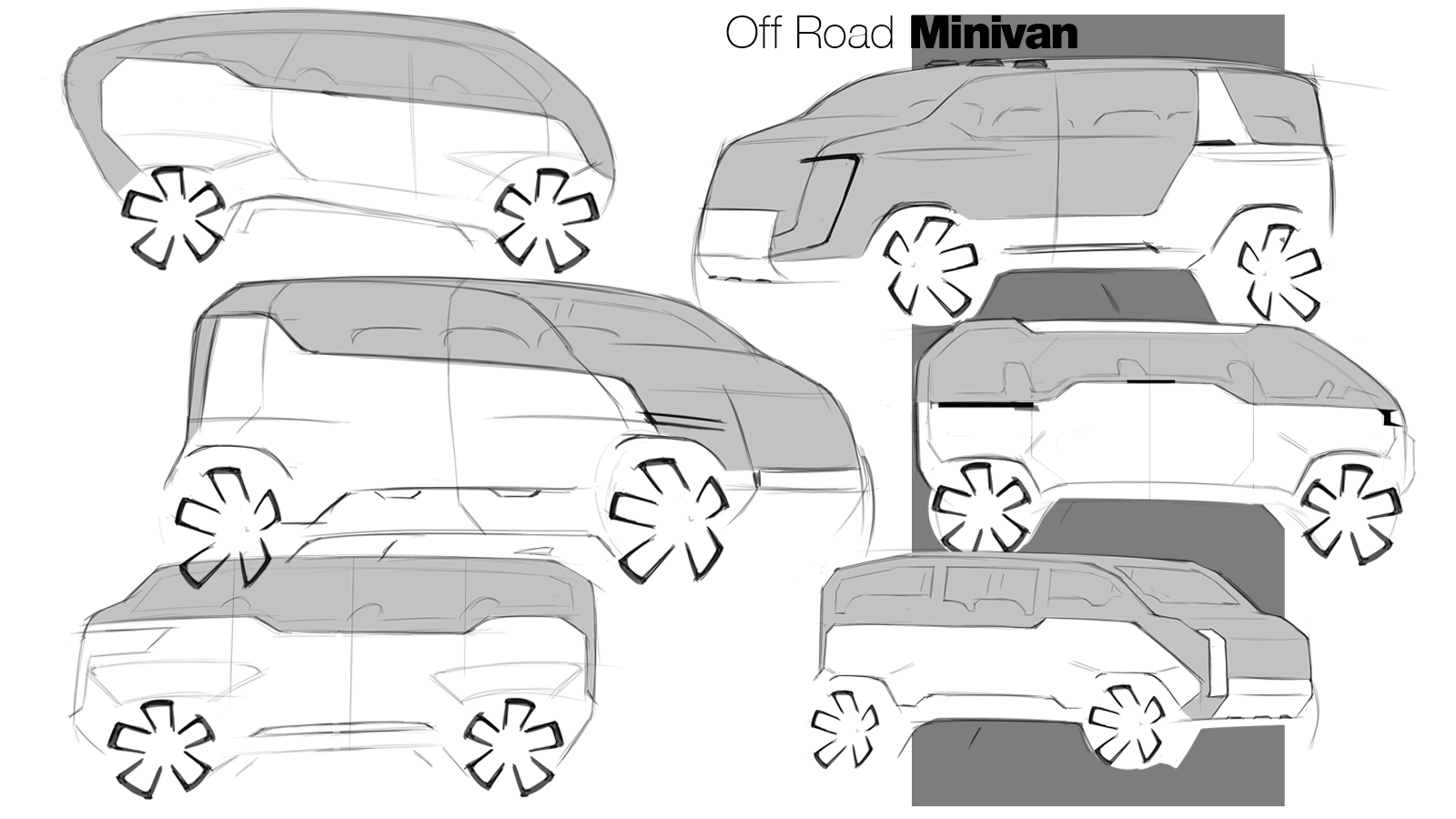 At this point we’re not concerned with any boring production reality, safety legislation or anything like that. All that comes later after the design is frozen and the process moves into what is known as the realization, or production design, stage. The only thing to consider is that what you are drawing has to conceivably fit in with the brand.

It’s worth noting that it’s mainly premium OEMs who have a strong brand identity – a set of visual cues and style that is common across all their models. Mass market manufacturers tend to go for distinction within a segment to stand out. Of course, we have no such limitations here, so we’re free to be a bit more creative.

At the beginning of a project, a designer will turn out loads of these rough types of sketch – typically ball point pen on paper, with maybe one color of marker (usually gray) to indicate highlights or graphical elements. Mine were done directly in Photoshop, but the principle is the same – a simple outline and one gray tone, although here I’ve used it to indicate the graphical break-up of the body. Minivans are essentially “one box,” or to use a professional term, a “monovolume.” They don’t have a lot of shape to the sheet metal aside from the outline of the car, so the graphical break-up becomes much more important.

Once the designer has found something they like, it’s time to turn it into a more detailed render. Color, details, highlights and shadows will be added. This will take that favorite ball point sketch and make it into something suitable to pin up on the board for review by a more senior designer. 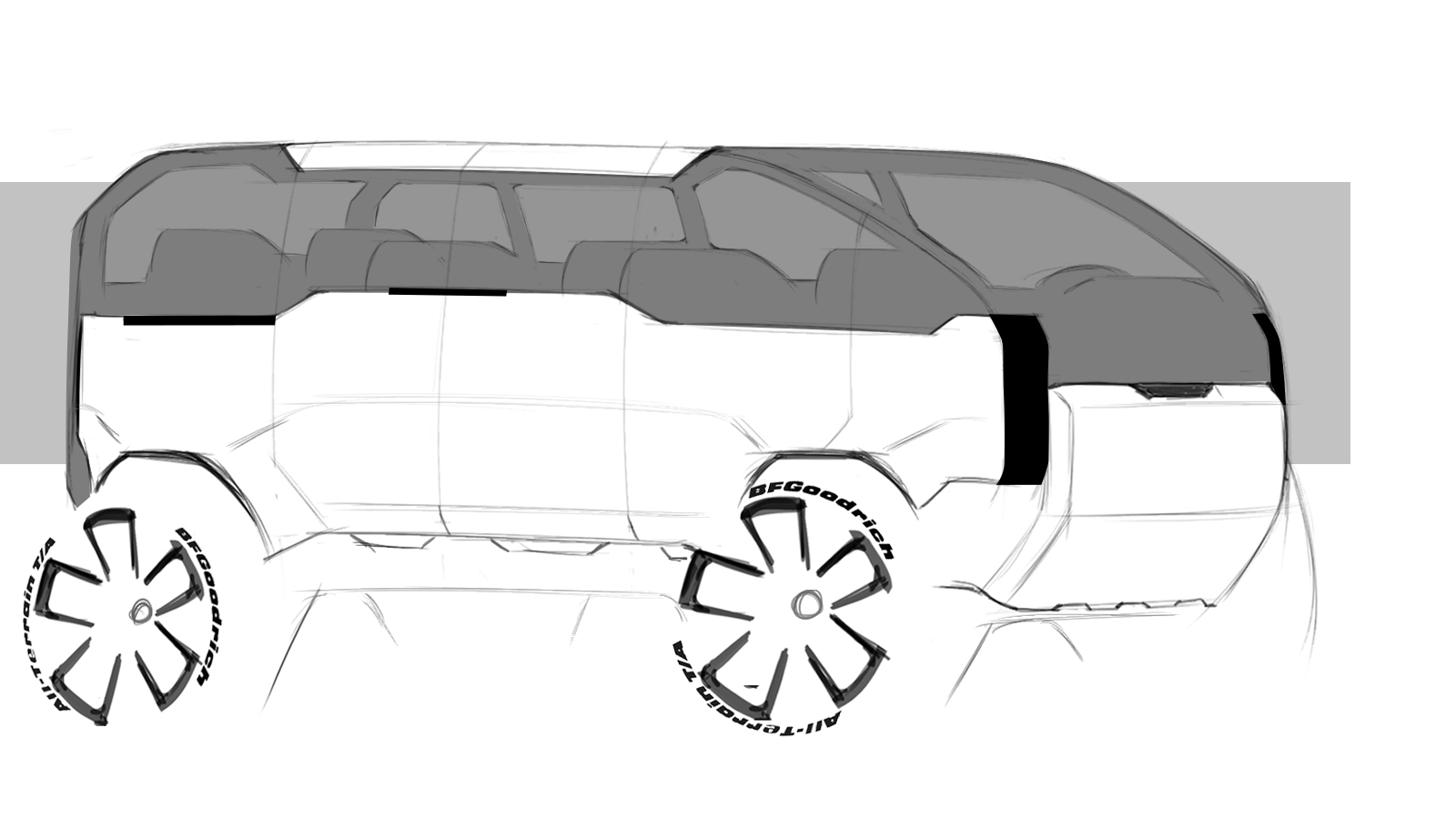 When all the junior designers have put their work up, a review will take place. Suitable designs might be chosen to go forward to the modeling stage, or the senior designer might ask for another round of renders if they don’t see anything they like.

So our chosen design has a large body volume, with a lot of glazing. Occupants in the back two rows, especially if they’re kids, like a good view out. The rise in the belt line in the middle, across the doors, provides visual interest. If this were just a straight line, it would look a bit dull and weak. The chamfer at the top of the tailgate where it meets the roof takes some of the visual weight out of the profile and prevents the car from looking too blocky, and potentially moves the hinge point back so less room is needed to swing the tailgate open. The body colored middle section means you can still fit roof accessories without worrying about damaging glazing trim pieces. 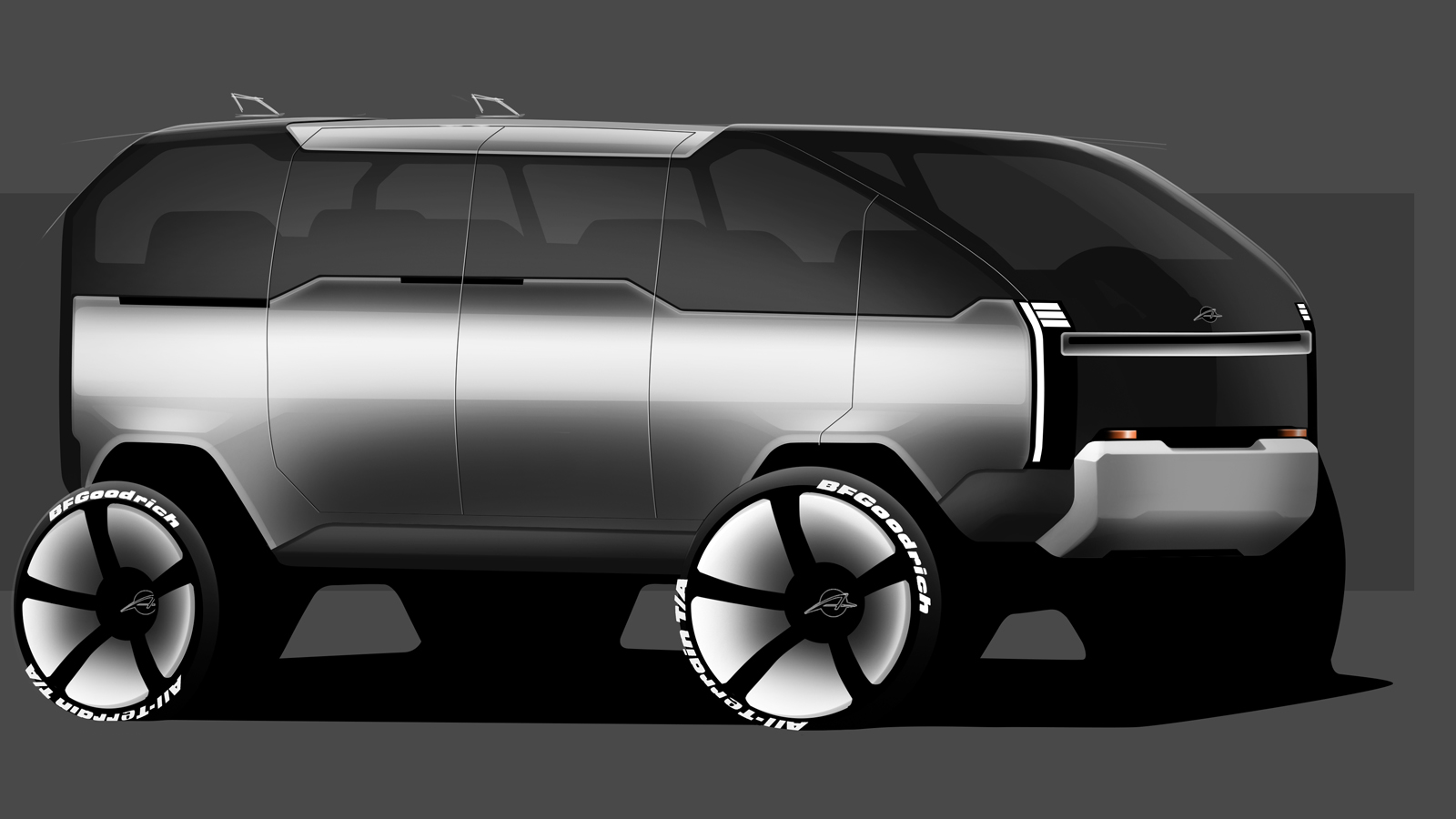 Hopefully this has given you some idea of the beginning of the car design process. Now it’s your turn. Submit your ideas to design@theautopian.com and we’ll pick the best, most interesting or downright weirdest, and together set about turning them into reality. Well, into some nice renders, at least.

Professional Car Designer and writer about car design. I have a BA in Automotive Design and a Masters in Vehicle Design from the Royal College of Art in London, where J Mays was my tutor. He used to bring in donuts. I was hired from there into a major European OEM. I daily drive a 2011 L320 Range Rover Sport and also own a 1983 Ferrari Mondial QV. I always wear black, love goth music and have way too many books. twitter: @adrianfclarke. Instagram: adrianfclarke
Read All My Posts »
PrevPreviousAn Earthquake Ripped A Car’s Face Off Just Before A Big Design Review. Here’s The Story Of How Designers Rallied Through Chaos
NextSaab Put Reverse Lights At The Front Of Its Cars And It’s Actually BrilliantNext