Reading a lot of carmaker press releases changes you. It’s not an immediate change, but something more akin to how a river wears down a jagged rock into a smooth, streamlined river stone. In this analogy, the river is the never ending flow of carmaker press releases chock full of bullshit, and the initial rock is your outlook with a healthy, craggy coating to protect you against cynicism. The resulting, smooth rock is how you now see the world, worn down so all that’s left is cynical skepticism. At least, that’s how most press releases work. This Honda press release – maybe it’s more of an article?– about the early development of its electric vehicle projects is unique, though, because it expresses frustration and failure so boldly and unashamedly that I have to respect it. Hell, it talks about how a project leader wanted to chuck a prototype in a hole and bury it! How often do you hear that from a company?

The press release chronicles the early development of Honda’s electric vehicle program, and makes it very clear that not only did Honda lack the expertise to build an EV, but the company was one of the last to the game, too:

“However, Honda had no previous experience with electric powerplants. Also, at the time not much research was being done with regard to alternative-fuel vehicles. Therefore, we decided to take up the challenge of making an electric vehicle.

It was soon apparent, though, that several companies in Japan and overseas had already commercialized the concept of an electric vehicle. For this, the staff at Honda had the first and second oil crises to thank. In fact, Honda was the last to join the race.”

Honda put together a team, led by Large Project Leader (LPL) Junichi Araki, and work began on an EV prototype. Using an off-the-shelf motor and lead-acid batteries, the team converted a three-door Civic and demonstrated the working proof-of-concept car to Araki in July of 1991. 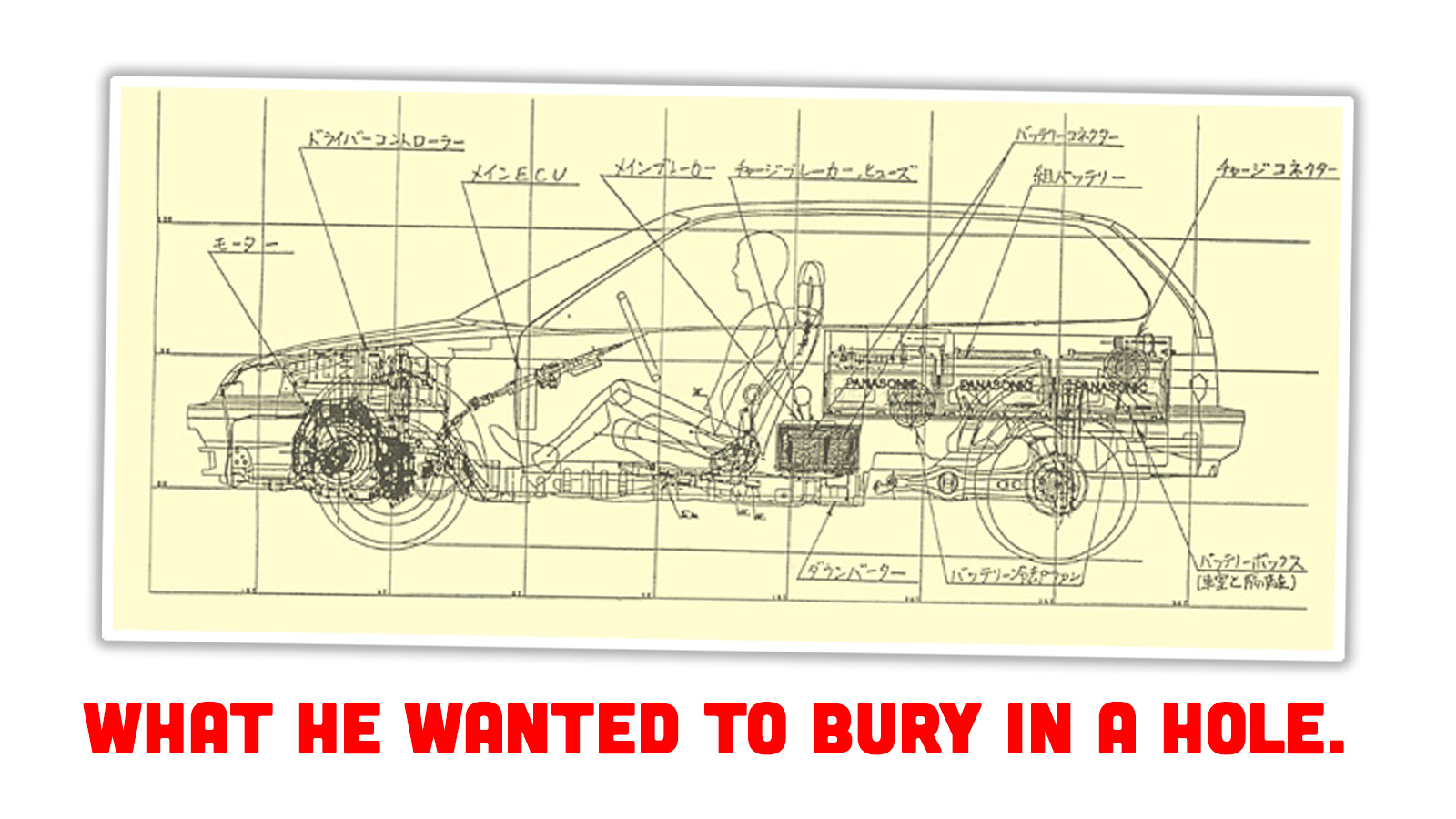 Now, most carmaker-written histories would describe an early development project like this by saying things like “from these humble beginnings, a great project grew,” or “a great deal was learned from these early experiments” or something like that. Something that puts a positive spin on things. What you’re not likely to see is something like this:

“I was yelling, ‘You call this a car? What the heck did you just make? Why don’t you just dig a hole, and bury it!'”

Araki then spent about two hours explaining the reason for his outrage, saying that at first glance it was obvious that the car was “a compromise; an excuse for having had no previous experience.”

“As long as we continue trying a variety of measures in a project, each car we produce must constitute a learning experience that leads to the next step,” Araki said. “If a car doesn’t lead to greater experience, we might as well not build it. I was so disappointed that they hadn’t put more passion into the project.”

“The team members were deeply shamed and mortified.”

“The shame and regret the members experienced at the LPL’s outrage after seeing this vehicle became the motivating force behind ideas and inventions for the future development of electric vehicles.”

I mean, that converted Civic prototype, called the Clean Urban Vehicle 4 (CUV-4) was, charitably, garbage. With lead-acid batteries the thing only had a range of about 30 miles, and the packaging, as you can see in that diagram up there, sucked.

I can’t think of another time I’ve read anything this stark and brutal from a carmaker’s own mouth. Shame, regret, mortified, chucking a car into a hole – hot damn, this is some spicy stuff for the normally eye-rollingly upbeat world of what car companies write about themselves.

And, even if Honda isn’t quite the go-to name for EVs just yet, the unflinching harshness did pay off in innovation, as was seen in the car that was the direct successor to all of the shame and mortification: the 1997 Honda EV Plus, which was the first commercial EV to be sold that didn’t use lead-acid batteries – sure, General Motors’ EV-1 got to market in 1996, but it used those heavy, old-school lead-acid batteries at first, where the Honda used the then-new nickel metal hydride (NiMH) batteries. The EV-1 switched to NiMH batteries in 1999. 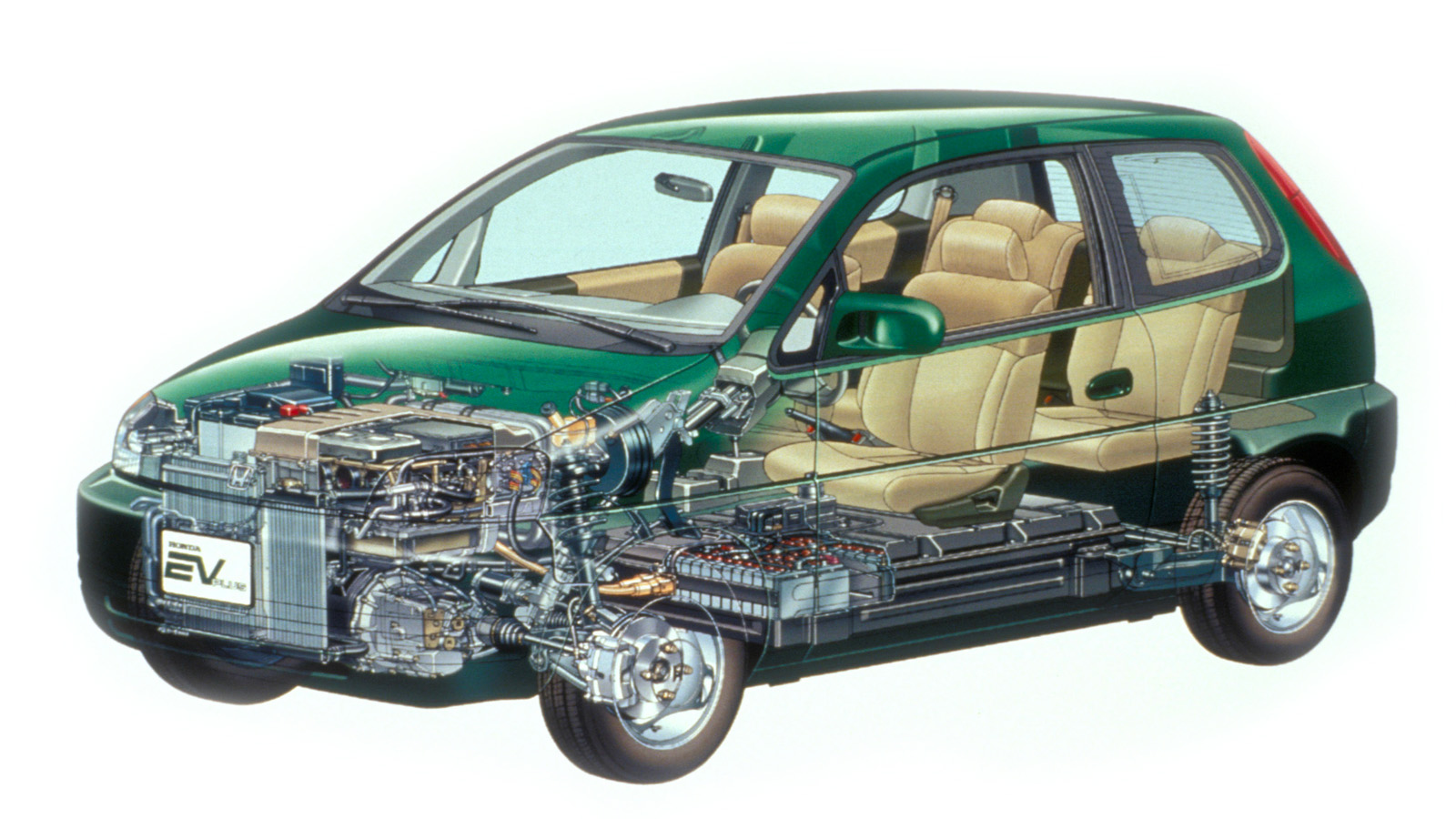 The Honda EV Plus also was the first to really define the layout that almost all modern EVs use today (though it’s fairly logical, really): pack the batteries into the floor of the car. The strange, kinda-tall look of the EV Plus was due to the fact that its kinda thick NiMH battery pack was set low, under the floor of the passenger compartment, just like it is on something like a Tesla Model Y or VW ID.4 or even Honda’s new Prologue, built on GM’s platform. This was the template for all future EV design to follow, and, significantly, even GM’s EV-1 didn’t do it like this.

I just have to hand it to Honda for not just its early technical achievements in EVs, but for having the corporate ‘nads to tell the whole story, and show how sometimes making something that is so unignorably crap is what has to happen to get people motivated enough to make something that’s actually good.

I'm a co-founder of the Autopian, the site you're on RIGHT NOW! I'm here to talk to you about taillights until you cry and beg me to stop, which I absolutely will not. Sorry. Hug? Also, David's friend.
Read All My Posts »
PrevPreviousYou Can No Longer Buy A Ford Maverick For Under $20,000. Here’s How I’d Order A 2023 Model Anyway
NextThe New 2024 GMC Sierra HD Dives Further Into ‘Cowboy Cadillac’ TerritoryNext