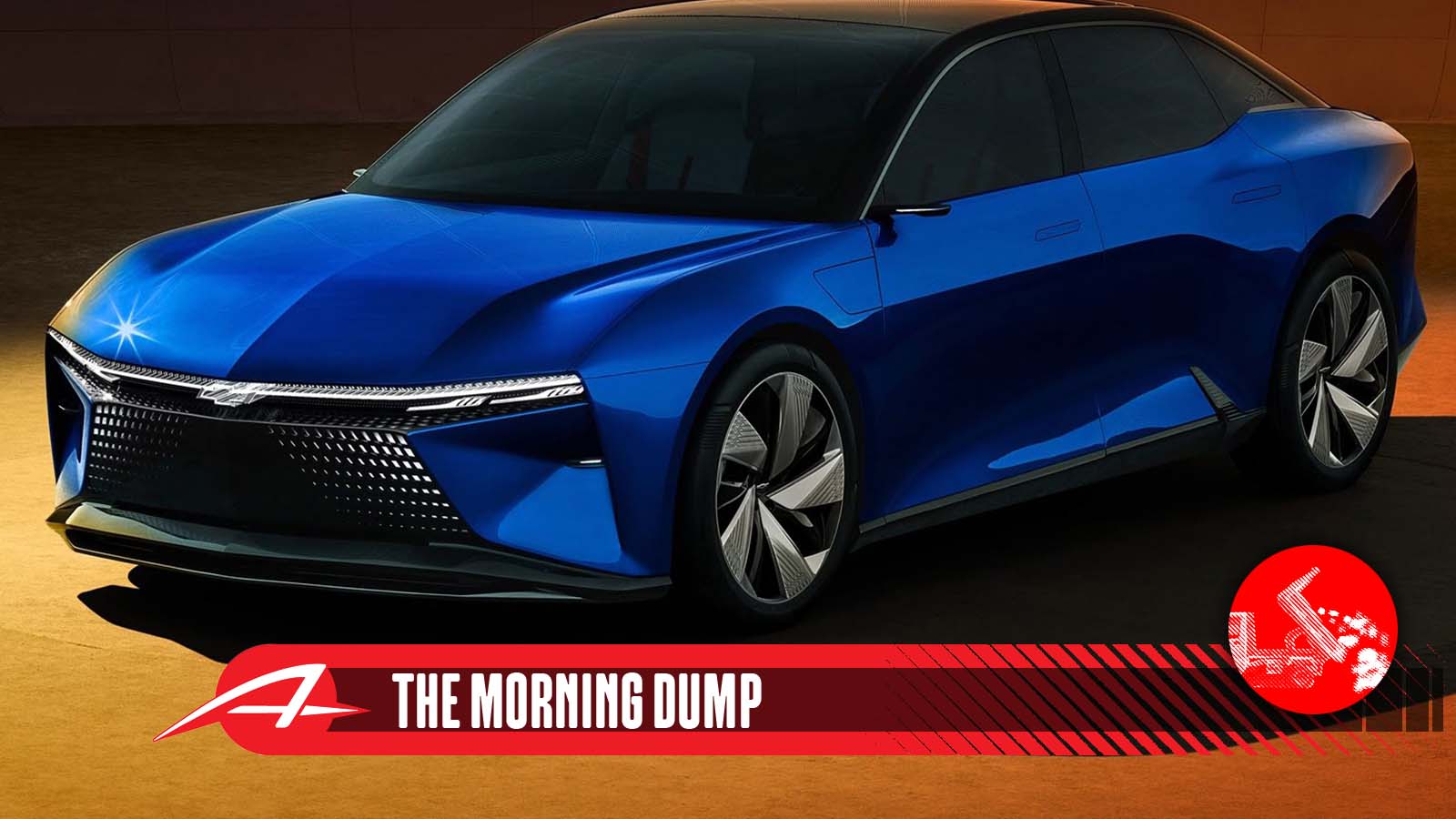 On today’s Morning Dump we’ve got Chevy’s first EV sedan concept, news that GM is servicing Teslas, a bad Ford recall, and an update on Carvana.

This Is The Chevrolet FNR-XE Concept

At its core, Globalization is the idea that the world shouldn’t be treated as a bunch of smaller markets, but as one big, mostly borderless place. A company mines bauxite in Australia and ships it to Iceland to turn it into aluminum wire and then that wire gets sent to Slovakia to make a Porsche that’s exported to Cleveland. It doesn’t make immediate geographical or logical sense but it makes economic sense and it works until it doesn’t.

Because cars are such complex objects, both in terms of production and marketing, there was a long period of history where cars were often made for specific geographies on specific platforms. Volkswagen tossed this idea out the window when it created the MQB modular platform and basically told its many sub-brands that their new small cars were going to share parts and the same general underpinnings.

Oh, time for a Seat Leon for Spain? Good news, it’s gonna be MQB. A Skoda Superb for the Czechs? Congrats, you get an MBQ. A Volkswagen Magotan for China? **OPRAH VOICE** YOU GET AN MQB!

There’s still a key piece here, though, which is that all of these cars were still very much marketed and packaged as individual cars for individual markets. Even if cars were shared across markets, they’d show up at different times. I already called out “Boundless” in the book gift guide last week, but there’s a great aside where newly-minted Nissan CEO Carlos Ghosn finds out that the company was debuting cars in Japan 18 months before they debuted in the United States, by which time they were already old. Nissan’s proposed solution was to just delay the Japanese cars by 18 months, which did not go over well with the new boss.

I mention all of these because the car above is not initially described as being for the United States. This is the FNR-XE, and it debuted at Tech Day 2022 in China and previews a new car to be sold there. InsideEVs has a good write-up explaining it:

No specifications are available yet, but Chinese media speculate the FNR-XE is a Tesla Model 3-sized compact sedan closely related to the 2024 Chevrolet Equinox EV. Local reports also claim that a production model for the mass segment inspired by this concept will debut in China next year.

Unsurprisingly, it’s based on the GM Ultium platform that also underpins the 2024 Chevy Equinox EV and, yeah, at that size a Model 3-ish competitor makes sense. It also makes sense from a price perspective, given that GM thinks it can sell EV Equinoxes here for $30,000 (to start at least), which means it could be competitive with NIO and BYD in China.

If this was 1998 we’d all say “Neat!” and move on because we’d know that the Chinese version would be nothing like what we’d get here. I don’t think that’s the case anymore. This is the first electric sedan from Chevy (and, arguably, from GM, given that the Cadillac Celestiq is barely a sedan).

The design language is all there. If I just lied and said this was the new Chevy Malibu (or Chevy MalEbu or whatever) would you have believed me? GM launching its next generation EVs with trucks and crossovers and the like shows that GM is listening to to customer demands (and building very profitable things first), but the success of the Model 3 can’t be ignored and sedans are great platforms for the technology.

Also, Tesla’s Model 3 has been around mostly unchanged since 2017 and, while it still looks good, it doesn’t look new. This looks new and, in my opinion, better.

In the end, the first Chevy EV sedan in the United States might look radically different, but don’t be surprised if it’s quite similar.

[Editor’s Note: I don’t agree that this looks better than modern Teslas. I do think Teslas are a bit dated, design wise, but this concept feels like it could have come from 2010. Or am I being harsh? Also, Jason wanted me to mention the Electrovair Chevrolet sedan from the 1960s. -DT]

This is anecdotal, but people I know with Teslas have had longer-than-normal wait times for service and this is backed up by the Tesla Motors Club forum. You know who seems happy to service those cars? General Motors. There’s an interesting piece from Automotive News that outlines how this happens:

GM President Mark Reuss said this month that the company’s retailers had fixed 11,180 Teslas over the past two years. He didn’t say what types of repairs were performed, though much of it was likely routine maintenance.

Reuss attributed the business to GM’s dealership network being more convenient and more experienced than Tesla’s.

“That’s a growing business for us, I’ve got to say,” he said during a presentation at GM’s investor day event in New York. “It’s a new business, which is great. Those customers brought their vehicles to us for service because they know we know and we have the expertise to fix them. They know that we have the customer service experience that they also want. And they know that we have the service bays and the dealerships in place.”

I have crossed paths with Reuss and therefore can picture the giant smile he probably had on his face as he said this. Being able to offer a good experience to your competition’s customers as you launch cars directly targeted at them is about as good as it gets in marketing.

Let’s Check In On Carvana

It’s Monday and that seems like a good time to check in on Carvana again. Between the lawsuits and the questionable securitization of its loans, the once rapidly expanding used car dealership network has hit some trouble.

We’ll check back in a week and see if the news gets better or worse.

Ford Is Recalling 634,000 Bronco Sports And Escapes Over Fire Risk

If you have a 2020-2023 Ford Escape or Ford Bronco Sport with the 1.5-liter, three-cylinder engine you might wanna read this press release from Ford and schedule a dealer appointment ASAP.

When the engine is operating, a cracked fuel injector could cause fuel and/or fuel vapor to accumulate near hot surfaces, resulting in a potential under hood fire.

Ford is taking steps to minimize the inconvenience for customers, including providing an option to arrange for free pick-up, repair and delivery, in addition to owners taking vehicles themselves to Ford dealers.

Not fun. Ford will update your engine control software so you get a warning if this happens, will install a tube that drains fuel from the cylinder head and away from hot surfaces, and will check to see if your motor smells like a bunch of fuel.

The company says you can keep driving just, you know, get this fixed as quickly as you can.

Is it a good or a bad thing that cars are becoming global? Are you excited about the prospect of finally getting your hands on cars that were once only for foreign markets (bring us the Honda E you cowards!) or are you bummed that, even if you can’t easily access these vehicles, that they won’t exist? DEBATE!

Howdy! I'm the Publisher of The Autopian which means I'm to blame for at least a small part of this. I used to run another car site and then made movies and TV shows. Now I'm here to convince you to buy a Peugeot.
Read All My Posts »
PrevPreviousLet’s Do Old Trucks Again: 1979 Ford F100 vs 1982 Chevy C10
NextThis Company Wants To Sell You A Million-Dollar Luxury Mobile-Command-Center RVNext