Cold Start: Is This Lavender?

The M-Body (1977-1981) Chrysler Le Baron was, at least from my memories of the era, which is pretty much all I have to go on, since these are now all but extinct, a pile of chromed crap. These cars used the same platform as the (F-Body) Dodge Aspen, but with a different body, and were about as good as you’d imagine a Dodge Aspen with more velour to be. More importantly for today, I just want to know what the hell color I’m looking at here in this 1980 brochure. Is that lavender?

As much as I’d love to, I can’t recall ever seeing a lavender LeBaron out in the wild, so I think this just may be a combination of poor color printing fidelity, scanner color fidelity, age, and, oh, Mercury being in retrograde or some shit. 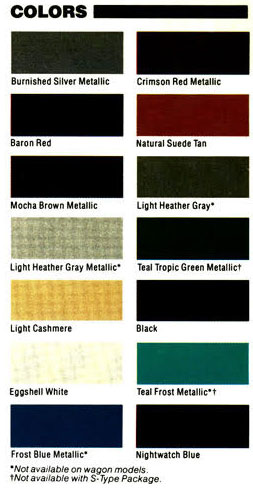 If we look at the list of available colors, I don’t see any that look like a metallic lavender. Even if we look for colors that may have been poorly reproduced, it’s still hard to figure out. The white? Ehhh, I don’t think so. Maybe that Light Heather Gray Metallic – actually, that’s probably the one, but I’m going mostly by name and brightness, as it looks like a bruise-green here.

But, none of this can stop you from imagining a lovely metallic lavender – perhaps even periwinkle – LeBaron if you so choose.

I'm a co-founder of the Autopian, the site you're on RIGHT NOW! I'm here to talk to you about taillights until you cry and beg me to stop, which I absolutely will not. Sorry. Hug? Also, David's friend.
Read All My Posts »
PrevPreviousA Trained Designer Imagines What A 1980s Checker Cab Could Have Been Like During New York’s Shittiest Era
NextDodge Daytona Turbo Z or VW Quantum GL-5: Which RADwood Rarity Would You Rather Repair?Next