Even today, if you ask people to imagine a New York City taxi, the image that will pop into their heads is very likely to be a Checker Marathon, a vehicle that has been extinct for decades. Sure, some younger people might imagine a Crown Vic, but when it comes to iconic cabs, the Checker is still the image burned into our brains. This is all the more incredible when you remember that the Checker Marathon was in production, virtually unchanging, from 1961 to 1982. That’s also why The Bishop, our own Autopian contributor who was trained as an auto-designer but who now does Other Design Things, has spent so much time imagining what would have happened if, somehow, Checker had managed to get its shit together enough to design a whole new taxi using all of the technological advancements of the 1980s.

Keep in mind, in reality (not the alternate reality that we’ll get to in a moment), Checker actually did realize that at some point it would have to finally update its ’50s-era design to something more modern, and experimented with some all-new, more efficient, more modern Checker cab designs in the late 1970s, using a stretched Volkswagen Rabbit and similarly-elongated Chevy Citation as bases. Check also tried designing a new cab from scratch (well, Checker-scratch, which meant liberally borrowing mechanical components from all of the Big Three) called the Galva (middle bottom): 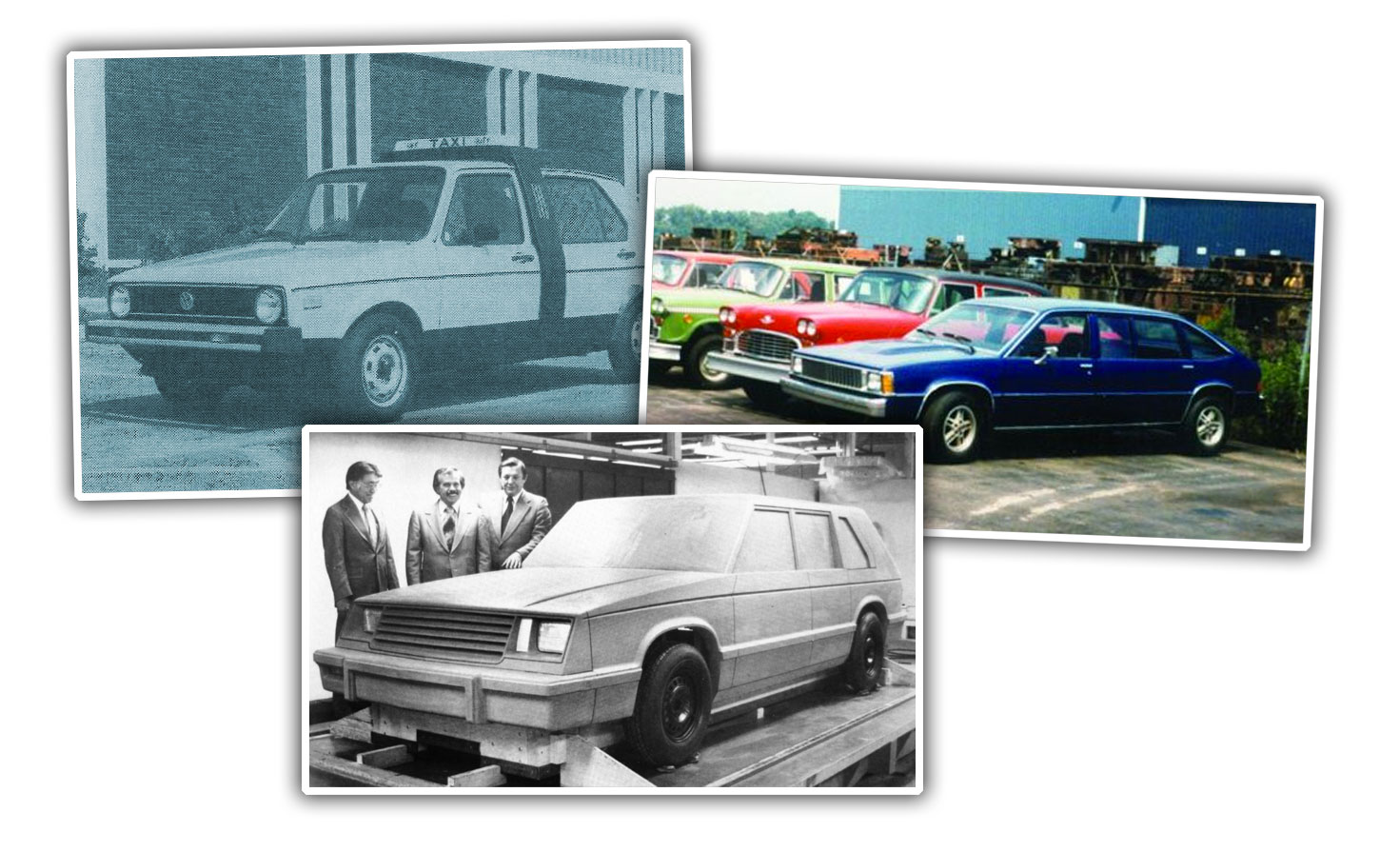 The VW and Citation options were found to be unsuitable as cabs for a variety of reasons, because being a city cab is a very specific combination of ruggedness, roominess, ease and economy of repair and maintenance, and a general willingness to withstand abuse, all while hauling around a lot of people and a lot of stuff. The old Marathon, while severely outdated, was rugged and roomy and well-understood.

The internal Galva project was highly informed by decades of practical experience working with taxis, and had features like cheap, easily replaceable flat-glass windows and possibly plastic, easily removable fenders and hoods. There were solid ideas, but Checker wasn’t in a position, financially or otherwise, to pull off a project of that scale.

That’s where The Bishop comes in, full of ideas and the grand benefit of not having to deal with reality to make them happen. Our Bishop imagines a reality where Checker actually did manage to pull off a new taxicab design — one based on the lessons the company learned, and one that is clearly derived from their Galva project experience.

And, speaking of reality, let’s take a moment to remember what mid-’70s to early ’80s New York City, the native land of this cab, was like: a craphole. A dirty, crumbling craphole where everyone seemed to be incredibly pissed off all the time. The opening scene from the 1976 movie Marathon Man I always felt kind of encapsulates what the perpetually-pissed streets of NYC were like:

So, here’s the car The Bishop imagines for The Next Checker: the Millenium. 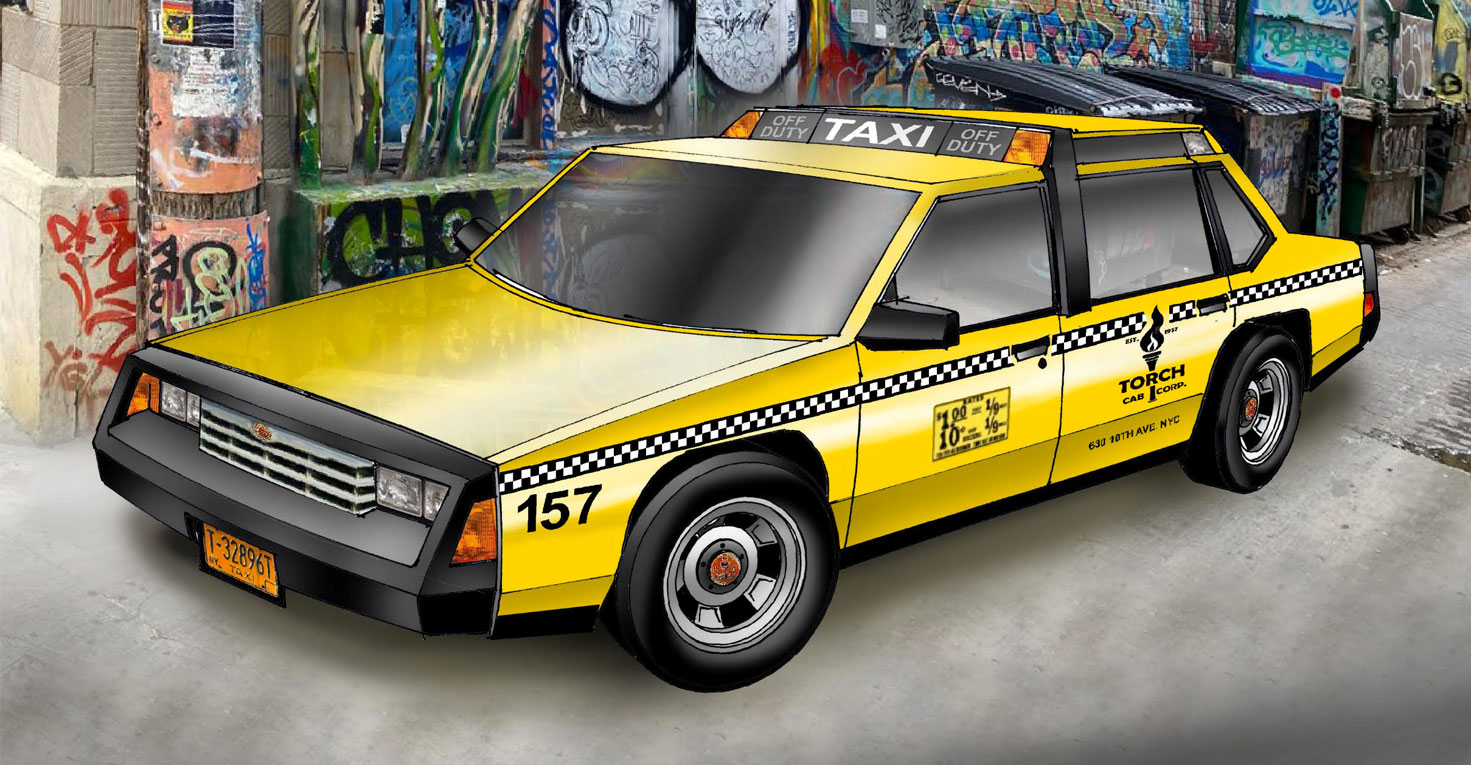 Built on a GM 1977-1990 B Body (like the Chevy Impala) or C Body (Cadillac Fleetwood) chassis, Checker could leverage GM’s industrial might and avoid the hassle of developing its own platform. Here’s how The Bishop describes it:

The 1983 Checker Millenium would be so named to evoke a cab design that could make it from 1983 to past the year 2000, which the Panther chassis cars ultimately did.  The issue of styling getting dated would be solved by giving the car essentially no styling at all which really means a form-follows-function box (Volvo, Talbot Tagora, the B Body Impala itself).

While a hatchback/wagon makes the most sense for maximum space, there is some kind of unwritten rule taxi/limo rule that passengers want to be seperated from their cargo…smelly wet suitcases should be neither seen nor sniffed.  The New Checker would be a sedan with a slight wedge shape front to back for a large trunk (sort of like they did with the criminally underrated design of the Leyland P76 which can hold a 55 gallon drum in its boot). 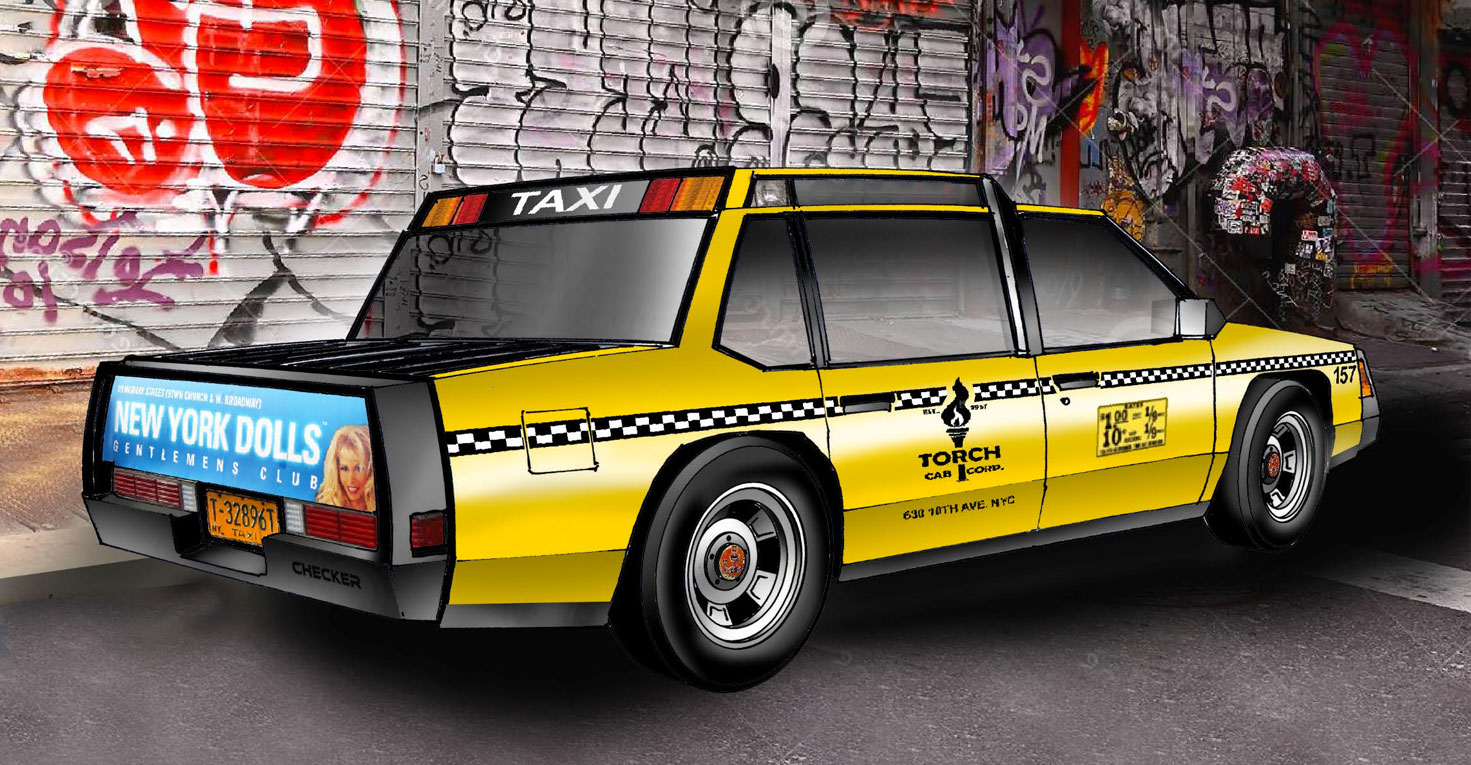 The boxy body there is actually hiding an awful lot of really clever taxi innovations:

Note the elevated rear roof for maximum headroom and that features built-in TAXI/OFF DUTY lights, plus repeated turn signals front and back (plus repeated brake lights in the rear).  Above the rear quarter window, built in spotlights would provide illumination in super dark suburban locations or shine on house numbers.  Those are taillights off the by-then discontinued 1982 Malibu ….note the cutout window in the bumper for side marker lights.

The sort of targa-bar looking thing on the B pillar houses tall, skinny mirrors for passenger to look into so they do not open their door onto a moving bicycle or something

You have to take into account people that might have lots to carry, so there would be a luggage rack on the trunk lid (maybe with retracting straps?).

Of course I’m a huge fan of the dual-taillight setup, which really would be useful in this car’s native habitat of bumper-to-bumper traffic, and those tall mirrors on the B-pillar are an absolutely brilliant idea that probably could have saved so many cyclists from taking a cab door right to the face. 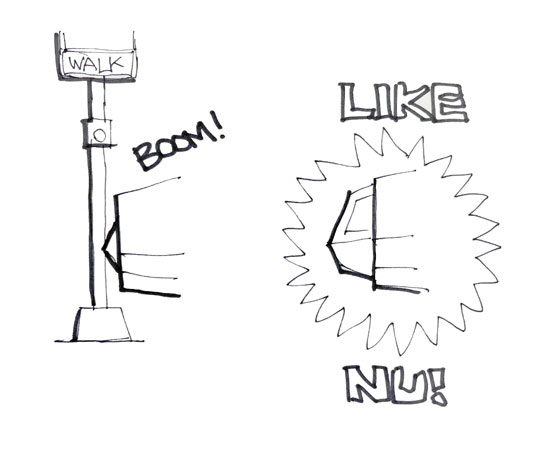 Those big rubber bumpers, looking a lot like the experimental safety cars of the 1970s, are designed to really deal with the misery of big city life, absorbing impacts and self-restoring, like the 5 mph bumper standards of 1974 demanded, anyway.

There’s a lot in this design that’s very specific to the brutality that taxis face, so body parts should be cheap and easy to replace:

“Note the seam above the rear fender..all fenders are bolt on components.

No wheel covers, of course..they’d just end up being stolen or in the bushes at the end of that turn near the Holland Tunnel.

The side and back glass is flat (windshield could just a GM B Body piece), BUT the frames it sits in is slightly curved and painted black to give the illusion of curved side glass.  Checker would have needed to keep costs down, and flat replacement glass would not only cost less, but it makes it easier to retrofit the panels with ballistic material if needed (add some teargas dispensers, primitive run flats, land mine floor plates and we’re ready for a security force of a third world despot).

At the back the bumper does not make a full loop since the trunk lid is there, but a built-in illuminated banner above the taillights would make some ad revenue from gentlemen’s clubs and be easy to change out.  It’s not like you need to access a keyhole since the trunk (and both rear doors) could be solenoid released by giant buttons up front.”

That luggage rack The Bishop mentions has an even cooler element to it, too: 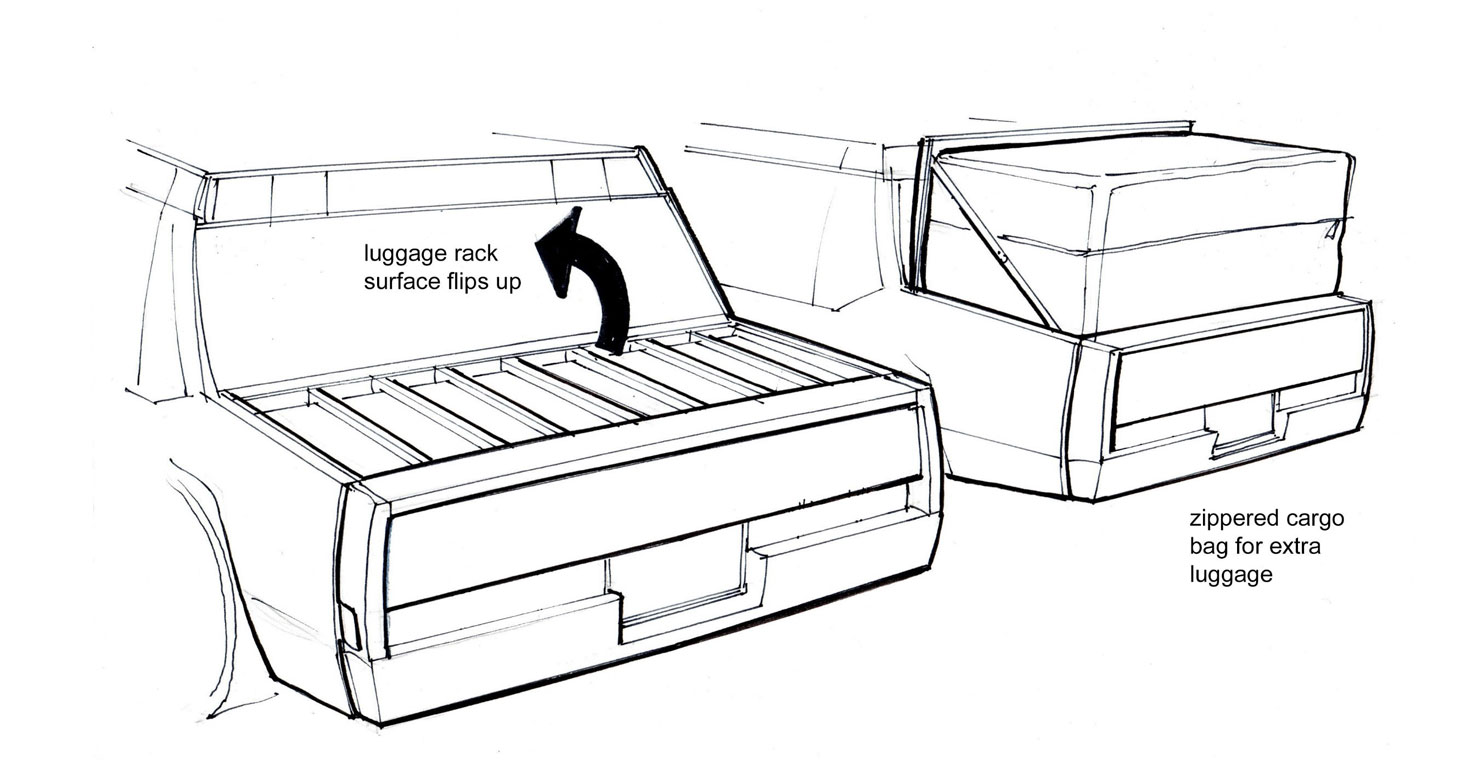 Look how clever this is:

Also, the luggage rack surface lifts up (but the trunk stays closed) to reveal a soft, zippered cargo carrying case (like a roof cargo bag) for emergency use to effectively double the carrying capacity of the cab (but still separating the luggage from the passengers).

I love that. Simple, but effective for occasional over-loaded luggage use, even if it’d cut into rearward visibility.

Checker would be building the bodies for these, and as such would be quite different from what GM was building for these chassis on their cars. For example, they’d have the raised rear roof:

“The elevated roof allows for an elevated rear seat, which means less space needed for legs and more floor space for jump seats.  Honestly, the rear space would be smaller than a Marathon so the driver might need to slide his seat forward if he is carrying four or five large people in back…but that would be such a small part of this car’s use that it should not rule things. “

The Bishop has also imagined some different-length wheelbase versions and a wagon version, all of which parallel variations of the Marathon Checker made over the course of its working life: 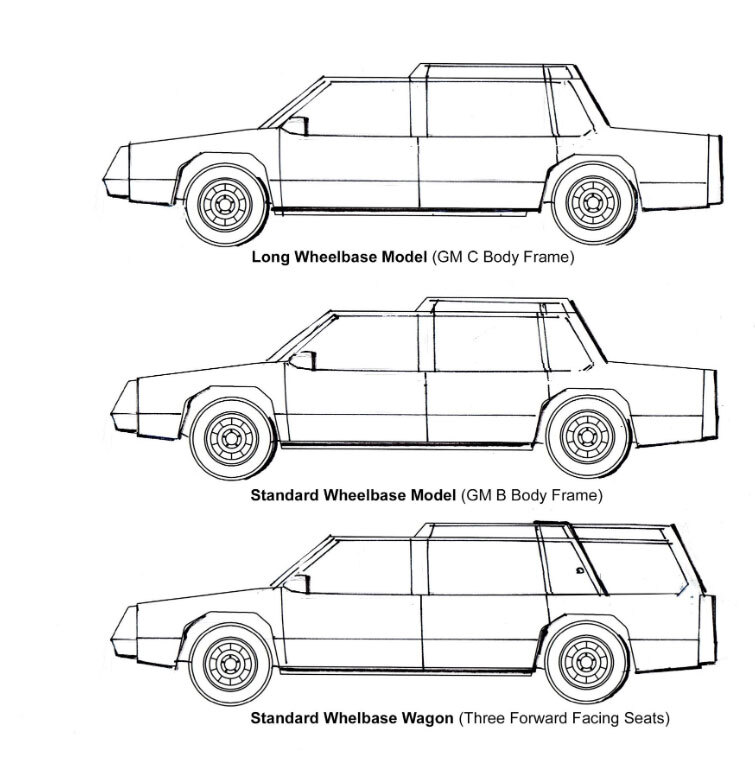 The interior also reflects the grim reality of the time and place, and is designed accordingly: 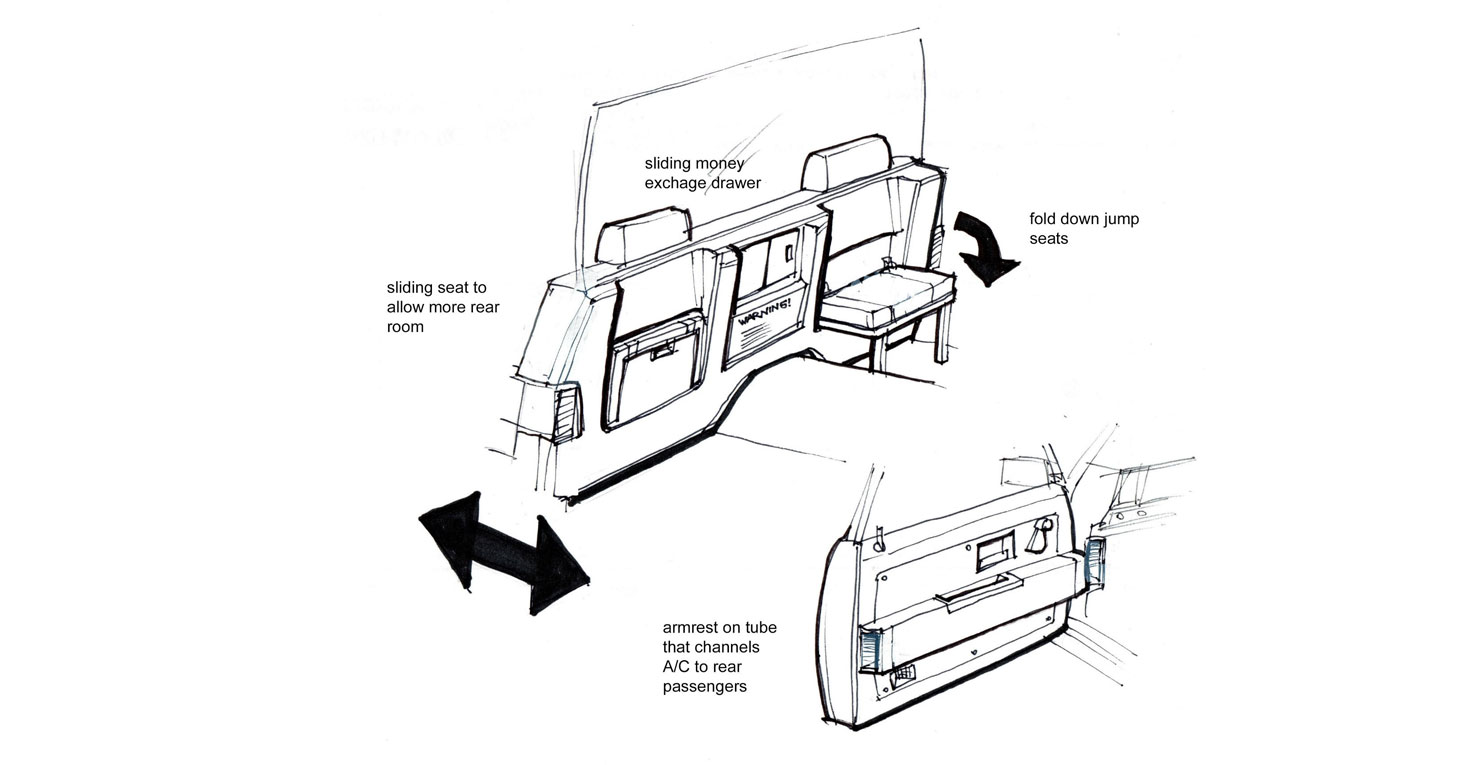 “Note the sliding money exchange drawer (be aware…the KFC near Pratt in 1987 had 1” thick plexiglass at the counter and a turnstile where you placed your money and then got your chicken spun around to you).

The front door armrests are actually ‘tunnels’ to channel A/C to the rear passengers (which leaves a void where drivers would likely be bound to hide a billy club, pistol, etc.)”

While most of the dashboard and instruments would be stock parts-bin GM stuff, Checker would also include a taxi-specific Checker Command Center on a positionable arm: 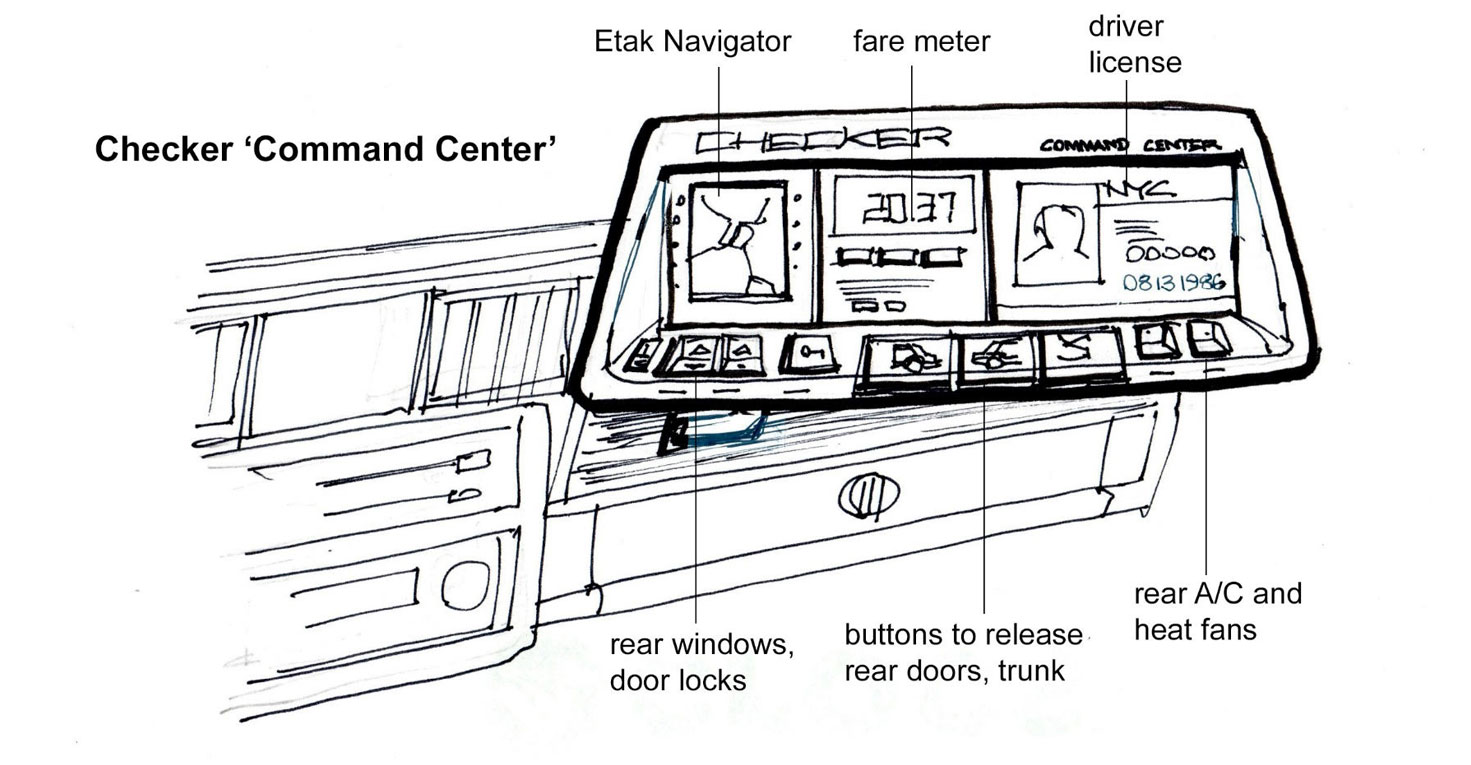 This pod would include the expected fare meter, buttons to open the solenoid-actuated rear doors and trunk lid, rear A/C controls, rear window/lock controls, a display area for the driver’s Taxi License, and even an optional installation of an Etak Navigator, the first commercially-available nav system for cars, first released in 1985. Here’s a little video of what the system looked like, in all its green-phosphor vector goodness:

The Etak Navigator was actually bankrolled by Atari founder Nolan Bushnell, for an extra little bit of ’80stastic trivia.

I have to say that of all the what-if, alternate-world car scenarios The Bishop has given us, I feel like this one could have been the most successful. If Checker had been in just a bit better of a financial position, a rugged, well-thought-out, highly purpose-designed vehicle like the Checker Millenium could have actually lived up to its name, keeping Checker the default choice for cabs well into the early 2000s, when they’d likely have to consider a new, more fuel- and emissions-efficient update.

Of course, New York became a more gentle place in the 1990s and later, so perhaps the almost brutalist utility of the Millenium would have seemed out of place. Or, perhaps it could have become a design icon like its lumpy ancestor?

Our reality prevents us from ever knowing, but I can say I’d find a Checker Millenium to be a welcome safe, wheeled haven in the alternate-universe 1980s New York shithole.

I'm a co-founder of the Autopian, the site you're on RIGHT NOW! I'm here to talk to you about taillights until you cry and beg me to stop, which I absolutely will not. Sorry. Hug? Also, David's friend.
Read All My Posts »
PrevPreviousI’m Mercedes And I Own Somewhere Between 17 And 19 Vehicles (Including A Bus)
NextCold Start: Is This Lavender?Next