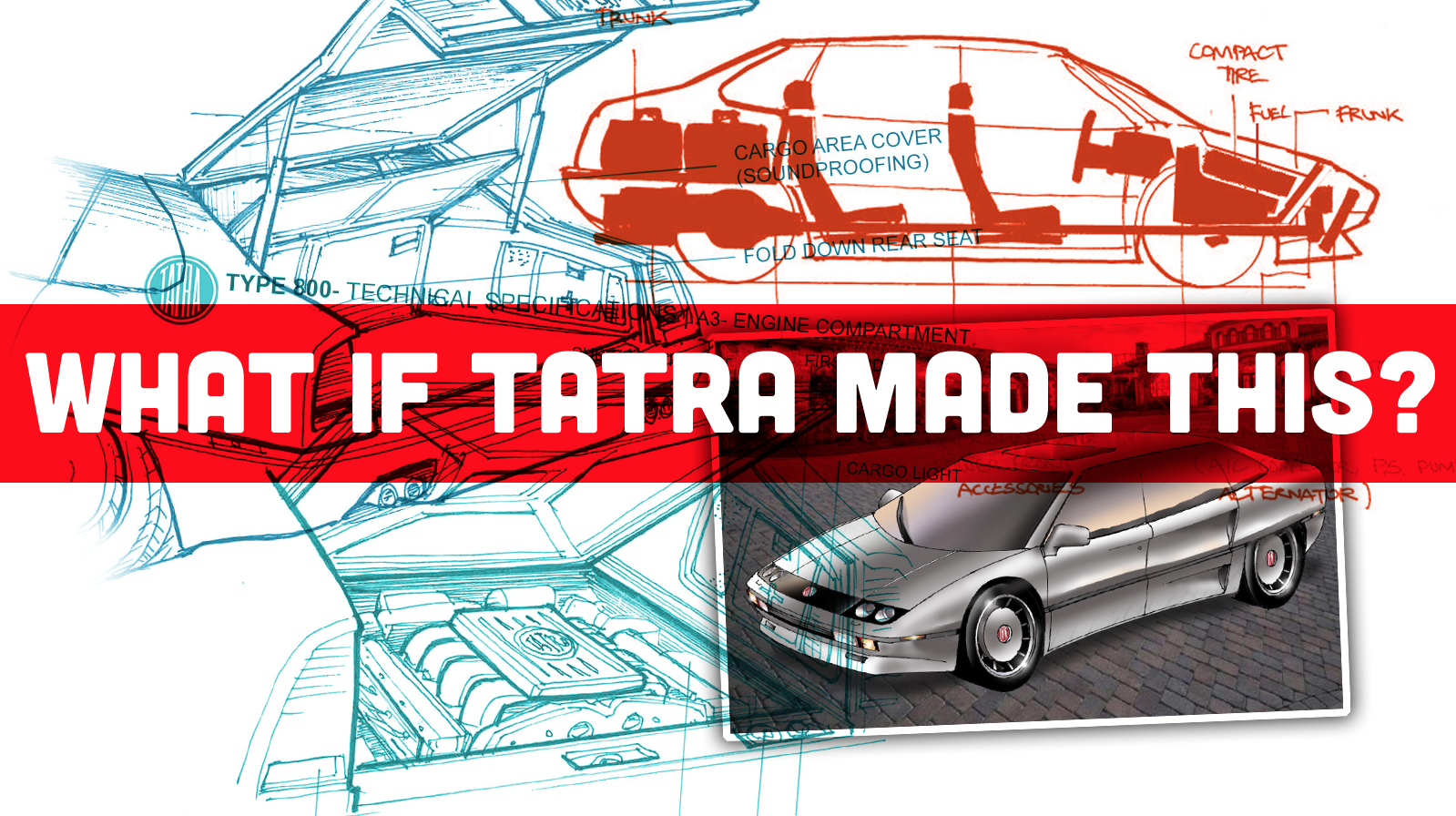 Last week I introduced you to one of my favorite automotive-weirdness resources, a recluse who we only know as the “Bishop of Automotive Arcana,” and his wonderful, fever-dream speculations about an alternate universe AMC. A number of commenters expressed a desire for more, more, more, and when Autopian commenters look at me with their big, glistening eyes, you know I can’t say no. So, this time, as a treat, I have for you The Bishops’ imagining of the car Tatra, in an alternative universe, released in 1989 — a car that leverages all of Tatra’s glorious Czech weirdness and revels in it. Join me, if you will, on this magical journey!

First, a little background. In case you’re somehow unaware of Tatra, then I might ask what website you were trying to get to that brought you here–was it Autopaint.com? If so, stick around, because this is all fascinating stuff.

Tatra is actually one of the oldest automakers in the world, starting in 1850 making wagons and carriages in the Czech town of Kopřivnice. The company moved to motorized cars and trucks by the 1890s, and by the 1920s Tatra was making some very technically interesting vehicles with opposed air-cooled engines and backbone chassis. 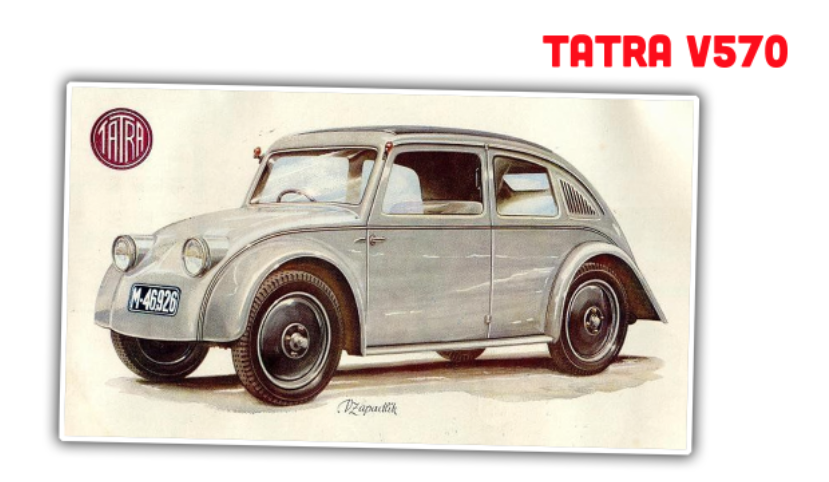 But what Tatra is best known for are its air-cooled, rear-engined cars, which started in 1933 with the V570 prototype, which, as you can see, is very much like a larval Volkswagen Beetle. In fact, after WWII, Volkswagen paid a settlement to Tatra, who held many patents on air-cooled engine configurations. 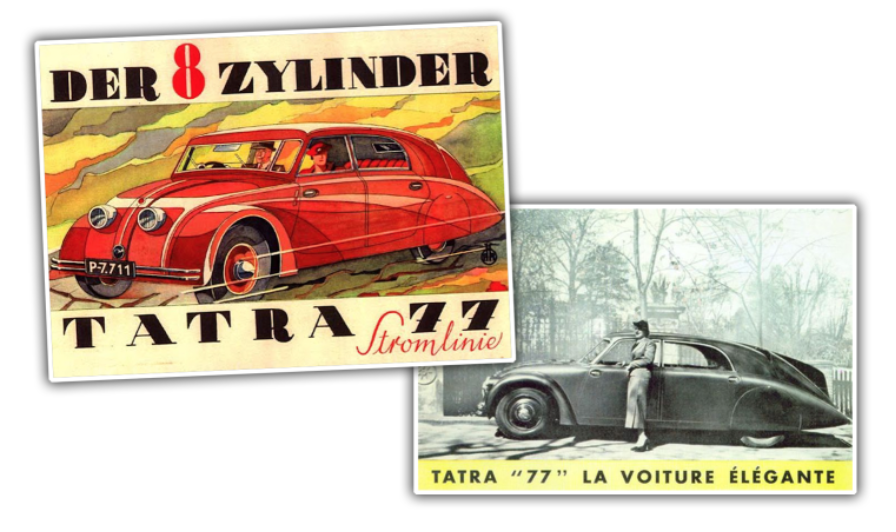 The V570 was a small car, but what actually made it to production was far more grand. Tatra’s first rear-engined, air-cooled car was the stunning T77, a colossal land-zeppelin of a car, with a big air-cooled V8 at the rear and a huge dorsal fin like a shark. It looked like nothing else on the road at the time, and started a line of big, luxurious, rear-engined Tatras. 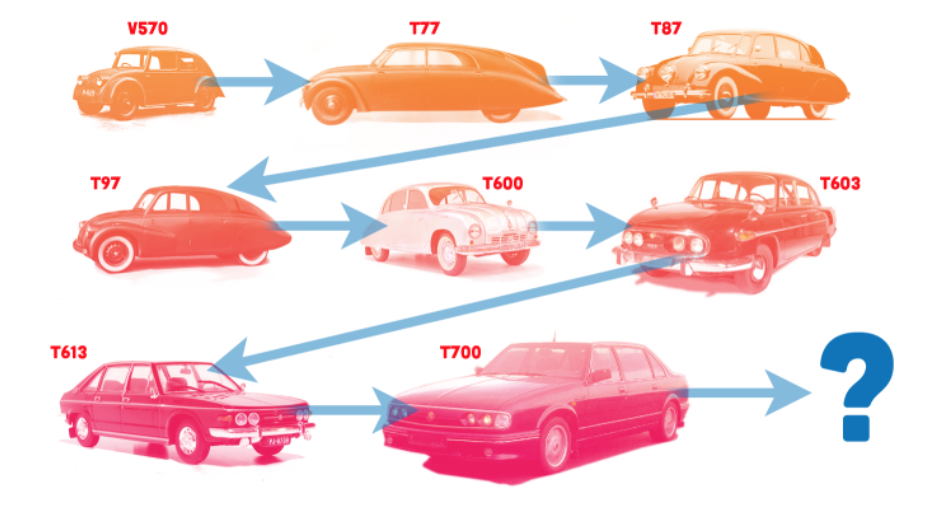 Tatra refined the T77 into the T87, then came out with smaller variants like the T97 and T600 Tatraplan. Then, as the company’s role became more about making limousines for upper-echelon Communist Party members, went back to big luxurious cars like the T603, T613, and finally the 1996 T700, which was the last of the big, rear-engined Tatra cars.

Tatra doesn’t make cars anymore (though it does make plenty of trucks), and when communism fell, so did much of the company’s market, with its post-Communism car, the impressive but doomed T700, only selling 75 copies.

It’s a shame, because no one else managed to refine rear-engined, full-sized cars to the degree that Tatra did, and the automotive world is poorer for this absence. I mean, at least I think so.

So, where our Bishop takes off on his alternate universe leap is after the T613, which was introduced in 1974. In this re-imagining in this alternative universe, we never ended up with the tepid T700 update of the T613. Instead, this alternate-history Tatra, emboldened instead of frightened by the crumbling of the Soviet Union in the late 1980s and early 1990s, decides to take their large, rear-engined philosophy boldly into this new era, intent on emerging into the post-Soviet world as a true competitor to Western cars.

To do this, the company would need the equivalent of a four-door supercar. And that’s what the T800 would be. 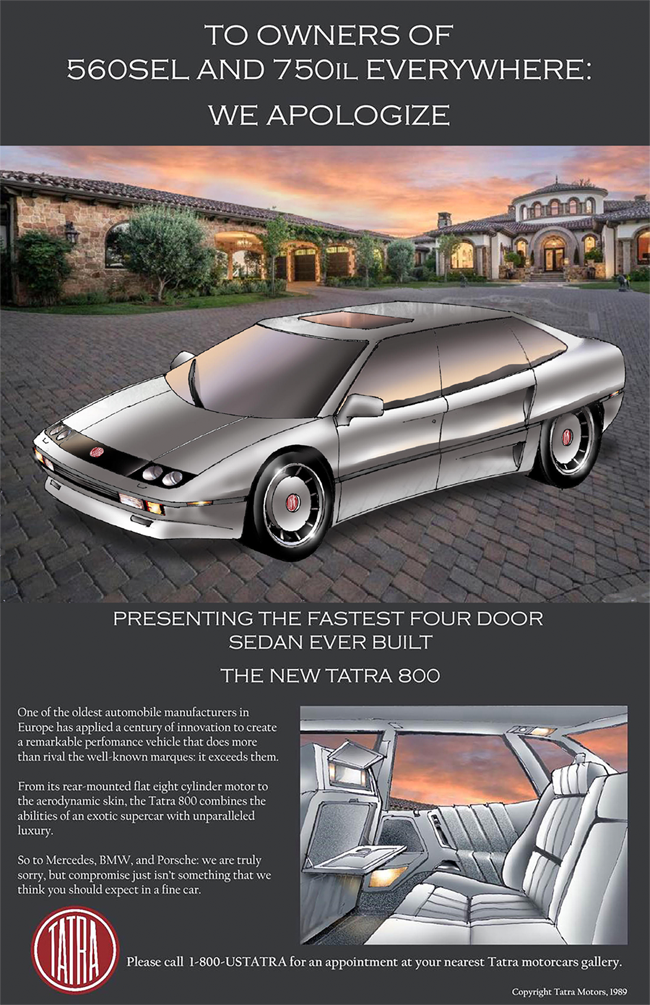 This is a pretty radical yet still evolutionary development of the Tatra design philosophy. The T613 was a good 15 years old in 1989, so an update was long due. Tatra would keep its signature rear-engine design, the general proportions, but instead of keeping a V8, the engine would become a horizontally-opposed flat-8, and the company would switch from air to water-cooling, much like Porsche would do with the 996 in 1998, and for much the same reasons: refinement, noise, and emissions.

The flat engine layout would offer some significant packaging advantages as well, as Volkswagen proved with their Types 3 and 4 cars, which could allow significant cargo areas at the front and rear, all thanks to packaging the engine under the floor at the rear.

In the T800, this would be used to provide a substantial rear hatch cargo area: 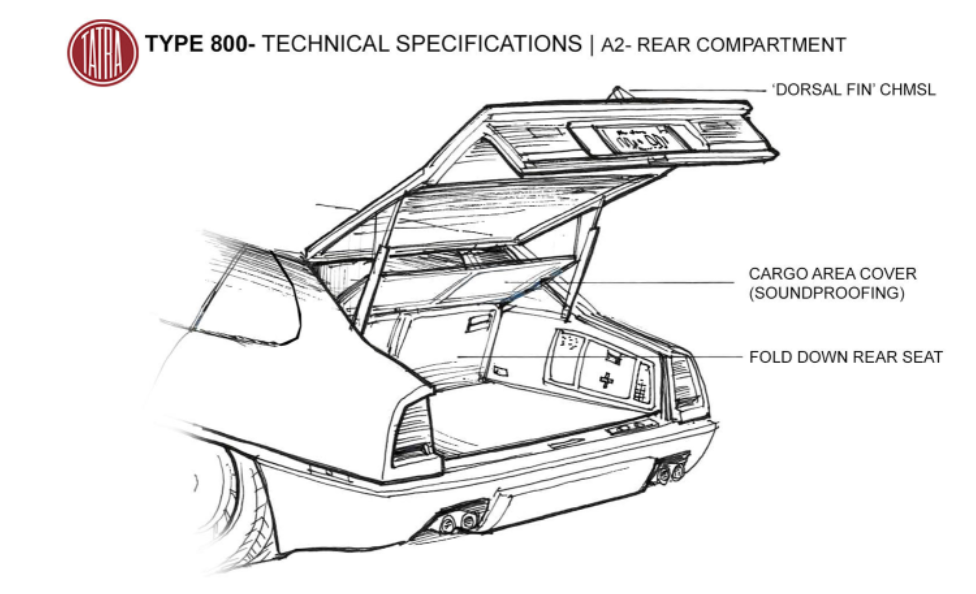 Also note how earlier Tatras with their large dorsal fins are referenced in the little fin-shaped center high-mount stop lamp (CHMSL). Engine access would be under a (hopefully well-insulated) rear floor hatch: 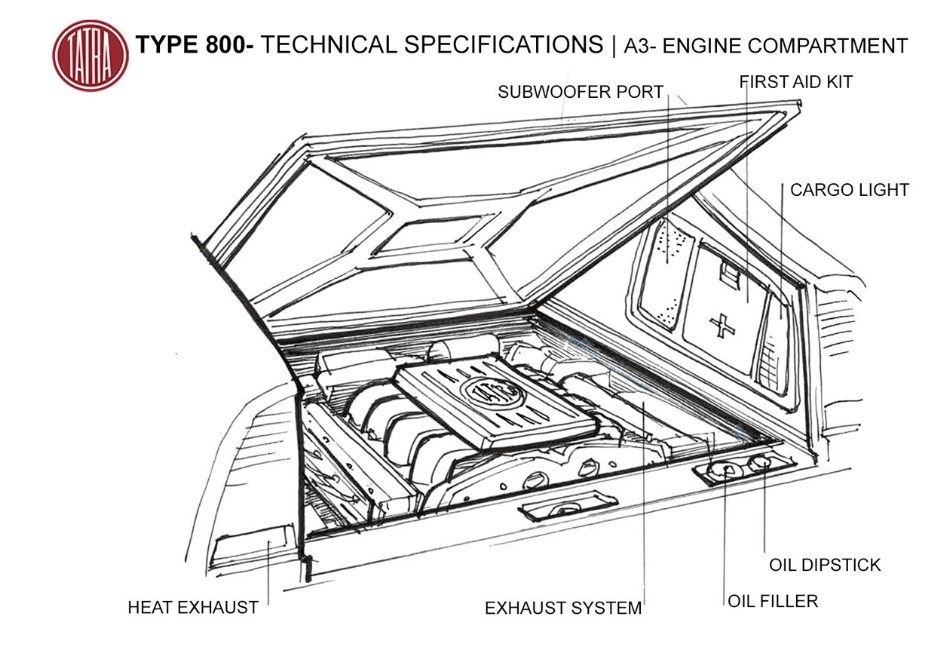 I know what you’re thinking (because you got the COVID vaccine, which broadcasts your thoughts): You’re thinking hey, that engine compartment looks too damn tight for everything! What are you trying to pull, here?

Well, relax, there’s an explanation here, which you can see in this cutaway diagram of the T800: 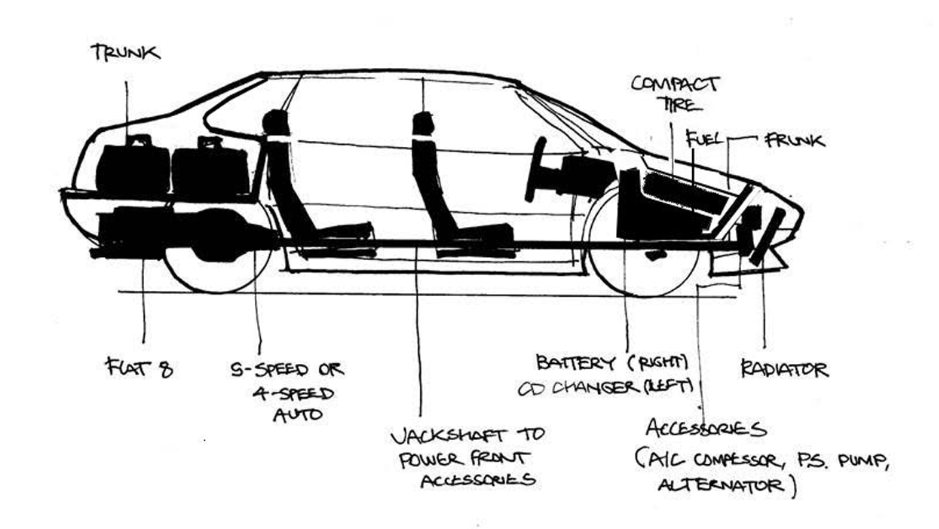 See what’s happening there? All of the accessory-drive parts–the alternator, water pump, power steering pump, AC compressor and so on–are mounted up front, and driven from the engine via a small power take-off shaft called an accessory driveshaft, or jackshaft.

This likely sounds familiar to you because it’s in your big notebook of printed-out David Tracy articles, where he discussed what is likely the most well-known use of a jackshaft, on the Toyota Previa. In this more exciting non-reality, the Tatra beat the Previa to market by a year, so, yeah, take that alternate-universe Toyota. 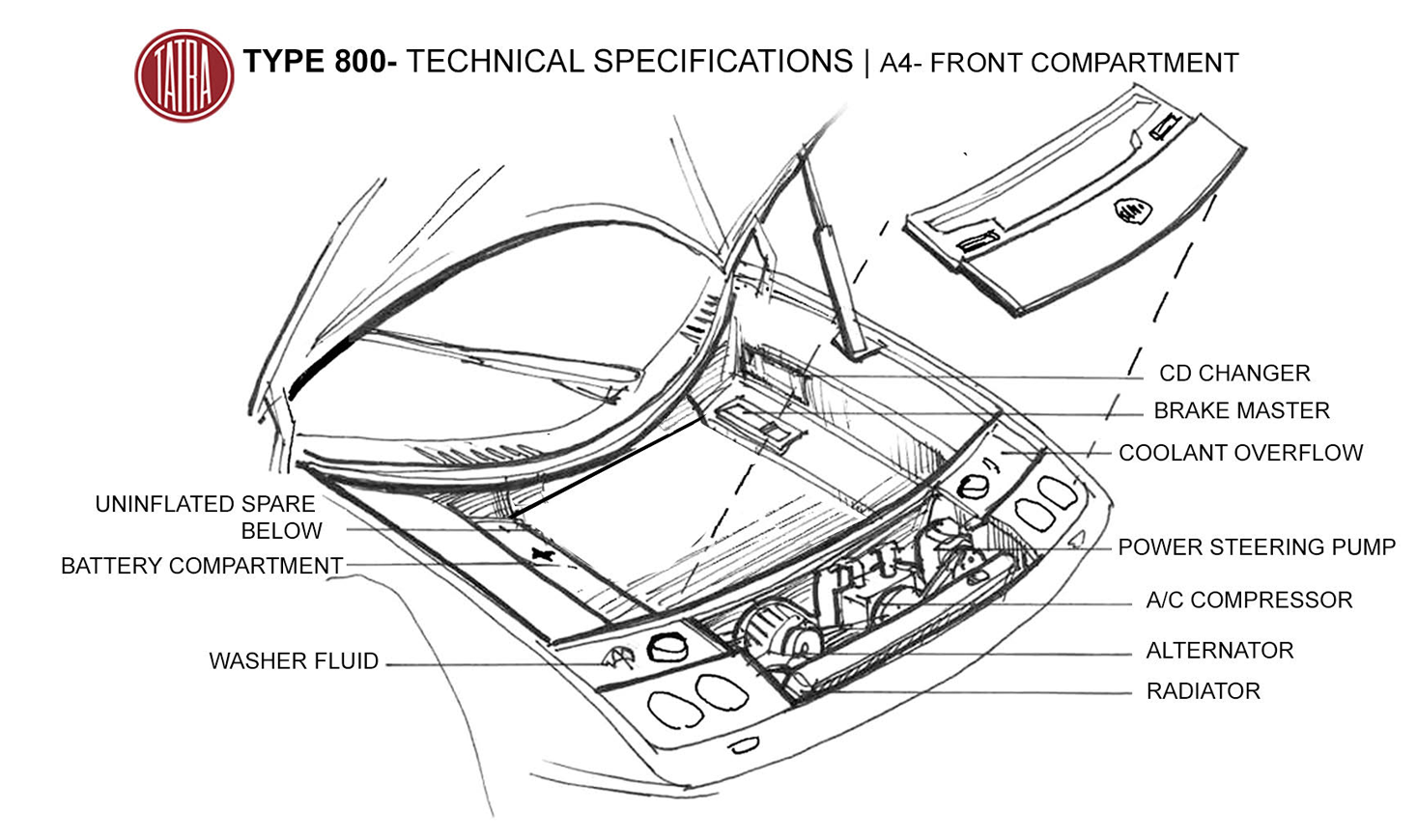 In the T800, the accessory driveshaft means a small area in the nose of the car would house the radiator, alternator, coolant pump, and so on, saving a lot of problematic plumbing to the rear of the car while still keeping the packaging tight, even to the point of allowing for a shallow front trunk.

Access to the front accessories would be via a removable panel, as seen above there.

This layout, with a very flat engine laid under the floor at the rear is one of my favorite automotive packaging solutions, yet it comes up quite rarely. Volkswagen had its Types 3 and 4, along with a prototype called EA266 that was a packaging triumph. Fiat’s 500 Giardiniera wagon and the Polski Fiat 126 Bis also pulled off this packaging trick, but hardly any full-sized cars gave it ago, at least until recently, when modern electric cars like the Tesla Model S essentially use this layout.

Let’s get back to our not-so-real Tatra, though. The interior was designed to mimic the odd, undulating dash of the T603, but completely late-’80s modern (Note: The steering wheel is removed to better show the dash): 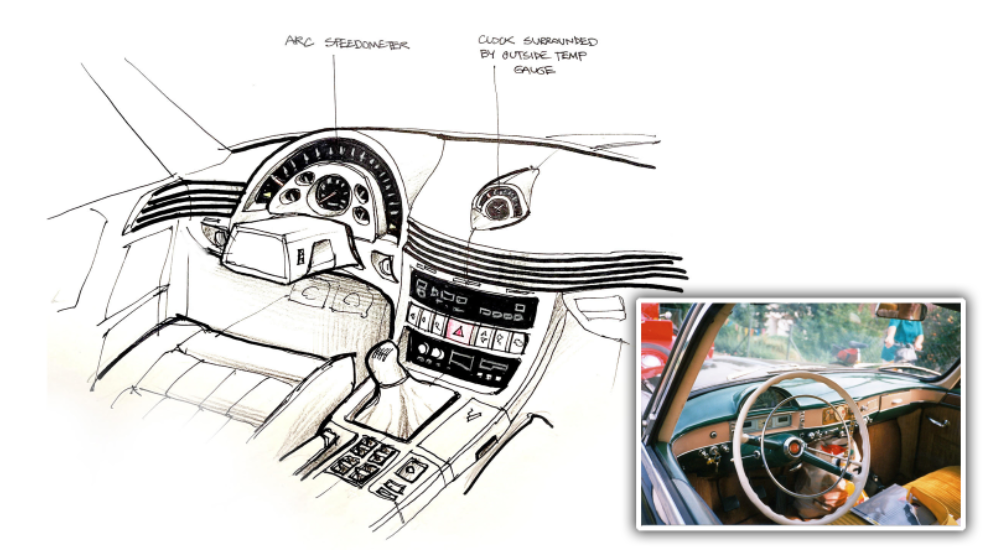 The speedometer is that huge arc, inset inside it are tach, fuel, oil, and temp gauges, and the motif is repeated on the center clock, which is under the arch of an outside-temp thermometer.

It’s all so very cool, I think, and if we look again at the exterior design 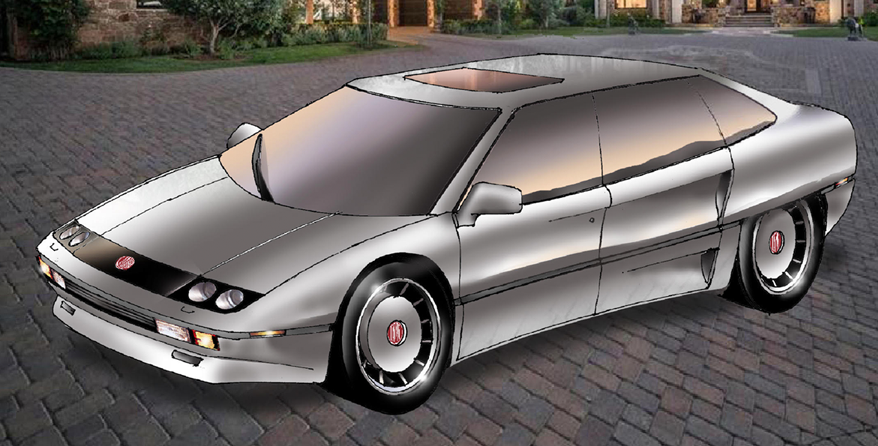 …we see some very ’80s design motifs, especially in that wedge-shaped front — a wedge permitted because the bulky engine is way at the other end. We also have supercar-style air intakes just ahead of the rear wheels, and the whole thing really feels like a four-door supercar that you could fold the seats down and haul bags of peat moss in, if you had to.

Now, even the Bishop, when reflecting upon his visions of this alternate-world Czech Czampion, is skeptical that a rear-engined four-door near-supercar from the Eastern Bloc could really have competed in the global car market. And, sure, that seems right from our universe’s point of view, but if we’re going to imagine alternate realities, why not imagine one were the Soviet Union fell, and the Czechs were somehow able to leverage that into a PR blast of goodwill for them, portraying themselves as a technological powerhouse crushed by the weight of the Iron Curtain, but now freed!

Maybe they could have gone up against Mercedes-Benz and BMW and Audi and Volvo and come out on top, by the sheer audacity and practicality of their designs? Maybe they would have continued refining, and then when the Dawn of Electric cars arrived, their platform would already have been so well suited to adapt to an EV, that a startup carmaker named after a pioneering electrical mind from a bordering Central European country to the Czech Republic would have picked the Tatra as a platform instead of a little Lotus, and today the most recognized name in EVs would be a Tatra-Tesla.

It could be an absolutely magical world, and I’d be lying if I told you I wouldn’t like to at least visit there.

I'm a co-founder of the Autopian, the site you're on RIGHT NOW! I'm here to talk to you about taillights until you cry and beg me to stop, which I absolutely will not. Sorry. Hug? Also, David's friend.
Read All My Posts »
PrevPreviousWhy I Sold My Beautiful ‘Stolen’ Jeep FC And Kept My Rusty Blue One
NextHow This Tiny Car Led To The Creation Of The Famous Whac-A-Mole Arcade GameNext