Facebook-f Twitter Instagram Rss
Menu
Menu
Home » Dodge Is Bringing Back The ‘Hornet’ So Let’s Look At Every Car That Ever Had That Name. There Are More Than You Think.

Dodge Is Bringing Back The ‘Hornet’ So Let’s Look At Every Car That Ever Had That Name. There Are More Than You Think.

In this morning’s Dump you may have noted that Dodge seems to be planning to release a small crossover based on the Alfa Romeo Tonale that they’re going to call the Hornet. This got me thinking about the name: Hornet is a fantastic one for a car, and it’s certainly been used before, but I want to know just how many cars were called Hornet. Well, I dug around to find out, which means in a matter of moments, you’ll know, too. There are more Hornets out there than you’d think!

Let’s do this in chronological order, why not, from oldest to un-oldest. Ready for a swarm of Hornets? 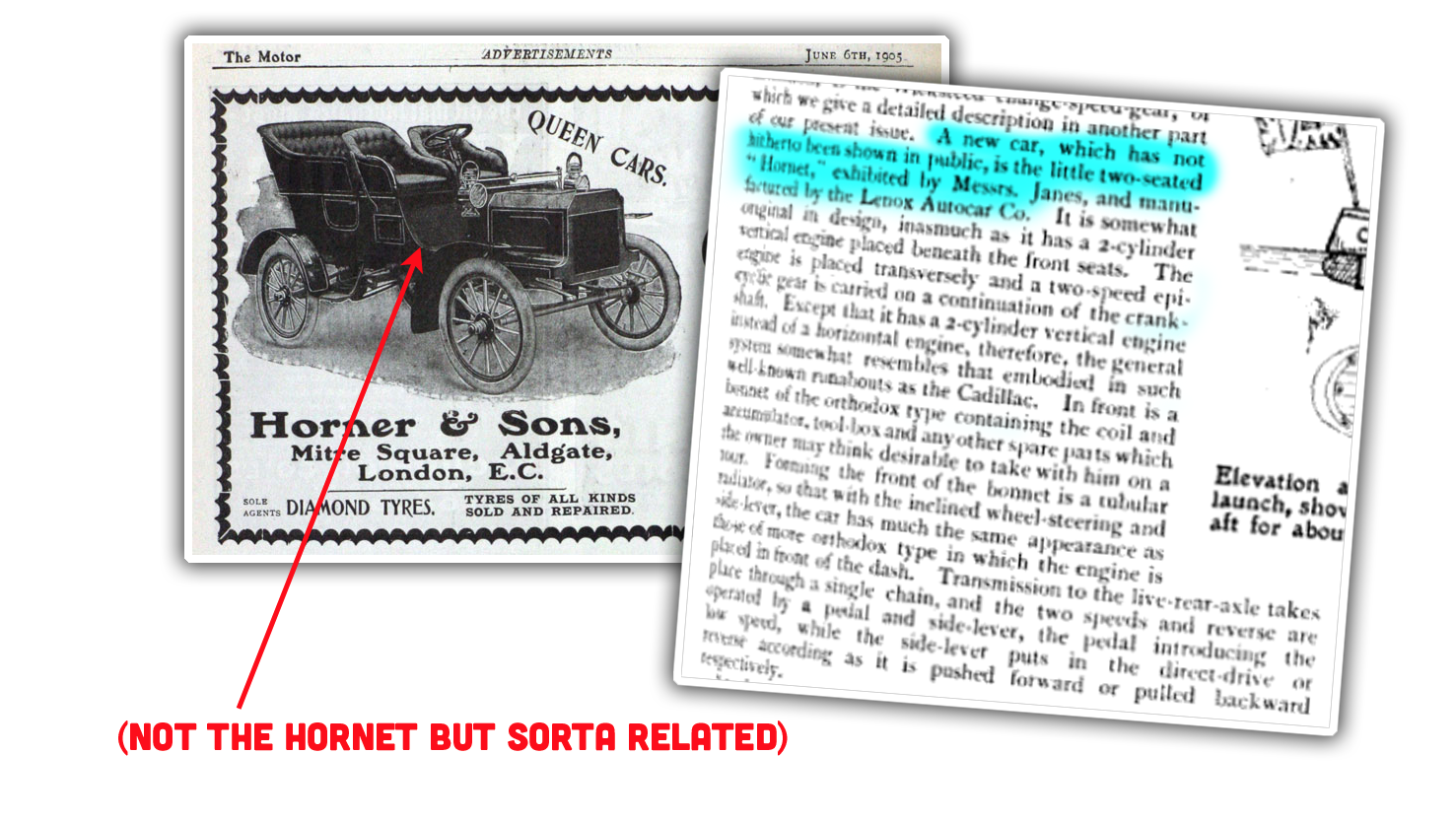 The first car to have the good sense to be called Hornet happened way back in 1905. I haven’t been able to find an actual picture of this car, but it sounds wonderfully strange: transverse, vertically-set inline-twin located, somehow, under the seats.

That car up there was sold by the same Horner & Sons firm that sold the Hornet, but is actually a Queen. It’s the closest image to this Hornet I could find.

My copy of the New Illustrated Encylopedia of Automobiles also states that the engine was a “massive” 3078cc unit making 24 horsepower, and an even more massive 6158cc four-cylinder was available, making a weirdly precise 48.6 hp. For 1905, these were extremely impressive numbers!

The Encylopedia also notes that “coyly, the company advertised these as “9hp” and “18hp.” Is this the first case of a carmaker sandbagging the actual power of their engines? Maybe! 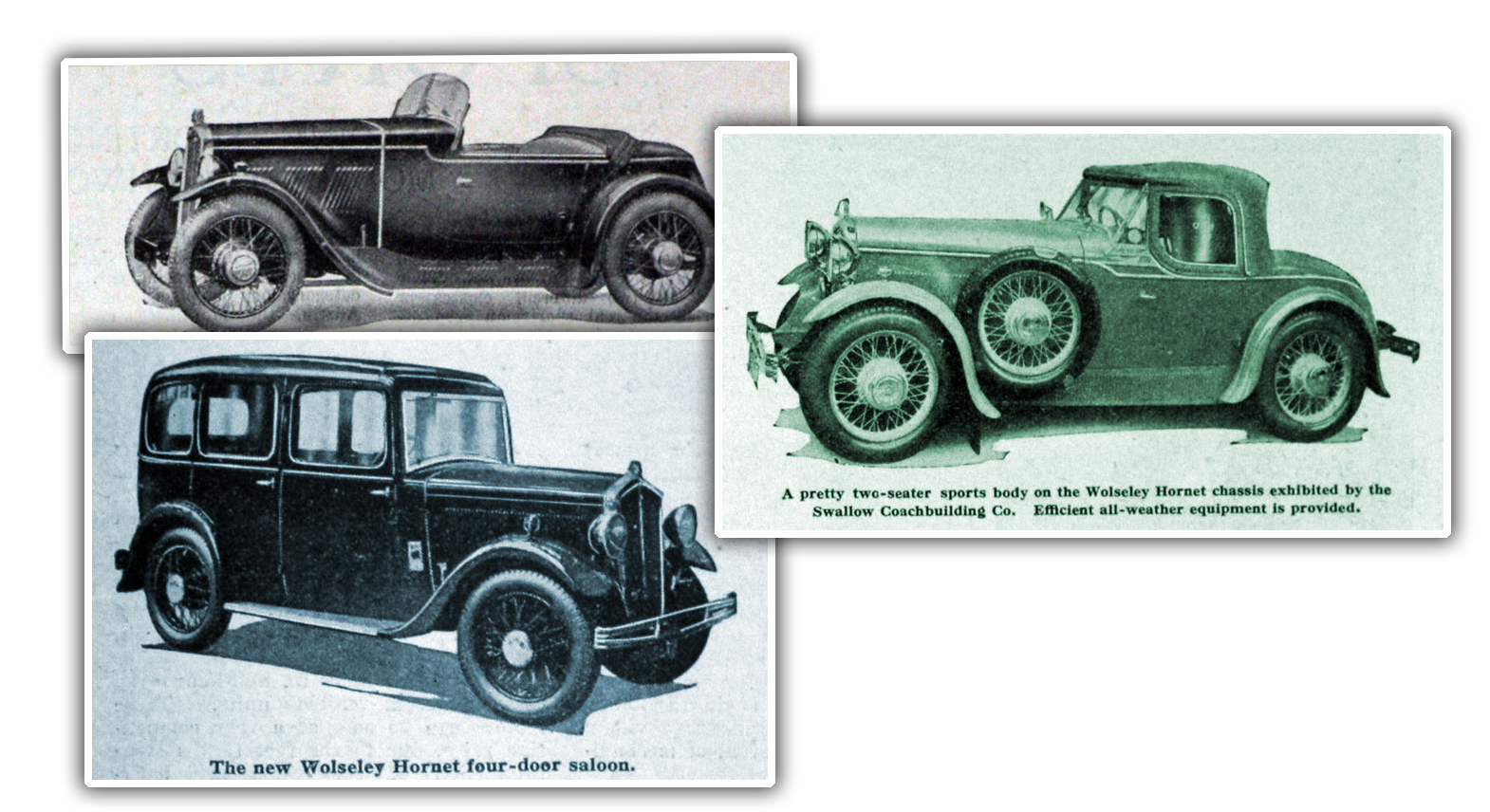 British carmaker Wolseley, known for its famous illuminated radiator badge, had a Hornet from 1930 to 1936. It came in a variety of body styles, including four-door sedans, coupés, and roadsters, and coachbuilders could even buy the bare chassis, ready to have any kind of body plopped on.

These first Wolseley Hornets (foreshadow!) had charmingly tiny 1.3-liter six cylinder engines (those pistons must have been the size of thimbles) and, interestingly, four-speed gearboxes. These were really appealing little cars. 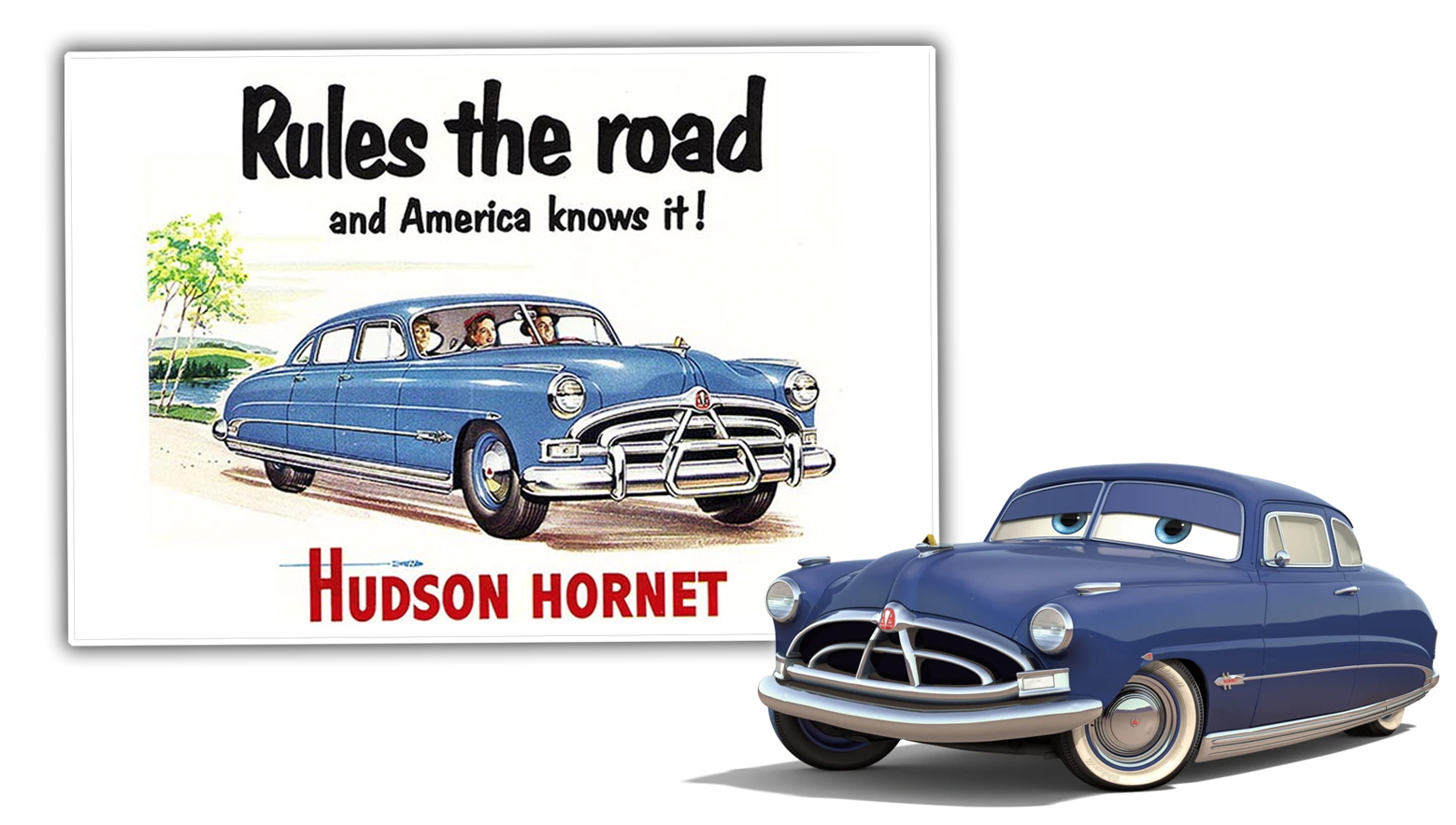 Arguably the most famous of the Hornets, partially because this Hornet got a starring role in a Pixar movie, the Hudson Hornet is sometimes thought of as a sort of proto-muscle car because at the time of its introduction, it offered the largest straight-six engine you could get (5 liters!) and an optional (later standard) “Twin H-Power” dual-carb intake manifold that pushed output to 170 hp.

Hornets did incredibly well in stock car racing, partially because of their power, and partially because their “step down” chassis design (where floor pans dropped between frame rails, instead of riding on top) gave them a lower center of gravity, and, as a result, better handling.

They didn’t really sell all that well at the time, despite their racing successes, but are coveted by collectors today.

This use of the Hornet name marks the start of a lineage that goes from Hudson-Nash to AMC to Chrysler to Stellantis today. 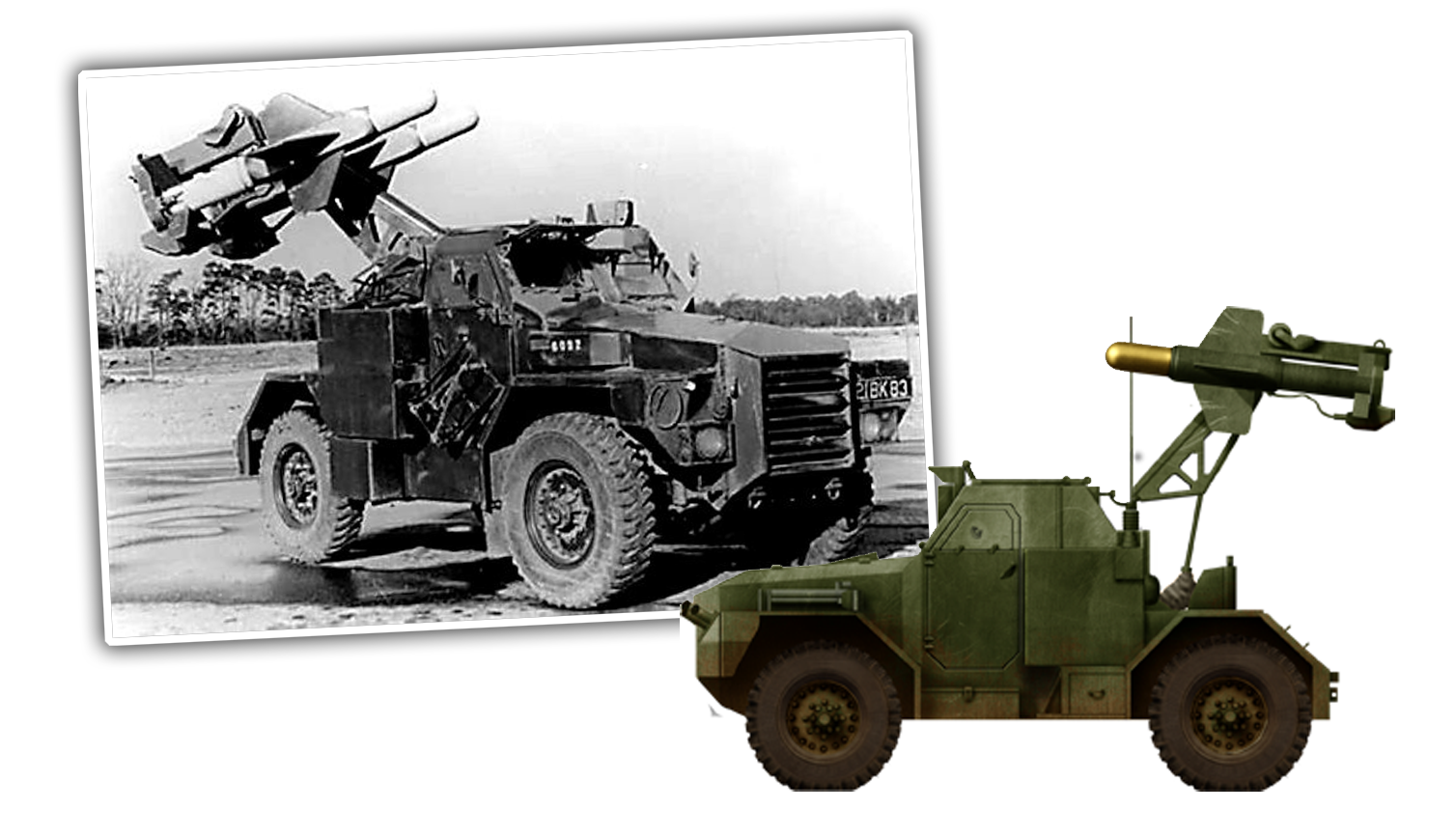 This Hornet had a genuine sting, in the form of a missile launcher that could launch a pair of missiles at any enemy tank that was unfortunate enough to cross this little brute. Derived from the Humber Pig armored truck, the Hornet used wire-guided Malkara missiles, and these were pioneers of anti-tank weapon systems.

Wire-guided missiles like the Malkara are kind of bonkers things: they were literally controlled by a joystick connected by a wire to the missile. In fact, the digital joystick got its start from these systems, and in the case of the Malkara missile (co-developed by Australia and Great Britian) the joystick’s “cable” was about 5,900 feet – that’s over a mile!

The Hornet used an inline-six engine making 120 hp and made by Rolls-Royce, of all companies. At over five tons and 120 horses, these things weren’t exactly quick, but, then again, neither were tanks.

Most importantly, these were a lot cheaper to build than tanks, so consider one for your next budget-conscious war effort. 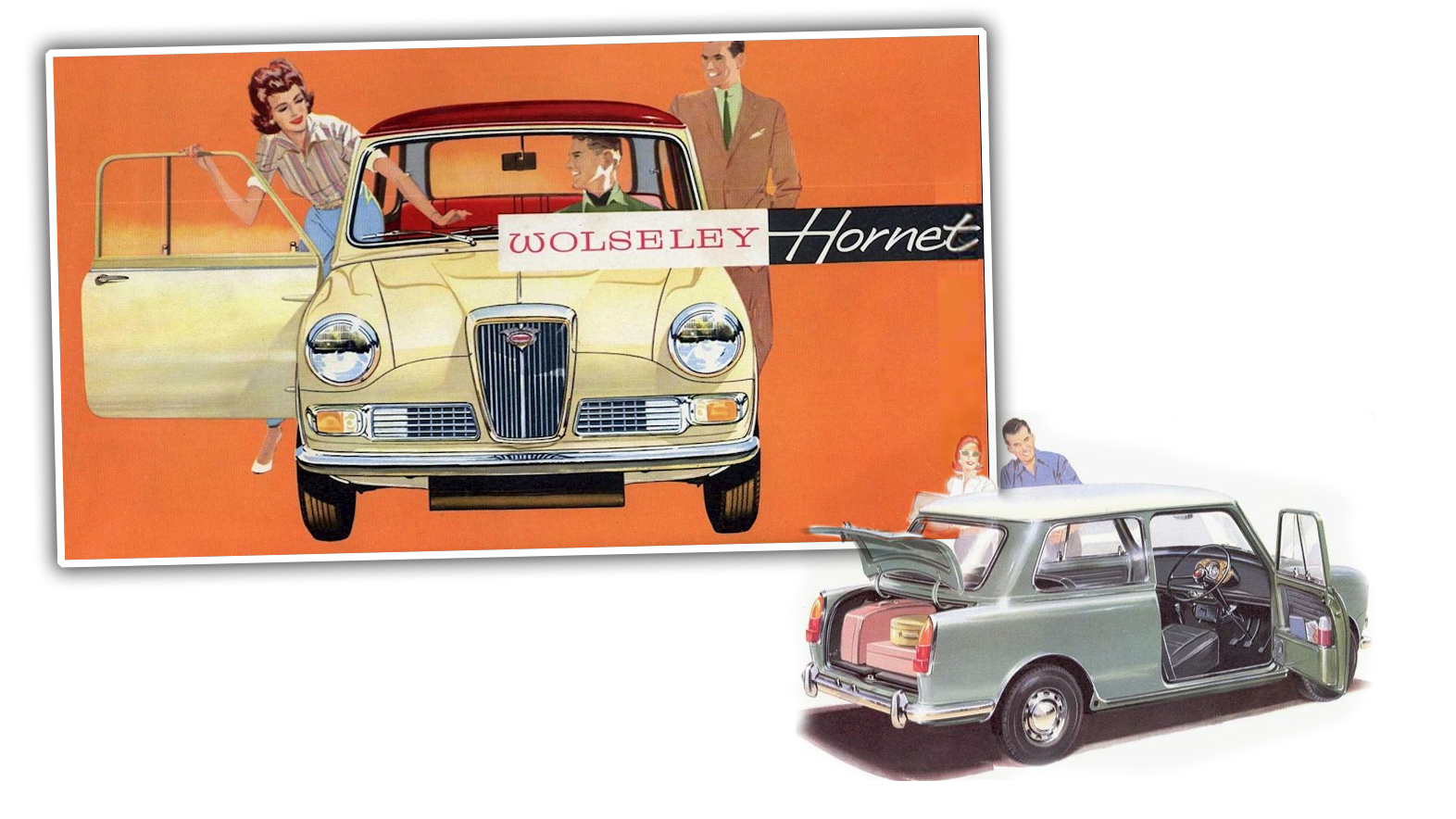 Look! Another Wolseley Hornet! This one was a modified version of the BMC Mini, but had a little trunk grafted onto its ass, and got a substantial nose job with Wolseley’s traditional upright grille stuck on in place of the usual horizontal Mini grille. Mechanically, they were essentially the same as the Mini, though sometimes they got refinements a bit earlier, like concealed door hinges or more powerful brakes.

The Hornet, along with the nearly-identical Riley Elf, was sold as a more luxurious version of the Mini, and was a bit more practical thanks to increased luggage capacity. In the sense that they were tiny luxury cars, they sort of predicted the Aston Martin Cygnet, kinda.

One very odd limited-run Wolseley Hornet variant was a series of 57 specially-built convertibles made for a Heinz Soup contest. Yes, soup. In the UK Heinz is known for beans and soup as much as they’re known for ketchup here. Fascinating world we live in, right? 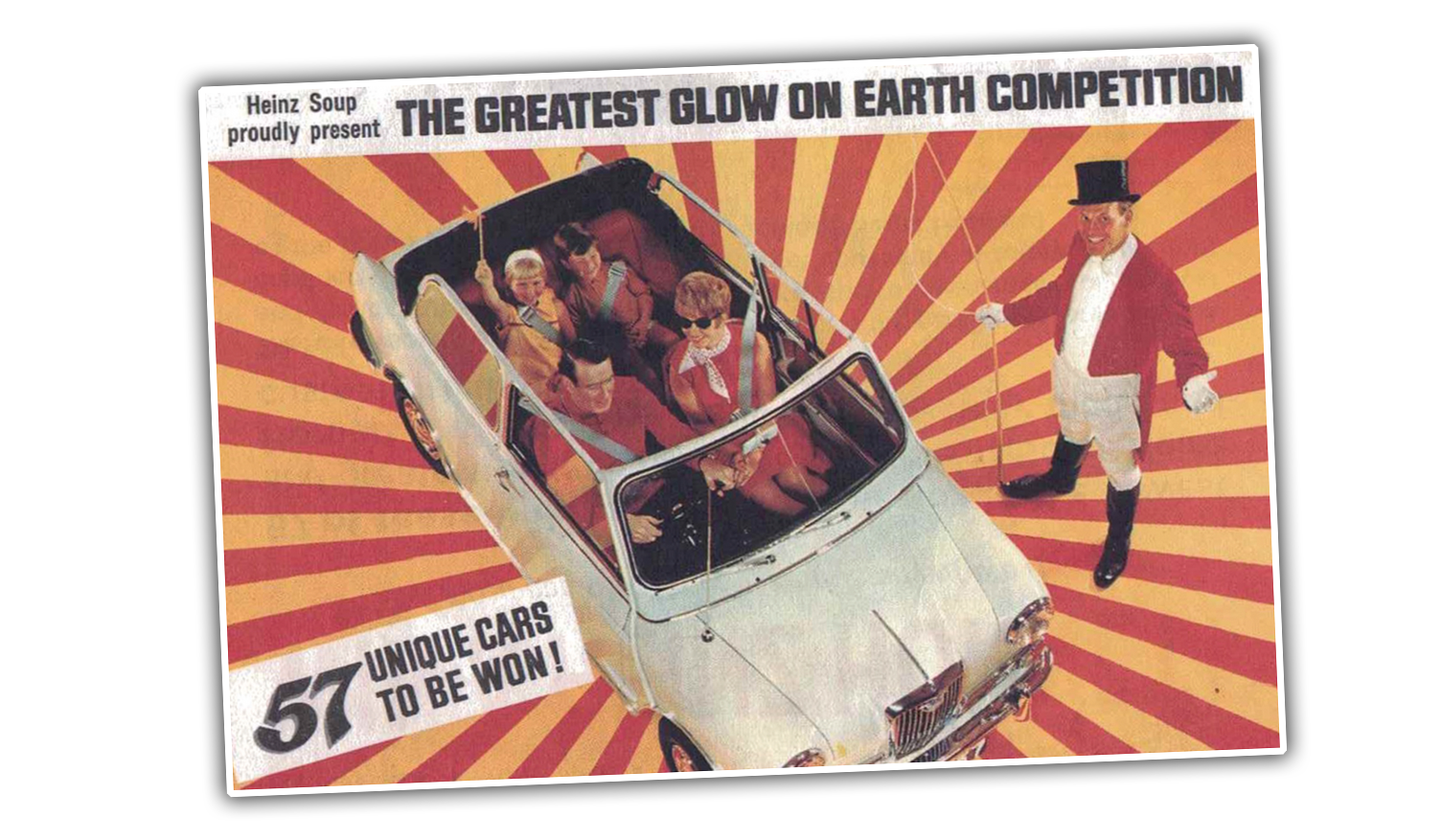 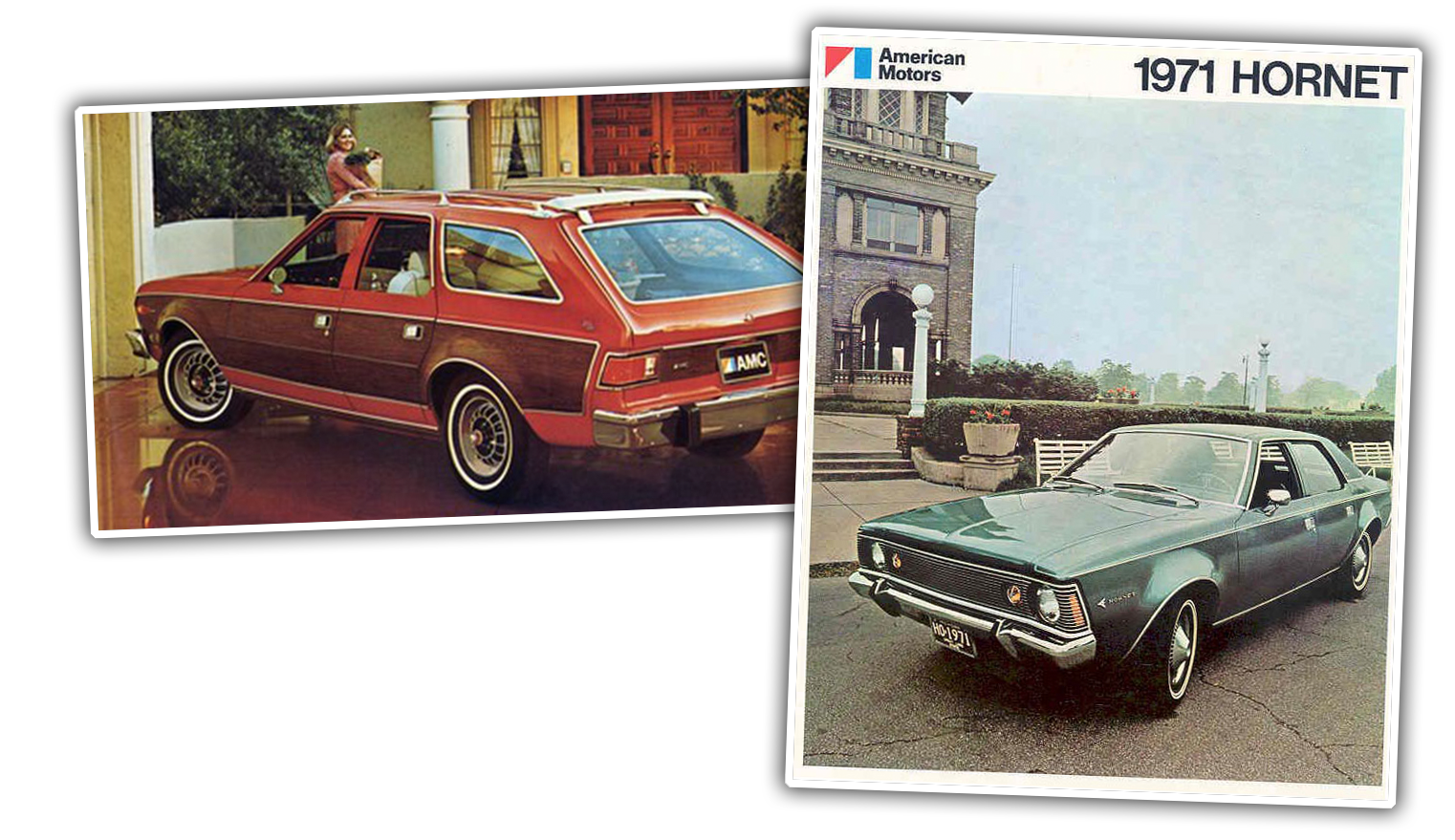 One of the better-known Hornets is a direct descendent of the Hudson Hornet, as Hudson was absorbed by AMC, which then gained access to the Hornet name for its new compact, mass-market car.

The Hornet was born from AMC designer Dick Teague’s Cavalier concept car, a car that maximized cheapness by re-using fender and bumper stampings. While the production Hornet didn’t go that far in cost-cutting, it did retain the clean, crisp look of the concept, and was an appealing, straightforward car.

It used AMC’s reliable inline-six powering the rear wheels, and came in sedan, coupé, and wagon (the Sportwagon!) variants. But what makes the Hornet really interesting is just how flexible it was, becoming AMC’s primary platform for years and years.

Lop off its butt, and the Hornet became the sub-compact Gremlin. Give it a fastback and a rear hatch, and it became the Spirit. Make a more luxurious version and boom, there’s your Concorde. Leverage AMC’s Jeep know-how to make a 4×4 version and now you have the AMC Eagle. What couldn’t the AMC Hornet do?

Other than completely save AMC, I mean. 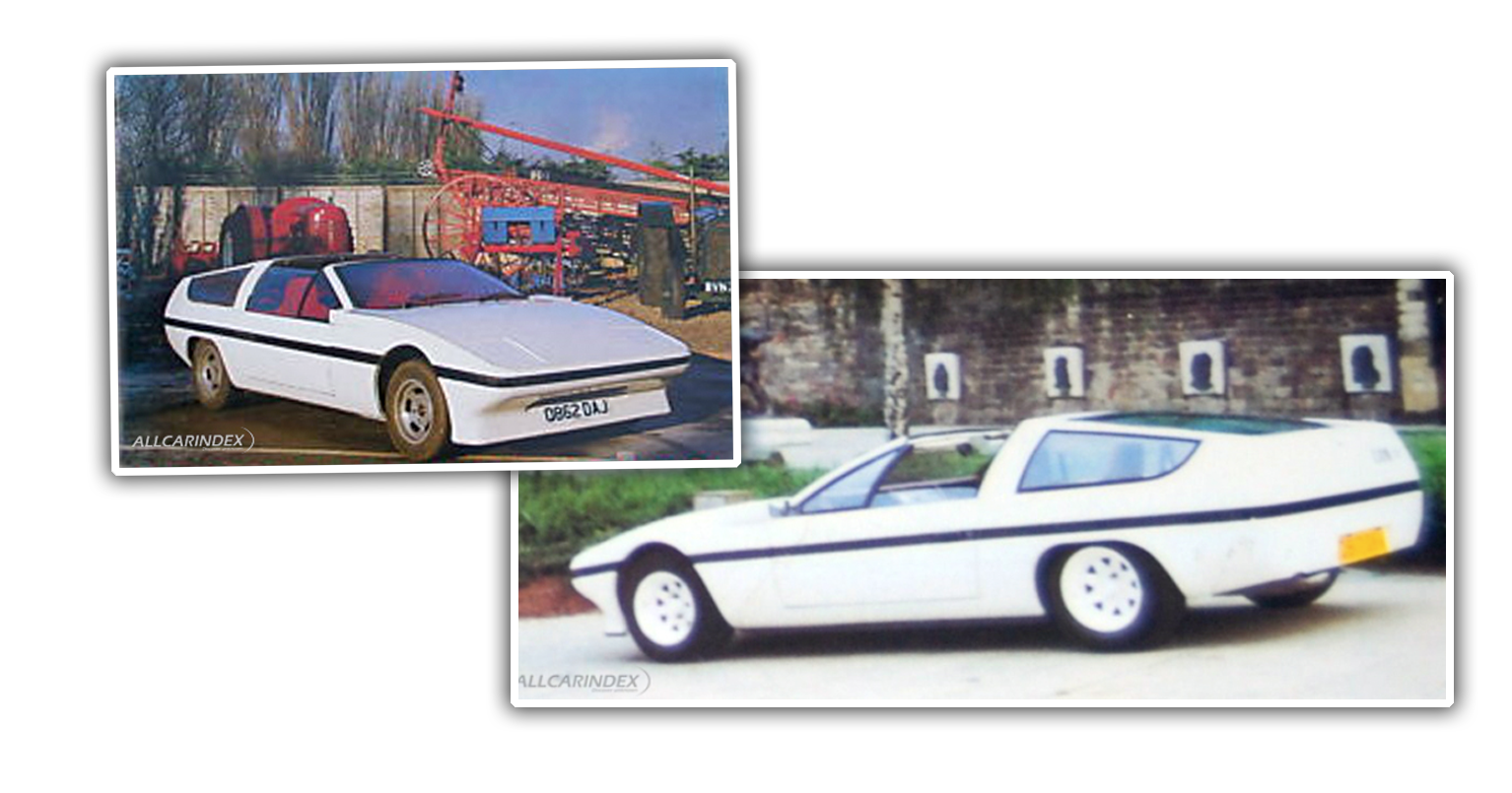 I’ll be honest: aside from an entry on AllCarIndex, I haven’t been able to find out much about this thing. There seems to be a German car dealership named De Novo, but I don’t think it’s related.

Based on the license plates, the De Novo DNK NCK-Hornet seems to be a UK car, and based on the proportions and stance, I’m wondering if perhaps this isn’t some kind of crazy re-body of a Jaguar E-Type?

I’m pretty sure there was only one of this Hornet. 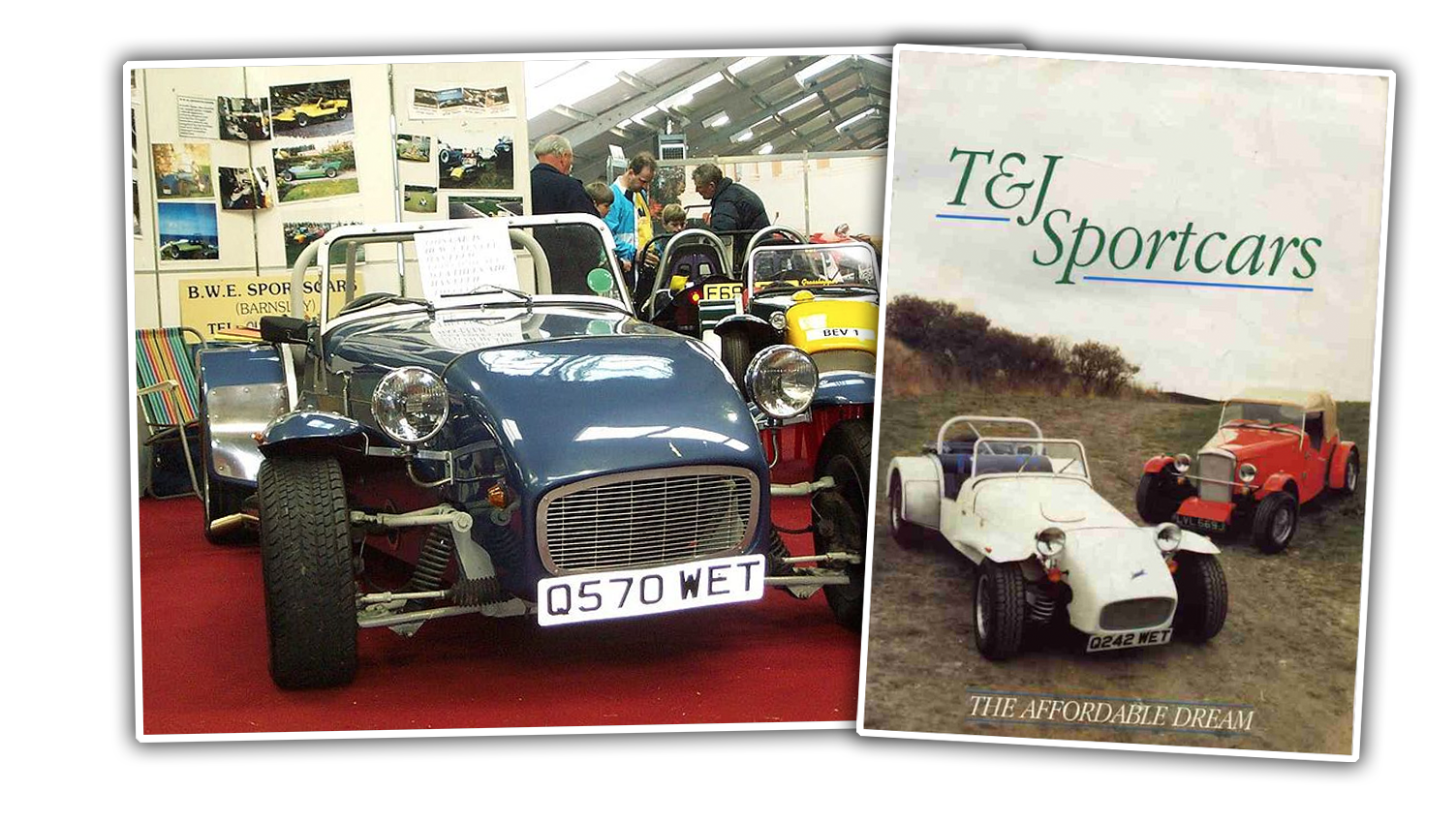 These Hornets are kit cars meant to look and drive like the legendary Lotus 7. Sold under both the T&J and BWE names these kits used a little European Ford Cortina sedan as the donor chassis and could use the Ford Kent Engine or the engine from the Ford Pinto.

The body tub is plywood with metal skin, and can use Ford Sierra parts (not Lotus 7 parts, even if it looks like a 7). 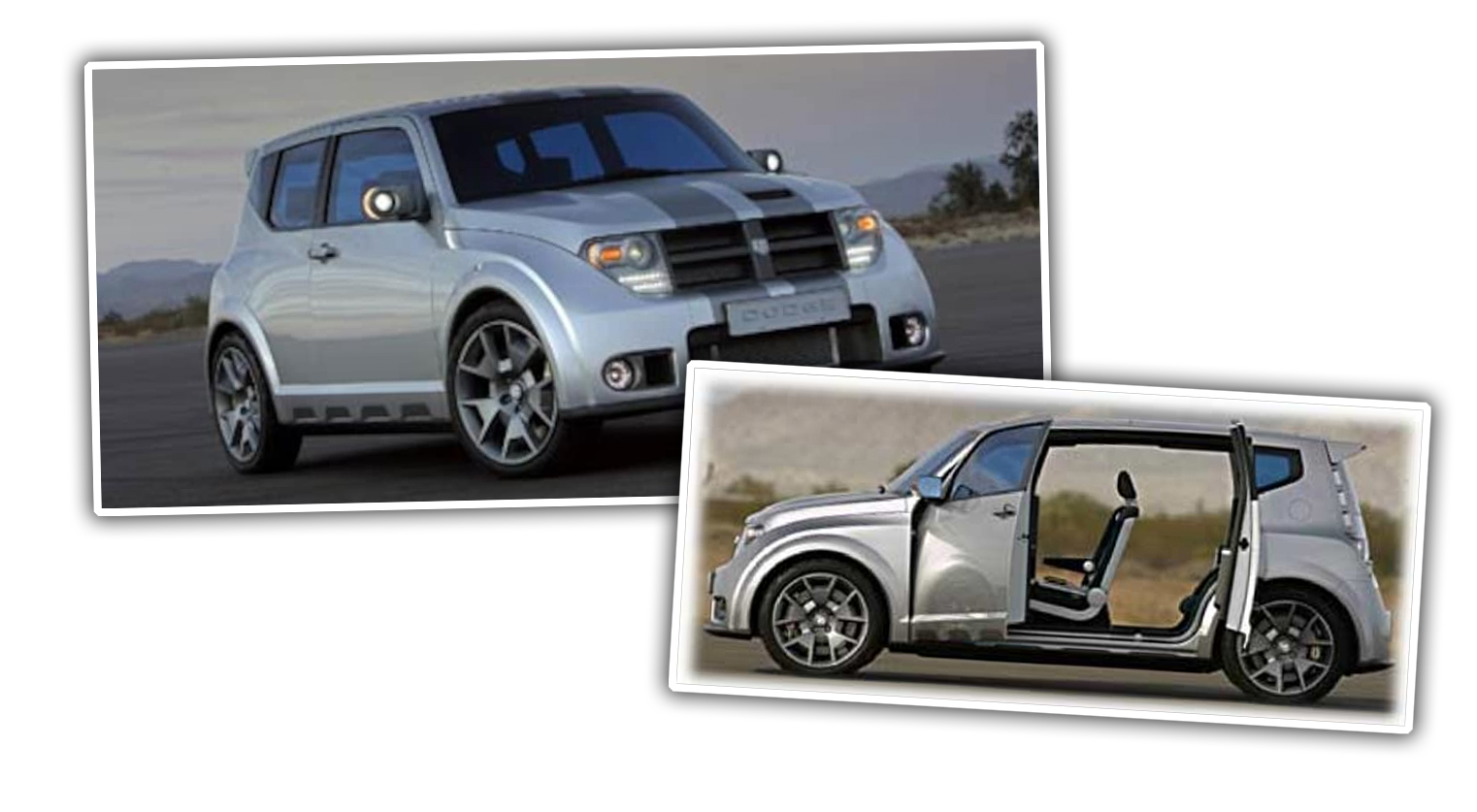 In 2006 Dodge was showing concept cars that had a certain kind of bulldog-aggressive look about them, including the Nitro (which went on to a production version) and the Hornet. The Hornet was kind of like a Scion xB that was tired of being bullied, and spent all summer brooding, working out, and listening to bad music.

The resulting car was sort of fun despite how obviously and desperately hard it was trying, and the rear suicide doors were certainly cool, especially with no B-pillar in the way.

It’s kind of a shame Dodge didn’t end up going with a little, boxy car like this, as I think those have a quirky charm and are surprisingly useful. The face can definitely be seen in the production Nitro, and proportionally I suppose the Fiat-based Jeep Renegade is a close modern Chrysler/Stellantis version of this thing.

That’s a lot of Hornets! I hope Dodge appreciates the significant legacy their new Hornet will have to carry on: stock car champs, plywood kit cars, AMC’s bread-and-butter, and soup-themed convertibles.

I'm a co-founder of the Autopian, the site you're on RIGHT NOW! I'm here to talk to you about taillights until you cry and beg me to stop, which I absolutely will not. Sorry. Hug? Also, David's friend.
Read All My Posts »
PrevPreviousRemember That Jeep Cherokee That Blew Up After I Sold It To A Nice Lady? I Sent Its Oil To A Lab For Testing And Now I’m Confused
NextWhy The ‘REST’ Button On German Cars’ Climate Control Panels Is A Wonderful Feature To HaveNext