Facebook-f Twitter Instagram Rss
Menu
Menu
Home » Remember That Jeep Cherokee That Blew Up After I Sold It To A Nice Lady? I Sent Its Oil To A Lab For Testing And Now I’m Confused

Remember That Jeep Cherokee That Blew Up After I Sold It To A Nice Lady? I Sent Its Oil To A Lab For Testing And Now I’m Confused

A few weeks ago, I sold my Jeep Cherokee XJ to a nice lady who had driven five hours from Chicago. Twenty minutes after driving my gorgeous 1991 five-speed XJ from my property for what I thought would be the final time, she called me. “The Jeep is overheating and won’t move.” I towed the Jeep back to my house and took an oil sample just before discovering that the water pump had failed and apparently blown the engine’s head gasket, that I was in for a hell of a wrenching job. I sent that sample to a used oil-analysis lab; here’s what it found.

I’ve written about Fort Wayne, Indiana-based Blackstone Labs quite a few times before, because it’s a service I use to make sure my engines are in top running order. On multiple occasions, the company’s findings have helped me diagnose intake manifold leaks (which manifest themselves in elevated silicon levels in the oil — dirt and dust are silicon-based) and head gasket failures/cracked heads (which manifest themselves in elevated sodium and potassium levels – these are common additives found in engine coolant). The $30 reports also help me understand if there’s too much fuel in my oil (indicating a leaky injector) and if the motor is wearing down too quickly for whatever reason. So naturally, I was curious to see what I’d find in an engine that had just “blown up.”

At least, that’s what I thought had happened; the loud “knocking” sound coming from the block seemed like a bad rod bearing, but as I later found after a bit of diagnosis at my house, the source of the noise was just a bad water pump. Unfortunately, that water pump had caused overheating, and as I found during my compression test, this had killed the compression in multiple cylinders.

So let’s have a look at the used oil analysis datasheet to get an indication of how badly the overheating and failed head gasket/head might have damaged this beautiful Jeep Cherokee XJ’s engine:

Okay! So the second column shows the elements, in parts per million, that Blackstone found in my oil, while the third column represents how much of each element Blackstone typically finds in a 4,000 mile oil sample. Keep in mind, the oil in my Jeep’s engine only had about 150 miles on it, so it should have much, much fewer wear particles (though additives should be similar).

Unfortunately, as you can see, aluminum, iron, lead, and silicon were at levels even higher than those Blackstone normally sees in 4,000 mile samples. The Jeep 4.0-liter, and pretty much all gas engines, has aluminum pistons, though the rest of the engine is made of iron — except for the bearings, which are composed of lead, tin, copper, and other materials.

So the 14 ppm of aluminum versus the four normally seen in a 4.0-liter engine with 4,000 miles on it is a bit concerning. Hopefully my piston skirts are still intact! The 64 ppm of iron — over 2.5 times as high as what’s seen in a 4,000 mile sample of oil — ain’t great, either, so I’m hoping my camshaft lobes and piston rings are okay.

The lead, copper, and tin aren’t great, either. Lead is twice what Blackstone normally finds in a 4,000 mile sample, copper is just below typical for 4,000 miles (but again, my engine has 150 miles on it), and tin is showing a reading when it normally doesn’t. So there’s definitely some bottom-end bearing wear that resulted from this short 20-minute trot.

As far as oil contamination, part of the wear is possibly a product of dirt getting in somehow, and some might be a result of low viscosity (8.48 cSt at 100C is more like a 20-weight oil than the 30-weight oil recommended for this engine) resulting from some fuel dilution (I have no clue how fuel got into that oil), but what’s weird about this sample is that there’s something missing.

Where the hell is the sodium and potassium? 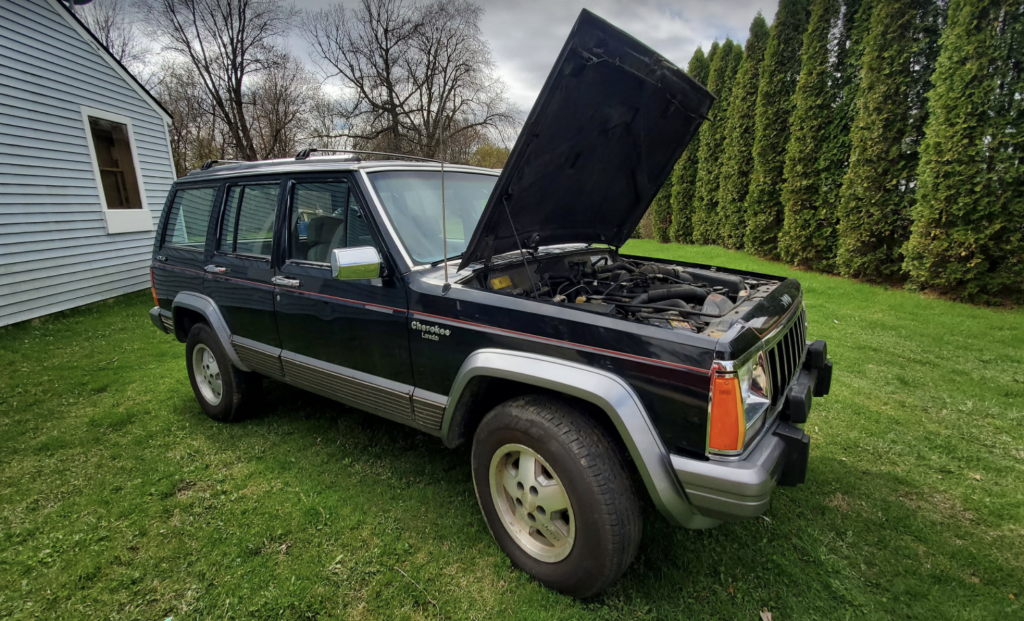 If this Jeep blew a head gasket — which my ccompression testing suggests was the case (I certainly didn’t blow holes into three pistons) — then how did no coolant get into that crankcase? I could see how dirt might have gotten in, since the pistons are now sucking air in through the block/head interface instead of through the intake manifold, and I could see how that plus too-hot oil could have caused elevated wear of rings, bearings, and pistons (heat was obviously the overwhelming contributor to wear). But how was coolant contamination not a factor, here?

I’ve had head gasket failures without obvious oil contamination (the oil still looked good (i.e. not milky), and would only slowly creep up the dipstick), but every time there was any coolant loss in one of my vehicles, Blackstone detected at least a trace of the stuff in the oil. So I called the company to talk me through this.

“I would be surprised if [a head gasket failure] was the problem based on potassium and sodium,” the representative told me initially, looking at my XJ’s report. “There probably is a problem in the cylinder area…The levels of aluminum and iron suggest quite a bit of cylinder and piston wear.”

The rep then asked me what made me think there was a head gasket leak. I told her that an overheating incident followed by loss of compression in multiple adjacent cylinders is pretty much a dead-ringer for a bad head gasket.

The rep explained that, generally, anything over 20 ppm of either sodium or potassium is a red flag for a coolant leak, and though the analysis didn’t detect any coolant, that doesn’t necessarily mean the head gasket didn’t fail. The added wear, she said confidently, is not from coolant in oil, though; it’s from elevated engine temperatures causing more friction in metal-to-metal interfaces. 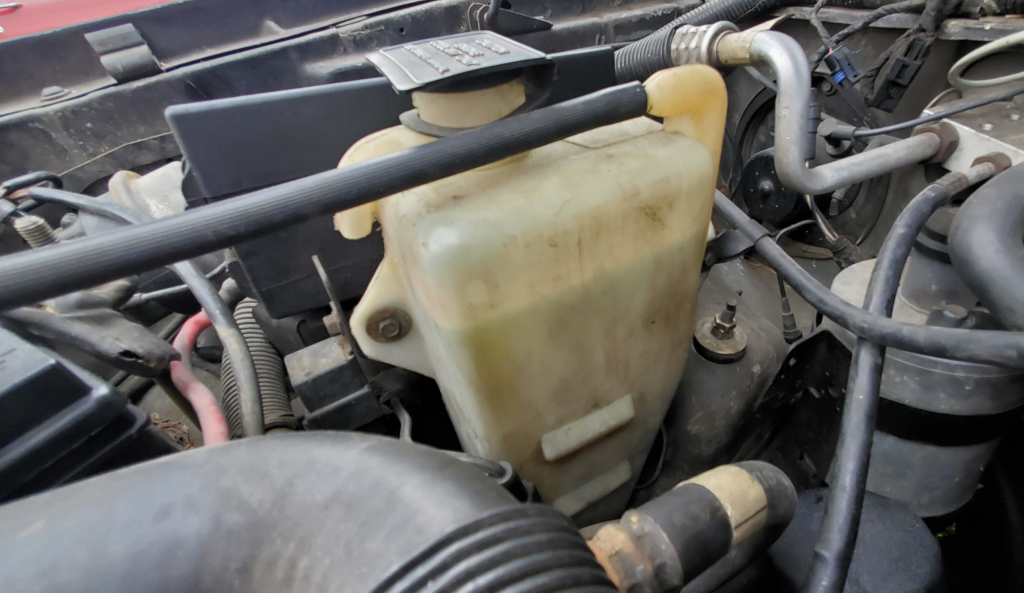 What might have happened, the rep and I agreed, is that the Jeep just spewed all of its coolant out of the water pump (I tried filling the cooling system after the incident, and it all poured out of the failed pump, directly onto the ground). The strange thing is: If there was no coolant in the cooling system at the time of the overheating incident, then why is my overflow bottle filled up so high?

I’m going to guess the engine ran low in coolant due to the bad water pump, started overheating, blew all of its remaining coolant into the overflow bottle and onto the ground, and then the head gasket failed, possibly after the buyer parked the Jeep. So there was just no coolant to get into the cylinders/crankcase, plus there wasn’t a lot of time that the engine was running after the gasket failed.

We’ll find out when I tear into the motor. I’m hopeful that a new gasket/possibly a new head will get this vehicle back onto the road. I’m not too concerned about the elevated wear metals, since they’re roughly in line with what one would see out of three consecutive 4,000-mile oil changes. Not great, but not horrible. At least, that’s what I’ll tell myself so I can sleep the next few nights before I tear into that motor.

Rust-loving Jeep man, cofounder and EIC of The Autopian, Jason's friend. Email: david@autopian.com
Read All My Posts »
PrevPreviousA Deep-Dive Into The First-Generation Of Chinese Sports Cars. Which Came Out In The 2000s. And Which You’ve Never Heard Of.
NextDodge Is Bringing Back The ‘Hornet’ So Let’s Look At Every Car That Ever Had That Name. There Are More Than You Think.Next