“Hey, the Jeep is overheating and there’s black smoke coming from the exhaust,” the nice lady who had just bought my Jeep 20 minutes prior told me over the phone. A few moments later: “Now the Jeep won’t start anymore.” I grabbed my keys and drove 30 minutes southwest to Northville, Michigan to assess the damage to a Jeep that I had been so damn close to finally being rid of. I had nearly taken a step in culling my herd of vehicles, but the Jeep gods struck me down with a mighty blow. Let’s see how hard that blow was by assessing the damage.

Last Tuesday was a nightmare, as you read in Jason Torchinsky’s live blog. It was supposed to be a glorious, rare day in which I actually reduced my vehicle fleet in what has to be the most painfully glacial move towards any goal ever — the goal being me having some semblance of a social life. Look at how happy the buyer, Tracy (whose dad is the Jeep’s original owner) is: 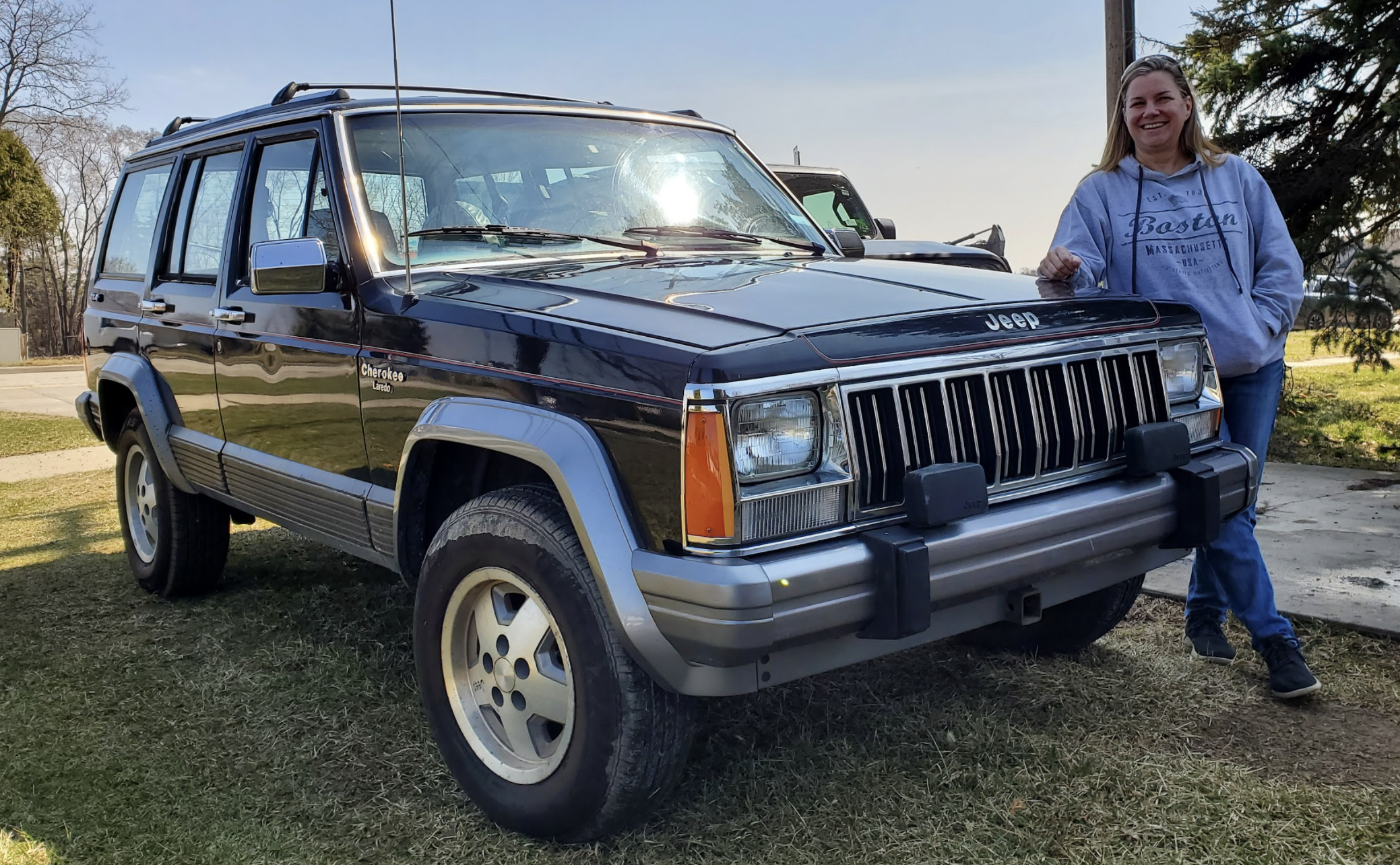 And look at how happy I am for finally being rid of this Jeep. I’d bought the Jeep in 2018, but soon thereafter knew I had to part ways with it. I realized that I’d get less money for it if it remained broken, so I replaced the dented fender, fender flare, and front and rear bumpers — all of which required paint from my local auto body shop. I also replaced the front axle, steering box, steering intermediate shaft, engine computer, driver’s seat, floor mats, leaf springs, radio, and so much more. In the fall, I finally had the Jeep in a sellable condition — one that would bring me more than just a pittance in profit, and one that would ensure that the Jeep lives on for years to come. Selling the Jeep back to the original buyer’s daughter was a great moment:

Sadly, the moment didn’t last; instead of parting ways with the machine, I experienced a seller’s worst nightmare: Immediate vehicle failure only moments after sale. 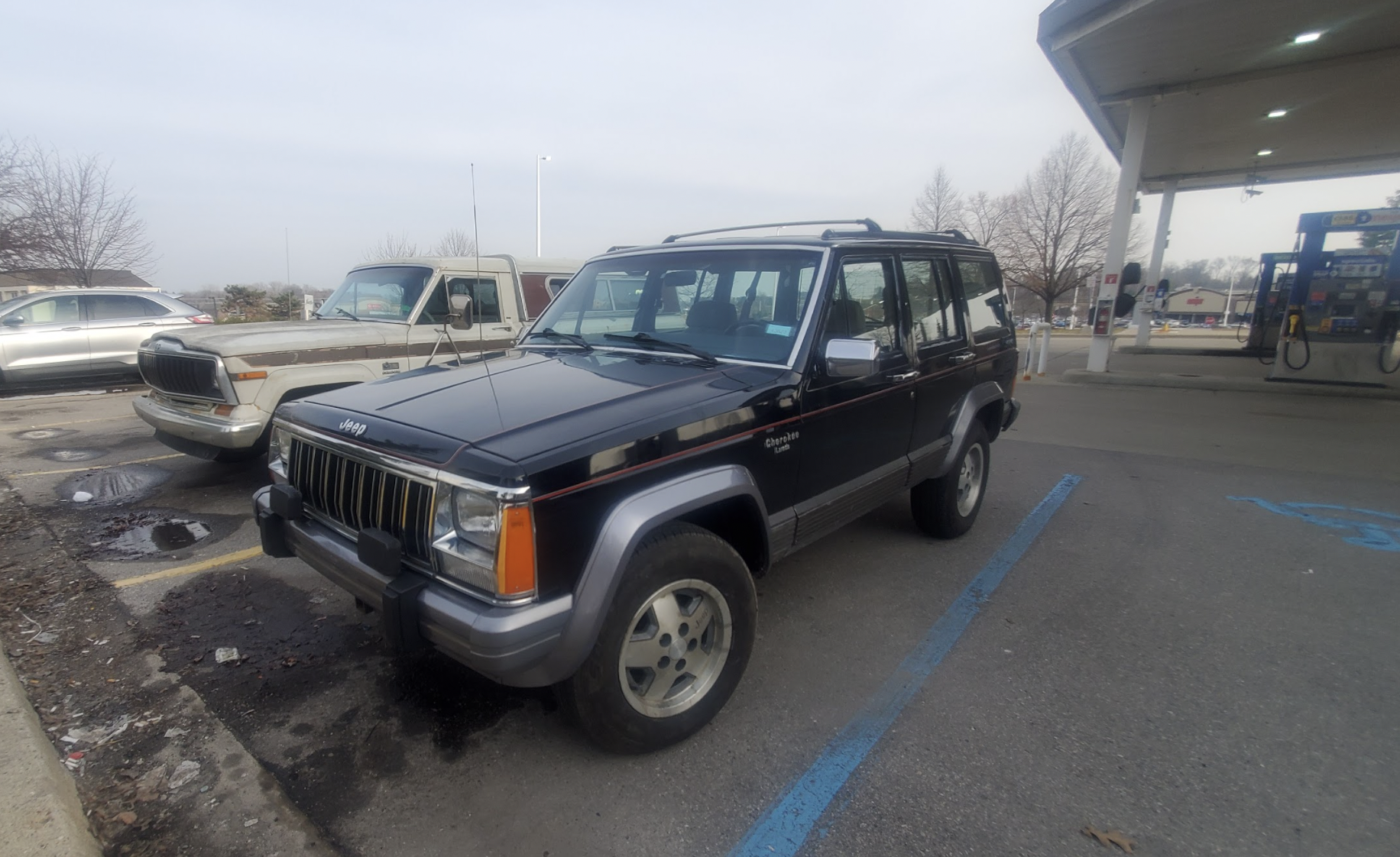 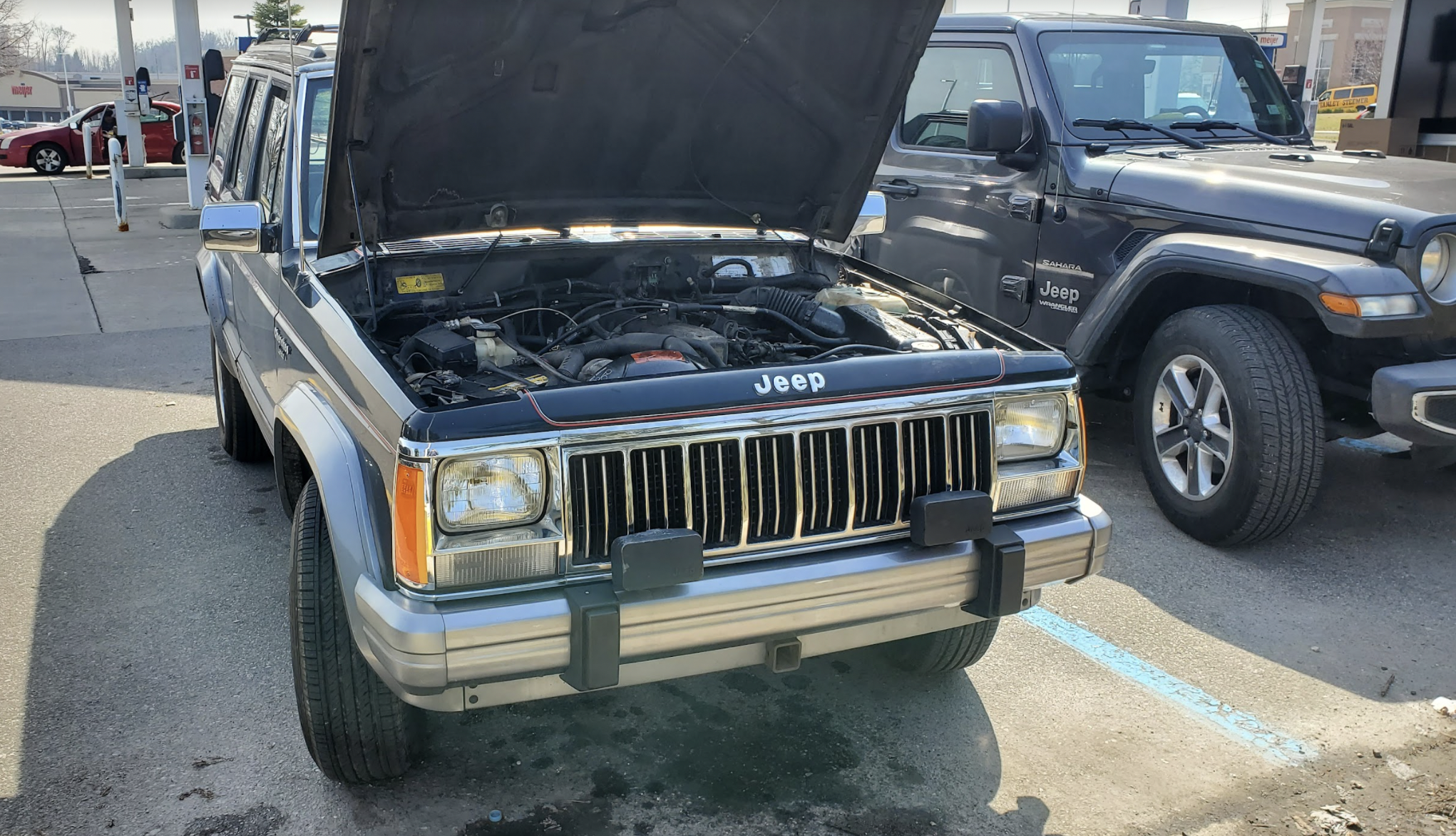 I arrived on the scene half an hour after Tracy’s call. Her husband had limped the Jeep into a gas station parking lot, and now it was time for me to see what was up. The first thing that became obvious when I popped the hood: There was coolant all over the engine bay. The motor was bone dry on the inside, but dripping wet at the front: 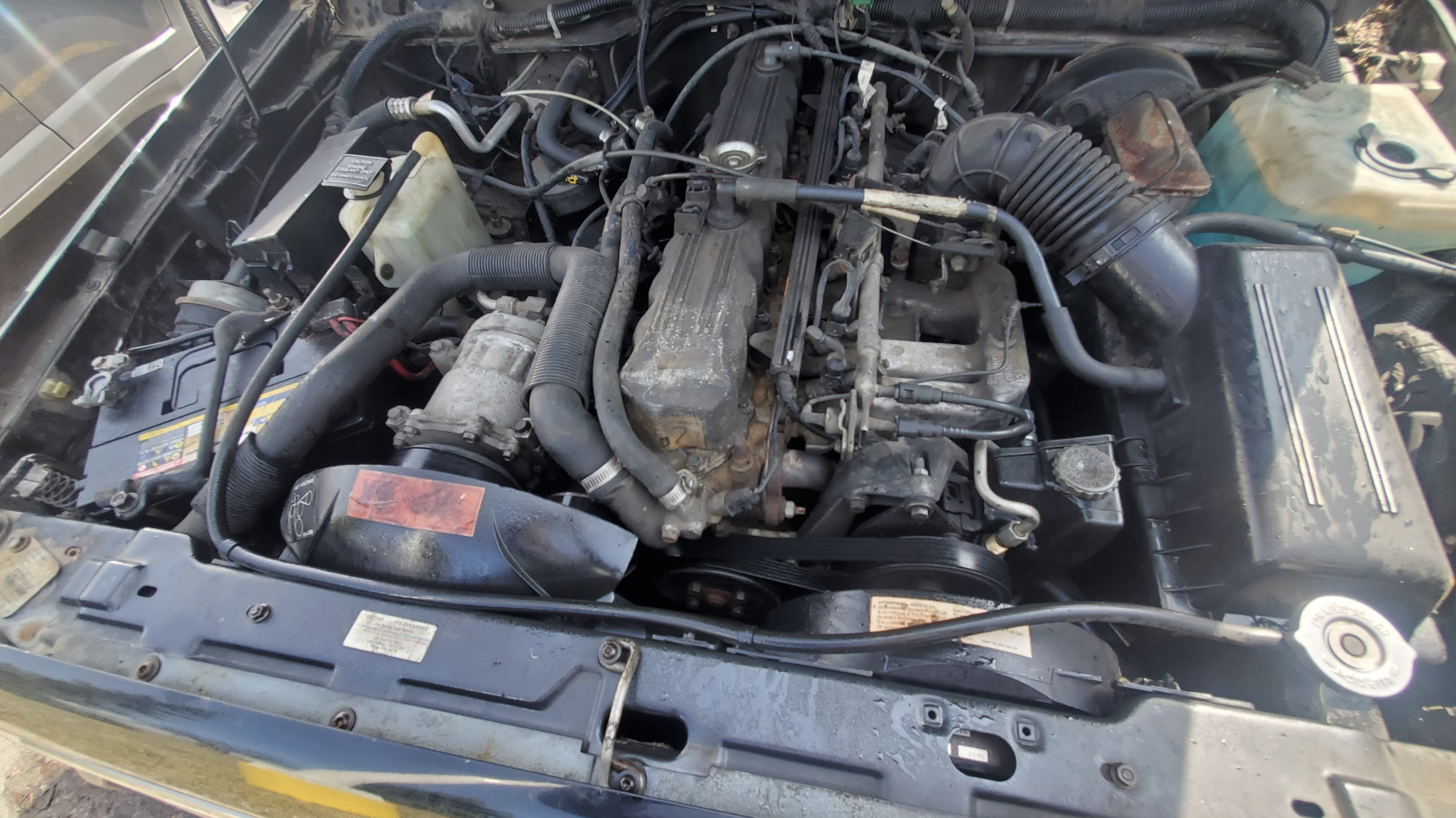 Tracy had told me the motor had been struggling to fire up; this concerned me. After checking the oil (it looked clean), I cranked the key over to see what was wrong. What I heard nearly made me weep; the AMC inline-six engine was crying in pain:

How had this happened? How had this motor developed a severe knock? I had changed the oil a few years prior, but I hadn’t driven the Jeep. Had moisture gotten into the crankcase in the interim? Surely not that much moisture would get in from sitting, right? Had I accidentally left automatic transmission fluid (which I use to protect cylinder walls against rust) in the cylinders when I threaded in the spark plugs? And did this cause me to hydraulic the motor and bend a rod? I racked my brain for days as I tried to get AAA to tow the Jeep, only to be turned down because the company couldn’t find anyone to yank the Jeep a measly 29 miles. These are weird times we’re living in. 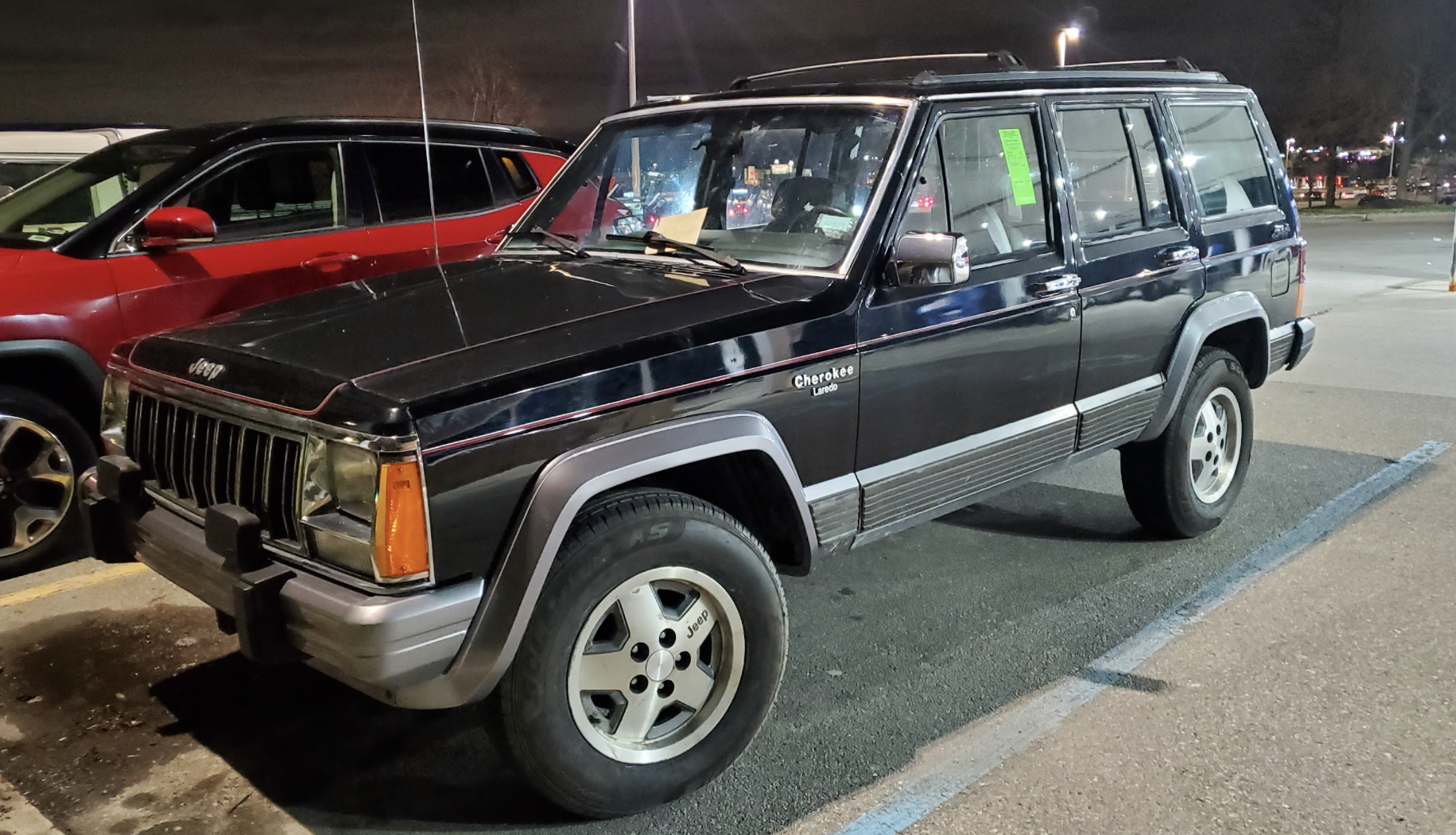 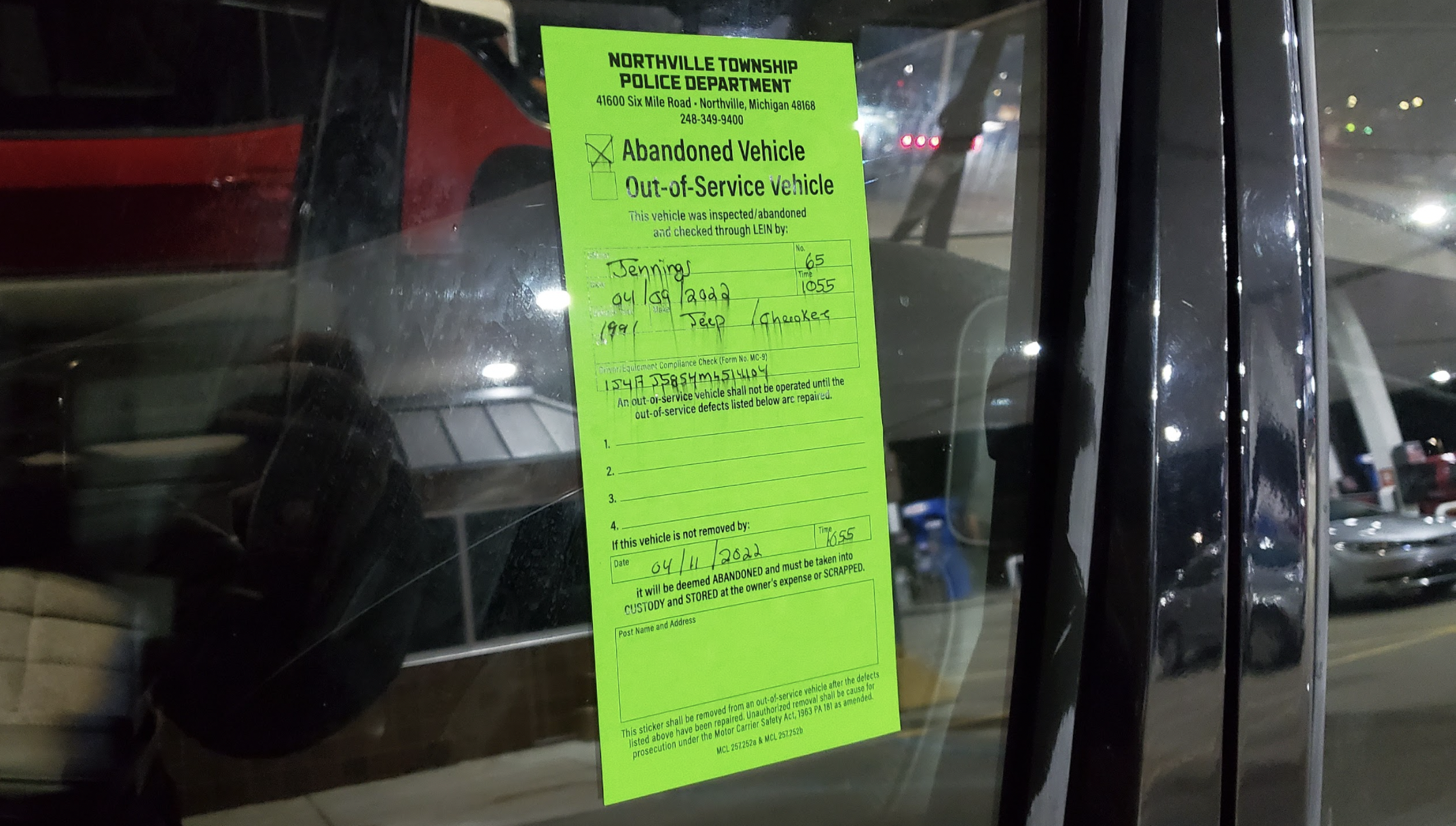 When the local police department called to notify me that it was placing a 48-hour notice on the Jeep and that if I was unable to remove it it’d be impounded, I made removing the vehicle (about which I had notified the gas station owner, for the record) my top priority. 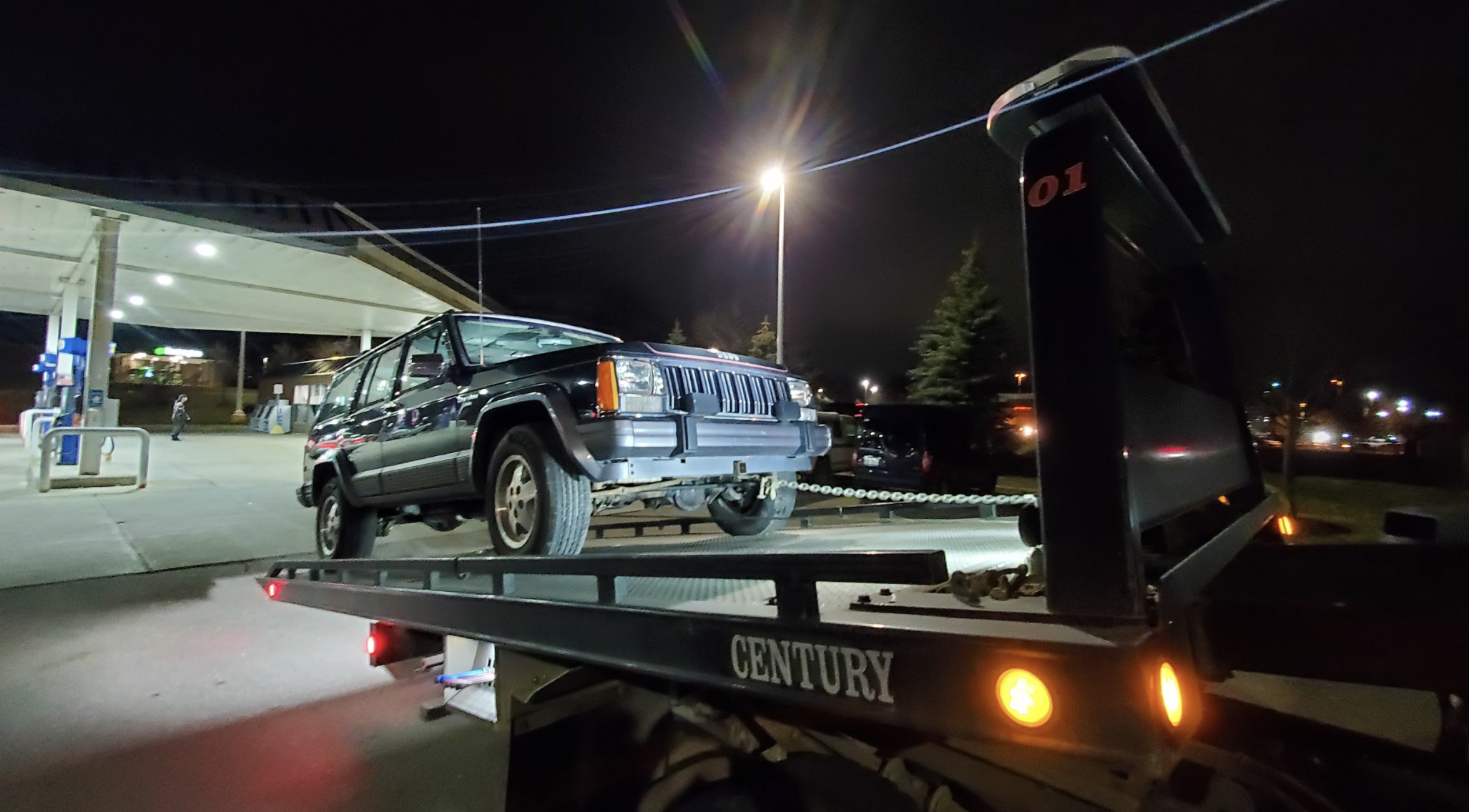 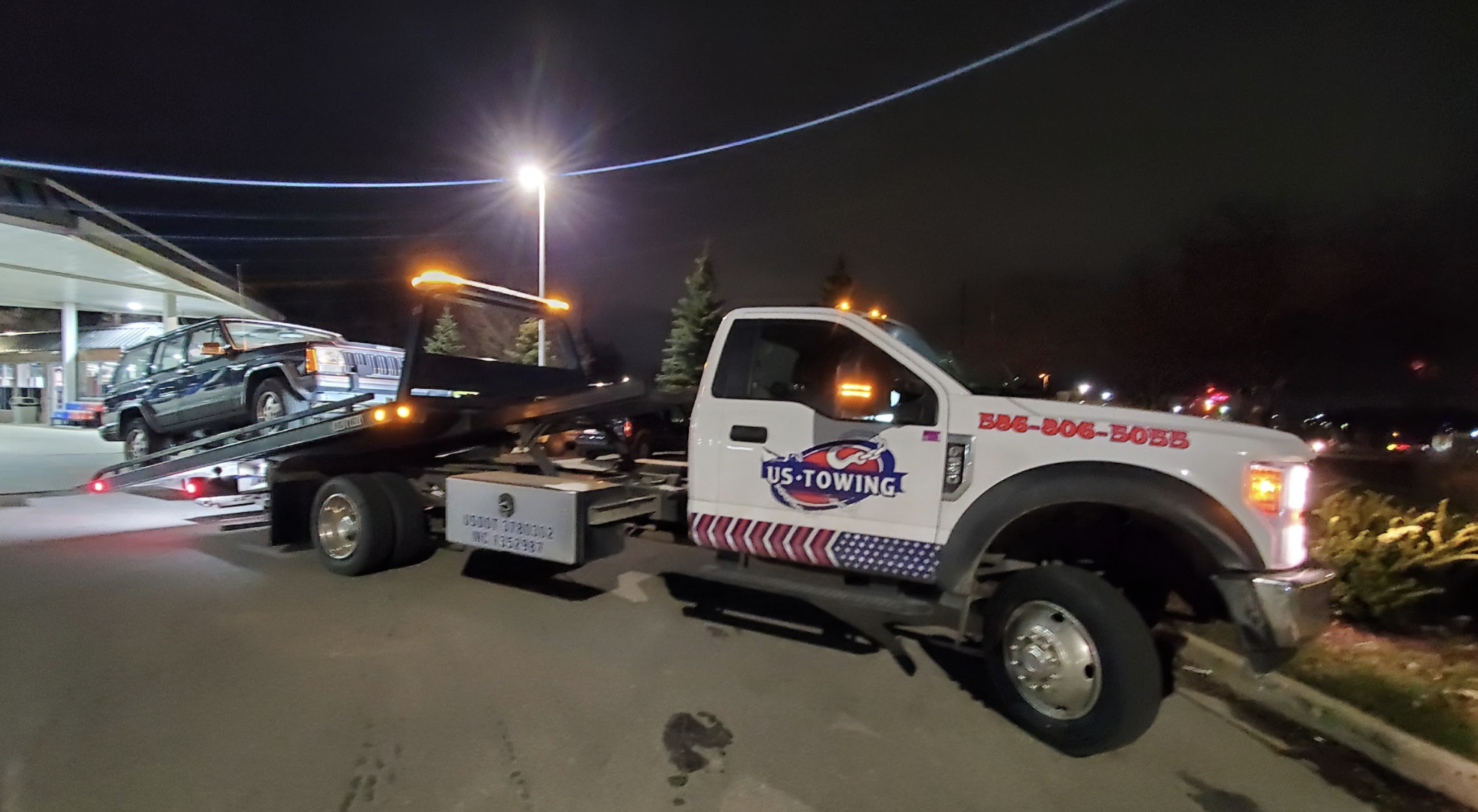 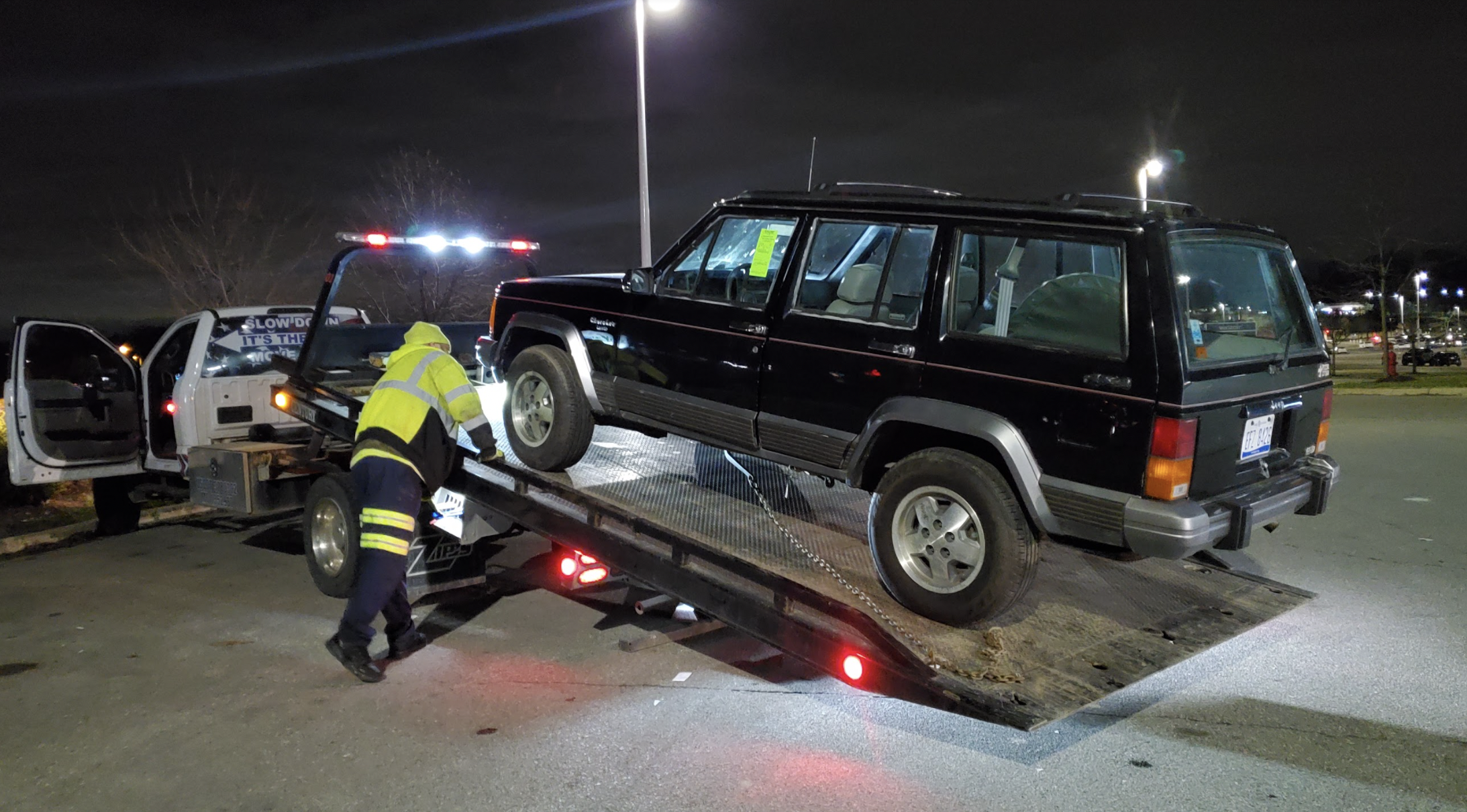 I bugged AAA, and eventually gave up when the company told me it just couldn’t find a way to tow my XJ back to my place. I reserved a U-Haul trailer, and planned to yank the vehicle back to my place on my own. But then a tow truck driver called me unexpectedly, I convinced him to wait 30 minutes for me to arrive, and finally the Jeep was on its way back to my place.

Getting the motor started after the tow truck driver dumped the Jeep in the street in front of my house was difficult, but after the driver hopped in and cranked the key with the gas pedal down, the depressed iron lump sputtered to life and slowly powered the off-roader into my driveway.

Yesterday, after nearly a week agonizing over it, I set about determining what the heck had happened. I was baffled because the AMC inline-six engine in this XJ is supposed to be unkillable. In fact, its durability is a major tenet of my religious views, and just on my philosophies in life. How this motor just failed like that for apparently no reason? Would I need to seek salvation elsewhere?

The first thing I did to get to the bottom of this was change the Jeep’s oil, figuring there would be significant metal shavings/bearing bits in it and the filter. Strangely, the 10W-30 that drained from my pan looked clean, and so did the inside of the oil filter. How could the main or rod bearings fail but not produce significant wear particles? That didn’t make sense to me. I poured in clean oil and fired the Jeep up to learn more.

Again I was greeted with a harsh, metal-on-metal knock. Confused, I decided I wanted to let the car idle for a little longer. Since I didn’t want to risk damaging the motor, I poured some coolant into the radiator, replacing what had billowed out during the overheating incident. Unfortunately, everything I poured in flowed straight back out onto my driveway. The source of the leak? The water pump.

I fired the engine back up, and kept an eye on that pump pulley — it was wobbling all over the place! I listened closely, and it appeared that this was the source of the knock! I’d never seen a water pump that loud before; I assume the bearing got so bad that the impeller on the back side of the pulley was hitting the engine block.

To test my theory, I used a screwdriver to slip the serpentine belt off the pump pulley; this way the water pump would not spin, since its pulley would no longer be powered by that of the engine’s crankshaft. The result: The knock went away!

This was great news, of course, but there was still a problem: The engine didn’t quite seem to idle as well as I’m used to. So to try learn if the straight-six had been damaged by the high temperatures caused by the failed water pump, I conducted a compression test by threading a pressure gauge into each spark plug hole, one at a time. During the compression stroke of the four-stroke internal combustion engine, the piston rises and squeezes the intake air/fuel mixture; in the case of the 4.0-liter engine, that air/fuel mixture should be squeezed by the piston to between 120 psi and 150 psi.

Sadly, the only cylinders that met the spec were one, five, and six. Two, three, and four all made just 60 PSI of compression, or about half what the engine’s spec calls for. This behavior reeks of a bad head gasket; I assume it failed between cylinders two and three and between cylinders three and four. It’s also possible the head cracked or warped.

In any case, I have to remove the top of that engine to see what happened. It’s going to be a long job, but I’d much rather do it than swap out an entire four-liter motor. Once my head job is done, it’s over ‚ I’m selling the Jeep to Tracy, and whatever happens after that is between her and her Jeep gods. I wouldn’t be surprised if it ran flawlessly for the next decade while not under my ownership.

It seems these Jeeps will do whatever they can to stay with me. Luckily, I don’t think it will take too much convincing to get this XJ to finally just let go; after all, it’s heading south, away from rust.

Rust-loving Jeep man, cofounder and EIC of The Autopian, Jason's friend. Email: david@autopian.com
Read All My Posts »
PrevPreviousWhat Cars Would Be Like In A World Without Glass
NextCold Start: One Of The Coolest Cars Named For A RockNext