Does A Daydreaming Designer’s Semi Sleeper Concept from 1990 Make Sense? 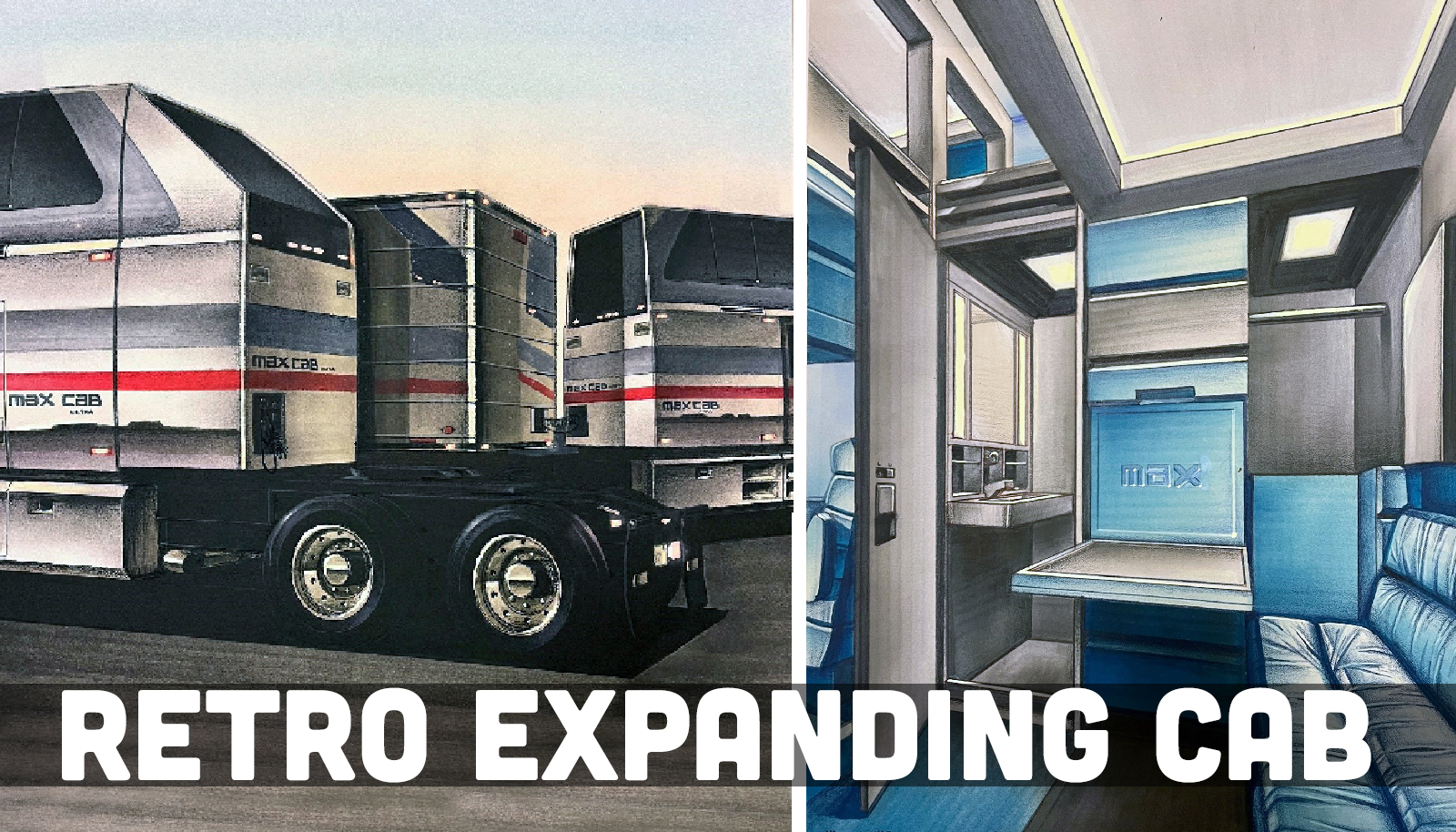 We’re rearranging our office at home, trying to make it less like a nineties attorney’s lair and more of place where black turtleneck-clad chin scratchers would chill. At one point, a box full of old work that I’ve done fell out of a cabinet, including a tiny mobile living space project. I’d forgotten about this one but since it’s both bizarre, old-skool dated, yet borderline plausible I figured it was a worth a laugh to share, especially since it looks at some different ways to work creating homes in oddly shaped and sized environments. It’s not a camper or RV, but it’s an adjacent mobile living space that might be even more common out on the highways.

This one’s not a fake retro design that I usually do. It’s a REAL vintage concept made during the time when MC Hammer was on the radio and Bill Cosby was still Greatest Dad Ever, so you get that angular look surrounding eighties technology. This was a school project so you know that a.) mechanical considerations took a back seat to idea generation and b.) if you do the math you will see that I’m old as dirt [Editors Note: (softly sobbing at realization of own age) – JT] . I was alive, as my kids say, in the last century.

The design challenge placed before us was aimed at a subset of people that lived in tiny houses before the ‘tiny house’ genre even existed: over-the-road truck drivers. The project was to design one of those sleeper cabs on semi trucks. These still exist today, and you can see some modern examples below. They range in size from just room for a mattress up to Taj Mahal-type spaces: 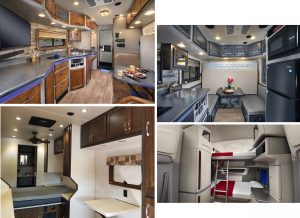 My initial question when I saw these was how they got that much into such a compact space: the answer is that they didn’t. There’s a massive, cumbersome addition and stretch of the original cab and wheelbase of the tractor.

Also, while some of these are as nice as high-end motorhomes, much of the design hasn’t changed since I researched this project decades ago. Besides the factory Peterbilt one in the bottom right corner, they still sort of have an eighties finished basement vibe to them.

Our challenge at school in 1990 was to use the space of typical sized sleeper cab and do as much with it as possible. To me, a kid without a grasp of the full limitations of the Real World, that meant going up…and out.

First of all, this was from a time when the overhead air deflectors were starting to appear on the tops of truck cabs for aerodynamics, forcing wind around the boxy trailer. However, quite often this space was totally vacant. By putting sleeping spaces up high, it could free up a lot of room below for living. Here’s a basic overview that twenty-year-old me for some reason forgot to make (or I’ve lost), so much older me had to make it right now (though all of the other images are from thirty years ago): 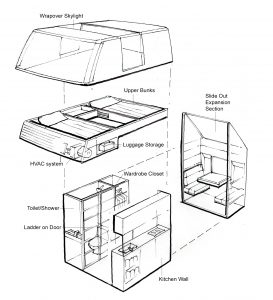 On the main level behind the driver’s compartment, there is a full kitchen on one side of the space. Note the ‘cove lighting’ (fluorescent when this thing was designed in pre-LED days) to give a taller ceiling feel. Yes, that’s a good old adjustable CRT TV and a high-tech microwave. The insets show an optional side door (that would reduce the size of the kitchen wall somewhat) and food storage and cabinets with dividers to stop the contents from moving around: 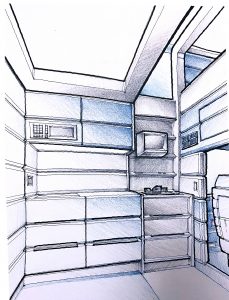 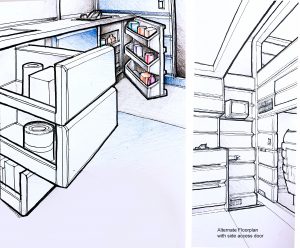 On the opposite side of the ‘downstairs’, a shower/toilet ‘wet bathroom’ with fold-down vanity sits next to a wardrobe closet. There’s a fold down table as well as a couch folding out of the closet door (the door iis split in two to allow access to the closet when the couch is down). 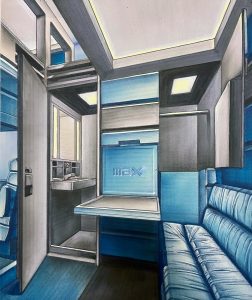 The sleeping spaces up top are accessible from a ceiling opening in the center, with a wrap-over skylight and big second windshield to bring in a lot of light (with shades to cover them, of course, though I doubt that would keep you in place if the truck hit something). A ladder on the door of the bathroom allows access to the upstairs. It’s possible that you could have a fold down floor between the two bunks to make one giant bed. 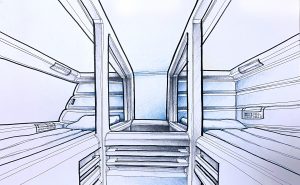 That front bunk is in the extension over the driver’s cab, and there’s room below for slide out luggage compartments.

Also, with these old renderings if you screwed something up there was no ‘undo’ or ‘history’ tab; you had to start over. Yes, I wasted my college life only getting high on magic marker fumes locked in a dorm surrounded by blocks of burned out vacant buildings in the heart of the Murder City (but I STILL love Detroit, a real-deal car guy mecca where I’d be more than happy to still live in).

Back to the truck cab – we’ve used the space pretty well, but what if you want MORE room? Here’s where it gets strange and would need a LOT more mechanical thought than I’ve put in – but is still possible?

The idea is that there is always space between the cab of the truck and the trailer to allow the trailer to have range of motion when going around turns. However, when you’re parked (or not towing anything) that requirement goes away. This sleeper would offer a motorhome-style slide-out back to give you a dinette area with skylight that could possibly also be used for an additional sleeping area. You would just need some kind of safeguard to prevent you from driving with the expansive module extended while towing a trailer.

The bar area behind the fold out table- what the fuck was I thinking? 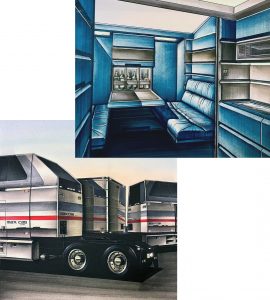 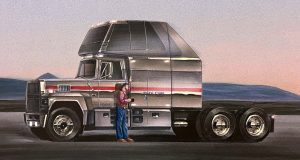 It is good to see that at least some imaginative people have pursued designs like this in the many years since this project was done. I did a search and found a few that with patent drawings: 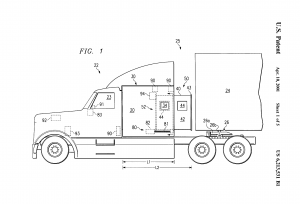 ..and an entrepreneur is searching for investors to manufacture and idea like the one below: 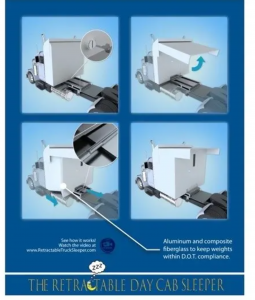 Up front, the existing factory cab could be outfitted to match the back, with more cove lighting, overhead console with audio and climate controls, plus the expected compartments for Hank Williams cassettes. Door panels bolt onto the existing truck doors and provide electric windows and sound system components, stuff that was not particularly prevalent around 1990. 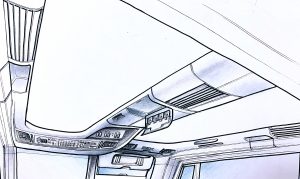 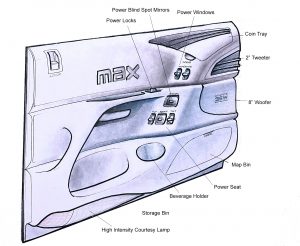 It’s all very much a humorously dated product of the eighties, but the ideas of using vertical space, natural light, and offering expansion options are still keys to successful small home design. Also, until self-driving trucks are prevalent, truckers will still exist and face the same challenges of living on the road as they did thirty years ago.

Why can’t more of the road warriors of today finally benefit from some of these motorhome-style innovations?