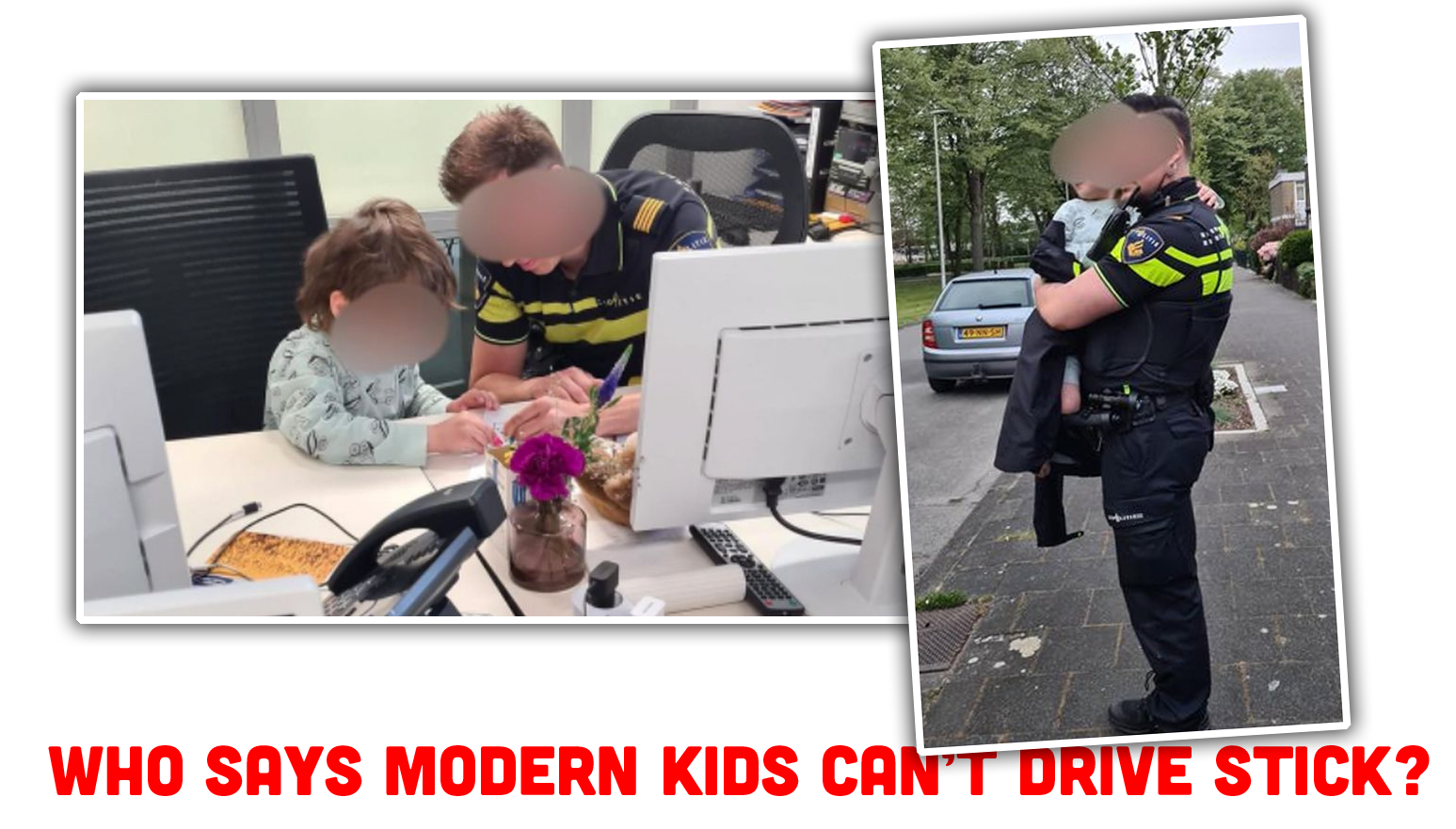 I know there’s plenty of good people out there who love cars but haven’t gotten around to learning how to drive a manual transmission. I mention this because I don’t want to make anyone feel bad when I mention that there’s a little Dutch four-year-old that seems to know how to drive stick. If it helps, he’s pretty shit at it, because he did manage to hit two parked cars on his short joyride, at least according to Utrecht police. Still, maybe this will be inspirational? If some daring and kooky little Dutch kid can do it, I bet you can, too. You’re easily as skilled as a Dutch toddler. And, look, even if he can drive stick and you can’t, I bet you have a lot more money than he does and don’t need therapy if you watch a horror movie.

The Utrecht Police Department described what happened on their Instagram page:

If, somehow, you can’t read Dutch (I know, I know) here’s a translation:

Yesterday we were sent at the end of the night shift to a report in Overvecht. Already there a four-year-old child would walk barefoot and in his pajamas on the street. The child was found by a bystander and placed in the car. The bystander thought that the child might be hypothermic and immediately called 911. Based on this information, colleagues rushed to the scene and took care of the reporter and the child.

@ravu_ambulancezorg has medically checked the child and gave him a comfort bear to put him at ease. There was no trace of the parents at that time. We then took the baby to the police station to find out where he came from (and to drink hot chocolate ????).

Not much later, a report of an abandoned accident site in Overvecht follows from the @politie_oc_ middennederland. A vehicle hit two parked cars. The name of the vehicle turned out to be the mother of the child, after which we made contact with her.

She said that her child is very enterprising. She spoke to the child on the telephone and then we saw that he made a collision with his hands and made a steering movement. This gave us the suspicion that the child might have been driving. Together with the mother and the child we then walked to the vehicle.

Meanwhile, the father arrived on the scene. At the car we asked if the child could show how the car worked. The child opened the car with the key and put the key in the ignition. He started the car, moved his left foot to the clutch and hit the gas.

So what appeared to have happened. When the child’s father went to work, the child woke up and grabbed the car key to go for a drive. The 2 parked cars were hit. The child then got out and ran away in his pajamas. Fortunately, this mini driver’s adventure has come to an end with a sizzle.

First, I have to admit, I’m really impressed with this kid. Four year old kids are basically ambulatory madness, from my experience, bonkers little squashy loons that bounce around performing acts of minimal, if any, sense. They’re as likely to put a dog’s ear in their mouth as they are to, say, open a door. So the fact that somehow this kid was able to open a car door, get in, depress the clutch, start the car, and get it any kind of mobile is a staggering accomplishment, the four-year-old equivalent of achieving low-Earth orbit.

How did those little legs reach the pedals from the seat? My guess is that the car may have been left in gear, and the little loon had been carefully watching his parents drive enough to know he had to push in the clutch to start it, so then when he got off the clutch the car lurched forward in, presumably, first gear, and from there the kid steered a bit and used the throttle (as he showed the cops and his parents he knew how to do) but eventually hit the two parked cars and stalled out.

I also love how police filled in what happened when the kid did a sort of pantomime: “we saw that he made a collision with his hands and made a steering movement.” I can picture it so clearly.

I hope he doesn’t get into too much trouble, because honestly I’d be more impressed than anything else. Of course, this could have ended far worse, and maybe precautions like hiding those keys or something wouldn’t be a bad idea. I know it sounds like rewarding bad behavior, but I’d also be tempted to get the little driver some kind of kid-sized motorized car: he clearly needs to drive, so may as well put him in something more skill-and-speed appropriate.

But look, I’m not here to tell anyone how to parent.

I'm a co-founder of the Autopian, the site you're on RIGHT NOW! I'm here to talk to you about taillights until you cry and beg me to stop, which I absolutely will not. Sorry. Hug? Also, David's friend.
Read All My Posts »
PrevPreviousBucking The Trend Of Ever More Expensive Cars, The Updated Kia Soul Cuts Its Most Expensive Trim
NextThis Is Where I Complain Some More About My Wife’s Piece Of Shit 2010 VW TiguanNext