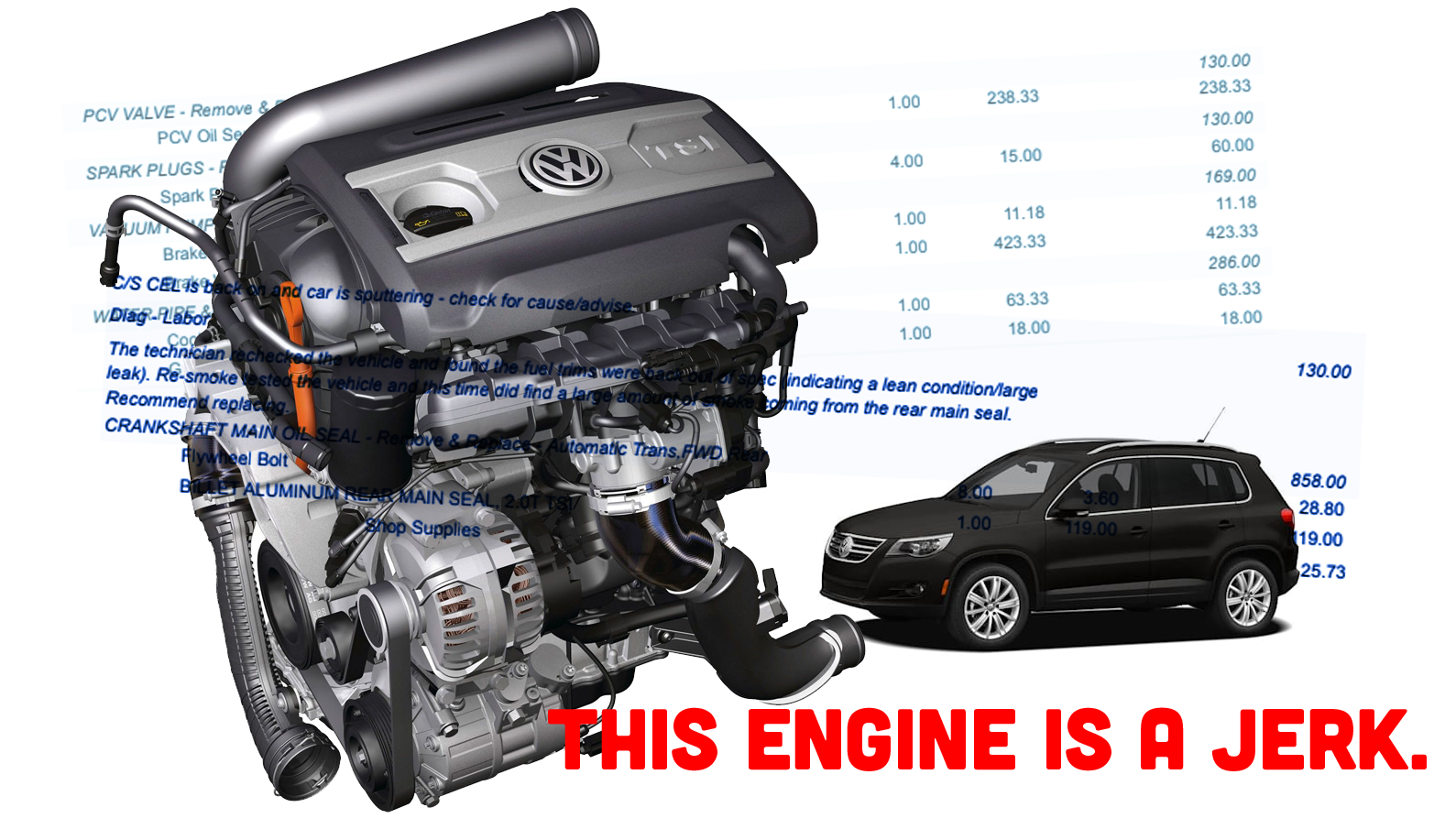 I just had one of those exciting experiences where you get to drop over a grand just to get your stupid car running the way its supposed to, less than a week after I pissed away a similar amount to take care of the same problem, which worked for all of 45 minutes before dramatically shitting the bed anew. I know that you didn’t ask, but I’m going to bitch about my wife’s 2010 Volkswagen Tiguan now, so you best make peace with the idea.

I’ll clarify right off the bat that this article may violate a few fundamental rules we try to live up to here at The Autopian. We have something called the Double E Rule, for example, which means that everything we run should include elements that are both educational and entertaining. It’s a good rule, but I’ll be honest, I’m not sure if I’m going to meet it this time, because all I want to do right now is complain about this fucking car.

Some background on the car: I got it in 2020 knowing full well that this car’s 2-liter TSI turbo-four came with some significant known problems, but I bought it anyway because my wife really liked it, and I gave up my right to tell anyone what car they should drive for rational reasons years and years ago.

Seriously, this is an important point: I have five absolutely ridiculous cars I cram onto our property, so there is no way I’m going to tell Sally what she can or can’t drive. She really loves the interior of the Tiguan, which is, admittedly, comfortable and airy and attractive and a very pleasant space to be in. She likes the way the car looks and drives (you know, when it’s driving) and while these aren’t necessarily rational reasons, cars never have been and never will be fully rational, so I just need to do what I need to do to make sure she has something to drive that makes her happy.

Of course, that doesn’t negate my right to bitch about it here, to all of you, which is what I’m doing now.

So, I thought I fixed this engine’s big Achilles’ heel when I had the timing chain and its crappy tensioner replaced, after bending a bunch of valves, which also meant a new cylinder head. I thought from that point on, everything would be nice and smooth.

What I forgot was the detail about how instead of building an engine with an Achilles’ heel, VW seems to have decided it would just make more sense to take a massive amount of Achilles’ heels, liquify them, cast them into a solid block, and just form the engines out of that, so everyfuckingthing on this engine has the opportunity to be a horrible point of failure.

This time, the point of failure was the positive crankcase ventilation valve setup, which is one of the known failure points of the 2-liter TSI engine, and, like the timing chain problem, likes to fail suddenly, without warning, and cause a colossal shitshow cascade of problems.

Here’s a little video about this hunk of crap that’s bolted to the top of the engine from our pal the Humble Mechanic, who fixed my timing chain:

Essentially, one of the several failure prone little diaphragms made out of some Germanic joke-rubber failed in Sally’s car and as a result, caused huge vacuum leaks that made the car run like absolute crap, with all the smoothness, power, and refinement one would expect from an early 1900s agricultural hit-and-miss engine, but without the charm:

Honestly, that’s running smoother. If there was a nearby sawmill I could have stolen one from, I might have replaced her engine with one of these.

After it happened I replaced the PCV assembly and looked at the old one, and the rubber diaphragms in there were crumbly and felt like a slice of parmesan cheese so it was clear what happened. Here, look: 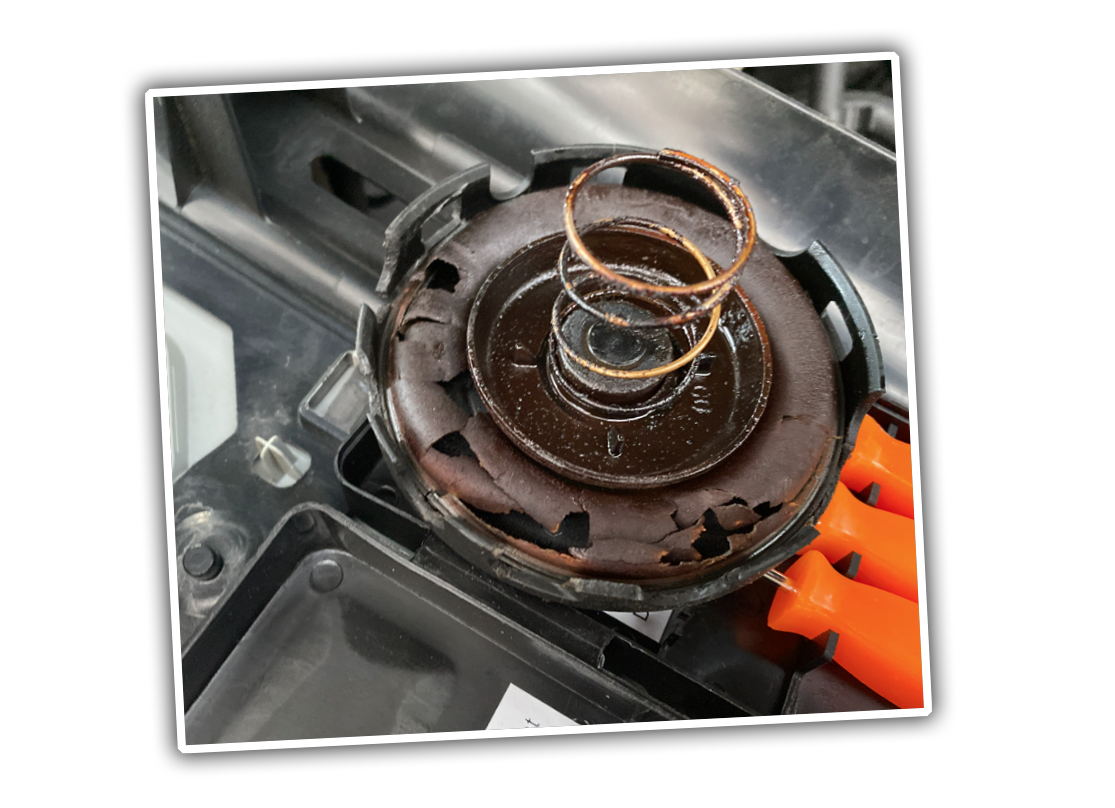 What was also clear was that my attempt to replace the PCV unit was an act of sad, misplaced optimism, because the damage was done, because the PCV is an unforgiving, cruel beast, and when it fails, the crankcase pressure goes all bonkers, and then seals start to get blown out, so you have oil leaks and more vacuum leaks and nobody is happy ever again.

So, I had a shop do a smoke test to see where the seals failed and the vacuum leaks were happening, and they found the bad seal on the brake vacuum pump, so they replaced the pump and gasket and put a better PCV valve on than the crap aftermarket one I got and we thought all was finally well.

About 30 minutes into the drive home, though, Sally called me and told me that all of a sudden everything was terrible again. Actually, even worse, as the car now had trouble even maintaining 45 mph or so.

We get it back to the shop, the car never even having made it home, and found that the rear main seal, which wasn’t showing any leaks prior, had failed, spraying oil and causing huge vacuum leaks and all that.

I wanted to be mad at the shop, but, really, I couldn’t. The seal tested fine, and while clearly it must have sustained some damage and been weakened, it was working and showing no damage, but only because the leak from the brake vacuum pump seal was so bad. So, when that was fixed, and engine crankcase pressures got to levels they’re supposed to be when everything is working, only then did the rear main seal have the dignity to fail, like it was somehow engineered to find the most expensive way to shit the bed.

Replacing the rear main seal is an ass-pain. You have to drop the transmission down and take out the flywheel to get to it and it’s a hard, laborious job.

Anyway, it’s fixed now, and Sally has her car back, and enjoyed driving it home and it finally feeling powerful and good, and this cruel VW’s siren-like hold over her has been re-established, clouding the cold, hard truth that the engine under that hood is a callow, devious machine designed to fling itself into disasters without warning and secretly mock you as your bank account gets depleted.

Sally’s not going to read this, and I don’t want any of you telling her about it, either. The damage is done. Let her enjoy her car, but between you and I, stay the hell away from these TSI engines. The cars they’re put into are charmers, enjoyable to drive and with great interiors, but all of that is bait.

This engine was the reason I’ve advocated for the adoption of one industry-wide turbo inline-four engine, because for the vast majority of cases, nobody really cares about who makes the inline turbo-four engine as long as it makes around 200-250 horsepower and doesn’t break.

I just can’t understand how VW could make an engine that fails on such basic shit as crankcase ventilation or timing chains – aren’t those solved problems?

I’m going to stop myself. The damage is done, the money is gone, the engine is fixed. Sally has a car she really likes, and I can keep hoarding weird low-horsepower shitboxes, and the world turns as intended.

Thanks for letting me vent. I just wish that stupid TSI had been able to do the same.

I'm a co-founder of the Autopian, the site you're on RIGHT NOW! I'm here to talk to you about taillights until you cry and beg me to stop, which I absolutely will not. Sorry. Hug? Also, David's friend.
Read All My Posts »
PrevPreviousDutch Toddler Who Somehow Knows How To Drive Stick Stole Mom’s Car And Hit Two Parked Cars
NextHere Are Three Ways That Car Audio Systems Trick Listeners Into Thinking They Sound GoodNext