On modern EV pickup trucks it seems that having some sort of fancy, powered tonneau cover is a big deal. The Tesla Cybertruck prototypes has one that rolls up like garage door, the new Hummer EV has one that seems to be some sort of rolling soft material, even I have one that I imagined, and Rivian has the one I want to talk about today. The company’s approach is interesting and kind of complicated, and visually seems a little mysterious–where does the thing go? Luckily, our pals at Munro broke through the mystery and took one all apart to see just how it works. Surprisingly, it’s a bit like a Pez dispenser. Let’s take a look.

Before we get to the teardown, you should see how the thing actually works:

You have eight rigid, interconnected panels, and they all somehow disappear into what appears to be the rear wall of the truck bed. Where do they all go? How does it work? Here’s the team at Munro to show you:

Essentially, what is going on is this: There’s a motor – which they note is like an upsized window regulator motor – that is driving gears at either side of the truck bed. One gear is driven directly from the motor, while at the other side is a “follower” gear driven via a shaft from the motor, running transversely across the bed: 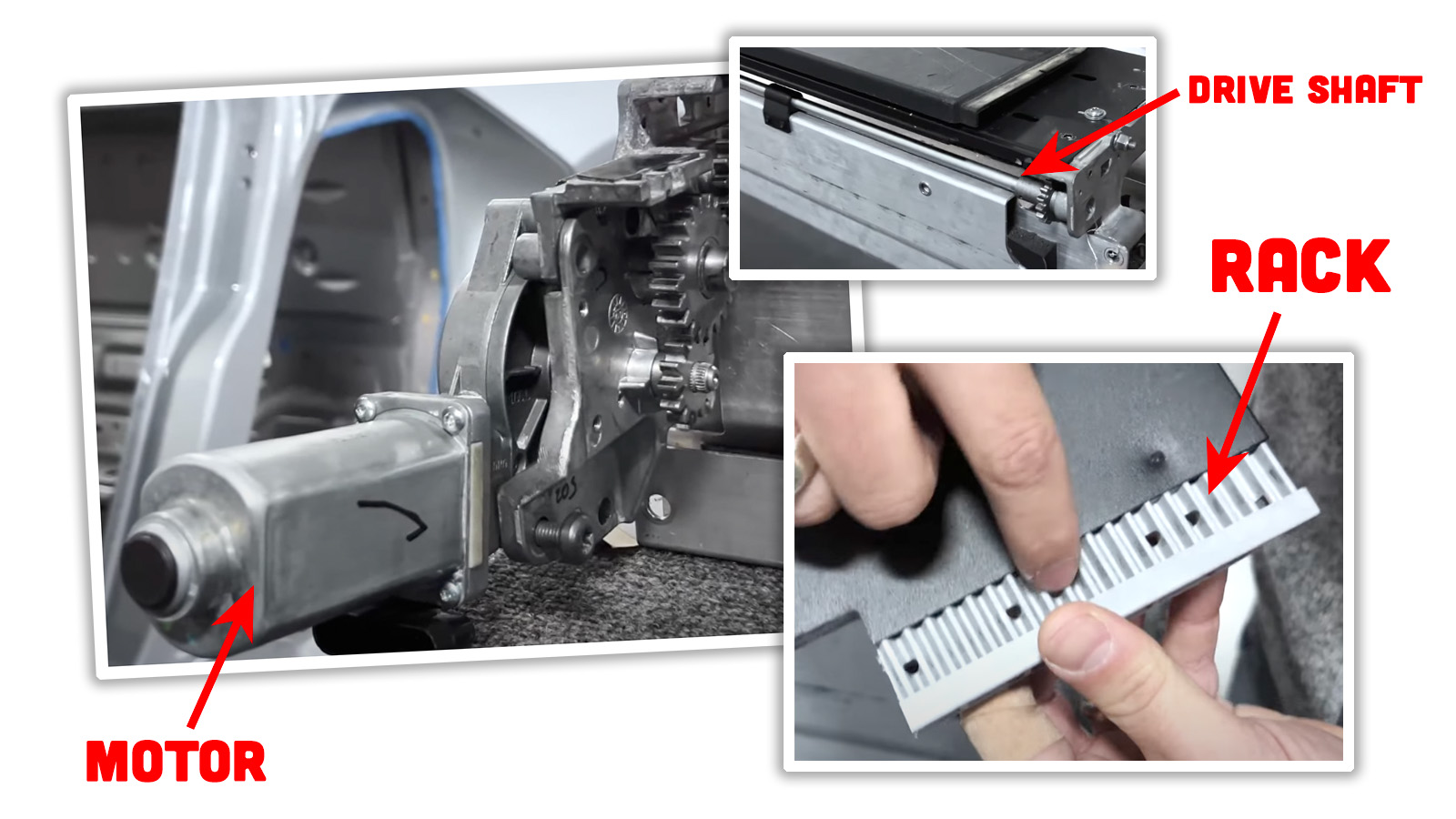 These gears engage with teeth on the outer sides of each panel – essentially racks, like you’d find in rack and pinion steering – and this is how the panels move forward or backward. What really makes the Rivian tonneau cover interesting, though, is how it is packaged when stowed away. The area that those panels get stored in is really quite small — just a rectangular volume between the rear wall of the bed and the cab of the truck. (In the following photo, the cab is ahead and the bed is shown at the bottom). 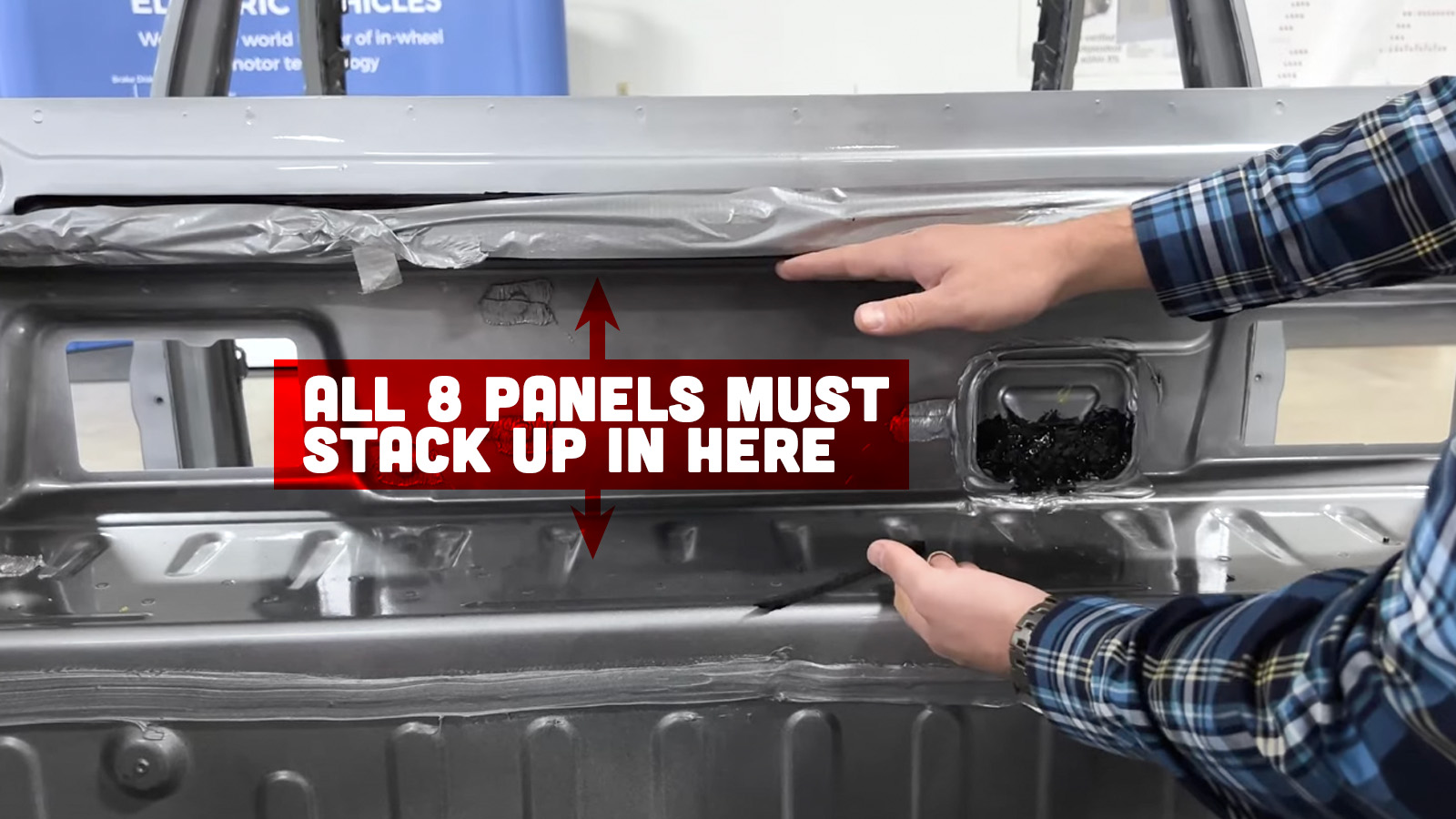 As you can see, that’s not a lot of space. The panels actually disconnect from one another and just stack, one atop the other, filling up that little rectangular volume almost completely. This seems a lot more efficient than, say, the roll-up type of cover seen on the Cybertruck prototypes, which appears to take up far more room when retracted.

And, once stacked up in that bed, Rivian’s tonneau cover panels compress a pair of leaf springs (well, really a quartet) that keeps the panels in compression and ready to climb back out of their bin and cover up the bed. 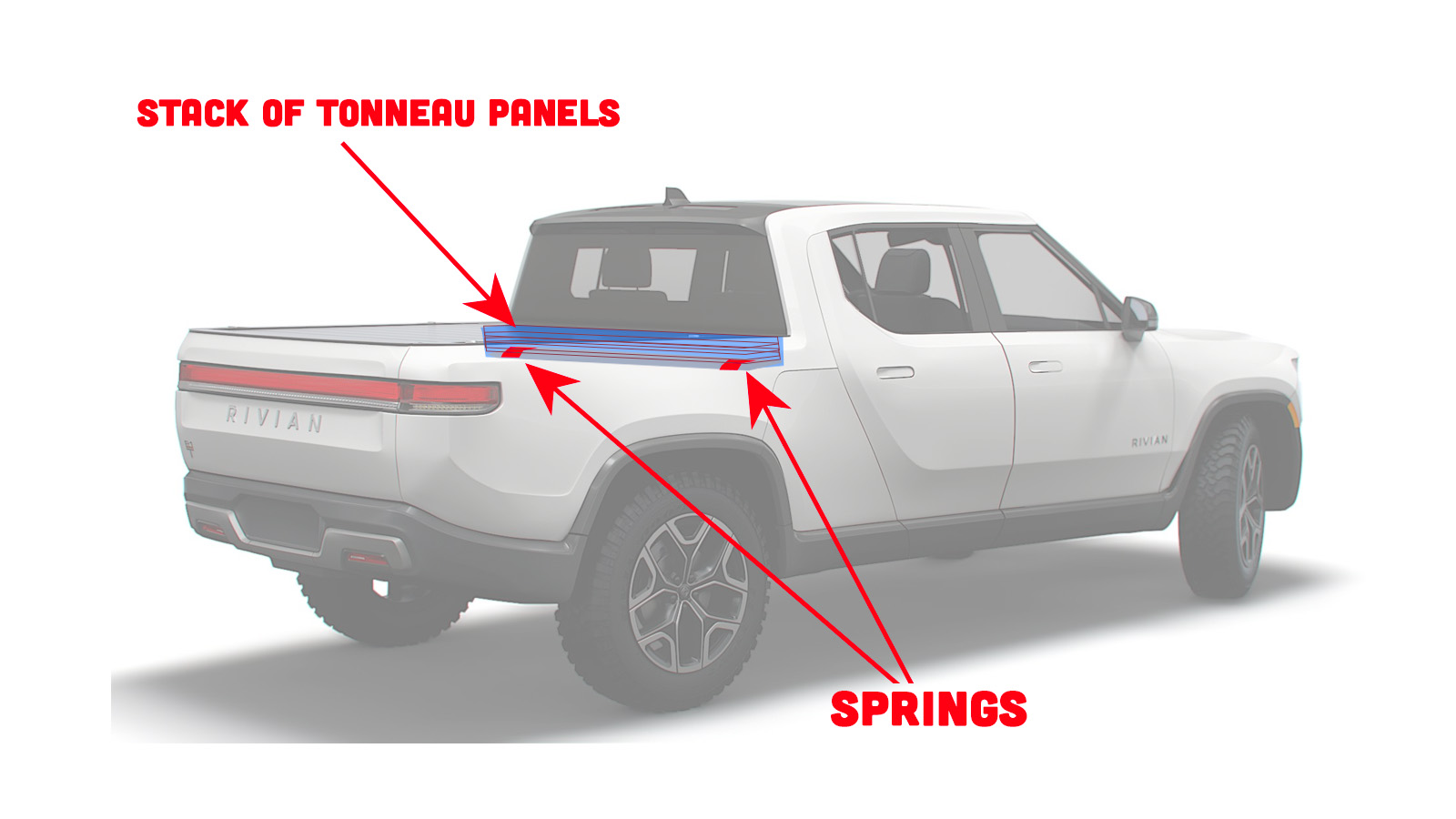 Part of Rivian’s uniqueness is that huge “gear tunnel” storage area between the cab and bed, so the R1T can’t impinge into that area to store the tonneau. If they want a retractable tonneau, the little rectangular volume of space they’re using is all they have.

As is often the case in automotive engineering, packaging constraints led to something incredibly space-efficient, though the tradeoff is that the cover is essentially being built and disassembled every time it’s used or retracted. As you can imagine, that introduces some issues, some of which Munro addresses here:

The big issues mostly have to do with things getting out of sync: the shaft transferring power from the motor to the gear at the other side can act like a torsion bar, for example, or the teeth of the gears aren’t meshing deep enough into the rack and are slipping, which causes the panels to jam up, annoyingly.

These issues have been showing up a fair amount, based on reports from owners in forums, and Rivian its has promised to fix them, for free, soon. Munro’s team (which is awesome, and whose YouTube channel you should subscribe to) had a few good suggestions to solve these issues, ranging from a second motor to eliminate the left-right torque differences or taking a page from the tracked-vehicle world of tanks and bulldozers, where the teeth from the gear actually protrude through the rack.

It’s all fascinating, really. Especially when you consider that, really, this is just a cover for a big box. But, with the competition being so fierce, everything like this matters. Anyway, watch that video and be mildly impressed by the level of engineering going on for freaking tonneau covers.

I'm a co-founder of the Autopian, the site you're on RIGHT NOW! I'm here to talk to you about taillights until you cry and beg me to stop, which I absolutely will not. Sorry. Hug? Also, David's friend.
Read All My Posts »
PrevPreviousCould A Two Door Model Pull a Coup D’Etat on Boring Crossovers?
NextDodge Challenger, DeSoto Custom Club Coupe, Honda CX500 Turbo: Mercedes’ Marketplace MadnessNext