Earlier today, in the large, saltwater/Gatorade/10W-30-filled hot tub where all Autopian meetings are held (the Gatorade and oil somehow keep the saltwater from shorting out our Newton MessagePads that we use to make site content) we came to a realization: nobody talks about Mercurys. I mean, sure, part of that is because there haven’t been Mercurys built since 2011, but there are plenty of other dead brands that still have some sort of plot of real estate in our collective minds: Saab, Plymouth, King Midget, DKW, Iso – hell, we even ran something about Pontiac today. Fucking Pontiac! So why not Mercury? Why does everyone forget to remember Mercury? Well, we at The Autopian are in the business of solving shit, not whining about it like some baby made of angel food cake. So, with that, I’d like to introduce Mercury Monday!

Now, I get that the pool of forgotten yet worth-considering Mercurys isn’t huge, so I wouldn’t expect this to be a long-term thing, but at least we can say we did our part. And I want to start this one with a car that I think is generally forgotten, at least in the mainstream mind: the Mercury Cyclone. 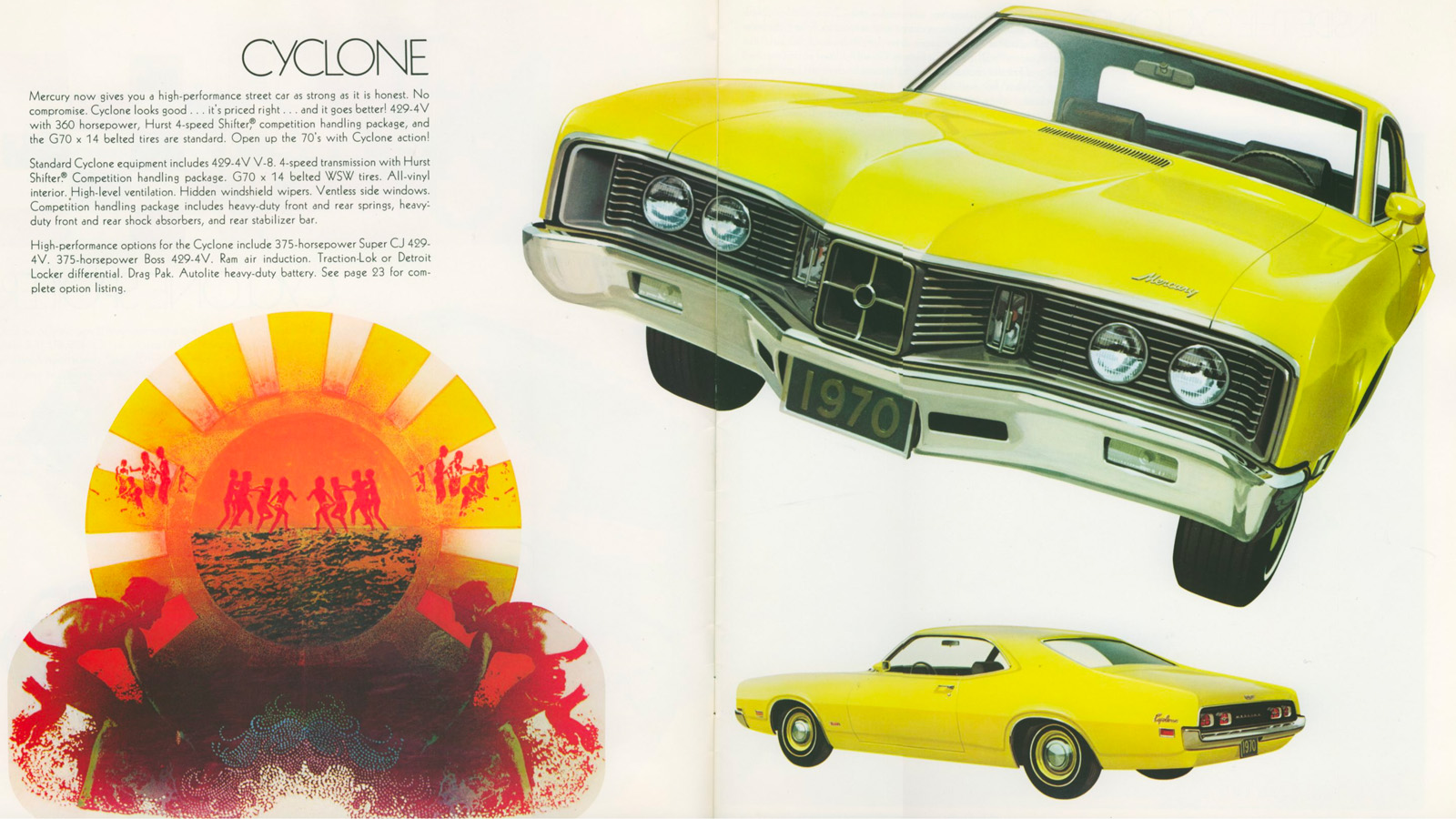 The Cyclone was a muscle car, but when people think of Ford-made muscle cars, even many gearhead people, your list will be dominated by Mustangs, with maybe some Cobras thrown in, maybe even a Torino, and if you absolutely demand a Mercury, you’re going to get a Cougar. Sure, there are people out there who remember the Cyclone, but it’s proportionally a vole next to the bear that is the Mustang.

Specifically, I want to talk about the fourth-generation Cyclone, because it’s absolutely, over-the-top bonkers, and, if we’re honest, that’s exactly what a muscle car is all about. Yeah, sure, they go fast in straight lines and burn rubber and make noises that cause you to have complicated feelings in your bathing suit zone, but if you wanted speed and a rational design you’d get a GTI or something.

But you don’t, because you’re a hypothetical deadbeat muscle car owner who eats raw trouble-steaks for breakfast and washes it down with a bottle of 1600-proof danger-gin as you blast by office buildings and fix everyone you see with a look so full of raw, throbbing, humid sexuocity that you make everyone of every gender pregnant in the surrounding three blocks.

That’s who the Mercury Cyclone was for. I’ve actually talked about these before, because hot hams, people, just look at the fucking thing: 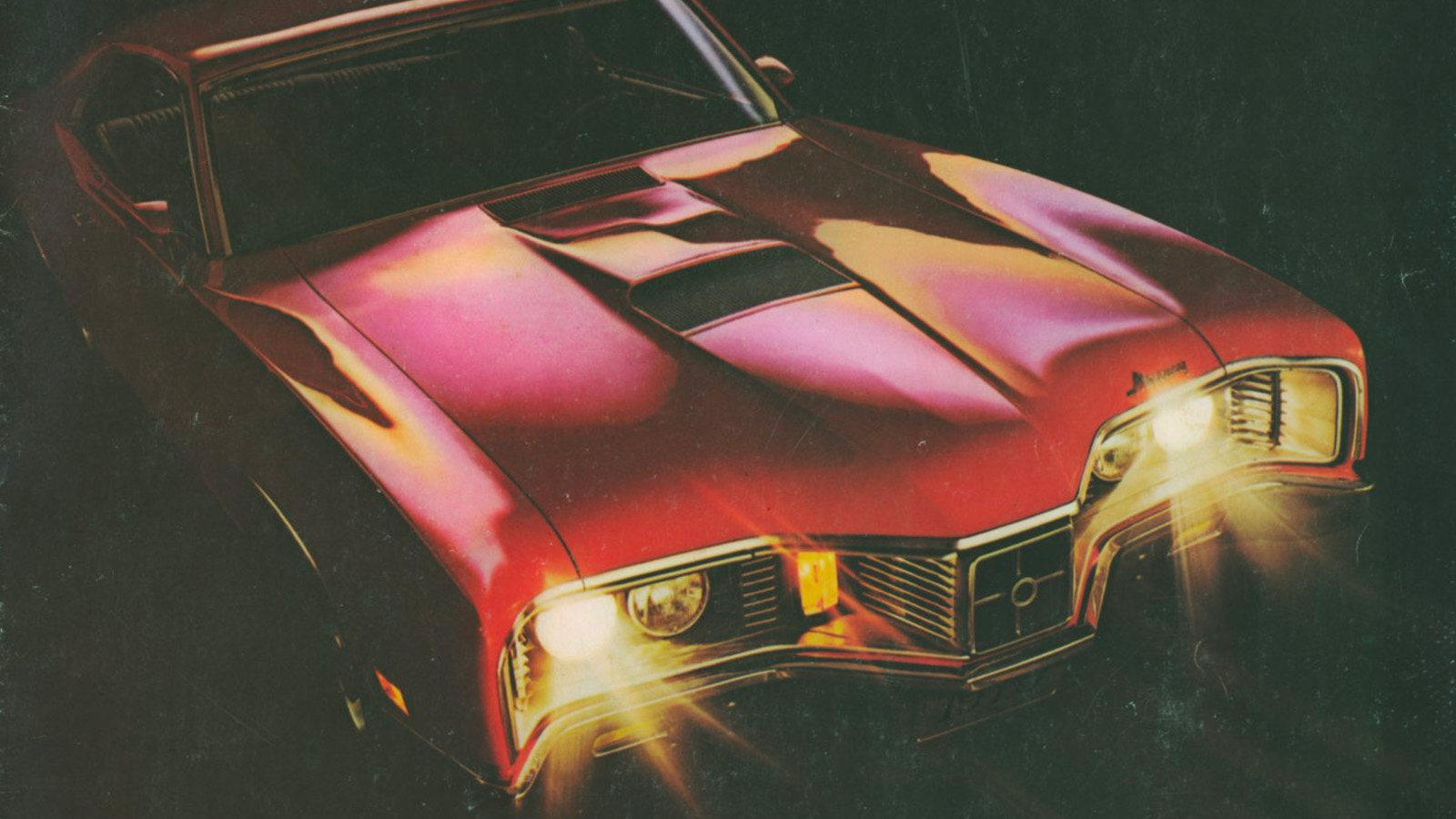 Come on. This car is all madness and purposeful aggression and yet somehow stylish, too. It’s got a flapjacking gunsight in the center of the grille, which is already forming a crazy-ass proboscis that juts out over a foot from the rest of the front of the car, flanked by a pair of vertically-oriented amber driving lights whose purpose must be to help blind you before you get smacked into nothingness by this wild juggernaut of libido and speed.

Sure, the Mustang Mach 1 is cool, but is it Cyclone Spoiler cool? 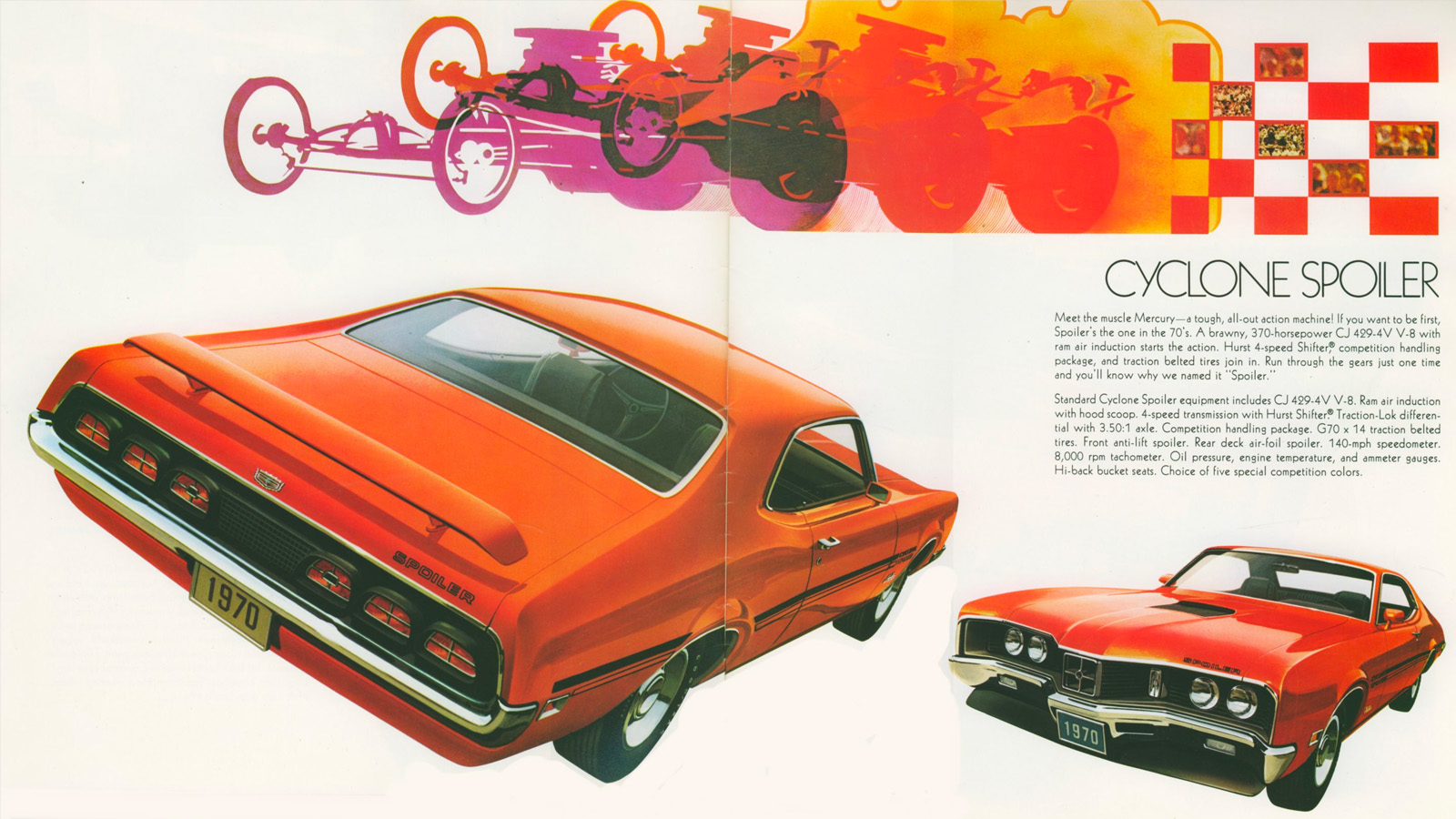 I’m not so sure it is, yet it’s the one that gets all the limelight. And it’s not like the Mustangs are really much different mechanically: The Cyclone is a Mustang sibling, packed with the same 429 V8 Cobra Jet engine (remember, that’s over seven liters) you could get in the Mach 1, and the Cyclone Spoiler (that “Spoiler” badge, right there under that little wing, often called a “spoiler” itself, is pleasingly confusing, like it’s a label for the part) also had a big-ass oil cooler and could be had with a locking differential.

Plus, look at all those taillights! Those look like the same units that came in fours on the backs of Mercury Comets, so I guess they just figured the Cyclones needed 50% more, because why not? 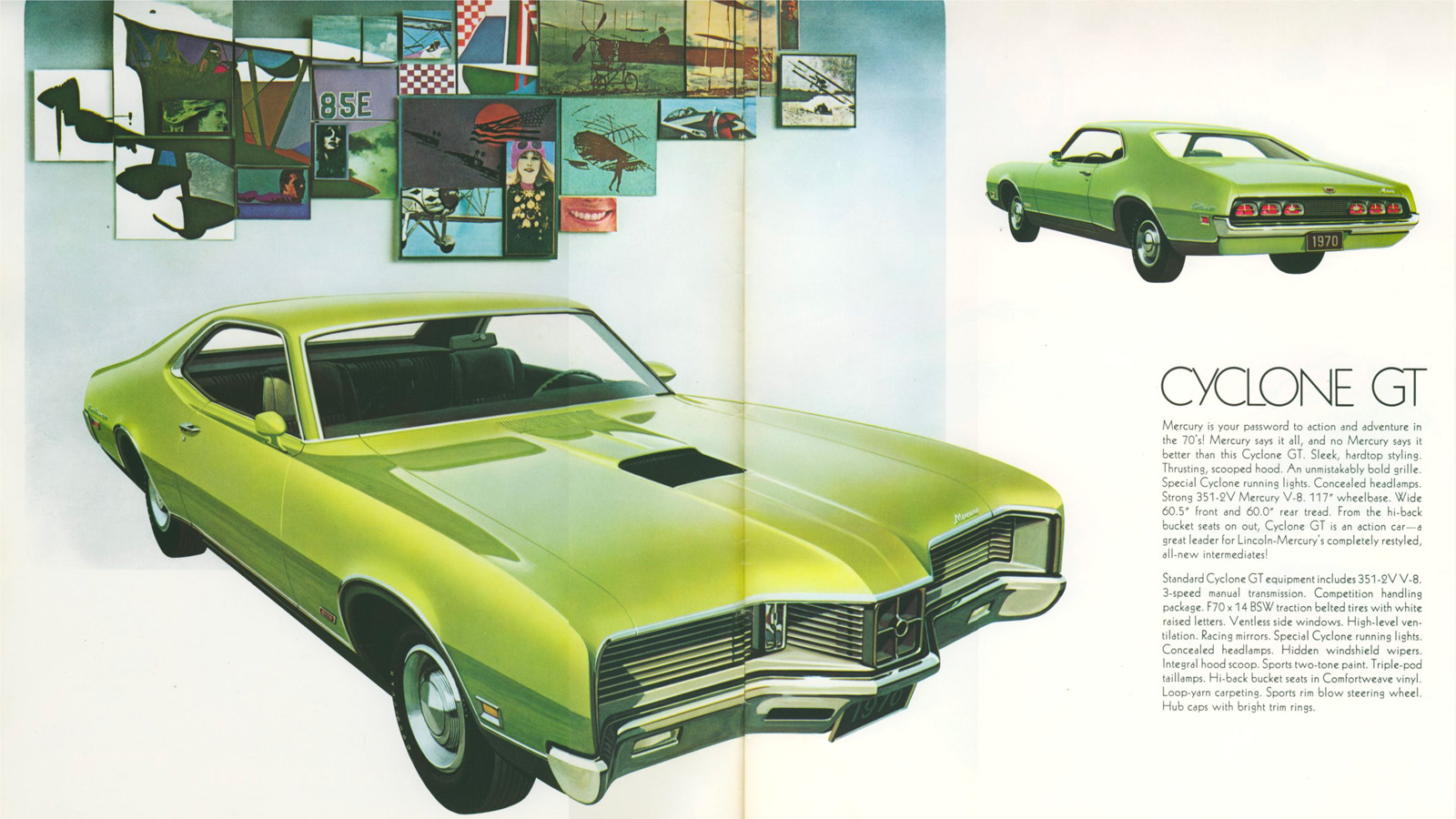 If you wanted to convey that you were both an animal yet somehow refined, like a gorilla in a well-tailored Brooks Brothers suit, you could get the Cyclone GT, which was a bit more genteel. Even though, underneath, it was still all id-driven madness.

The Cyclone certainly earned its muscle car chops on the track, too, with the fourth-generation Cyclones I’m going on and on about here setting NASCAR records, like how the 1972 Daytona 500 lineup was made up of 30% Cyclones, or how the Woods Brothers’ 1971 Cyclone won 18 times out of 32 races. 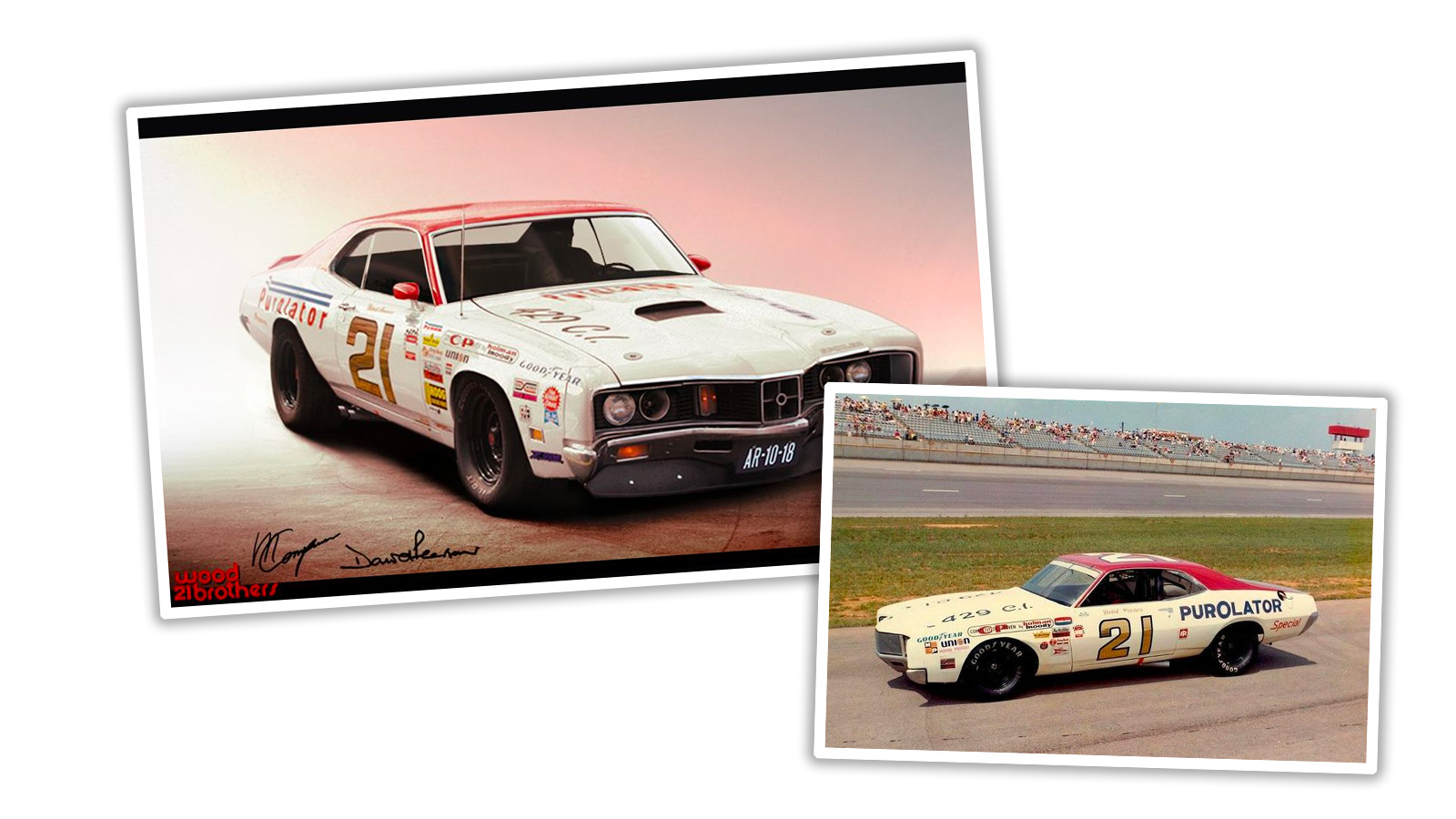 Among people who know, there’s respect for the Cyclone. But overall, especially compared to the other muscley Fords, the Mercury is severely overshadowed. There are no songs about Cyclone Sally or movies with a custom Cyclone named Eleanor or modern versions of Cyclones running into lampposts after your local Cars and Coffee meetup ends.

Because it’s a Mercury, and everyone [Ed Note: Except Alan Jackson. -DT] forgets about Mercury.

But not us, and not today.

I'm a co-founder of the Autopian, the site you're on RIGHT NOW! I'm here to talk to you about taillights until you cry and beg me to stop, which I absolutely will not. Sorry. Hug? Also, David's friend.
Read All My Posts »
PrevPreviousThe Last Pontiac Ever Built Ended Up In A Museum. And By Museum I Mean An Insurance Auction
NextGreen With Envy: Cold StartNext