Welcome back to Shitbox Showdown, the new home of challenge pissing (click this link at your own peril). Thank you Matt for bravely stepping in on Friday with two cars for people who take things from hotels when they check out. Not soaps and shampoos, mind you — more like oil paintings and the receptionist. In all seriousness, the flu is no joke this season, so get those shots so you won’t feel like you’ve got a glob of JB Weld in your sinuses and a stuck closed thermostat for more than a couple days. Anyway, let’s see how glass transfer case versus possible bad transmission played out. 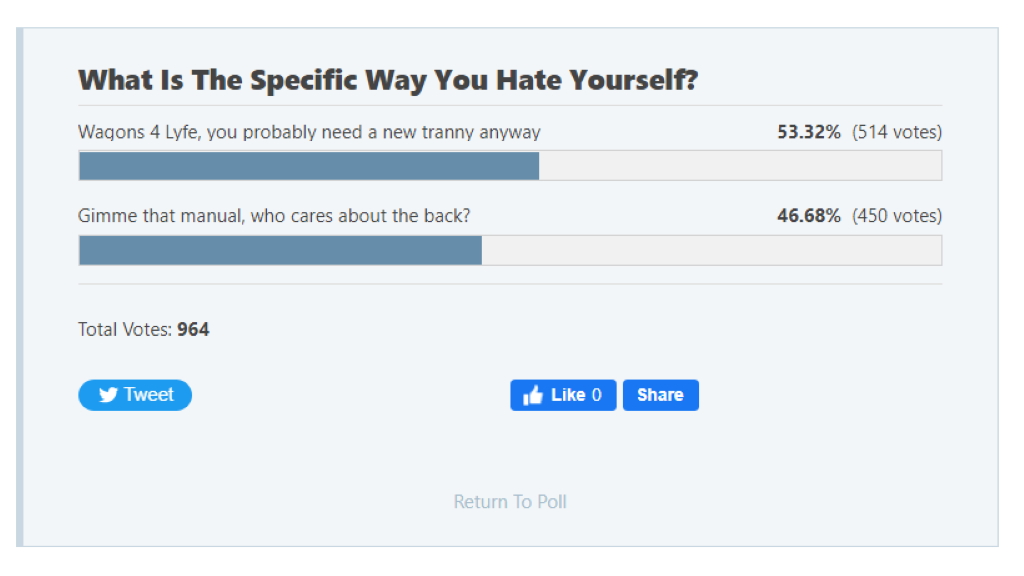 As expected, this one was tighter than a pair of American Apparel disco pants, with the three-pedal X-Type just barely taking the lead. I feel like the correct answer here is to buy both and build your own manual X-Type wagon, but that’s probably a lot more time than you’d want to invest in old Coventry tat.

While Chrysler is currently part of the monolithic Stellantis group, it’s a brand with a long history of shacking up with other automakers. From its acquisition of AMC to its buyout by Fiat, the Pentastar has had a rocky road over the past few decades, especially in the DaimlerChrysler years. A “merger of equals” which was anything but, the period between 1998 and 2007 was marred by poor quality control, soaring losses, and alleged cultural clashes. Oh dear. If the sibling rivalry was intense through the duration of the merger, let’s throw some fuel on the fire by pitting one Mercedes-Benz product against a Chrysler car. That’s right, we’re going Daimler vs. Chrysler. 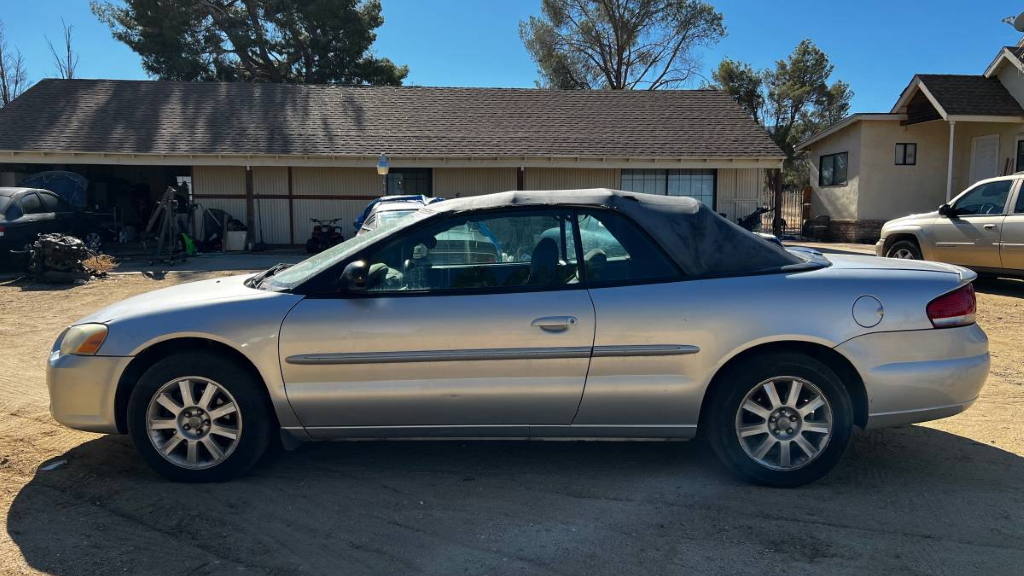 The second-generation Chrysler Sebring was yet more evidence that the Chrysler in Daimler-Chrysler was silent. Sure, it packs some sitcom star appeal having been driven by Michael Scott, but this was really the darling of the rental car lineup circa 2006. 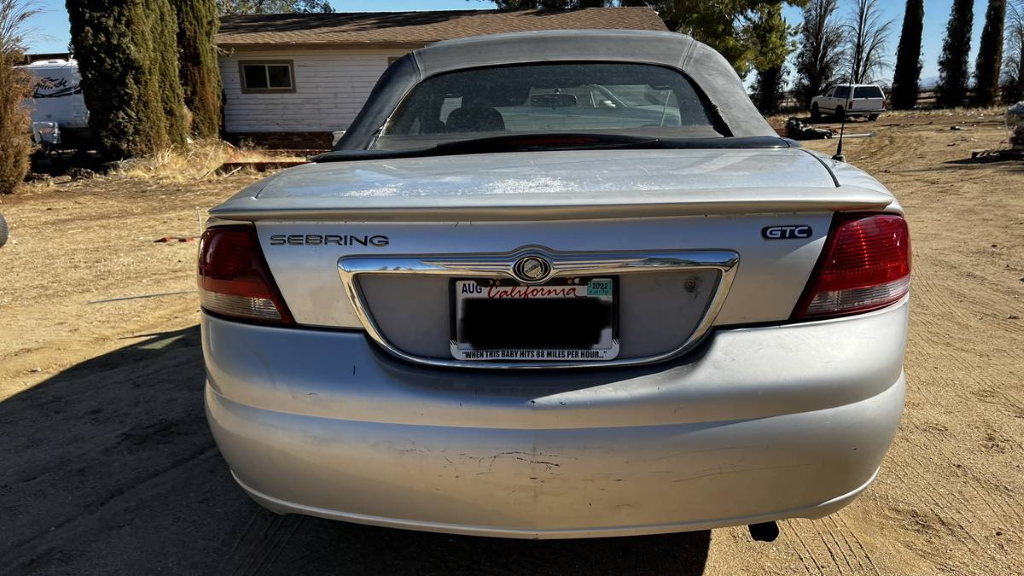 While it’s hard to believe that 2006 was 16 years ago, just one glance at this Sebring is enough to dump the icy Gatorade cooler of reality straight onto your head. The fabric roof appears careworn, the clearcoat is clearly bleached from years out in the desert sun, and the lights have done that lovely frosted glass thing that takes heaps of elbow grease to sand off. On the plus side, life in the desert means that the pinch welds look really clean, the electrohydraulic cabriolet top still works, plus the overall look can almost be described as rustic. You can’t fake this sort of patina.

The seller hasn’t included a picture of the Sebring’s interior, although you’re not missing much. Loads of fake wood and some seriously cheap plastics suggest a lack of money and imagination, particularly in contrast to earlier Sebring cockpits. 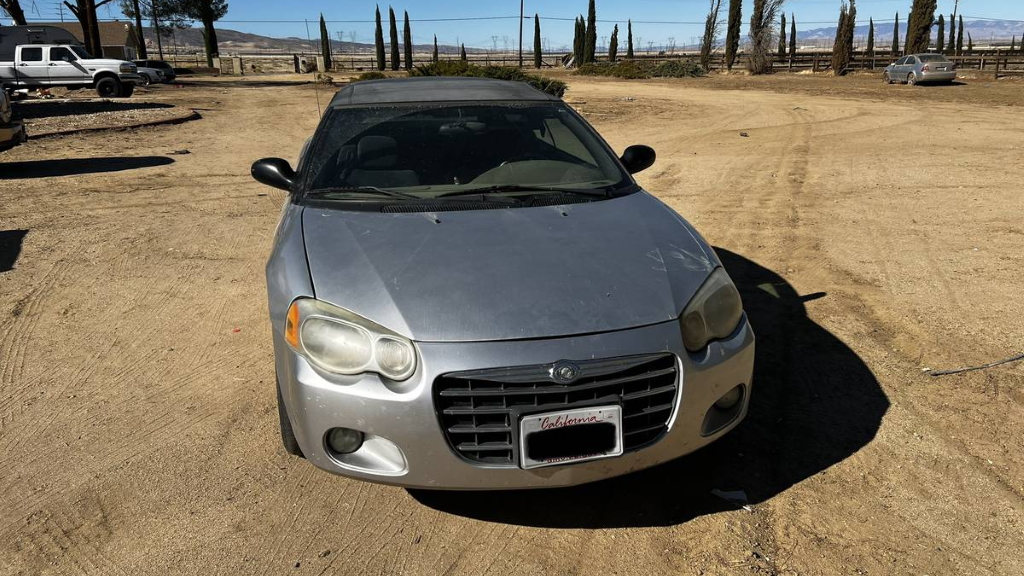 Although earlier 2.7-liter Chrysler V6s are pure, unmitigated piles of shit, it’s relatively rare for these later models to suffer from the same sort of catastrophic sludge you’d see on older Intrepids and the like. However, the 41TE automatic gearboxes in these Sebrings aren’t exactly known for being robust. Still, judging by the Pacifica parts car clearly visible in one pic, the owner of this cheap cabriolet likely knows exactly what they’re doing. Plus, everything for this car should be cheap and readily available at your local auto parts store. 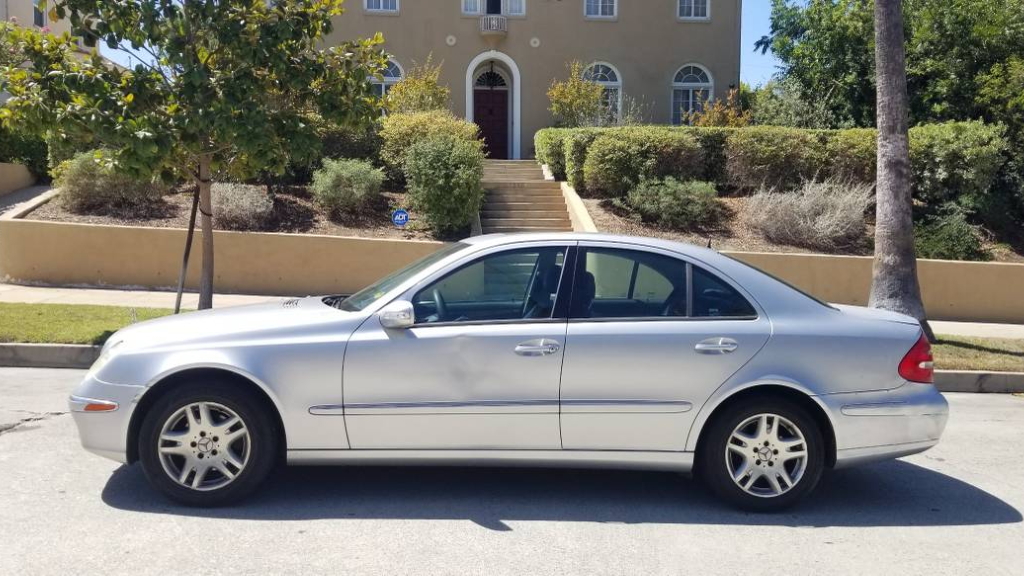 Runs/drives? In the words of the seller, “very much good.”

Ah, the W211 E-Class, now that’s an attempt at righting wrongs. With the W210 E-Class of the late 1990s having developed a reputation for dodgy quality control and shocking corrosion, the W211 E-Class was part of Mercedes-Benz’s rebuilding season. It brought in new technology, more modern design, and better build quality than its predecessor, and while it didn’t restore Mercedes-Benz’s reputation, it certainly didn’t hurt cred. 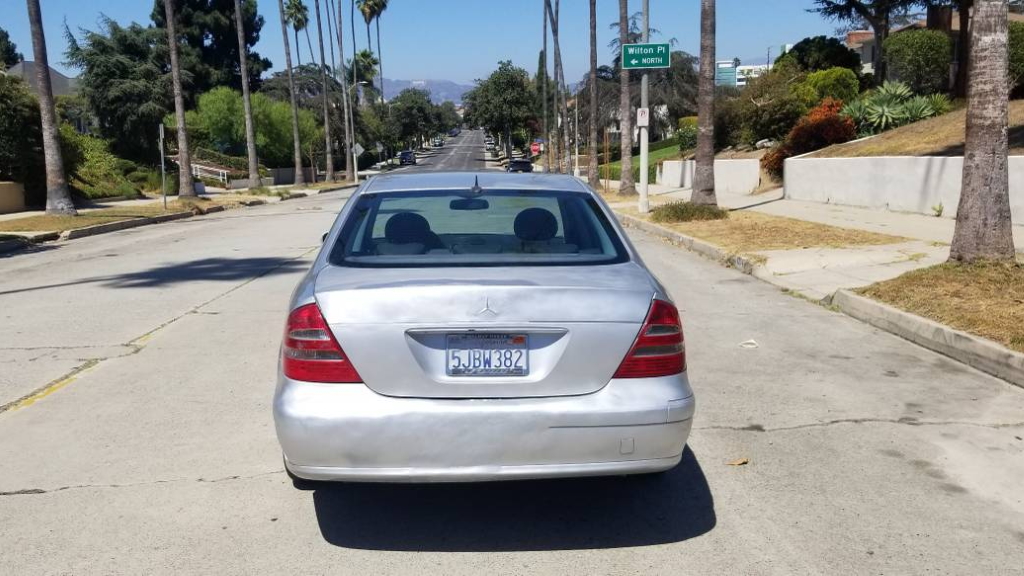 Then again, the appearance of this particular example isn’t doing Mercedes-Benz’s image any favors. What the actual hell is going on with the rear end on this thing? It looks like several kilograms of body filler have been smeared on with a trowel, resulting in the real-life version of excessive airbrushing. Add in an awful paint job with overspray onto the license plate, and you get one haggard Merc. Granted, it shouldn’t be too hard to source a used trunk lid and bumper, but that’s assuming there’s no damage hidden beneath. 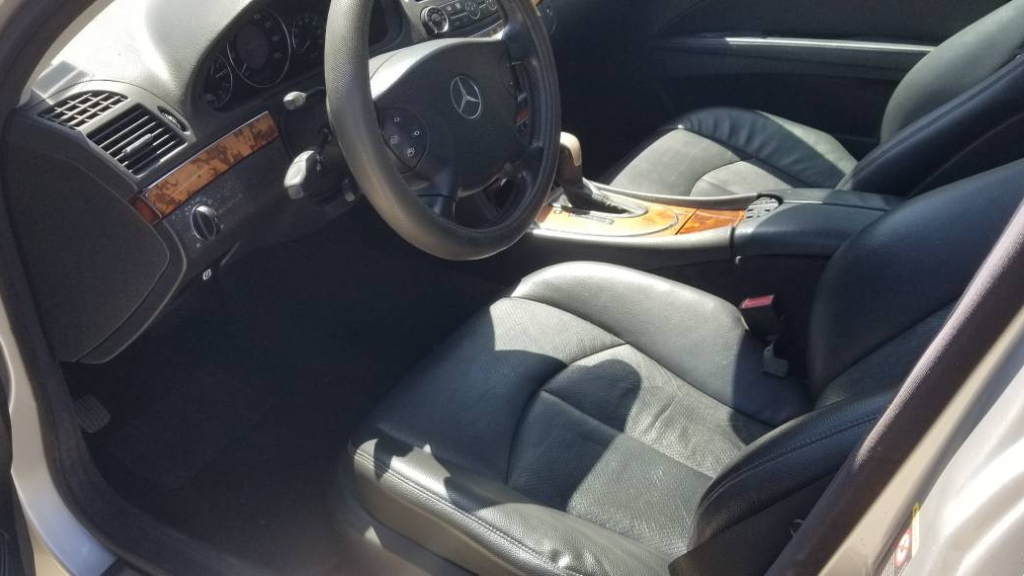 Fortunately, the rest of the car looks fairly alright. There are a few dents and blemishes here and there, but nothing out of the ordinary for a high-mileage car. The seats still look to be in remarkable shape for 254,000 miles and the owner attests that this thing’s passed California smog testing. What’s more, the dashboard doesn’t look like a Christmas tree at all, with the multi-function display showing no current faults. As far as cheap cars go, ugly beats broken almost every day of the week. 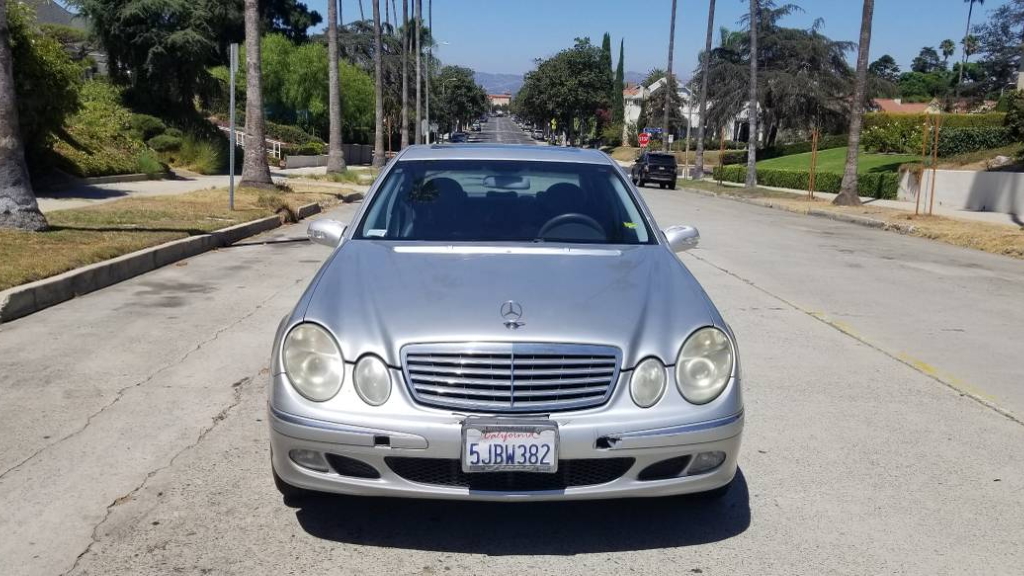 You’d expect any German car with nearly a quarter of a million miles on the clock to be an absolute nightmare, so it’s not surprising to hear that there’s something worth looking out for on these early W211s. See, instead of a conventional braking system, Mercedes-Benz equipped these cars with something called Sensotronic Brake Control, or SBC for short. Instead of using a traditional master cylinder, SBC is an electrohydraulic system that keeps brake fluid pressurized to between 2,000 psi and 2,300 psi. The thinking went that this system could be used for more precise stability control activation and several convenience features including soft stop. Unsurprisingly, these SBC systems fail fairly regularly, to the point where Mercedes-Benz USA has extended a goodwill service campaign to 25 years and unlimited mileage. However, as this particular E-Class doesn’t have air suspension, SBC is about the only serious failure point on it.

So, are you on team Daimler or team Chrysler for this one? While the Merger of Equals is now ancient history, relics of this era still roam our roads. Choose wisely.

Thomas is a Nu Rave-blaring, heel-toe downshifting, maple syrup-swilling, chassis-geeking, junkyard parts-hauling, floppy-haired scenester who's been writing about cars since college. His current ride is a 2006 BMW 325i with the six-speed manual gearbox. Instagram: @thomas.hundal Twitter: @thomashundal
Read All My Posts »
PrevPreviousWho Let The Gipper Drive?: Cold Start
NextThese Are The 20 Most Durable Cars On The Road According To A New StudyNext