It’s absolutely true that combustion-engined cars catch fire plenty, and have been doing so for well over a century. Gasoline is flammable, and fires do happen, no question. But even with that in mind, modern EVs are changing the car-on-fire game dramatically, something that’s been most recently seen in places like Florida that have been hit with hurricanes and the resulting salt-water flooding. Salt water wreaks havoc on EV batteries, and EVs have been catching fire at alarming rates. Even worse, the way these cars burn is so dramatically different than how gas cars burn that it’s requiring new methods to deal with the fires, not all of which are ideal. This Good Morning America clip shows these issues in a stark way that made us think it was worth showing you, in case you missed it.

Here’s the clip; also, I don’t recognize any of these people, which reminded me that I haven’t watched GMA since that guy who sounded kinda like Bullwinkle was a host. But that doesn’t matter, just watch:

So, what’s going on here, exactly? On a very, very basic level, the saltwater is interacting with the chemistry of a lithium-ion battery to cause shorting and thermal runaway conditions. We’re currently finding a proper EV battery engineer to do a deep dive on this, but until then it’s just grimly fascinating to see how these fairly unexpected (well, in the layperson’s eyes) issues that come with, for the first time in America, a genuinely significant number of EVs on the road.

[Editor’s Note: Generally, we don’t like to discuss technical topics without input from engineers, but this video is fascinating unto itself, so we figured we’d show it while we await input from battery engineers, who can dive a bit deeper into why this all happens. -DT]

I mean, this is pretty unprecedented when it comes to car fires: dumping a car in a water-logged ditch an attempt to keep it from igniting again? 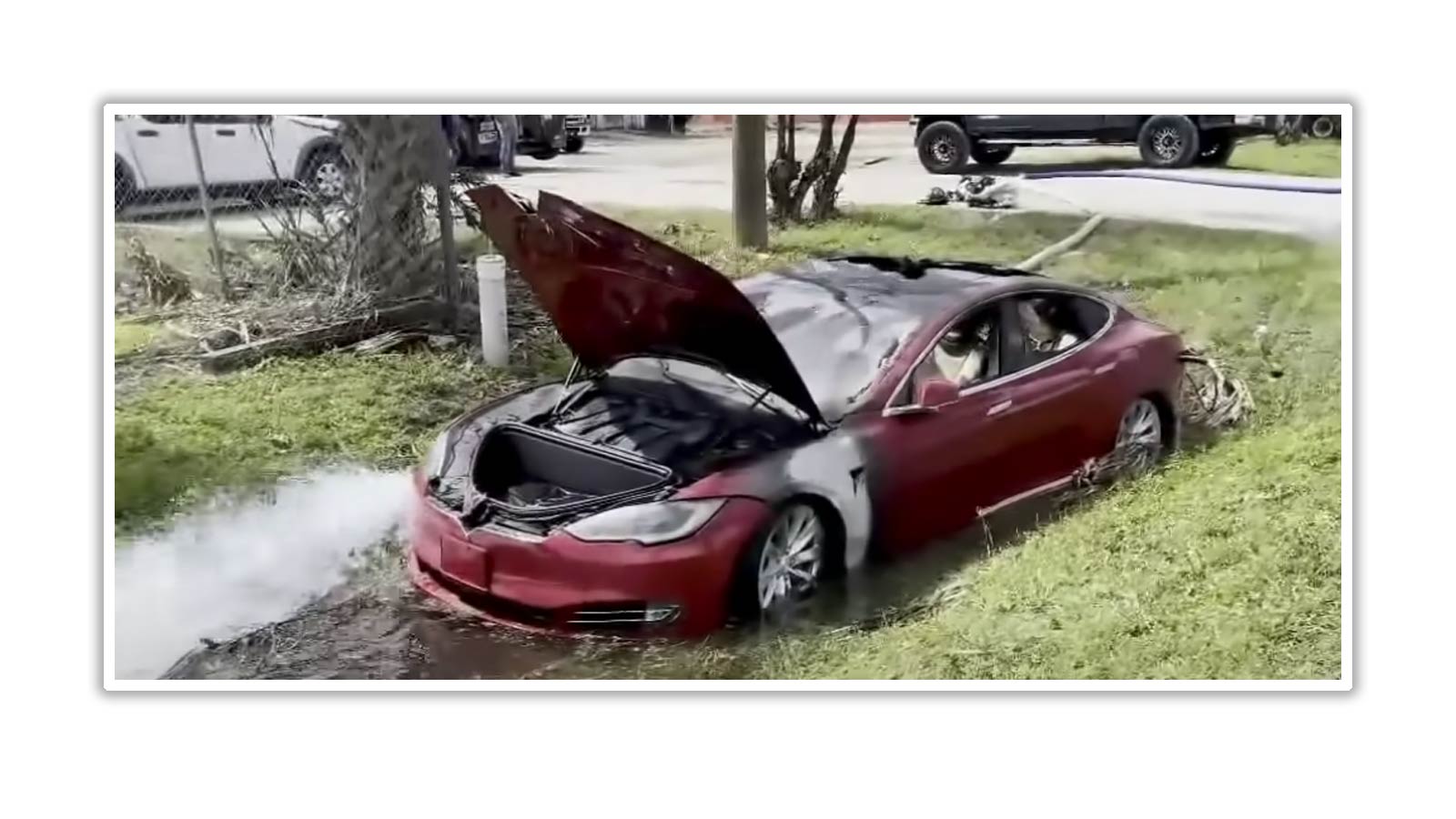 Lithium-Ion batteries are incredibly energy dense, and are susceptible to a process known as thermal runaway, where the battery “enters an uncontrollable, self-heating state.” This is partially why EV fires require about ten times as much water to extinguish, and why the batteries, which may still be producing heat internally after initial fires have been put out, can reignite — even a significant amount of time after the initial incident.

That’s why the storage of burned-out EVs in Florida look like this: 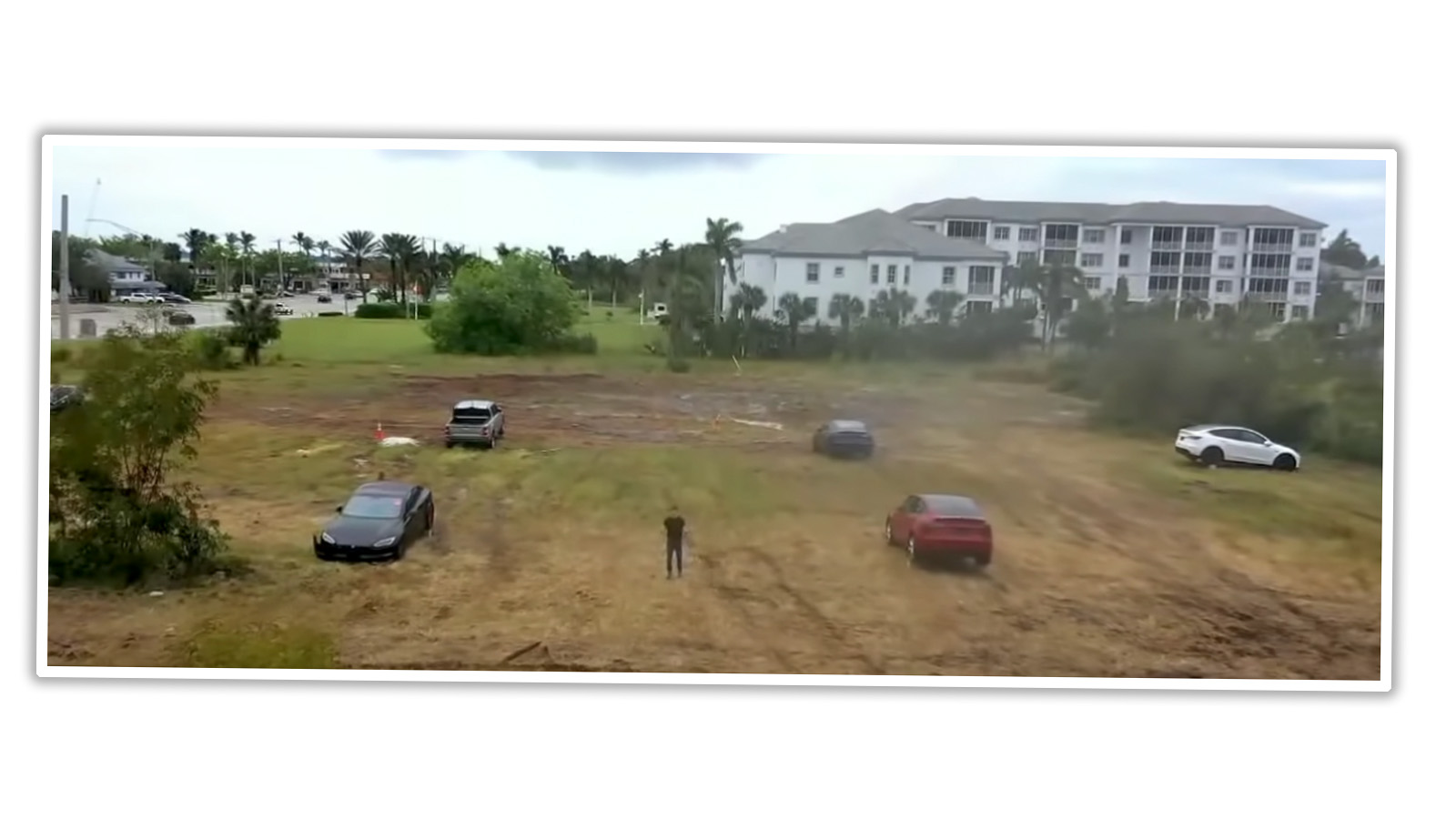 The incredibly low density of this sort-of scrapyard is because any of those flooded cars could reignite without warning, and the distance can help prevent one burning car from igniting others. Here’s an aerial view of a similar lot, full of Teslas:

Here's the difference with gas cars vs. EVs post-hurricane. Here's aerial footage of impacted cars. Gas cars are squeezed together like sardines, AND YET the EVs are spread out. Why? Potential for fires as the battery breaks down from saltwater. FULL LINK: https://t.co/R9xVcqjYt0 pic.twitter.com/vh1C4dTiNb

I know all cars can catch on fire, and I do not think EVs are inherently more dangerous than other cars in general. However, in this specific context — flooding — especially salt water flooding, there really isn’t any comparison with combustion cars. Combustion cars get ruined when flooded, but generally don’t catch on fire as a result of being water-logged.

This is all kind of new territory, and it’s clear that new procedures and precautions need to be developed. TThe NTSB does have guidelines for Emergency Responders for dealing with Li-ion fires, and Florida Chief Financial Officer and State Fire Marshal (shouldn’t they have two people to do these jobs?) Jimmy Patronis issued a letter to over 30 EV carmakers, though it’s addressed directly to Elon Musk, who I guess can just tell everyone else about it:

As you are aware, nearly three weeks ago Hurricane Ian impacted Florida’s Southwest coast, inundating the area with salty storm surge waters. The Category 4 hurricane was so massive, storm surge reached 16 feet in certain areas and went as far inland as downtown Fort Myers. From my experience in traveling the state, there were a tremendous amount of Electronic Vehicles (EVs) in this part of Florida, and we now know for a fact that any EV that was submerged in saltwater is a fire risk.

As the National Highway Transportation Safety Administration (NHTSA) confirmed last week, “Test results specific to saltwater submersion show that salt bridges can form within the battery pack and provide a path for short circuit and self-heating. This can lead to fire ignition.” The federal agency also confirmed that, “Lithium-ion vehicle battery fires have been observed both rapidly igniting and igniting several weeks after battery damage occurred.” Further, I saw with my own eyes as North Collier Fire Rescue fought an EV fire that continuously reignited. It was surreal, and frankly scary, watching fire teams fight this EV fire, using tens-of-thousands of gallons of water to cool the batteries, and then again watching the EV reignite. I even found out later that the car reignited on the tow truck. Florida firefighters have been the tip of the spear in hurricane recovery operations, and more has to be done to help these heroes deal with the unique challenges of EV fires. The fumes from the fires are dangerous, fires reignite, and fire teams don’t have a lot of tools at their disposal in dealing with these lithium-ion vehicle battery fires.

The unfortunate reality is that there is a population of vehicles that could spontaneously combust, putting our first responders at risk, and the manufacturers are nowhere to be found. For as big a risk as this is to fire teams, for companies who have received an immense sum of subsidies from taxpayers, I would have hoped the reaction by manufacturers would have been more robust – especially as these EVs supposedly have a tremendous amount of technology and connectivity. There could be a family who evacuated, whose home was left relatively intact from Ian, who may still lose everything because of an abandoned EV, left in their garage, that catches fire as a result of salty storm surge waters. That’s a risk that requires more of a response from manufacturers than just telling customers to consult the owner’s manual.

Many of these families are trying to rebuild their lives following Ian, and manufacturers should really be doing more for families in their time of need. That’s just good corporate stewardship.

In this context, we need EV manufacturers to step-up, demonstrate leadership and partner with the State of Florida and local officials in this recovery to ensure that:

1. Outreach to EV owners by manufacturers takes place, alerting customers to the risks of EVs and fires from salty storm surge waters.

3. Having an on-the-ground presence and offering assistance to customers and first responders in mitigating these risks.

1. Has your company conducted any analysis on the effects of saltwater intrusion on the lithium ion batteries in your vehicles and their risks associated with fires?

2. Over what period of time does a fire risk exist from a vehicle impacted by saltwater, or does the risk exist indefinitely? While NHTSA confirmed to our office that “fire ignition” can occur “several weeks” after exposure to saltwater, firefighters and other first responders need greater specificity to accurately assess, plan, and act on these risks.

3. Can you provide to the state information on the location of these EVs in the runup to impacts from Ian?

4. Can you provide a point of contact for your company that can be shared with emergency officials?

5. Are there any fire risks associated with chargers that were submerged in storm surge?

6. Do you have the ability to assess whether an EV, impacted by storm surge, is operational and currently being used?

7. To your knowledge, is there any fire suppression technology that has great success in ensuring fires do not reignite?

8. As much of the Central portion of Florida was flooded by heavy rains, is there any associated risks with submersion in freshwater?

9. Will you forego any attempts to limit information, under the premise of proprietary secrets, and agree to make the provided information to above questions publicly available as to facilitate greater coordination amongst industry experts as we work in real time to mitigate risks?

Please provide answers to my office for public distribution no later than October 24th. Again, the recovery in Southwest Florida is still ongoing. There are still families who have not gotten to their homes and families who are sifting through their belongings, making hard decisions. While this information is critical to mitigating further suffering, we really need to see more action by your company on a product that no one knows more about better than your engineers and your experts.

I look forward to your response.

So far there has yet to be a formal response from any carmaker to the letter, which has valid questions.

While we’ve certainly seen EV fires before, Hurricane Ian forced Florida into becoming an unwitting testbed of what happens when large numbers of EVs are salt-water flooded en masse. The results aren’t great.

I'm a co-founder of the Autopian, the site you're on RIGHT NOW! I'm here to talk to you about taillights until you cry and beg me to stop, which I absolutely will not. Sorry. Hug? Also, David's friend.
Read All My Posts »
PrevPreviousCan You Guess The Many Borrowed Parts On The Failed Th!nk City EV?
NextHere’s What Happens When A 1975 Plymouth Valiant Gets T-Boned By A 2011 Chevrolet Traverse (It’s Bad)Next