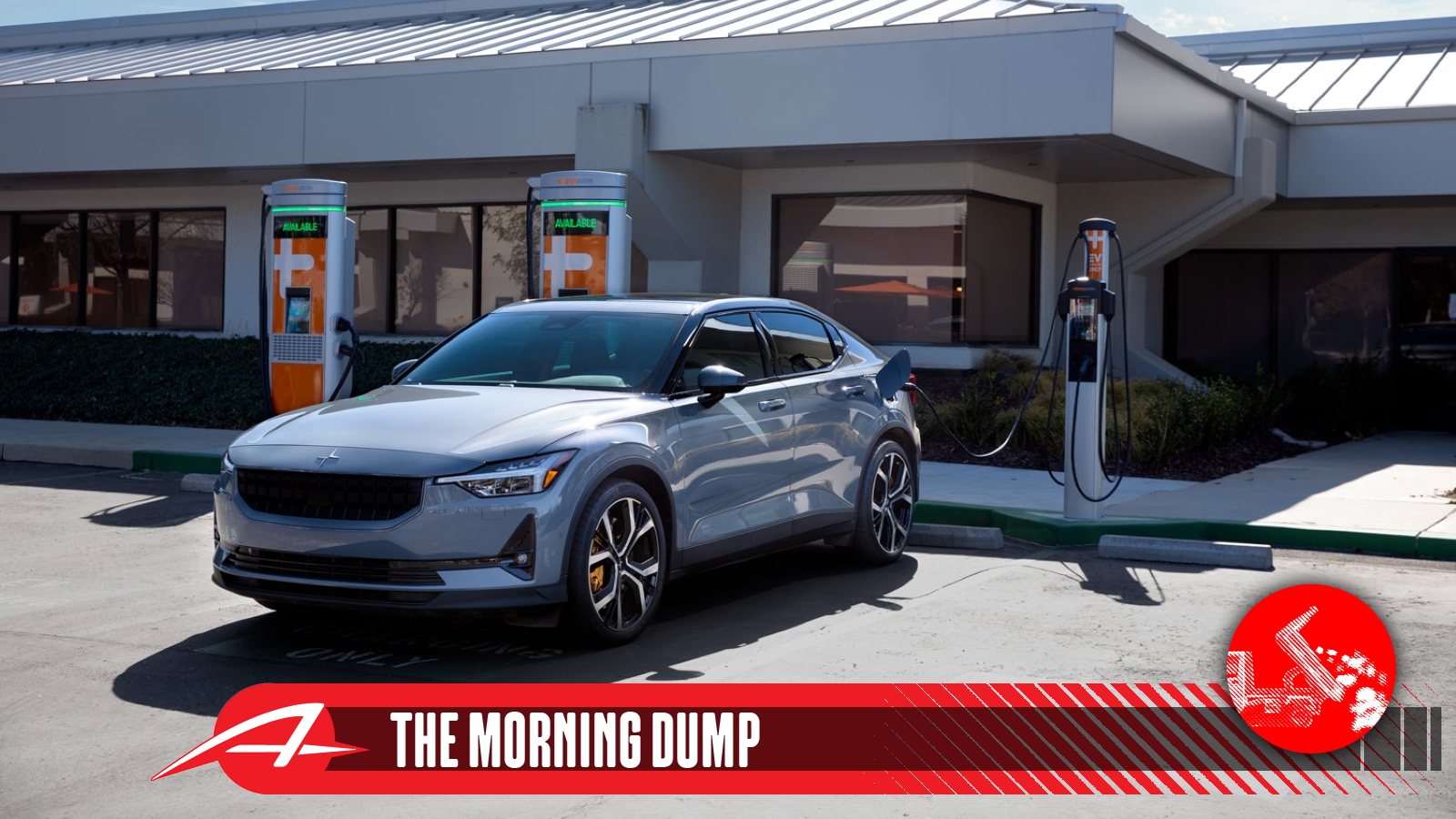 North Carolina state reps want to rip out public charging stations, Genesis may go bespoke, Ram readies a special TRX. All this and more on today’s issue of The Morning Dump.

This Sounds Like A Really Stupid Use Of Taxpayer Money

Forgive me for getting political for a second. While free EV charging likely isn’t sustainable in the long-run, North Carolina state representatives Kidwell, Moss, Brody, and Cleveland have introduced an anti-free charging bill that makes them sound like whiny little pricks.

House Bill 1049 consists of three main components. The first is to make stores with free EV charging stations print on the bottom of every receipt how much of a customer’s bill goes towards subsidizing charging. I mean really, who cares? At current EV take rates, you’re looking at a few cents on each bill, all of which comes out of the operating budget anyway. How is providing free EV charging any different from ad spend? It’s a hook to get consumers into stores.

Secondly, and this is where things get really insane, the bill wants to prohibit use of public funds for free EV charging stations on public land unless fossil fuels are also provided for free. One, electricity’s so much cheaper than fossil fuels that this is insane, two, public funds are drawn directly from constituents in the form of taxes. With the ever-increasing take rate of EVs, shouldn’t your taxes be spent on making your life better?

Third, and this is the most batshit part of all, $50,000 of taxpayer money from the DOT’s general fund will be spent ripping out free EV charging stations on public land effective July 1, and that measure is happening regardless of whether or not the bill becomes codified into law. I don’t know man, that sounds like a gross misappropriation of taxpayer dollars to me.

Look, I may not be a taxpayer in North Carolina, but when I pay my taxes, I really hate to see some of that money going towards stupid shit. This anti-EV bill falls well and truly in the territory of stupid shit. I reckon a lot of people regardless of political affiliation echo that general sentiment. While free charging definitely can’t last in the long run, ripping out charging stations just makes it harder for citizens to drive. Remember, it’s absolutely free to call up a representative’s office and kindly yet firmly let them know what you think about policy.

[Editor’s Note: I AM a taxpayer in NC, and I agree this is some industrial-grade dipshittery. – JT]

Let’s start with the long run. Due in part to ridiculous gas prices, used pickup truck wholesale values have actually declined 2.7 percent year-over-year. Similarly, SUV values are up, but only by 9.9 percent. Conversely, compact car values are through the roof, up 14.7 percent year-over-year and nabbing the title of second fastest-gaining segment. The fastest? Well, people are ordering a whole lot more online, so van values are up by a whopping 27.6 percent year-over-year, an absolutely astronomical figure. As for Midsize cars and luxury cars, they land somewhere in the middle at 12.3 and 13.4 percent respectively. So what about the short term? Well, there’s good news and bad news. The good news is that full-size and luxury car values declined over April’s figures, the bad news is that everything else is up.

As for whether or not we’re truly past the peak of market values, it’s hard to say from figures alone. While an index number of 222.7 is lower than the 236.3 peak we saw in January, it’s still up from last month’s 221.2. While a normal sales year sees values run hotter in the summer, 2022 is shaping up to be anything but a normal year on the used car market. Best advice? Hold tight for now unless you’re absolutely sure you can comfortably afford cars at their current prices and aren’t afraid of potential future depreciation.

According to The Korea Economic Daily, Genesis is set to launch a personalization program called “One of One.” The plan is fairly simple – first allow customers to pay a bit more money for custom interiors, then expand into paints, powertrain selection, and other special options. It’s a move directly out of the playbook of German competition. BMW has its Individual Manufaktur program offering a whole rainbow of colors and leathers, Mercedes-Benz’s Manufaktur program offers special paints, leathers, and trims, while Audi’s Exclusive program also has special paints and interiors.

Not only will extra-cost paint and interiors promise to generate more revenue for Genesis, they also blend well with what we’re already seeing from the brand. In my home market of Canada, orders are pulled from national pools of vehicles, so it’s fairly common to see Genesis models out and about in some really interesting specs. The take rates for actual colors are high, which means that customers should support a detailed personalization program.

Stellantis is a huge fan of special editions, so it shouldn’t be a huge surprise that the special edition treatment has made its way to the ridiculous 702-horsepower Ram TRX. This supercharged half-ton pickup truck has never been a shrinking violet, but this new Sandblast Edition promises to blend in better with desert surroundings. A subtle Ram TRX? Sounds like a bit of an oxymoron.

To create the Sandblast Edition, Ram first swiped a color from the Stellantis back catalog. Mojave Sand was previously available on the previous-generation JK Jeep Wrangler, so it only made sense to pop it on this special edition TRX. After all, why R&D a new color when something perfectly suitable is laying on the shelf? Speaking of stuff laying on the shelf, the TRX Sandblast Edition comes kitted out with the TRX Level 2 Equipment Package, a panoramic roof, a spray-in bedliner, cargo tie-downs, and a bed step from the Mopar accessory catalog. While the black beadlock-capable alloy wheels are new, those in the know will find a pleasing familiarity to the TRX Sandblast Edition’s exterior.

Things heat up a bit on the inside with more unique touches. Ram claims that the carbon fiber trim is unique to this special edition, and it pairs nicely with the carbon fiber steering wheel accents. Light contrast stitching abounds, while Ram has taken the time to ensure that the little animation of a Ram TRX in the digital gauge cluster is shaded in the correct exterior-matching tan. As a bonus, each TRX Sandblast Edition comes with a belt buckle-sized plaque on the center armrest with key specs and the truck’s VIN. Nifty.

Of course, all this off-road speed doesn’t come cheap. The Ram TRX Sandblast Edition clocks in at a whopping $100,090 including a $1,795 freight charge. So, if you have six figures burning a hole in your pocket and want a really fast way to haul bulk mulch across the desert, expect the Ram TRX Sandblast Edition to make an interest-piquing arrival at Ram dealerships this summer.

Whelp, time to drop the lid on today’s edition of The Morning Dump. Happy Wednesday everyone, we made it to the middle of the week. To celebrate, let’s play a game. You can build a three-car garage using unlimited money, but there’s a catch. One has to be powered by gasoline, one must run on diesel, and one must have a battery pack you plug in to recharge. What three-car garage would you end up with?

Thomas is a Nu Rave-blaring, heel-toe downshifting, maple syrup-swilling, chassis-geeking, junkyard parts-hauling, floppy-haired scenester who's been writing about cars since college. His current ride is a 2006 BMW 325i with the six-speed manual gearbox. Instagram: @thomas.hundal Twitter: @thomashundal
Read All My Posts »
PrevPreviousThe 2023 Honda HR-V Looks Like A Reasonably Nice Way To Leave One Place And Arrive Somewhere Else
NextApple’s New Full-Dash CarPlay Brings Up A Really Difficult Interface Design QuestionNext