As I suspect many of you are already aware, yesterday Apple announced a new version of its popular CarPlay feature as part of its new iOS 16 mobile device operating system. This is something our society is interested in, just in case you forgot. This new version of CarPlay has one really dramatic difference: Where all previous versions were restricted to a car’s center stack infotainment display, the new version of CarPlay is free-range. It can expand and fill seemingly any and all digital displays on a car’s dashboard, including the traditional center display, but also instrument cluster displays and any other displays that may be built-in, regardless of size or shape. This means that you can have an Apple-designed user interface (UI) for your gauges, HVAC controls, radio — everything. This also means that other non-traditional dashboard elements, called “widgets” by Apple, can exist in these displays. Is this good or bad? That’s actually a more complicated question than it seems, I think.

First, let’s take a look at just what Apple has introduced for us here:

Next generation of CarPlay

The next generation of CarPlay covers all of a driver’s screens for a cohesive experience. Deep communication with the vehicle’s systems allows for driving information on instrument cluster displays and control of the radio and HVAC. This new version of CarPlay is specific to each vehicle, accommodating unique screen shapes and layouts. New levels of personalization allow drivers to choose their gauge cluster design, including brand‑specific options.18

Fueling and driving task apps are available in CarPlay. Your favorite apps that help you fill your tank and provide you with road information, toll support, towing help, and more can find a home in CarPlay.

Before we get into my asking the Big Question, let’s look at the design of the gauge clusters themselves. These are especially interesting because they’re the clearest reminder that what Apple is making here is not just another center-stack infotainment system, but rather an entire operating system/user experience for your car, replacing whatever the original carmaker came up with.

I actually think these instrument clusters are generally pretty good, no matter how much grousing comes from people online and even right here in The Autopian’s vast, filthy breakroom-furnace room. Here are some examples Apple showed: 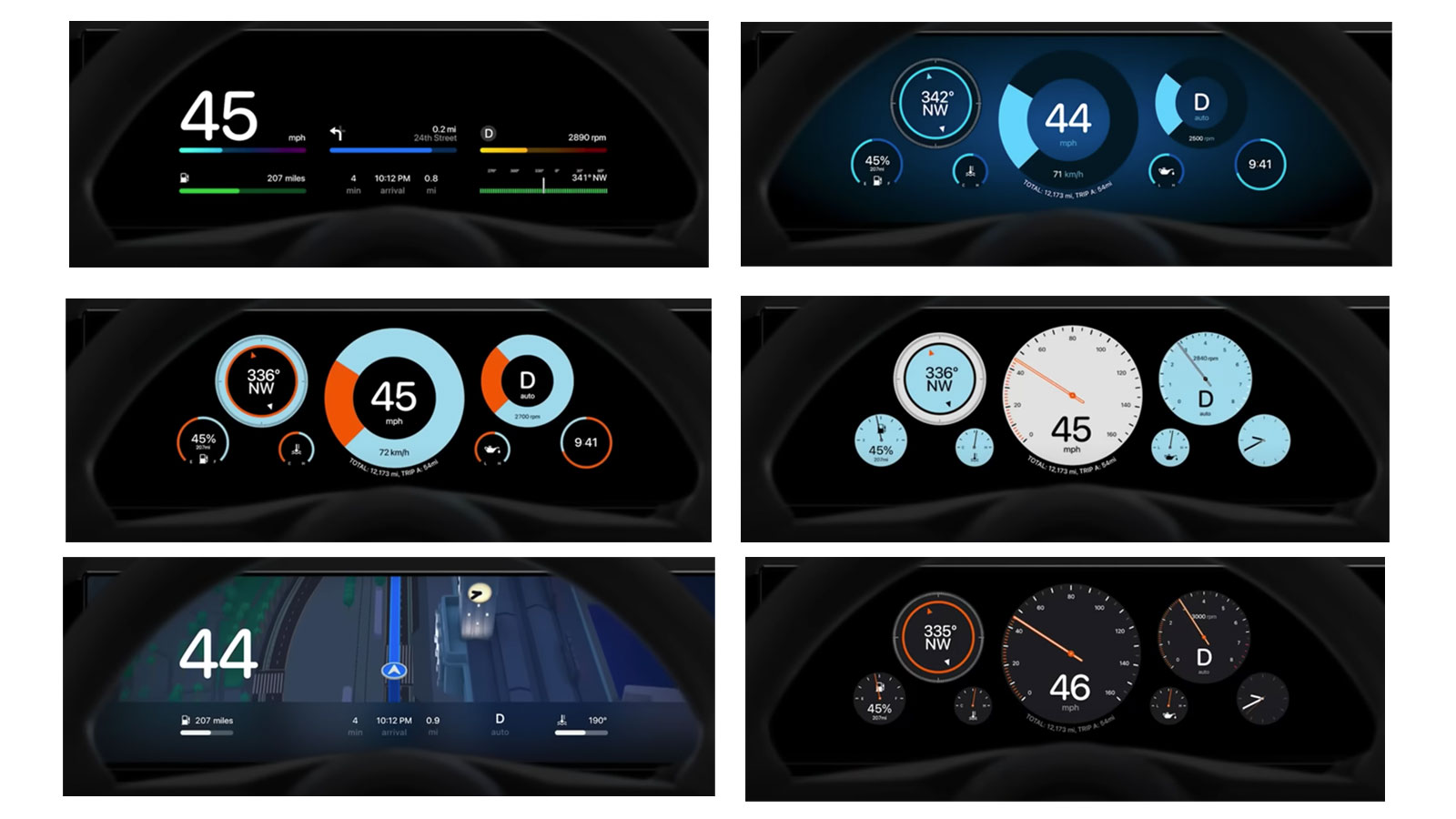 Now, I’m not saying there are no problems here; the circular gauges without hashmark divisions don’t make a whole lot of sense, and the fake-analog-gauge, almost-skeuomorphic ones have foolishly tiny text on them. Also, I really don’t get the prominent inclusion of the compass on many of these, especially since all of these cars certainly have actual GPS, map-based nav. Is there anyone who is really craving knowing how many degrees NW they’re facing?

In fact, the general tone and look of these reminds me a lot of some gauge cluster ideas I made back in 2016:

To be sure, I had some hashmark-less gauges myself, there. And, it’s not like OEMs have been generally doing anything that great with their instrument gauge digital design, anyway: 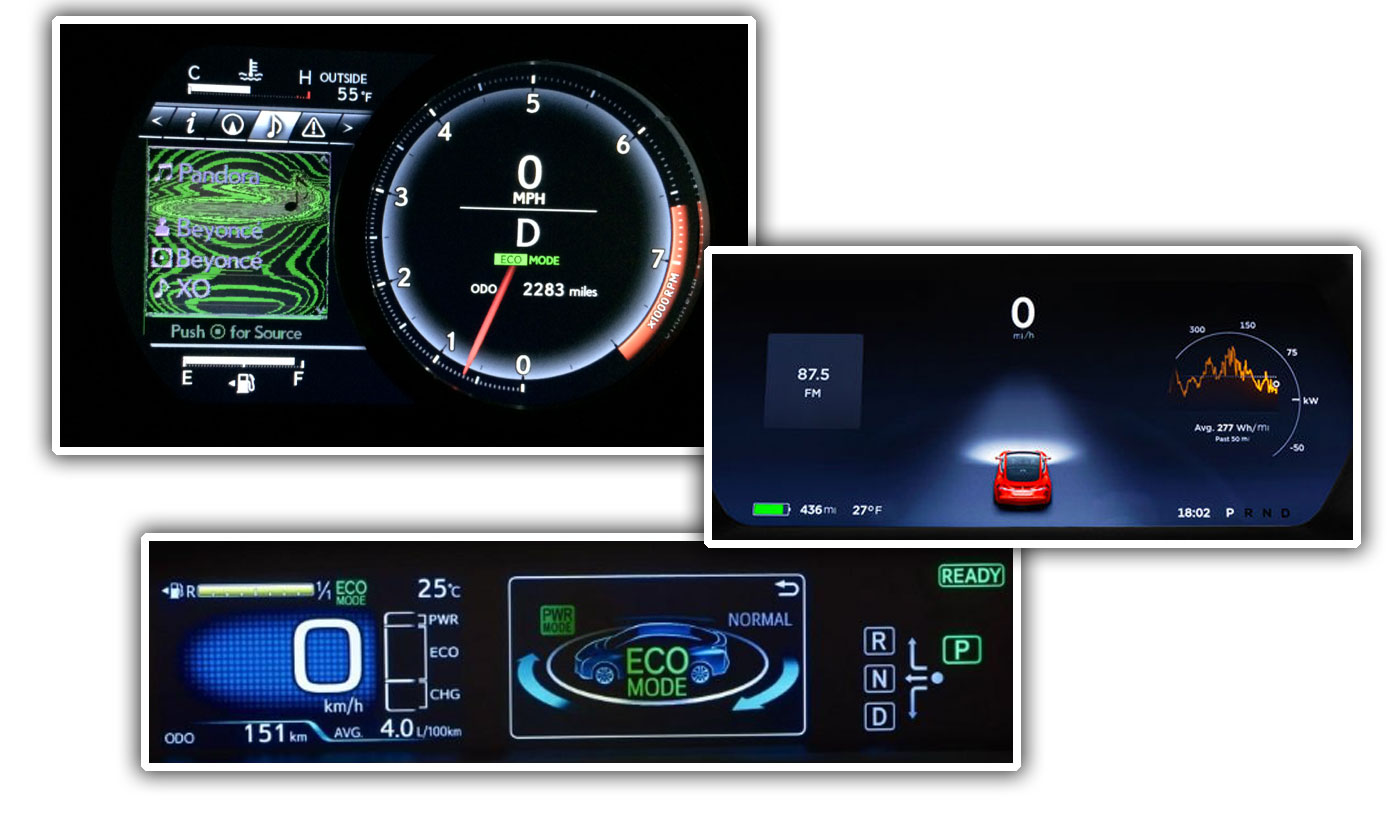 Presented with the terrifying freedom of the blank slate of a full-color LCD display for instruments, most carmakers have either tried to replicate physical gauges, or have seemingly just been baffled about what best to do, creating a mess like that Prius cluster there (bottom one) or making elegant, but largely useless clusters like the Tesla Model S one on the right, which uses a tiny amount of the screen real estate to show you useful stuff (speed, battery range, outdoor temp) and lots more space is used to show a portrait of the car and a techy-looking graph that really doesn’t help you drive any better.

Some carmakers have been doing a good job on their dash displays, like Ford:

But, is even that so different than the CarPlay gauges? Not really. No, the bigger news here has to do with this: 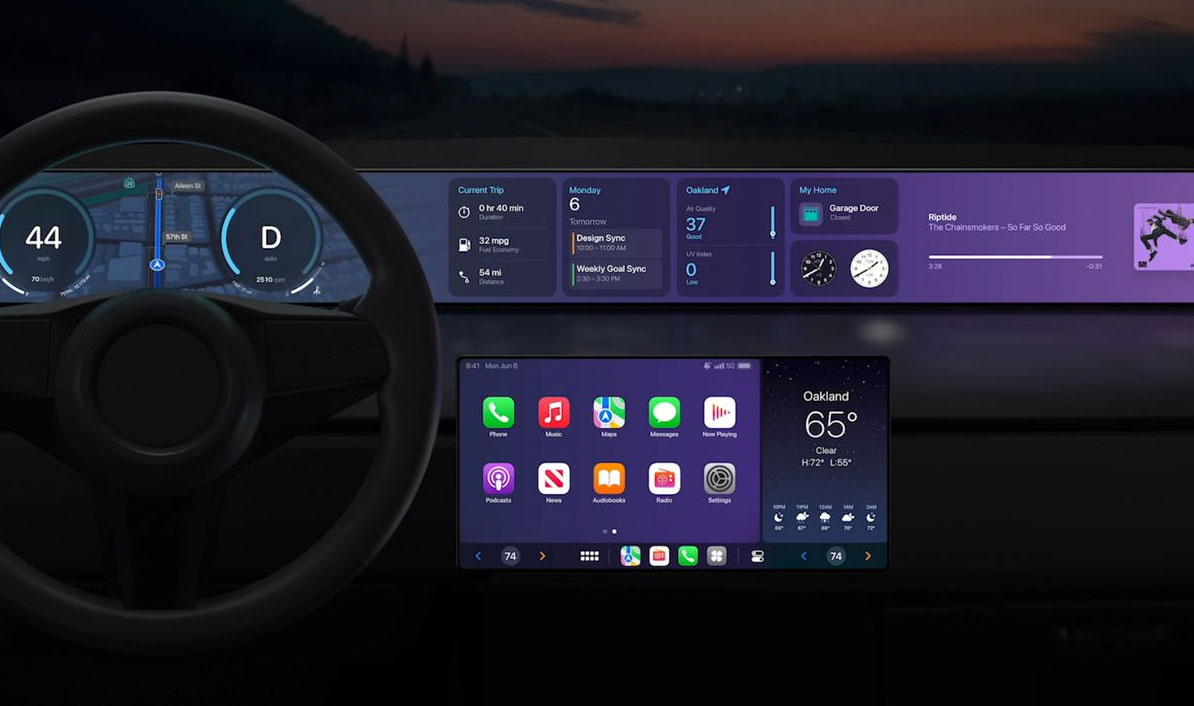 Apple showed how CarPlay can take over pretty much any size and shape display in a car, and many new cars are coming out with long, full-dash display setups , like the Mercedes-Benz EQS, for example. In this case, all of that vast screen real estate can be populated with widgets from iOS, little panels that could potentially display, well, pretty much anything.

This is where the Big Question comes in.

Before I became an automotive journalist, celebrated and/or reviled depending on what sort of taillight bar I’m in, I was a user interface/user experience designer, working on interfaces for desktop and mobile and all sorts of applications. I can tell you that the sort of design shown in these widgets is pretty much the same as you’d find for most mobile devices, usually the sort that don’t have a motor or wheels and weigh about 3,998 pounds less than a car. [Editor’s Note: Glad you stated your qualifications for that truly shocking insight. -DT]

These widgets are designed to be legible and able to capture your attention when needed. None of the widgets shown here are actually necessary to drive a car, and, in many cases, have the potential to take away the driver’s attention enough to become something of a hazard. 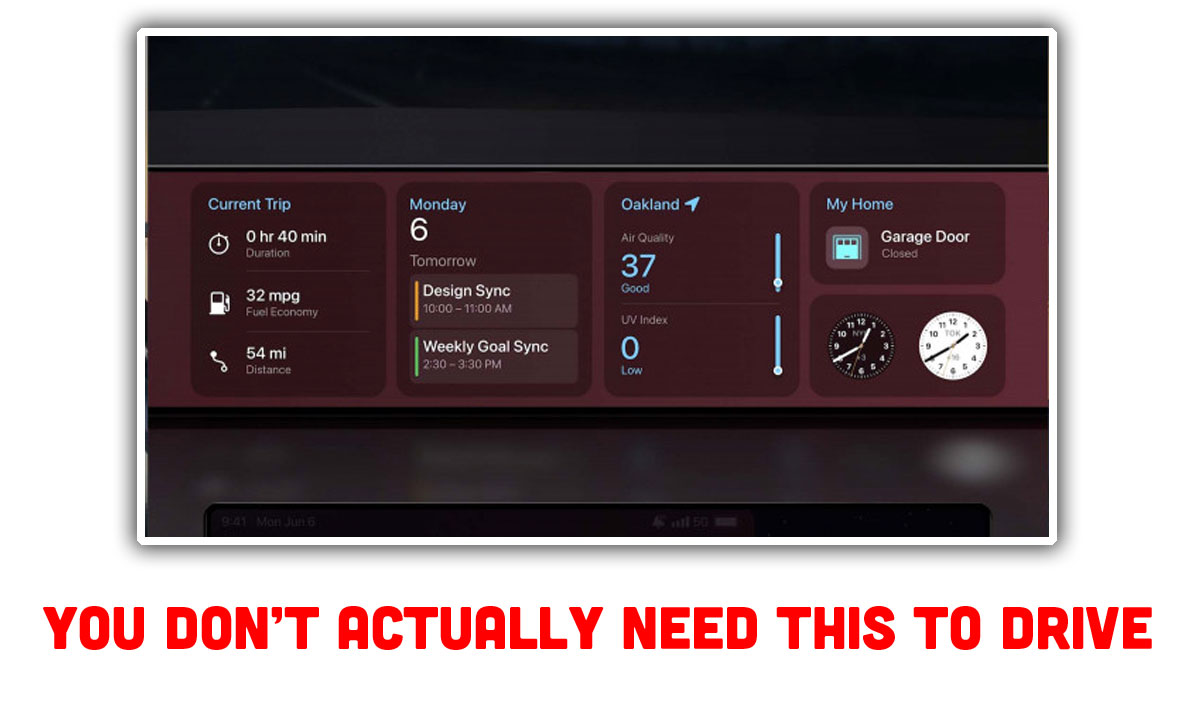 A lot of these widgets may be for things we’d expect to deal with in a car, anyway: music or podcast apps, perhaps HVAC controls (though, in the shot Apple provided the temperature controls are restricted to the edges of the bottom bar of the center screen) but several of the ones seen in this example shot are decidedly non-important to driving, and would require real focus to read/pay attention to, like the calendar widget there or the air quality widget or those two analog clocks or the weather in the center display.

Based on what Apple demonstrated, it would be technically trivial to add a texting widget or a video-chat widget or Facebook widget or, hypothetically, any app could be in there, a web browser or a dating app or Wordle or whatever.

Even if there are restrictions and safeguards to prevent non-driving apps from showing up in the instrument cluster area (those clocks and compasses shown are iffy), there are still plenty of dash real estate that can be used for these possible widgets, as Apple showed.

The thing is, all of these non-driving-focused apps or features could be – and absolutely are, on a daily basis – accessed on a driver’s phone. Drivers routinely read texts or check websites or try to hook up with people or choose podcasts or whatever on their phones as they drive, and the act of that requires much more attention taken from that big window in the front of the car and the task of driving than glancing at a dash display does.

So, The Big Question here is this: Is it actually worse to have non-driving-task-related displays on the dashboard, formatted and designed for dash display, than it is to have people actually looking down at their phones while driving?

I know the ideal is that you shouldn’t be looking at your damn phone at all while you’re driving, but we all know people do it. So should our cars vainly try to cling to an ideal circumstance that doesn’t actually exist, or should a car’s UX accept the failings of human nature and do what it can to try to mitigate the consequences?

I’m not a fan of putting non-driving-related displays on the instrument cluster, or, really, driver-facing dash at all. The passenger can have a separate one with whatever they’d like, why not? But, at the same time, I think I’d rather have a driver be able to glance at a display of an incoming text on the dashboard, which is placed at an optimal location for the line of sight and allows the hands to stay on the wheel, than for that same driver to hear their phone buzz and fish it out of their pocket to look.

So, I admit, I’m a little conflicted. As much as I’d like to be a hard-ass and say this is all terrible, and these sorts of frivolous widgets have no place on a dashboard, I’m also a human being, with faults and flaws ingrained and mixed in me like peanuts and marshmallows in Rocky Road ice cream, so I know that we make bad decisions every day, all the time.

As you probably expected, this idea got me a lot of blowback already, even before we published this. David fundamentally doesn’t seem to get my point, and Thomas thinks that adding any extra distractions is a bad idea.

I don’t think either of them are wrong.

However, I also wonder if maybe accepting people’s bad habits and taking some control of them could make sense. What if you could add almost any dash-app widget you want, but doing so locks out the app on your phone, and the widget could at least be designed to limit the amount of attention/interaction demanded? Is that a reasonable solution that takes into account the worst of our natures?

This way, people who may be willing to do stupid things by interacting with a particular app could at least be mollified by getting whatever essential bit of interaction they need, but framed and designed in a way that is the most minimally invasive or distracting.

Or, maybe that would just open up the possibility of incredibly distracting dashboard displays? But, maybe that’s still better if it gets people off their phones, which takes even more focus away from driving than glancing at the dashboard would?

I genuinely don’t know if what I’m suggesting is right, but I think it’s a question worth asking, especially now since this new CarPlay has essentially made all of these possibilities far more accessible, even if we’re not seeing all the possibilities demoed right out of the gate. The other, safer option would be to just lock out all phone use while driving, but I feel like that would be a non-starter for many, many people. What I’m wondering is if perhaps there’s a way to meet people and their bad habits half-way, which may be better than pretending people won’t do stupid things behind the wheel.

None of these solutions are perfect, but, then again, neither are we, which is why we’re here. I’m really curious to hear what you think about this!

I'm a co-founder of the Autopian, the site you're on RIGHT NOW! I'm here to talk to you about taillights until you cry and beg me to stop, which I absolutely will not. Sorry. Hug? Also, David's friend.
Read All My Posts »
PrevPreviousFour North Carolina State Representatives Declare War On Free Public Charging Stations
NextThe 12V Battery In My Prius Somehow Caused A No Oil Pressure Warning Which Is RidiculousNext