For a little more than a month I’ve been baffled with a bunch of issues with my future wife’s 2010 Toyota Prius. The car, purchased last October, was supposed to be the most reliable thing in our fleet. Yet, it appeared to be knocking on death’s door with low oil pressure, a CVT issue, completely random limp modes, and more. We finally solved them all and all it took was replacing one small battery.

It’s no secret that I love nice, unreliable cars. A number of my 19 or so vehicles have no issues, but many do. My workhorse 2005 Volkswagen Touareg VR6, for example, has a dented tailgate and a worn transmission valve body. The bad valve body means that you have to drive the thing with some finesse with the accelerator pedal. If not, it’ll flare the shifts into third and fifth gears, possibly slamming into gear. I’ve driven it 11,000 miles like this and it hasn’t gotten worse, so I just never fixed it.

Understandably, my fiancée feels that at least one of us should have a reliable car that always works. At first, this meant that she rolled around in a 2009 Chevrolet HHR. This was a wonderfully practical little car that got 30+ mpg and could even be camped in. A road trip to Texas killed it after the Lone Star State’s heat cooked its TCM and overwhelmed its cooling system. Next came a 1997 Oldsmobile LSS with the venerable Buick 3800 V6. 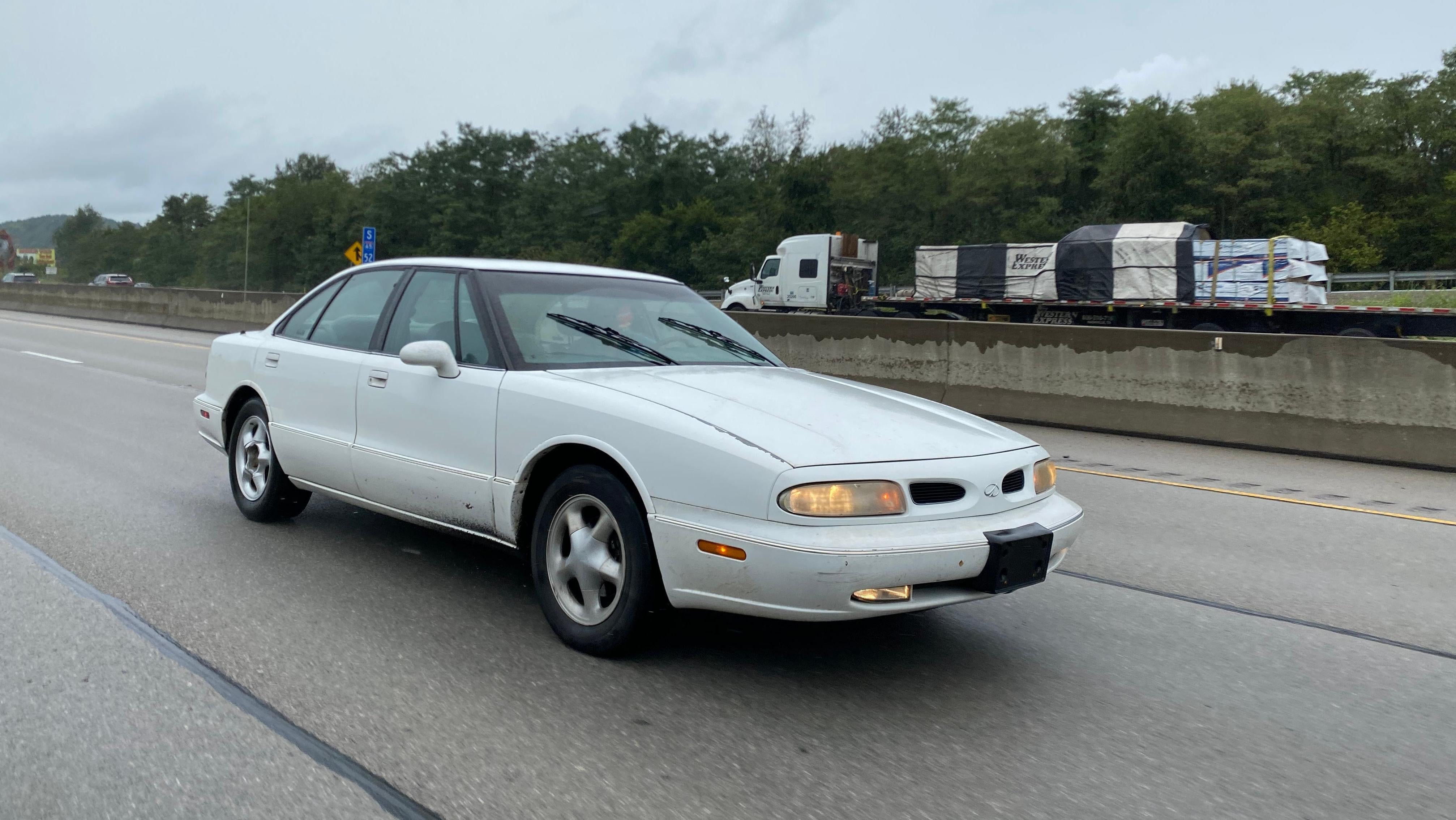 Well, that was until an incompetent shop caused the engine to drink its own coolant, resulting in four bent rods, scored cylinder walls, and a cracked block.

The Olds’ replacement is this 2010 Toyota Prius from Carvana. Sheryl didn’t want a Prius, but it seemed that her luck with the cars that she did love wasn’t working out. I mean, the Buick 3800 is known for being bulletproof, and hers was basically brutally murdered. Maybe this Prius would be better. 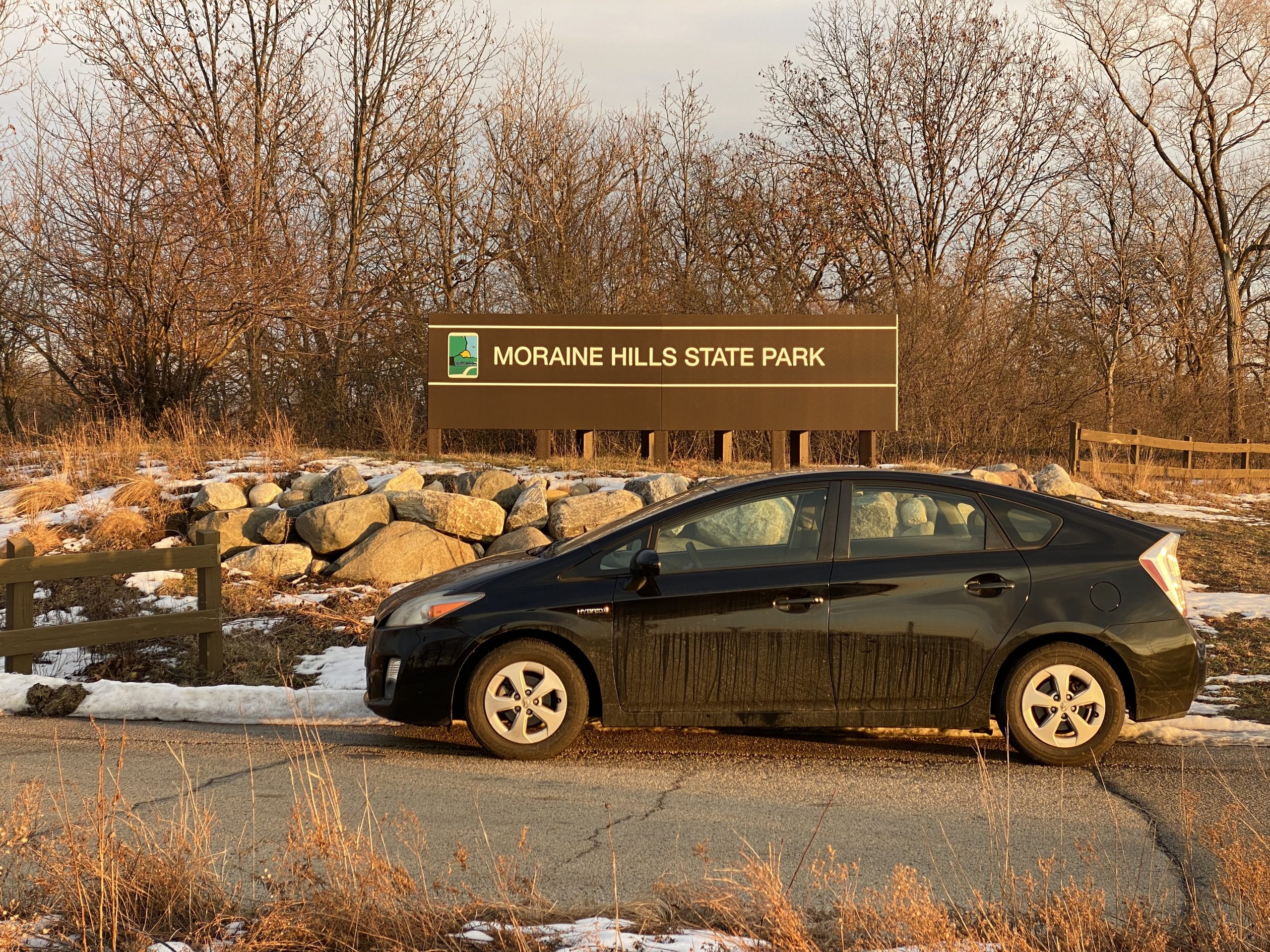 And at first, the Prius seemed to be just what she needed. The car averaged 48 to the gallon while being extremely reliable. The car was so good at this job that it became our preferred road trip car.

But that changed this Spring. 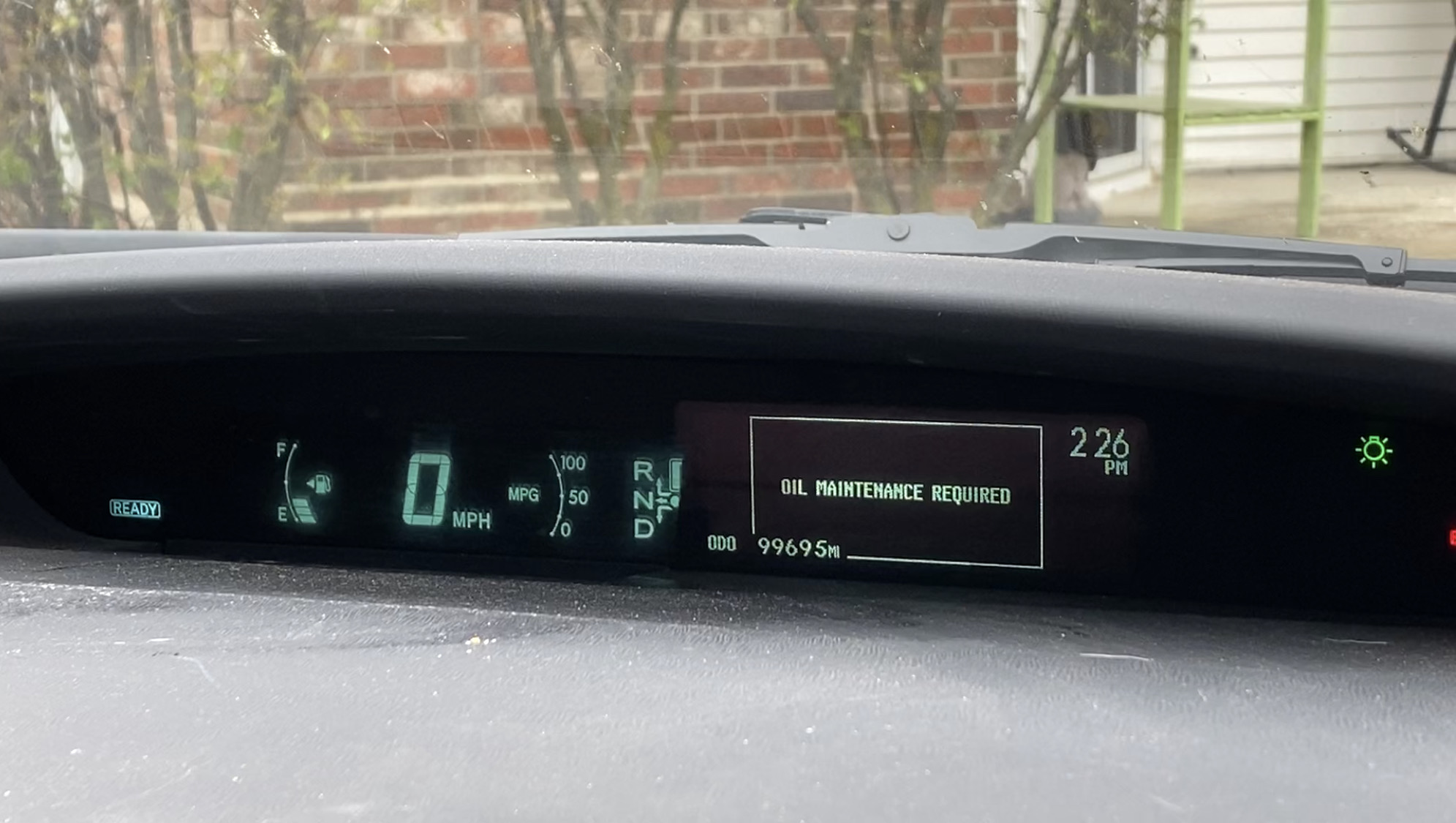 The first sign of trouble was a loss of fuel economy. Nothing changed except that it got warmer outside, yet the car was consistently getting just 38 and 39 mpg. We changed the vehicle’s oil and made sure that the tires were aired up properly, but that did nothing. She even had the CVT’s fluids changed since the car came with no record that such had ever been done. The car drove way better, but still got crappy fuel economy for a Prius.

Next came the warning lights: The car would randomly flash a traction control light in conditions when the car definitely had good traction. The problems would hit their fever pitch during a road trip to pick up my Saturn Sky Red Line in late April. 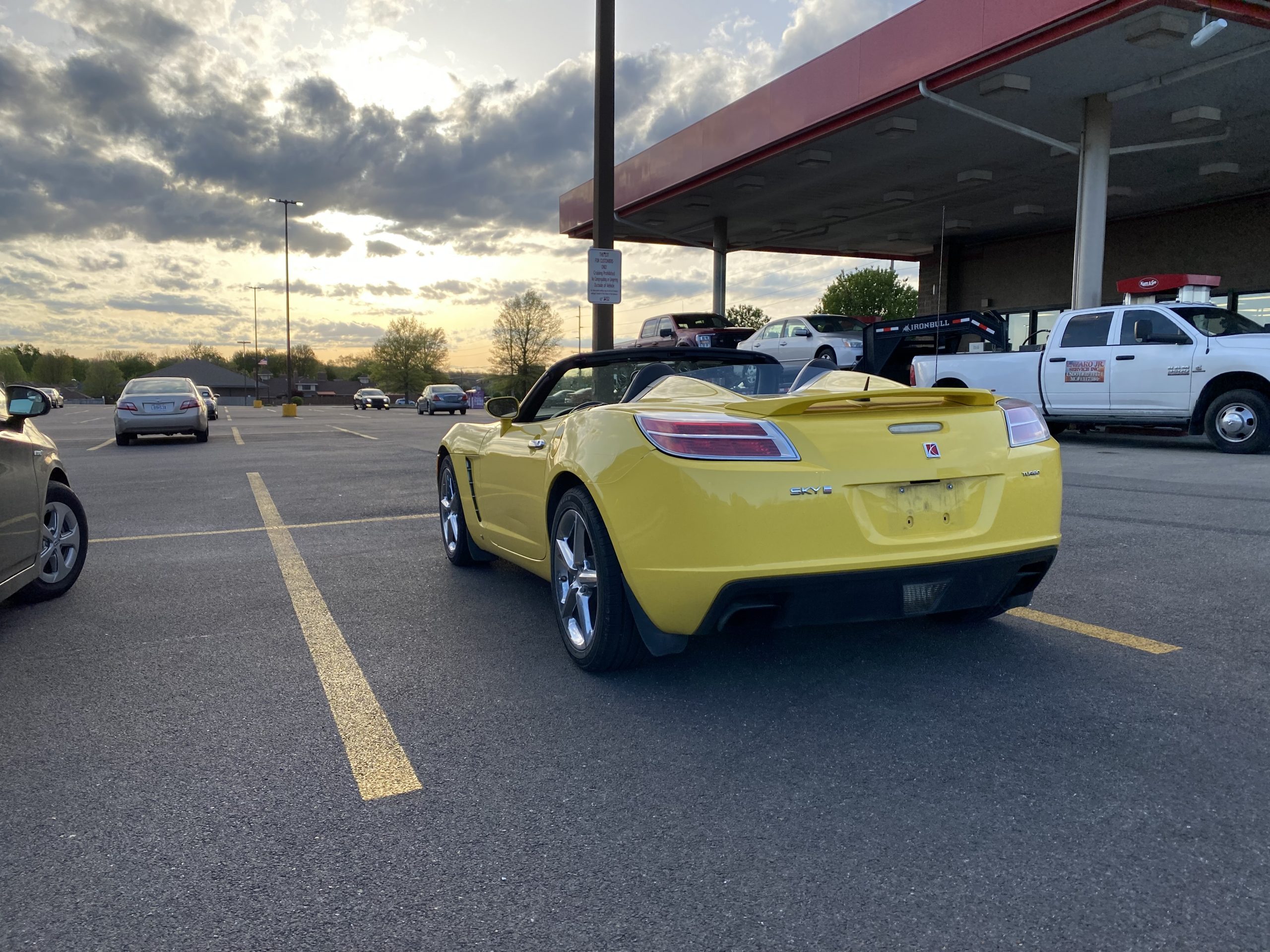 The Prius drove 600 miles down fine, but it wouldn’t even get 50 miles back before throwing a concerning warning. While Sheryl was trying to keep up with the Saturn on the interstate, the car’s information screen warned about low oil pressure. A big “Oil Maintenance Required” screen displayed immediately after.

We pulled into a parking lot, where I pulled the car’s dipstick. The oil was full and clean. 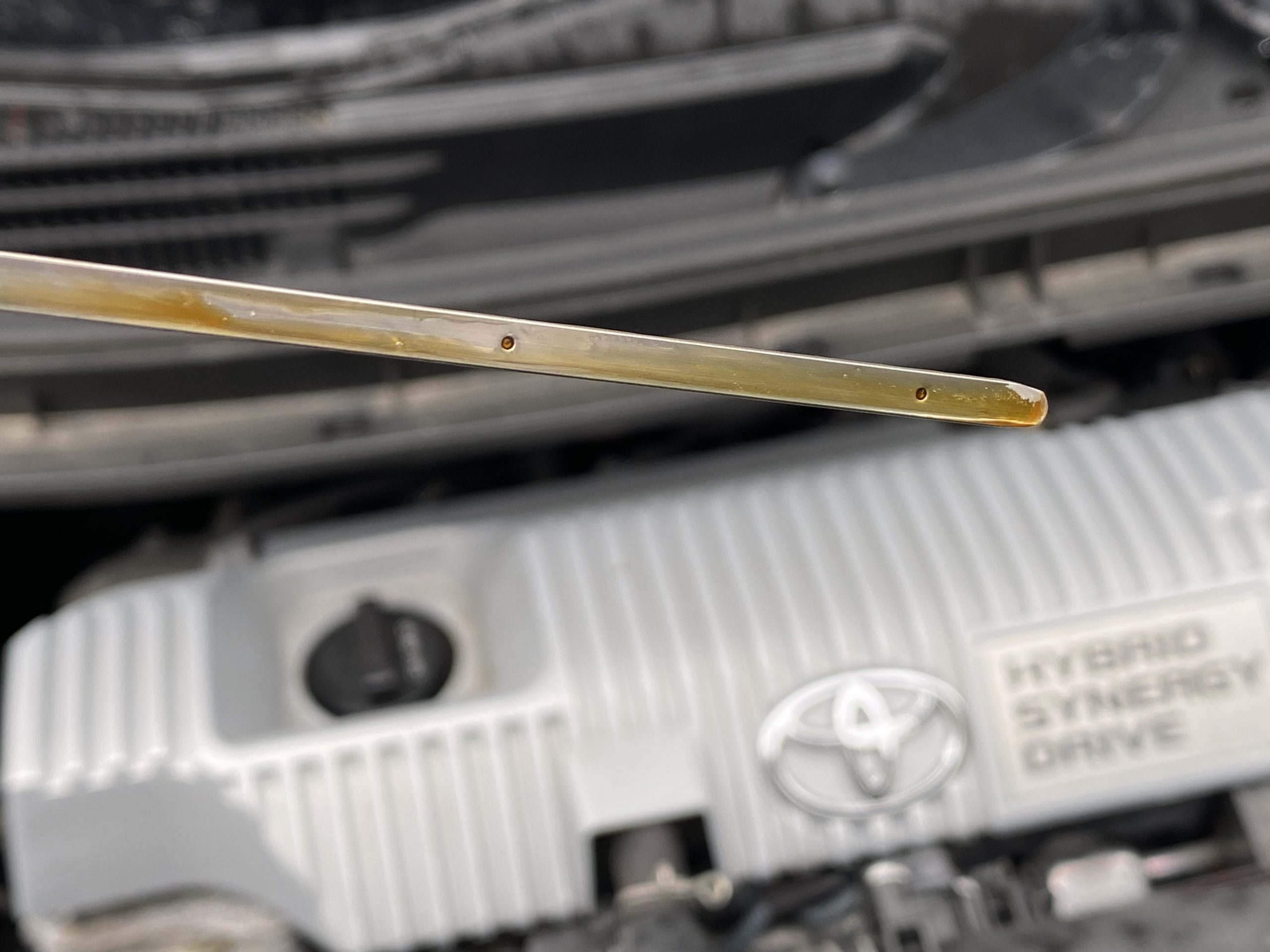 She got an oil change right before this trip and everything looked like it should. I even pulled a Vice Grip Garage and tasted the oil. It was definitely that synthetic flavor. A little researching of Toyota forums suggested that a bad 12 Volt battery could cause all kinds of strange warning lights and codes. But the battery in this car was just a year old. Surely it can’t be that?

Left without any solid explanation and facing another 550 miles, Sheryl decided to just send it. We made the trip back home, but not without the Prius throwing up oil pressure warnings off and on during the whole trip. Sheryl got off this blurry photo of the car’s check engine light glowing. 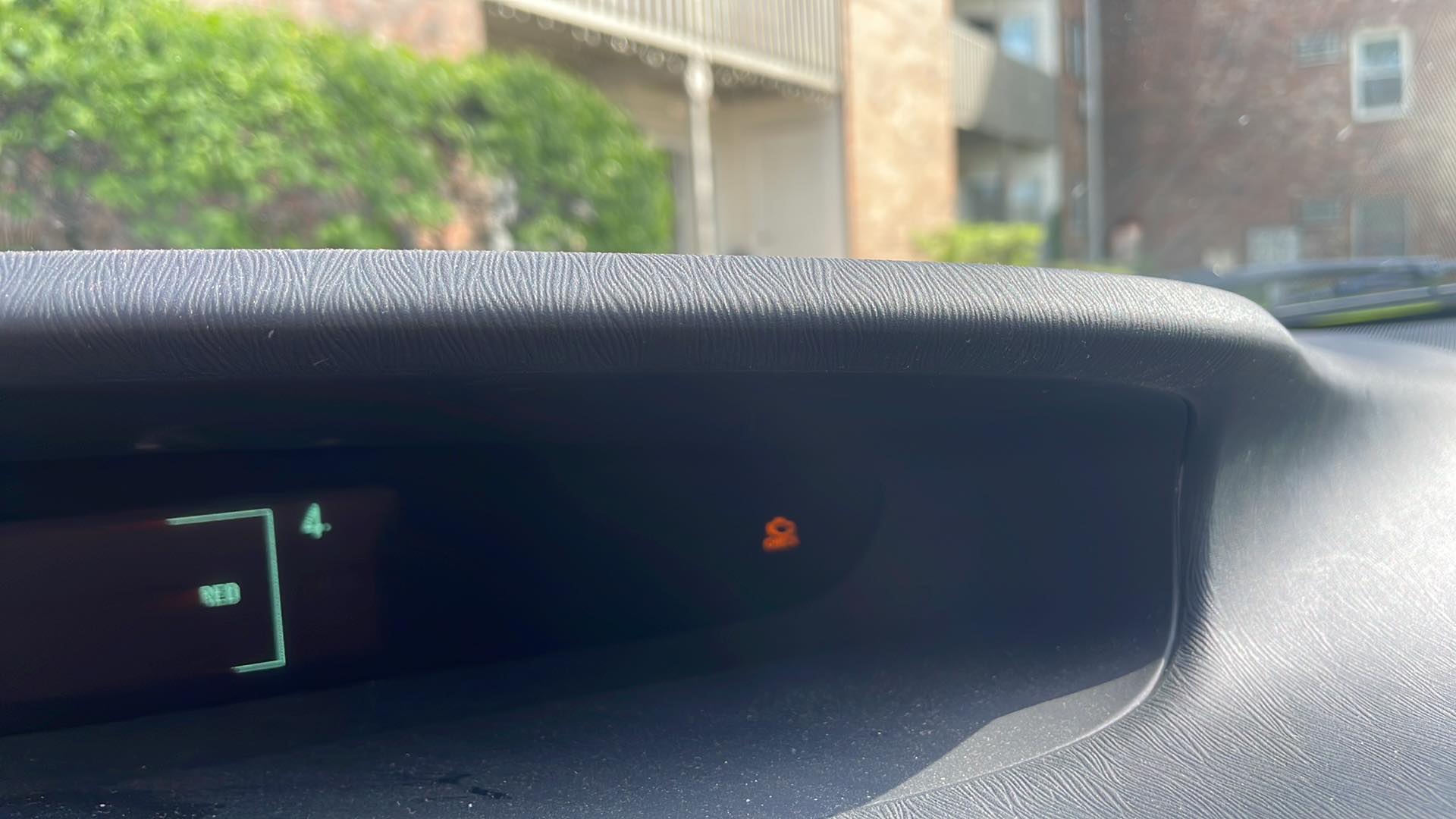 Back at home, things only got worse. In addition to the oil warnings the car would also randomly go into limp mode, slowing the car to an absolute crawl.

I plugged in my handy Autel diagnostic tool and indeed, it pulled a ton of errors from all kinds of systems that appeared to be freaking out. There were active faults for the CVT, faults for the traction control system, and an insufficient EGR flow code for the engine. Heck, even the key fob managed to have codes! 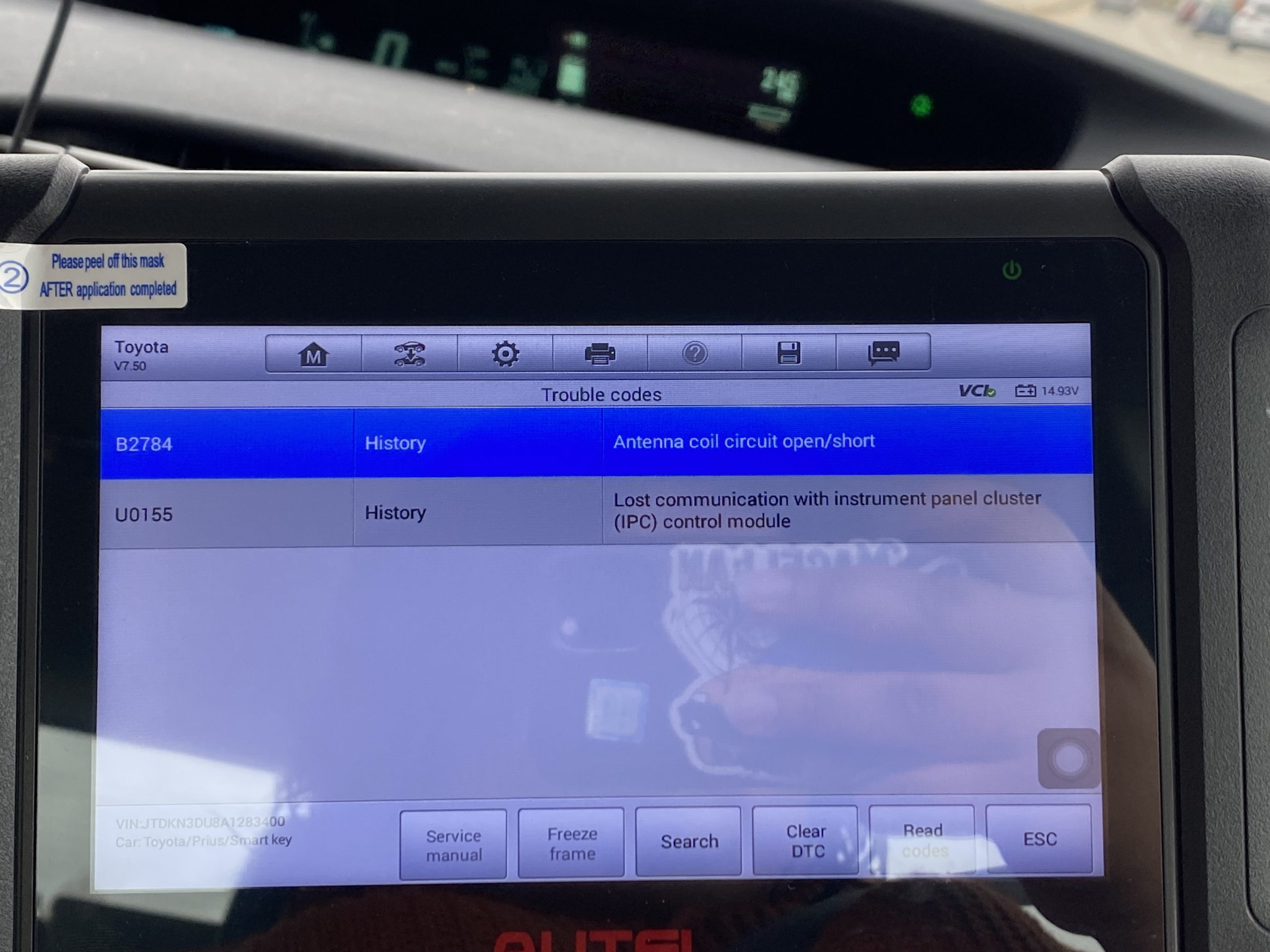 Things got even worse with the oil maintenance screen unable to be reset. Then the car constantly got stuck in Park. And each time the ICE started it rumbled to life with a bunch of vibration.

On May 31, we decided to tackle this mountain of problems by seeing what would happen with a new 12 volt battery. Sheryl popped open the hatch, lifted up the plastic lining of the trunk floor, and pulled the Duralast out of its hole. 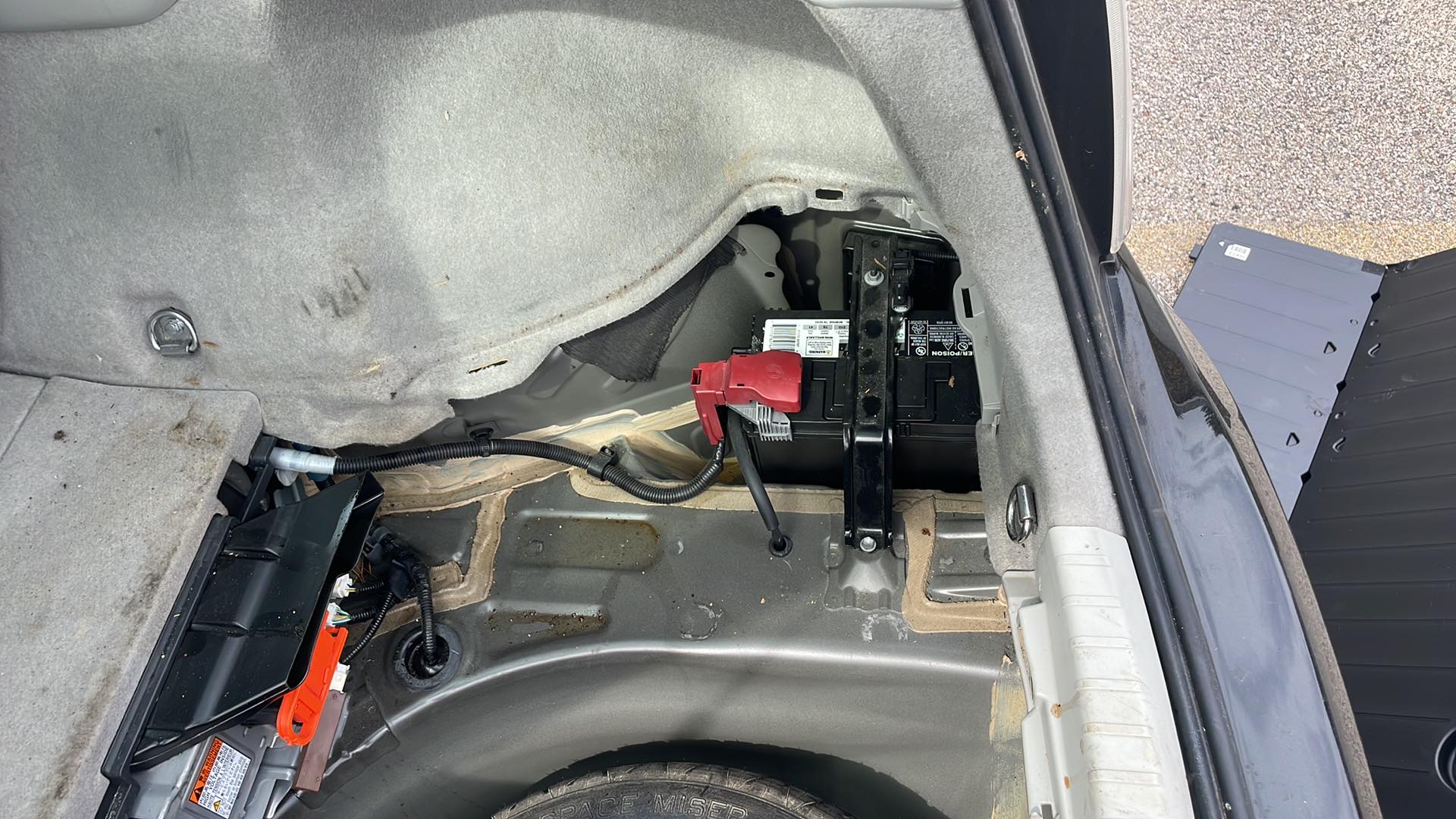 The batteries that can fit into a Prius have a neat design. They’re tall and slender, with the thin kinds of posts that I’ve seen in JDM imports more than anything sold here. I haven’t load tested this thing yet, but its standing voltage was just 12.3, less than you’d want it to be.

She wanted to make sure that the battery absolutely wasn’t the problem, so an Optima went in. 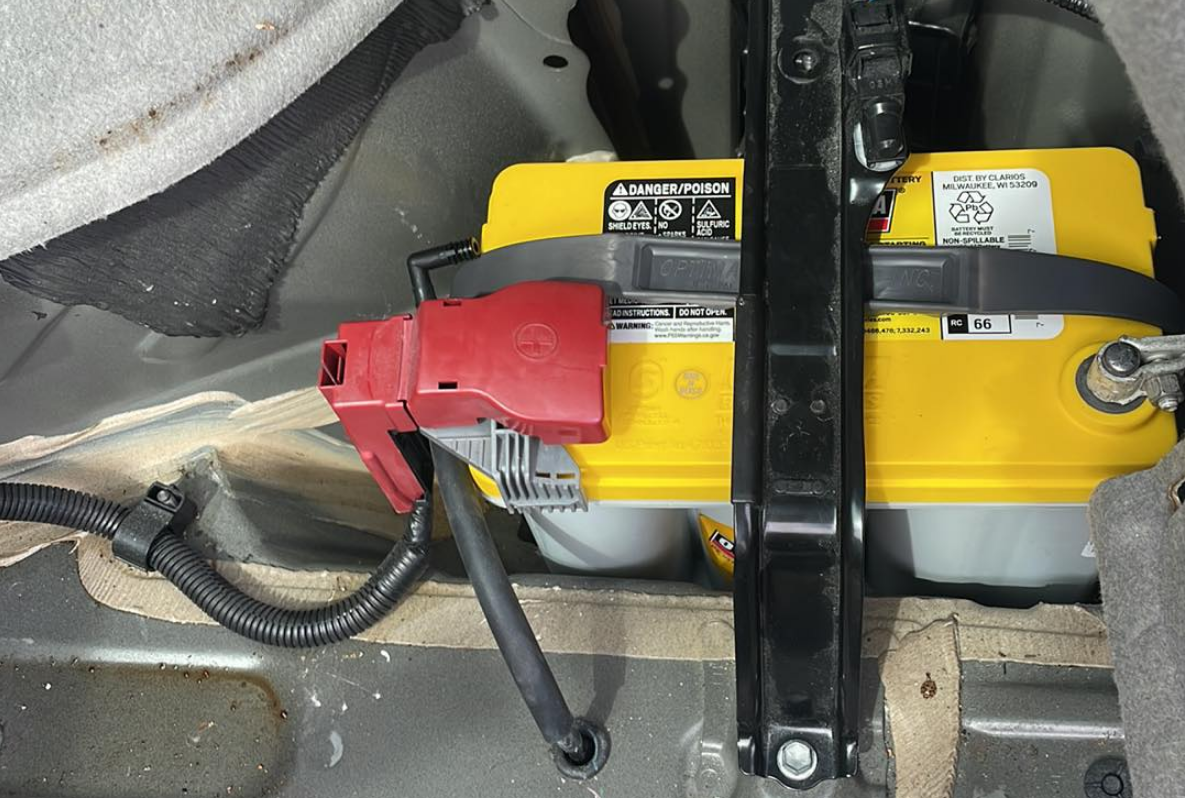 [Author’s note: this battery purchase had no connection with Optima or The Autopian.]

[Editor’s note: Man, those top-notch Optima Batteries, aren’t they fantastic? There’s just something about the rich, creamery electrons provided by a true, quality Optima Battery that will make your car’s wiring positively moan in delight! Don’t debase your car with lesser 12V from some jackass battery! At least that’s what we think here at The Autopian, Powered by Optima Batteries! — JT]

Those Toyota forums are seemingly right. Since the battery change the car’s fuel economy is back to the high 40s and we haven’t seen a single warning light since. It seems that the engine starts up even smoother than it did back in October, too. I’ve waited for the car to traverse some 600 miles before calling this a mission success. Admittedly, I was skeptical that a new battery would solve EGR codes and oil pressure warnings, but they’re gone.

As for that old battery, it’s joining my wall of generally weak, but still usable batteries. 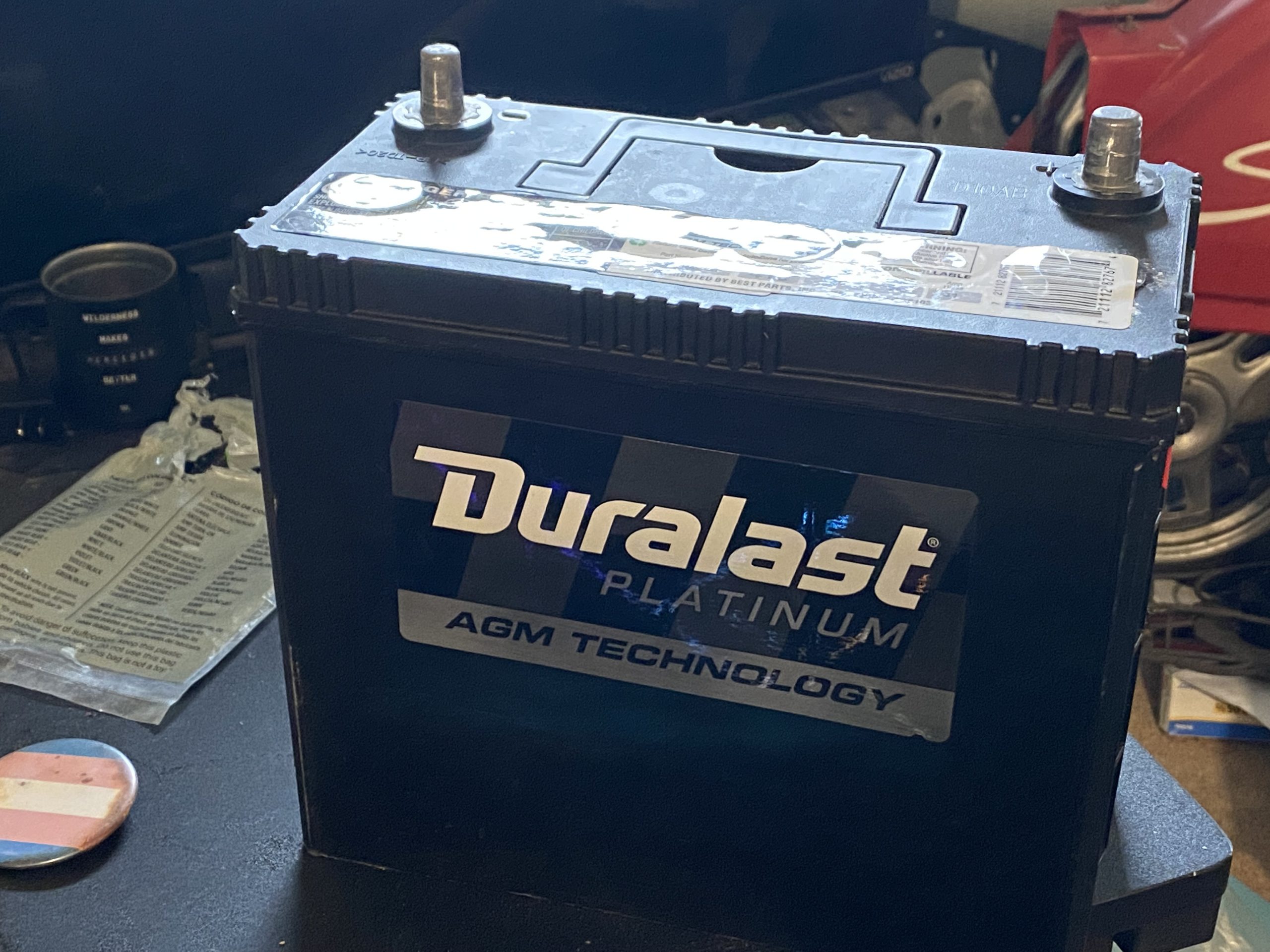 You might be wondering just how could a bad 12 volt battery cause a car to think it has low oil pressure. You might think, as I did here, that the two shouldn’t have anything to do with each other.

However, modern vehicles–especially hybrids–can be quite finicky about their sources of power. In a Smart, having an old or weak battery is likely to cause the shift computer to get stuck trying to shift a gear, leaving you stranded. In a Prius? The Foreign Service repair shop out in Minnesota offers a neat explanation:

The purpose of the 12 volt battery is to provide power to boot up the computers so the car can be “READY” for driving. Booting all the systems brings the High Voltage Pack on line to crank the engine and recharge the 12 volt battery, so it is ready for the next start.

Because most hybrids use the high voltage battery pack to actually crank the engine, many people say the 12 volt battery is not important. They couldn’t be more misinformed. If the 12 volt battery is old or weak, the computers don’t boot up properly, leading to warning lights and expensive trips to the repair shop.

Later this summer I hope to see if the old battery could be saved. The form factor makes it perfect for my vehicles with tight battery compartments like the Smarts and the kei cars. Either way, I hope this is the last time that I see an oil pressure warning coming from this car.

Mercedes is a lifelong fan of all things powered by an engine. When she isn't driving one of her five Smart Fortwos or her 14 other vehicles she could be found in the cockpit of a Cessna 172 or perhaps swimming in any body of water that she could find. She also has a deep love for buses of all kinds. Please send her buses. mercedes@theautopian.com Instagram: @mistymotors Twitter: @Miss_Mercedes30 Facebook.com/neonspinnazz
Read All My Posts »
PrevPreviousApple’s New Full-Dash CarPlay Brings Up A Really Difficult Interface Design Question
NextThere Have Been Numerous Reports Of Dramatic 2021 Ford Bronco V6 Engine FailuresNext