The Ford Bronco is pretty cool, a modern off-roader that really splits the difference between the cushy Land Rover Defender and lane-wandering Jeep Wrangler. However, some Broncos appear to have a fairly big problem. Dozens of owners are reporting spontaneous engine failure, often before the 5,000 mile mark. Let’s take a look at what’s going on.

First, some exposition. The engine in the Bronco isn’t actually anything new. Ford’s revised second-generation 2.7-liter Ecoboost turbocharged V6 first saw use in the F-150 pickup truck way back in 2018, so this isn’t some case of a brand new engine not having the kinks ironed out. Of equal importance, the second-generation 2.7-liter Ecoboost engine has developed a reputation for being fairly reliable. For example, manufacturer communications for 2018 F-150s with the 2.7-liter engine consists of two technical service bulletins for faults, one for a stall while towing that recommends powertrain control module reprogramming and another for an oxygen sensor-related fault. Minor annoyances, but nothing catastrophic. That’s all changed with the Bronco.

Taking a cursory glance at owners’ boards, it’s not hard to find tales of V6-equipped Broncos experiencing catastrophic engine failure. At the time of writing, 50 failures have been compiled by Bronco6G forum member Lucchese, with mileage ranging between 6,986 miles on the clock and just 984. A list of 48 owners one one forum with failed engines is pretty bad, but it gets worse — some of these owners have suffered multiple engine failures. Imagine how demoralizing repeat engine failure must feel, especially when you’ve spent tens of thousands of dollars on a brand new vehicle that should theoretically be fairly reliable.

R. Carson Mataxis understands the disappointment in Bronco engine failure. Eight days after picking up his brand new Bronco, its 2.7-liter turbocharged V6 died not with a bang, but with a whimper. “There were no loud sounds or shakes or anything. It was just a loss of power at the pedal. You’re pushing down a little harder and hoping for a response, but knowing something big was wrong,” said Mataxis. “I was in the left lane on cruise control, maybe going 65 or 70 (mph). I was able to navigate to the far right shoulder with about six inches between me and a guard rail, and maybe another 12 inches between me and traffic. The Bronco would shake every time an 18-wheeler passed.”

Breakdowns are never fun, but they can be properly harrowing depending on the circumstances. In Mataxis’ case, circumstances were almost as bad as they could get – more than 200 miles away from home in below-freezing weather with beloved pets on board. “The vehicle lost all power about 20 or 30 minutes into it, so it steadily got colder inside the vehicle,” said Mataxis. “I remember my toes were getting really cold. It was an inconvenience, that’s for sure, but it would’ve been so much worse if my two-year-old daughter was in the car.”

Ford would only tow Mataxis’ Bronco 35 miles or to the nearest Ford dealership. Not great when a breakdown happens on a Sunday when dealerships are closed. Mataxis ended up calling USAA for a tow, paying $713 out of pocket that he says Ford hasn’t made an attempt to make right. After just eight days of ownership, Mataxis’ Bronco suffered catastrophic engine failure requiring 32 days of downtime to correct. That’s just not acceptable performance from a new vehicle.

So what could be causing the Bronco’s V6 engine issues. Well, a January bulletin for Ford’s Lima engine plant has a tiny little note that says, “Nano valve supplier issue was resolved with more robust design and material changes at the supplier.” Nano is Ford’s codename for the 2.7-liter V6, so there’s a strong possibility that a valvetrain issue is at play here. Indeed, the National Highway Traffic Safety Administration suspects just that. This NHTSA investigation document claims valvetrain failure as the cause, likely due to diagnoses on complainant-owned vehicles. FordAuthority claims that in addition to faulty valves, Broncos equipped with the 2.7-liter V6 suffer from a bad oil pan design that may let the oil pickup tube suck in air. Oil is kind of like the blood of an engine, so imagine if suddenly an air bubble appeared in your bloodstream. You’d just sort of die, and it’s the same deal with an engine receiving air instead of oil.

When an engine drops a valve without any catastrophic event like a money shift happening, a few failures could happen. A brittle valve could fracture where the valve meets the stem or an improperly-machined valve could let valve keepers come loose. Another scenario is that a variable valve timing issue could try and force the valve to occupy the same space as the piston on an interference engine. Whatever the case, the outcome is similar. The fast-moving valves bash against the fast-moving piston, tearing each other to absolute shreds and potentially taking out the connecting rod on the way down to the oil pan. Because the engine loses compression on one cylinder as soon as the dropped valve stops sealing, it usually runs incredibly poorly as that cylinder is unable to do its job. Modern engine management systems will often detect this severe misfire, go into a failsafe mode and shut down power, echoing the failure experience reported by Mataxis and others.

So how many Broncos might be affected? Well, the NHTSA’s narrowed down the number of potentially affected units to 25,538 from the 2021 model year, which seems like a lot considering Ford sold 35,023 Broncos in 2021. According to the Bronco6G forum, 2022 models weren’t actually delivered until the first quarter of 2022, which leaves 72.9 percent of all 2021 Broncos potentially affected.

Right, enough numbers for now, let’s get to the carnage. There’s a perverse fascination that comes with looking at failed engines, and that’s still the case here. Someone posted a TikTok of a 2.7-powered Bronco with what looks like the aftermath of Robocop’s bachelor party at the bottom of the oil pan. Take a look at those chunks. Bronco6G forum member North7 has kindly annotated a screengrab of the oil pan, perfect for dissecting exactly what we’re looking at. It looks like we’re seeing some nice chunks of piston and connecting rod, along with what appears to possibly be a dropped valve. It’s a bit tough to tell on that last one as everything in the oil pan has been mashed into absolute bits, but there’s definitely a certain silhouette going on. 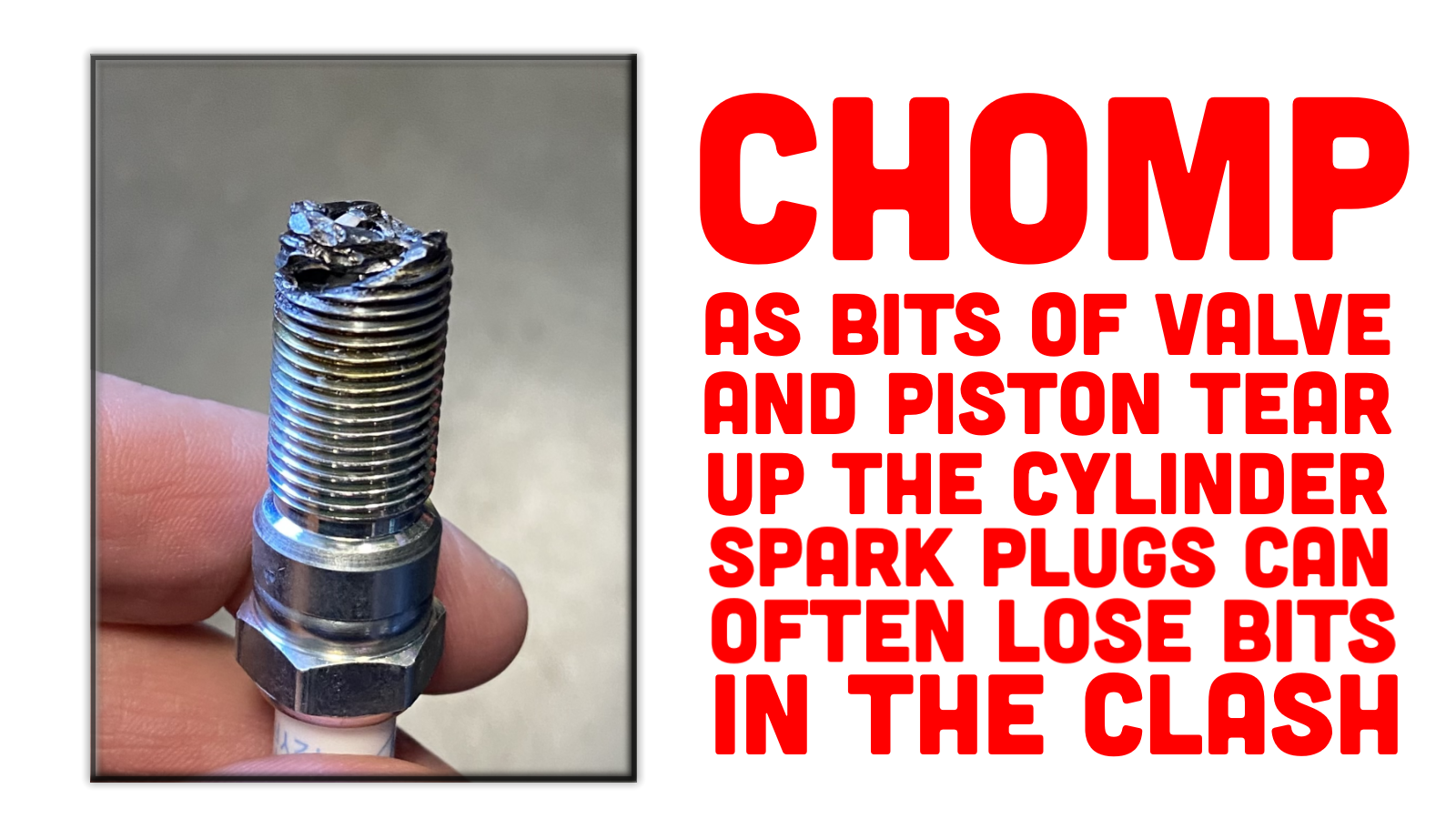 Bronco Nation user KennyMac also has an interesting pic of bits of a piston not being where they should. Yeah, it’s generally not good news when an engine’s like “I hereby pronounce you piston and valve, you may now kiss the valve.” Honestly, I bet that this connecting rod would’ve made a hell of a racket bashing against the cylinder walls. It’s also worth noting that several engines have chunks missing from the spark plug on the affected cylinder, the sort of thing you’d expect to see after chunks of metal bash their way around the cylinder. Although it’s possible that this Bronco issue is isolated to a particular batch of valves installed in a batch of engines shipped to Ford’s Michigan Assembly Plant, the true scope of the issue isn’t really known at this point. While there’s a chance everything will work its way through the warranty system, it might take a while.

See, we’ve only seen low-mileage engine failures so far. There’s definitely a chance that more failures will arise as Bronco owners pile miles on their V6-equipped rigs over the coming months. What’s more, Broncos might not be the only vehicle affected. See, while the Bronco was the first Ford to get the latest variant of the 2.7-liter V6, that engine can also be found in the F-150. While the F-150 is a much more mass-market vehicle so owners likely won’t be as loud about failures, reports of seized F-150 engines aren’t exactly nonexistent. This post on f150ecoboost.net details a familiar failure pattern – low mileage, unexpectedly failed engine that simply shut off.

Top tip, if you or anyone you know has experienced a major vehicle defect like sudden engine failure on a V6 Bronco, let the NHTSA know. You can get in touch with them by clicking this link, reporting a problem takes about as much time as ordering a pizza, and doing so could result in actual action.

It should go without saying that, if these reports prove accurate, brand new vehicles shouldn’t be experiencing rapid unplanned engine disassembly, and I’m saying that as someone with an affinity for German shitboxes who’ll brush aside V10 M5 rod bearing replacement as maintenance. It doesn’t help that between parts shortages and scarcity of both rental and loaner cars, engine replacement on a new car sounds like hell right now. Then there’s the possibility of trip interruption. What if you’re hundreds of miles from home when the engine in your new car goes pop? Your car could be stuck away from home for weeks waiting on parts. It’s going to be interesting to watch this defect investigation play out. Hopefully Bronco owners get an actual proactive solution rather than engine replacement after it blows. It’s typically much easier to prevent a disaster than to clean up after one.

[Editor’s Note: We temporarily un-published this post to remove an image of the wrong engine; we’d also like to note that for various reasons we haven’t been able to directly secure photos of owners’ failed engines, mostly due to dealer communication protocols, according to the author. If we are able to get confirmed images of the aftermath of one of these reported failures, we will update the post.  – JT]

Thomas is a Nu Rave-blaring, heel-toe downshifting, maple syrup-swilling, chassis-geeking, junkyard parts-hauling, floppy-haired scenester who's been writing about cars since college. His current ride is a 2006 BMW 325i with the six-speed manual gearbox. Instagram: @thomas.hundal Twitter: @thomashundal
Read All My Posts »
PrevPreviousThe 12V Battery In My Prius Somehow Caused A No Oil Pressure Warning Which Is Ridiculous
Next2023 Toyota Sequoia: All-New, All-Hybrid, All-Big As All-HellNext