Good Gaud: The Jeep D-Coder Concept Should Skip Moab For The Nearest Maaco (Or Landfill)

I know I know, that headline is a bit mean. But I praised the ’41 Concept, calling it the “Perfect Four-Door Wrangler.” And who would I be to praise the good but forego criticizing the bad? Certainly not a writer you could trust. So here I am, writing about the Jeep D-Coder concept, a Gladiator-based Easter Jeep Safari vehicle meant to showcase aftermarket components from Jeep Performance Parts. And while the vehicle accomplishes that goal, it doesn’t look good doing it.

One thing I try not to do as a journalist is make a habit out of writing scathing takes on things — takedowns just to create controversy and clicks. That’s overdone, doesn’t require a lot of talent, and usually ignores a bunch of context behind why something is the way it is. But then there are times when I just can’t hold my tongue; this is one of those times. This D-Coder concept is hideous.

The red bumpers, the red belly pan, the red rock rails, the red tubular doors, the red interior, the red snorkel, the red basket on the bedsides — it’s utterly ostentatious, which is so far from the Jeep Gladiator’s best look. As the ’41 Concept that I wrote about earlier today demonstrated, Jeep Wranglers (and their Gladiator derivatives) lend themselves best to simplicity — steel wheels, a simple color scheme, maybe some half doors, and not too much else. A bunch of flashy red on black? Yikes:

Again, this vehicle is all about showing off the “35 JPP and Mopar accessories, each painted in contrasting Maraschino Red and labeled with QR (quick response) codes,” so there is method behind this “rolling catalog of factory-tested and factory-backed items.” And it’s worth mentioning that every year the studio designers at Chrysler come up with epic designs like the ’41 Concept, while the folks at Jeep Performance Parts tend to come up with some gaudy, over-outfitted Jeep to show off MOPAR’s aftermarket capability; so this isn’t really new. What is new, I think, is just how gaudy things have gotten this year. Just wow: 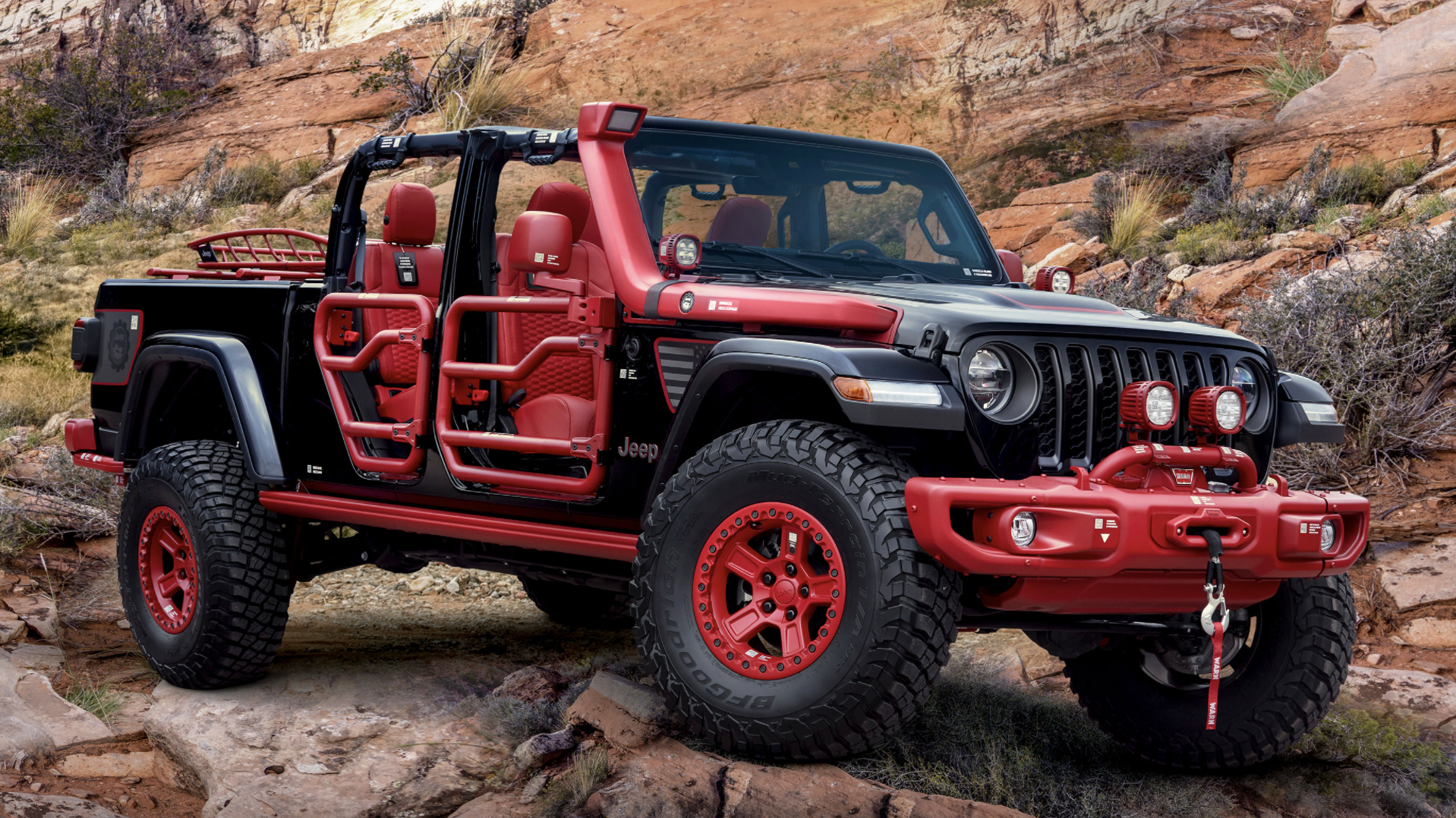 The D-Coder is based on a 3.6-liter V6 Gladiator Rubicon; there’s a three-piece bumper with a warn winch and some LED lights, some red tubular half-doors, a snorkel, 37-inch BF Goodrich tires on 17-inch beadlock wheels, a two-inch lift, some rock rails between the axles and behind of the rear, a Thule basket on MOPAR bed rails, bedliner, more LED lights on the cowl, leather seating, and a whole bunch more.

I’m a fan of the Gladiator. A convertible, off-road capable truck is just a cool thing. And I also realize that there are plenty of Jeep folks out there who like gaudy styling; the fact that this Rough Country “Angry Eyes” grille exists just proves that:

But the D-Coder is definitely a no from me, dog. Take it to a Maaco paint shop ASAP.

Rust-loving Jeep man, cofounder and EIC of The Autopian, Jason's friend. Email: david@autopian.com
Read All My Posts »
PrevPreviousElon Musk Says The Tesla Cybertruck Won’t Have Door Handles
NextThe Smart #1 Is Literally Pronounced ‘Smart Hashtag One’ Which Is A Shame Because It Seems Like A Cool EVNext