The Moab Easter Jeep Safari is nearly upon us, and — as has become annual tradition — Jeep is showing off a new set of EJS concept vehicles. Easily the best of this year’s lot is the “Jeep ’41 Concept,” a simple, World War II Jeep-themed Wrangler that is so perfect, it highlights the production Wrangler’s biggest shortcoming.

Probably one of the coolest things the Jeep brand does is create a bunch of cool concept cars just before each year’s Easter Jeep Safari annual off-road-fest in Moab, Utah. It’s something I’ve always appreciated, because this seems like an easy budget item to slash; I imagine it’s sometimes tough to justify the expense of this bit of design/fabrication fun, even though I realize there’s some marketing benefit.

Anyway, Jeep says this year’s concepts represent the “most impressive lineup of Easter Jeep Safari concepts ever,” and while that’s just hyperbole (previous years’ concepts have been much cooler) I do have to give props to whoever is behind the ’41 Concept, because it’s a damn masterpiece. 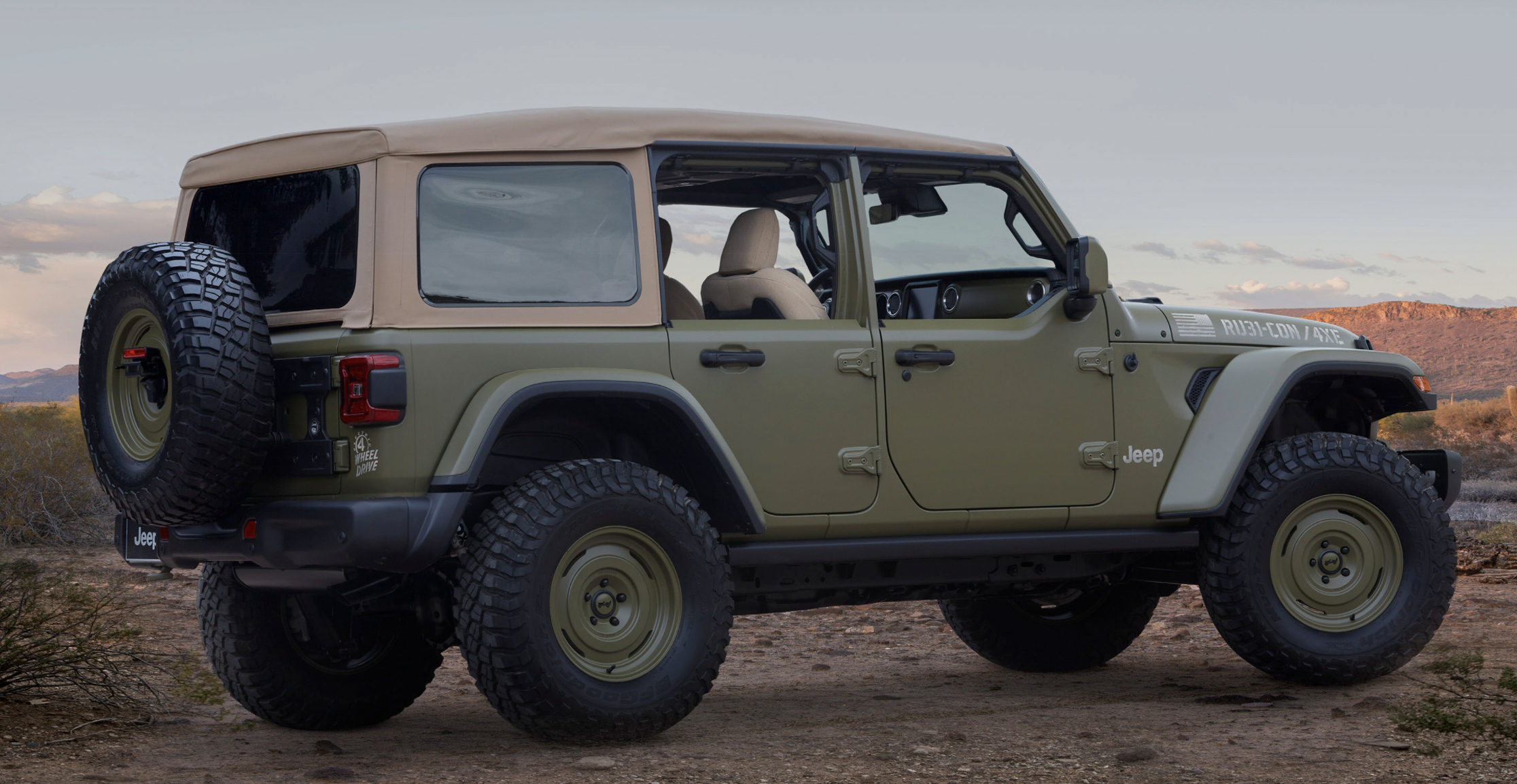 As technologically advanced as the Jeep Wrangler 4xe plug-in hybrid is (well, for a Wrangler), it’s clear that the vehicle still looks best when its styling is kept simple. Matte olive drab paint, olive drab steel-looking wheels (they’re actually aluminum, it turns out), black bumpers, half doors, a tan top, a little two-inch lift and some aggressive 35-inch mud-terrain tires — that’s all a four-door Wrangler needs to look fantastic.

The cool Willys-era four-wheel drive stencil on the right rear corner, the graphics on the hood, the winch bumper, the rock rails — it all just works. Would I prefer a two-door for more WWII authenticity? Would I like a simpler front bumper design? Do I think basic incandescent lights would look more appropriate here? Do I like a stick shift? The answer to all of these is “sure,” but I’m a diehard wierdo, and the ’41 Concept looks great as it sits. Aesthetically, it’s basically the perfect four-door JL. 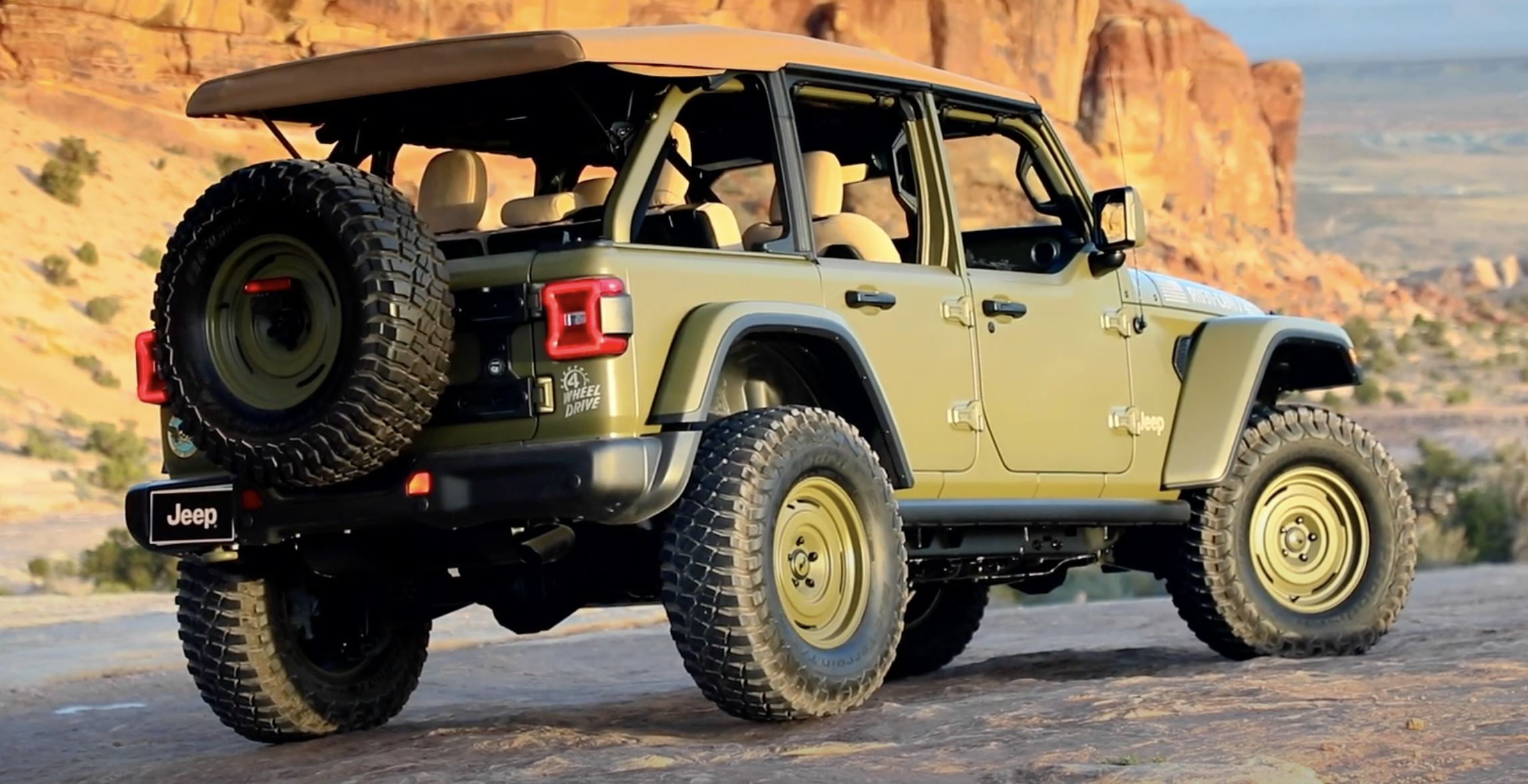 Inside, the seats are tan (“canvas-covered,” per Jeep), the floor has been Rhino-lined in olive drab, there’s a custom cap on the shifter, and the inserts on the dash match the exterior paint scheme. Here’s a look at the ’41 Concept off-roading out in Moab:

Oh yeah, look at that flex: 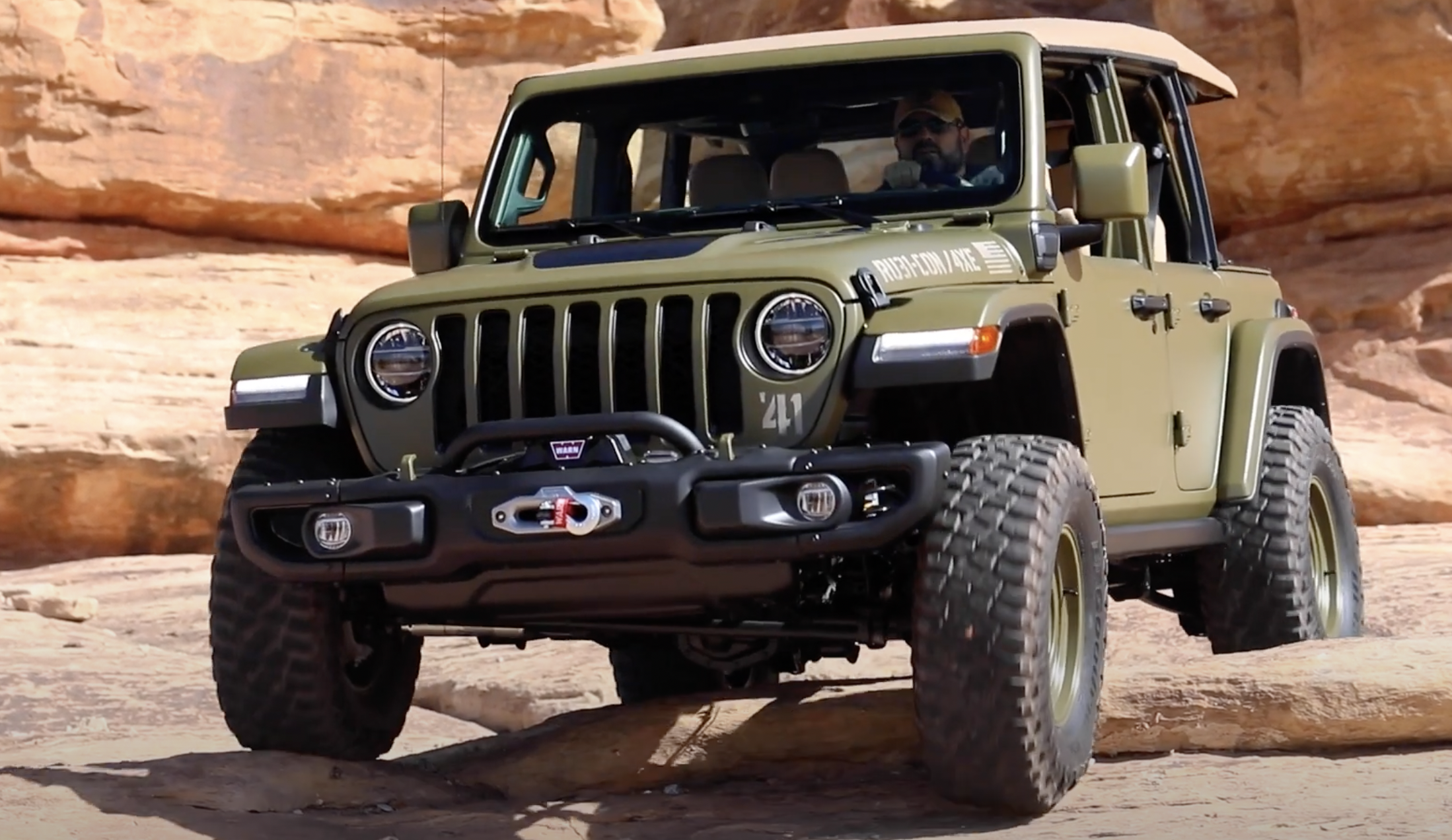 Anyway, I have to point out something that’s been bothering me for a while. I’ve been so close to buying a new Jeep Wrangler JL; having been on the engineering team, I feel an emotional appeal to ordering one brand new from the factory.

Here’s how I want to spec it out: base Sport in Sarge Green, half doors, tan top, tan seats, air conditioning, zero other options. As the ’41 Concept shows, green with a tan top just works, as do those half-doors. They’re glorious. 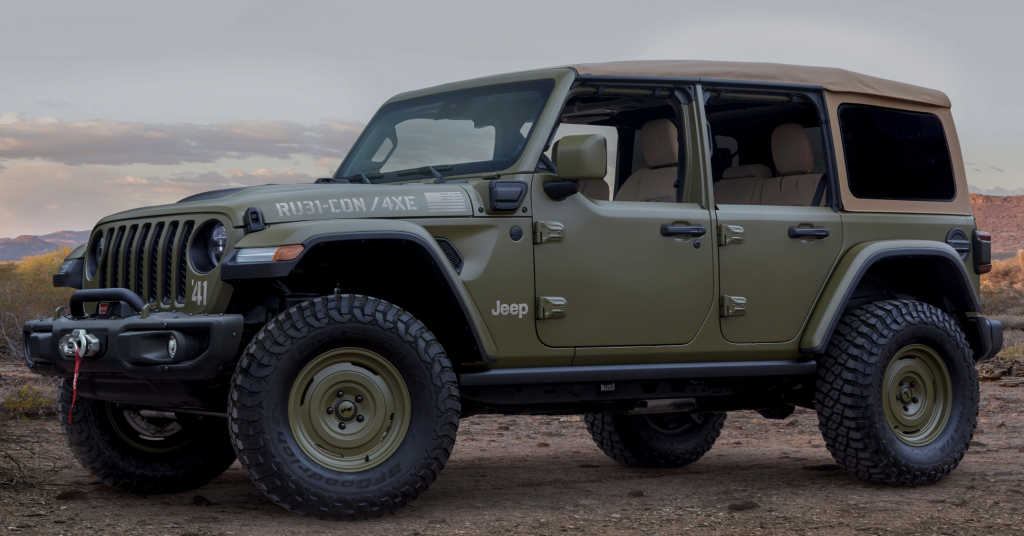 But there are some problems; first, the tan top isn’t available on the base Sport, so I’d have to go to the Sport S. I can deal with that. Here comes the biggest issue: You cannot order a tan-top with half doors unless you’re willing to deal with this Reese’s Peanut Butter Cup-esque monstrosity:

[Ed note: I suggested to David that maybe a black-and-tan might be a better analogy than a Reese’s Cup because it’s very literally black and tan. David had never heard of one. Possibly one of the most common things you can order at a bar, half-Guinness, half-Bass or whatever. How do you hit 30 and have never seen a black-and-tan? Oh, and I just found out the Irish find the name offensive and call it a Half and Half, so maybe I have some growing up to do, too — JT] 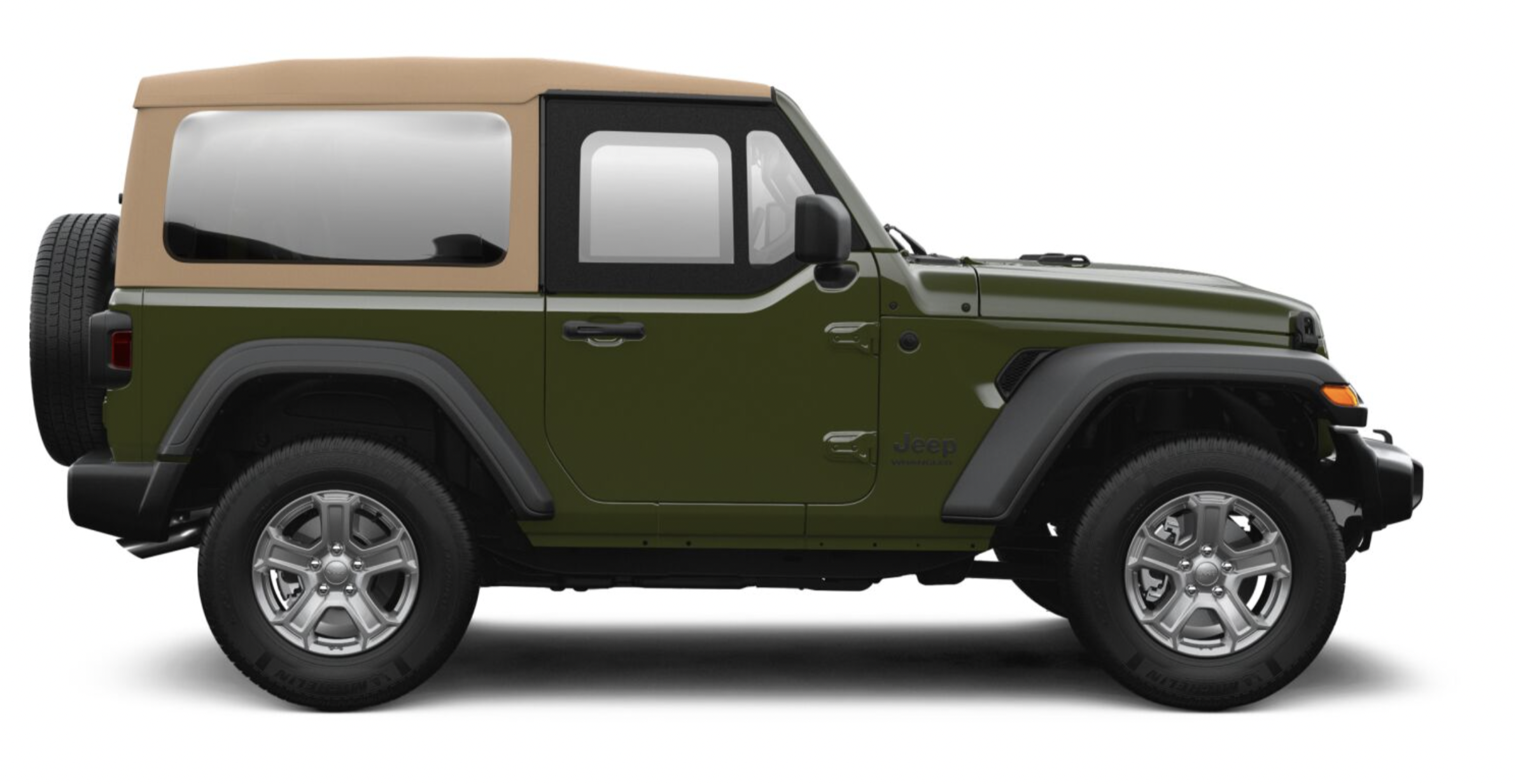 That’s right. There are no tan uppers for those half-doors, just black ones. And that’s a shame, because this just looks fantastic: 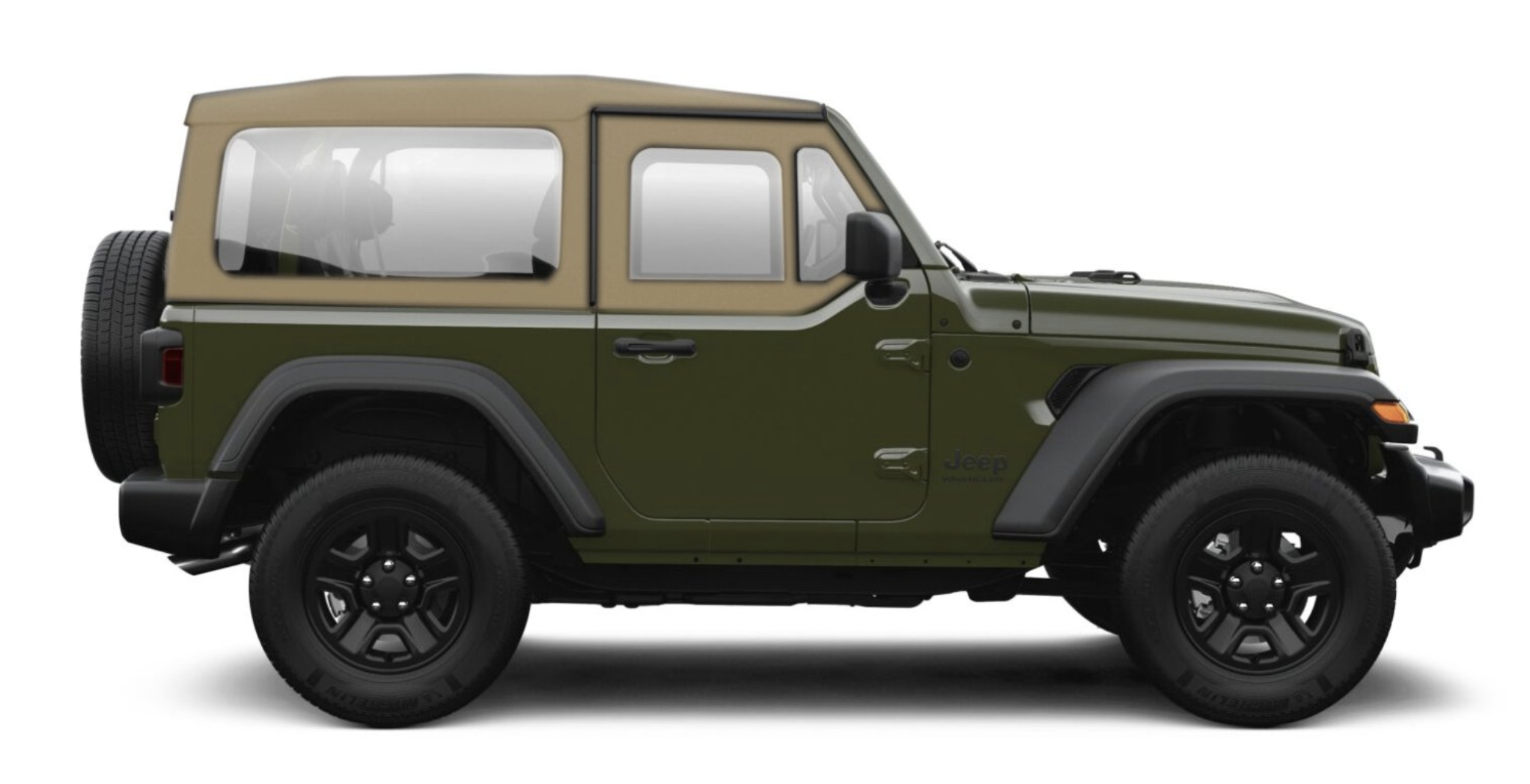 So the Jeep ’41 Concept is great — I love the green-on-tan, but notice how there are no door uppers in any of the photos. Now you know why. And — even though I know there’s zero financial case to make for offering tan uppers, given how few folks want both half doors and a tan top — it’s just a damn shame, I say.

Rust-loving Jeep man, cofounder and EIC of The Autopian, Jason's friend. Email: david@autopian.com
Read All My Posts »
PrevPreviousThree Americans and a German Set a Low Bar. Vote For Shitbox Of The Week!
NextThat Time Jaguar Almost Invented The Dune BuggyNext