If someone asks you to picture a dune buggy in your mind, I suspect most of you would imagine something a lot like the iconic VW Beetle-based Meyers Manx–open top, short wheelbase, sloping front, minimal overhangs, rear engine, big wheels–you can picture it. And while the Manx did define the whole category of dune buggies ever since it came out in 1964, what’s less known is that Jaguar, of all companies, built a car that is uncannily like the dune buggies we all know, but they did it over 20 years earlier, and for very different reasons. Meet the Jaguar VA Lightweight Military Vehicle.

The VA Lightweight Military Vehicle was designed during WWII and commissioned by the British Ministry of Supply. What the Ministry wanted was a car that could be just dropped right out of a plane, with a parachute, alongside paratroopers, who would just get into the cars upon landing and take right off, with no further assembly or preparation needed.

This concept of a light, air-droppable vehicle is certainly not new in warfare, and comes up again and again. Two later well-known examples of a vehicles made for similar drop-from-sky purposes are the remarkable air-cooled V4-powered AMC Mighty Mite in 1959 and the Land Rover 1/2 Ton Lightweight from 1965. Here’s a look at those two: 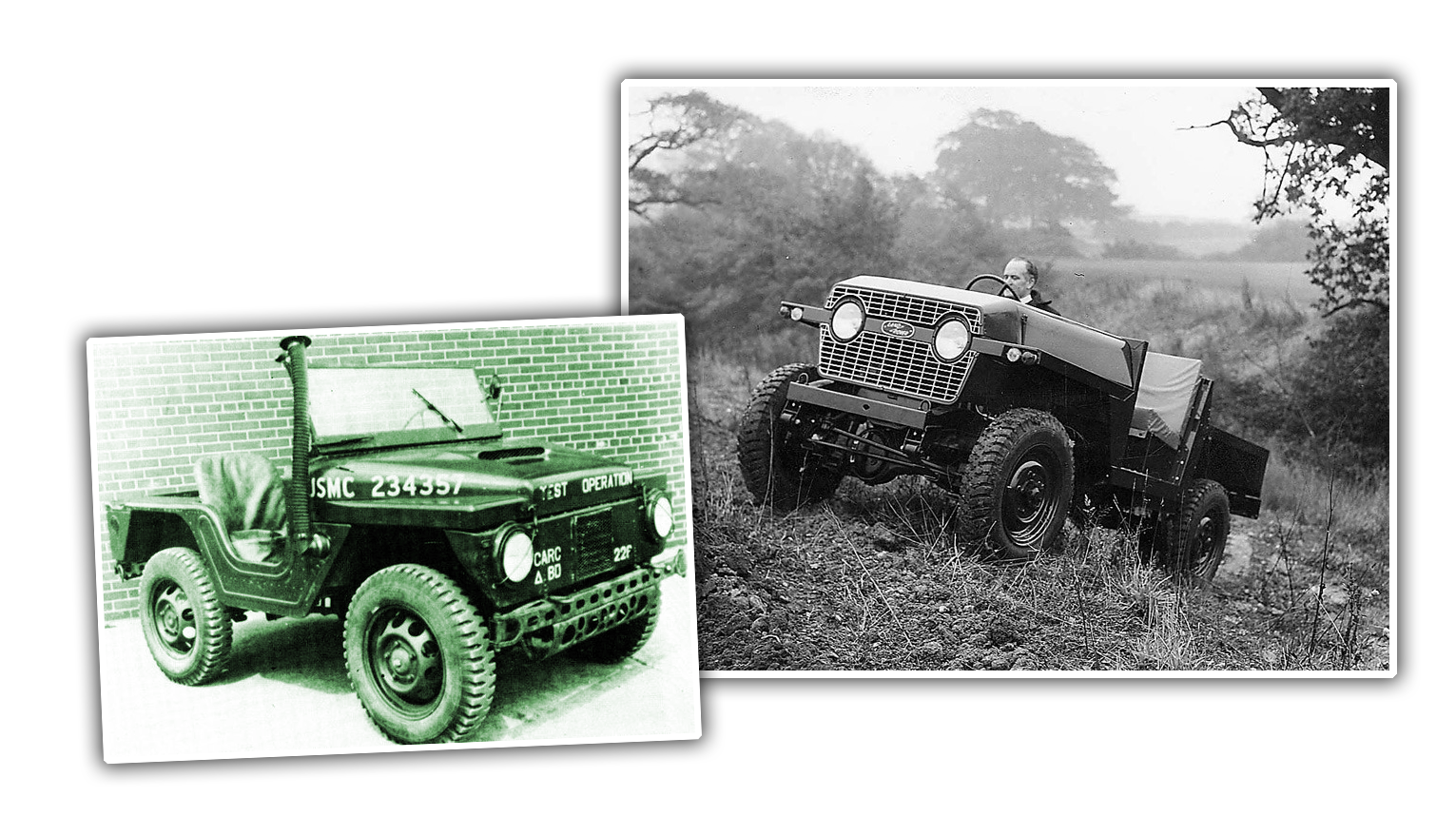 To pull off something like this, you’d need a really, really lightweight vehicle, something robust and simple and capable, smaller and lighter than the already decidedly not-large Willys Jeep. To make it happen, SS/Jaguar (remember, Jaguar started life as a company named Swallow Sidecar, and kept the SS as part of the company name until other aspects of the war we’re talking about made the SS name less desirable) built its first-ever vehicle using a unibody design, in this case a simple unibody of folded steel.

The prototype had independent suspension and an air-cooled JAP twin-cylinder engine which was mounted right on the rear axle; you can see the big air intake scoop in the picture at the top of this article.

Engineer Wally Hassan, who headed up the project, said this about the little car:

“It was very light, not top heavy like the American Jeep, and was very simply engineered, but it was strong and even though only two-wheel-drive it performed reasonably well but it was just not powerful enough and we moved on to the next idea.”

Only one was ever built, as a combination of the car being determined insufficiently powerful and the simultaneous increase in power and payload capacity of aircraft soon made dropping Jeeps by parachute a viable option, so the VA died after this one remarkable little car.

What I can’t get over is just how much this thing feels like a direct precursor to the Volkswagen-based Meyers Manx and all the innumerable shortened-VW-chassis-built copycats that followed it. The designs are incredibly similar, with even their fundamental proportions and shape being essentially the same–one is just realized in thin metal, the other in fiberglass.

In case you’ve somehow recently taken a couple of bowling balls to the head and aren’t aware of the Meyers Manx, or the entire copycat category of dune buggies it spawned, these were cheap, backyard-built kit cars that were developed in the 1960s by modifying plentiful and inexpensive Volkswagen Beetle chassis with a focus on increasing off-road capability.

You’d source a VW pan from somewhere–during the ’60s and ’70s it seemed like you could find them behind every single gas station–chop about 14 inches from the middle, and bolt on a fiberglass tub-like body (very likely looking like the design of the original Manx but far more likely to be some copycat, of which there were plenty, even from huge names like Sears): 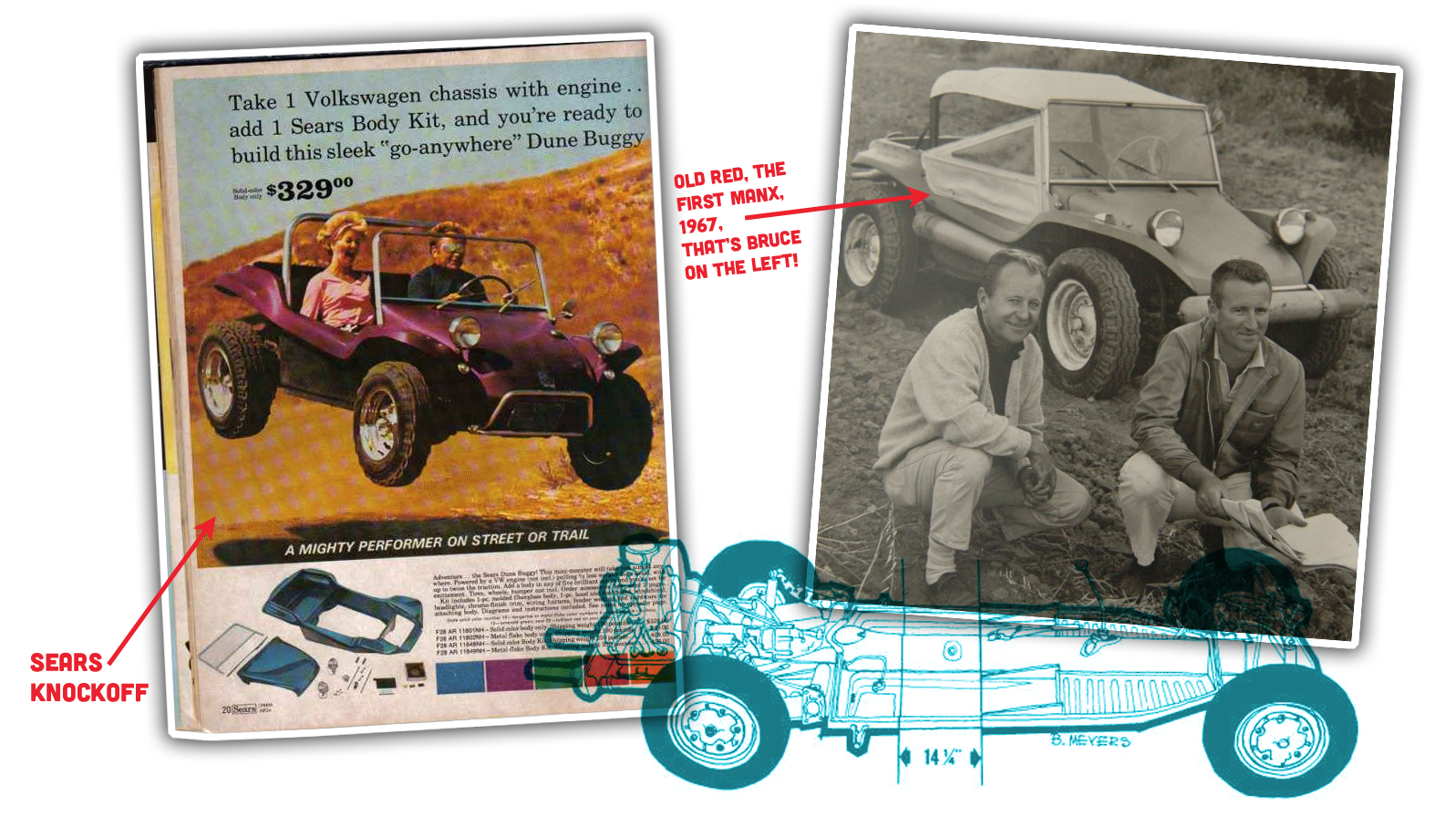 War and peace sometimes provide similar demands of our vehicles, even if why we’re making those demands are nowhere near the same. I can’t think of a better example of that than this incredible, prescient, yet doomed little Jaguar.

I'm a co-founder of the Autopian, the site you're on RIGHT NOW! I'm here to talk to you about taillights until you cry and beg me to stop, which I absolutely will not. Sorry. Hug? Also, David's friend.
Read All My Posts »
PrevPreviousThe Jeep ’41 Concept: The Perfect Four-Door Wrangler Exposes The Production Jeep’s #1 Flaw
NextElon Musk Says The Tesla Cybertruck Won’t Have Door HandlesNext