The bouncer at Randy’s Red Rears, Daytona Beach’s seediest Taillight-Community Strip Club, was sitting on me with all his weight, as his big, meaty hands worked to free the twin air horns I had clenched in my own, far smaller, hands. A huge poster was laying on the floor next to me, where it had been torn off the wall, but you could still make out the image of a mid ’60s Volkswagen taillight on it, with the alphanumerics M018 in big, bold letters above. The bouncer may have stopped my attempt to let the horny, drunk, taillight-loving patrons of Randy’s Red Rears know about this incredible bit of VW taillight history, but he can’t stop me from telling all of you, even if he came pretty close by twisting my fingers around so much.

While I now realize that the patrons of even a taillight-themed strip club don’t like to hear the ear-splitting sound of two air horns as a crazed little man screams at them, excitedly, about a kind of VW taillight he wasn’t aware of, I think the issue had more to do with my ill-conceived presentation than it did with the subject.

I say this because as a hardcore VW Beetle taillight fetishist, there is almost nothing better than the personal discovery of a previously-unknown Beetle taillight varietal. And, thanks to my friend and legendary VW aficionado Tory who sent me this eBay link, I have once again experienced the sublime joys of a brush with the Beetle Taillight Unknown.

Behold, my friends, the taillight known as Option M018: 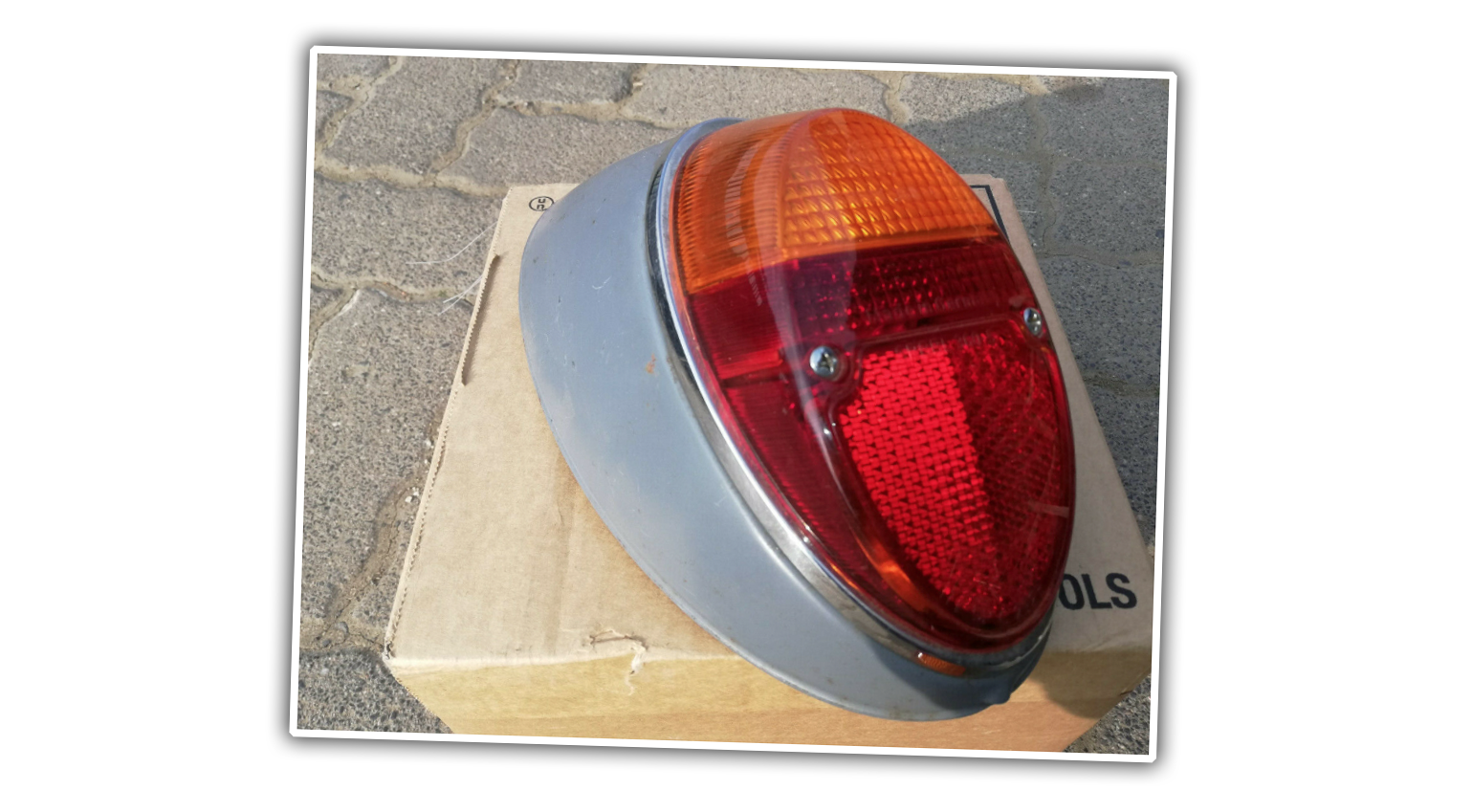 At first, you may think this looks just like any oval, three-sectioned Beetle taillight — the sort that was used (in all-red form, on US-spec cars) from 1962 to 1967, and longer on European, Brazilian, South African and other-market Beetles, albeit with the amber turn indicator section.

But something is different; while the three primary sections are the same (from top to bottom, indicator, brake/tail, and reflector area) the proportions of those last two sections are very, very different. 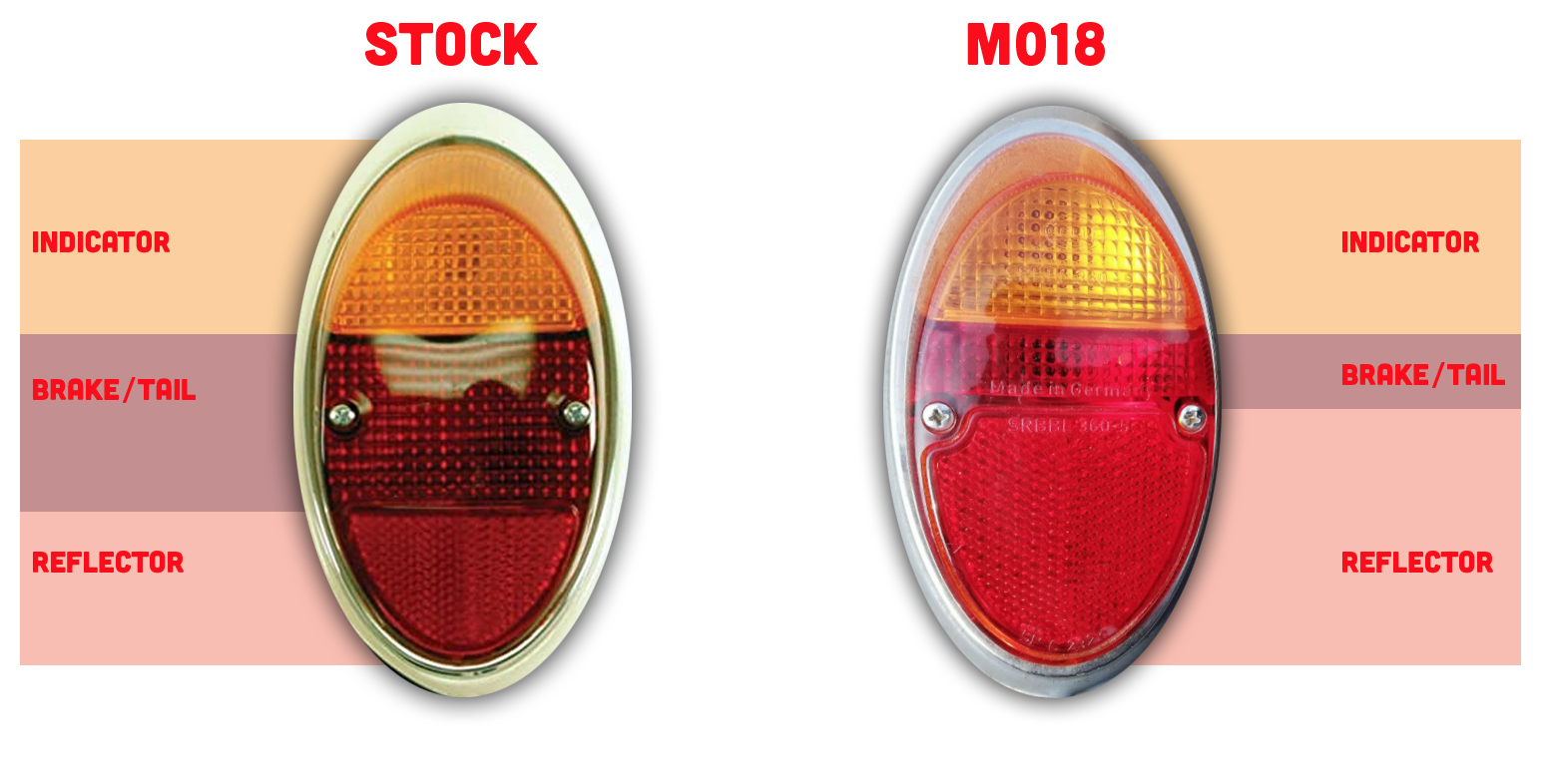 What the hell is going on here? The reflector section on option M018 is at least twice the size of the stock taillamp’s, reducing the brake/tail section to about half its normal size.

Now, VW, unlike many carmakers, has a long history of using the reflector section as a lens as well, putting light bulbs behind reflectors and letting those sections of the taillight emit light as well as reflecting it, so I do not believe that there would be any amount of light blockage from this lamp design. A look at the rear of the lamp, again from that eBay listing, confirms this: 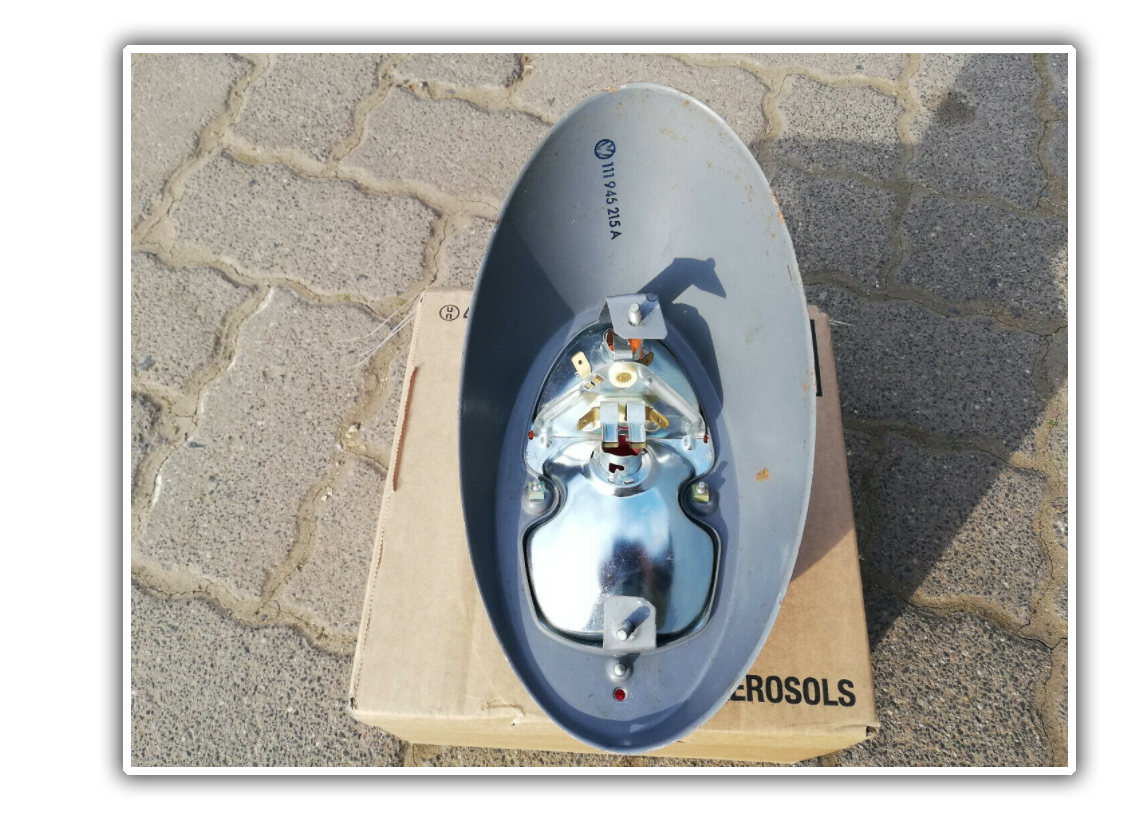 Still, that doesn’t answer why this option would exist at all? Why have a whole other taillight option that just has a doubled-in-size reflector area?

A bit of digging online gives a few hints; the always informative online VW forum The Samba offers some answers:

“I can confirm M018 rear lenses are plastic with a large diamond reflector (rather than the snow flake or chevron)usually found on cars in Sweden, possibly in Norway and Denmark.very rare to find!!”

So, according to a poster named cj1971, who wrote about these in a 2011 reply, these rare taillights were usually found in Scandinavian countries. Another thread dedicated to the M018 option shows that this option, the larger-area reflector option, was available on several generations of VW taillights, and reinforces that it was normally sold in Swedish/Nordic markets.

So perhaps M018 is best thought of as a sub-group of VW taillights, a larger-reflector’d variant that lives in Scandinavia, perhaps existing because those cold, northerly countries have very long nights for much of the year, and perhaps a larger reflective surface on those lights would help parked cars be spotted more easily on dark and snowy or foggy nights?

Some links for M018 lights specifically refer to them as “Swedish” taillights, and there appears to be at least one example of a very early Karmann Ghia optioned with M018 taillights, though the picture in this ad does not appear to show taillights of a different design than a normal 1955 ‘low light’ Ghia.

There is likely still a lot more research to be done here; for the moment, I propose a new addendum to the standard Beetle taillight taxonomy.

If we are sticking with the usual grouping of The Seventeen — the baseline 17 most common Beetle taillights throughout the years,  the standard set that you’ll find taught in any collegiate VW Beetle taillight 101 class, and also with the generally-accepted addenda of the “Mad Belgian” taillights (Belgium-market round-reflector lights) and the late-Brazilian smoked-lens “elephant’s foot lights,” also known as The Smoky Brazilian — then I think we can petition to add a separate sub-category of M018-option lights.

They’re not exactly entirely new lights, more like varieties of stock lights from around 1955 to 1967.

I realize this may be controversial, and I expect a lot of debate in the Greater Taillight Community to ultimately determine how these should be classified. But I promise I won’t try to bring it up at any taillight community strip clubs anymore. I learned my lesson.

I'm a co-founder of the Autopian, the site you're on RIGHT NOW! I'm here to talk to you about taillights until you cry and beg me to stop, which I absolutely will not. Sorry. Hug? Also, David's friend.
Read All My Posts »
PrevPreviousCold Start: There’s A Face In A Face In Here
NextSleeping Beauties: Which Long-Slumbering Longroof Would You Awaken?Next