Ahem… “Two wagons, both lacking in dignity, in fair Oregon, where we lay our scene. With ancient bolts that break under new scrutiny, these projects wait to make your hands unclean.” Or something like that. Apologies to any Shakespeare fans out there. It’s time for Shitbox Showdown!

Yesterday we learned two things: One, David Tracy needs to brush up on his car-chase-movie canon, and two, I am not infallible. As readers pointed out, the 9C1 Chevy Caprice in the early ’90s came with a 4.3 liter V8, not a V6. The V6 was only in the taxi package, SEO code 9C6. I knew that. In my defense, I worked at a garage in the ’90s that gave special rates to taxi fleets, and I probably serviced a couple thousand taxi-spec V6 Caprices in that time. I completely forgot there was a V8 of the same displacement.

[Editor’s note: We considered suspending Mr. Tucker for his egregious error, but we’re giving him one last chance. Should he forget how many main bearings are in a Chrysler slant six or what the firing order of a straight-eight is, consequences will be severe -DT].

Anyway, per your voting, the Crown Vic mopped the floor with the Caprice, as I suspected would happen. Love for those old Panthers runs deep. So now we have a Volkswagen, a Buick, and a Ford heading into Friday’s first-ever weekly showdown. They will be joined by either a Studebaker, or a Datsun; that’s for you to decide. Right now. 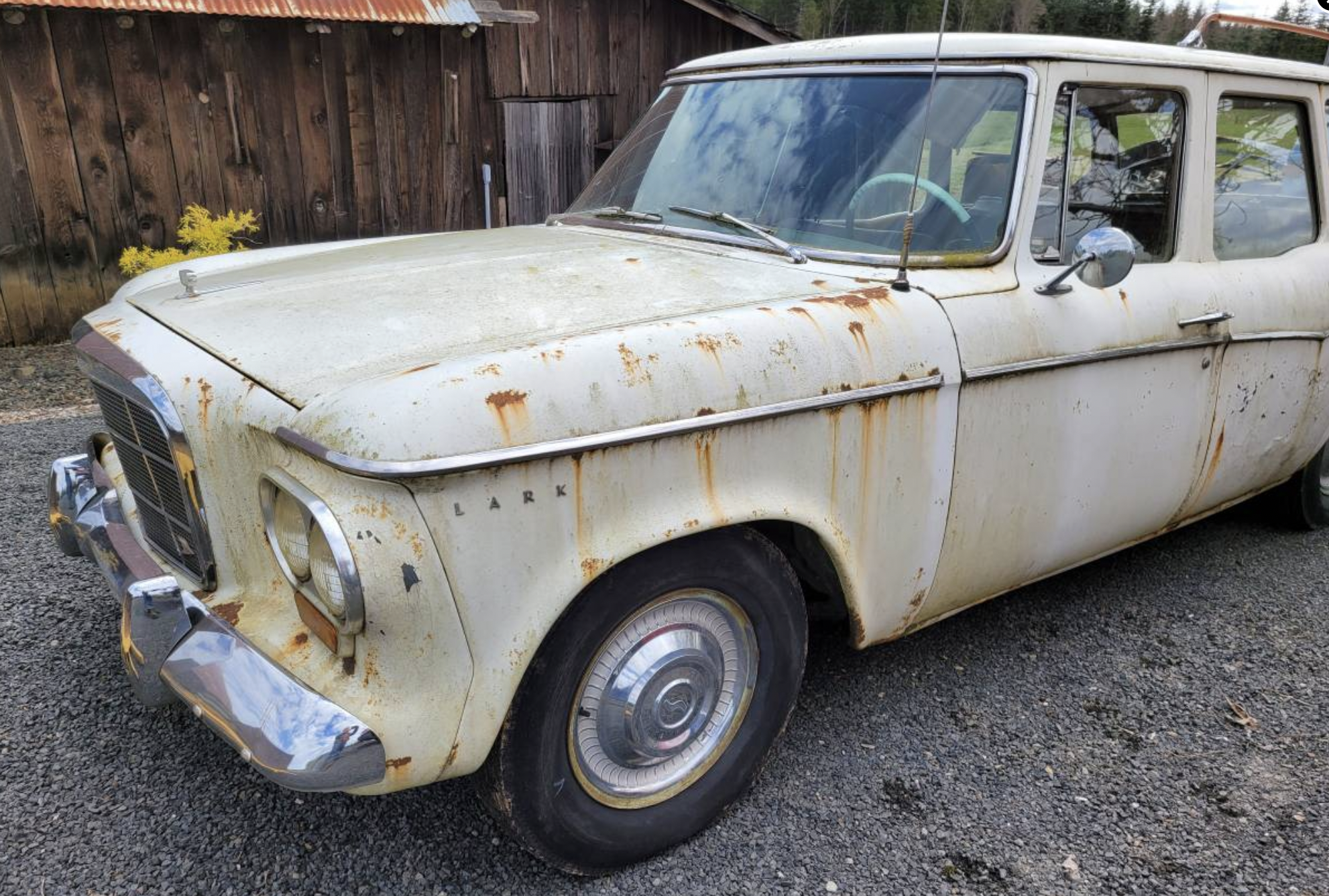 [Editor’s note: For the second consecutive day, one of Mark’s references went right over my head. I guess “Through Being Cool” is a Devo reference? I have no idea who Devo is. Is there a relation to Betsy Devos? Is she just the plural of it? -DT]

Studebaker was already in deep financial trouble by the time it built this now-apparently-sold 1962 Lark VIII Regal wagon. The company simply couldn’t compete with the Big Three on volume or price, and despite a takeover by Packard and support from Curtiss-Wright, the writing was already on the wall. The Studebaker Corporation (or Studebaker-Packard as it was known when this car was built) would barely make it past the Summer of Love. Their storied South Bend, Indiana factory shut its doors even earlier, just before Christmas of 1963 — an ignominious end to America’s oldest vehicle manufacturer at the time. 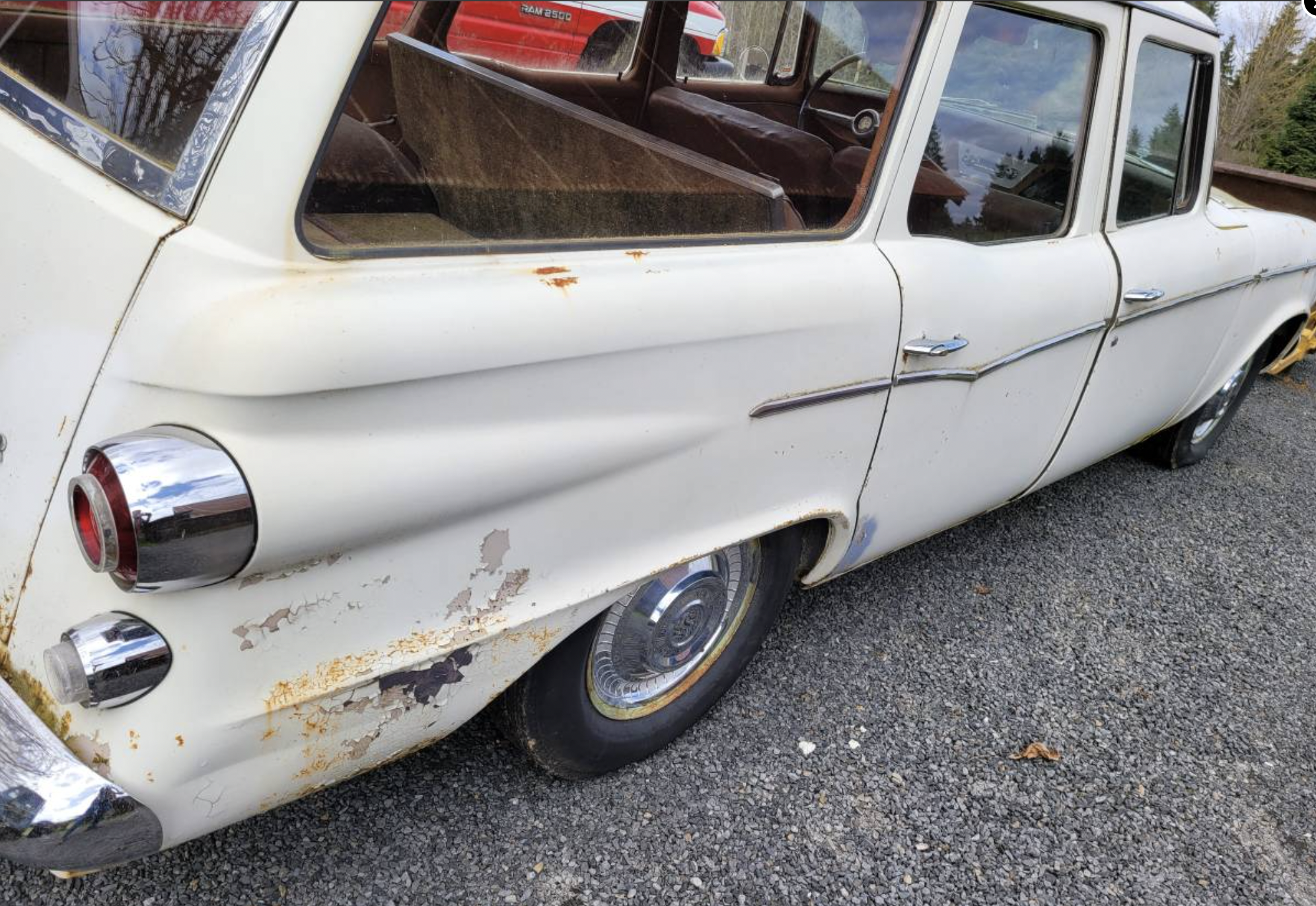 It’s a shame, too, because the cars themselves were wonderful. Their technology was state-of-the-art, their performance was excellent, and their styling in the 1950s and ’60s oozed effortless Jet Age cool, thanks to powerhouse designers like Virgil Exner, Raymond Loewy, and Brooks Stevens, who penned this second-generation Lark (and later the Weinermobile and the original Jeep Wagoneer). But not even Loewy’s sexy, speedy Avanti or deeply weird concepts like the Westinghouse pickup could save Studebaker. 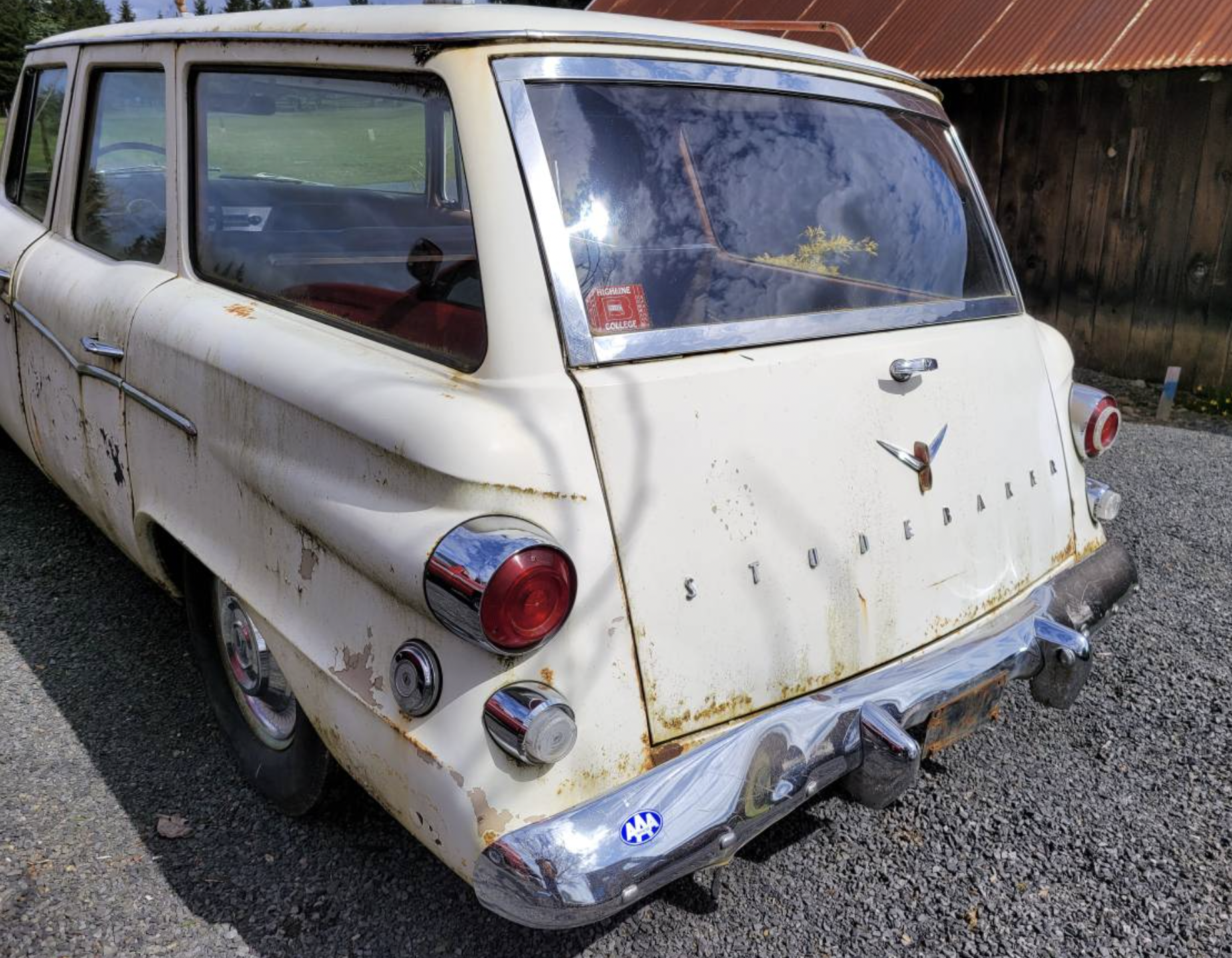 This new-for-1962 Lark wagon features Studebaker’s 289 cubic-inch V8 and a three-on-the-tree with overdrive. But if that weren’t enough for you, Studebaker offered this engine with a supercharger as well; that engine powered an Avanti to over 170 mph in 1963, a multiple-record-breaking speed for a production car at the time. 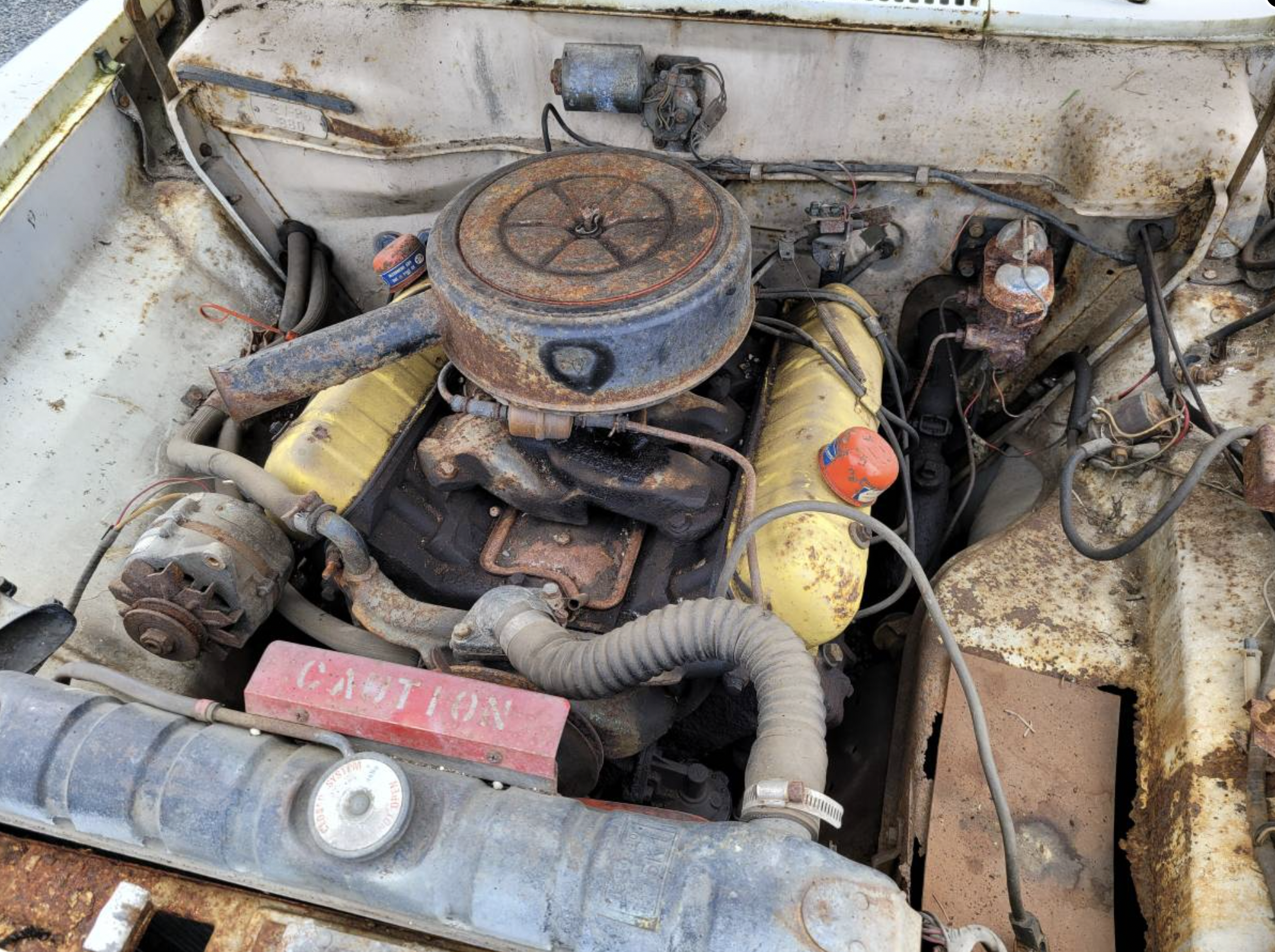 What surprises me most about this particular Lark is that, in sixty years of existence, it somehow has managed not to acquire a Ron Jon’s Surf Shop sticker. This thing just looks like it should have surfboards hanging out the back, no matter how far inland it traveled. Maybe the new owner will rectify that. 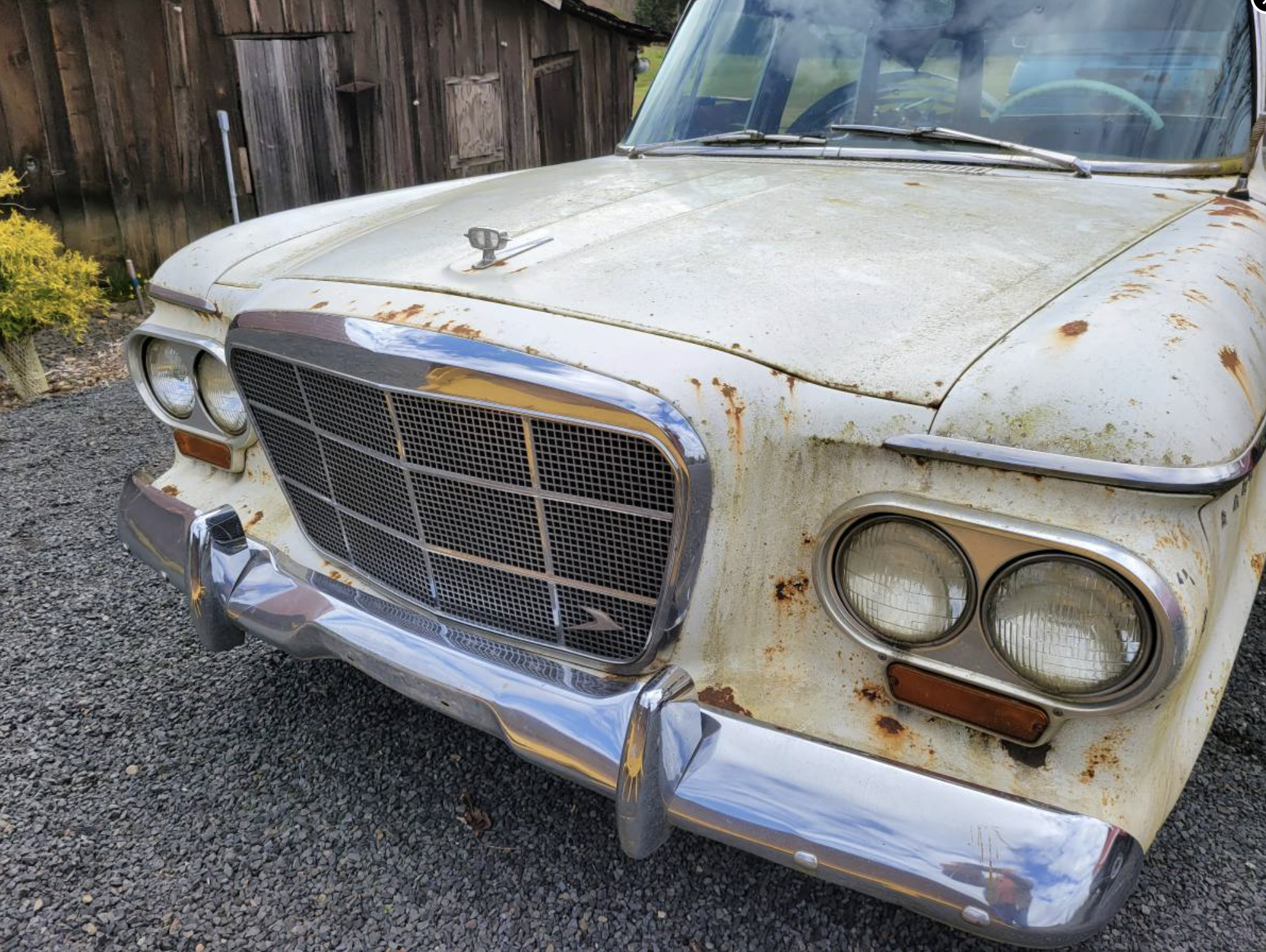 [Hi, it’s me, the editor, David Tracy. I’m going to pop in here because I cannot contain my love for this incredible Studebaker wagon. It appears to be complete, fitted with a V8 and a three-on-the-tree manual transmission — a holy pairing.

The interior looks complete, and features the Drive-In Movie Special, a beloved bench seat (okay okay, it’s a split bench. But still). Sure, it needs a bit of work, but the carpeting and dash don’t look bad! 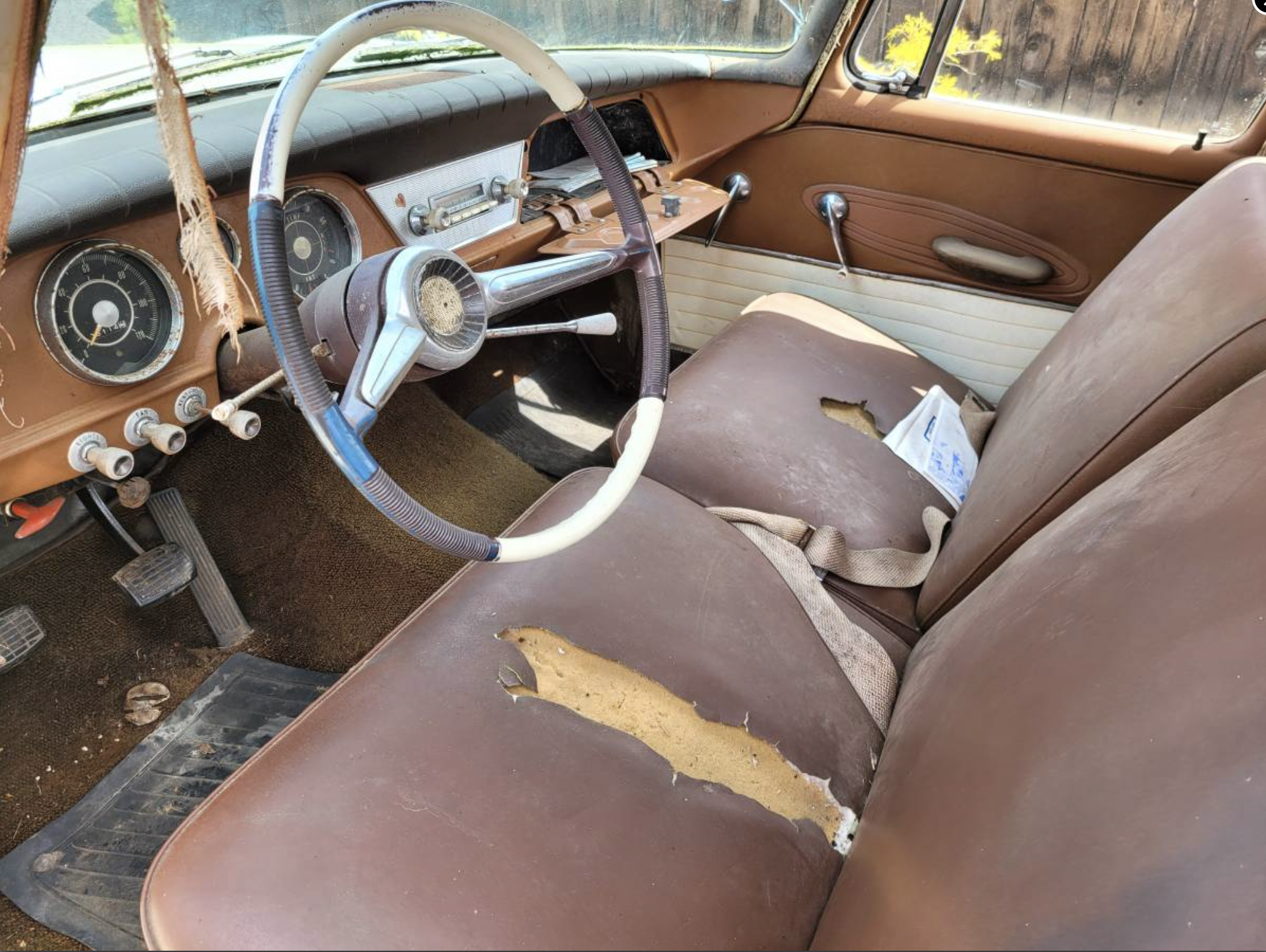 The headliner does need some help: 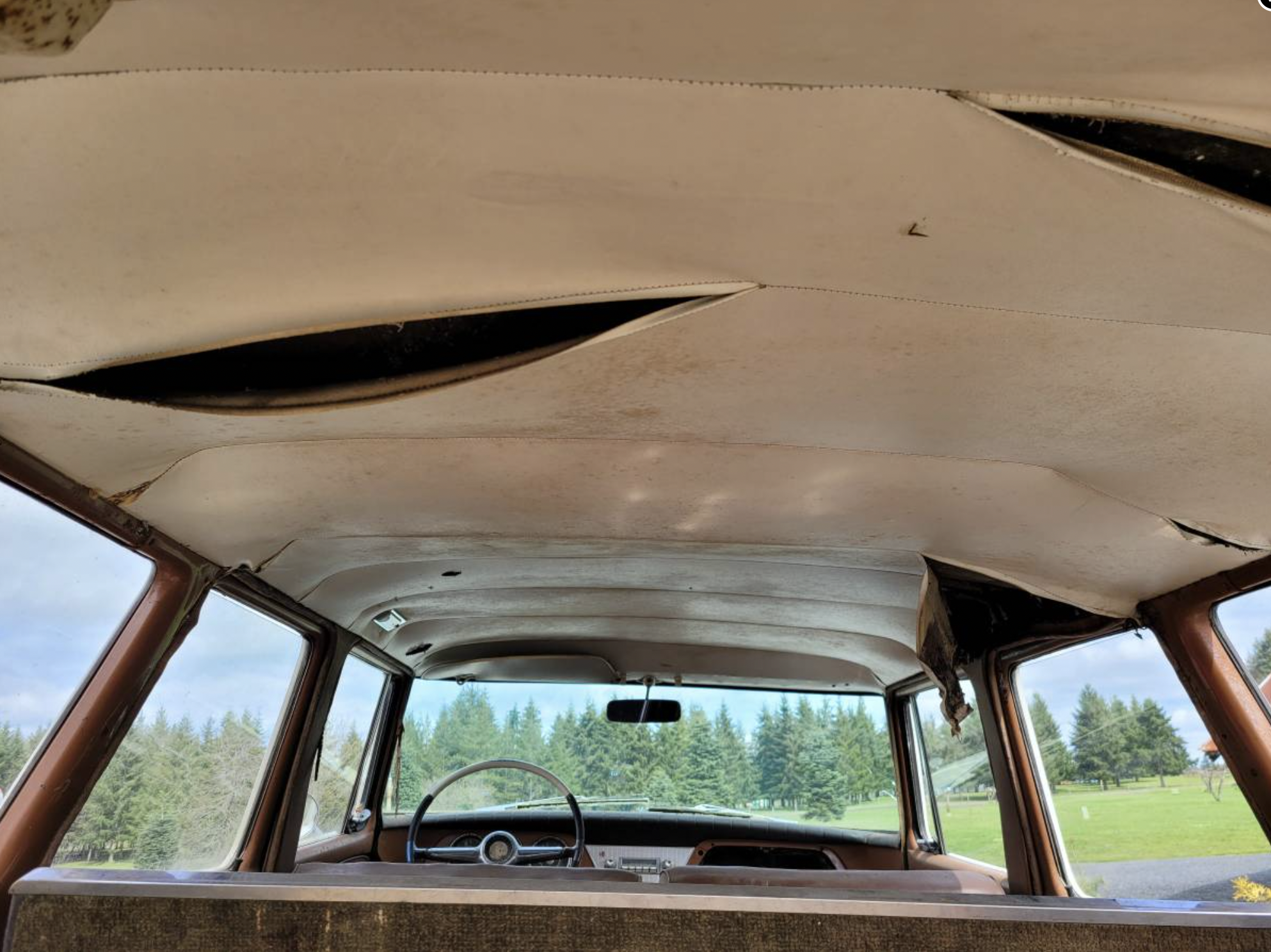 And there does seem to be some rust around the rear tailgate hinge (how awesome is the tailgate, though?!): 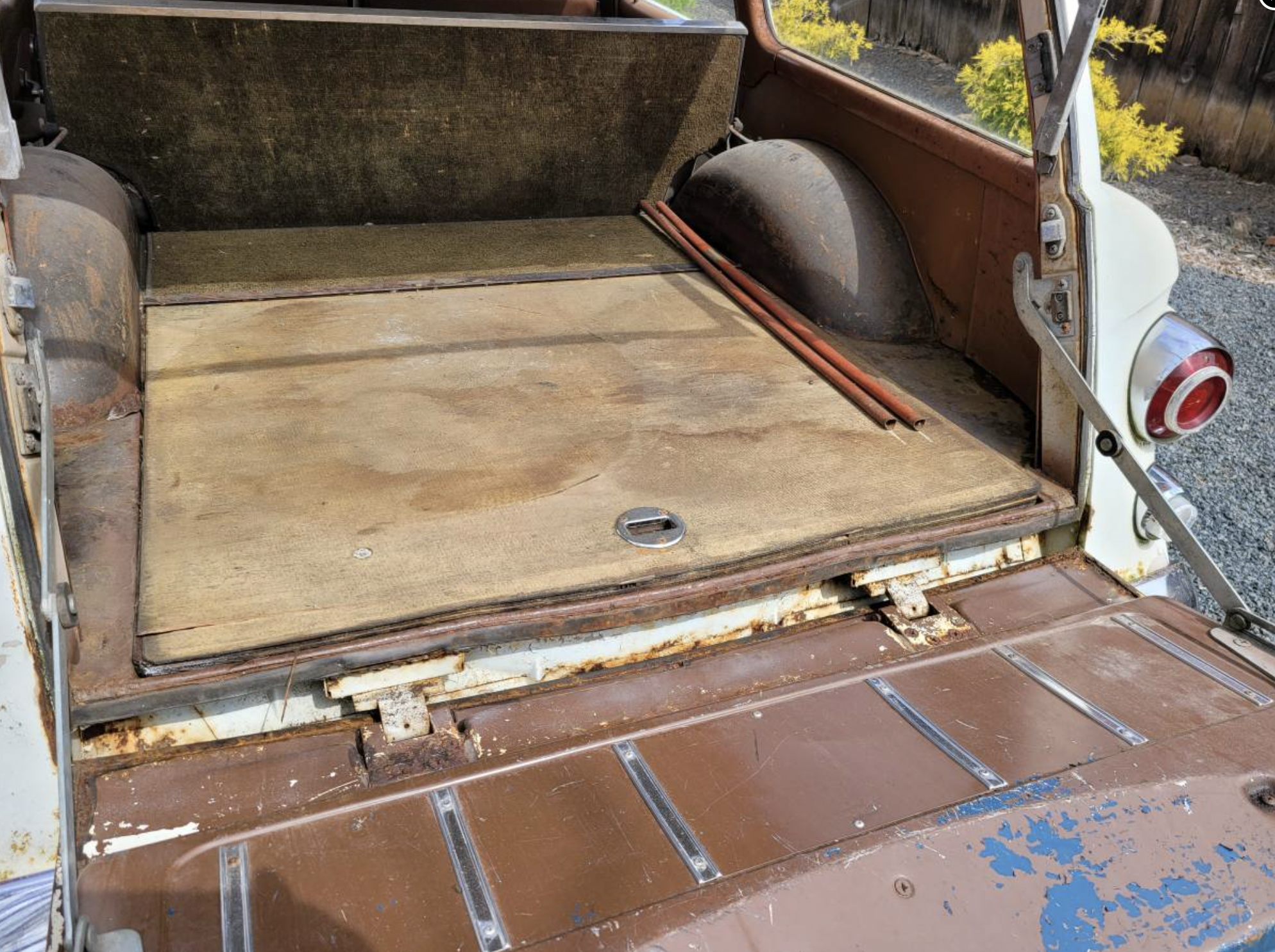 But underneath, this thing looks clean despite being stored outside. Speaking of, this listing contains perhaps the greatest marketing line I’ve ever seen on a used car posting: “its outside so patina will continue to improve.” Genius. 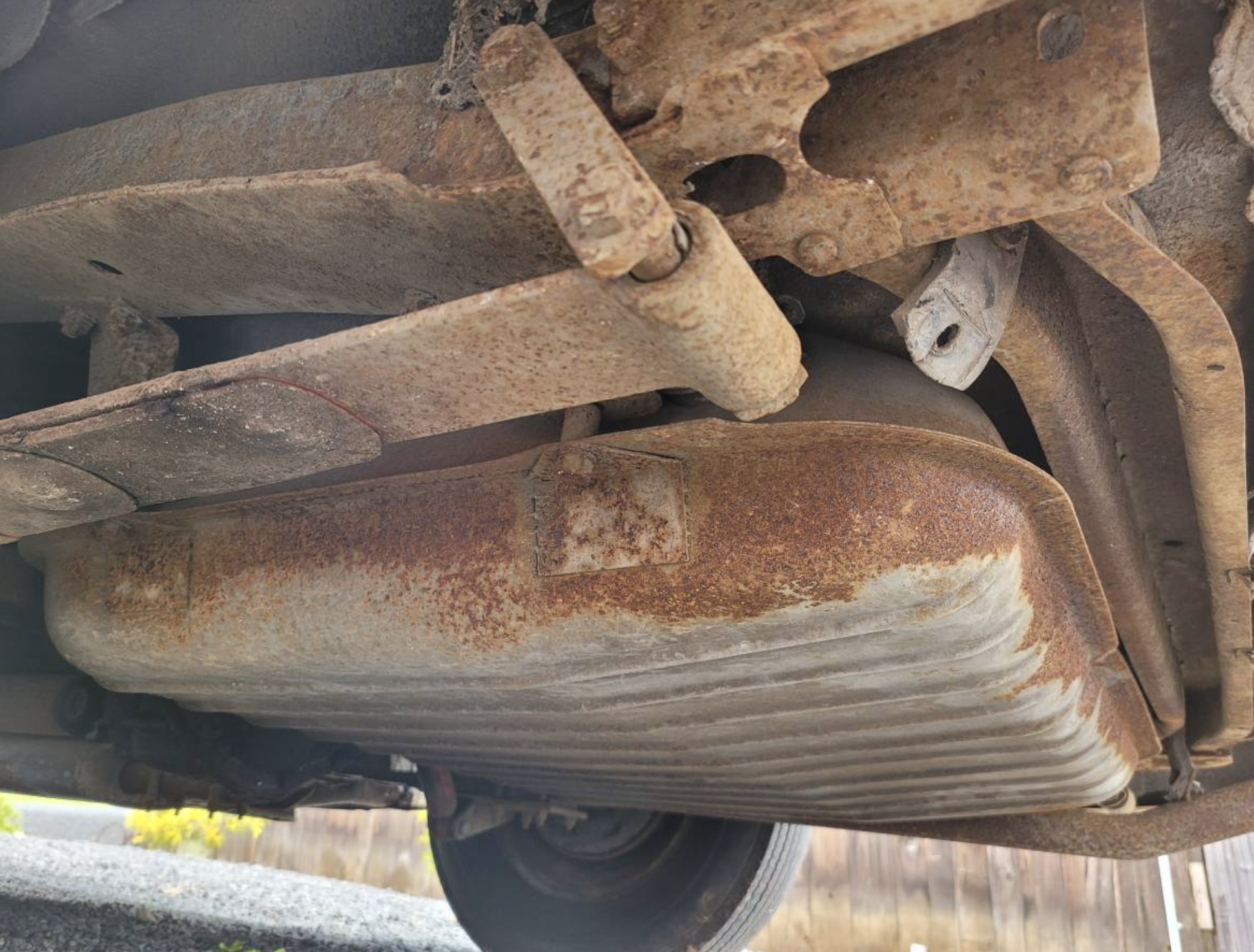 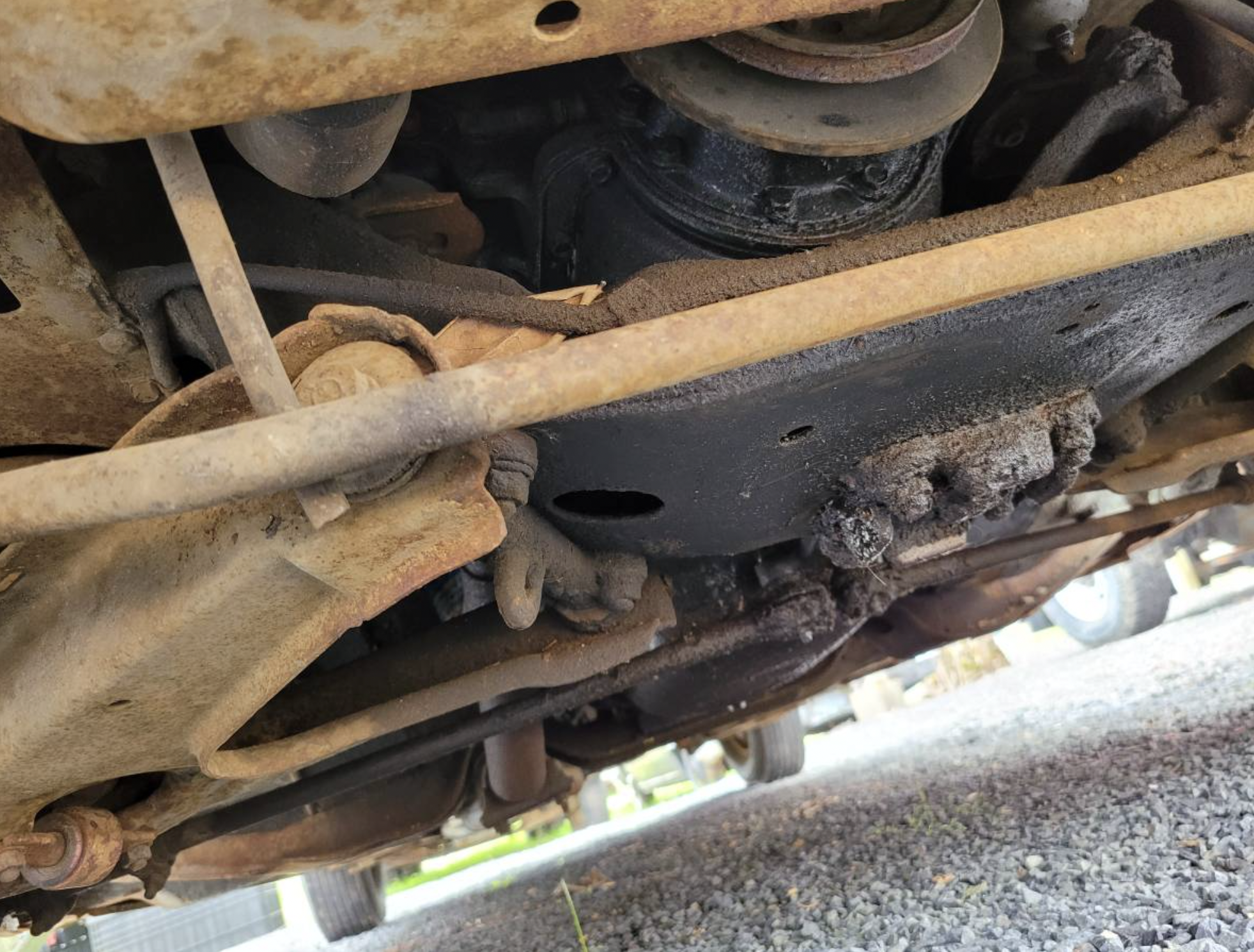 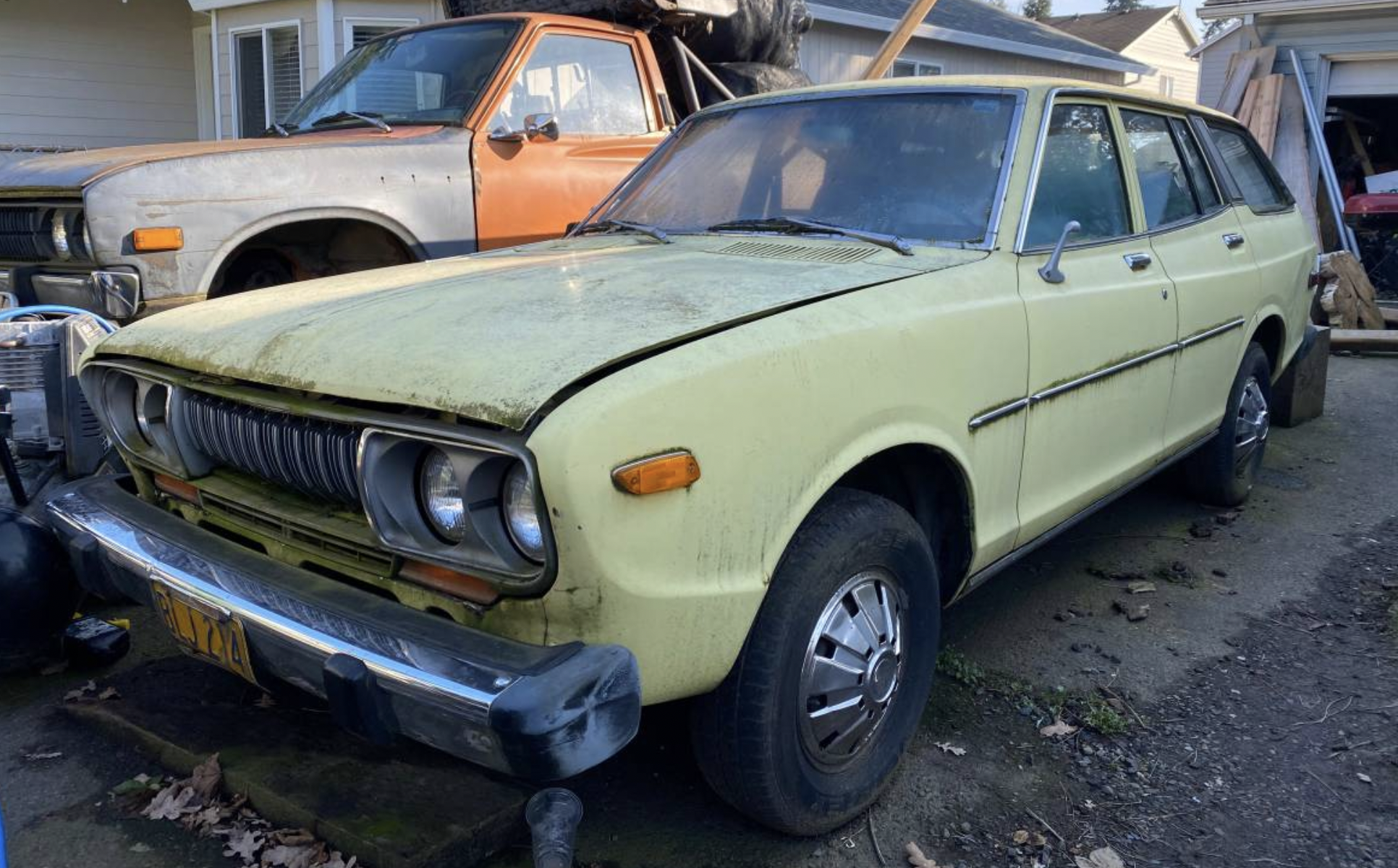 Fast-forward 14 years, and things didn’t seem so cool. High gas prices, economic hangover from a long drawn-out war, inflation, and disco all conspired to suck all that Jet Age optimism right out of America by the time its two-hundredth birthday rolled around. Japanese imports had already been around for years, but it wasn’t until after the OPEC embargo in 1973 and the resulting gas crunch that “foreign” cars started to really catch on in the heartland, as the Red Formans of the country found out just how efficient and reliable they really were. 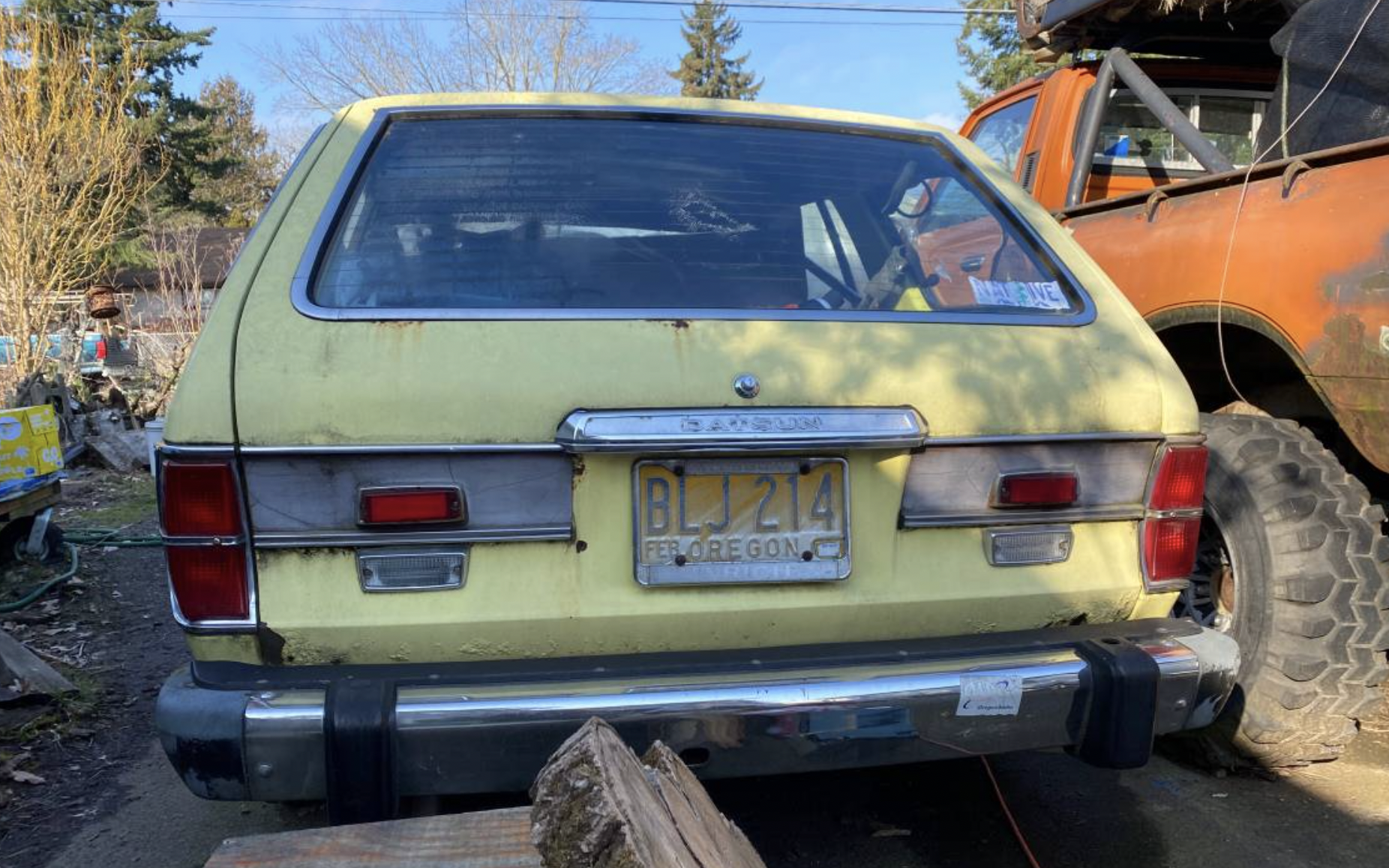 This yellow Datsun was one of those cars, falling somewhere in the middle of Nissan’s confusing U.S. lineup. The 710 replaced the legendary 510, but so did the 610, and it was slightly larger. Then the 510 came back, and the 810 replaced both the 610 and the 710. (I think I have that right). And there were also a 210, a B210, a 310, and an F-10 in there somewhere. Things were so much easier after 1983, when they told everyone “The Name Is Nissan” and dropped the numerical model designations and gave us real names. 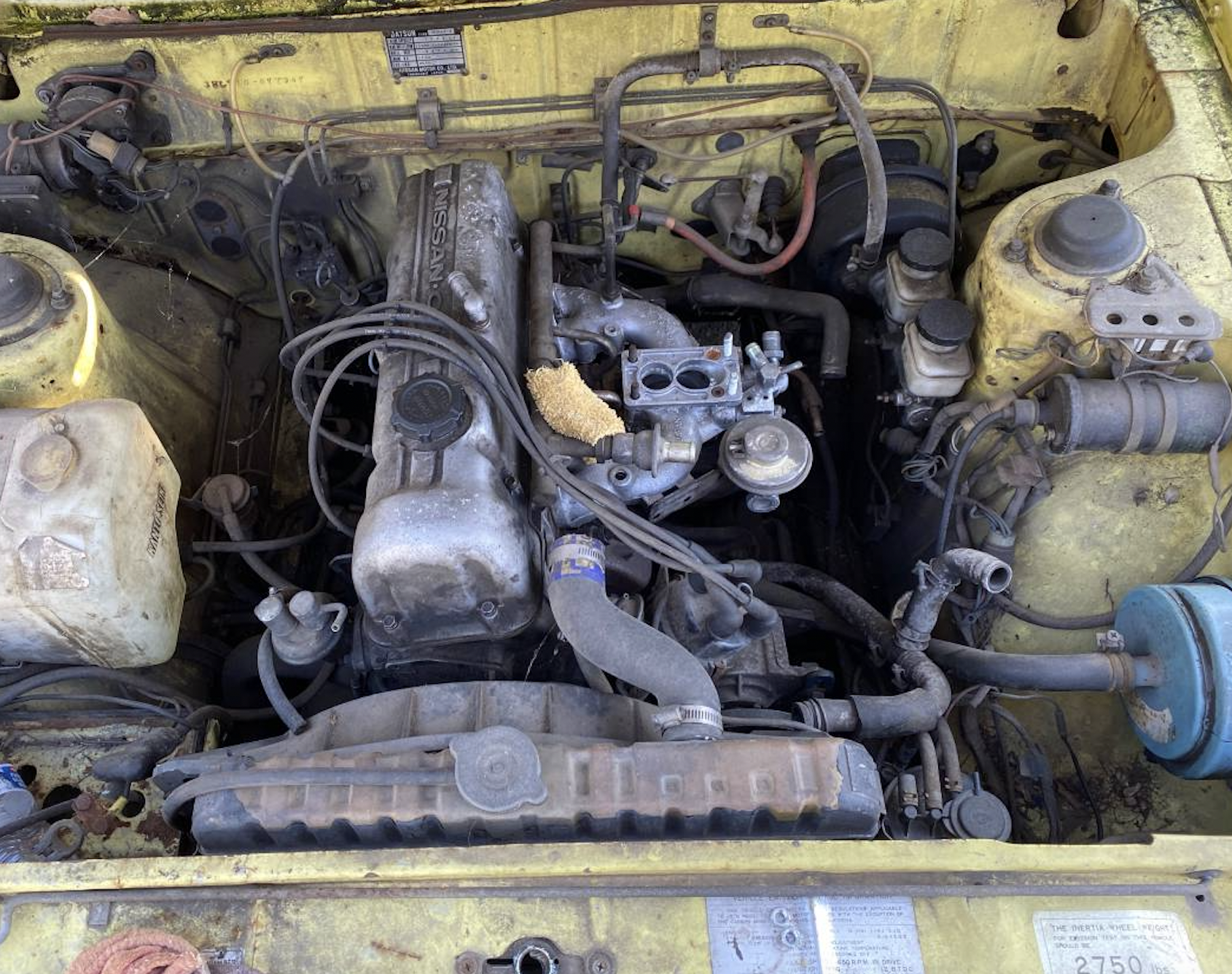 Like the Stude, this car has been sitting for a long time. I’d imagine Seinfeld was still on the air the last time it moved under its own power. But the seller claims it was stored inside, and I believe it: I haven’t seen a ’70s Datsun this rust-free that wasn’t a Z car or a pickup in a very long time. It looks to be all there except one mirror and the carburetor, though without photographic evidence I question the seller’s assertion that the interior is “immaculate”. 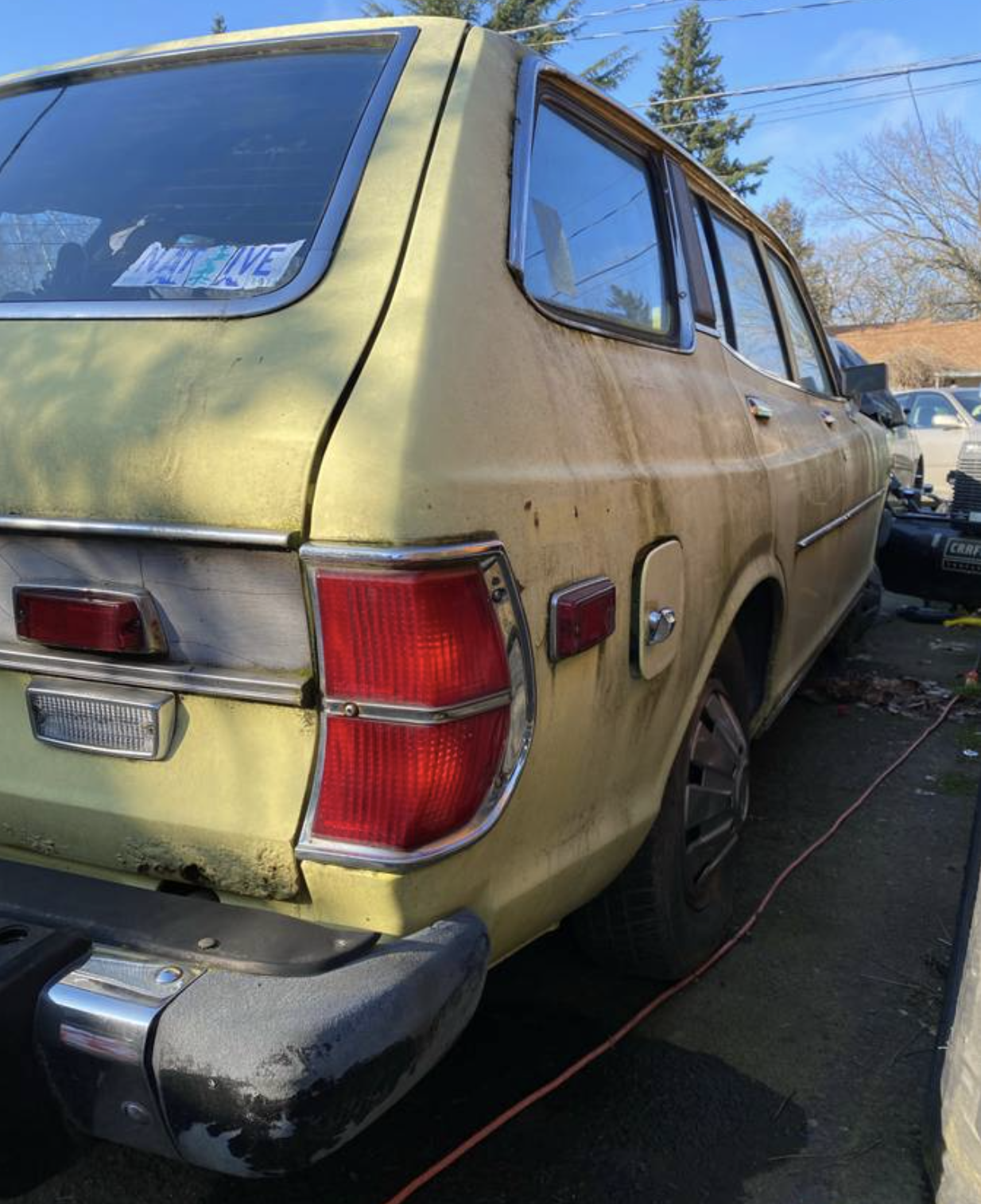 The trouble is that it’s a small, rear-wheel-drive Japanese car, and that means someone is going to want to drift it. I see an engine and transmission swap and a welded diff in its future, almost as if it were written in the stars. I’d prefer it if someone kept it the way it is, or maybe manual-swapped it (yes, the L20 four-cylinder in this wagon is hooked to a three-speed auto), but I don’t see that happening.

And there they are. Two wagons, from different eras: one last gasp of the coolest car company of its day, and one soldier in the vanguard of the conquering force, ready to take on American iron. Which wagon would you bring back to life?