Half Of All New 2023 Ford Escapes Will Be ST-Line Models And You Can Thank The Ford Bronco Sport For That. Here’s Why

The refreshed 2023 Ford Escape is absolutely not an off-roader. It is meant to stay on the streets. It can haul cargo, sure, but it better be stuff like boxes for your business or hockey sticks for your kids — not firewood or tents or other outdoorsy stuff. It gets great fuel economy and has lots of cool tech inside; it’s not a place to drag your muddy boots. The exterior looks sporty; it does not look tough. This is all to say: The new Ford Escape is not a Ford Bronco Sport. At least, that’s what Ford wants the world to believe, and it totally makes sense why. Here’s a look at the fresh new Ford mid-size crossover, and why Ford expects half of all Escapes to be “ST-Line” models.

Ford is in an interesting position within the compact crossover space. The company has a wildly-successful Bronco Sport, but the Baby Bronco is stealing some sales from its platform-mate — the segment’s old-timer, the Ford Escape. With small SUVs currently the hottest class in the car industry right now, Ford knows there’s space for two vehicles. The ticket to maximizing Ford sales is to minimize how much the two vehicles cannibalize one another, which is why when Ford debuted the very first Escape redesign since the 4×4-oriented Bronco Sport debuted back in 2021, The Blue Oval made sure to push the Escape farther towards “sporty, city-oriented car” than perhaps ever before. 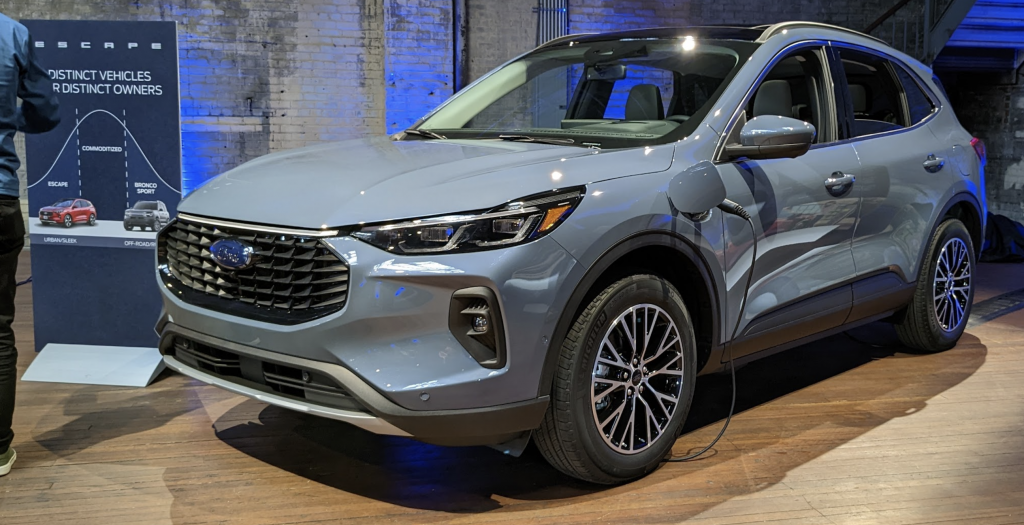 To the left of the new plug-in hybrid Escape Ford showed journalists in an old brick building on the east side of Detroit, you’ll see a sign that says “Distinct Vehicles for Distinct Owners,” with the Escape having “urban/sleek” under it and the Bronco Sport sitting on “off-road/rugged.” That pretty much sums up what Ford focused on during that debut, and it’s what the company focuses on its press materials for the new Escape.

Brand manager Adrienne Zaski told me that the Bronco Sport has “certainly taken some Escape customers,” but it has added to Ford’s overall share of the segment. “We really tried to up the volume on the style and technology,” she told me, saying “I think this redesign will do that particularly well with the ST-Line.” That ST-Line, by the way, is all over Ford’s press release for the new Escape — a release titled “New Ford Escape with Advanced Hybrid Engines and a Sporty ST-Line Is More Stylish and Smarter Than Ever.” The package, available with three of the four powertrain options (not the plug-in hybrid — we’ll cover the powertrains in a bit), is expected to represent 50 percent of all Escape sales, and will cost $995 over similarly-equipped Escapes. Ford describes this sporty appearance package in its press release, writing:

The ST-Line models stand apart from the crowd with a series-specific black mesh grille, unique rear skid plate and a large single-wing rear spoiler. Every surface is monochromatically painted down to the moldings for a dynamic, refined appearance. The well-equipped ST-Line Elite model includes an available eye-catching “coast-to-coast” LED light bar that stretches from headlamp to headlamp for a distinctive addition 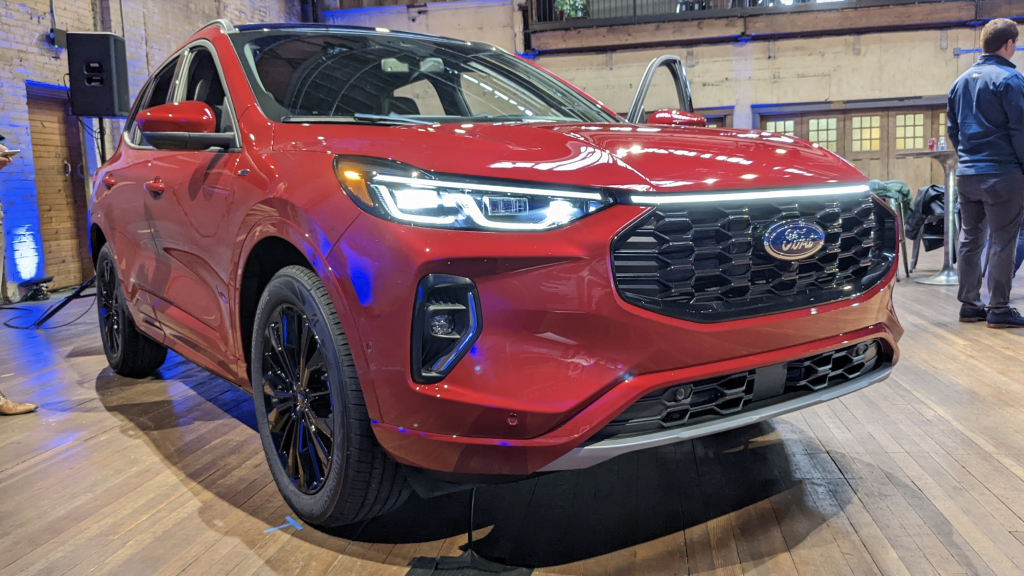 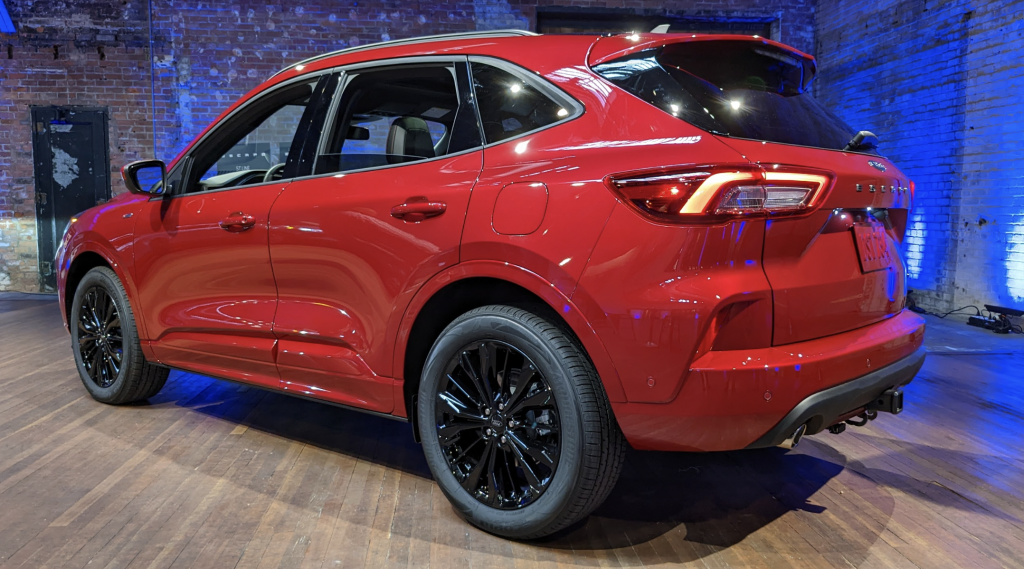 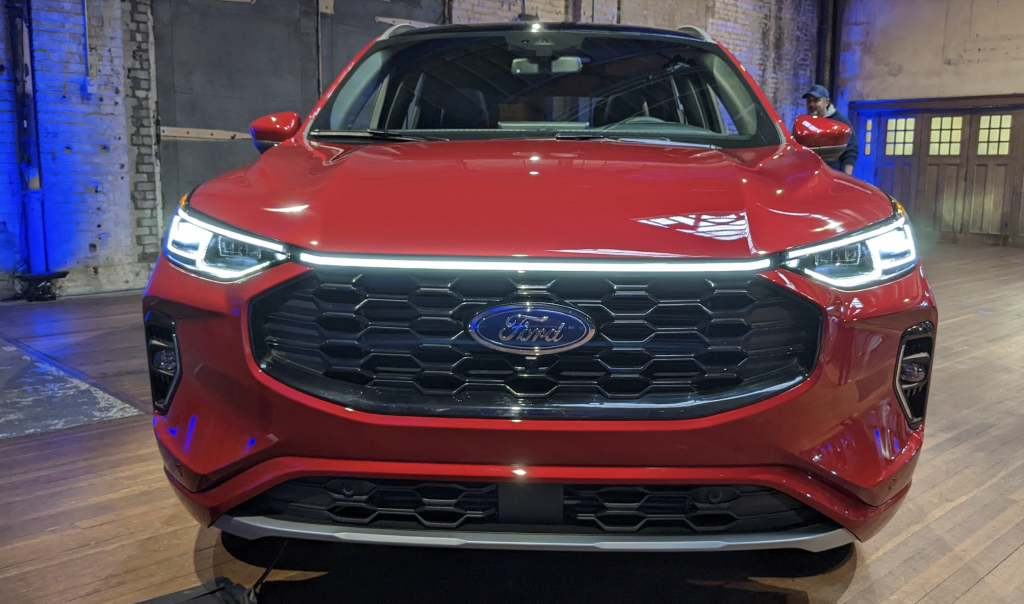 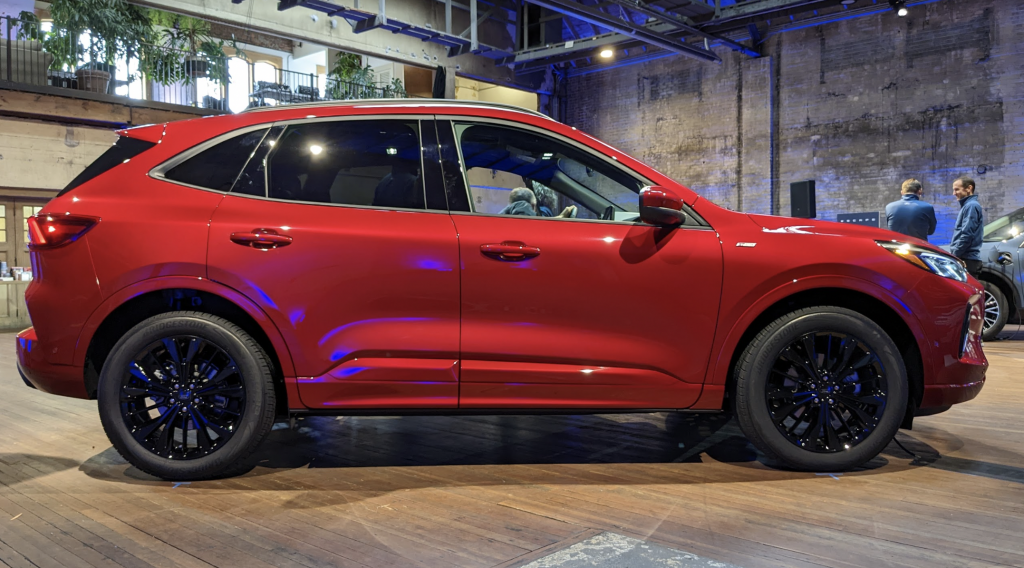 Ford’s debut began with an introduction to its flexible architecture, noting that the other platform-mate, the Maverick is meant to handle cargo, the Bronco Sport is for off-road adventuring, and the Escape is a city car “Rather than trying to be all things to all people,” as SUV marketing boss Craig Patterson put it. This is an interesting way to put things, and a bit different from what I’m used to hearing from makers of SUVs, but now that Ford has multiple entrants in a segment, pushing a single vehicle as the master-of-everything machine is maybe less advantageous than having each car stay in its own lane.

On multiple occasions, Ford mentioned that the car has “premium European styling both inside and out.” Here’s a short clip of Ford’s European design director Amko Leenarts pointing out some new styling elements:

Much of the Escape’s nose is new, including the hood and front fascia, which contains new standard LED headlamps. The cool horizontal LED light bar (which is optional) up front is there to help give the car stance, and make it feel lower and wider. 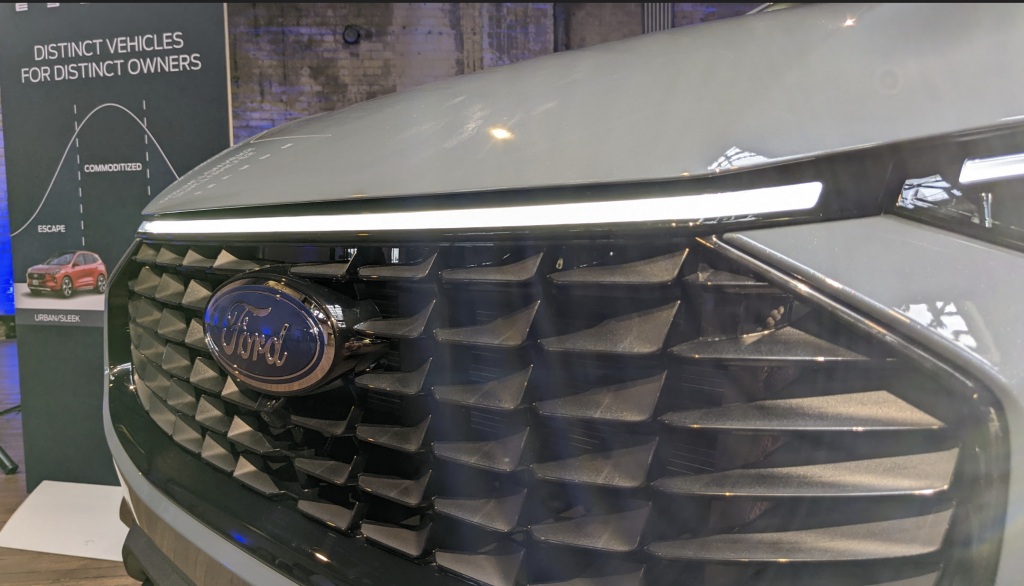 Also aiding on that front are the fog lamps in the bumper, which are positioned low and wide. Leenarts also mentioned the “agile” sculpture in the hood, plus the new taillights. “The more we could push it away from Bronco Sport, the better it is,” he told me, saying folks in Europe used to driving smaller cars have been especially interested in the Escape. 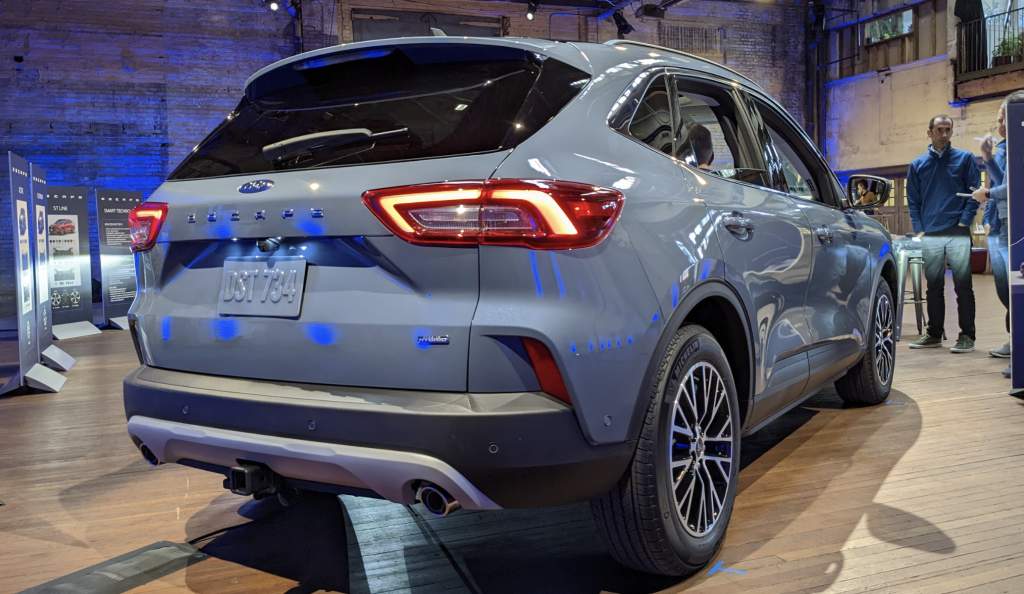 The three other areas that Ford stressed besides sporty styling, particularly of the ST-Line expected to make up half of all sales, are: Infotainment, safety, and fuel economy. On the infotainment front, let’s take a look inside the cabin: 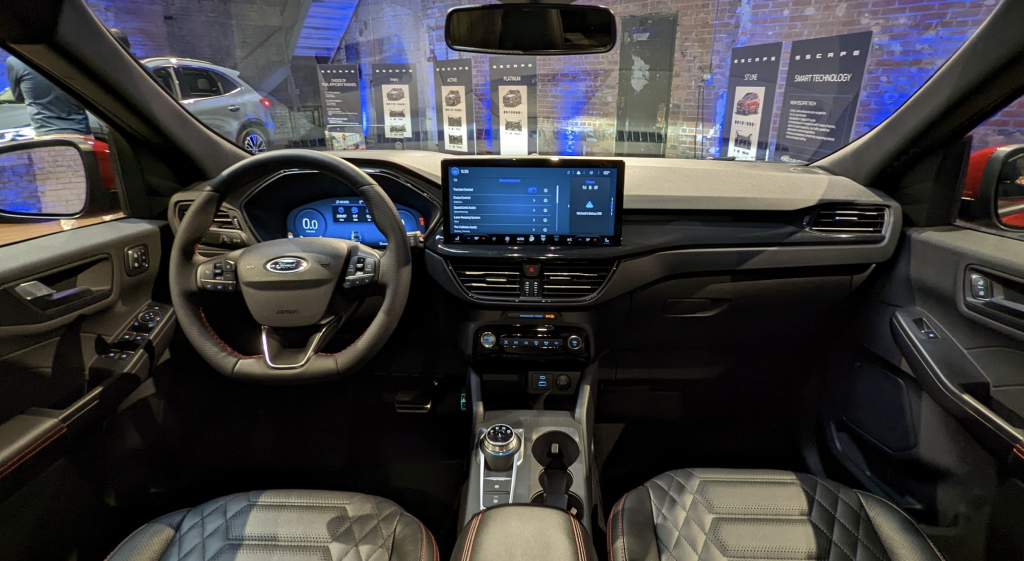 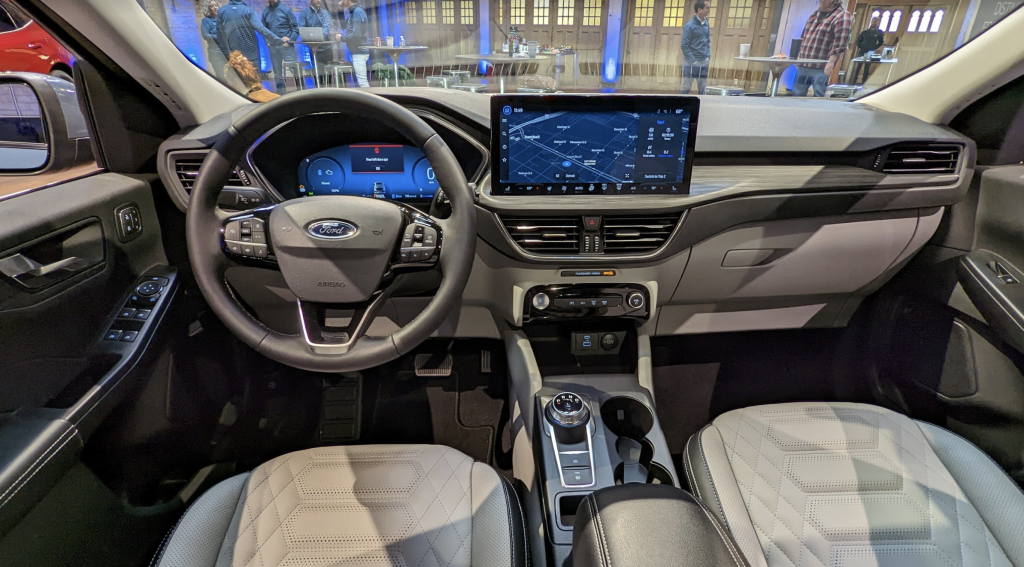 And let’s compare that to the outgoing car’s interior: 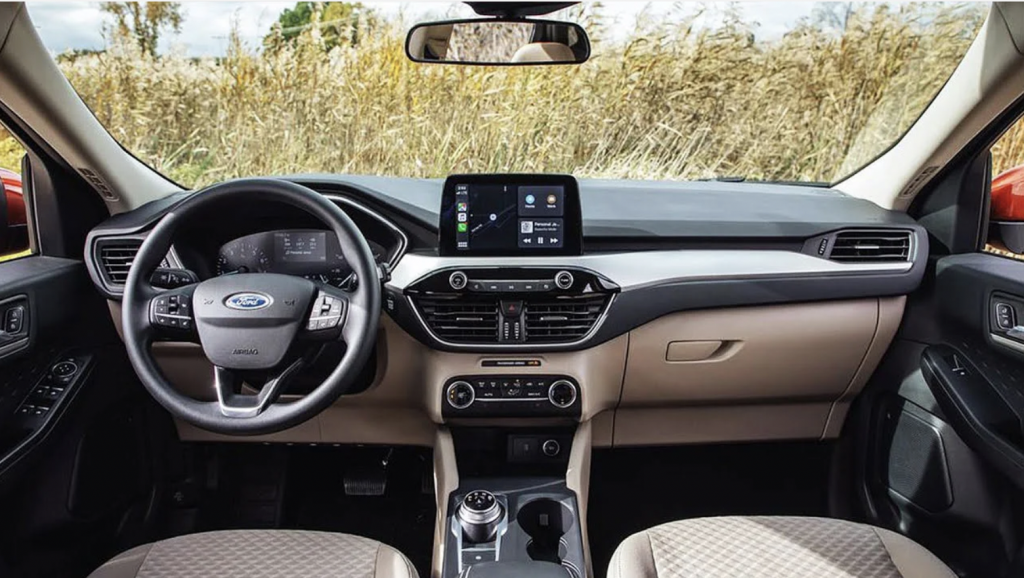 Obviously, the 2023 Escape’s cabin isn’t all-new. Much of the dash is the same, as is the steering wheel and center stack below those AC vents. But there is a new main screen there in the center — an available 13.2-inch unit to go along with the standard 8-incher. And the gauge cluster is revised as well (a 12.3-inch one is optional; eight inches is standard). Ford breaks it down, while noting various safety features that a sensible city-dweller might find important: 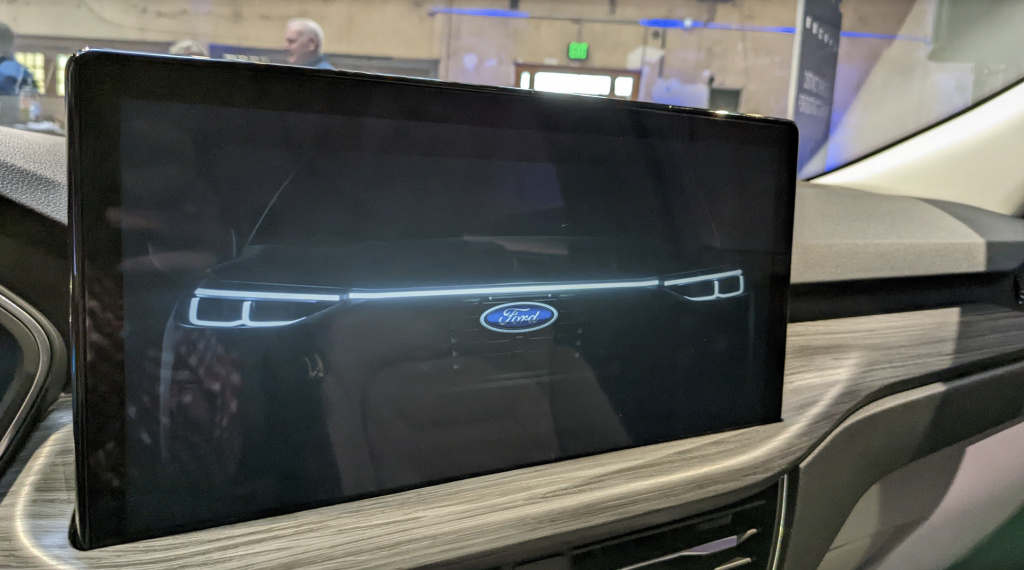 Wireless Apple CarPlay and Android Auto are obviously big deals, which is why Sazki mentions them here while discussing “everyday adventures” like meetings and coffee runs — not to be confused with less-than-everyday adventures (which you should be having in your Ford Bronco Sport):

“The new Escape is the perfect getaway vehicle,” said brand manager Adrienne Zaski. “From large touchscreens that can wirelessly display Apple CarPlay and Android Auto while your phone stays in your pocket to a sliding second row that offers more legroom, it makes everyday adventures easy to handle – from meetings on the fly, to coffee runs with friends, or even a power nap in the back seat

Escape customers have been waiting for SYNC 4 infotainment software, and it is now here:

The new Escape is also smart and connected with SYNC 4 providing cloud-connected navigation and integrating standard wireless Apple CarPlay software feature and Android Auto smart driving capability for fast, easy connectivity. The cloud connectivity combines SYNC 4 with available Enhanced Voice Recognition with the power of internet-based search results so drivers and passengers have access to the latest information with almost every request – from close restaurants to nearby charging stations.

One thing I’d like to note: If you look at the outgoing model’s interior, just to the bottom right of the left knob below the vents in the center stack, you’ll see a mechanical switch for the heated seats. That’s good. You get into the car, fire it up, and bash that button until your arse [Editor’s Note: I prefer the American spelling of “ass” but okay, David, you did just spend a month in a commonwealth country,  after all – JT] is warm. On lower-trim versions of the new Escape, that excellent setup remains, though if you go for the big screen — unless I missed something — it appears that you have to go through the infotainment screen to fire up those seat heaters. Here’s a little clip I took of the process:

Seems a bit like a step backwards from a usability standpoint, even though I’m fairly certain the car will memorize your last seat-heater setting, and even though the big screen does look damn good. Honestly, the whole cabin is quite nice. 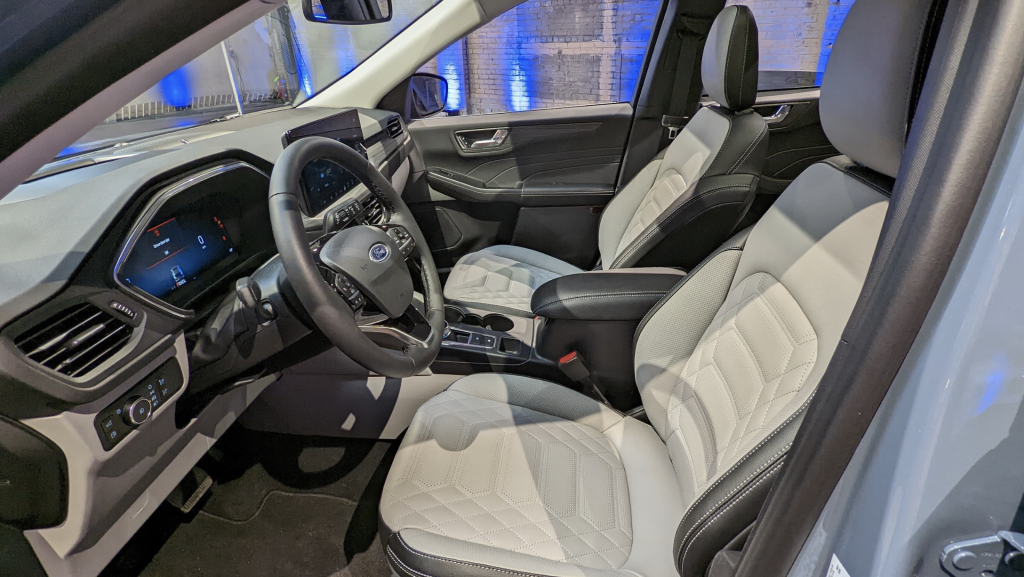 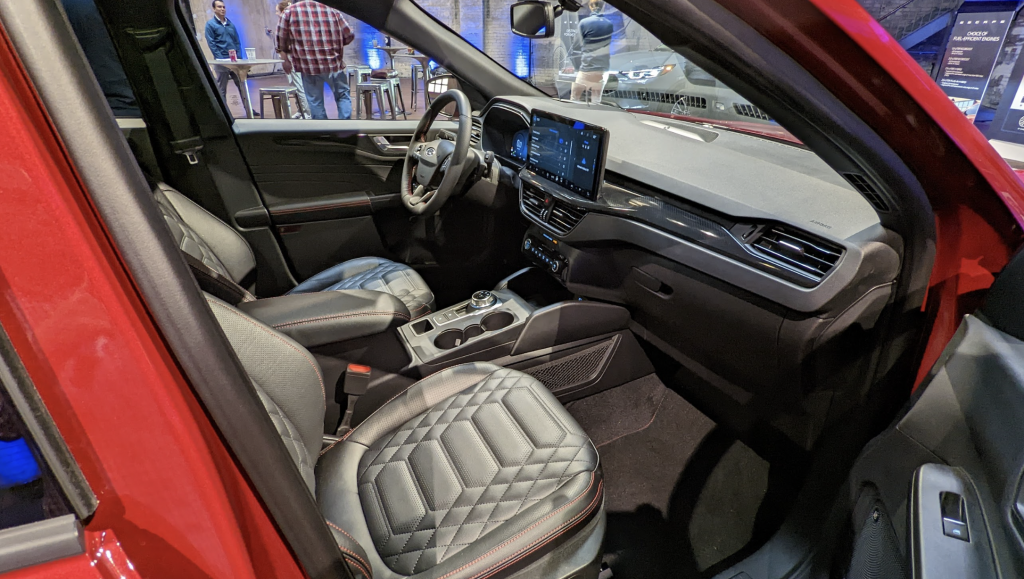 Powertrain wise, there are four options. There’s a 1.5-liter Ecoboost engine making 181 horsepower and 184 lb-ft of torque; there’s a 250 horsepower, 280 lb-ft 2.0-liter Ecoboost; and there are two hybrids. The 2.5-liter Atkinson hybrid making a “targeted” 199 horsepower and offering an estimated range of over 550 miles in front-wheel drive trim; then there’s that 2.5-liter engine in plug-in hybrid form making a targeted 210 horsepower with an estimated EV-only range of 37 miles.

Anyway, these engine options should all look familiar; here’s a look at the official fuel economy numbers for the outgoing 2022 model — they’re quite good: 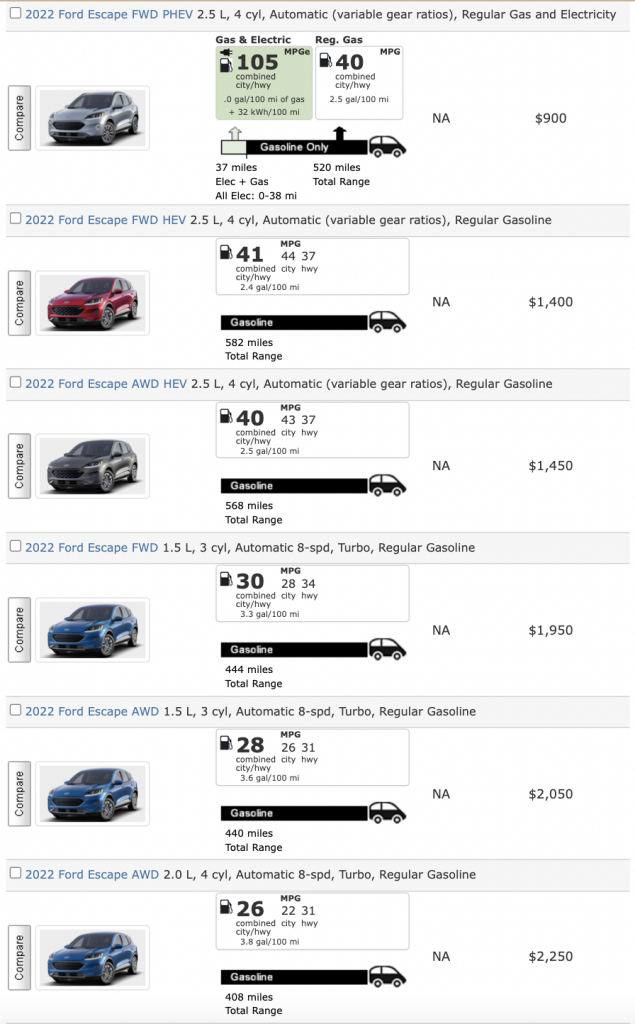 As for trims, you’ve got Base, Active, Platinum, and Plug-In Hybrid. In addition, there’s ST-Line, ST-Line Select, and ST-Line Elite. The base ST-Line is a $995 upgrade to the Active model, and the ST-Line Elite takes the Platinum and gives it a bit more “sportiness,” also for $995. The Select is somewhere in between. Here’s a full look at pricing:

Ford’s configurator is up and running, and the company is taking orders now. It’s betting on most of you going for the ST-Line Escape.

Personally, I do think the Escape is sufficiently distinct from the Bronco Sport, which gets markedly worse fuel economy. In fact, that was one of my main points when I reviewed the Bronco Sport a couple years ago:

It’s a similar story with the 2.0-liter. The all-wheel drive Escape scores 23/31/ 26 city/highway/combined; the Bronco Sport manages 21/26/23. That’s a huge drop, and if you’re not going to use the Bronco Sport’s off-road chops, I don’t see how that could possibly be worth it.

But of course, people don’t buy cars for logical reasons. I’ll guess that many will be willing to spend more on fuel solely to get the Bronco Sport’s more rugged looks.

I think the Escape has plenty to offer that the Bronco Sport doesn’t, but Ford pushing the two apart via styling, equipment, and marketing still makes plenty of sense.

Rust-loving Jeep man, cofounder and EIC of The Autopian, Jason's friend. Email: david@autopian.com
Read All My Posts »
PrevPreviousToyota’s Allegedly Stopped Developing The One Toyota We Are Super Excited About
NextCheck Out This Instagram Account That Uses AI To Create Some Of The Coolest Cars That Don’t ExistNext