Welcome back! On today’s exciting episode, we’re taking a look at a couple of cheap old cargo vans. But before we get to those, we need to finish up with yesterday’s five-doors:

I am completely unsurprised. As I mentioned in the comments, the Aveo was a last-minute substitution; the car I wanted in there was a 2006 Scion xB, but it sold sometime in the three hours between finding the ad and writing yesterday’s edition. It happens. I suspect the xB might not have had its ass quite so thoroughly handed to it as that Aveo did.

Anyway, let’s talk about vans. Who doesn’t like vans? (Put your hand down; it was a rhetorical question. And see me after class.) These big boxes are essentially blank canvases, sometimes literally, which an owner can modify to suit their needs. Need a work van? Install some shelves, toolboxes, and a ladder rack, and you’re all set. Want to take the family cross-country? Go full conversion-van and fill it with captain’s chairs and a TV. Have a ’70s fetish? Your wildest dreams are only some shag carpet and a disco ball away.

These two vans could be any of those things, and so much more. All it takes is some imagination and a ton of hard work. Which one is the better starting point? Let’s take a look and see. 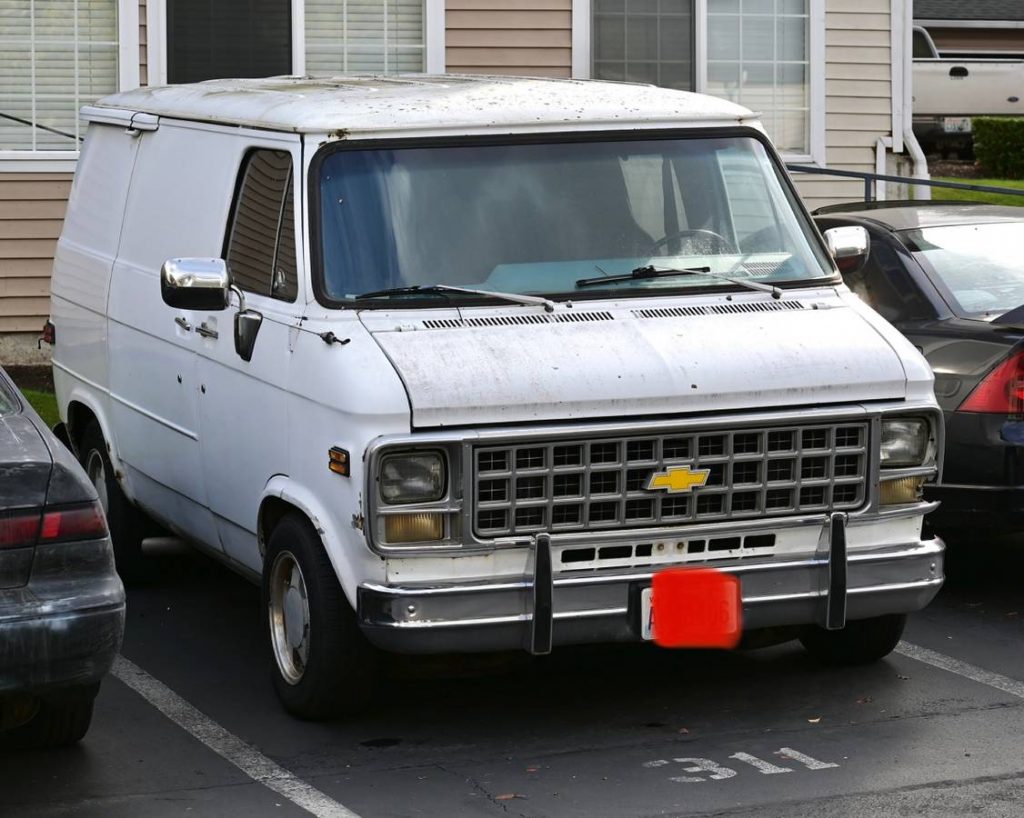 Runs/drives? Runs great, according to the seller

This style of Chevy/GMC’s G-series vans were produced for a full quarter of a century, from 1971 to 1996. They’ve been cargo vans, conversion vans, U-Haul trucks, RVs; you name it, these vans have done it. They’ve been immortalized in song. They’ve helped plans come together. It’s a hell of a resume, to be sure. 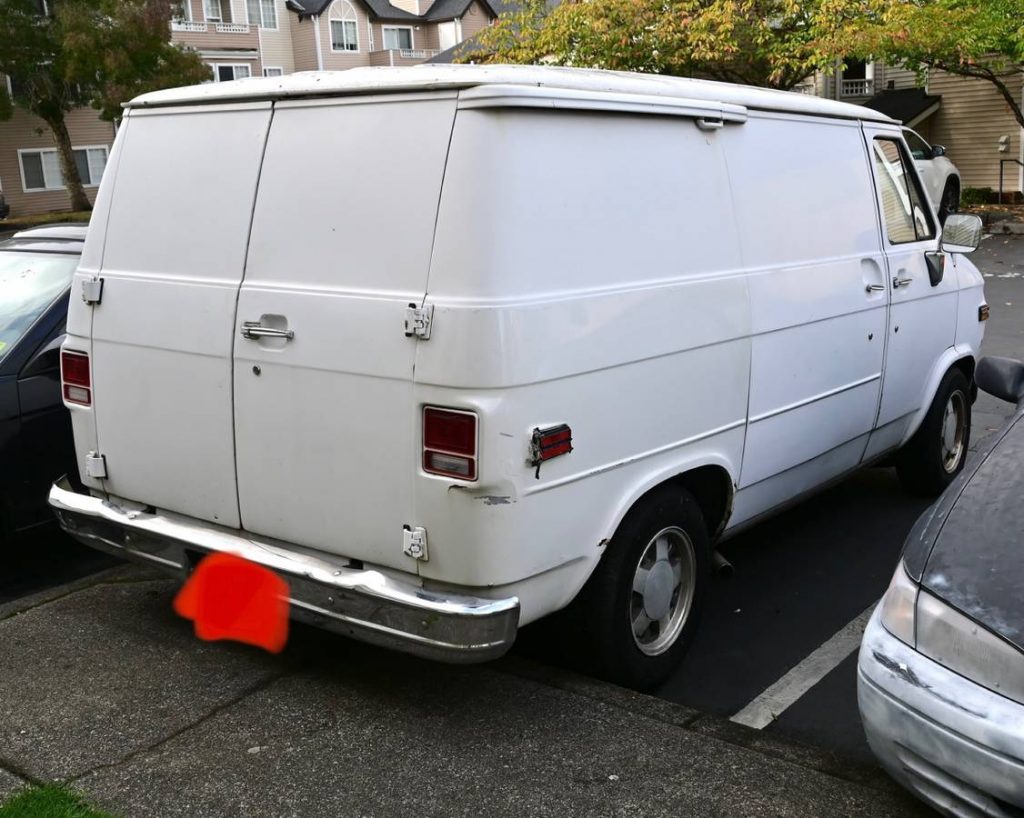 This old Chevy van, though it hasn’t traveled many miles, has seen some things as well. The seller says it used to be owned by a race mechanic, which might explain its engine swap. The original build tag is shown in the ad, and it lists this van’s powertrain as a 250 cubic inch inline six and a three-speed manual. Now, however, it is an automatic, and is powered by what is clearly a small-block V8. My guess is that it’s the ubiquitous 350, along with a TH350 or TH400 transmission: cheap, widely available, and as simple and durable as an anvil. 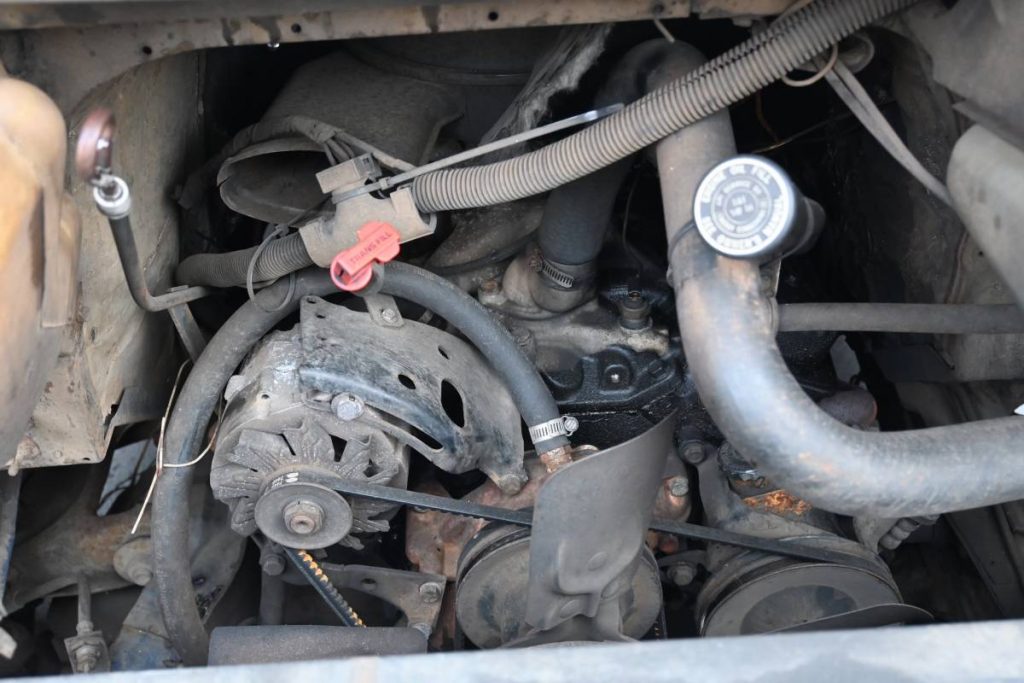 Why the swap? Probably just boredom and a desire for more power. Racers can’t leave anything well enough alone, even when it comes to utilitarian vehicles, and the V8 probably was simply in the wrong place at the wrong time and got mixed up in this whole thing. 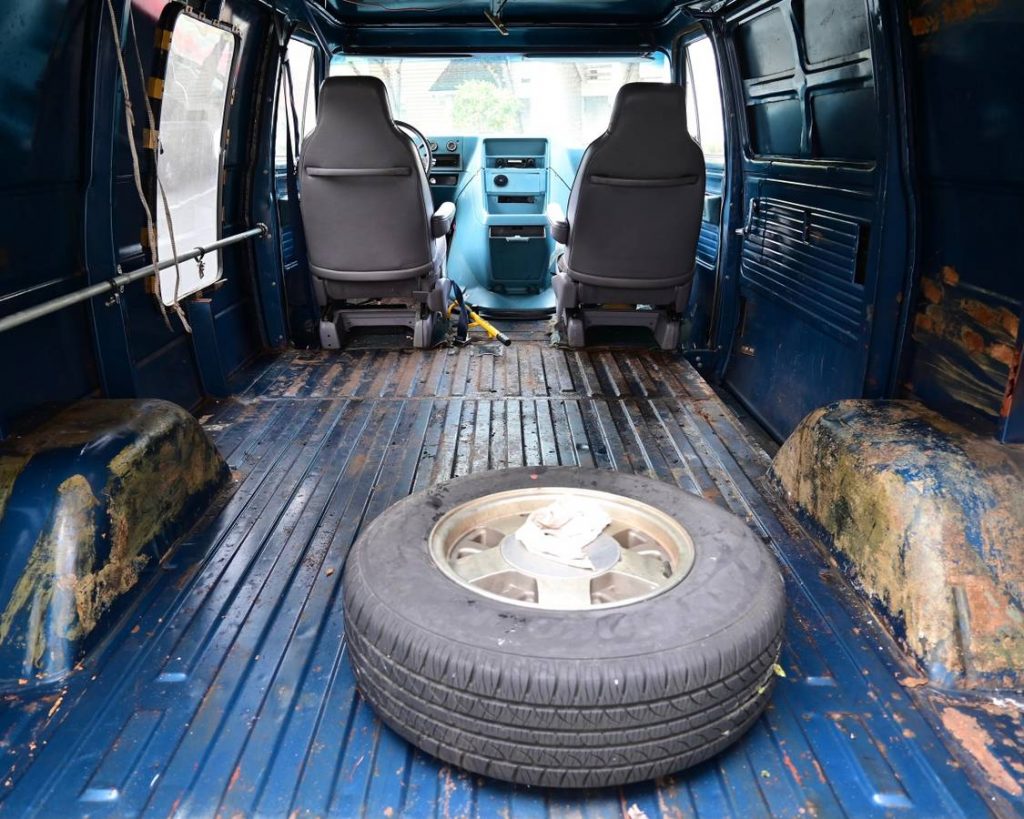 Inside it’s just bare painted steel and a dashboard, and what look like Plymouth Voyager seats. There’s a picture window in one side, but no other modifications. Do with it what you will. 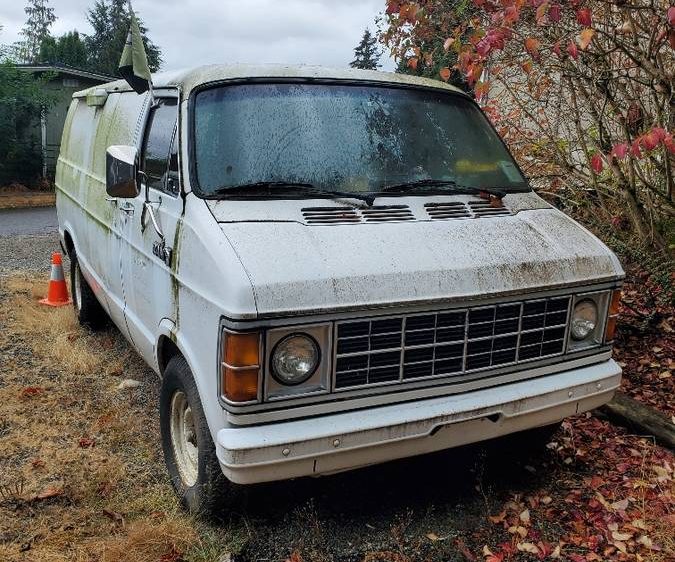 Runs/drives? “Been sitting a while but starts right up”

Dodge’s B-series van lasted even longer, from 1970 to 2003, though with a few sheetmetal changes. This example is the 1978-93 style, known neither for RV conversions and custom jobs like the early style, nor the unexpected “Dajiban” racing craze in Japan like the later style. This one was driven by plumbers and electricians, or crammed full of enough seats to haul a dozen or more kids to a church retreat. 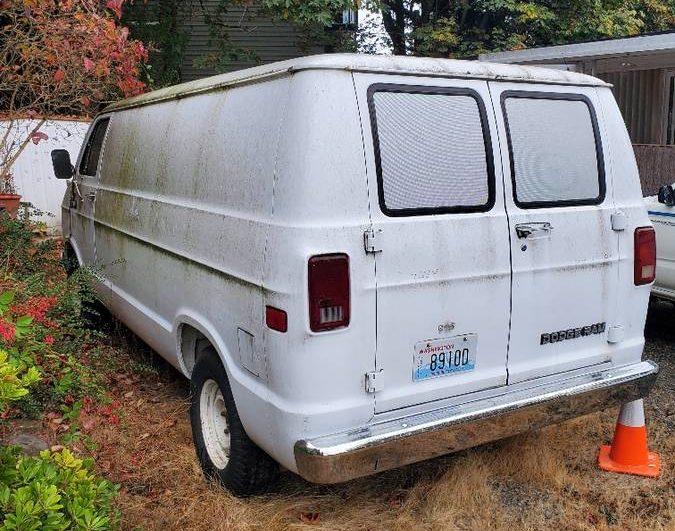 This particular van seems, from the tag on the door sill, to have come from some government agency or other. It’s claimed to have only 38,000 original miles, and that might be accurate; I know fleet vehicles sometimes have weirdly low miles. Usually this means it sat idling for long periods of time, or making a bunch of short trips. 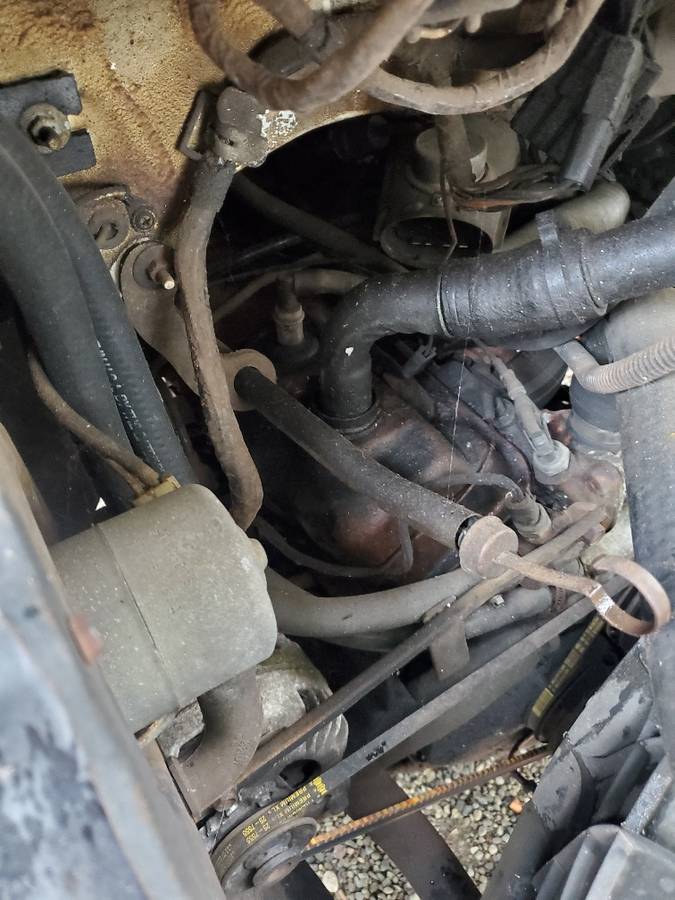 For such use, you don’t need a lot of power, and this van makes do with Chrysler’s legendary 225 cubic inch Slant Six. It ain’t much in the horsepower department, but it will run until the end of time, and not put much of a strain on the Torqueflite automatic transmission. This van has been sitting a while, but the seller says it starts right up; presumably this means they have been starting it periodically. 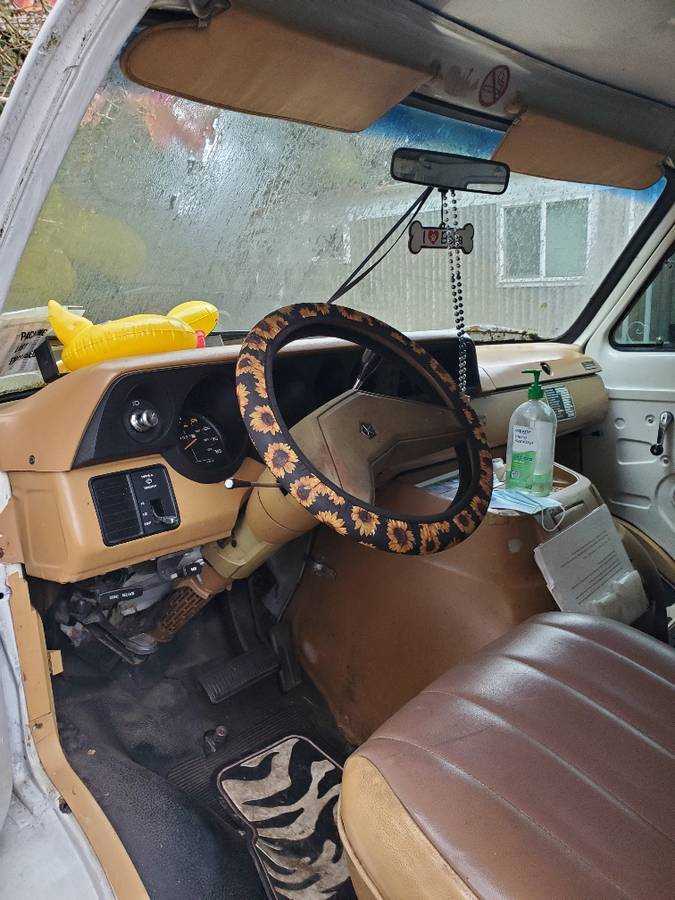 Inside, it’s strictly fleet-spec, with vinyl seats and rubber floors. What looks like a big pile of junk in the back is allegedly the start of a home-brew RV setup, including paneling, insulation, and rooftop solar panels.

Yes, I know – both of these vans, as they sit, look like they should have “FREE CANDY” scrawled on the side. But if you use a little imagination, and put in a little elbow grease, there are lots of directions you could go with these. Which one will it be?