On The Monsterization Of Cars: Cold Start

Last night when I was doing homework with my kid, for his Language Arts class they were studying some sort of narrative structure stuff, and as an example the teacher broke down the plot and structure of a short film, a 2002 Pixar short set in the Monsters, Inc. universe, called Mike’s New Car. The short is about the small cyclopean monster Mike’s purchase of a new six-wheel-drive sports car, and the difficulties in learning to operate its many, many controls. The reason I wanted to write about it is from the picture up top there, a sight gag of the absurdly complex dashboard.

Here, you can watch it yourself:

I really like the sight gag of the complex dashboard, because holy crap is it complicated. Even though the Monsters, Inc. fictional universe uses the same Roman alphabet (and English language) we’re used to, the presumably international-market car relies instead on a library of graphic symbols, which gleefully lives just on the edges of comprehension.

Those 3×3 grids of buttons, of which there’s at least two sets, remind me a bit of buttons on old video mixer boards: 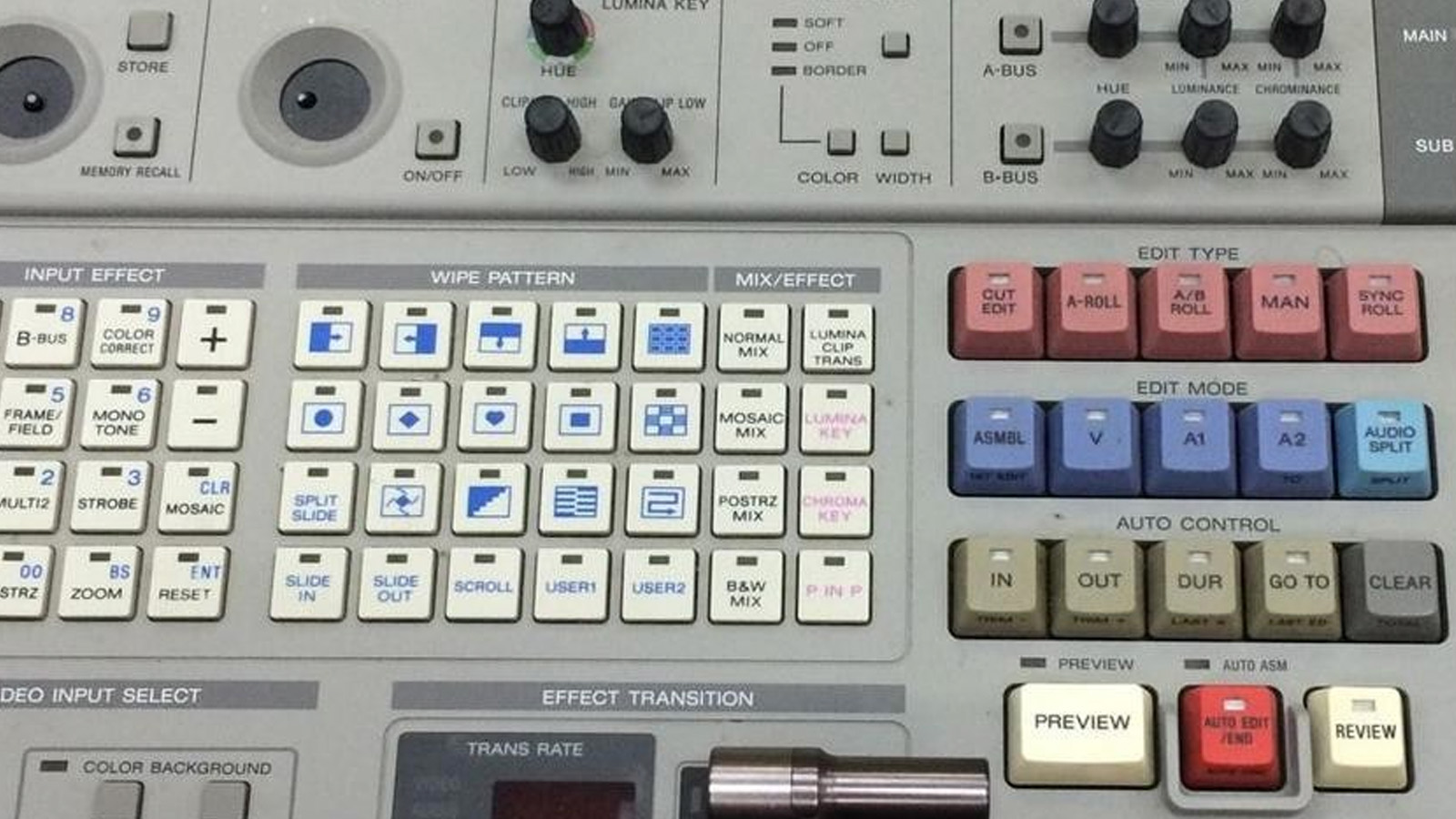 There’s so much good stuff, though: those brass-era-looking paired gauges, that ’80s-looking head unit thing in the center with those equalizer sliders, the huge knobs, the strange keyhole-shaped switches, all of it is so wonderfully bewildering.

It’s worth taking a quick moment to talk about monsterized automotive design, too here. Mike’s car itself is a good example of this: 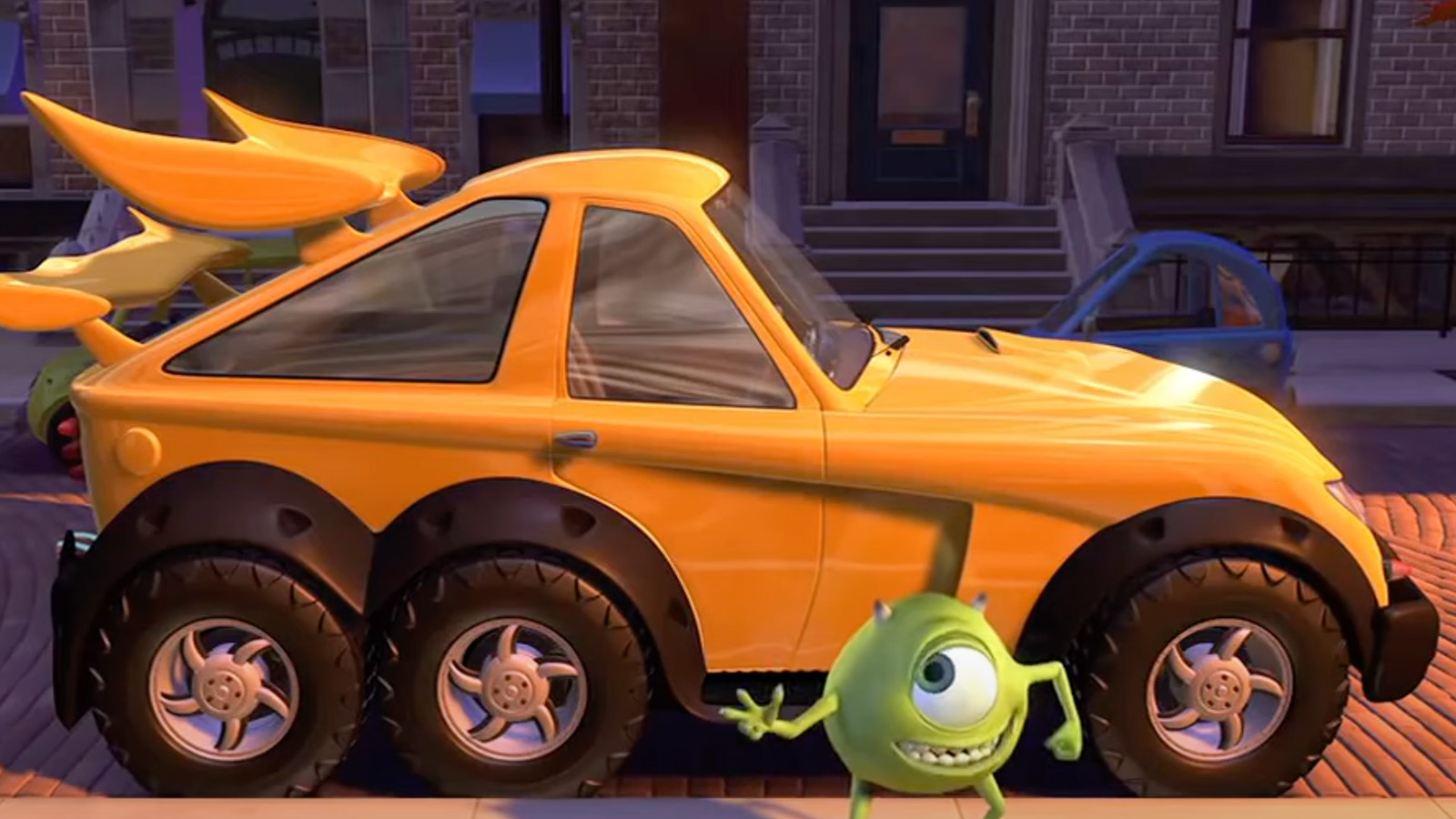 It’s clearly a sports car, but combined with aggressive off-road wheels, six of them, and the wheelarches cut dramatically, even brutally, into the body of the car, where they’re set off by huge black plastic flares. The car has sort-of GT car proportions, a long hood and a short, sloping fastback, complete with a very monstery-looking pair of wings.

The door is significantly impeded by the forward axle’s wheels, the greenhouse height is very exaggerated, and the front “face” of the car is made animalistic and snarling. These are all key monsterization elements.

In the 2013 prequel, Monsters University, there’s a lot of good monsterized car examples, including this wonderful mutated AMC Pacer: 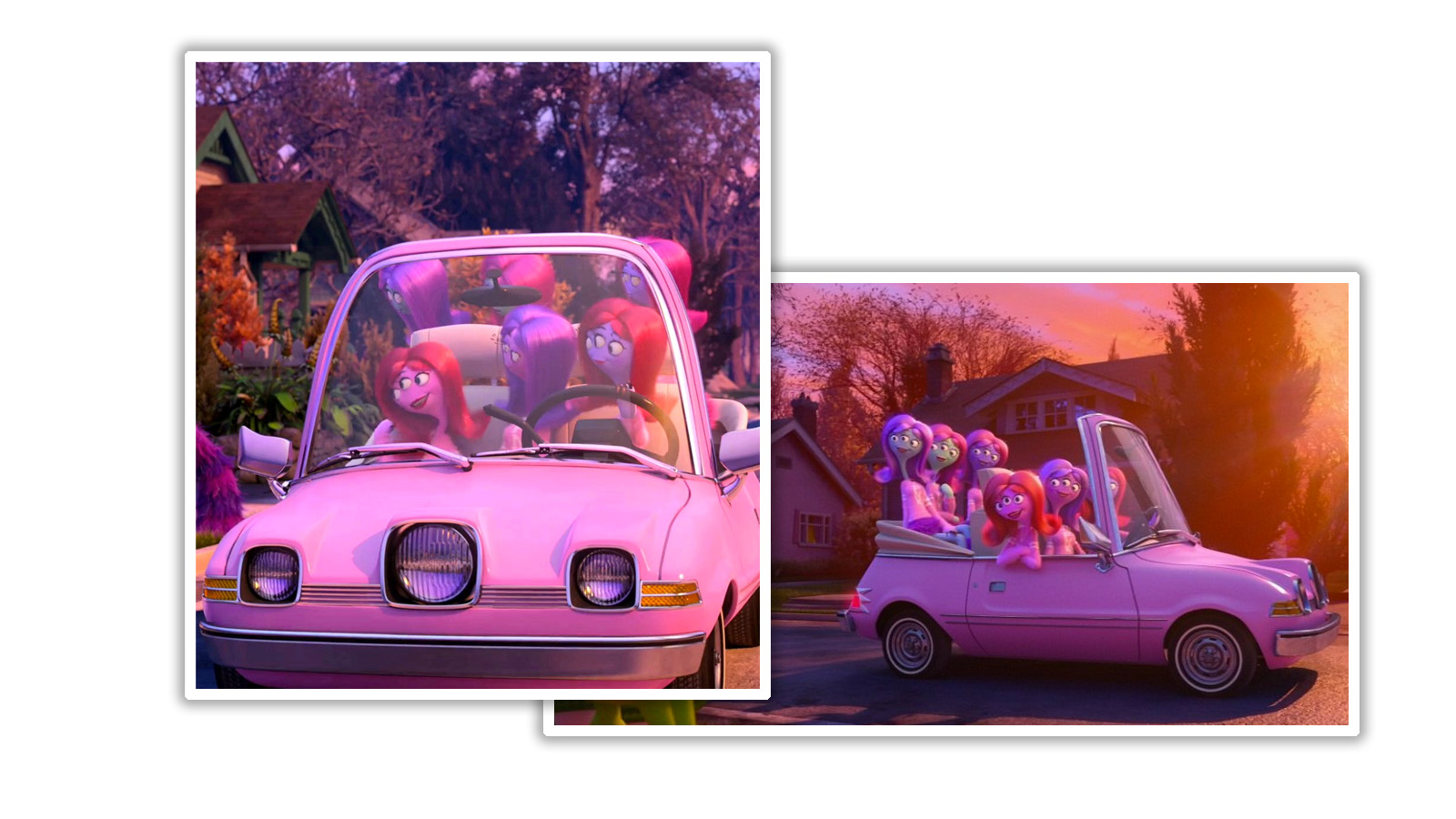 A lot of key monsterization elements are present here: sure, it’s clearly a Pacer, but all of the distinctive traits have been exaggerated, and the car now sports a large, central third headlamp, along with the windshield proportions being made significantly taller. It’s also a convertible, something not especially monsteric but simply an interesting idea, as I think this shows some of the missed potential of a convertible Pacer in our world.

Incredibly, that’s pretty much it: extra light, proportional changes, convertible, but these show the core of monsterizing: add unexpected detail elements to make the car look less symmetrical or expected, and really push and pull those proportions.

Honestly, we could do a whole story just about Pixar’s automotive monsterization methods, and maybe we should, but I just wanted to give a little taste this morning.

I'm a co-founder of the Autopian, the site you're on RIGHT NOW! I'm here to talk to you about taillights until you cry and beg me to stop, which I absolutely will not. Sorry. Hug? Also, David's friend.
Read All My Posts »
PrevPreviousYou Can Buy This Incredible Fiberglass Camper For Just $2,500. Here’s A Look At Some Other Dirt-Cheap RVs
NextCome Along On A Van-Tastic Voyage: 1978 Chevrolet G10 vs 1985 Dodge RamNext