Good morning, and welcome to another week of questionable automotive choices! Today’s choices both have five doors, five forward speeds, and interesting pigments in their paints. But first, let’s see which Euro project you chose on Friday:

Interesting. Personally I would choose the Alfa, though I wouldn’t kick either one out of the garage.

Now then: Let’s take a look at some examples of one of my favorite category of cars: little hatchbacks. For some reason, I tend to favor cars from opposite ends of the size spectrum, either really small or really big. (A few years ago I had a Miata and a Coupe DeVille at the same time, for example). Big cars are cool, but small cars are way easier to live with, and if they have a great big opening in the back, they’re even better. And if they’re manuals and in interesting colors? Better still. 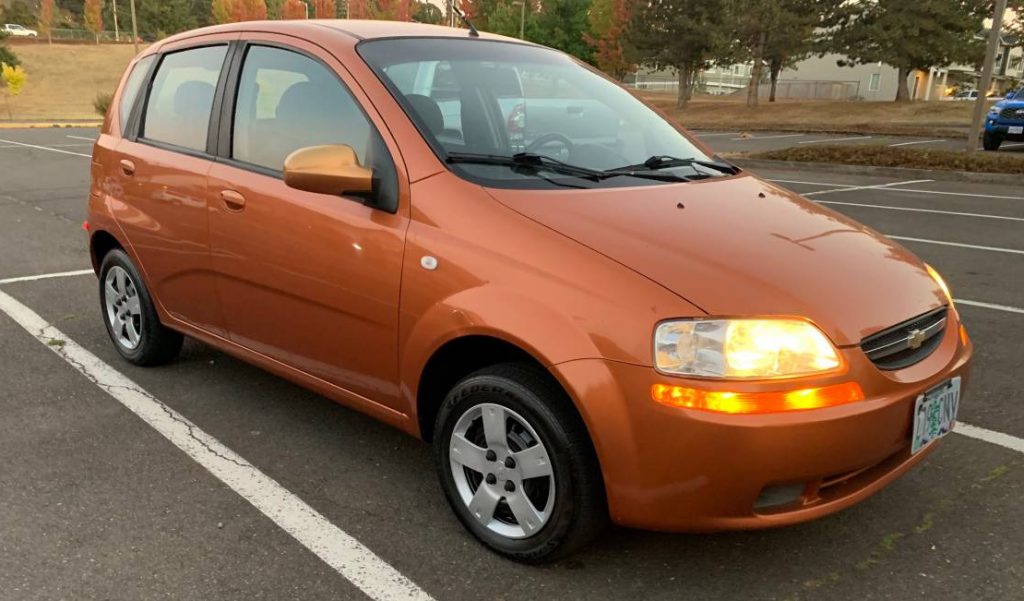 And here we are, looking at another Daewoo, only this one is hiding behind a Chevy bowtie. The Chevy Aveo was known as the Daewoo Kalos in its home country of South Korea. This little car made the rounds, it seems; it was sold all over the world under various names. 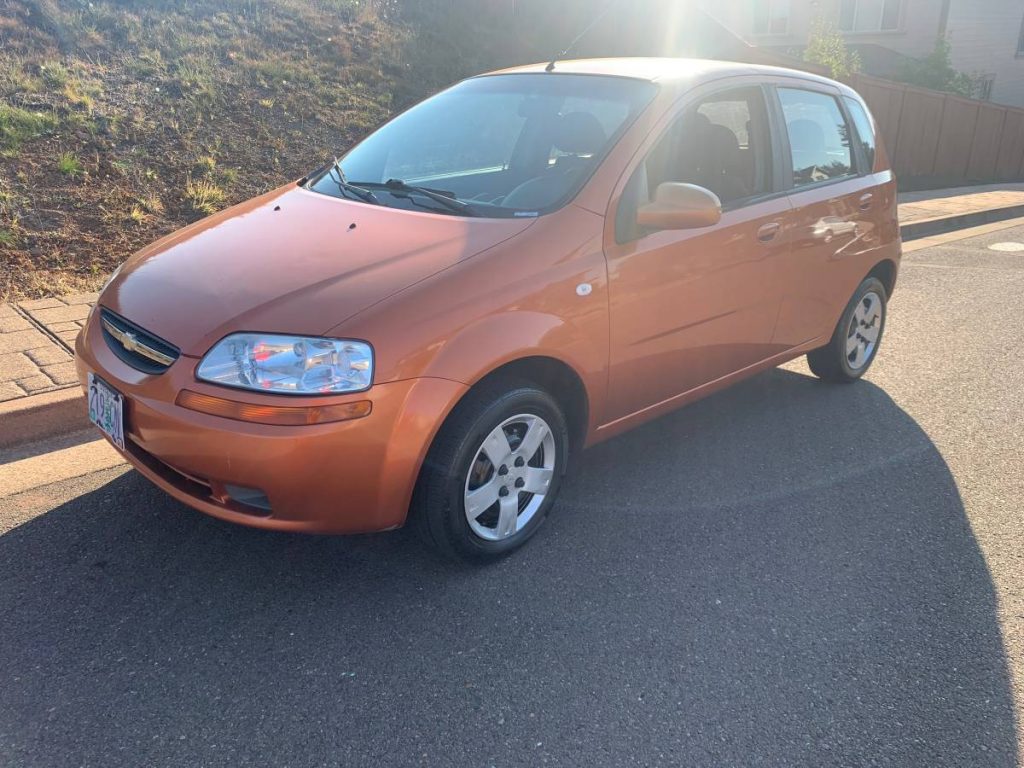 Here in the US, the Aveo was offered only with a 1.6 liter twincam four, and anyone with any sense bought it with a five-speed manual instead of the power- and soul-sucking automatic that was available. Lucky for us, the original buyer of this Aveo had some sense. They also picked a good color: I’ve always liked this bronzey orange color. Someone has gotten their money’s worth out of it already, judging by the odometer. That’s the thing about practical little cars – they get used a lot. 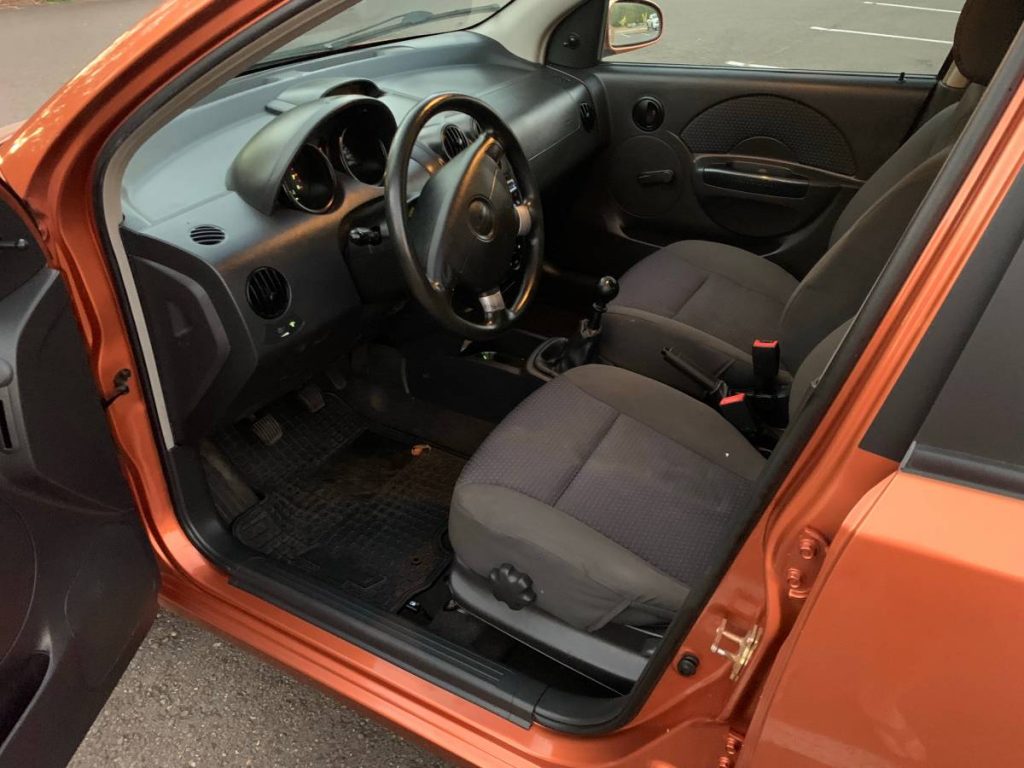 We aren’t given a lot of information about this car’s condition, but from the photos it looks pretty good. There are a few bumps and bruises, and a little discoloration on the inside, but it’s not bad at all. I’d be curious to hear the story behind that dent above the rear quarter window; that’s a strange place for a car to get dented. 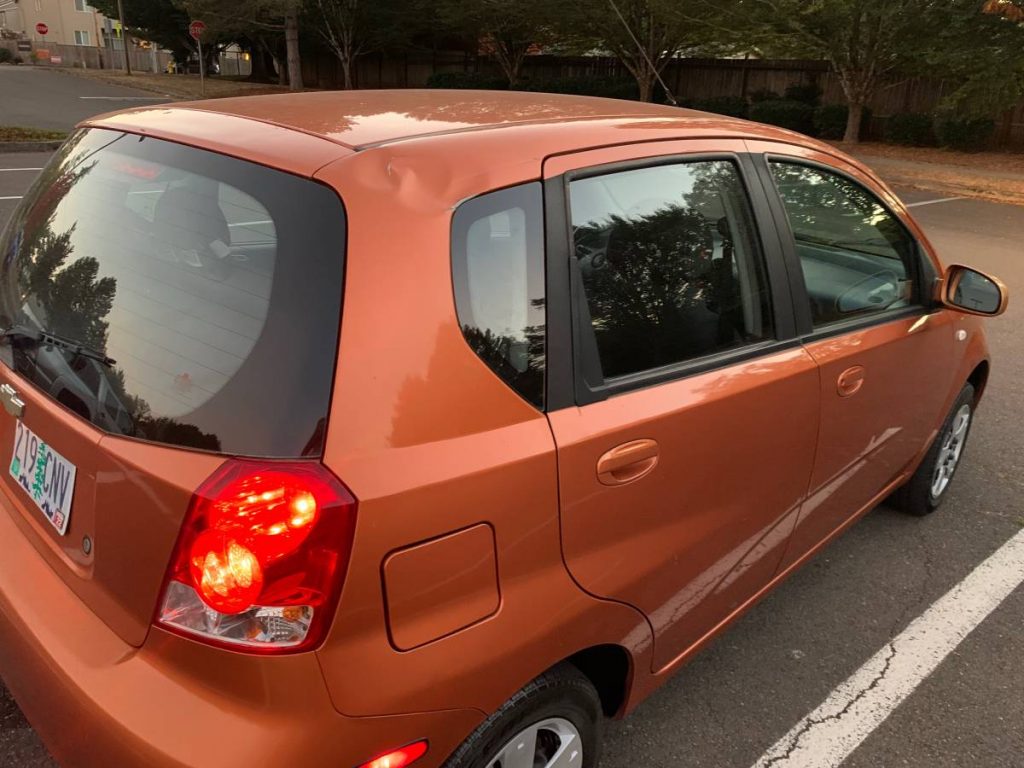 The Aveo has a somewhat spotty reputation for reliability, but I guess they did something right when they built this one. Small cheap cars are too often considered disposable and not taken care of; for a little econobox like this to clear 200,000 miles and keep going means someone took care of it. 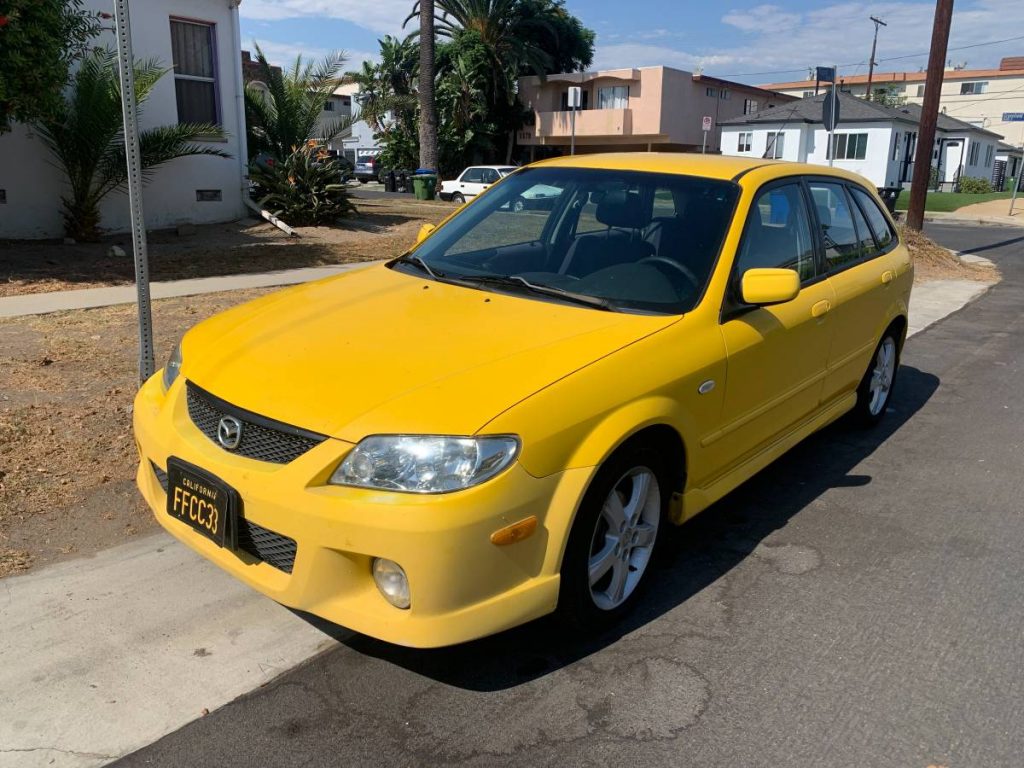 I am a huge fan of this car. The one and only car I ever bought new was a BJ-chassis Mazda Protege, though not a 5. It was a fantastic car for the four years I owned it: economical, good-handling, comfortable, and reliable. Over the intervening years, this car has gained a reputation for premature rust; it’s possible I dodged a bullet getting rid of it early. 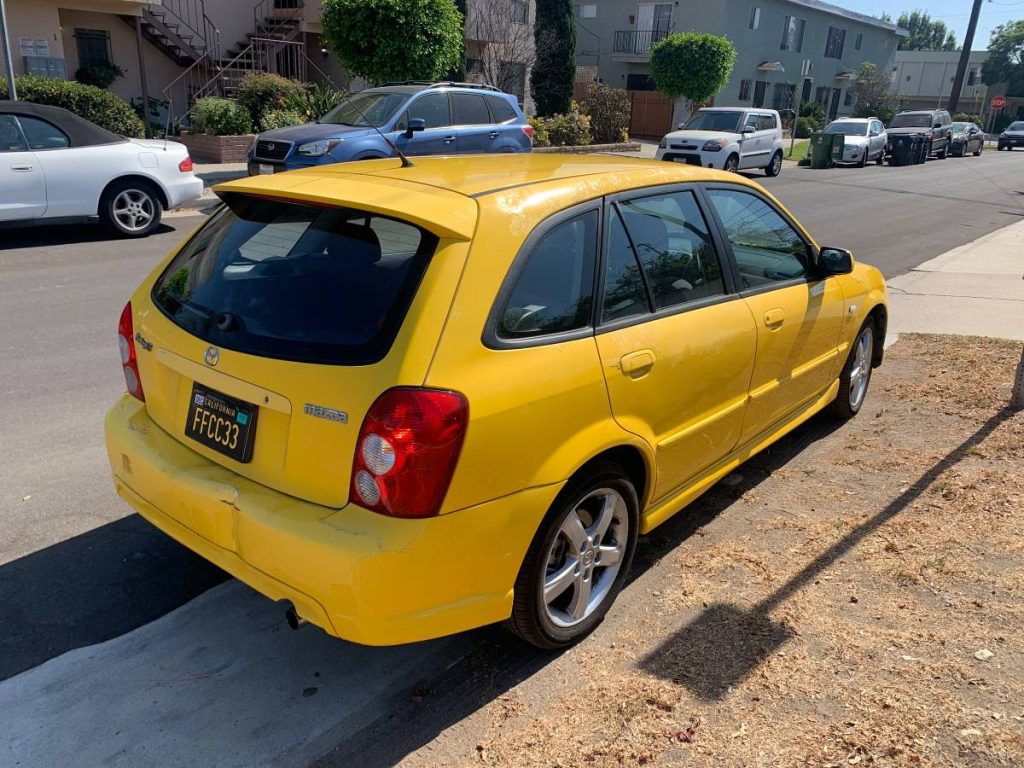 The seller of this Protege says it only has “1 or 2 visible rust spots,” but the fact that a car in Los Angeles has any at all is telling. Corrosion issues aside, what you’ve got here is a nice torquey 2 liter engine, a slick-shifting five-speed manual, and excellent road manners, all wrapped up in a practical small wagon body. 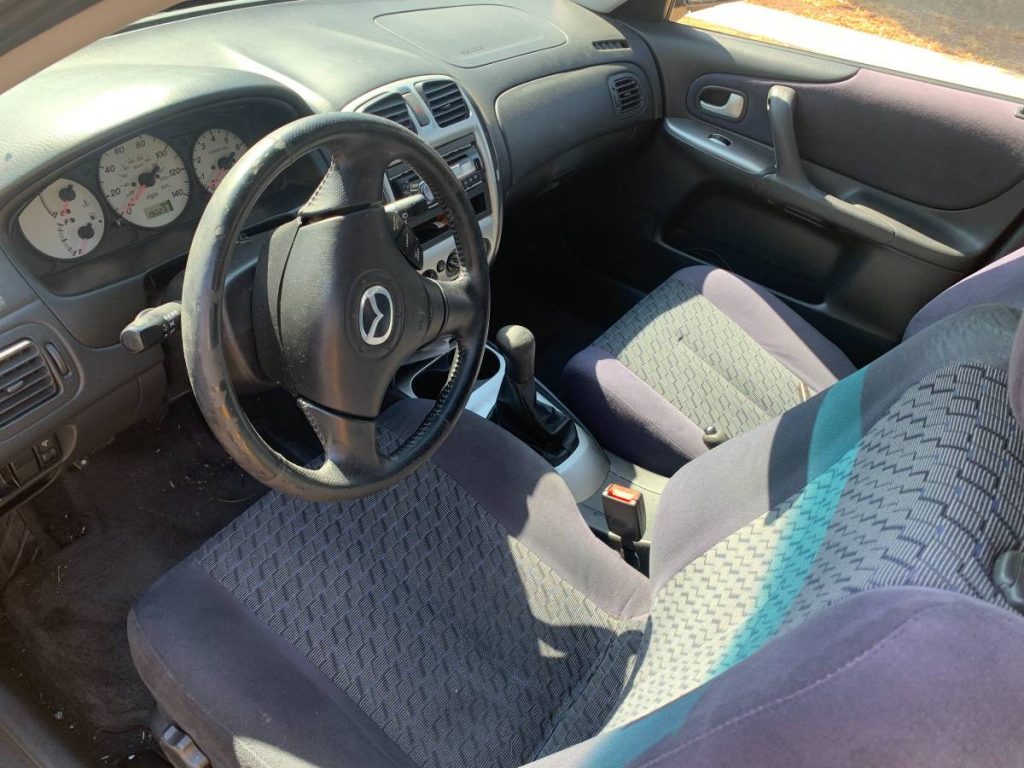 This car looks like it’s in good shape apart from the rust. The screaming-yellow paint is a little faded around the edges, and there is a sizeable dent in the back bumper, but it’s still perfectly presentable. Inside, it’s a little worn, but not bad at all. The Protege5 was only available in one trim level, equivalent to the ES model of the sedan. As such, it has plenty of goodies that my DX sedan lacked: rear disc brakes, sport seats, and power windows and locks, for a start. And a tach! Yes, as late as 2003, you could still get a manual car with no tachometer. 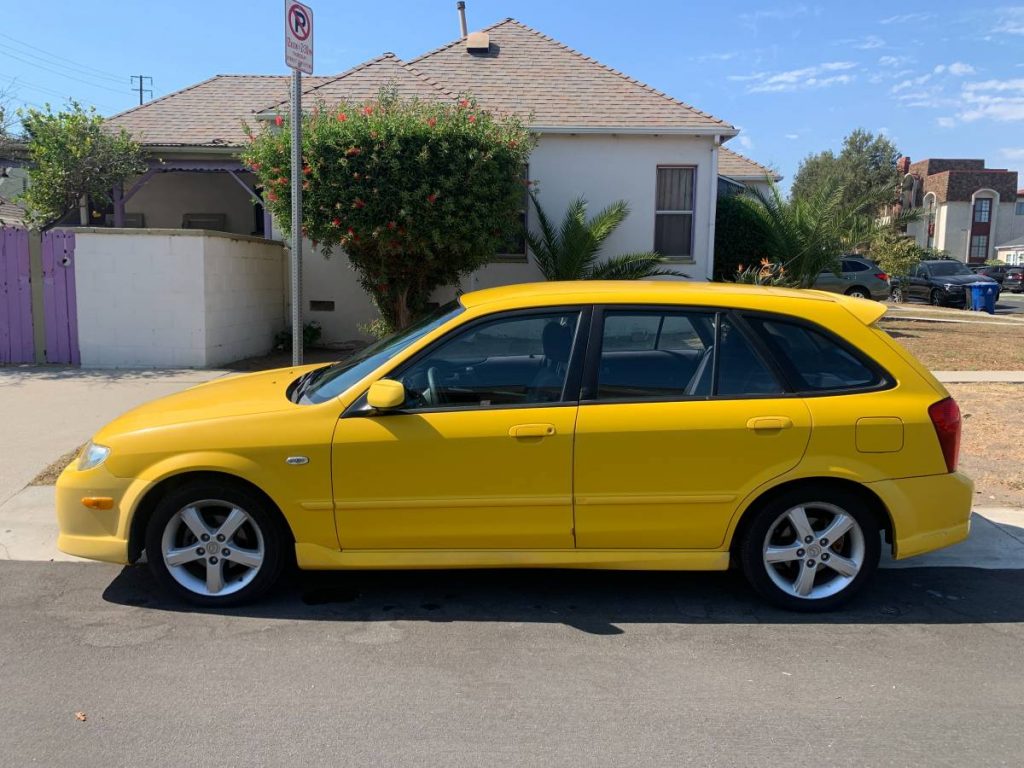 I still like these cars a lot, and it’s good to hear they’re holding up mechanically, even if rust is a potential problem. This one looks like a decent example, and it should still have some life left in it. It has new tires and brakes, and had the catalytic converter replaced a couple years ago, so emissions tests should be a non-issue.

So that’s what we’ve got for your Monday morning entertainment: Two small hatchbacky wagony things with stickshifts and cool paint colors. Which one catches your attention?