Mercury Monday: The Un-American Mercury Tracer, The Econobox With A Miata Engine

I promise I’m as surprised as you are that I didn’t forget that we announced Mercury Mondays last week and here, somehow, I started writing this before 6:59 pm today. But, look, here we are, with another installment of Mercury Monday, the series nobody asked for highlighting a marque no one is talking about. Today I want to focus on a very unusual Mercury, and one that is just about completely extinct from our roads and almost completely forgotten from the collective unconscious. Or, really, conscious, even. It’s the Mercury Tracer.

Specifically, I mean the first-generation Mercury Tracer, because that’s the interesting one. Back in another life, when I had another recurring-on-Mondays series about kinda blah cars, I mentioned the Tracer, but even then I was mostly focused on the later generations, when the Tracer became simply a re-badged Ford Escort. 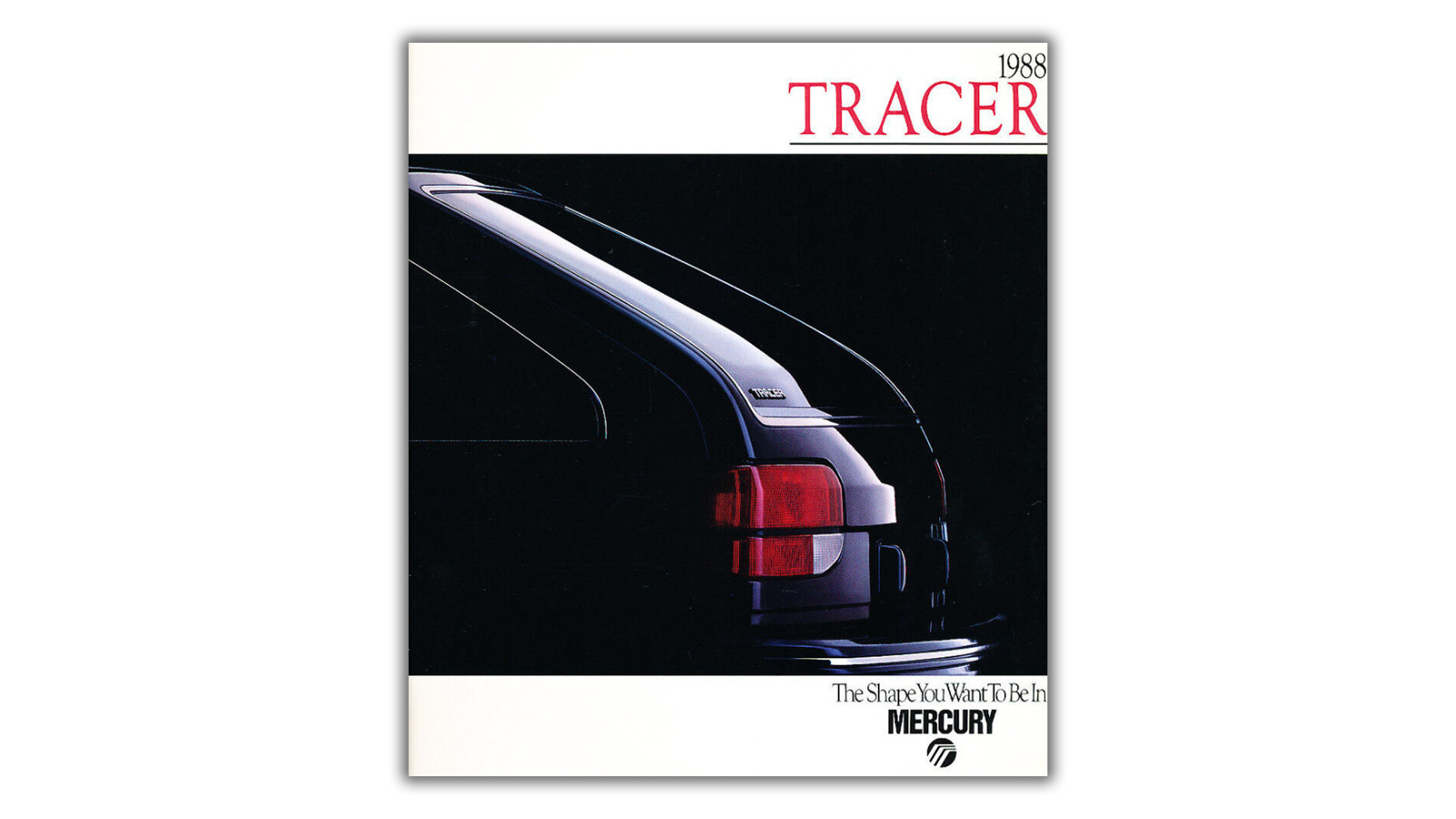 But the first Tracer, built from 1987 to 1989 in Mexico (for the US market, at least) was one of the very few Mercurys of the era to not be some re-worked Ford. Well, that’s not entirely true– the Tracer was pretty much the same as a Ford Laser, but the key difference here is that the Laser was not sold in America, but the Tracer was, making it that very rare thing, a car unique to just Mercury.

It also wasn’t so much a re-badged Ford as it was a re-bodied Mazda. Remember, this was in the early, honeymoon years of the Ford-Mazda alliance, and this particular love-child was essentially a front-wheel-drive Mazda 323, complete with the same B-series B6 engine that would be found (well, with double the number of valves) in the legendary Miata.

The Mercury Tracer was the first Mercury sold in America to not be actually built in America, and while that seems like it might have been a big deal now, as someone who lived during the Tracer Era, I can tell you that this fact was hardly common knowledge, and if you were to search for someone in that time who actually seemed to give a shit about this fact, you’d be traveling a long, long, time. In fact, as you go from town to town, you may as well adopt a mountain lion and fight crime, or something.

This first Tracer was a strange car because it definitely wasn’t crap, and yet it somehow managed to repel real personality or distinctiveness like a powerful interest in painting lead miniatures of the Battle of Agincourt repels sexual activity. The not-Mazda 323 body was curious mix of attractive, clean design, to the point that the car’s fiercely acceptable look contributed it to having essentially no look, making it one of the most generic-looking cars of its time.

I mean, look at this – you can slap a badge from any number of carmakers of the era and any of them seems as plausible as any other: 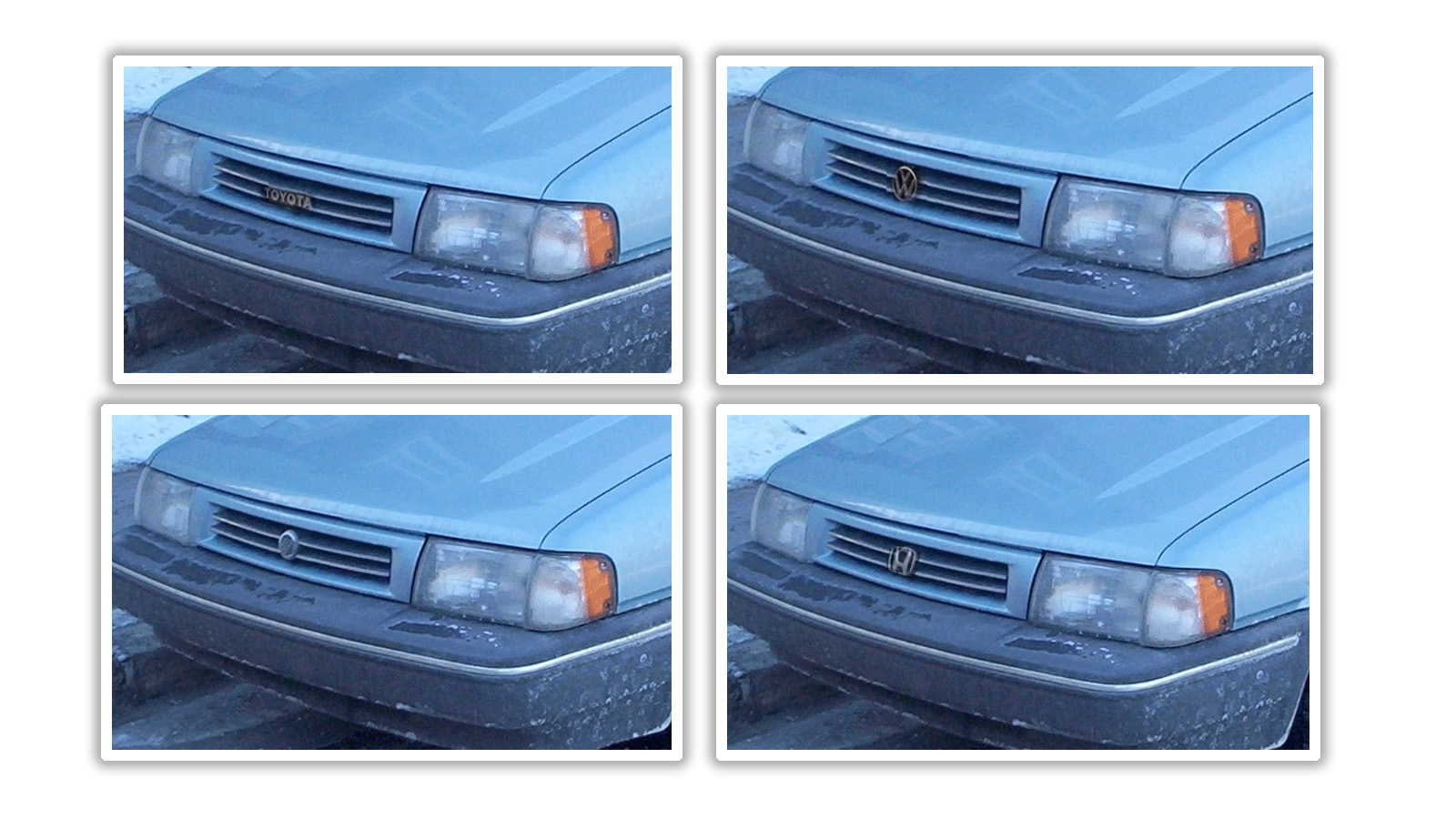 See what I mean? The first Tracer looks like it could have been made by almost any company, save for, you know, Rolls-Royce or something like that.

Whoever was doing Mercury’s ads of this era seemed to realize this as well, and ended up trying to push all the standard features, which included such underpants-moisteners as a rear window defroster, three-speed wipers, and a tachometer. All good stuff to have, but not exactly groundbreaking. 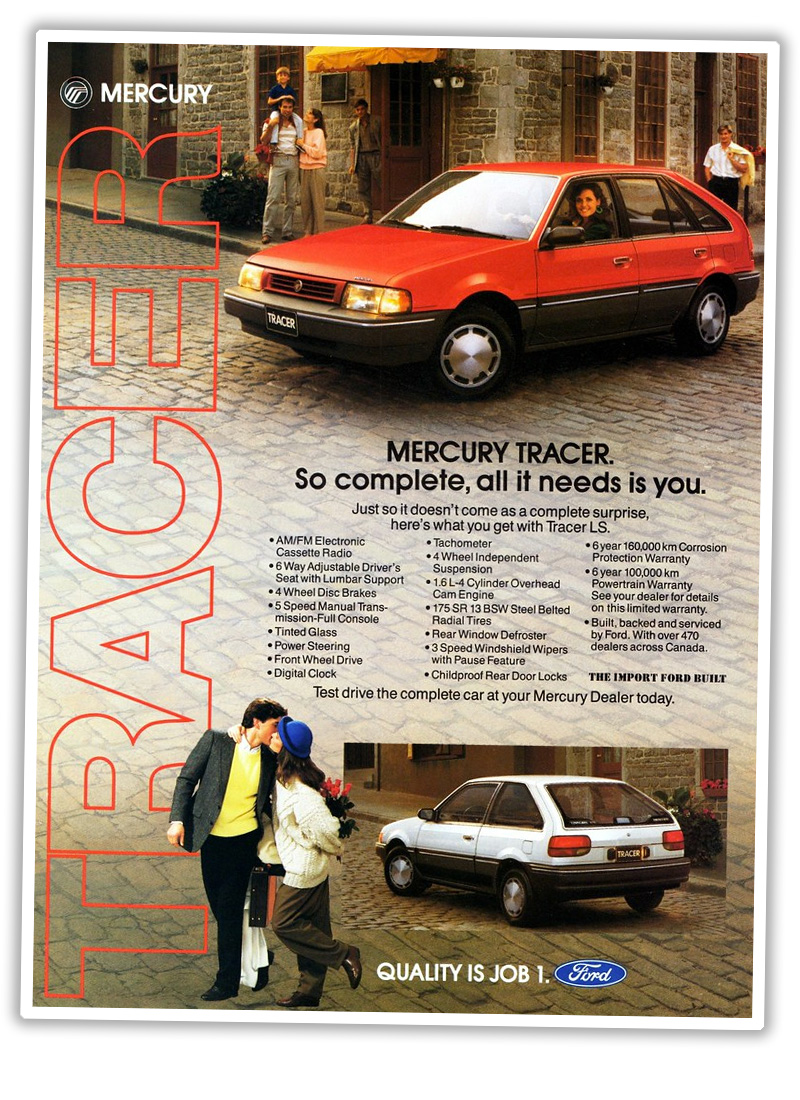 Mercury’s advertisers also created ads that seemed to be advertising as much the fundamental concept of having a car and the everyday joys of friendship more than anything else: 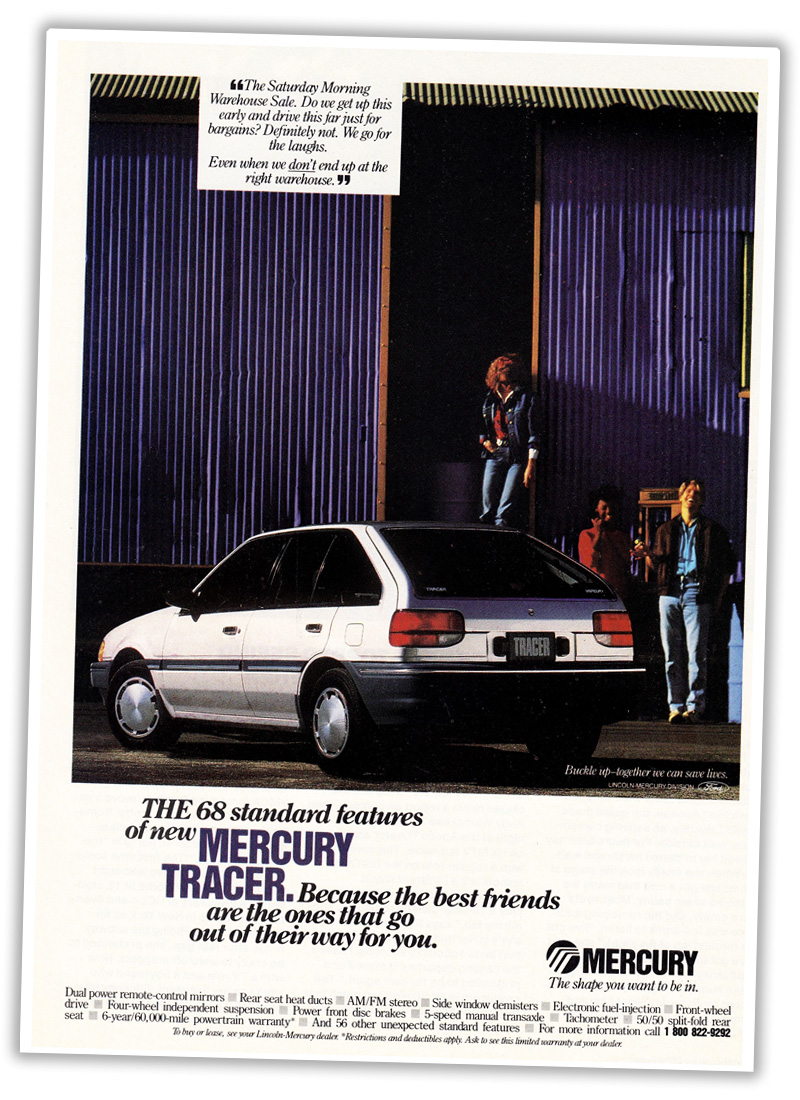 I mean, it’s a relatable thing, certainly: doing things with your friends in a car? Who doesn’t have fond memories of that? Of course, you could stick a Civic or Diplomat or Hornet or Beetle or whatever in that ad and it would still work about the same. Still, friends and cars is hard to find fault with and other Tracer ads seemed to follow this idea further:

This one also adds the concept of weather, which will not bother you when you’re safely ensconced inside your Tracer, which features both doors and a roof, after you and your besties enjoy a night of professional wrestling. Here’s a print version that relies on the same concepts: sometimes it’s shitty out, but you love your friends and want to talk to them in your car: 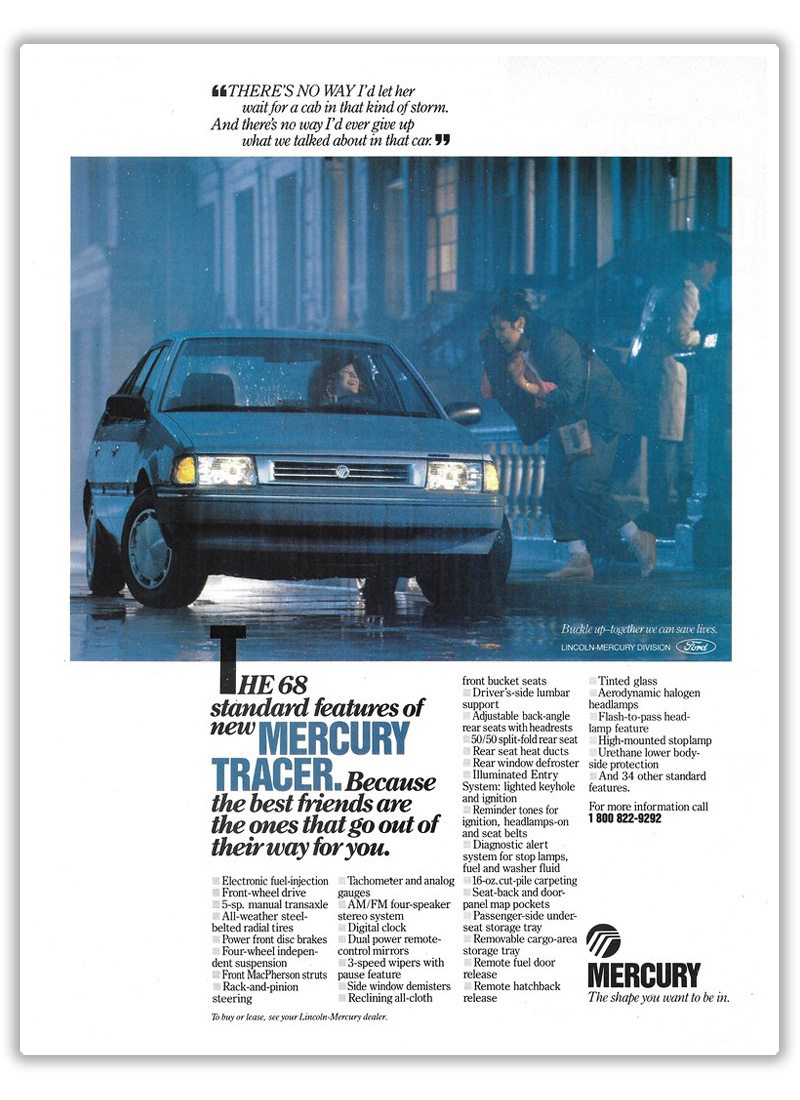 I mean, they’re not wrong.

Sometimes Mercury dazzled you by hiring some genuinely skilled drivers to whip these things around:

Here’s an interesting Tracer artifact, presumably a specific California-market commercial that features a mocking stereotype of an environmentalist, way back in 1988:

It’s funny to see how fringe Moonstone and her partner were presented, with their fretting about the use of whales in the making of the car, and yet now Ford and nearly ever other automaker has huge environmental initiatives and spends a great deal of money and R&D time to further such goals. Looks like Moonstone is the one laughing now. 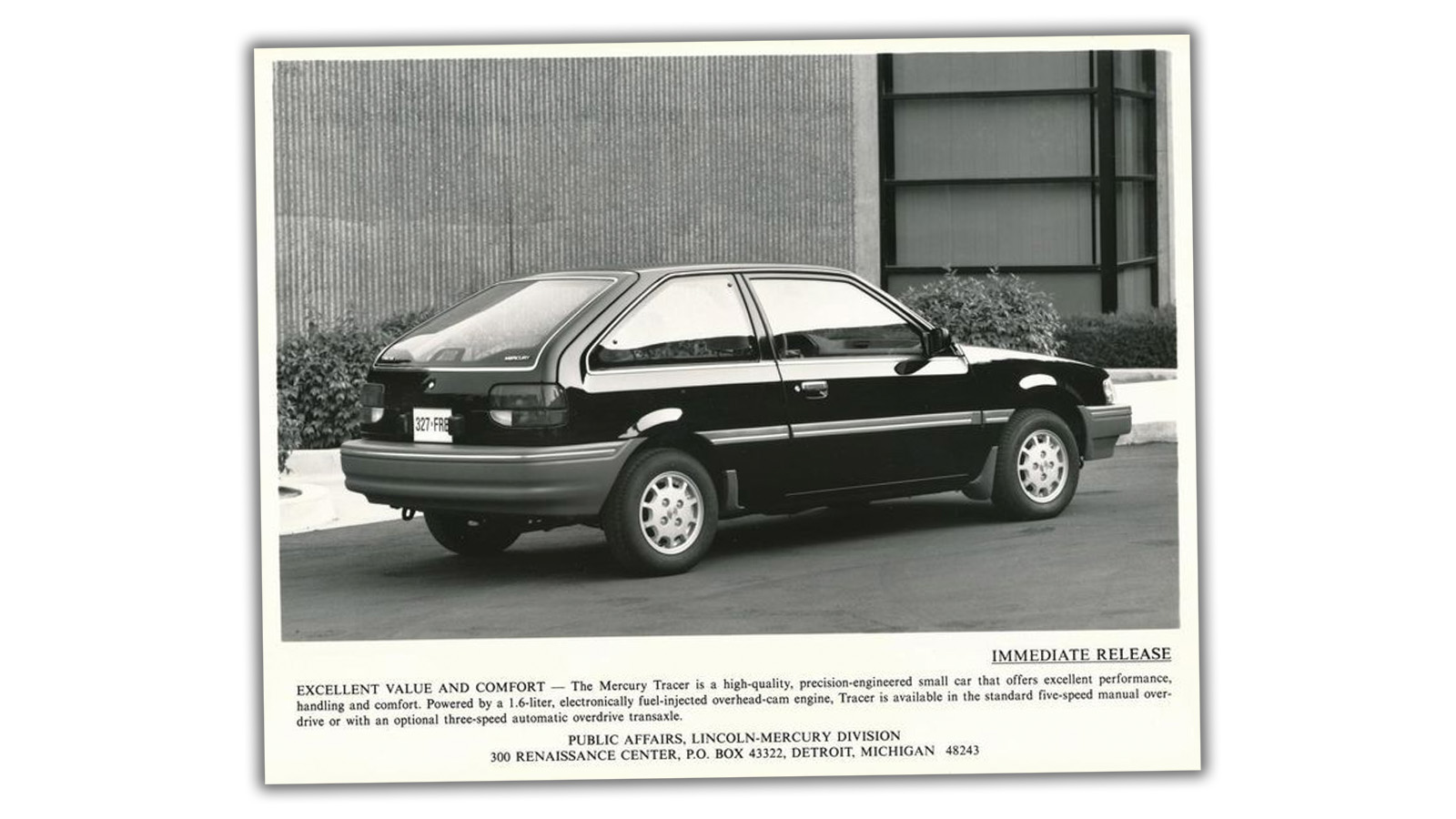 I think this rear-quarter view shows off the Tracer the best, and highlights its (kinda few) surprising kinks. The red-and-clear (as in no amber indicators) taillights anchored the car to an American-market look, as opposed to, oh, everything else about the car, while the use of the lower part of the rear glass to include the badging was novel and not seen often at all. Besides that? It’s you know, nice, and if you were committing a crime, it’d be an excellent getaway car choice, since about half the witnesses would say it was a Honda Accord hatch and the other half would say it was probably some Toyota and the third half would note that whoever was inside sure seemed to share a strong bond of friendship, and they bet there were so many incredible conversations in that car, especially in the rain.

The first Tracer always felt like a bit of an experiment, with Ford-Mercury testing the waters to see how a captive import might do under the Mercury badge. Sure, there was the European Ford Capri, but while that was sold at Lincoln-Mercury dealers, it was never actually badged as a Mercury, at least until the re-badged Fox Body Mustang came out as a Capri in 1979, but that was an American-made car. The earlier Capri was always just noted to be “imported for Lincoln-Mercury”: 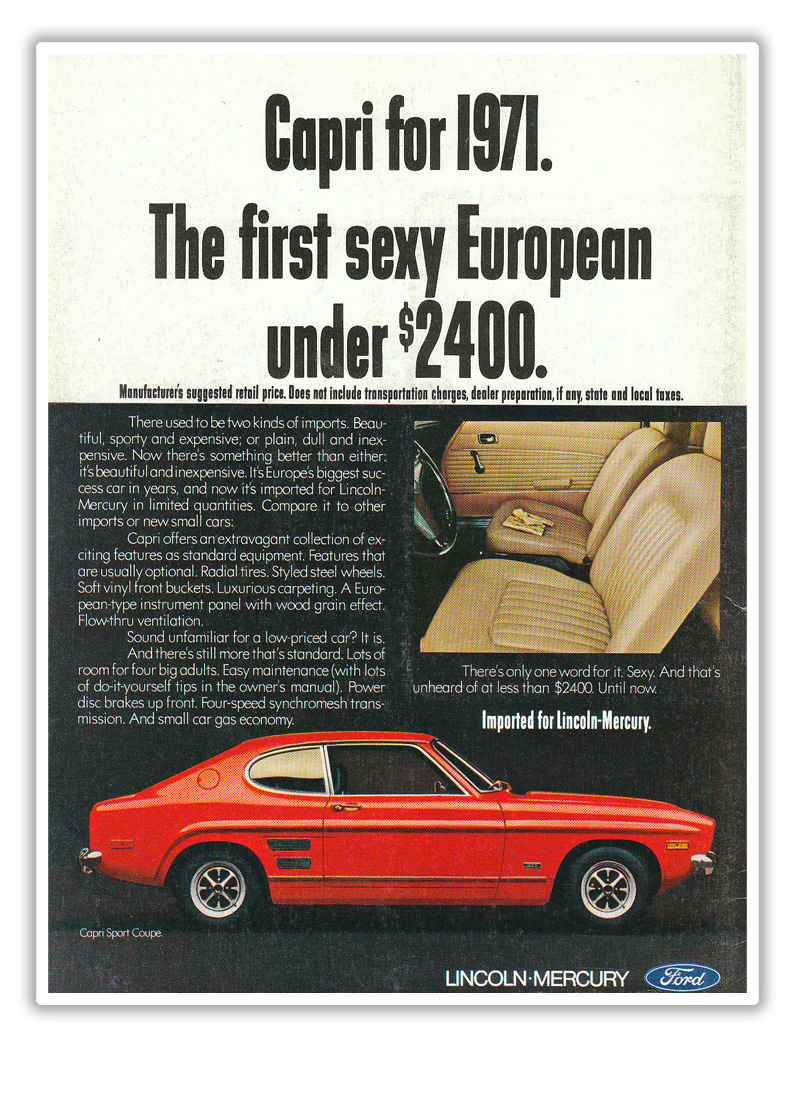 This first not-made-in-America Mercury I think was a sort of underrated car, because, really, it was a decent little car of the era. You could have done a hell of a lot worse than a Tracer.

Back in 1988, Car and Driver said some nice things about the well-equipped Tracer in a comparison test of cars that cost less than $10,000:

The Tracer’s beauty is that it offers the amenities many drivers take for granted, a technically sophisticated and roomy package, and a bargain price. This is one generic nameplate that none of the name brands can match.

Of course, it’s also rational to the point of being amnesia-inducing, and I think it also may be one of the least-thought-of Mercurys ever.

And, for a brand as little thought-about as Mercury is right now, that’s a significant achievement.

I'm a co-founder of the Autopian, the site you're on RIGHT NOW! I'm here to talk to you about taillights until you cry and beg me to stop, which I absolutely will not. Sorry. Hug? Also, David's friend.
Read All My Posts »
PrevPrevious$1.2 Trillion (With A ‘T’) Is What Experts Think Automakers Will Spend On EVs And Batteries By 2030
NextHere’s What I Learned At An Australian Cars And CoffeeNext