There’s a lot of things I don’t currently have at this very moment: a reliably-running car, hair in a small yarmulke-sized patch on the crown of my head, and any non-embarrassing clothes to wear when I head out to Pebble Beach to cover all the rich-people cars there next week, for example. But that last one I’m solving thanks to something important I do have: a wonderful friend I’ve known since I was five years old who has great clothes and is about my size. This friend also finds himself in a position where he needs a car, so I figured I’d try to return his clothes-lending favor by asking the best crew of car-selectors in the known universe. That’s you.

My friend is named Jeremy, and unlike all of us, Jeremy is a successful, well-adjusted person with a real job and a wife who went to 9th grade prom with me and dogs and a house and no painful obsession with cars. He’s a huge F1 fan, sure, but when it comes to cars he’s very much a normie, in that his needs are rational: safe, reliable, all that. Oh, but he does play a double-bass, so he needs something that can haul around an instrument the size of a corpse.

He had a 2013 Subaru Impreza Wagon that was just wrecked and totaled, which is why he’s in this position. Insurance gave him about $11,000 for the car and he’d like to spend up to about $20,000 total, which is actually a good number, because here at The Autopian we’ve informally decided that if we ever do regular Help-Me-Pick-A-Car posts, we’d like to make it so they have a $20,000 cap. It just feels right that way.

So, what can we find for Jeremy here? He wasn’t that attached to his old Subaru, so don’t worry about brand loyalty. My fear is that his set of requirements will mercilessly shove him into the arms of that safe, reliable, but boring triumvirate of the Toyota RAV4, Honda CR-V, or Nissan Rogue. Maybe that’s fine, but I’ve never been crazy about the Rogue’s CVT, and, dammit, I just want more for him. But it can’t happen at the expense of usability or reliability or just overall ease, so my dream of him shoving that bass into the back of a Citroën DS Break probably isn’t realistic. 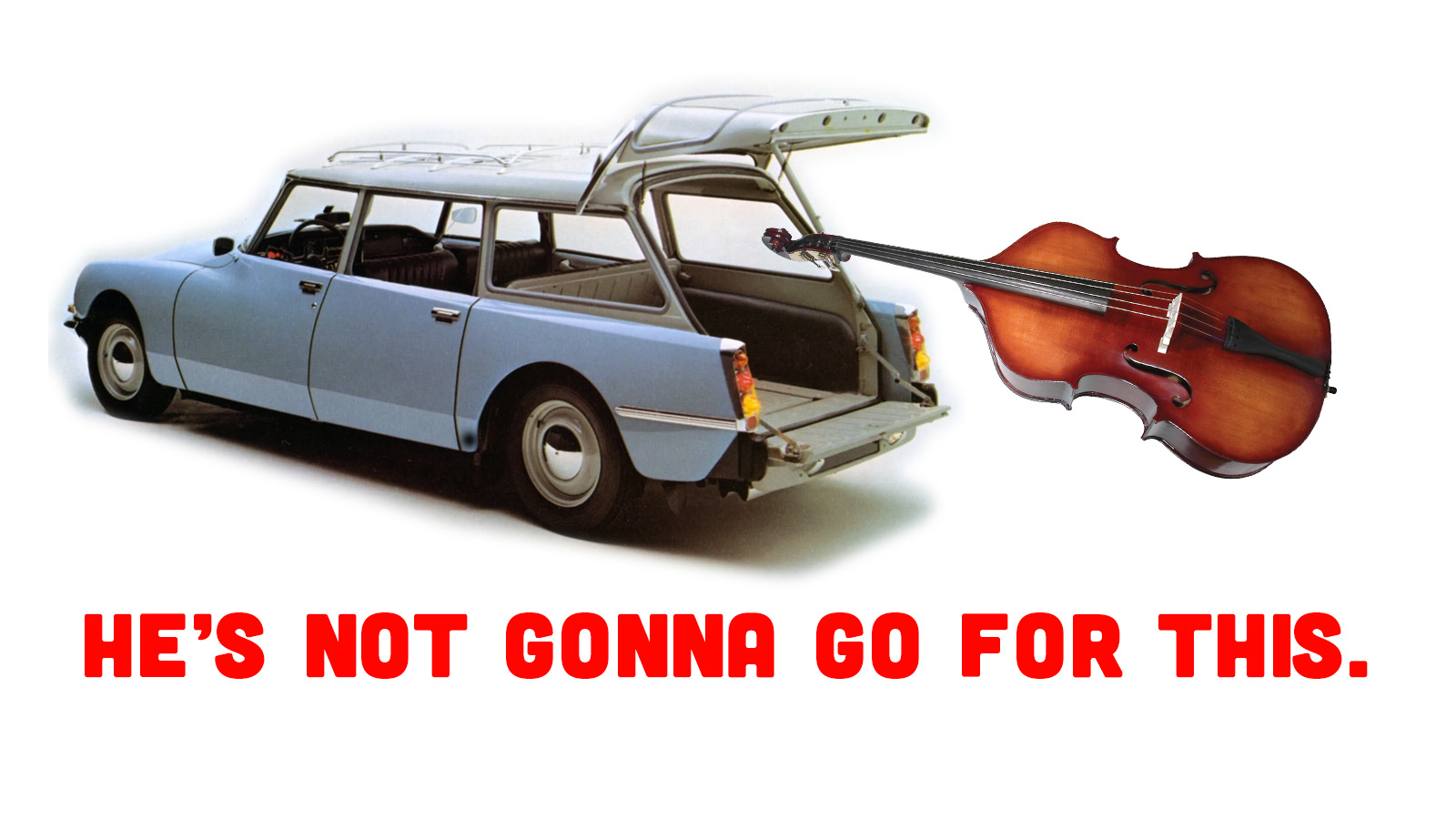 We were considering a pickup like the Ford Maverick, but the bed is just too small for a bass, and most other pickups aren’t what he wants, either, because a bass isn’t just a bunch of lumber or bags of peat moss. You can’t just fling it into a truck bed, so he’s not really interested in the truck route.

With this in mind, I’m going to ask Team Autopian to come up with three choices for him: a safe one, a bold one, and, yes, a bonkers one, because I’m here to entertain, too, dammit. And you can vote on the best ones!

And, then, of course, I desperately want your choices in the comments! Because you’ll likely have ideas we didn’t consider! So let’s get to it! 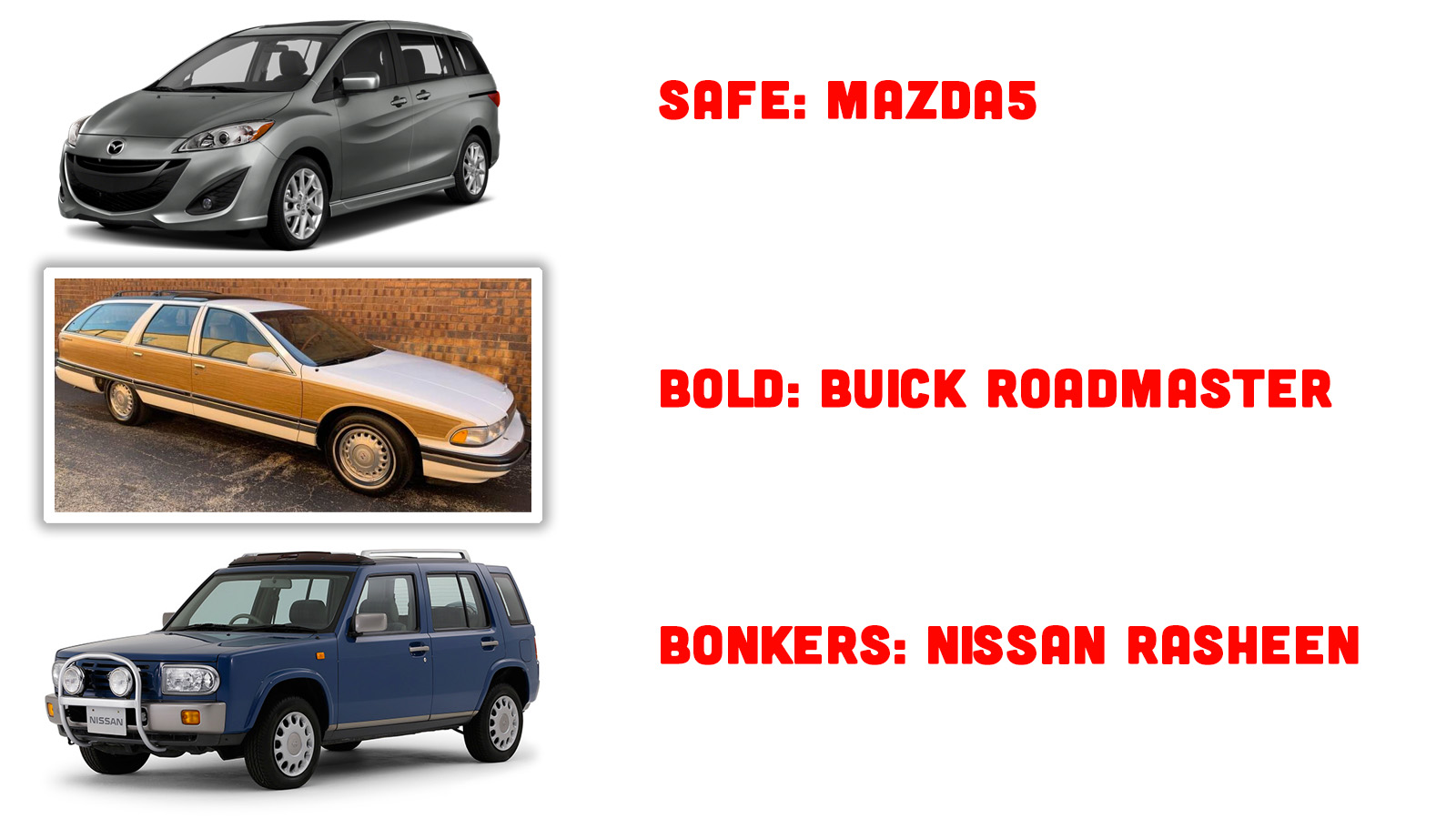 The Mazda5 is a rational, useful reliable car that happens to be a blurry mix of SUV and minivan. I always liked the swoopy character lines, and the side sliding doors should be great for getting Jeremy’s dogs in and out. Seats folded, there’s plenty of double bass room. Maybe even triple bass room. You can find good ones of these for less than $20,000 still.

I have a bit of inside information here because Jeremy told me that he kinda wanted a big car for a change. And, if nothing else, a Roadmaster is a big car. Plenty of double-bass room, ideally that wood paneling, and, really, it’s not hard to keep going. Parts are common and relatively cheap, and sure, it’ll drink gas, but that’s a small price to pay for living-room luxury and class out the ass. You can find these in great shape for between $10-$15,000 or so, too.

I’ve always thought these were cool. This JDM little SUV has all kinds of boxy charm, should be able to fit that bass fine with the rear seat folded, and has gobs of right-hand-drive weirdo charm. If it’s anything like my Pao, it’ll be a reliable daily driver, too. Duncan Imports has these for a very reasonable $6,900! 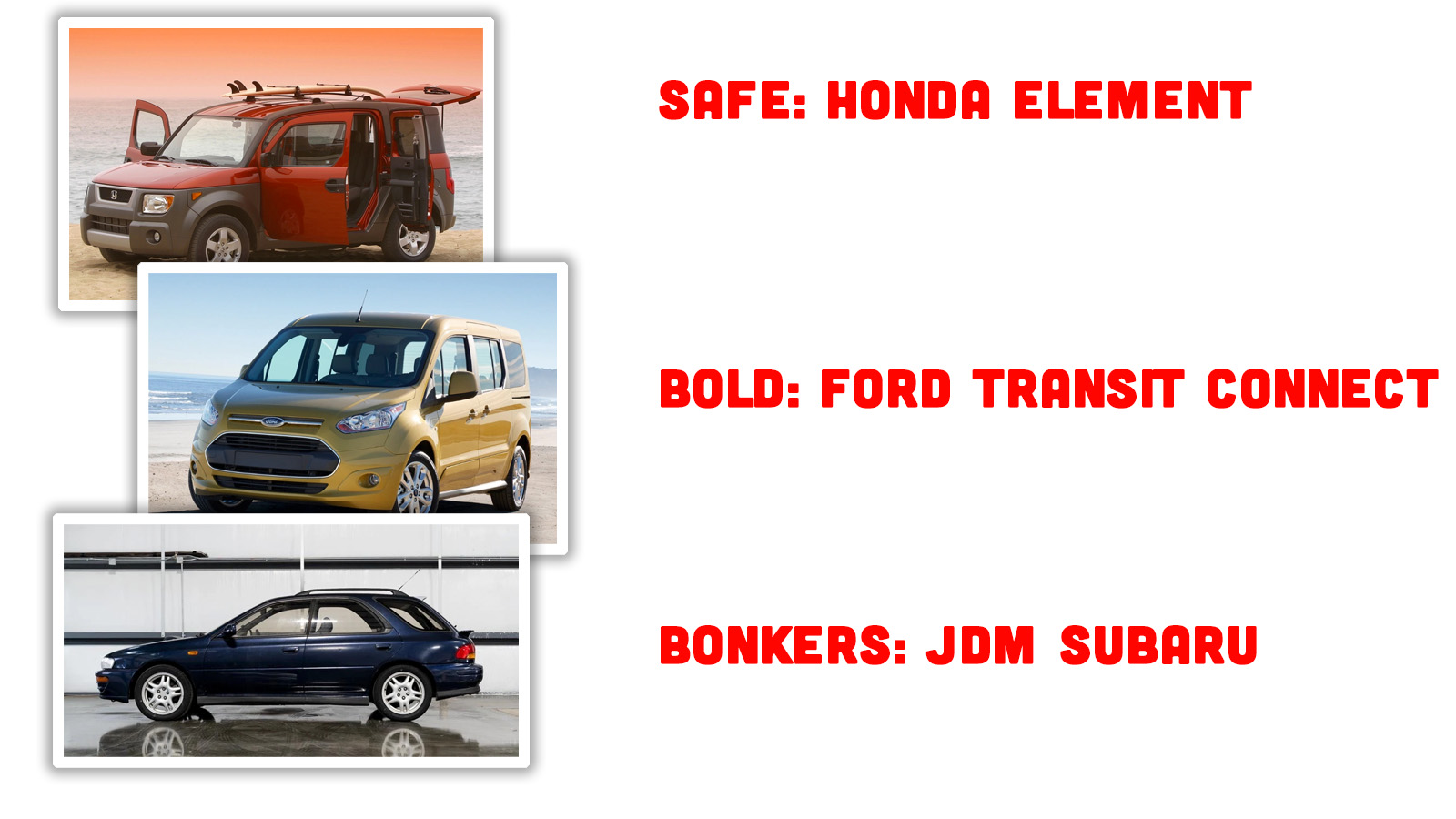 Safe: The Honda Element is likely spacious enough for large stringed instruments and is efficient to boot, with an interior that can be washed if your dog makes a mess.

Bold: A Ford Transit Connect has enough room to hold both a double bass and the longing regret your significant other feels at not locking down Jason after junior prom.

Bonkers: I still think the 1st gen Subaru (GF) WRX wagon was the best looking WRX and it’s a shame we never got it here, but this one from Oishii Imports is half your budget and not Concours-clean so you can actually use it without fear of harming a future classic. 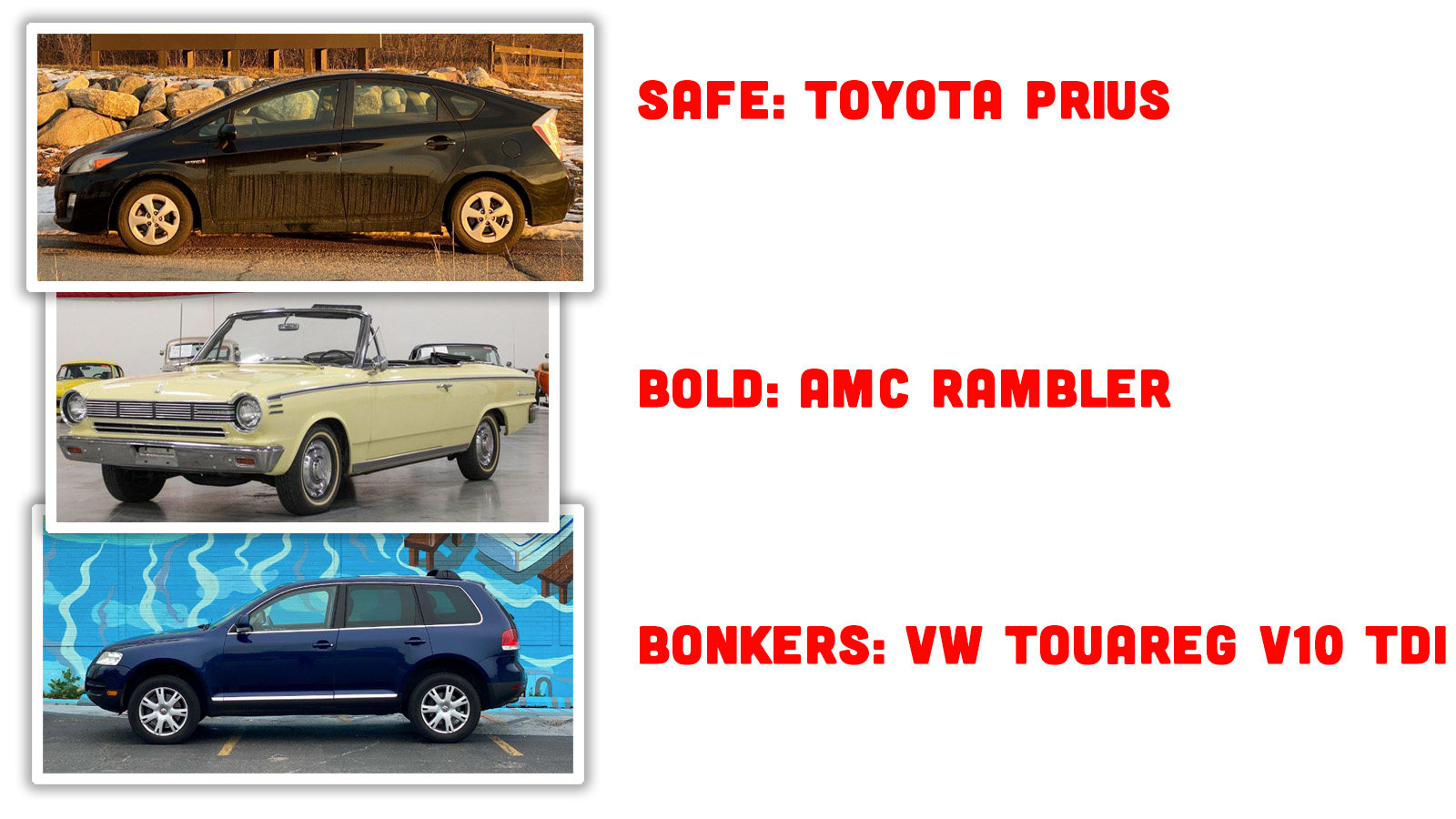 The Toyota Prius is not a car that will excite you with its driving dynamics. Instead, it’s meant to do one thing and one thing only: Reliably pass fuel station after fuel station. The one in my shared fleet has been a reliable workhorse and even fits a surprising amount of crap in it.

The good thing about not having kids is that you don’t have to worry about if your daily driver is safe or not. So why not get a classic? An AMC Rambler has solid classic style and you can find them for cheap all day long. Plus, they can be found in a variety of body styles.

Look, you aren’t spending money on feeding, clothing, educating, or otherwise keeping children alive. That means that you can spend more money on cars! Why not spend it on one of the wildest SUVs to ever grace the planet. Yes, the Volkswagen Touareg V10 TDI requires you to drop the engine to do any repair, but the second you hear the sound of that engine (like a Lamborghini mixed with a shaking can of bolts) and the thrust of the torque you’ll fall in love. Then you’ll fall out of love when your mechanic buys a yacht with your repair bills. 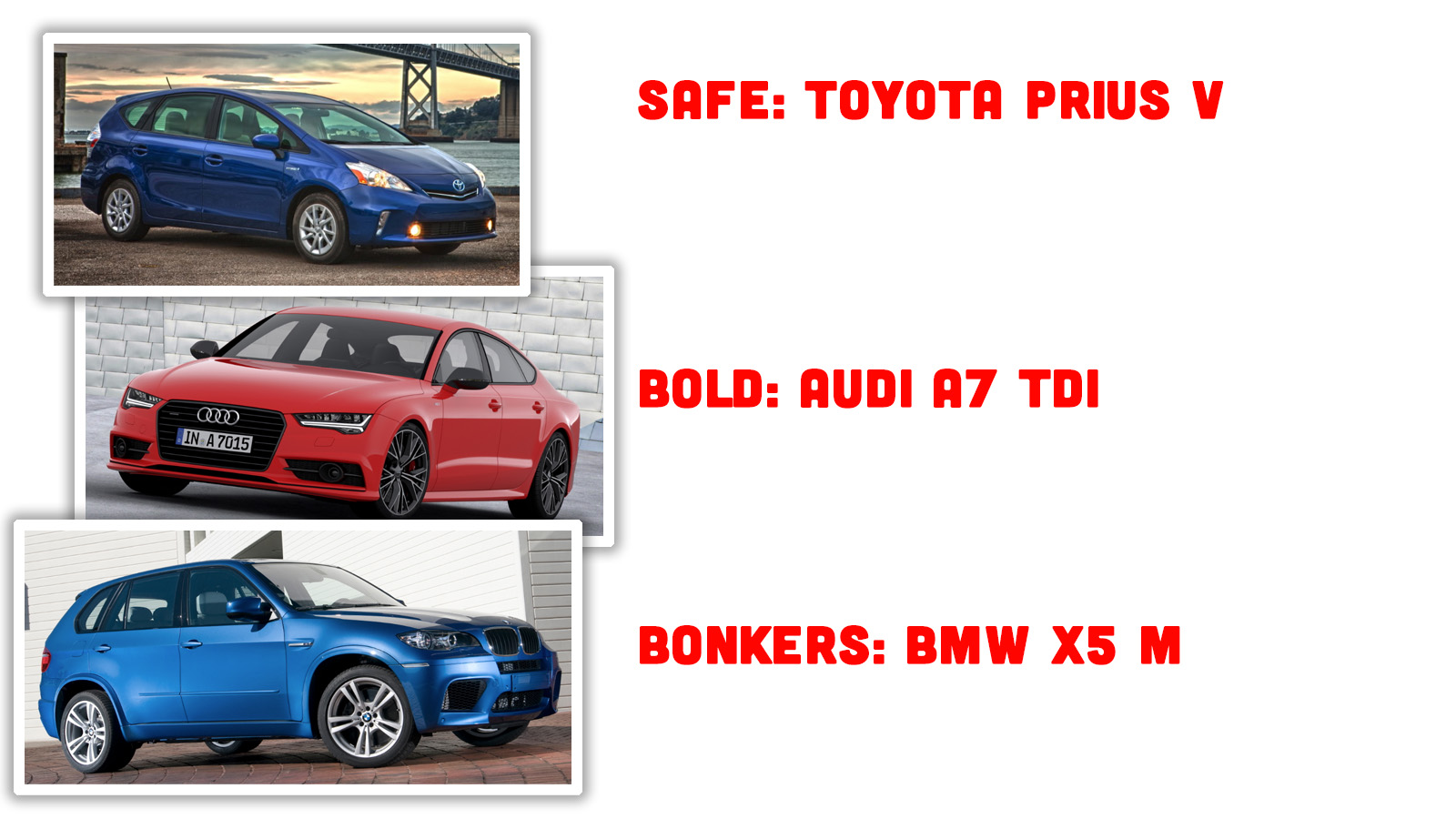 Everyone knows about Toyota’s archetypal hybrid, and the Prius V is an immensely practical MPV variant of the popular battery-augmented fuel-sipper. It’s about as exciting as unbuttered toast but its deeply pragmatic nature is exactly what most people want in a daily driver.

Bold: Audi A7 TDI
An economical and wonderfully-appointed diesel luxury sedan that just happens to be a cavernous hatchback. The first-generation A7 may be getting older, but it still looks and feels like an $80,000 car. You’ll have to look really hard to find one within budget, but wallet-friendly examples are out there.

Bonkers: BMW x5 M
Why not throw sensibility out of a fifth floor window and pick up a fire-breathing 555-horsepower super SUV with a manufacturer-claimed zero to 60 mph time of 4.5 seconds? It may be rated at 14 mpg combined, but it’s less catastrophically unreliable than its N63 V8-powered little brother, so that has to count for something, right?

[Editor’s Note: Thomas has assured me all of these can be found for under $20K, if you’re willing to look. – JT] 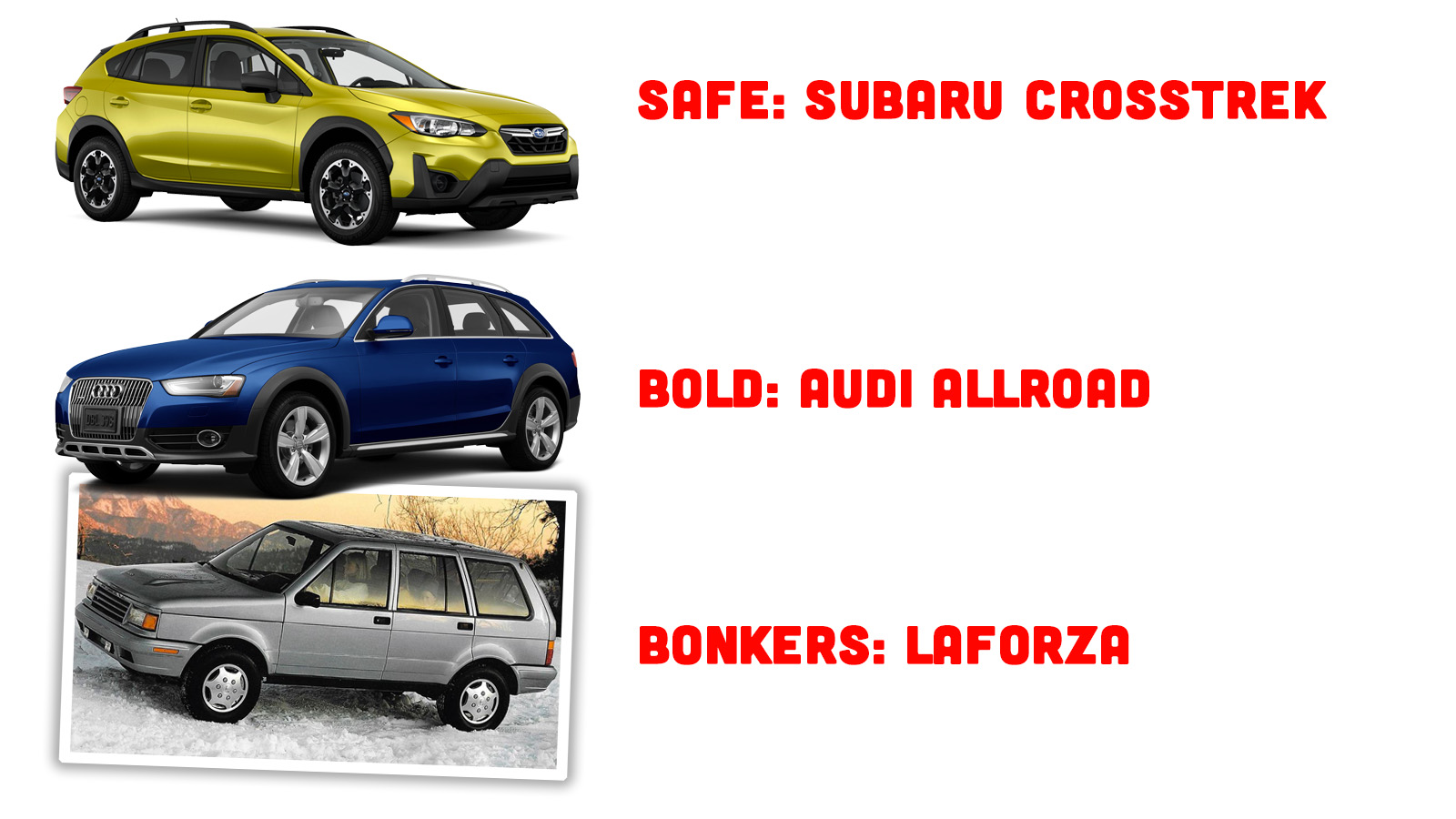 The reliable Japanese choice (now that the head gaskets in these aren’t made of wax paper anymore), you can at least get it in REAL COLORS, like bright orange and the not-grey-not-blue like a Fiat Strada, so you can’t lose it in a parking lot

A handbuilt off roader with an American V8, but Italian electrics, in a constant fight…and you can guess who’s gonna win THAT one.

Okay! David’s being interviewed for an AMC documentary, so you’ll just have to imagine his rust-saturated selection of Jeeps. Now, let’s see what you like best from each category.

First, which Safe choice do you prefer?

And finally, the Bonkers:

And, of course, comment! Give us better ideas! Jeremy needs a car!

I'm a co-founder of the Autopian, the site you're on RIGHT NOW! I'm here to talk to you about taillights until you cry and beg me to stop, which I absolutely will not. Sorry. Hug? Also, David's friend.
Read All My Posts »
PrevPreviousThe New 2023 GMC Canyon Looks Like A Menacing Off-Road Beast
NextHow The World’s Quirkiest Car Museum Is Solving The Mystery Of This Strange Tiny CarNext