In the course of researching the history on the cars in Lane Motor Museum’s collection, things can get messy fast. Much of the information on an individual car is passed down from the previous owner. Often times, owners have been given incorrect information, especially if it’s from a rather obscure make. And yet other times, the information we are given is incomplete. Part of the fun of working at the museum is playing detective, and having to uncover the real story. This is one of those stories. *Law and Order dun-dun sound* 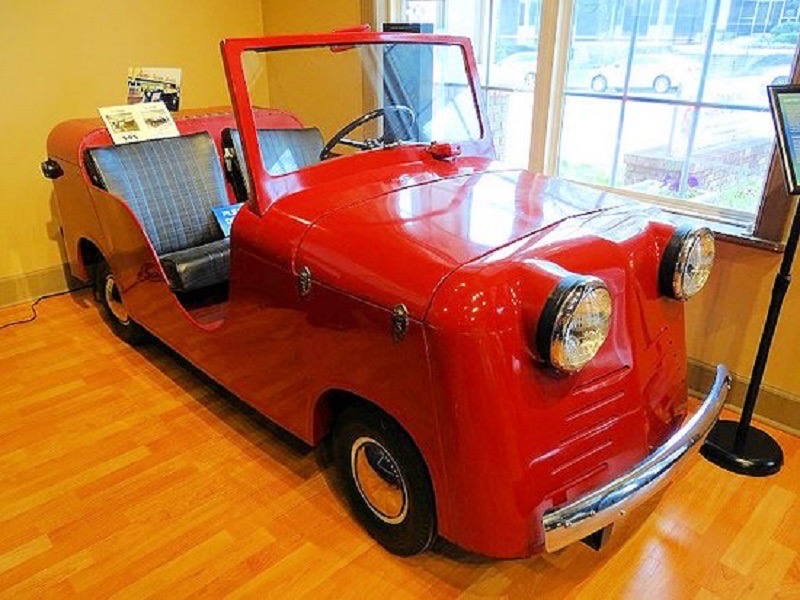 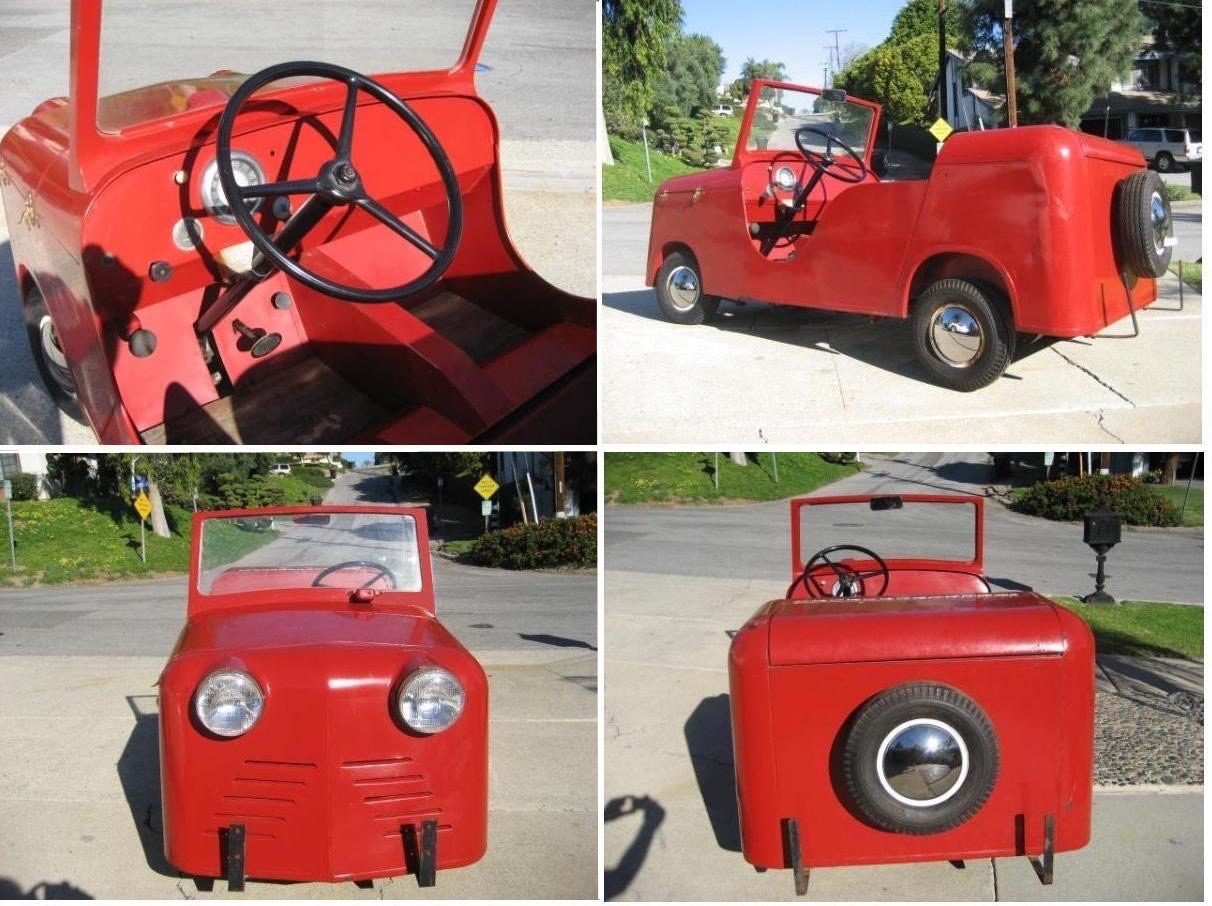 When we acquired this Carter Town Shopper a few years ago, the title (and the California black license tag) said it was a 1942 model. I thought that was very interesting, as not many manufacturers were building cars during World War II. 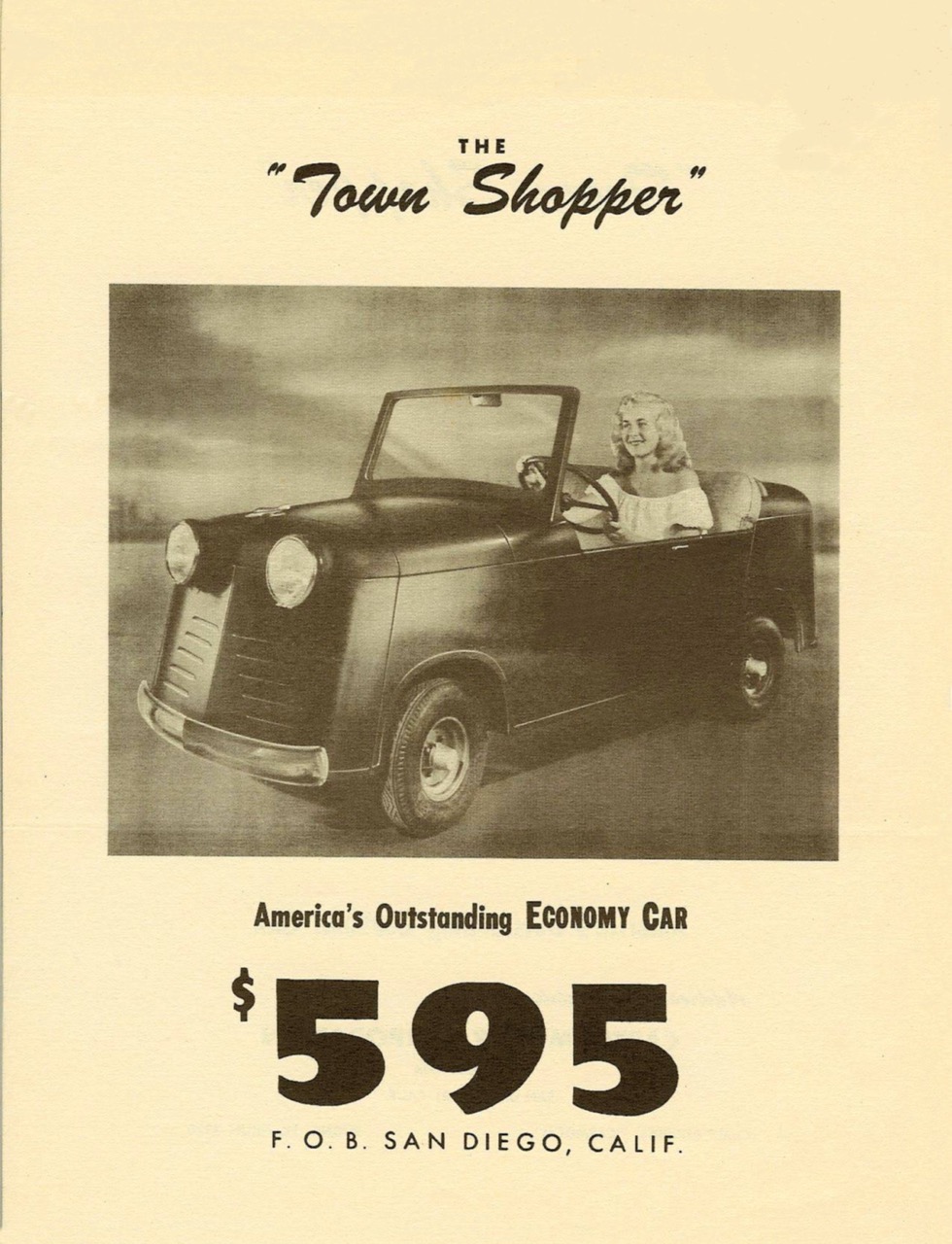 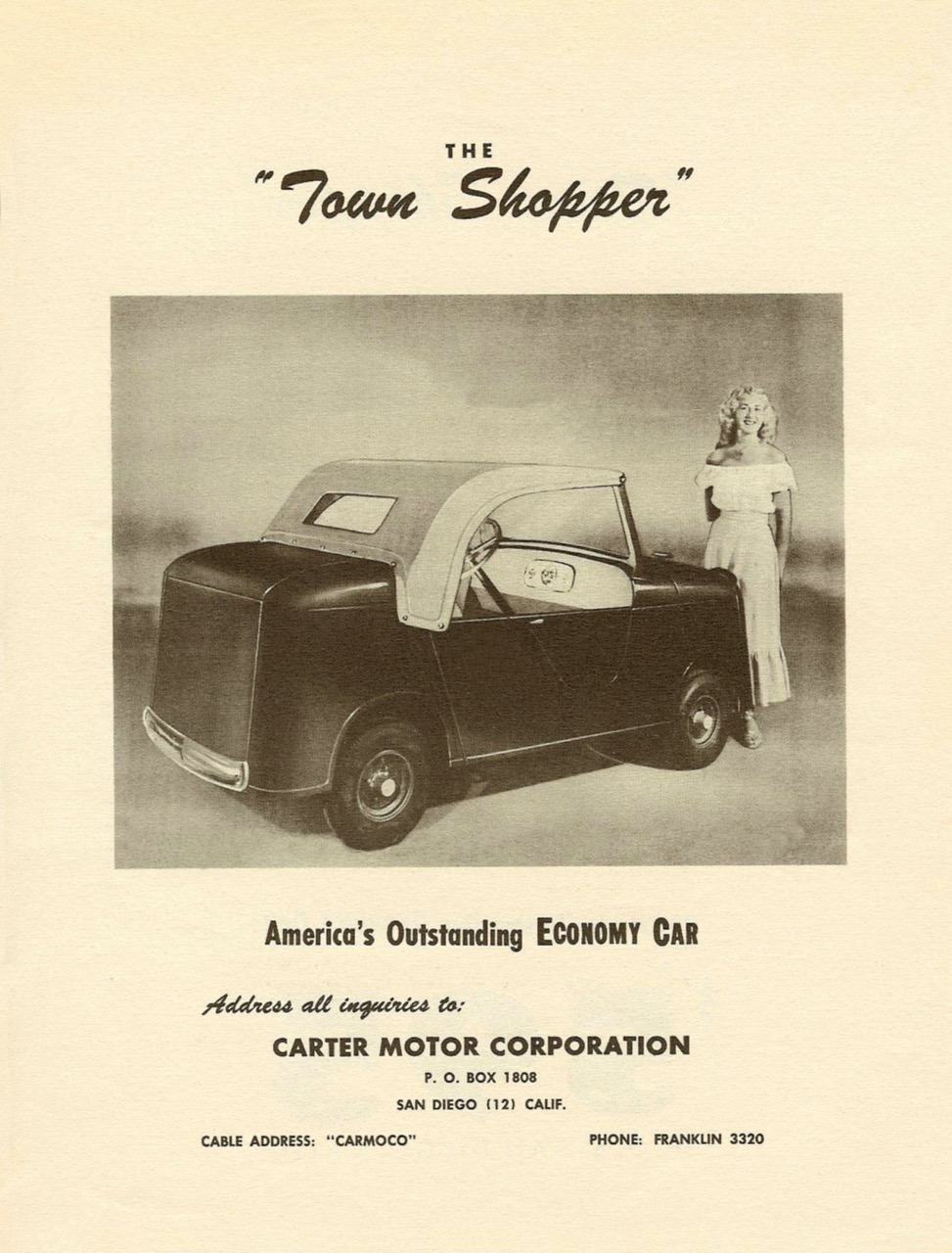 I posited that as a new, small, company they weren’t building enough (or any) cars to be pressed into the war effort. 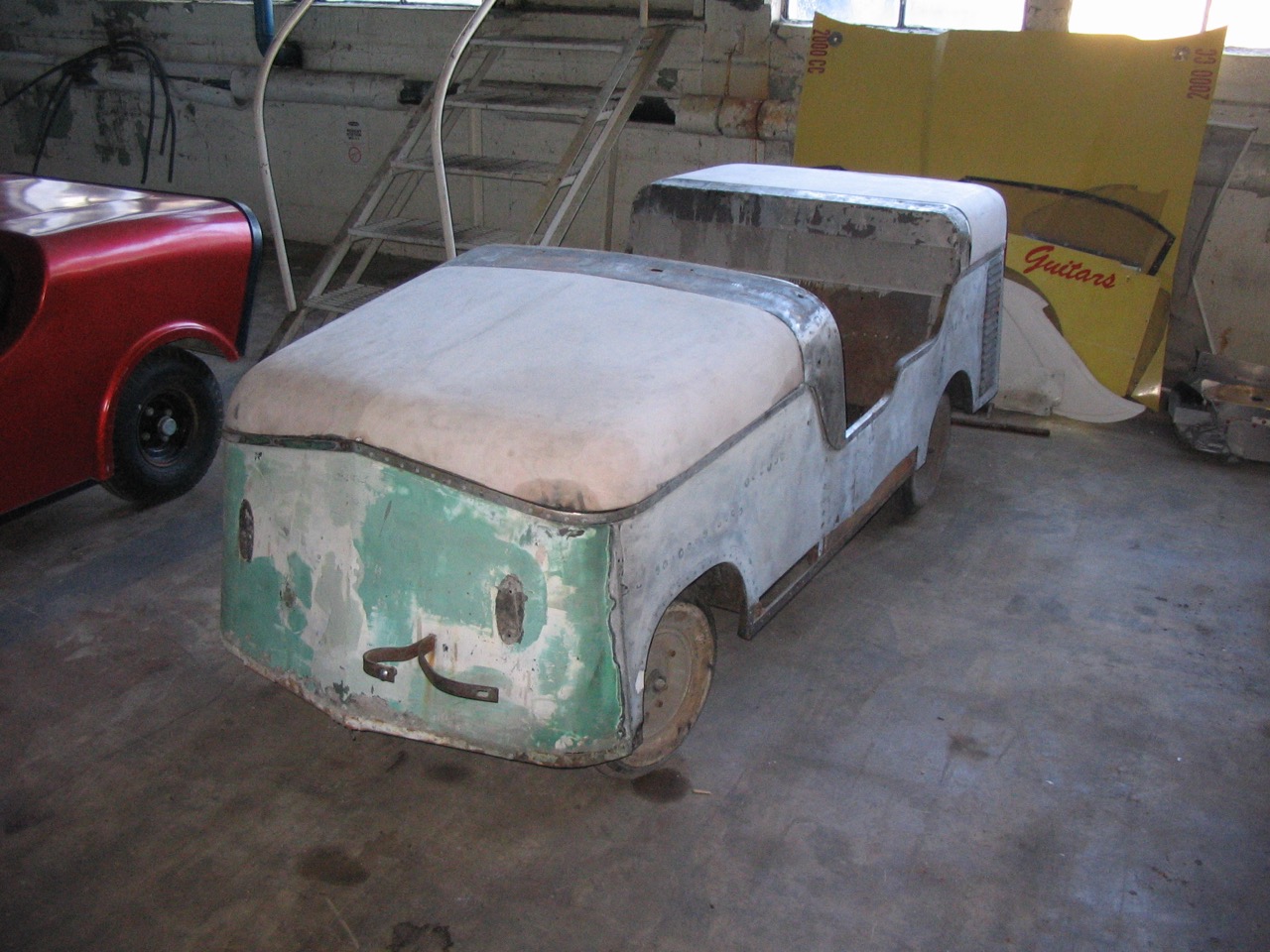 What I failed to realize was that our other Towne Shopper project car (yes, with an “e” on the end of “town”), was titled as a 1948. Huh, that’s odd. Why were there so many years difference between two models of the same company? Why does the “1942” Shopper have its engine in the front, while the “1948” Shopper have a rear-mounted engine? These were obvious differences… but there were several things that weren’t adding up. I headed to our Archives to delve deeper. 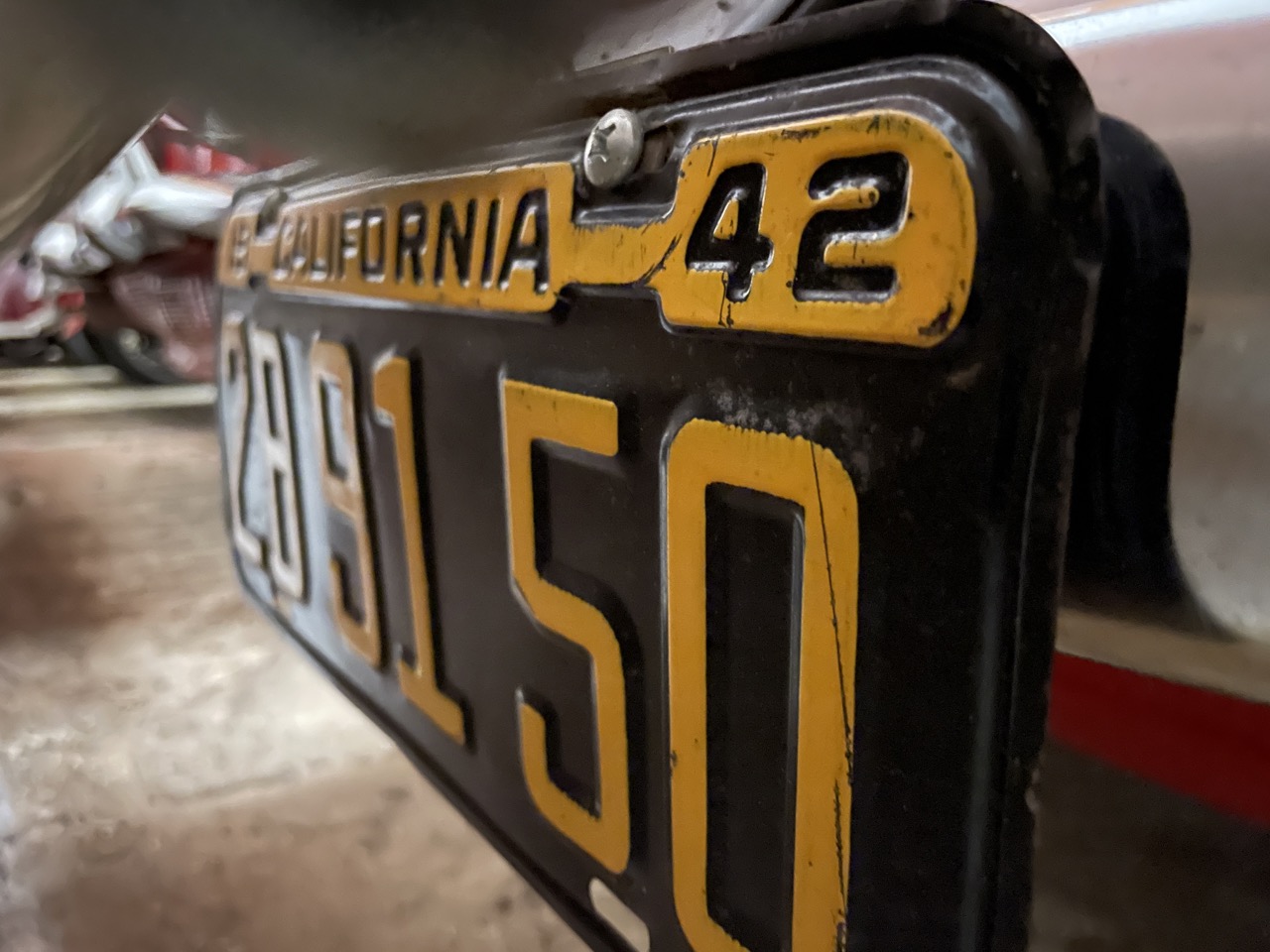 I now believe the 1942 Carter Town Shopper was titled with the incorrect year of manufacture. My theory is that someone found a 1942 California tag, slapped it on the car, and the car received its title based on that tag. The Carter Town Shopper came with a plethora of information about the Harvey Motor Car Corporation, including press releases, advertisements, and pictures.

I even found a newsreel clip, and the “Harvey” Towne Shopper was even featured on the cover of the April 1948 issue of Popular Mechanics. Digging through these items, the very muddy picture of these two cars is becoming clearer. 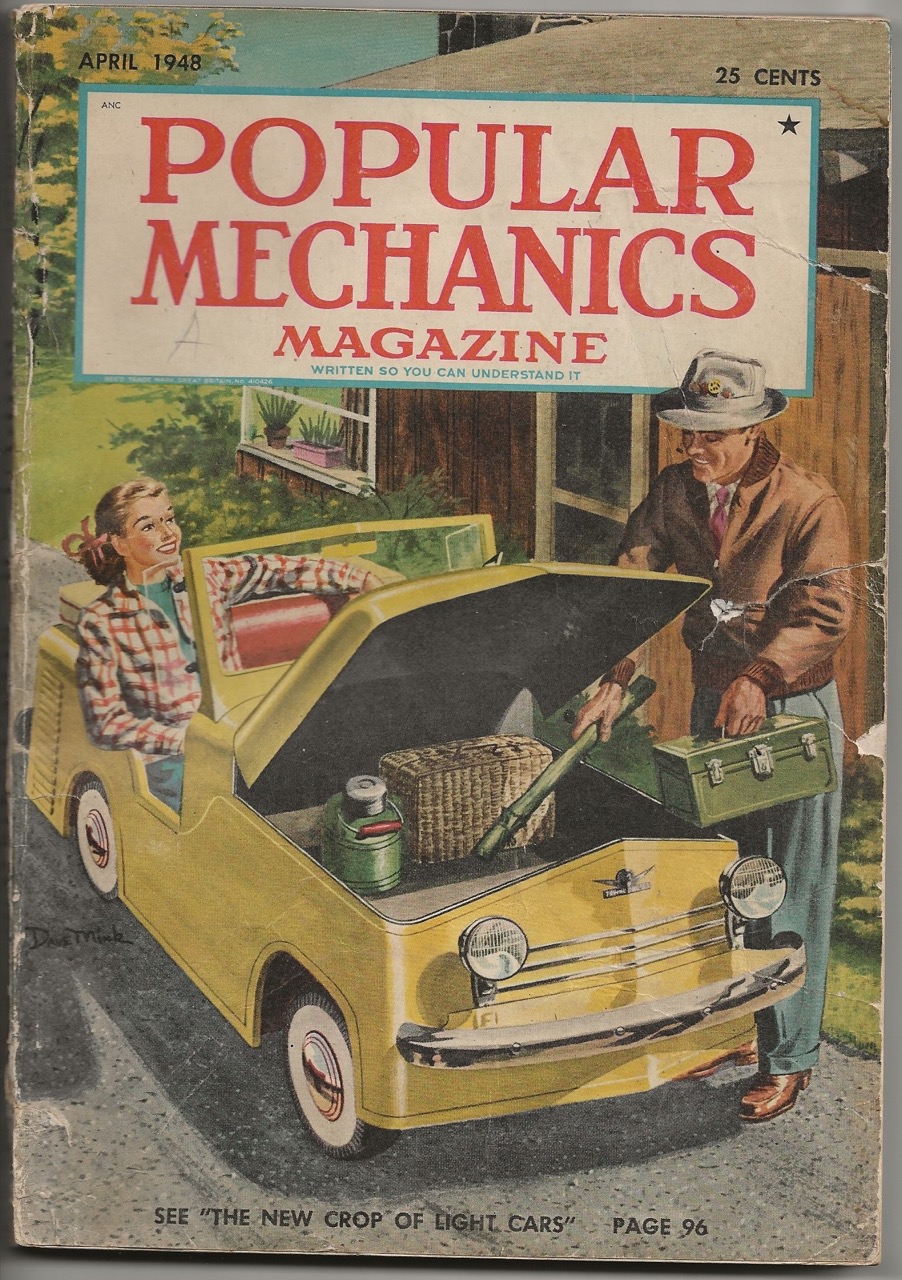 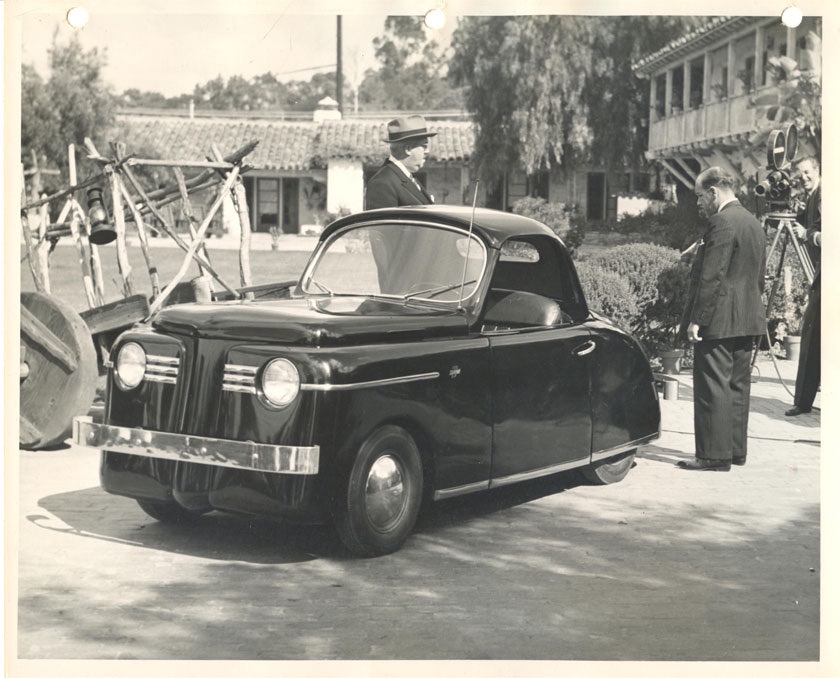 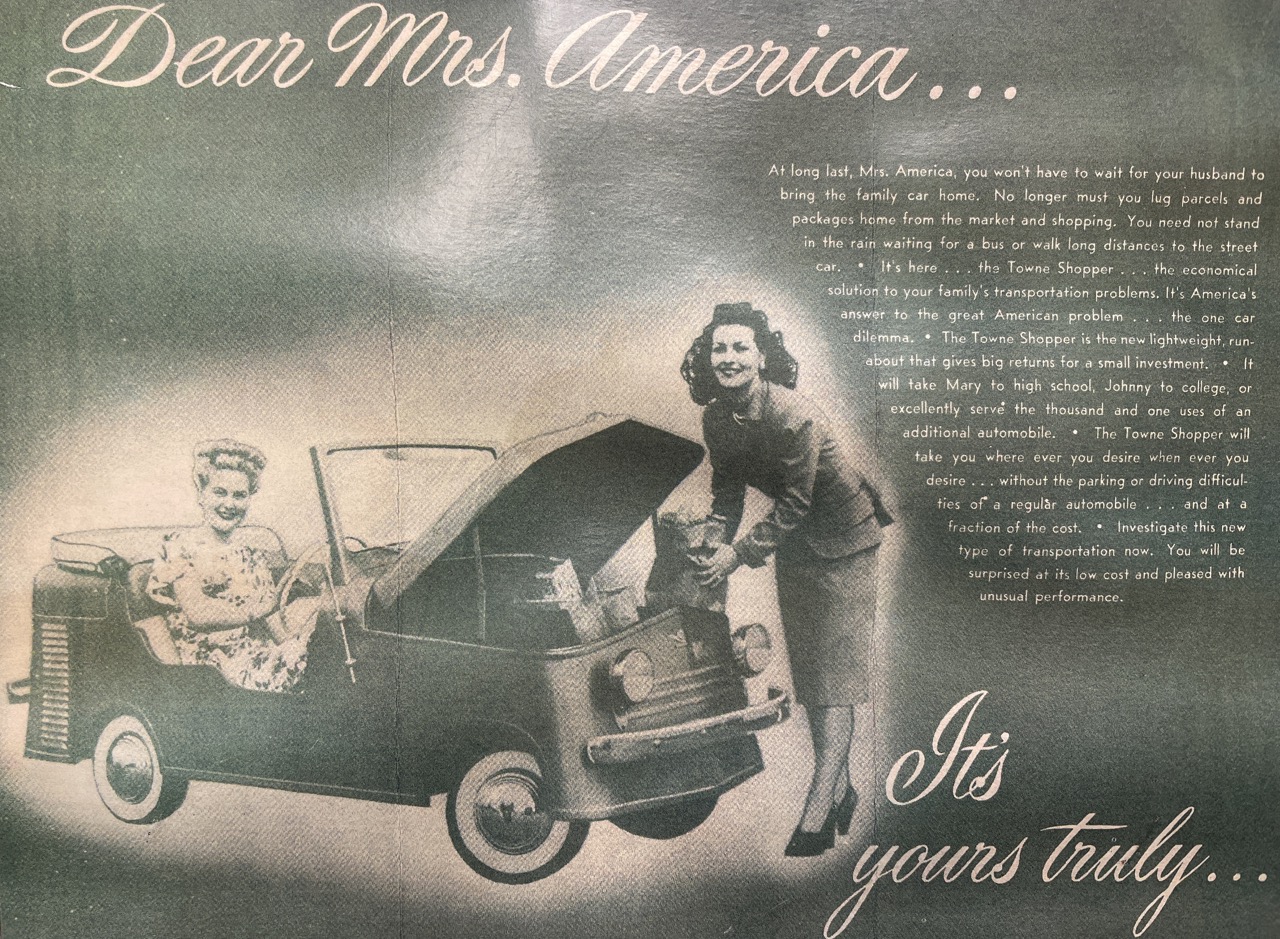 We now think the unrestored rear-engined car in our shop, the Towne Shopper, was the prototype, and the one that was used in all the promotional materials and photo shoots. 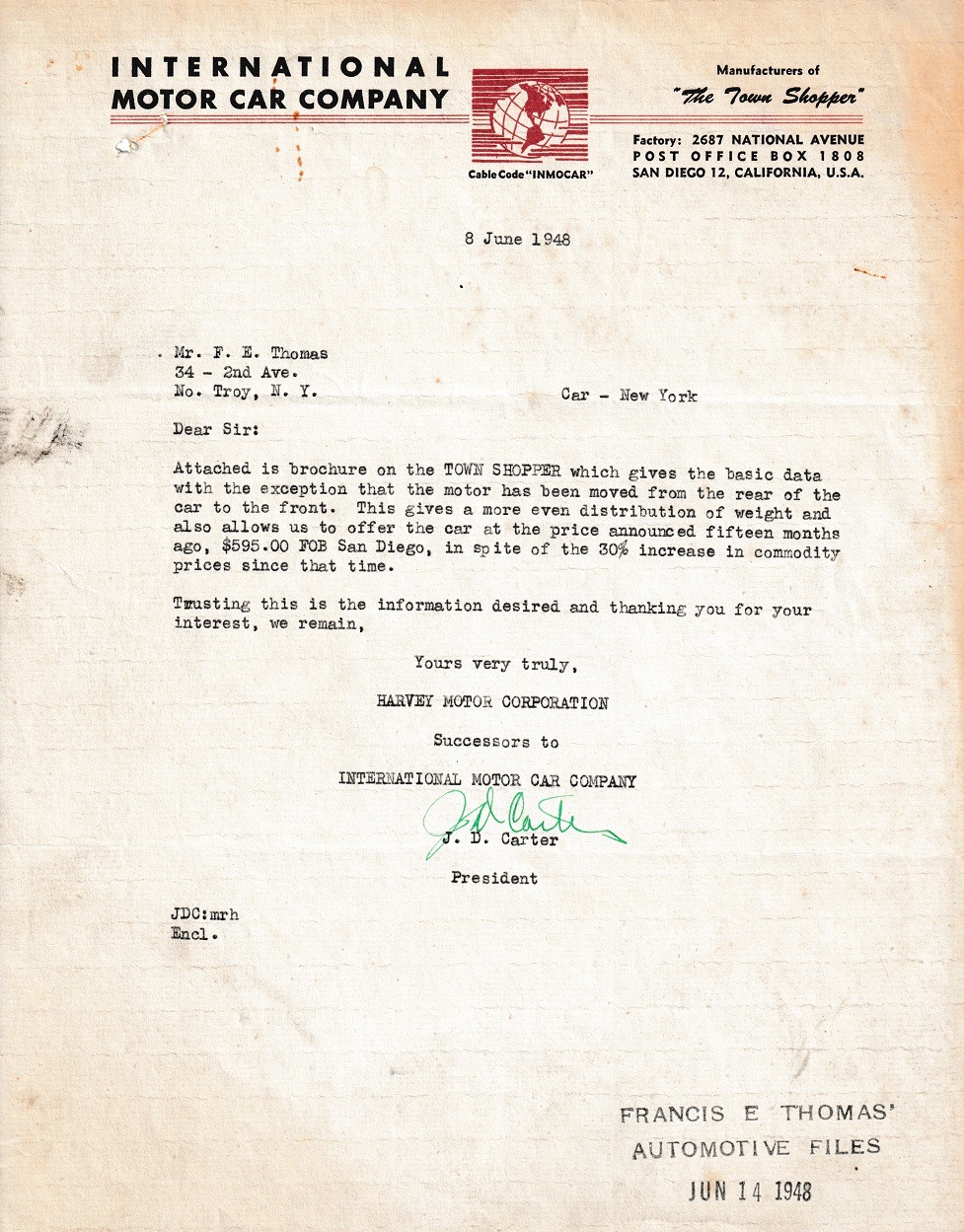 In addition to press releases and pictures that came with the red Carter, there were type-written letters addressed to a couple of folks who had inquired about the car.

According to the letter addressed to a Mr. Francis Thomas, by June of 1948, J.D. Carter was now the President of the company, and it had changed its name to the Harvey Motor Corporation. The letter mentions, rather casually, that the attached brochure “gives the basic data with the exception that the motor has been moved from the rear of the car to the front.” The letter goes onto to say that the price remains the same, at $595. 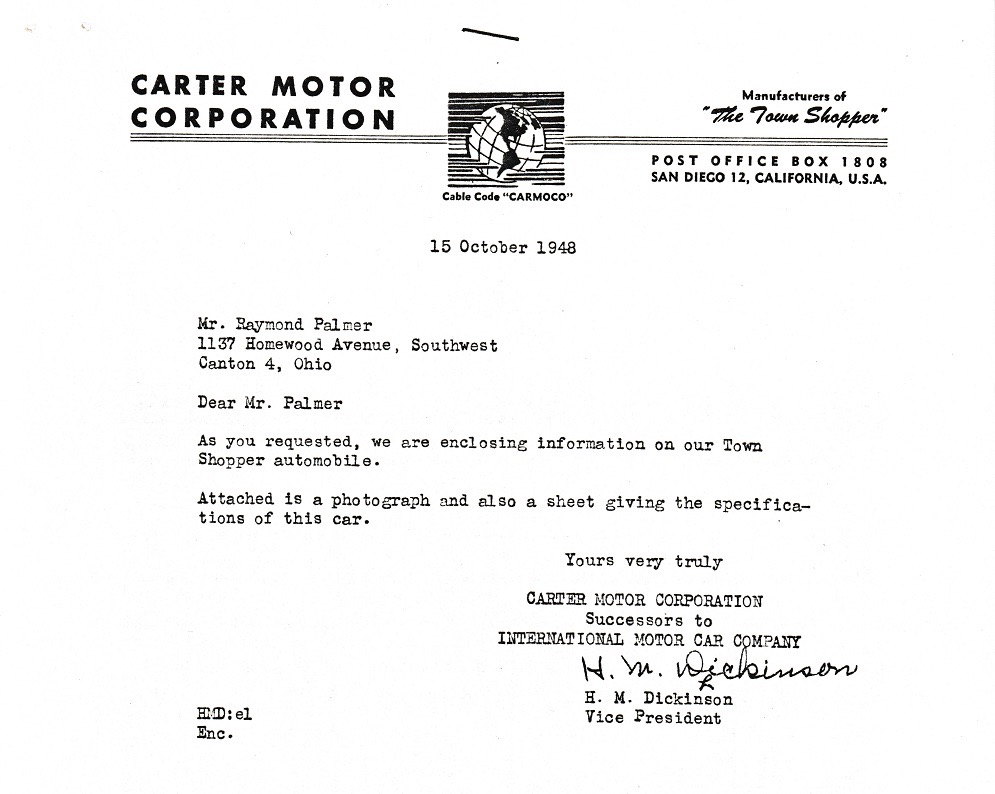 However, by the time a Mr. Raymond Palmer had inquired about the car in October of 1948, the company had changed names yet again, to the Carter Motor Corporation, with a H.M. Dickinson listed as Vice President. The letter head changed as well, with the physical address being omitted, and just a listing for a post office box. This is highly sus, amirite fellow kids? Changing names three times in the span of 10 months should have put everyone working there on high alert. 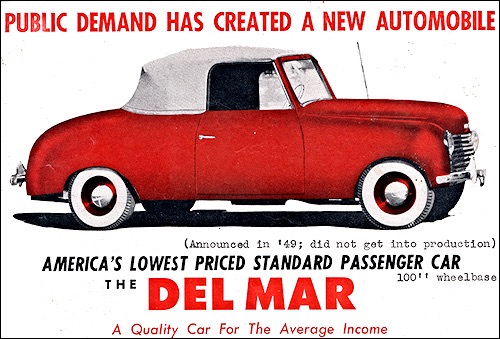 Museum friend Malcolm Pearson, who runs the website Makes That Didn’t Make It, believes that S.A. Williams went on to develop the Del Mar automobile, also located in San Diego. Mal sent me this timeline of the Del Mar:

“The Del Mar was introduced to the public on Valentine’s Day 1949, roughly 10 months after Williams left IMC. Del Mar’s president was Arthur Cooksey. It was announced that it would be produced at the same Convair plant Williams had leased in 1946.

After Keller Motors went under at the beginning of 1950, Arthur Cooksey bought the rights to the Keller name and secured an agreement to lease the Redstone Arsenal factory space.” 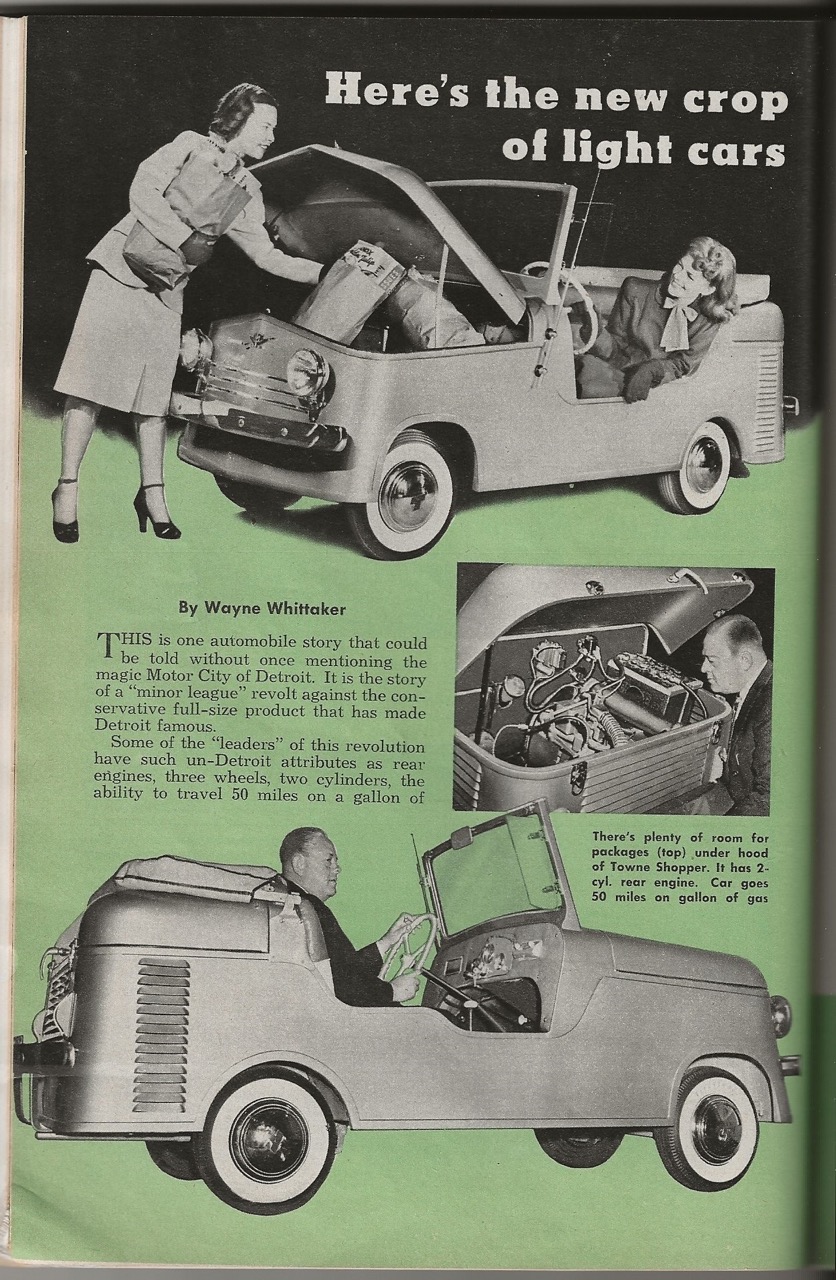 The trail goes cold here, but as we restore the Towne Shopper, and continue to investigate the fate of Mr. Williams and his various start-ups, I’ll be sure to update this story.