I’m flying to the middle of nowhere, Australia — pretty much right now — to fix a 1969 Chrysler Valiant Ute that a reader I’ve never met bought on my behalf for $900. It’s a total of about 20 hours flying time from Detroit to Sydney, then some time on a bus to central station, then another seven-ish hours to the town nearest my Ute: Dubbo. Because I’ll have to carry my luggage around during the trek, and because I’m too cheap to pay a bunch for luggage, I’ve limited myself to just a single bag of tools to accompany my check-in of car parts. Here are the tools I strategically chose for this small “bugout bag” and why I think they’ll suffice for the vast majority of my wrenching needs.

As perhaps some of you are aware, I spend a lot of my time in junkyards. I’d say I visit a ‘yard, on average, twice a week. Has it contributed to a rather suboptimal social life? You could make that argument; but you can’t make the argument that I don’t score smokin’ hot deals on car parts. Because I do. Anyway, this junkyard-wrenching has forced me to have a “bugout bag” ready — a collection of only the most essential tools that can accomplish the vast majority of the wrenching I need to do, but that doesn’t weigh so much that I’ll pull a muscle on my way from my truck to the junkyard wheelbarrow.

After years of laying on my back at a salvage yard regretting having forgotten my shears or my pry bar or my cheater bar, I’ve refined my bugout bag to the point where I can snag whichever part I need without having to head back home for tools. So with that in mind, here’s a look at what I’m going to try to get through Australian customs. These are my bare essentials:

We’ll first start with a can of PB Blaster, or “Cleveland’s Finest” as I like to call it. Whether it’s more of a placebo than an actual penetrating lubricant that makes it easier to loosen bolts, I don’t really know, but I will say that I love the stuff. Especially in the rust-filled ‘yards of Michigan, a can of “Jesus Juice” is something I can’t leave at home; given the state of my Utes, I bet I’ll have to use at least some of this (though I bet the rust in Australia, as bad as it looks, is mostly just superficial compared to Michigan rot). 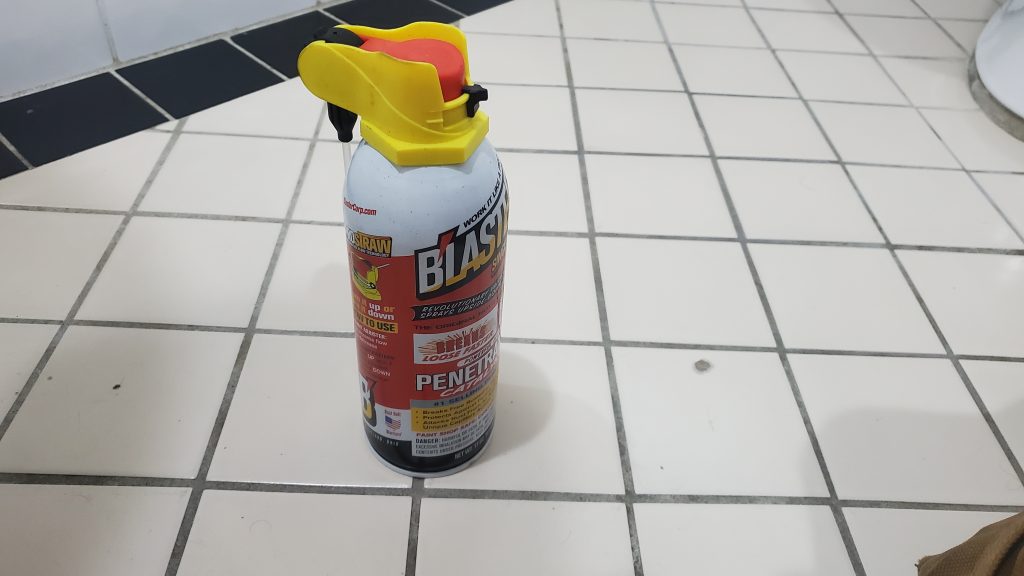 Next up is a set of shears. These can do everything a set of wire-snippers can, but they can also slice things like brake hoses, brake lines, radiator hoses, and thin sheetmetal. The versatility of shears should never be doubted. 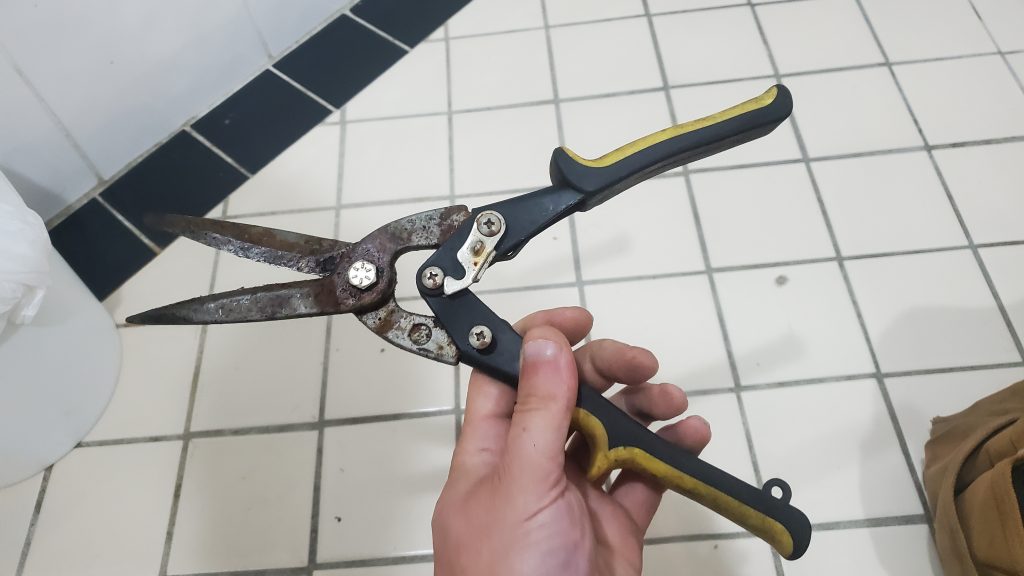 Possibly the second most important tool in a wrencher’s tool set, behind a good flathead screwdriver, is a set of swivel-head ratcheting wrenches. How I wrenched for nearly a decade without these is beyond me. There are so many occasions where a socket just won’t fit, and a standard wrench would take 500 years as you twist, remove, rotate, install, twist, remove, rotate, install, twist, etc. The swivel-head ratcheting wrench takes care of this; it’s an amazing contraption. 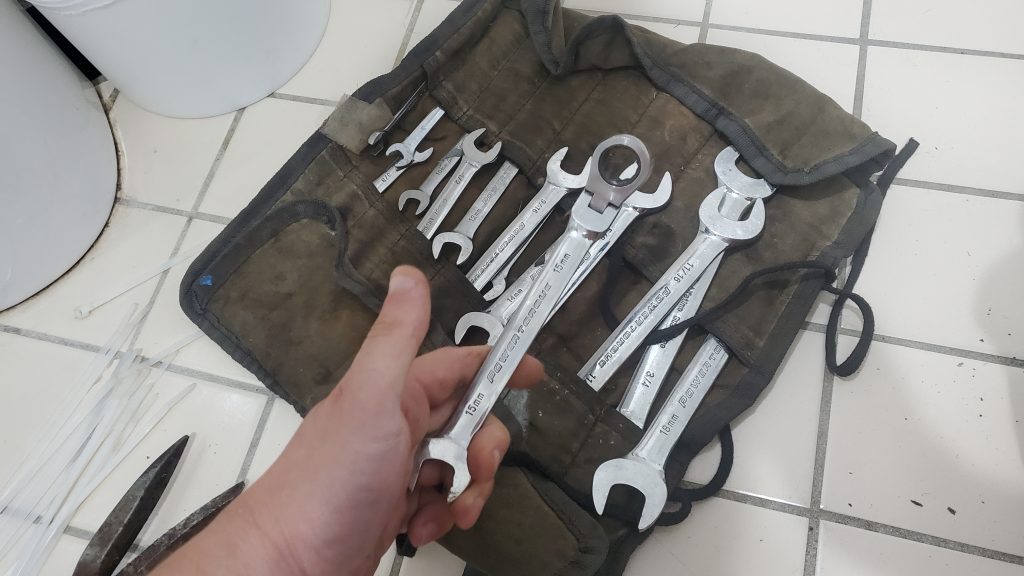 A tool that I probably could have just bought in Australia, but that I bring with me anytime I’m fixing something (I don’t bring this to the junkyard) is a roll of friction tape. Electrical tape is crucial when fixing an old car, but the problem is that it’s adhesive-based, and therefore doesn’t really work to fix a leak. Friction tape adheres to itself; stretch it tight and wrap it around itself, and it forms a great waterproof bond. 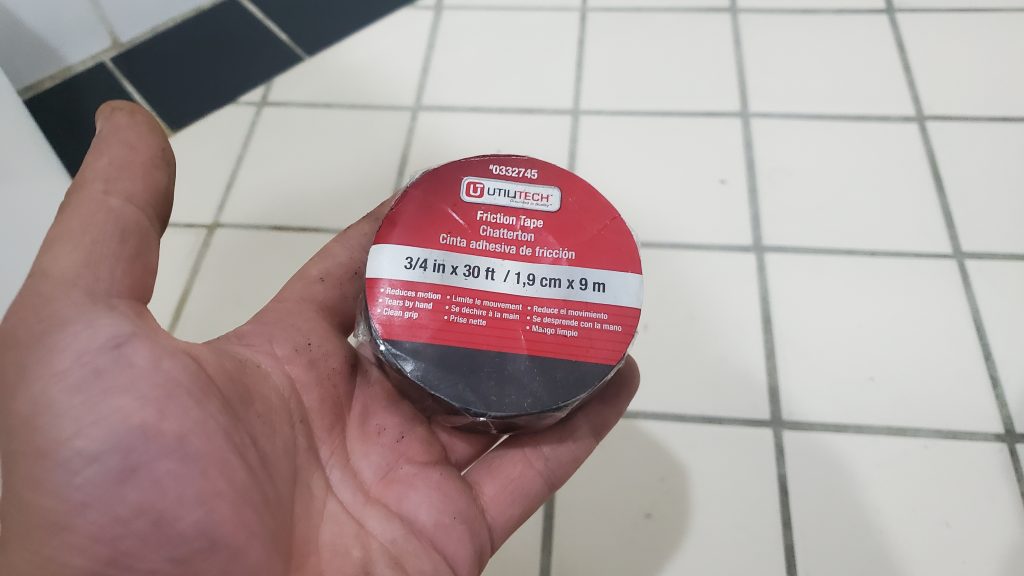 Speaking of electrical tape, I always bring a set of wire strippers/crimpers when I’m mending something. I’ll snag some splice connectors when I’m in Oz, but something tells me this tool is going to see some heavy use as I try to get this ute up and running: 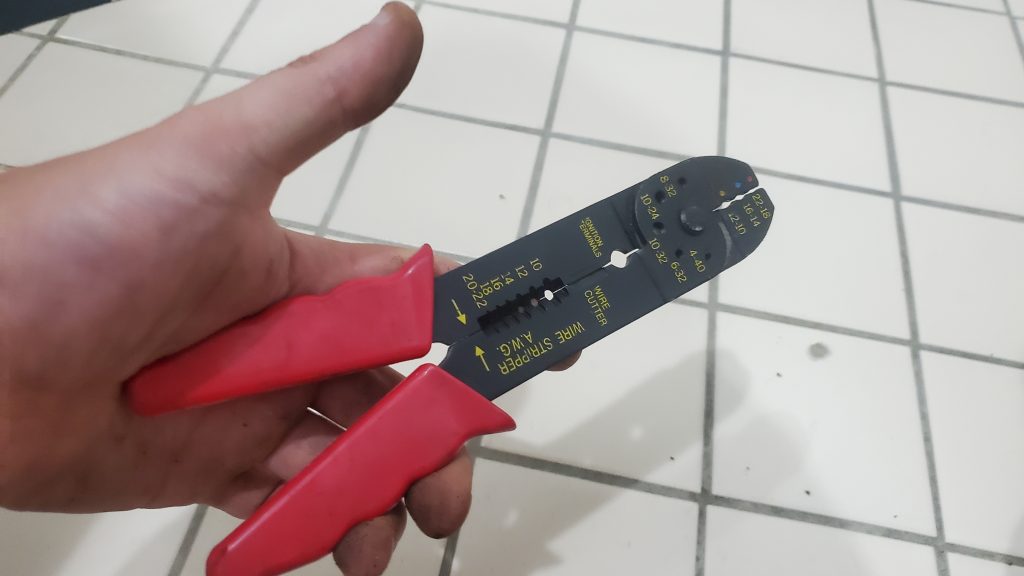 I could have bought these in Australia, but they’re lightweight and low-volume, plus extremely important: Zipties: 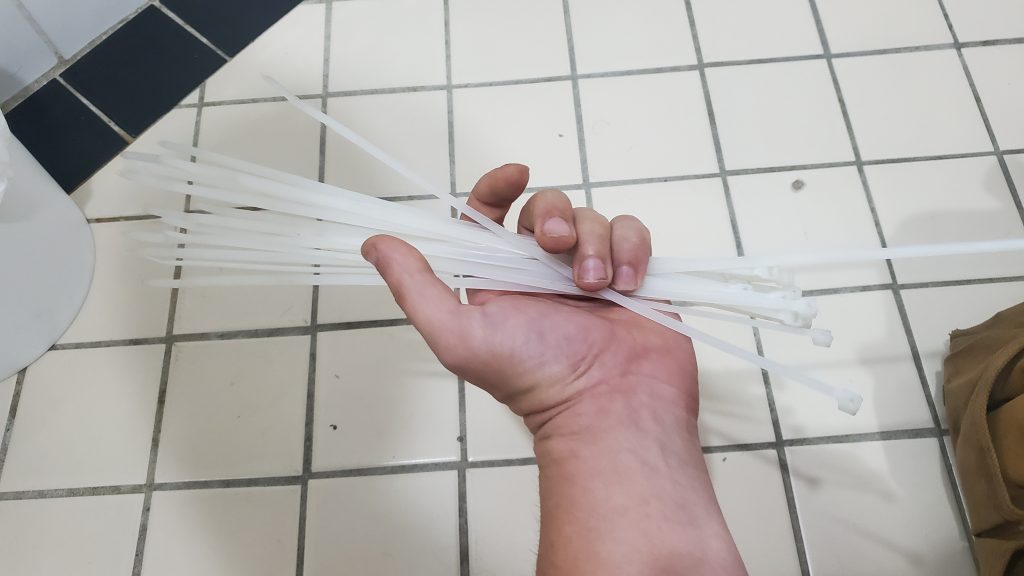 An underrated tool in any wrenching aresnal is the headlamp. Don’t waste your time with a flashlight, as you have to give up 50 percent of your hands to wield one. Headlamps are the answer: 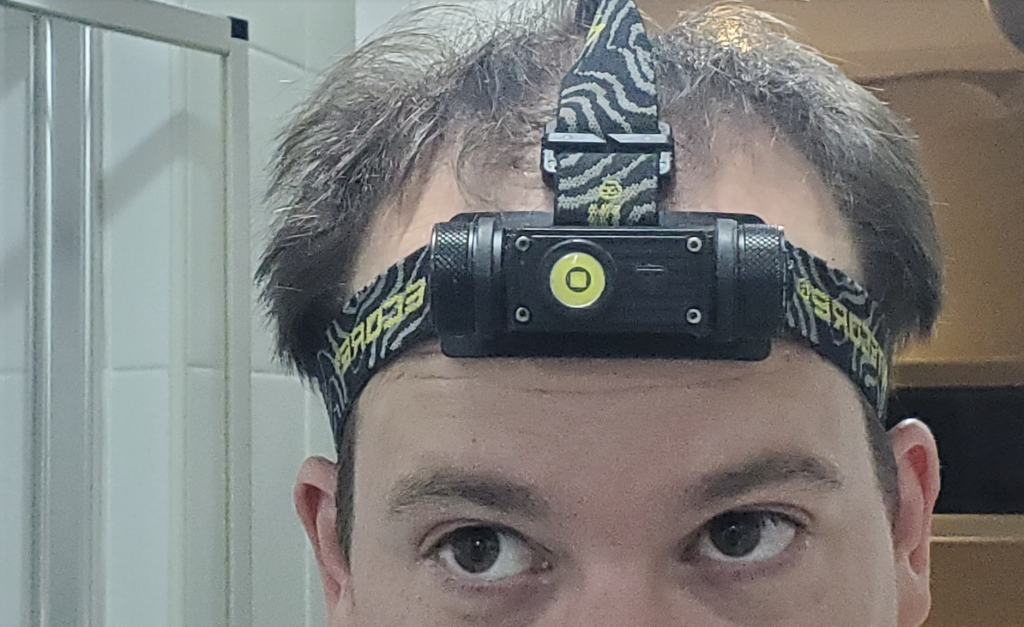 Sometimes you have to service brakes, and that means bleeding. The cheapest and easiest way to do this is to have a friend step on the pedal while you — with nothing but a hose and wrench (and maybe an old coke bottle to catch the fluid) manipulate the bleeder screw at the caliper (or in my case, wheel cylinder). But when there’s no friend there to help, look no further than the Bleed-O-Matic bleeder kit. It’s small, cheap, and I use it often: 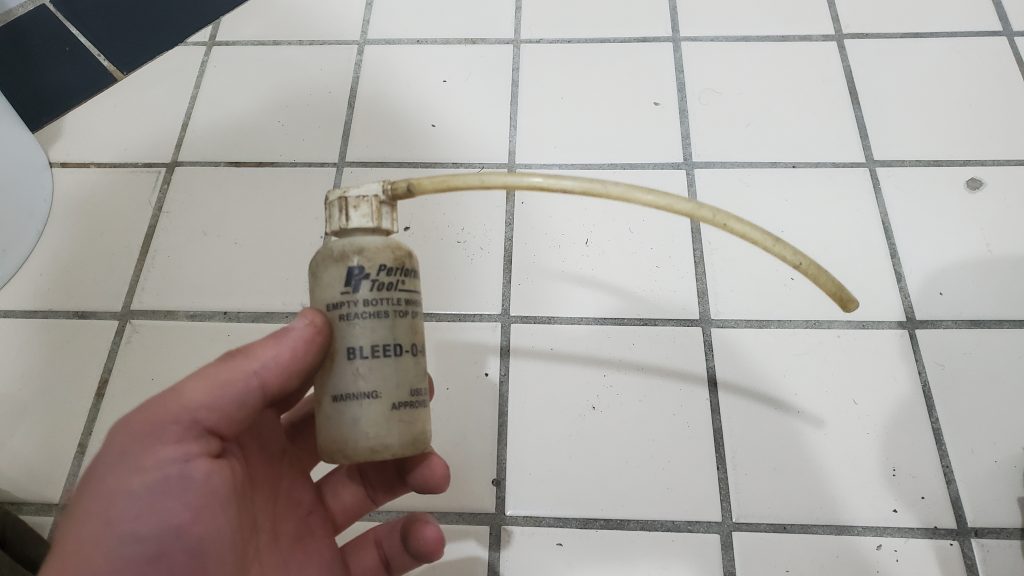 Sometimes you need to grip things really tightly and twist them or bend them. If you break a screw, for example, you might want to grab what’s left of the shank and rotate it out. There’s really only one tool for that job, and it’s the vice grip. I bring a wide one and a narrow one everywhere I go: 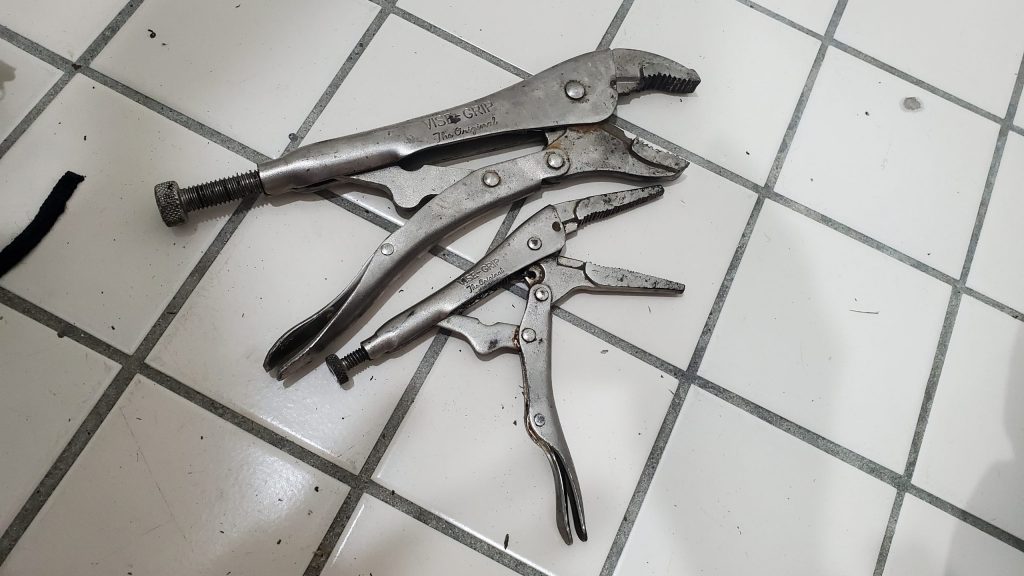 Also important are channel locks. I use them to get big spring clamps off, and sometimes to yank stubborn radiator hoses off of radiators/thermostat housings: 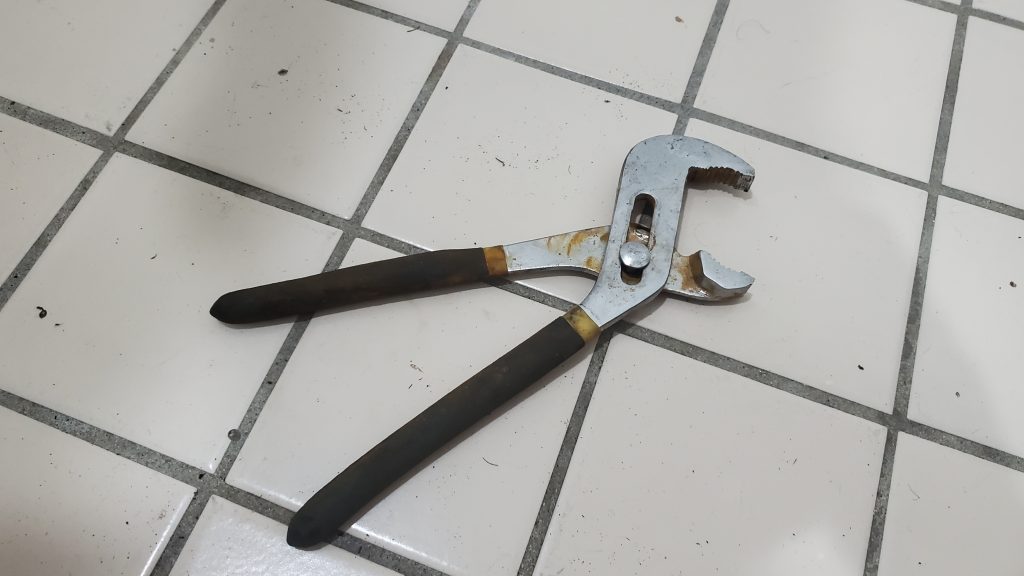 Line wrenches. Flare nut wrenches. Whatever you like to call them, these five-sided wrenches are must-haves for brake lines and fuel lines. They’re not all made the same either; especially for the smaller 3/8 and 7/16 fittings, you must make sure you have a high-quality one that fits tightly around the nut, otherwise you’ll strip it. Ask me how I know. 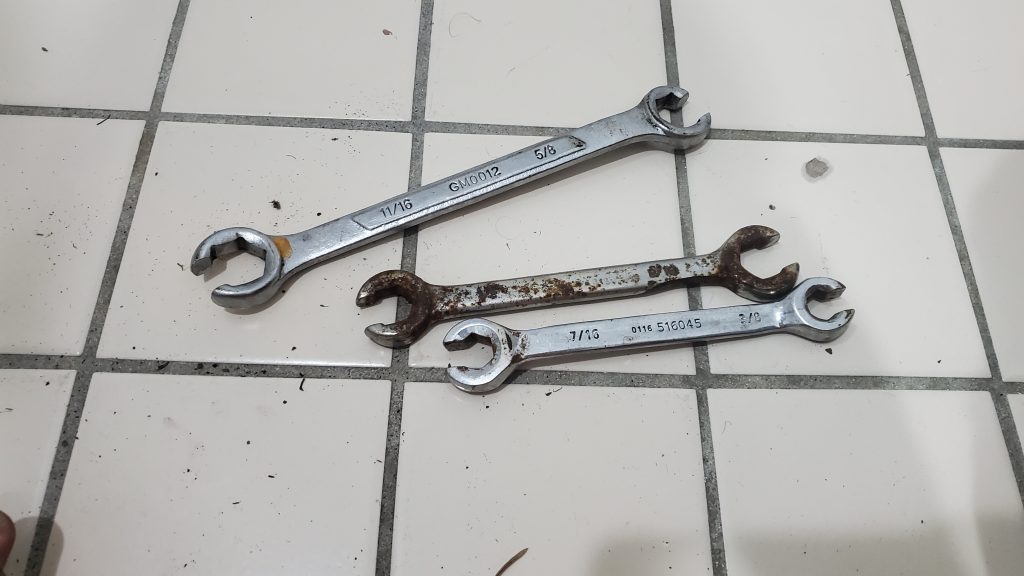 Speaking of brakes, I brought a drum brake tool, because using a set of pliers to compress the springs that hold the brake shoes against the backing plate is a pain in the ass. I don’t have time to waste, so I brought the right tool for the job. 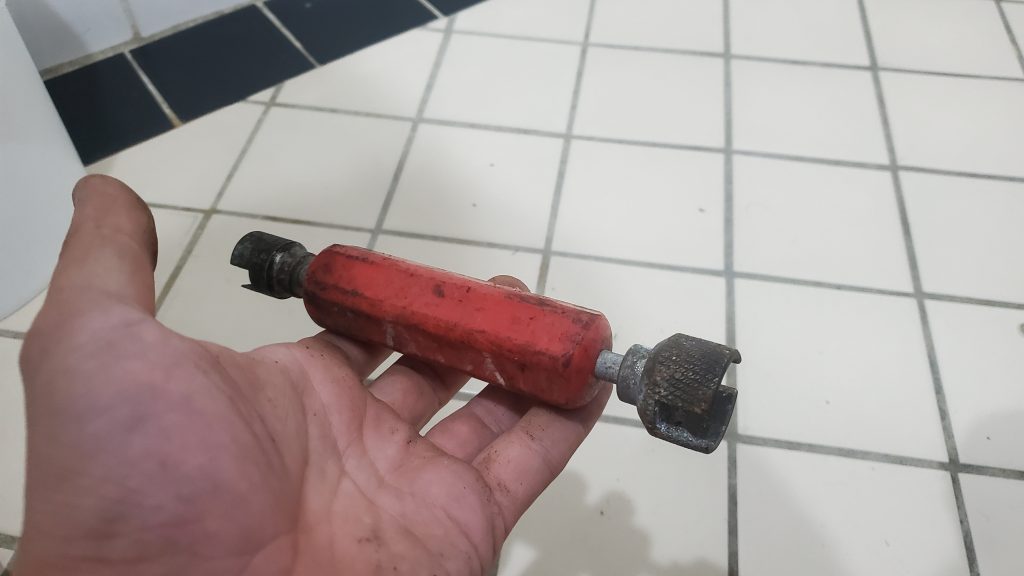 I always have an assortment of extensions read to go, and I always make sure to have adapters, should I not have the right ratchet on-hand. Plus, I bring the standard spark plug socket-sizes: 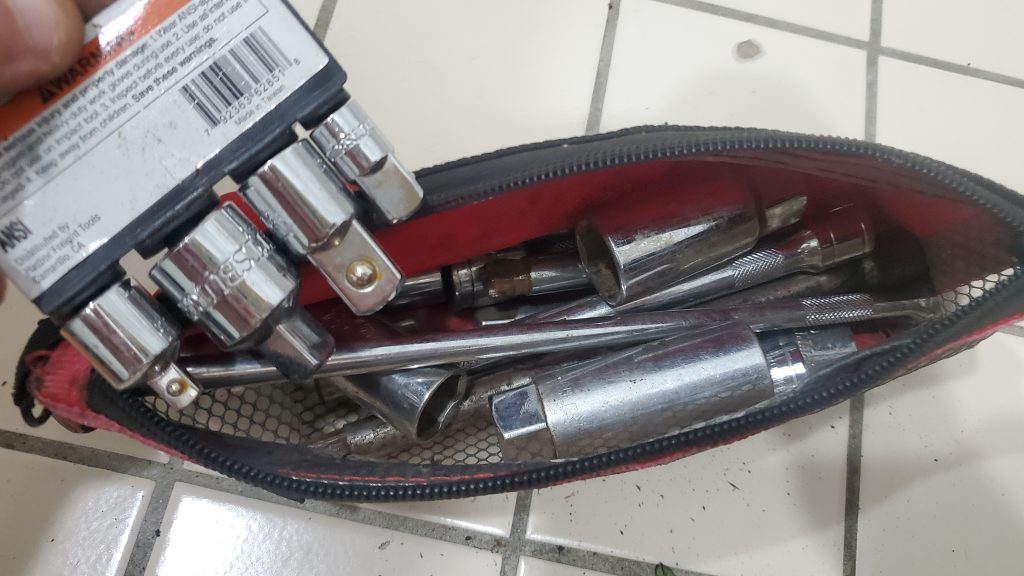 Magnets have saved my ass far too many times for me to leave mine at home. If you drop a little bolt into a tight abyss, how else will you retrieve it? 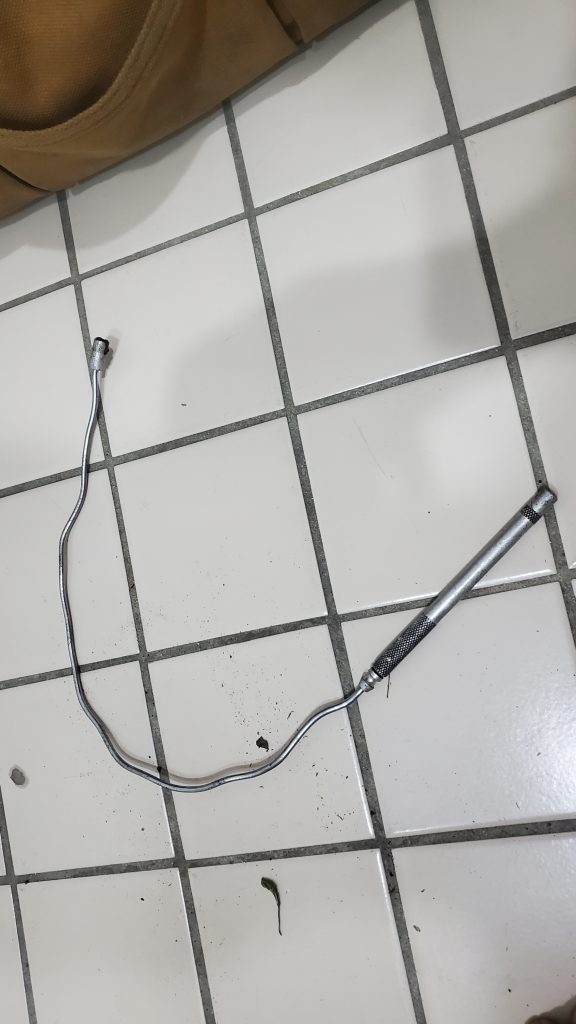 I always bring a few ratchets with me. My current favorite is my 3/8-drive-1/4-drive combination ratchet from Harbor Freight. Not only does it allow me to use either 1/4 or 3/8-drive sockets, but it also has an extendable handle built in for extra leverage. I also ended up bringing a spare SK 3/8-drive ratchet because it’s just such a good tool. I could have left it at home, but ratchets are usually the most-used tools in any car project, and having a high-quality one on hand is just nice. I also brought a half-inch drive ratchet: 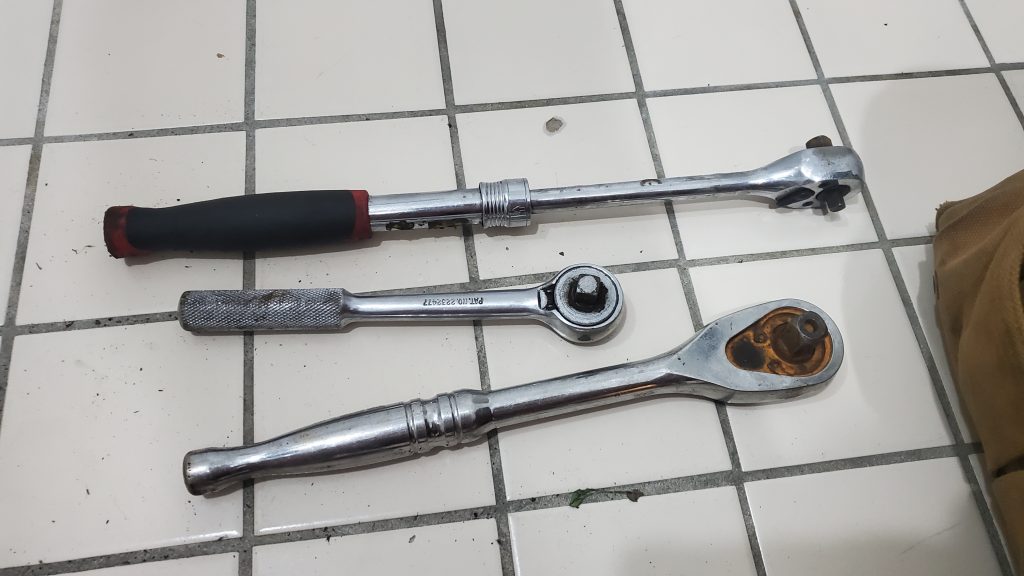 To go along with my ratchets, I always have along for the ride the tail end of a turkey baster. It’s thin sheetmetal, so it’s light, but its moment of inertia about its bending axis is large, so it does a great job as a cheater bar for extra leverage. 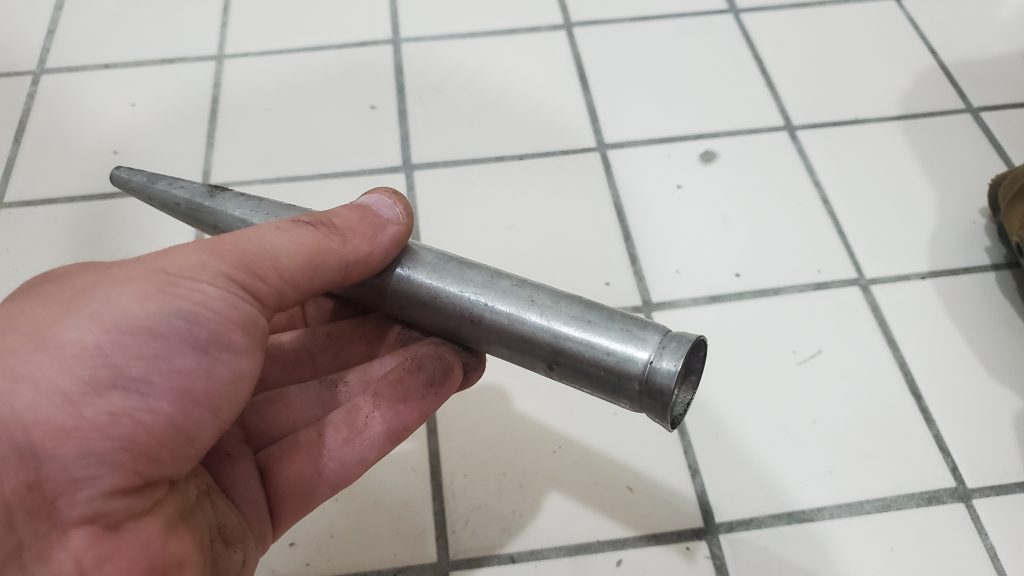 I also bring an adjustable wrench in case I don’t have the right socket on hand. Yes, they’re known to round bolts, but they’re incredibly versatile: 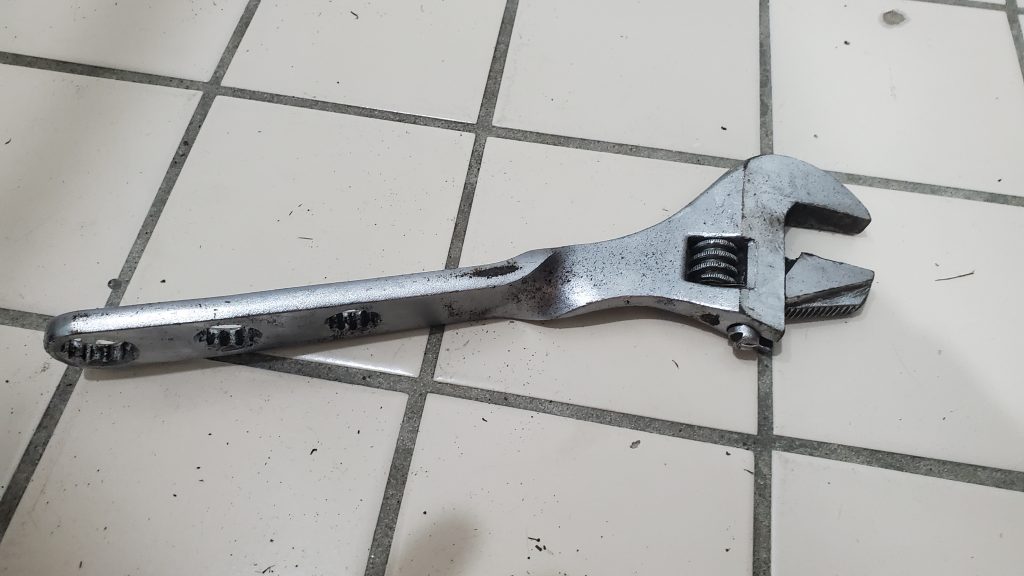 I brought my favorite screwdrivers. I could have bought some in Australia, but these — specifically “Big Orange,” which has helped me through some seriously arduous projects — are my favorites. Also, a tiny pick: Far more important than you’d think. Sometimes you have to manipulate something small, and a pick is the only thing that will do. The item shown below with a black handle is a trim removal tool; this is the ultimate solution to the problem of breaking plastic parts, though I don’t know if any of my utes even have any trim left: 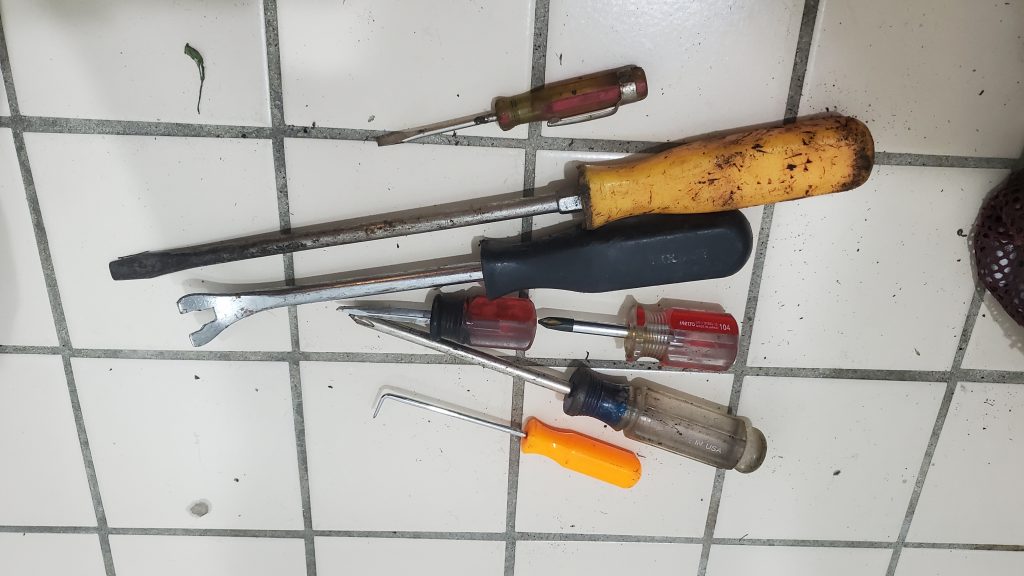 I brought a small bag of 1/4-inch drive sockets and an extra small ratchet. Tiny sockets are important and easily misplaced, so having a set with me is just a smart move. 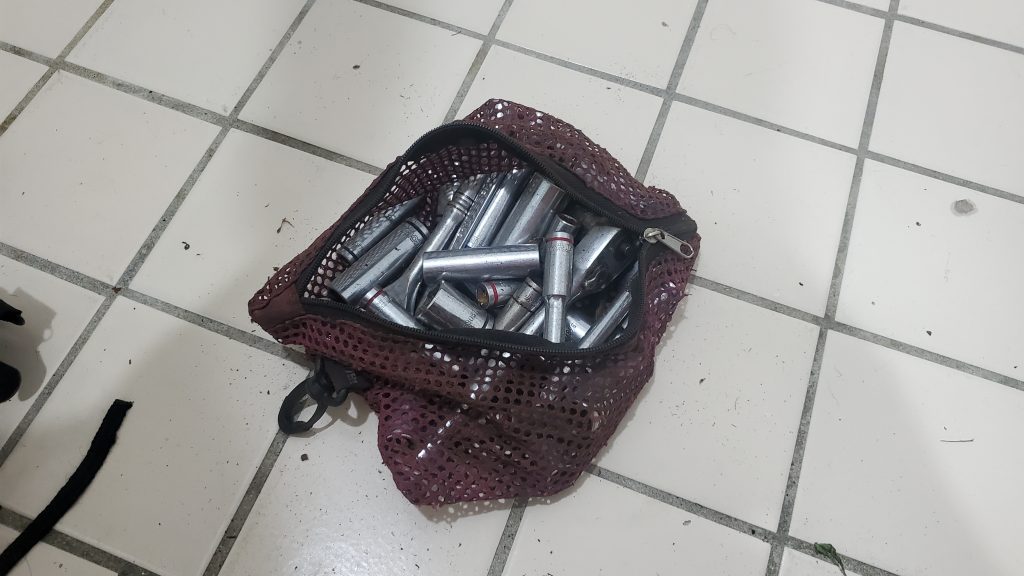 I also have a bunch of torx and allen wrenches with me in a small bag, along with Irwin bolt extractors for when I round a bolt on a rusty ute: 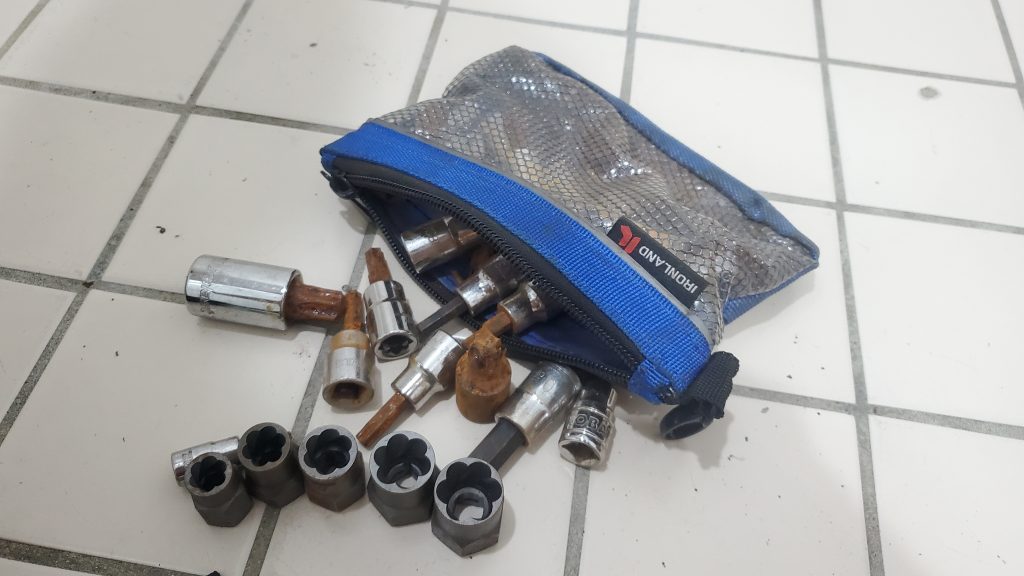 Pry bars fall on the other side of the spectrum as the tiny pick I mentioned before. It’s not about manipulating something delicate, it’s about forcing something to yield to your will through sheer force-multiplication: 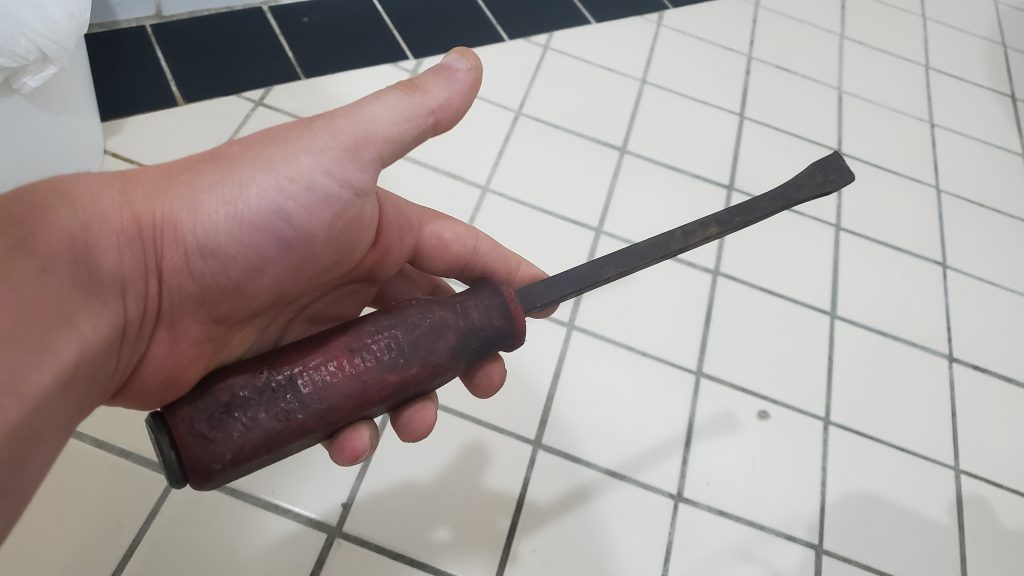 I always have some gasket maker on me, should I have a leak somewhere: 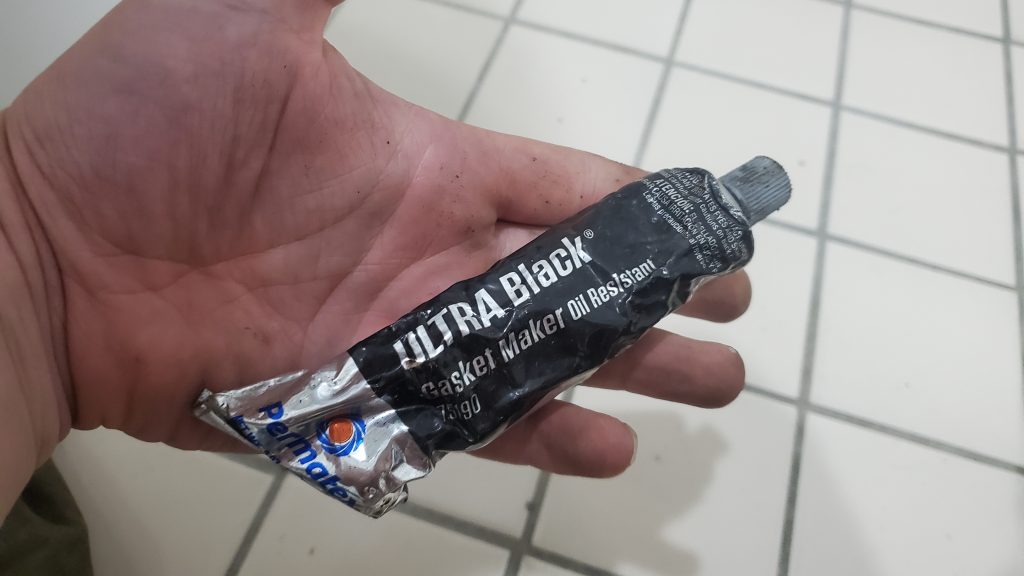 And of course, I have in my bag a few spare English wrenches, since Valiants Utes are not held together with metric fasteners: 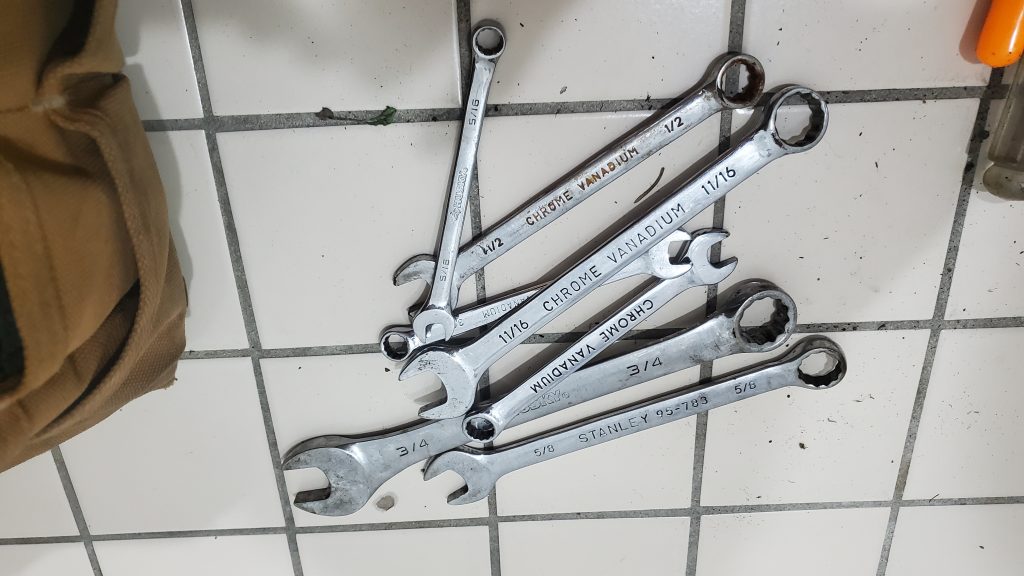 In addition, I snagged a few of the most popular 1/2-inch drive English sockets: 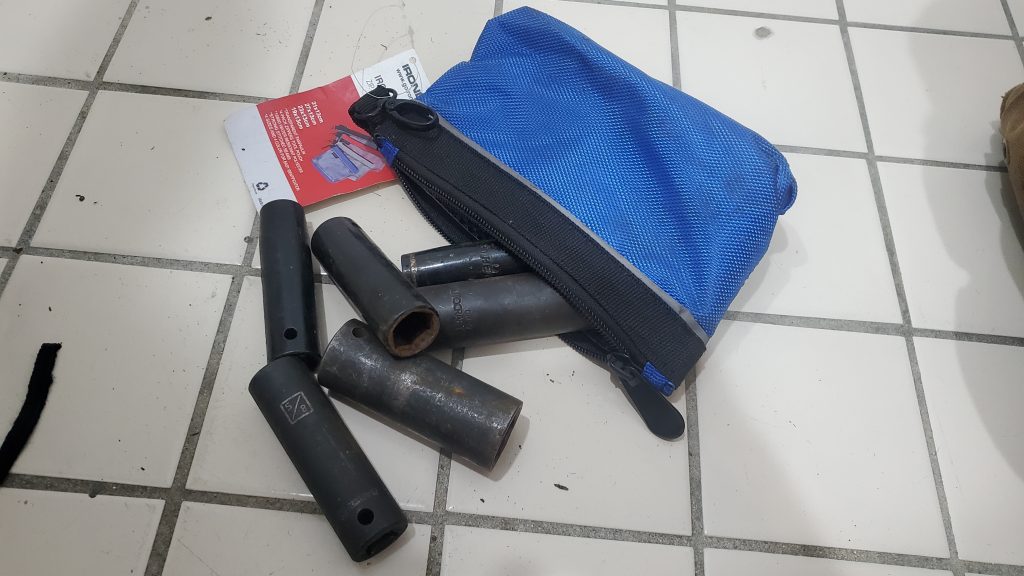 You’ll notice a few things missing (Of course, big things like welders I’ll have to borrow from my host, Laurence). There’s no hammer and no socket set. These I’ll buy once I’m in Australia, as the hammer is a cheap and ubiquitous tool that’s too heavy to justify hauling across the world. The socket set is large and also ubiquitous; I should have no issue picking up a 3/8-drive set in Oz. I’d also like to snag a gasket scraper (the ones that use replaceable razors are best), a roll of electrical tape, some wires, maybe some epoxy (JB weld), and a few other odds and ends, but I’ll snag all of that when I’m there.

Otherwise I think this 35 pound bugout bag of mine will set me up for damn-near anything my ute will throw my way.