Facebook-f Twitter Instagram Rss
Menu
Menu
Home » You Can Buy A Tiny Helicopter That Costs Just $35,000 And Could Fit In Some Garages

You Can Buy A Tiny Helicopter That Costs Just $35,000 And Could Fit In Some Garages

Reaching American shores this summer is an adorable and sort of inexpensive way to get into aviation. The Mirocopter SCH-2A is a helicopter that weighs just 249 pounds, costs less than the average new car, and fits into some garages. It’s a neat little flying contraption, even if you’re limited in how you can fly it.

Throughout my years of loving aviation there has been one thought that has always been around: Flying is expensive! The cost to become a private pilot could run you about $10,000, more if it takes you longer than 40 hours of instruction. Should you choose to buy a plane, you’ll quickly find out that even a 60-year-old Cessna 150 can set you back more than $30,000, and that’s not counting fueling or maintaining the thing. If you’re like me, you can rent a plane, but you’ll still see a few hundred dollars disappear from your pockets a couple of hours at a time.

One way to make flying cheaper and more accessible is to go with an ultralight. You can still get your aviation kick, but from behind the controls of a cheaper, bite-sized machine. As I witnessed at the humongous EAA AirVenture Oshkosh airshow this year, there are all kinds of lightweight aircraft that you can buy.

Some vehicles are powered parachutes, some are trikes married to hang gliders, some are hot-air balloons or gliders, and some ultralights are fixed-wing planes, just scaled down. If you prefer your flying in rotorcraft flavor, you can find those, too!

One of these rotorcraft is the Mirocopter SCH-2A, and its goal is to be one of the lightest and cheapest helicopters you could buy. It was at Oshkosh this year, but I ran out of time and didn’t get to see it. The first ones are arriving in America, and they actually seem really fun. 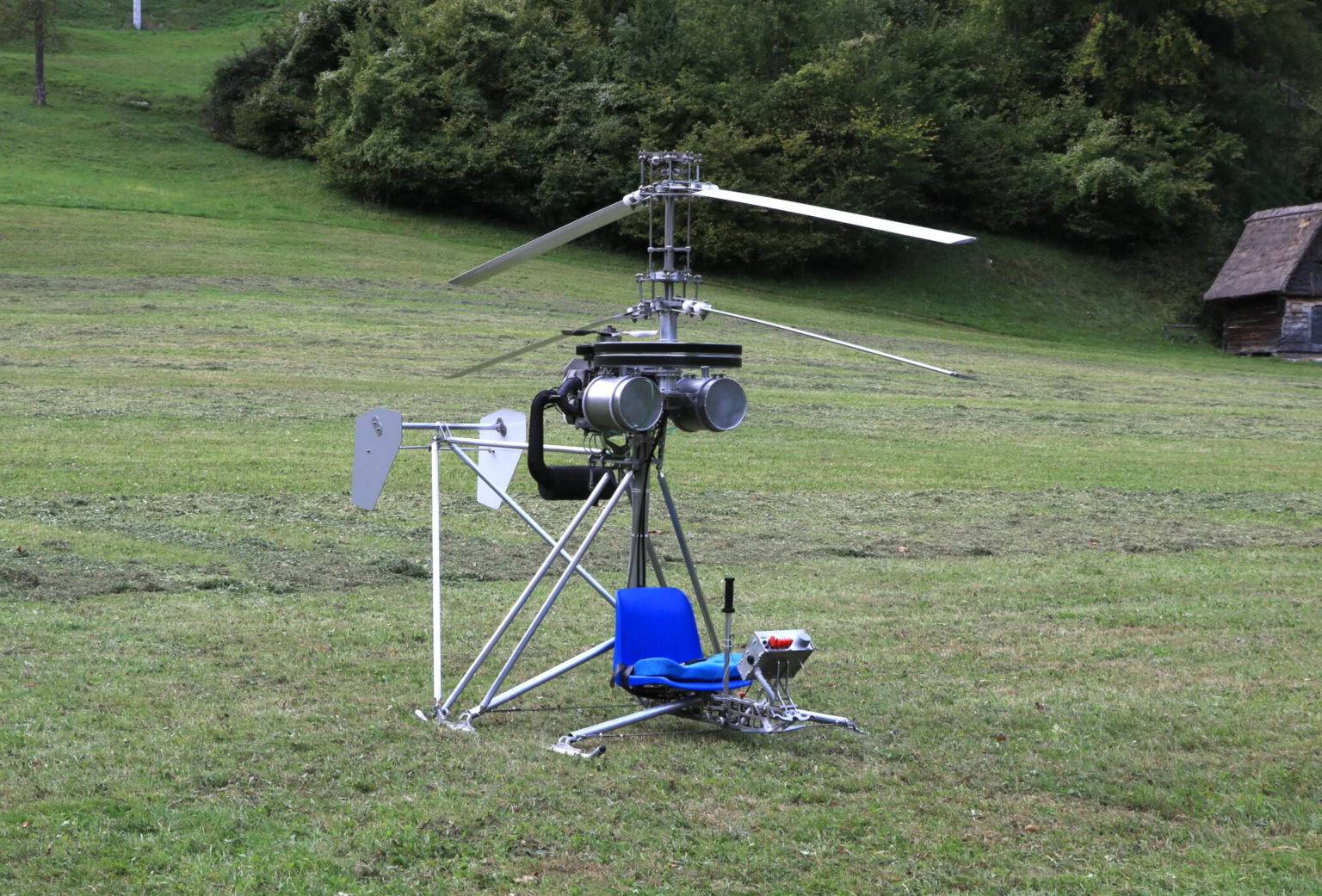 The Mirocopter SCH-2A is the work of Slovenian engineer Miroslav Črv. His company, Mirocopter, claims that the SCH-2A is “one of the lightest manned coaxial helicopters in the world.” Its tiny footprint means it qualifies as an ultralight here in America. We’ll get to that a little later, but it means that you do not need a license to fly it.

Mirocopter says the SCH-2A has been tested for more than a decade, and now it’s ready to go on sale. There are already two distributors in the States and one has already come up for sale for $35,000.

The Mirocopter SCH-2A is a coaxial helicopter. What that means is that you get a pair of helicopter rotors mounted one above the other and driven by concentric driveshafts. They have the same axis of rotation, but turn in opposite directions.

When a helicopter’s rotor blades turn, torque is exerted in the opposite direction of the rotor. In the helicopters that you might be used to seeing, a tail rotor is used to counteract the torque. Without that tail rotor, you’ll likely start spinning around.

Here, the rotor spinning in the opposite direction provides the countering force. The basic concept of coaxial rotors has actually been around for over 200 years. One example of this is a device made by Mikhail V. Lomonosov in 1754 that used coaxial rotors to lift instruments into the air.

The engine of the chopper is a Fiate MZ202 two-cylinder, dual-ignition, two-stroke engine. 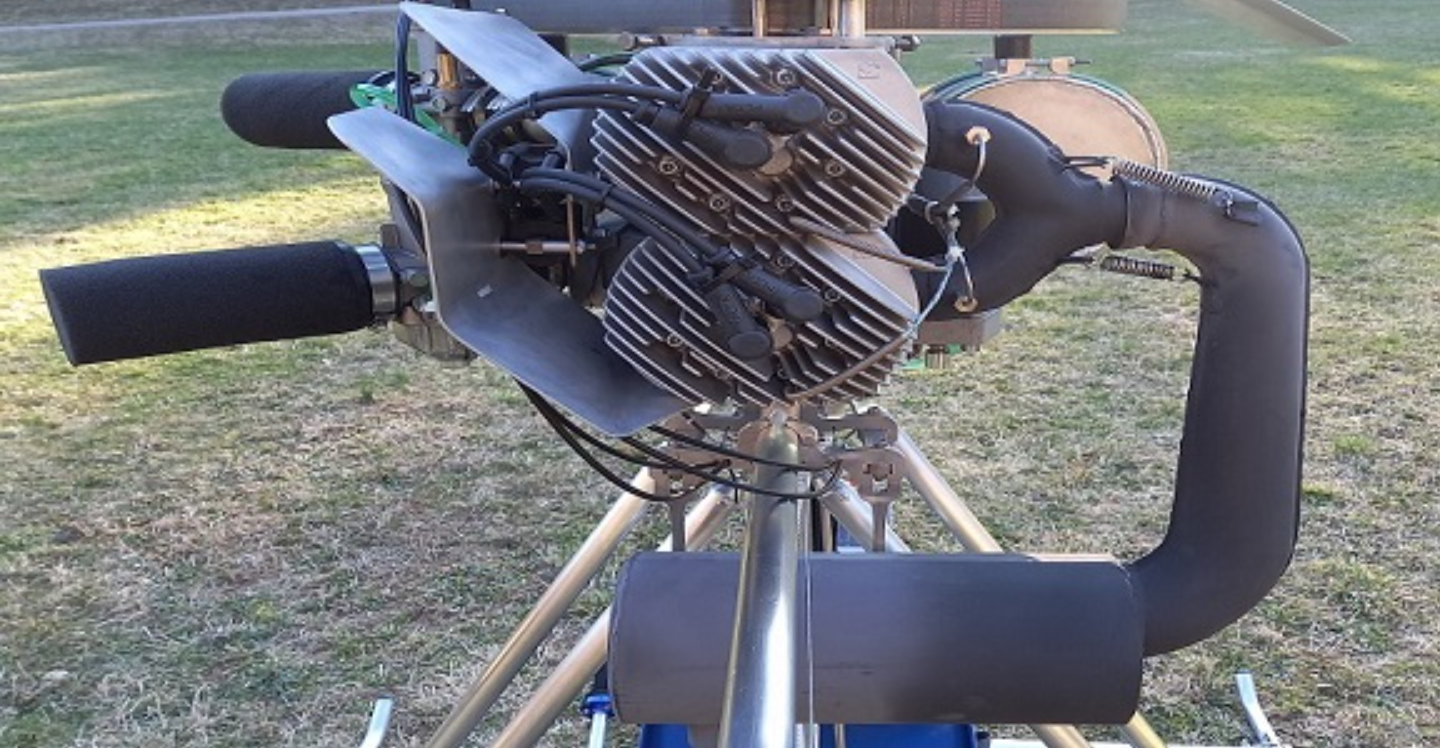 This engine is made in China and is advertised by Mirocopter as making “over 60 HP.” That engine, including its cooling system, is said to weigh just 66 pounds. It spins NACA 0012 aluminum composite rotor blades featuring stainless steel bars for rotor blade reinforcement and balance. Mirocopter says that these blades have a safety factor of higher than three.

You command the thing from standard helicopter controls and get your information from a 7-inch digital instrument panel. 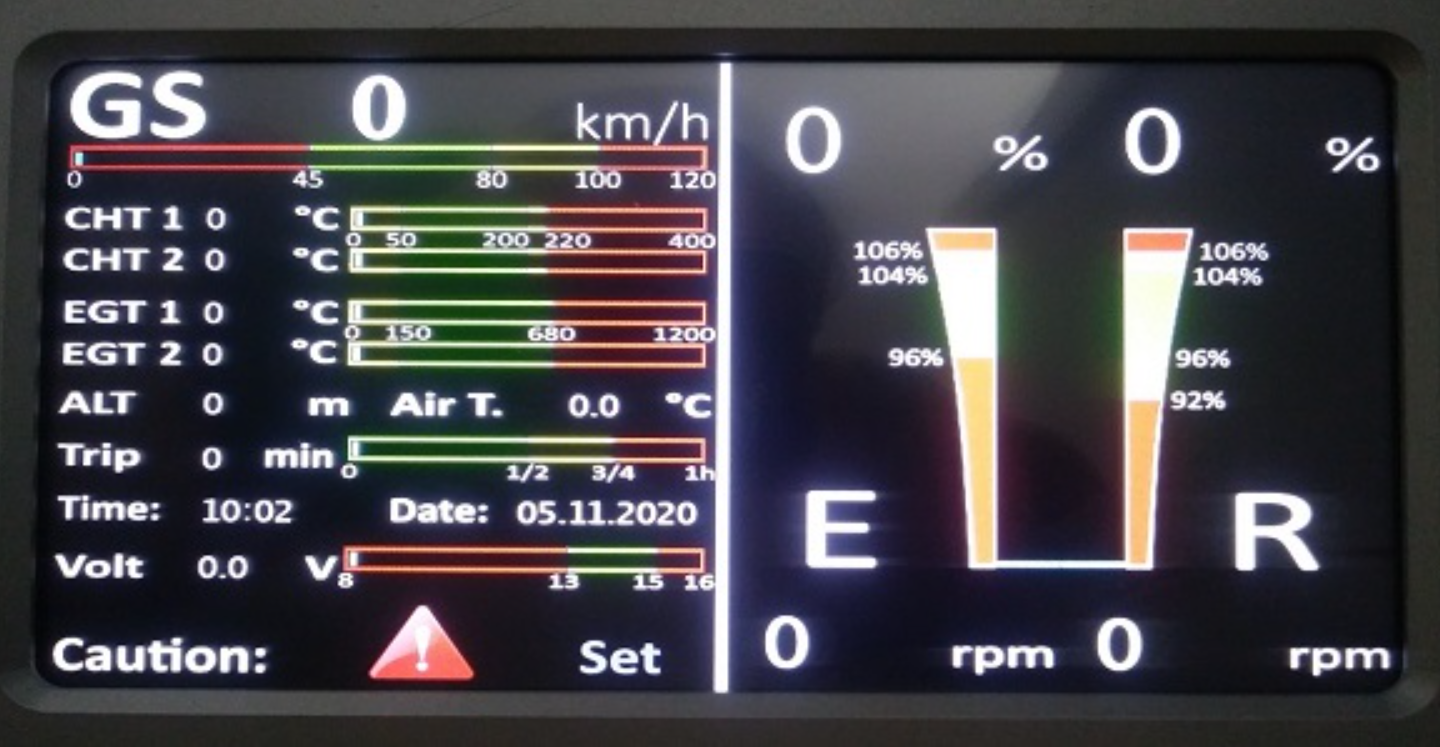 One noted benefit of coaxial rotors is a higher payload due to all of the engine’s power being available for lifting. In the case of the Mirocopter SCH-2A, that means that it can lift a pilot weighing up to 273 pounds, which is a lot higher than a number of the eVTOLs going on sale. Popular eVTOLs like the Jetson One and the Opener Blackfly can carry only 200-pound pilots.

It’s also a bit more practical than the eVTOLs going on sale, too. While an eVTOL might be able to get you up into the sky for 20 minutes, this feeds off of a 5-gallon tank of fuel for up to an hour. The tiny helicopter is 8 feet-tall by 4.9 feet-wide and 14.3 feet-long. So long as your garage opening is tall enough, it should fit!

The Mirocopter SCH-2A falls under the United States’ FAR Part 103 ultralight vehicle rules. That means that owners and pilots of the SCH-2A don’t need to prove airworthiness and they don’t need a pilot license. Legally, you can fly this thing as soon as you get it home. However, ultralight rules are very limiting in the aircraft and how you can fly it. Don’t expect to upgrade the fuel tank or fly faster than 62 mph. And you can forget about night flights or carrying a passenger. Some eVTOL manufacturers talk up the ability to fly to work. Well, if your workplace is in a populated area then you can’t fly there, either.

Sadly, I’ve found zero reviews for the little guy, so it seems that there are very few of them out there.

With legal limitations in mind, these will be best for folks who live in rural areas. At $35,000 it can be an attractive proposition for someone wanting rotorcraft fun. The closest thing to it is the Composite FX Mosquito XEL. With that, you get similar specs and some weather protection, but a Mosquito sets you back $47,000 for a kit or $60,000 for a factory-built model.

Those aforementioned eVTOLs are even more expensive, with the Jetson One setting you back $92,000. Of course, the Jetson comes with flight computers and some safety equipment, but the $57,000 difference is still a decent chunk of change.

Also, while you legally don’t need a license to fly an ultralight, you absolutely should get some flight instruction. Flying is extremely fun and exhilarating, but it’s also an activity that can kill if you have no idea what you’re doing. After all, this helicopter is basically some scaffolding with an engine. 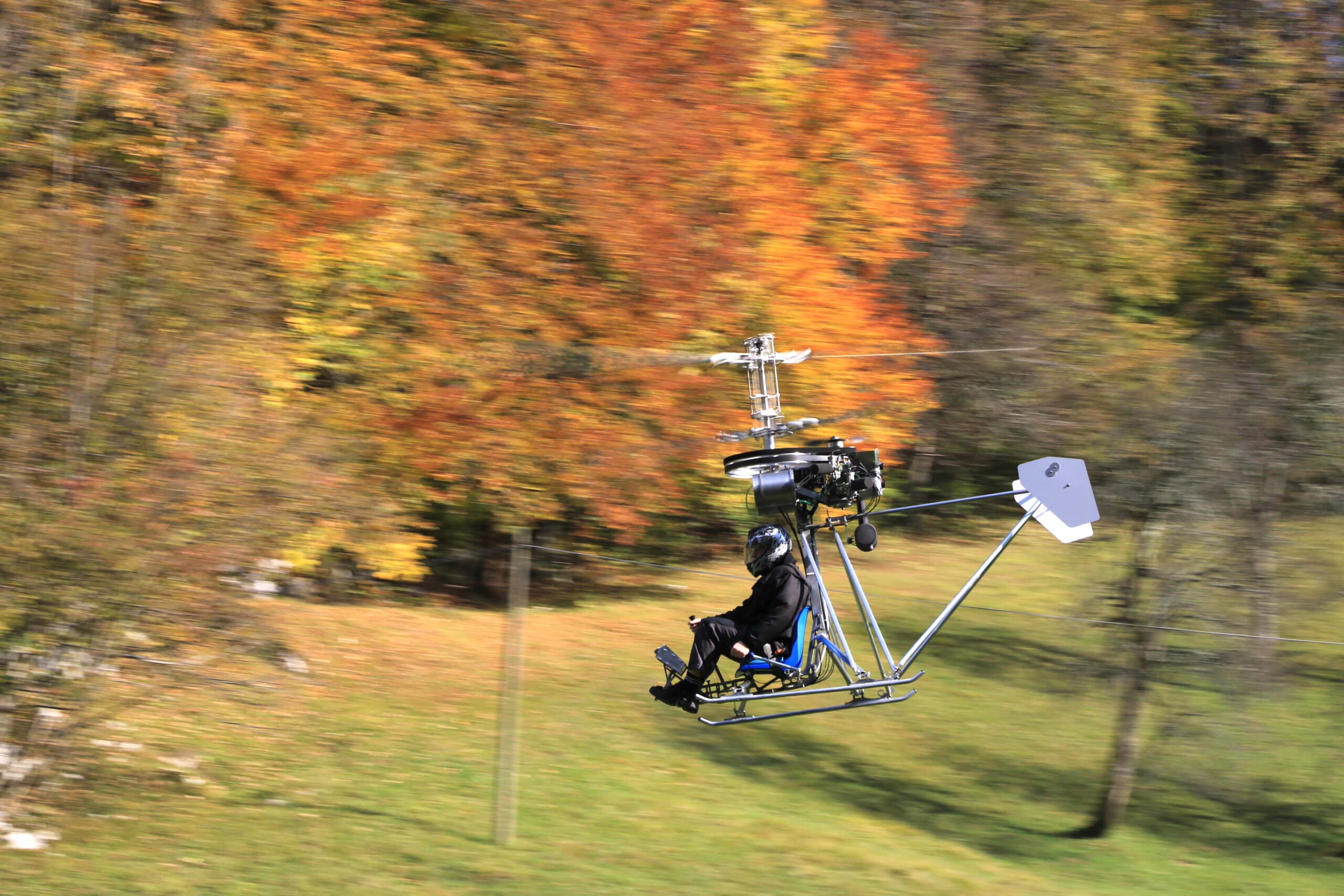 The company says that these are on sale right now. One of the distributors listed one on eBay, but the ad just expired.  If it’s not relisted, you could always contact the distributors. Again, I found zero reviews for this beast, so it would probably be wise to wait a bit. That said, if you already own something like this, I’d love to know how fun it is!

Mercedes is a lifelong fan of all things powered by an engine. When she isn't driving one of her five Smart Fortwos or her 14 other vehicles she could be found in the cockpit of a Cessna 172 or perhaps swimming in any body of water that she could find. She also has a deep love for buses of all kinds. Please send her buses. mercedes@theautopian.com Instagram: @mistymotors Twitter: @Miss_Mercedes30 Facebook.com/neonspinnazz
Read All My Posts »
PrevPreviousEvery Car I’ve Ever Owned: Porsche Racer And Builder Leh Keen
NextTwo-fer Truck Tuesday: 1982 and 1983 Dodge Rampages vs 1982 and 1983 Datsun 720sNext