Despite massive expansion of the mid-price and premium electric vehicle segments, building a cheap EV for Western markets still feels tougher than pulling oneself up by one’s bootstraps. Batteries are expensive, charging stations aren’t exactly plentiful or reliable, and profit margins are slim. However, some manufacturers are answering the call. Perhaps most notably, a German company called Sono Motors seems like it may have some interesting solutions to most of these aforementioned concerns, and all packed into an entry-level electric hatchback.

Called the Sion, this EV holds no relation to Scion, so good luck totaling one of these at 100 mph and finding yourself upright on miracle status. However, like Toyota’s dearly departed Scion sub-brand, the Sion packages fresh ideas in a small, funky, upright form. Let’s delve into this upcoming electric car and find out why it’s so fascinating. 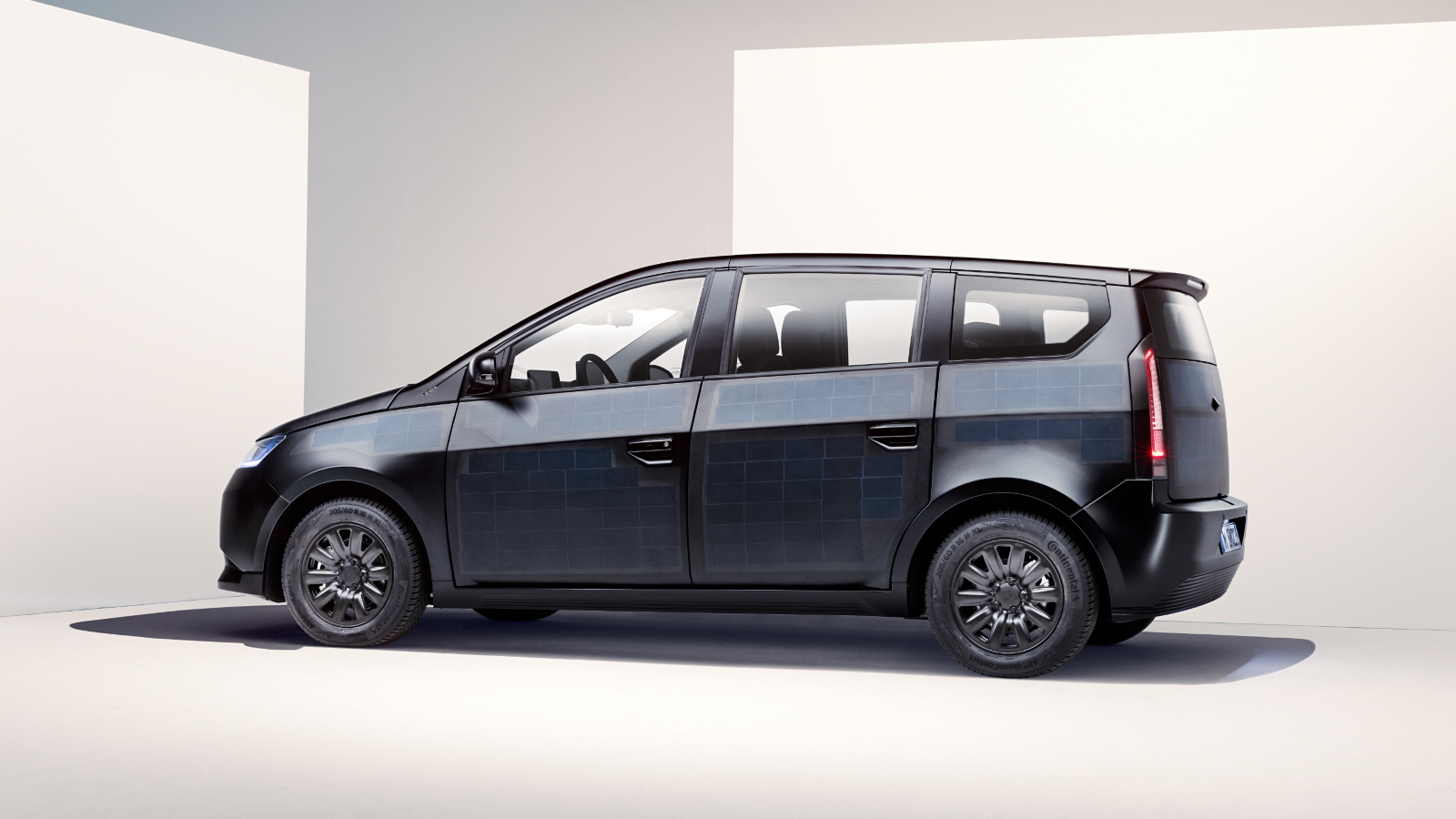 First thing’s first: Let’s start with propulsion. While the Sion won’t win many range contests, its battery pack has a refreshingly small capacity of 54 kWh and is made of cheaper lithium iron phosphate cells. Sono Motors expects a range of 190 miles (305 kilometers) on the WLTP cycle which, while not incredible, certainly isn’t bad. What’s more, the Sion feature bidirectional charging of up to 11 kW, handy for juicing up other electric cars through a Type 2 connector or powering household devices through an integrated household outlet. Peak Level 3 DC fast charging clocks in at a mere 75 kW, although ultra fast charging speeds aren’t hugely necessary when you don’t have a huge pack to fill.

Some of you already drive electric vehicles, in which case you can probably skip this part of the article. However, you might find this helpful if you’re not too familiar with the ins and outs of EVs. See, battery packs are rated in kWh, or kilowatt-hours. This is a measure of energy over time, which means that means in theory, the 54 kWh pack in the Sion can pump out 54 kW of juice for an hour. Electric vehicle charging stations are rated in kW, no h. Why? Well, time spent at a charger is largely dependent on battery pack capacity, power needed for a charge, and a vehicle’s charging curve. That last bit is rather important as EVs don’t typically maintain peak charging flow from zero charge all the way to a full charge. Now, assuming all EVs have the same charging curves is like assuming all hamburgers are the same size, but we’re working with hypothetical hamburgers here so bear with me. 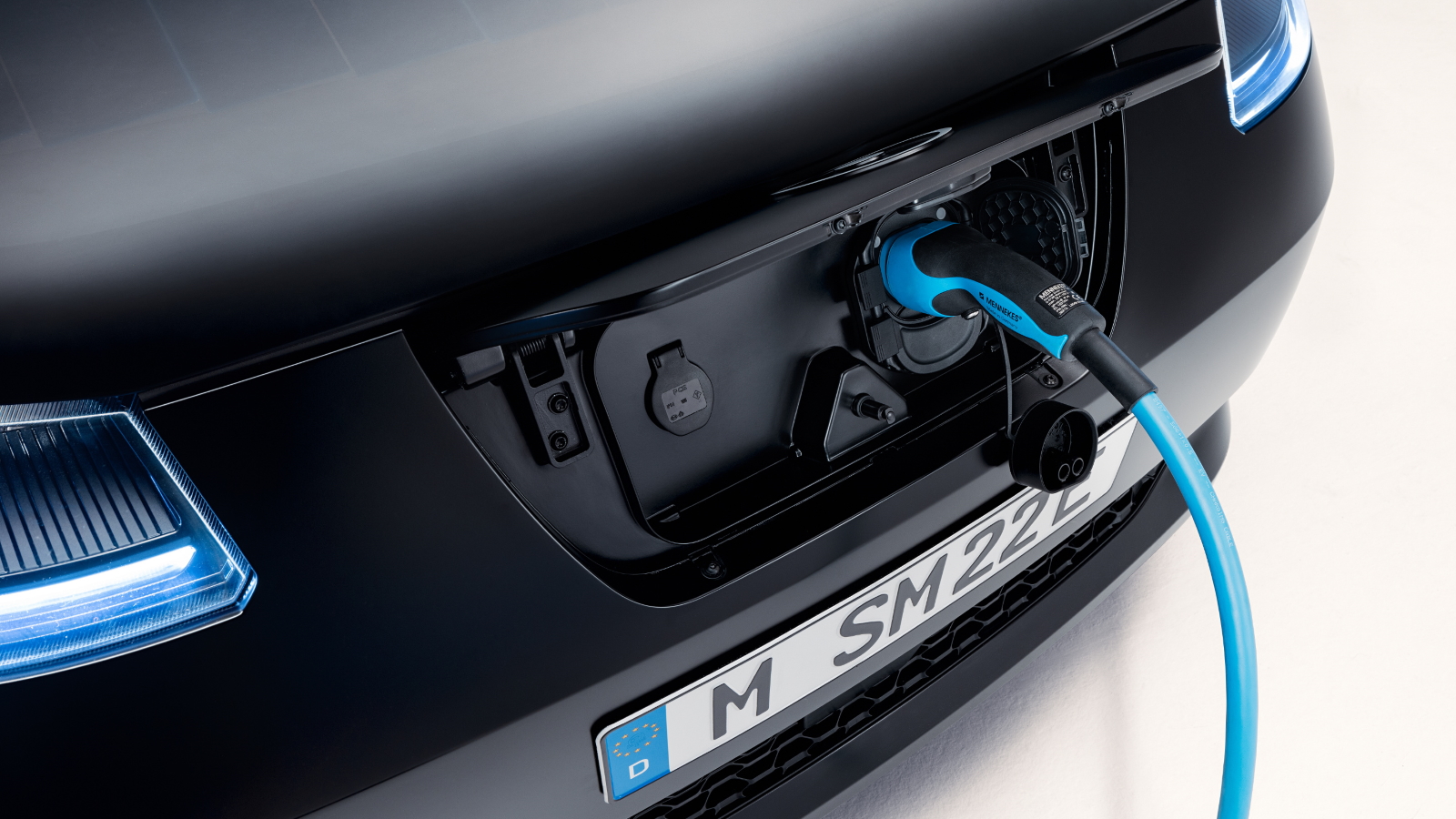 So what does this mean in the real world? Well, it turns out that the Sion might not take much longer to charge than a Volkswagen ID.4 Pro. Sono Motors claims charging to 80 percent can take as little as 35 minutes on a Level 3 fast charger, although Sono Motors doesn’t specify whether that’s from 10 percent remaining charge or from zero. Of course, that’s assuming you actually need to charge the Sion often.

[Editor’s Note: While I applaud Thomas breaking down kWh and kW and charging curves and all that, the concept of a smaller battery reaching 80 percent state-of-charge faster than a big battery would reach 80 percent — using the same low-output charger – should be fairly intuitive. It’s like trying to use a faucet to fill a small water bottle versus a bathtub; the bottle will be filled first, but it still won’t have much juice in it. Even if you break out a fire hose (which represents a higher kW charger) for the tub, the little bottle could get to 80 percent via the faucet before the tub hits that figure. -DT]

You may have noticed that the Sion looks a little bit funny — almost like it’s unfinished. That’s because almost every panel features embedded solar cells, a total of 456 half cells scattered about the body using polymer substrates for strength and minor impact resistance. Sono Motors says these cells can add an average of 70 miles (112 km) of range per week, or up to 152 miles under ideal conditions. So, if you drive a Sion, work five days per week, and commute fewer than 14 miles round-trip per day, you won’t have to plug into the mains overnight between most workdays. Suddenly, it seems that solar powered production cars may no longer be in the same science fiction camp as cars powered by nuclear energy or electric eels.

[Editor’s Note: I’m extremely skeptical of range estimates from solar cells. The variables are huge, and 70 miles a week is 10 miles per day, but without knowing how much direct sun they need to pull this off or at what location or whatever, I’d take these numbers with a grain of salt the size of a Rubik’s Cube. – JT] 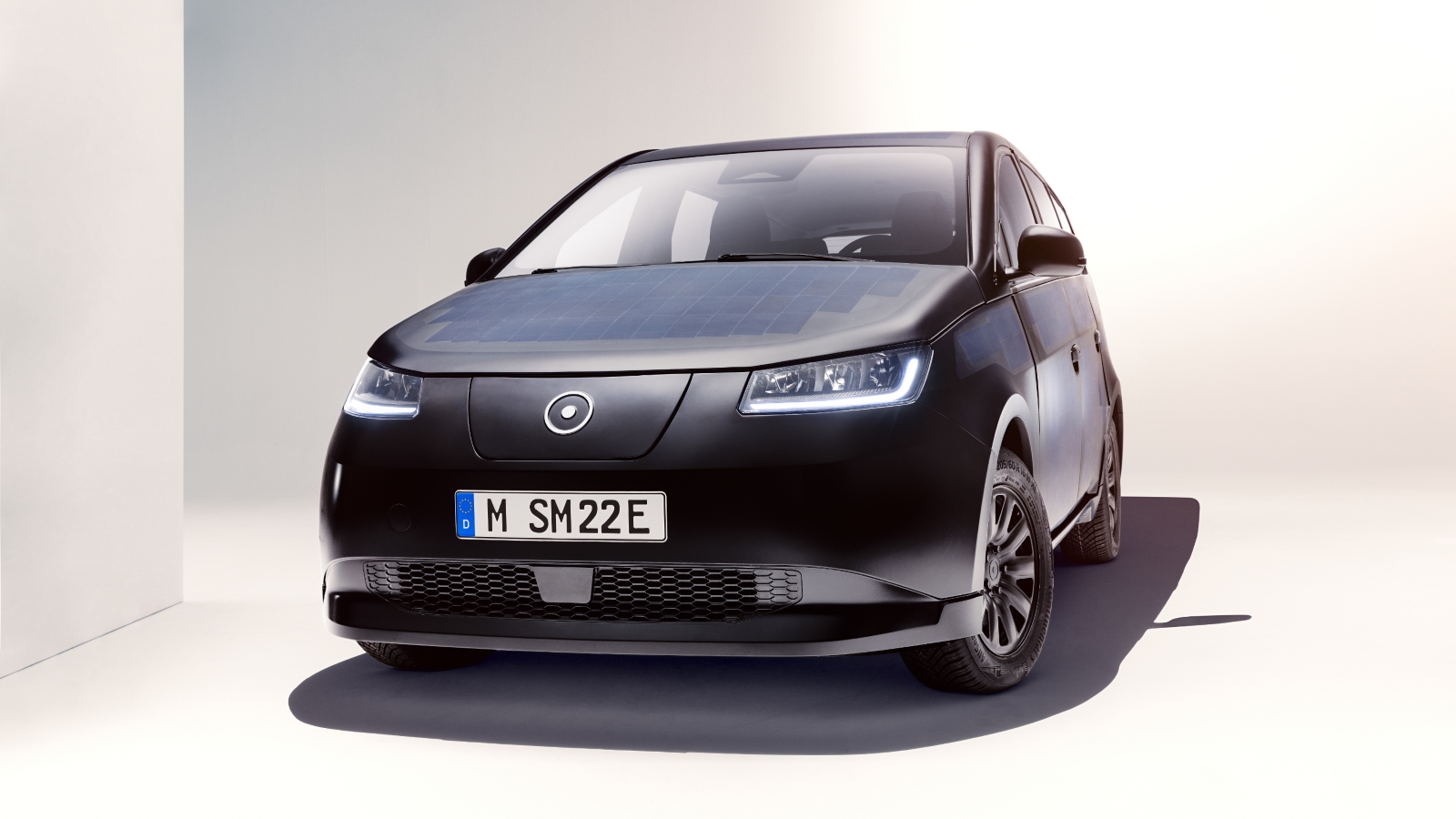 Right, so that’s the powertrain taken care of, now what does the Sion look like? Well, solar panels aren’t inexpensive, so costs must be cut somewhere. Fortunately, Sono Motors has taken a refreshingly upfront approach to the Sion’s cheapness. There’s no privacy glass, no 800-volt architecture — there aren’t even full hubcaps on tap. You get styled steel wheels, a reasonably airy greenhouse, and not a whole lot of styling excess. It’s wonderfully honest, an innovative car masquerading as a bargain-basement econobox. Part of that’s because Sono Motors spent lots of money on tech, but part of it’s because the cool design is largely saved for the Sion’s interior. You know, the thing you have to look at and be in while you drive. 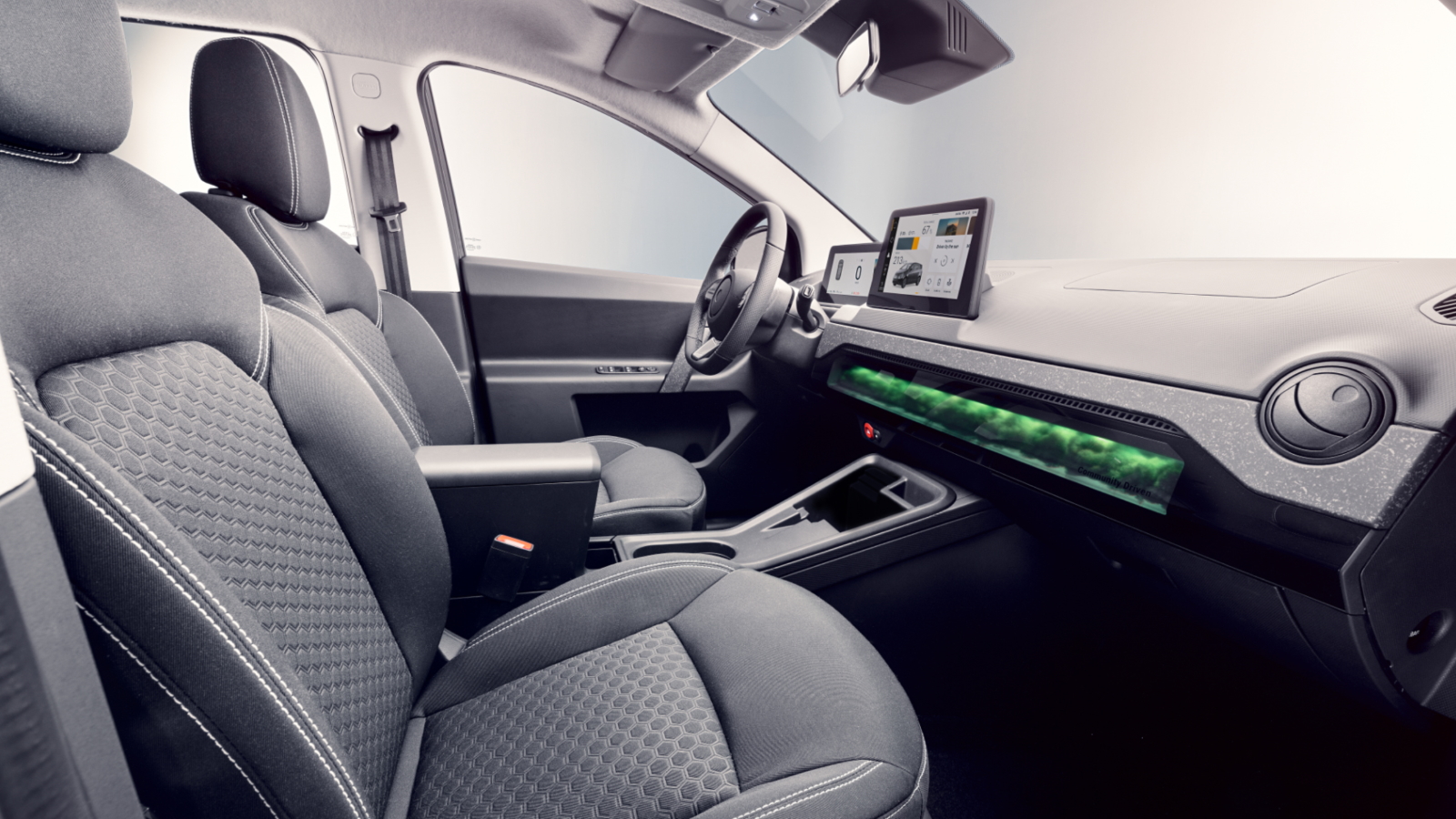 The first thing you’ll notice about the Sion’s interior is the giant green bar across the dashboard. It’s not an ambient lighting feature, nor is it painted trim: it’s actually moss. Well, dead moss, but dead moss is still moss. I’m not sure if it’s eco-chic or cottagecore, all I know is that I like it very much. If I asked Rolls-Royce to make me a Phantom with a bonsai tree in the dashboard’s gallery display area, the fine people in Goodwood might look at me like I had nine nostrils before quoting me a price equivalent to the GDP of Belize. Meanwhile, Sono Motors is throwing in moss for free. We love to see it.

[Editor’s Note: How is it preserved? Is it encased in acrylic? That said, big moss fan here. Lichen, too. – JT]

As for the rest of the interior, it’s a bit of a hodgepodge, but in a good way. The main air vents are a generic circular style, but that really just means that they should work well and be durable. The door cards appear to be quite simple and the center armrest looks a bit low-poly, but that’s okay. Decisions like that keep the Sion feeling honest. Plus, the stuff the driver will often interact with looks quite nice. Crisp, hoodless screens for infotainment and gauges sit perched atop the dashboard like squirrels on a fence. The full-width dash trim appears to be made of recycled materials, while semi-concealed diffused air vents should offer a soft, wafting sort of climate control. Last but not least, the seats appear slightly overstuffed and upholstered in soft, neatly-patterned cloth, a bit like granddad’s armchair. Yes, it appears that we’re looking at a comfortable, unpretentious cabin. Not a bad thing if you ask me. 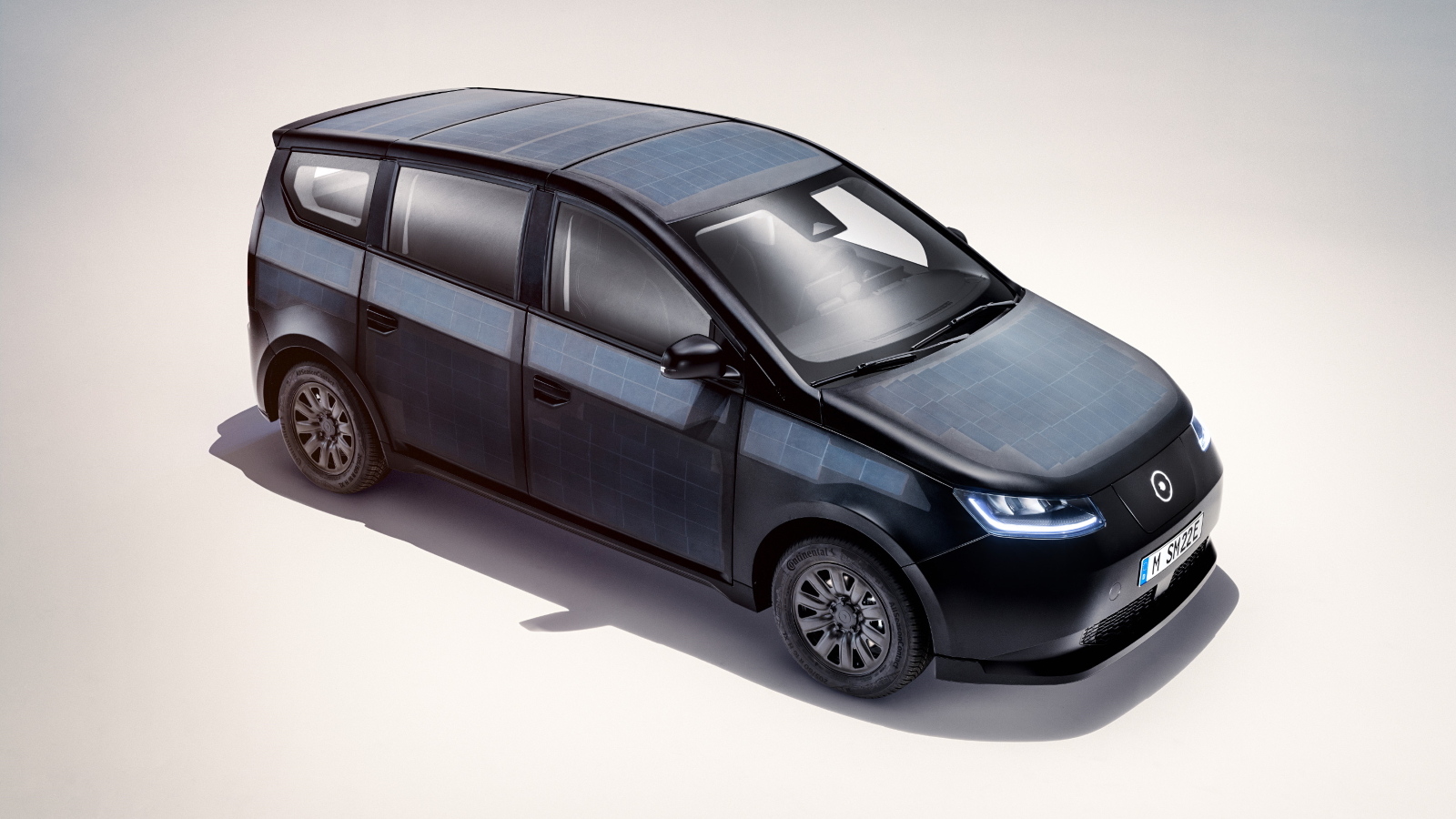 So, what we have here is a gleefully basic electric car with a fairly short range and crazy solar panel technology. Is this another technological proof-of-concept with limited capabilites and a sky-high price? Absolutely not. Sono Motors has priced the Sion from just €29,900 including German VAT, or around €25,126. That’s just under $26,000 at the time of writing, right on the low end of the electric car spectrum. Hats off to the engineers who’ve made this car, that price is a seriously impressive feat to pull off. So aside from some obvious cost-cutting measures, how has Sono Motors done it? Well, because the body panels of the Sion are made of plastic, they don’t need any paint. What’s more, every single Sion will roll out of the factory looking identical to the one you see in these photos. A cheap new hatchback in a single spec, now where have I seen that before?

While reasonable pricing is a boon on its own, the Sion should also be easy to fix. Sono Motors plans on making the full workshop manual for the Sion viewable by the public, a decision with some fairly large benefits. Not only should owners be able to service the Sion in their driveway, independent workshops should have easy access to repair instructions and torque specs. What a breath of fresh air. For repairs to the solar cell body panels and high-voltage system, Sono Motors plans to partner with existing workshops, a decent plan that should be much cheaper than building out a bespoke servicing network from scratch. 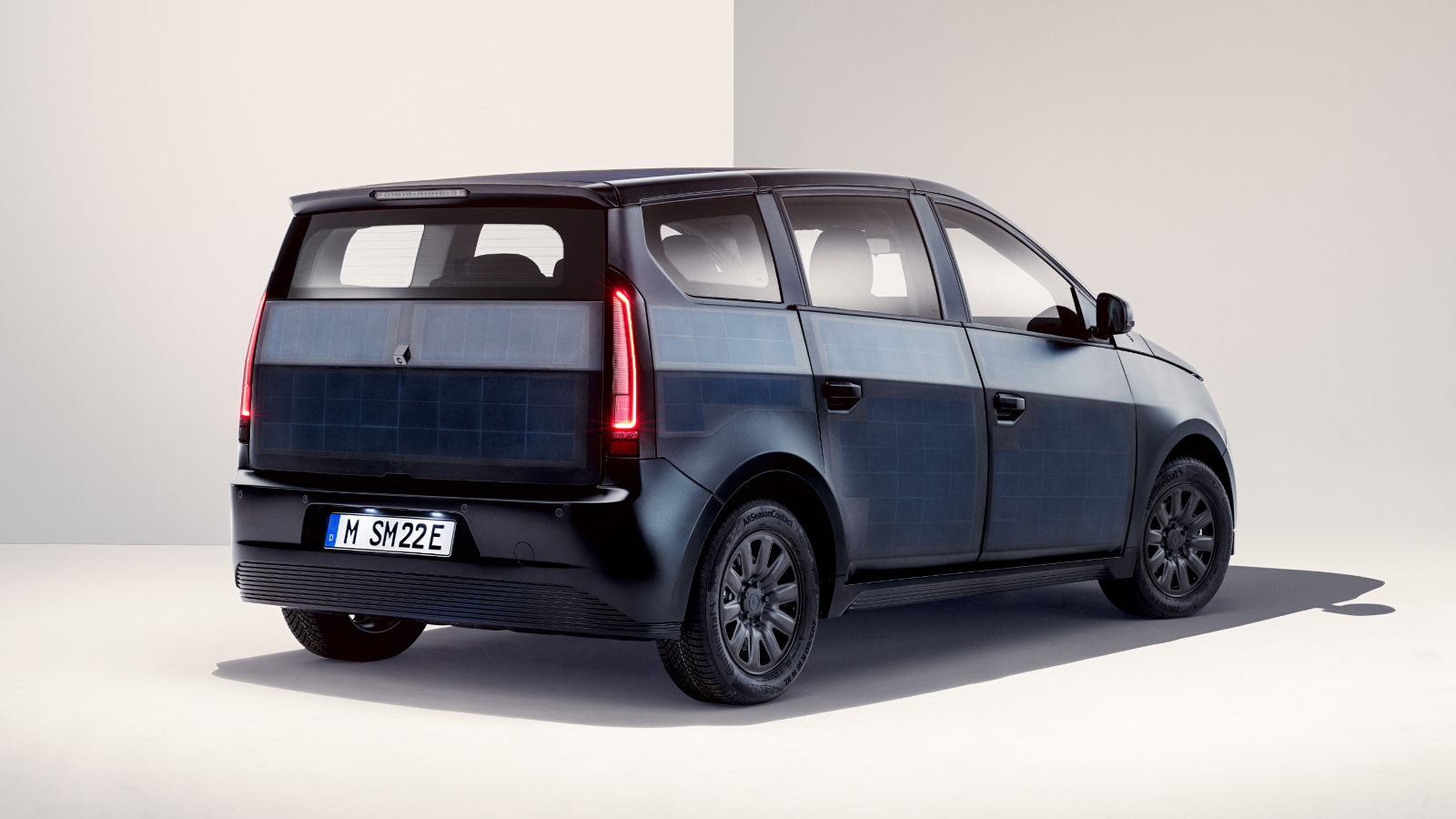 It’s worth noting that while the Sion seems crazy, it doesn’t actually appear to be vaporware. Sono Motors already has some preproduction Sion models built for development and homologation purposes, including testing in America. While it’s unlikely that the Sion will go on sale in America, it doesn’t hurt to dream. Plus, some journalists have already driven preproduction Sion models, albeit for short distances only. Still, third-party drives are fairly solid indicators that a vehicle is real. Interestingly enough, the Sion should have a link to the Porsche Boxster and Fisker Karma as production is expected to take place at Valmet Automotive in Finland. Expect production to kick off next year, with production capacity expected to reach 43,000 units in 2024. I like what I’m seeing from Sono Motors so far, so hopefully the next two years or so goes according to plan.

[Editor’s Note: I generally agree with Thomas and like a lot of what I’m seeing here conceptually, but the solar claddig brings up a lot of questions. Is it going to deal well with dings and scratches? Will it make replacement fenders and doors absurdly expensive? How clean do you need to keep it to be functional? I’d love to see an even cheaper version minus the solar cladding and with some basic plastic panels in real colors, personally. – JT]

Thomas is a Nu Rave-blaring, heel-toe downshifting, maple syrup-swilling, chassis-geeking, junkyard parts-hauling, floppy-haired scenester who's been writing about cars since college. His current ride is a 2006 BMW 325i with the six-speed manual gearbox. Instagram: @thomas.hundal Twitter: @thomashundal
Read All My Posts »
PrevPreviousHere’s The Science Behind How Cars Stayed Cool Before ‘Real’ Air Conditioning
NextThis Is Why Car Designers Always Draw Absurdly Huge Wheels On EverythingNext