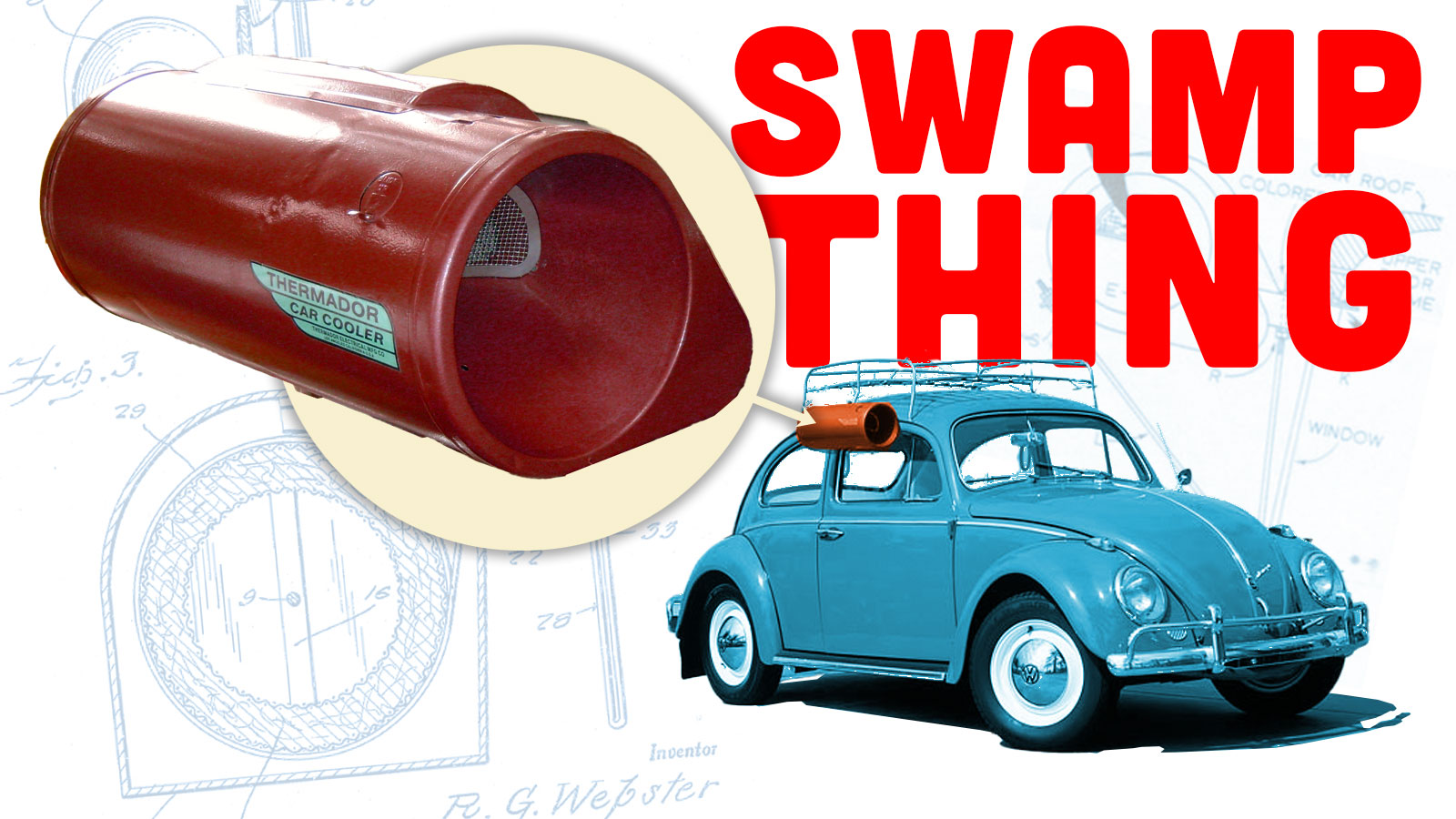 No, that is not a rocket launcher strapped to the side of a car. It’s officially known as an evaporative cooling device, which was a popular accessory for drivers prior to the standardization of air conditioning in vehicles. Evaporative coolers are nothing new; ancient Persians used the trick to keep temperatures down in buildings long before lowriders were outfitting them to their sparkly sleds. While the usage has varied over time, the basic thermodynamic principles that make it work have not. Let’s talk about it.

Shown below is a patent diagram first filed in 1938. The mechanisms depicted in this “air conditioning attachment for automobiles” drawing are fairly simple, with the primary user-control being the drawstring meant to moisten a cylindrical air “filter” or “sponge.” A spring wound around the central axis of the device returns the filter to place once the user has pulled the string. There’s also a reservoir, which one tops off with a hose every once in a while; between pulling that string, filling up the reservoir, and making sure the filter doesn’t get moldy, that’s all there really is to this old-school air conditioner, which would later become known as a “swamp cooler.”

[Editor’s Note: Robert Peterson is a young engineer who will occasionally be writing technical stories for the Autopian (he has a full-time engineering job). Everyone please give him a nice welcome. -DT]

Here’s a look at the guts, courtesy of a swamp cooler repair service on Etsy:

The unit hangs off the top of the side window glass, which allows for universal mounting, but poses some concerns regarding safety and stability. But hey, it’s from the 1940’s when mom-arm seat belts were a thing, so who cares right? 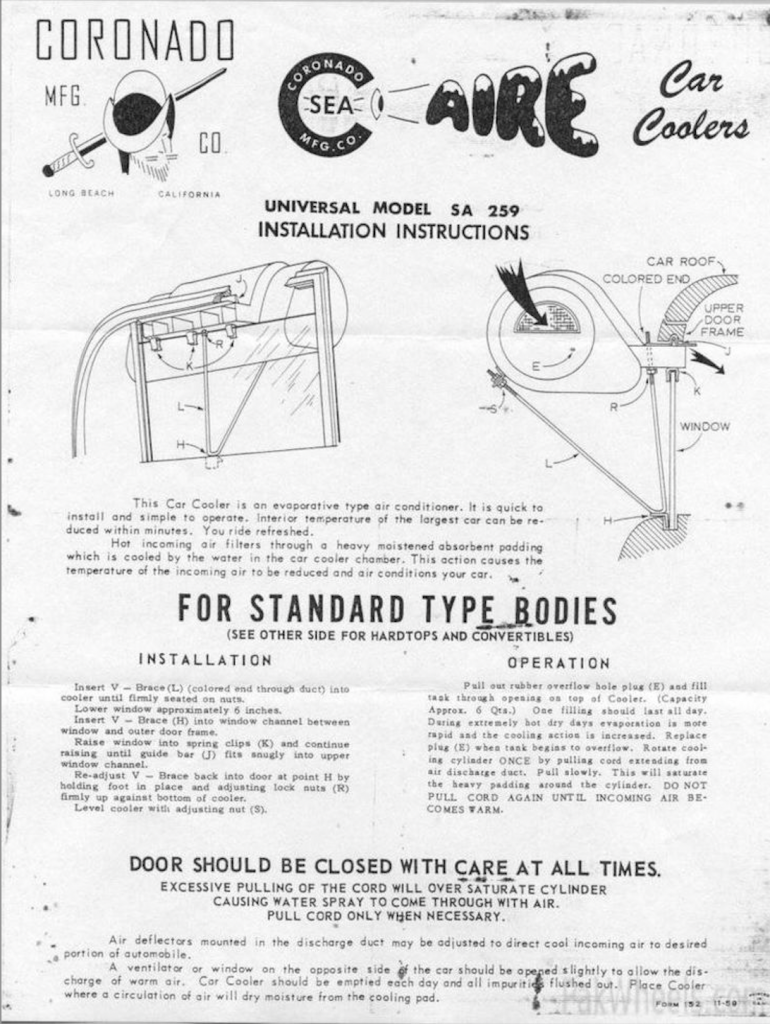 But now for the nitty gritty. Here’s your crash course on heat transfer in case you’re a little rusty. There are three modes of heat transfer: conduction, convection, and radiation. In the case of swamp coolers, convection is where it’s at. Convection here is the transfer of heat energy from a dynamic fluid (hot desert air) to a solid (the damp cloth cabin filter). Heat flux (q’’ or “energy on the move”) is dependent upon a heat transfer coefficient (h) and the temperature difference between the passing fluid (hot air) and solid body (damp cloth). Maximizing the temperature difference is an easy way to optimize the rate of heat transfer.

Okay, so you might be thinking; Air will transfer its heat to the colder water that you poured in via your hose, but once the water reaches the same temperature as the air, the cooler will stop working. However, these coolers have a cheat code: evaporative cooling, which supercharges the whole process. You’re right to think that energy moves from hot bodies to cold bodies (though “hot” and “cold” are always relative). Swamp coolers funnel hot dry air over a damp cloth, and energy from the hot air is indeed absorbed by the water particles in the cloth, which elevates the temperature of the water, but while you might think the cooler might become ineffective once the water gets warm, interesting stuff happens when it enters a liquid-vapor state.

According to the Wiley 9th Edition Fundamentals of Engineering Thermodynamics, “When the system is at the saturated liquid state… additional heat transfer at fixed pressure results in the formation of vapor without any change in temperature but with a significant increase in specific volume” (Moran et. al, pg. 63). This trend can be observed in steam tables as shown below. Energy (technically “entropy” in kJ/(kgK)) is still being absorbed from the air even though the temperature is stagnating within the liquid-vapor state.

Now in English please: All of this heat transfer results in air that is now cooler in temperature and more saturated with humidity, as creating steam sucks an immense amount of energy out of hot air. Environments with low humidity typically experience the most dramatic effects of this process, as there is more opportunity to saturate the air with water.

It’s the very same phenomenon that occurs when we sweat. It takes energy/heat to evaporate the liquid droplets, and that additional energy/heat comes from your body, helping you feel cooler. Generally, this leaves you more comfortable, but maybe a little smelly, too.

The headline of this article is “Here’s The Science Behind How Cars Stayed Cool Before Air Conditioning,” and while the “Swamp Cooler” is the main topic of discussion, the truth is, the oldest, most basic way to keep a car cool is via old-school “AC” that doesn’t stand for “air conditioning” but rather “ambient cooling.” This, of course, is just a joke, just like “four-forty air conditioning,” which represents four windows cranked down, and the vehicle driving 40 mph. Either roll down the windows, or — on older cars — pop open the awesome quarter windows:

This keeps you cool in much the same way that a fan does. Your body gives away heat to try to evaporate sweat off the skin, but that high-humidity, evaporated sweat sitting right there against your skin makes evaporating more sweat difficult, as the air can only take so much vapor. So rolling down your windows or cracking your quarter window displaces that humid air, allowing your body to evaporate its sweat, and give off heat.

So rolling down the windows and the “Swamp Cooler” are working on the same principle, leveraging Heat of Vaporization to remove heat. As Robert mentioned, Heat of Vaporization, (Hv or Hvap) is “the amount of heat needed to turn 1g of a liquid into a vapor, without a rise in the temperature of the liquid,” per Sciencedirect. Think of it as energy required to break the bonds between water molecules. Anyway, let’s get back to the cooler. -DT]

Once the air from the Swamp Cooler has been “conditioned,” the occupants can enjoy a pleasant, cool summer breeze rather than Death Valley’s finest dragon breath. And to boot, the entire process takes zero electricity or fossil fuel. 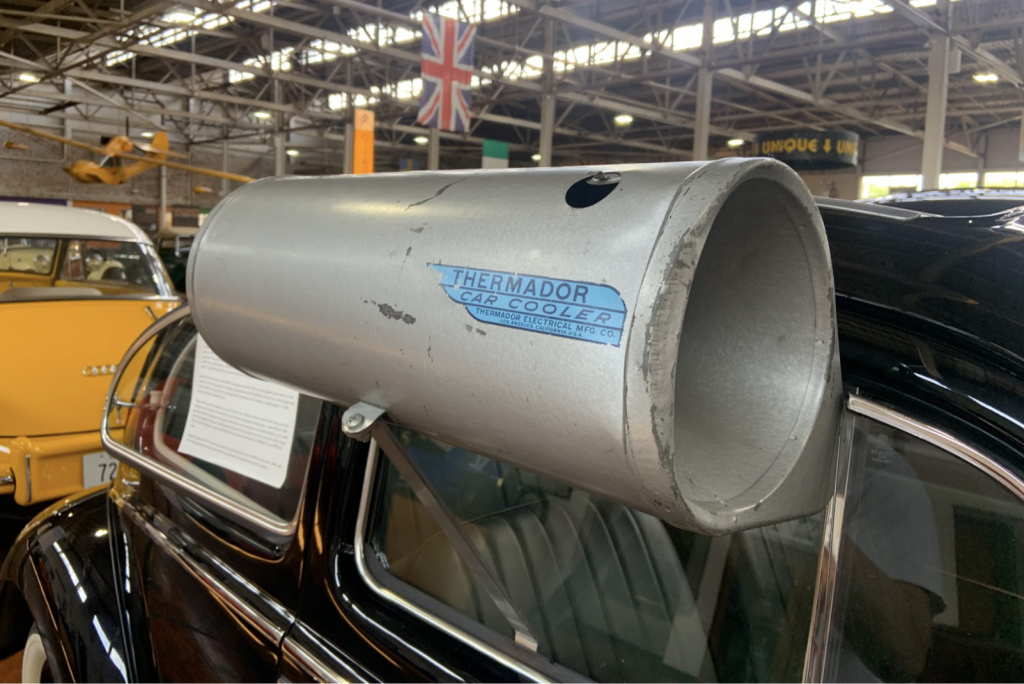 As neat as all of this is, there are plenty of reasons we no longer see swamp coolers. For one, the units are large and crudely secured to the side of the car. They represent a giant aerodynamic anchor on the side of your vehicle — not ideal for fuel economy, driver visibility, or neighborhood mailboxes. Evaporative coolers can cool air up to 30 °F in ideal conditions, but the effect is diminished in more humid environments. The particular Thermador unit featured in this article requires the passenger to pull a drawstring to dip the filter into the water pool to re-moisten the cloth as it dries out. This renders the device useless if nobody happens to be sitting shotgun. I guess this is what friends are for? The car also has to be moving for it to work. But, ultimately, the standardization of AC in cars made this party trick invention all but obsolete.

In the words of Stephen King, “Sooner or later, everything old is new again.” As the world contends with growing populations and the ever present climate crisis, some neat sustainable tricks from our ancestors may be worth revisiting.

(A massive thanks to the Lane Motor Museum in Nashville, TN for their hospitality and pictures)