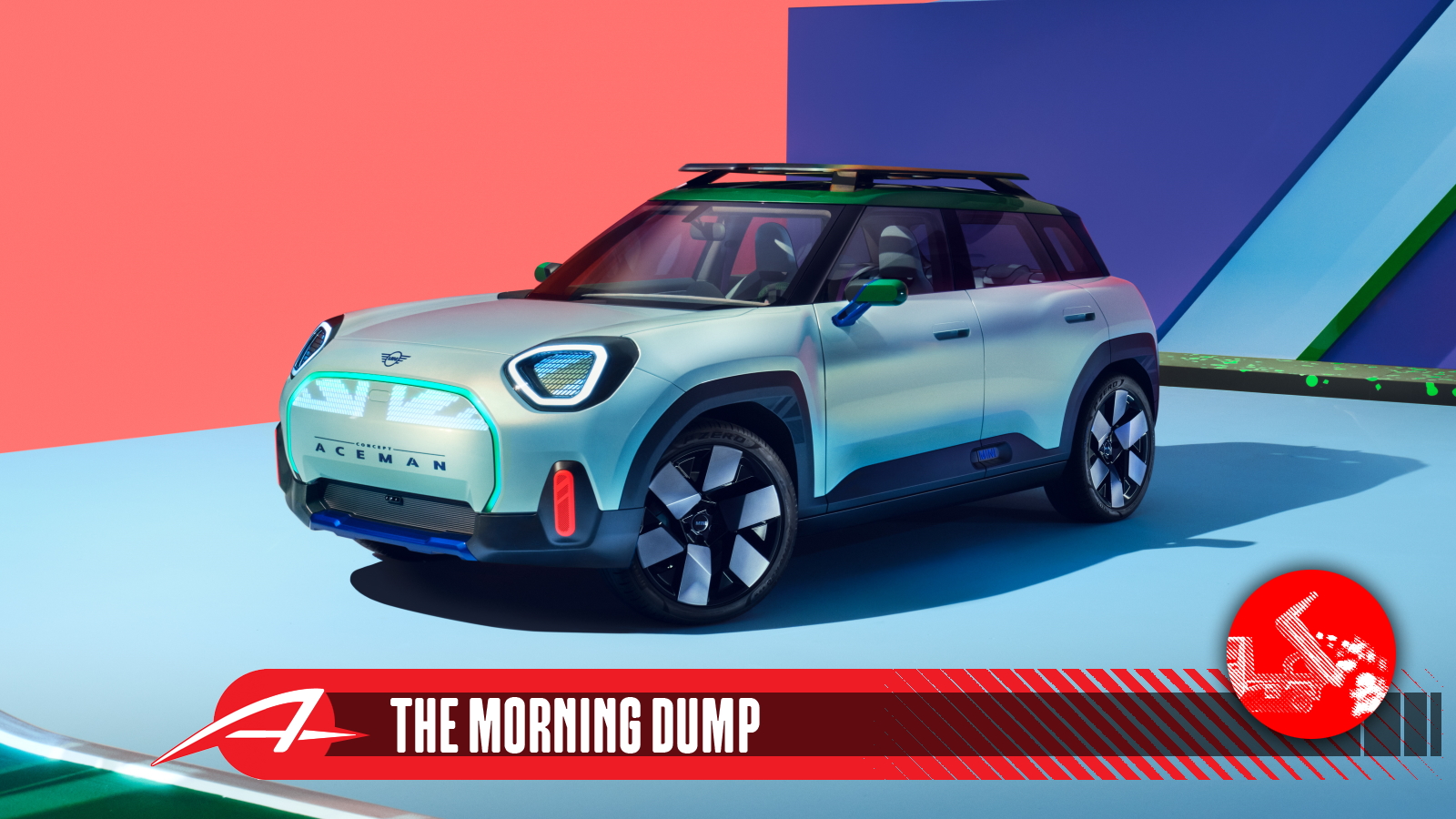 Mini unveils the funky Aceman, Valeo claims the chip shortage is easing, and Spotify’s Car Thing is dead. All this and more in today’s issue of The Morning Dump.

So, first question: Is the Aceman actually mini? Well, yes and no. While a length of 159.45 inches (4,050 mm) is about 2.35 inches longer than a current five-door Mini, the Aceman makes the 173.6-inch (4,410 mm) Mercedes-Benz GLA look absolutely gigantic. However, the Aceman is properly wide at 78.3 inches (1.99 meters), roughly the same width as the outgoing Range Rover. Hey, at least the body width should help rear shoulder room. Alright, so the Aceman is only somewhat mini, but I’m not sure how much that matters as it’s a recognizable piece of design. Sure, the illuminated Union Jack motif on the front fascia feels a bit awkward in a post-Brexit world, but the fan blade wheels, contoured arches, and chunky roof rack really seem to add something new to the classic Mini shape. This is a very modern yet very familiar car, certainly not a bad thing. Could the front fascia be styled better? Sure, but the Aceman doesn’t feel preposterously overgrown in the same way the Countryman does.

While the exterior of the Mini Aceman is very much evolutionary, the inside feels more revolutionary. Sure, there’s still a big circle in the middle of the dashboard, but it’s now a floating OLED screen that cleaves huge visual bulk out of the dashboard. Speaking of the dashboard itself, full-width fabric trim looks quite funky and seems wonderfully tactile. Since the Aceman is electric, a traditional shifter isn’t needed, so the center console is opened up for storage and wireless charging. Solid stuff. What’s more, Mini has gone absolutely mad with patterns inside the Aceman, with houndstooth, word print, and embroidered graphics bringing such a lovely sense of fun to the interior.

Honestly, I wouldn’t be surprised if the Aceman made production in some form. True concept cars typically don’t have this many shut lines, nor do many concept cars have actual side mirrors that seem reasonably useful, an interior rear view mirror, or sun visors. Not much is know about the Aceman’s underpinnings, but the next Mini hatch will feature an electric variant, so a suitable platform exists. Let’s see what the future brings.

Automakers don’t typically build electronic components in-house. Often, a reputable supplier with dedicated facilities and experience gets contracted to build electronic components which then get shipped to assembly plants and put into cars. Case in point? Many premium audio system components are made by Harman International, several manufacturers use lighting systems made by Hella, and Valeo supplies a whole raft of components to manufacturers [Editor’s note: I used to work with Valeo heat exchangers while designing cooling systems at Chrysler. -DT]. Valeo has recently released its second-quarter earnings report, and it comes with some positive news on the chip shortage, as reported by Reuters.

“The context has been difficult,” CEO Christophe Perillat told reporters, referring to microchip shortages that have hit the automotive sector. However, he said the chip situation “is improving.”

Valeo said it was “particularly pleased” with its order intake, especially in vehicle electrification and advanced driving assistance systems.

Hey, improvement’s a good thing to see, even if it may not be a grand improvement. In addition, S&P Global expects total worldwide vehicle production to hit 81 million units this year, up from 77 million in 2021. Crawling out of this new vehicle shortage is going to be a war of inches, but it’s nice to know that some progress is being made.

A hotly debated topic in the shift towards EVs is whether or not automakers make money from electric cars. After all, battery packs are expensive to make and consumers will typically only pay so much for a product. You might remember compliance cars like the Fiat 500e, which lost FCA around $14,000 per unit. While these rather reluctantly-produced EVs may have impacted automakers’ bottom lines, past performance isn’t always indicative of present situations. Some EVs are doing just fine in terms of profit margins and Automotive News Europe reports that the Mercedes-Benz EQE is one of them.

“It’s more or less the first quarter of EQE sales, but at this point the EQE margin is at the point of the E-Class margin,” Mercedes CFO Harald Wilhelm said Wednesday on the automaker’s first-half results call, adding that the EQE might even be slightly ahead of the E-Class right now.

Hey, that’s great news, right? Well, yes and no. This case of profit parity comes with a fairly big downside.

That’s a fairly significant walk-up from a diesel E-Class to an electric EQE. You can buy a lot for 20,000 euros, from 20 Renault Twingos to around 10,000 liters of diesel fuel. While Mercedes-Benz is a maker of luxury vehicles and clients in that space typically aren’t afraid of paying more for something new, 20,000 euros is pretty steep. Will EV pricing ever come down to match combustion car pricing? Eventually, although the timeline is up in the air.

We all just want tech integration to be simple, right? Apple CarPlay usually beats OEM infotainment interfaces, one-touch Bluetooth pairing helps us throw on some tunes for driveway wrenching, and there’s absolutely nothing wrong with plugging in a charging brick to juice up a device. I guess nobody told Spotify. The Swedish streaming service launched a device called the Car Thing early this year, much to the befuddlement of everyone. It was only a matter of time, but as reported by Engadget, the Car Thing is no more.

Spotify’s less-than-stellar quarter can be partly blamed on a decision to exit the hardware business. As part of its earnings data, the streaming service revealed that it stopped manufacturing its Car Thing player. In a statement to Engadget, a company spokesperson pinned the decision on “several factors” that included customer demand and supply chain problems. The withdrawal hurt Spotify’s gross profits.

Honestly, I can’t say I’m surprised. The Car Thing had a nauseatingly vague name and some rather serious limitations, chiefly that it was just a phone-dependent remote control, so it wasn’t a huge upgrade over just sticking your phone to a proper mount. It wasn’t a proper alternative to Apple CarPlay or Android Auto, it didn’t provide any hugely new ways to play music in your car, and it cost $90. That’s a lot of money for something so limited. More tech junk consigned to the rubbish heap of history. I can’t say I’ll miss it.

Whelp, time to drop the lid on today’s edition of The Morning Dump. Spotify ditching the Car Thing makes me wonder, how do you listen to music in your car? Maybe you have wireless Apple CarPlay, maybe you’re an AM radio fan, maybe you just wedge a Bluetooth speaker somewhere in the cabin. I have a little Bluetooth audio module installed in my 3-Series for the sake of convenience, although I do still break out a 3.5mm cable for when I want better audio quality.

Thomas is a Nu Rave-blaring, heel-toe downshifting, maple syrup-swilling, chassis-geeking, junkyard parts-hauling, floppy-haired scenester who's been writing about cars since college. His current ride is a 2006 BMW 325i with the six-speed manual gearbox. Instagram: @thomas.hundal Twitter: @thomashundal
Read All My Posts »
PrevPreviousBrabus Once Made A Twin-Turbo V6 Smart That Hit 60 MPH In Under Six Seconds, But You Can’t Buy It
NextHere’s The Science Behind How Cars Stayed Cool Before ‘Real’ Air ConditioningNext