Here’s My Final Design Of A Modern Cabover Pickup Truck: A Car Designer Sketches Your Ideas

Remember a few weeks back when you voted for what direction our modern cabover pickup truck would take? Well, in the end it wasn’t even close. Close infers a certain proximity, or nearness. In the final adding up of your choices, first place was so far ahead it was enjoying after dinner cocktails while second place was still putting its makeup on. The runaway winner by a landslide was the ‘friendly’ version, followed by the ‘junior semi’ in second place with about half as many votes. In the interests of democratic transparency, I went through the comments and gave a whole vote for first choice and half for second choice, with a two-taillight margin of error.

[Editor’s Note: I’m kind of delighted to see anything related to “friendly” a winner in the context of pickup truck design. – JT]

It’s important for a designer to have a clear idea of exactly what kind of vehicle they want before they start sketching, even within a given brief. For example remember our EV All-American Wagon? We wanted that to be traditional, without being overtly retro. It could have been super modern or had a raised ride height and still fit the criteria, but that wasn’t what we were going for. 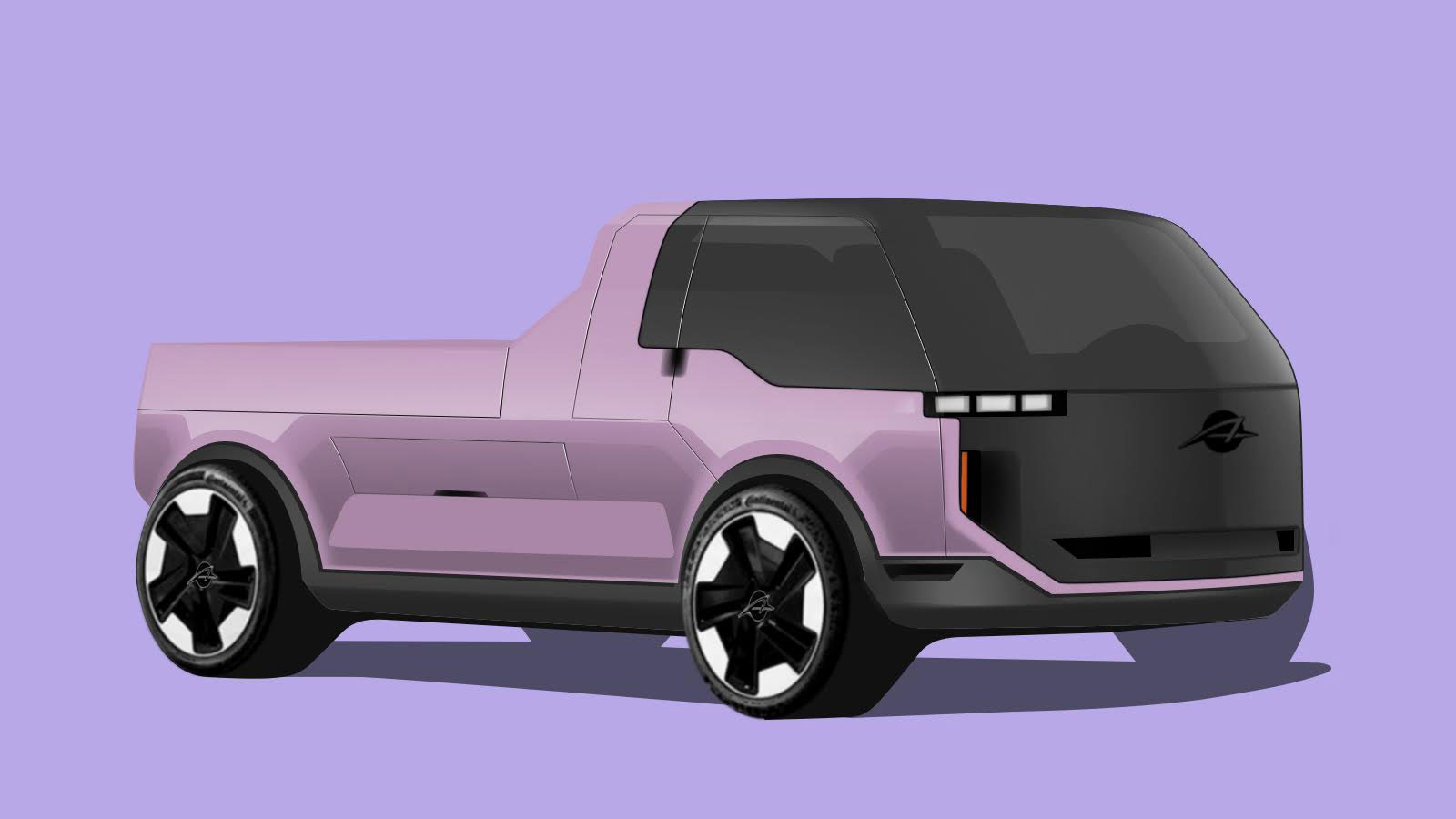 In the case of our cabover, I wanted something that combined utility with civility, like a Maverick but with more practicality. A slick modern car alternative that could be a daily driver and didn’t make you feel like you were on your way to a construction site when you were going to Costco on a Sunday afternoon. Like a minivan, but with an open bed instead of an enclosed space full of squabbling kids trashing the interior trim.

Lots of you were very sharp and mentioned crash regulations, and expressed a preference for your legs not forming part of the crumple zone. Wimps. I saw a (road legal!) Porsche 962 over the weekend. Do you think Derek Bell used to moan about his feet being in line with the front axle? No, he just put his foot down and got on with it.

The truth is you probably couldn’t currently get a traditional cabover through passenger car crash tests. If you look at the Volkswagen ID Buzz, it’s just a very flat fronted minivan shape. The drivers door and front seats are all well behind the front axle line. You could angle the windshield a bit more upright but that wouldn’t gain you anything in the way of usable space. It’s not only crash structure that has to be considered though; modern vehicles have airbags, complex HVAC systems, and multiple control units stuffed into and behind the instrument panel. 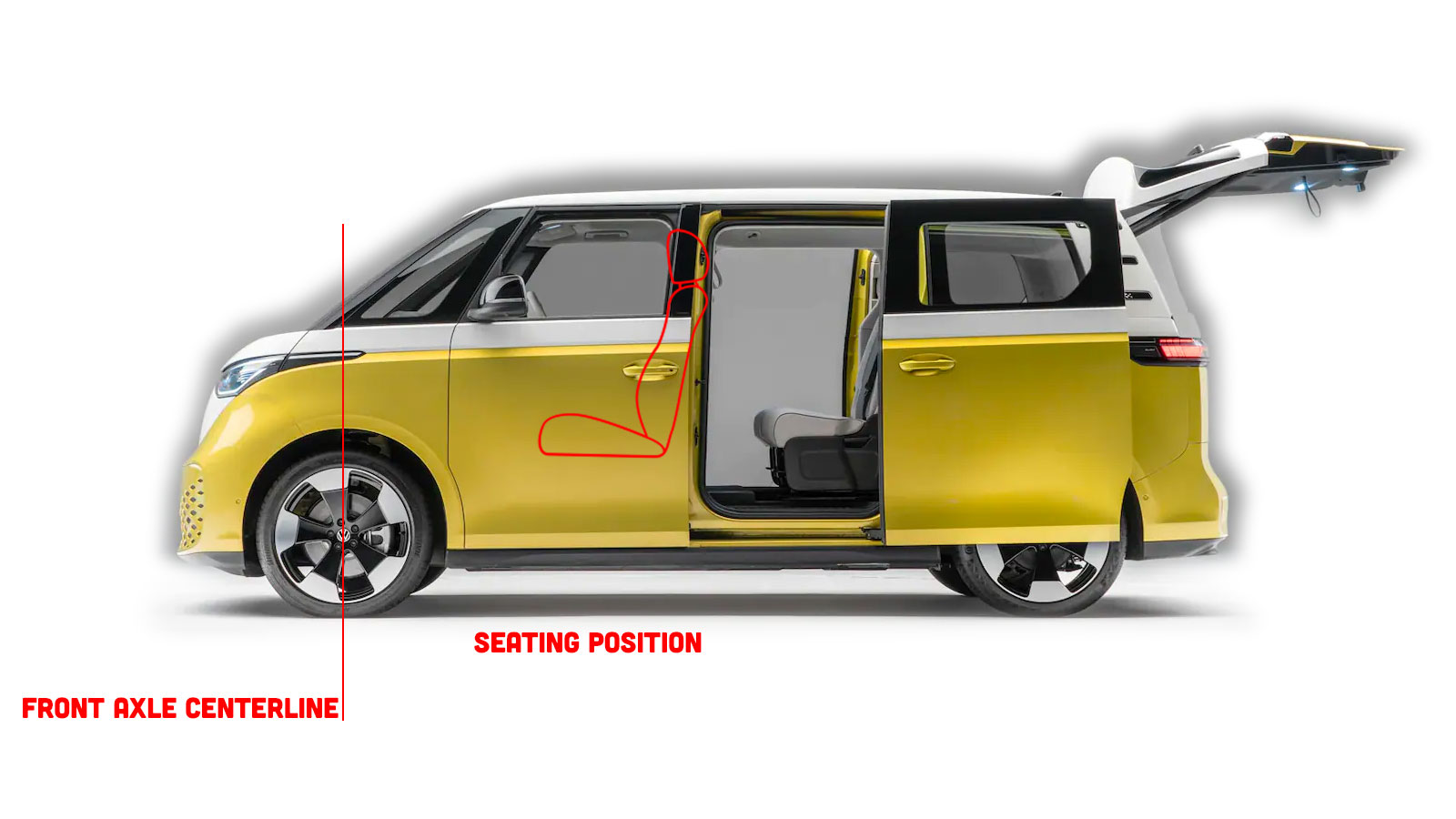 So we’ll have to take a bit of a creative leap of faith here. I did consider bringing the front wheels forward and moving the H-Point (hip point, or how the drivers seating position is determined) rearwards, but I thought that wouldn’t really be in the spirit of the exercise and what we were trying to achieve.

I mentioned about wanting a total length of about 190”, and after overlaying a couple of different images of other cars for scale, I think we’re in the ball park. A few people mentioned having space behind the seats for interior storage, and I agree. Not a jump seat or anything, just a nice warm dry secure area for stuff you don’t want to put in the bed. Like your jacket or your lunch. It does eat into bed length a bit but it’s a worthwhile trade off, as you’re going to be using it more often than the full bed. I used to have an R56 Mini Cooper Clubman and I used that little third door all the time. Design is always a compromise – you can never have everything you want. 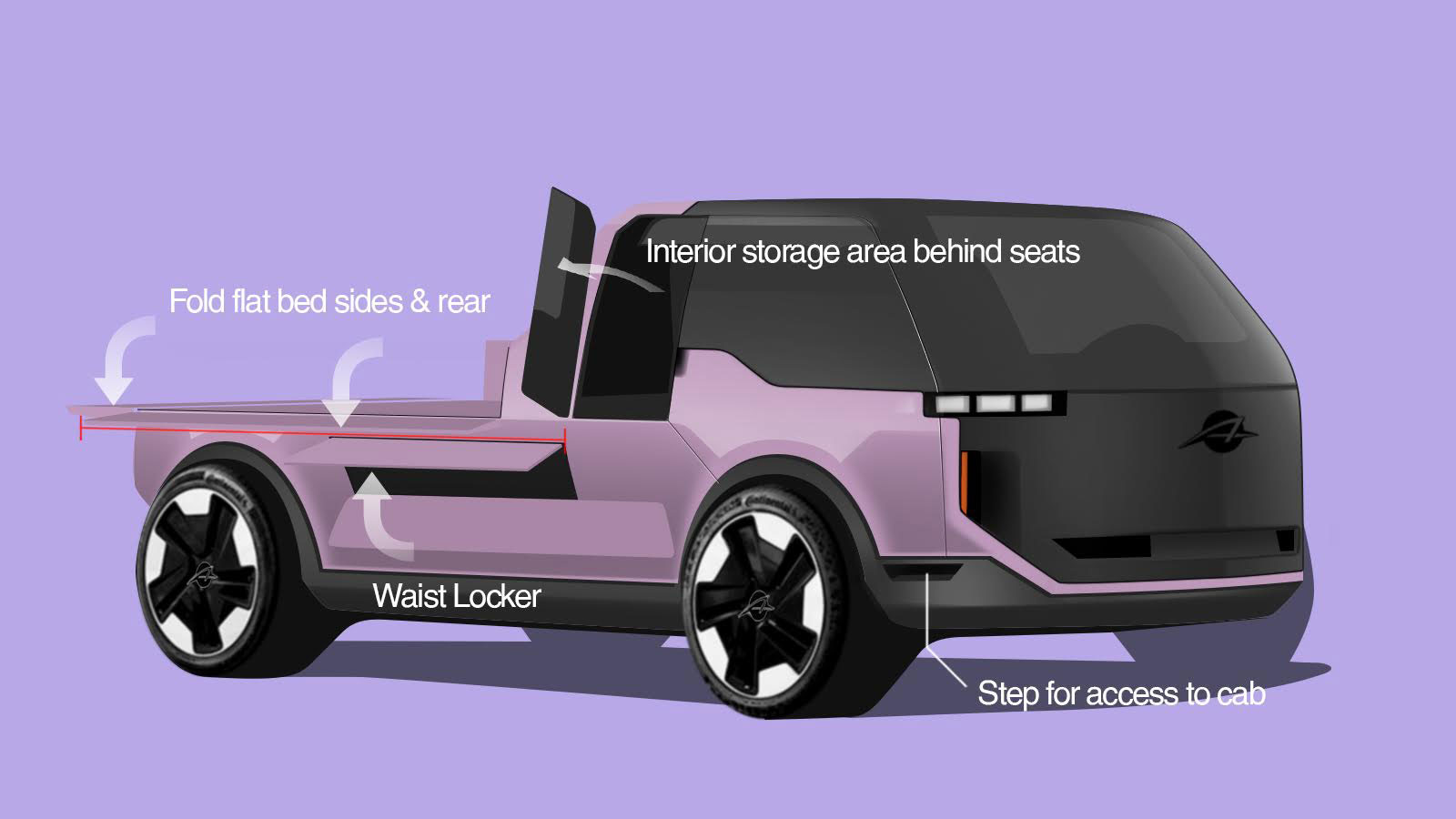 But our cabover has a party trick as can be seen in the second image above. The sides and the rear of the bed can all fold down, and in the case of the rear panel lock into a horizontal position, to extend the cargo area. The red line indicates how long the bed is normally, and you can see it’s about half the total length. If our truck is 190”, that would give us a bed length of about 80” knocking off a bit for the bulkhead. I don’t know what you freaks are going to do with all that, but at least you have it.

Finally we have the waist locker, something that’s been around in various forms in the past and has recently made a comeback with the Rivian thanks to it’s unique architecture. Again, it’s a useful lockable dry space but for stuff you might not want to keep in the cabin, or a sort of chuck stuff in and forget it’s there box, like you might use for tools or something.

Not that any Autopian Motors vehicle needs tools of course – our build quality is fourth to none and our reliability record is exemplary. Each car is signed off by our Chief Arbiter of Vehicle Quality, David Tracy, who doesn’t know a quality car when he sees it.

Professional Car Designer and sometime writer about car design. I have a BA in Automotive Design and a Masters in Vehicle Design from the Royal College of Art in London, where J Mays was my tutor. He used to bring in donuts. I was hired from there into a major European OEM. I daily drive a 2011 L320 Range Rover Sport and also own a 1983 Ferrari Mondial QV.
Read All My Posts »
PrevPreviousGermany Says No To A Ban On New Combustion-Powered Cars
NextThe Tiny Bede BD-5 Was A Homebuilt Plane With Remarkable Abilities, And An Appetite For BloodNext