Lane Motor Museum’s restoration shop is one part of the museum that isn’t really open to the public. The shop staff allowed me to walk around and take notes and pictures without too much complaining and yelling at me. Come with me as we tour all the strange, exciting, and occasionally mystifying projects.

This levitating Tatra is actually getting some brake work done.It’s been in the shop before, but after a recent drive, it was brought to the shop fora mushybrake pedal feel. Sure enough, the brake shoe shad developed a hairline crack and has started to delaminate, so they were sent off to be relined.

Whilewaiting for the brakes to come back, Nick noticed a there was quite a bit of oil leaking out from around the rear half shafts. There are a series of boots around those half-shafts: a two-piece inner plastic boot and two layers of outer leather boots to keep debris out of the shafts. As you can see in the picture, the outermost leather boot was caked in oil. Most likely there are some pinhole leaks that are seeping oil.

Here’s a shot of the T97’s front leaf spring setup, just for fun: 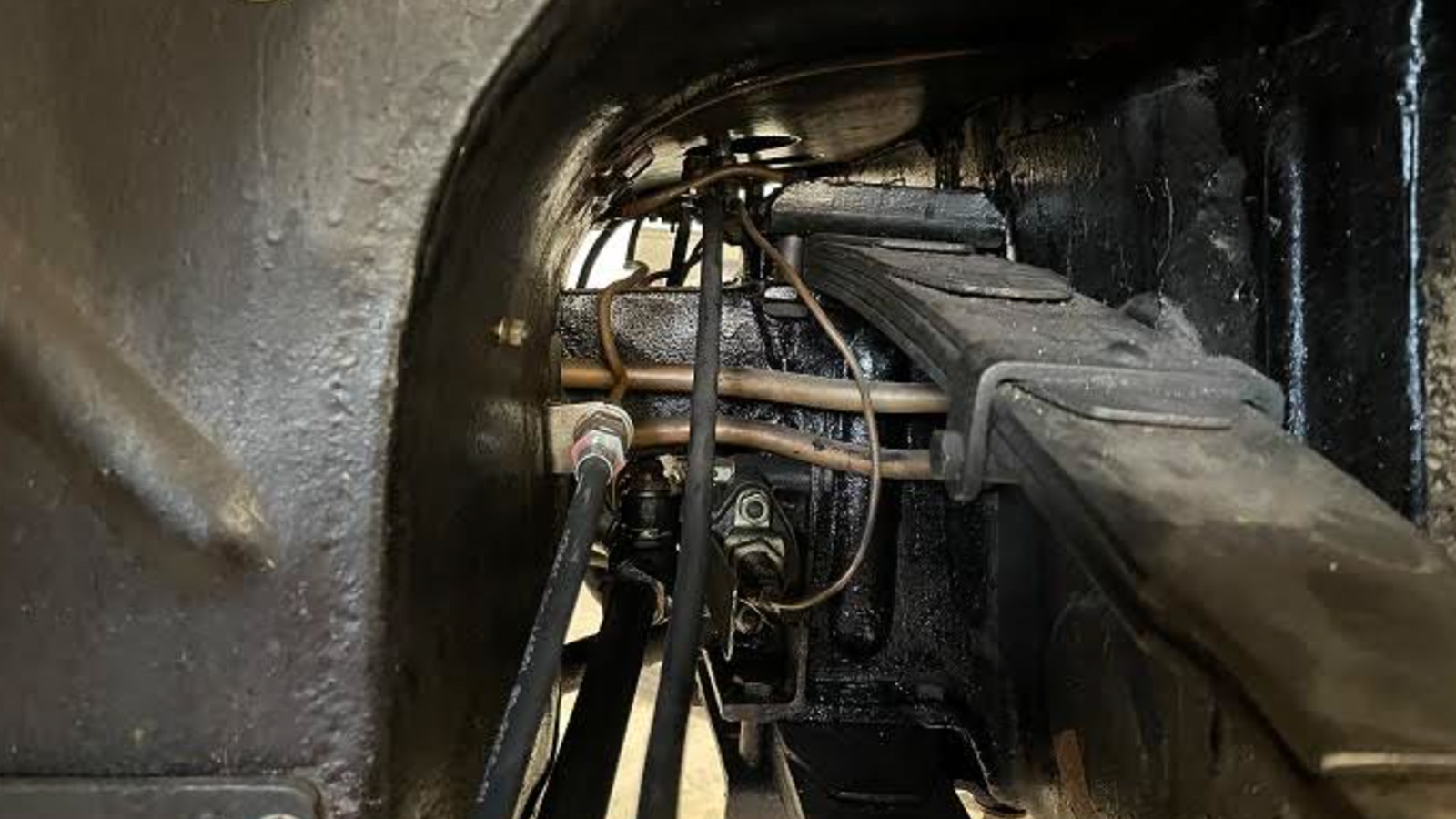 In 1951, AMC designer Ben Gregory constructed this (front-mounted!) Porsche 356-engined, front-wheel drive roadster in an attempt to start a new car company. It’s getting its door hinges touched up while the carpeting is getting installed.

The rear bumper, taillights, and name plate have been installed, and the seat frames are getting repaired and repainted. The steering wheel was sent off for restoration, which our shop fabricator Michael will need to ensure the seats will fit correctly.

[Editor’s Note: Look how flat that floor is! Flat-four up front, flat-floor inside. They should have used that in their ads. But they never really had ads. – JT]

The gauges for the (sort of) amphibious Hobbycar B-612 finally are installed in the binnacle, but a new issue has developed before we can send this one back to the lake, or road, or both.

The B-612’s Citroën-sourced hydro-pneumatic suspension allows for a range of height-adjustability. Pneumatic cylinders at each wheel counteracts the natural sag of the unloaded suspension in the water, and pulls wheels up tight to reduce drag. We are having trouble balancing the ride-height for on-road use…. it keeps trying adjust the suspension during parking lot driving.

This lovely little S800’s primary brake cylinder went out, so we are waiting for a new one.

The S800 was the successor to the chain-drive S600 Roadster and Coupe, and has an amazing 8500 rpm redline. These were never sold in America, which is a shame, because it’s the epitome of slow-car fast, in my opinion.

This mid-engine, rear-wheel drive French sports car is in for a tuneup, brake work, and an oil change. I know, not terribly exciting stuff, but it’s French and from the early 1980s so I’ll update everyone when a new issue inevitably pops up during this routine maintenance.

The Murena and its predecessor the Bagherra were known for their three-across seating, unusual for a sports coupe. While the middle passenger’s legs looks like they would fit to the right of the shift knob, it still brings back memories of riding in the middle of the bench seat of my stepdad’s old manual Ford F250, and having to uncomfortably splay when he had to shift from 3rd to 4th gear.

Also of note: this was back when your dash badging proudly displayed the engine’s displacement.

This little multi-purpose van from Germany was built by Lloyd, the low-cost, entry level brand of the Borgward family of cars. The ignition switch is loose, so we are carefully reinstalling it with new hardware into the thin wood dash.

All Photos: The Lane Museum