Occasionally, there will be something from pop culture that influences trends in what people do to their cars, but it’s not common. Usually when it happens the pop culture in question is tied pretty directly to automotive culture in some way, like how the Fast and Furious movies made people  install 20-gear transmissions in their cars. Rarely, though, there will be a non-car-focused movie that spawns trends in car customization to the point where aftermarket companies are selling parts just to fulfill the demand spawned by the movie. And when I say “rarely,” I mean I can only think of one pop cultural thing that fits this category, the 1972 blaxploitation film Super Fly.

Yes, Superfly. It’s very much a blaxploitation film, and likely doesn’t really portray the best archetypes of characters, especially to modern eyes, but mostly I just want you to see the hero car in the film, which is featured pretty prominently in the trailer:

See that thing? It’s a car that’s based on a 1971 Cadillac Fleetwood Eldorado, modified by a company called Dunham Coach. That distinctive, over-the-top, chrome-slathered, pimped-out look is largely the creation of Les Dunham, at least according to him, in this video, which also lets us know that he made the Corvorado (a Corvette/Eldorado hybrid):

All of the exuberant and flashy bits bolted onto these Superfly cars, the oversized grille caps, those genuinely bonkers massive three-bar faux headlight things that fit over the existing quad sealed-beam headlamps like Sally Jessy Raphael’s spectacles, all of this Superfly crazy chrome candy was made available to the common, Normalfly people thanks to the magic of the JC Whitney catalog (I went a bit into the history of the catalog in this post).

Thanks to our own social media guy Peter, who sent me an old 1974 catalog, I can show you exactly how you could Superfly your own ride, in the comfort of your own driveway or lawn. Just look at all these Superfly options you could have: 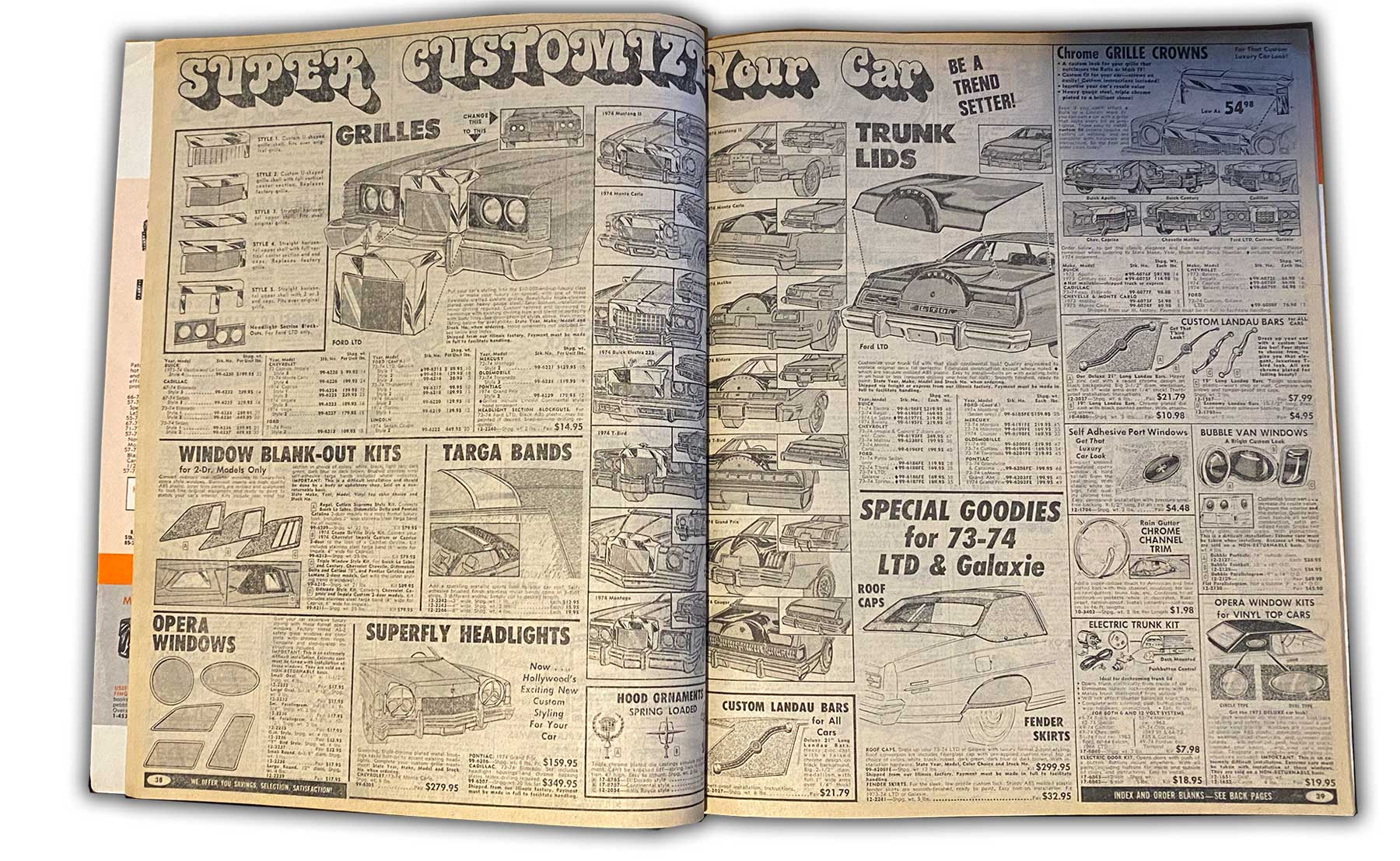 Holy crap, that’s a lot of options! Can one car support this much superlative fly? I have no idea, but I suspect many, many people pushed those limits to see what was possible. Let’s look at some of these options in detail: 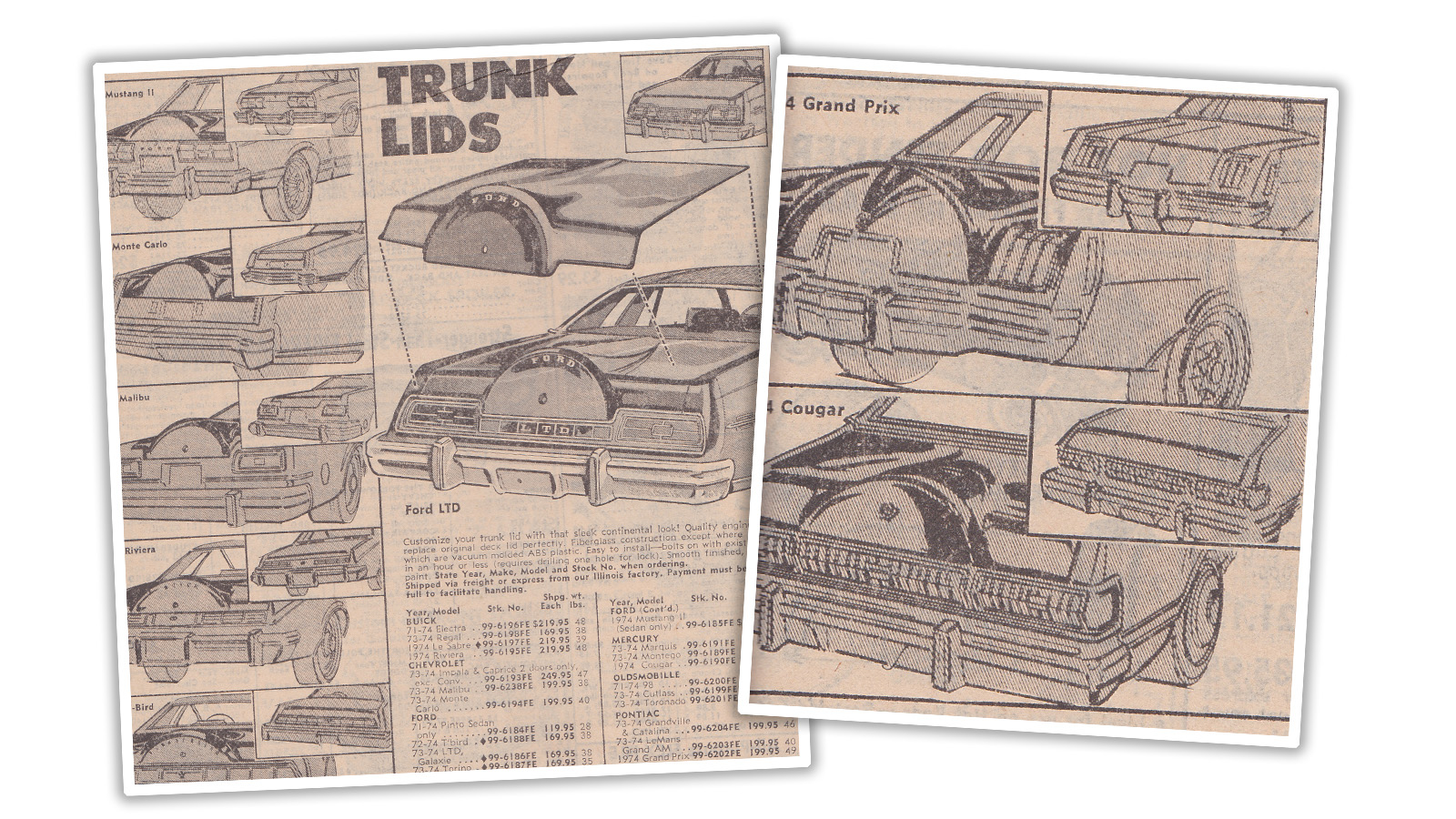 Why should Lincoln Continentals have all the fun of pretending to house a spare tire upright in the back of a trunk and not you? They shouldn’t, which is why you should be thrilled that you could get a Continental-style trunk lid for a huge variety of American cars, including the Mustang II! It’s also perfect if you haul a lot of tall, round items in your trunk, like cable spools or huge pizzas, stacked vertically like books on a shelf. 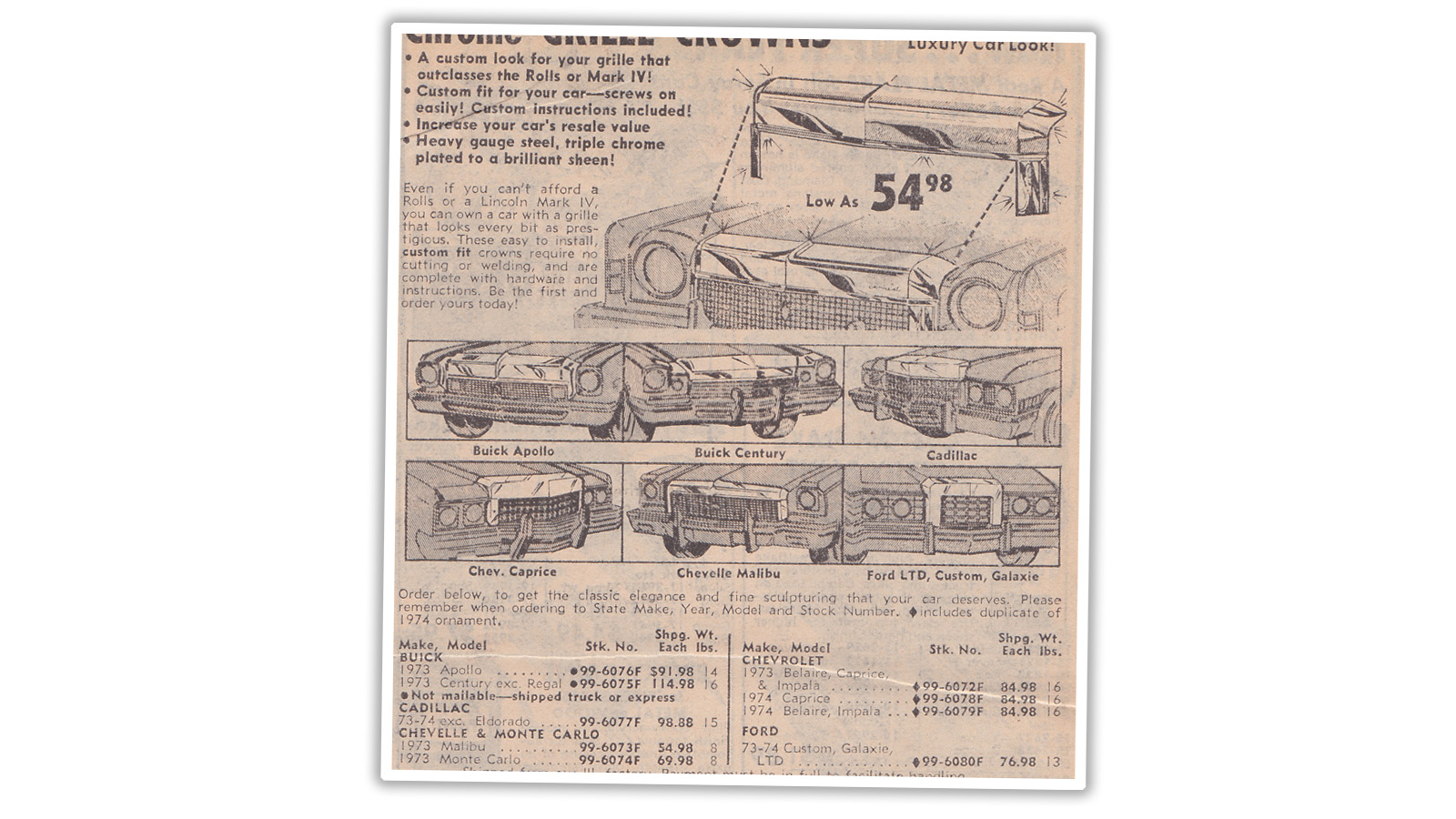 Grilles are a big deal, visually, and go a long way to defining the face of a car. So, if you found that even 1970s exuberance wasn’t enough to satisfy your exhibitionistic grille demands, JC Whitney had your back. If you felt your grille was close, but just needed a little bit of goosing, you could get a Grille Crown that you just popped atop your existing grille, like a little chrome hat.

I like how the copy for these things says:

“Even if you can’t afford a Rolls or a Lincoln Mark IV, you can own a car with a grille that looks every bit as prestigious.”

I’m sure this was absolutely true, and valets would be thrilled to park your Mustang II out front, right next to the Rolls-Royce Silver Shadow that is quite clearly your car’s peer.

If a grille crown wasn’t enough, there were full grille replacement options, too: 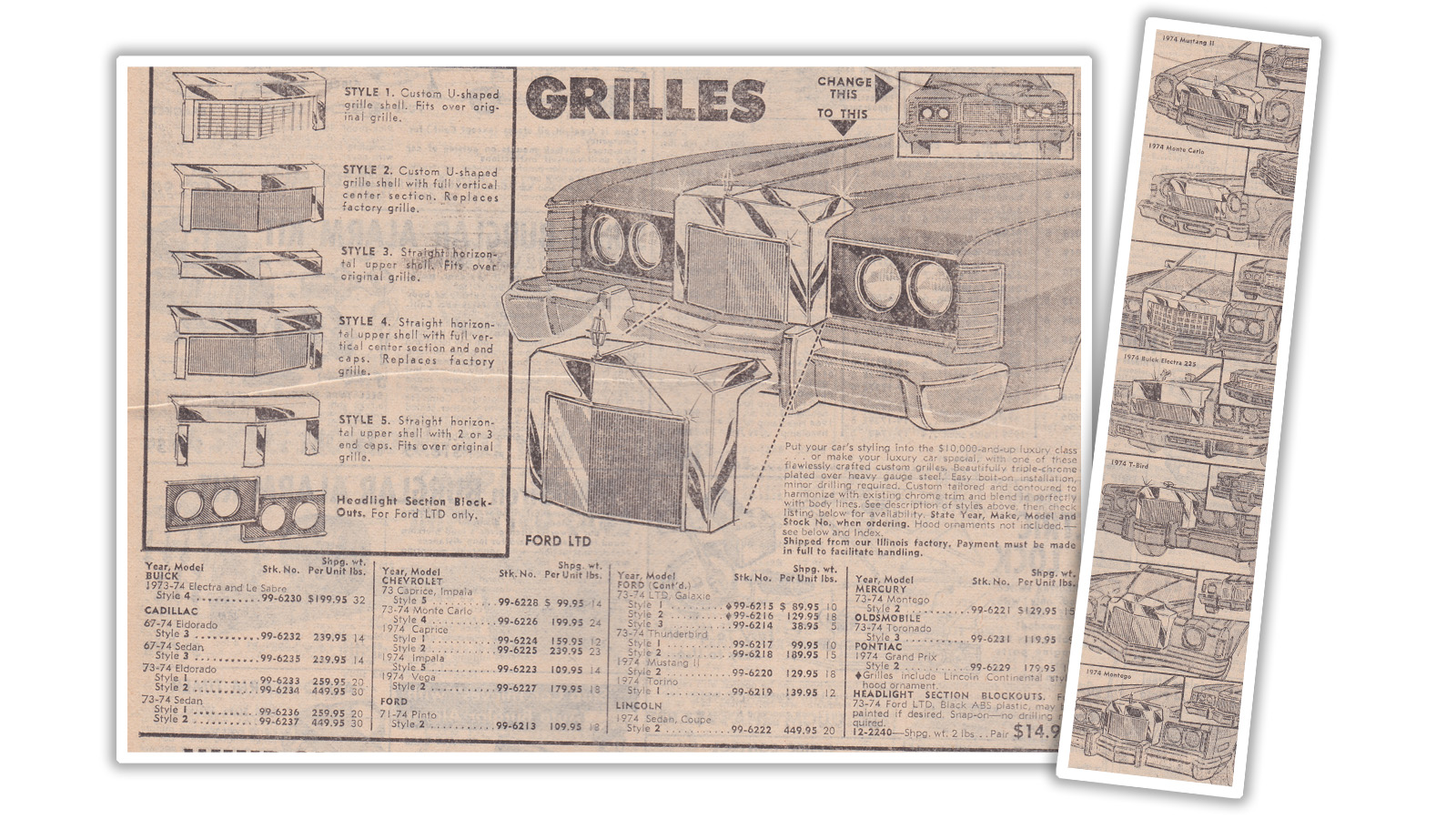 Some of these were in separate parts you had to assemble around your old grille, some replaced the grille outright, but all gave your car the gravitas and presence of a machine that pushed around a chrome model of the Parthenon on its face. 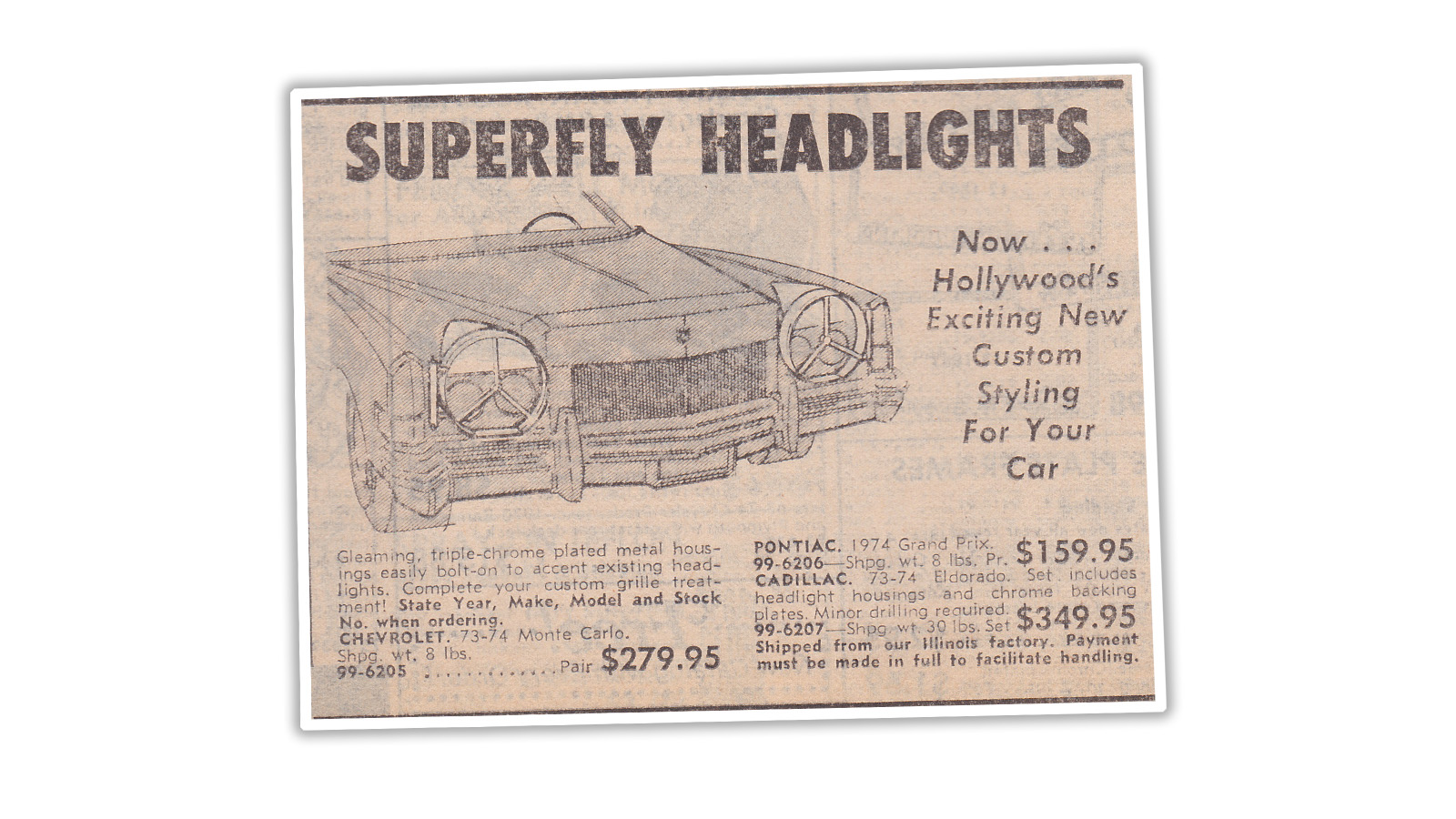 These Superfly Headlights are probably the most distinctive and noticeable bolt-on your could add to your car to really lean hard into this look. Designed to evoke the massive headlamps of cars like 1920s and 1930s Rolls-Royces, with their tri-bar internal supports and gargantuan size, these units fit over two sealed beam lights per side and extended up and above the car’s hoodline, to give the illusion of being separate lamps.

I think these light covers give the car a strange, myopic look, but who cares? These things definitely can’t be ignored. 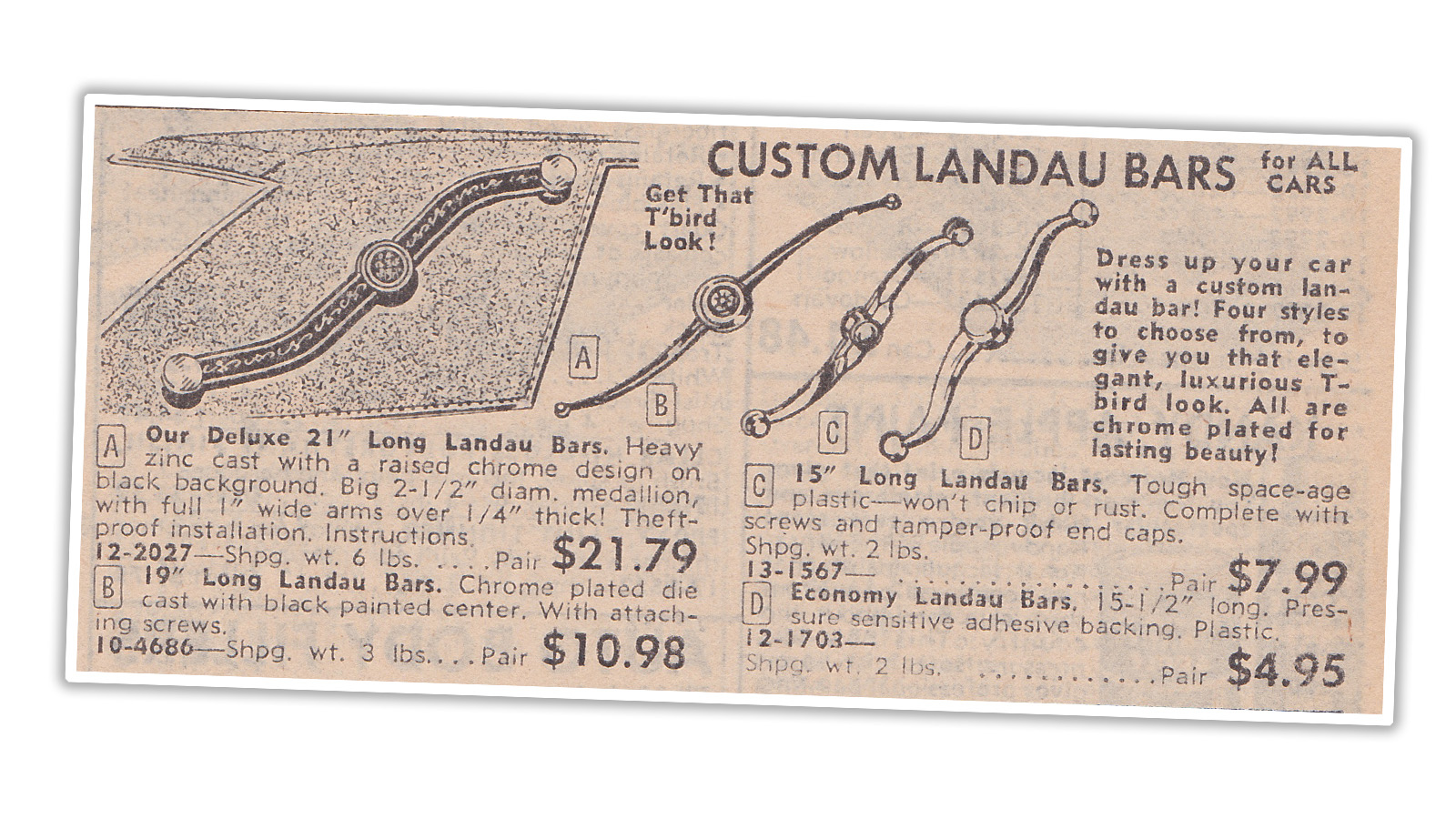 Landau bars are strange things in automotive design. They started out as literal, functional hinges for convertible tops, and then somehow became so synonymous with wealth and class that they’re now an expected part of a hearse, a vehicle about as unlikely to be a convertible as anything I can think of: 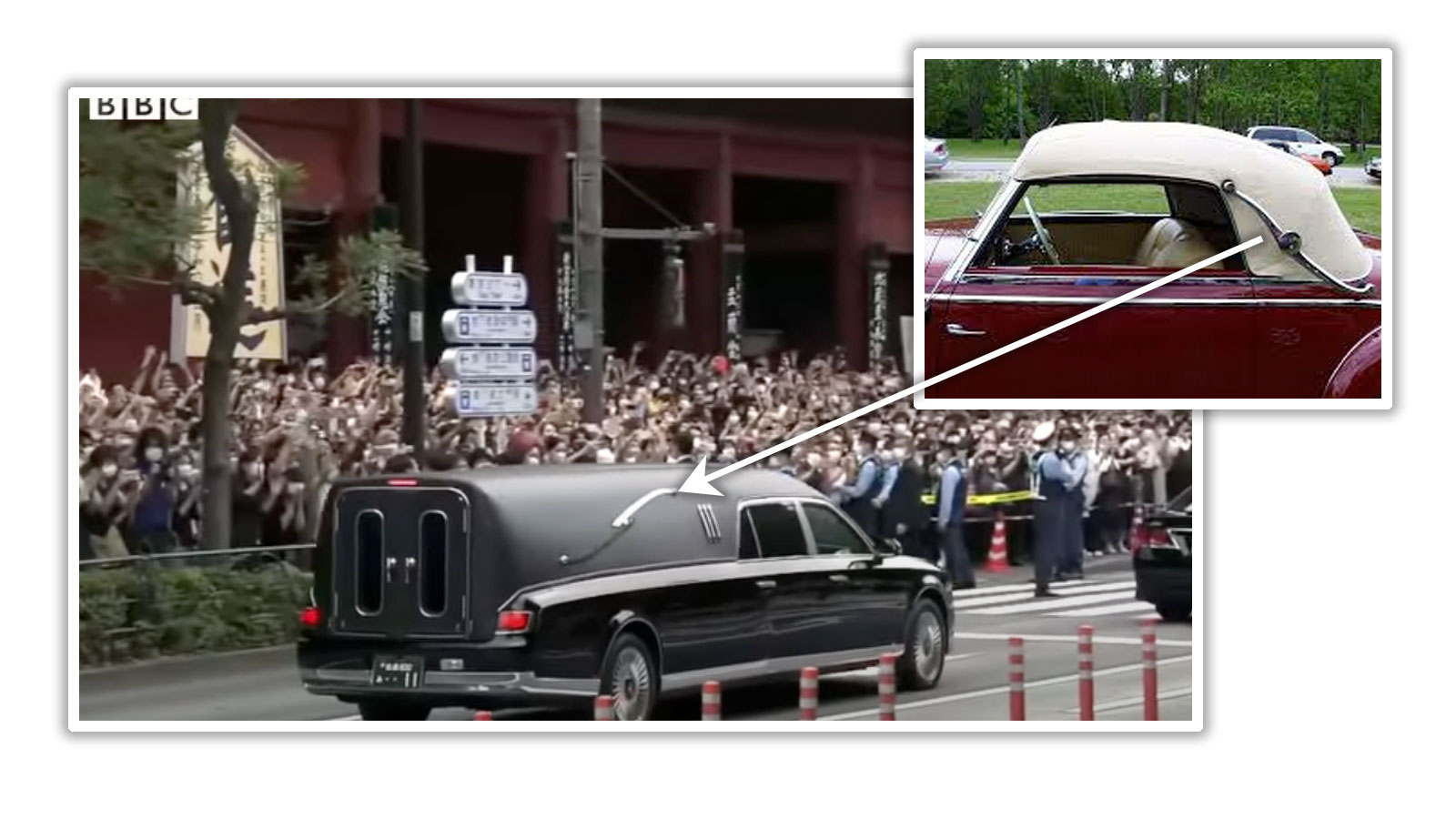 In 1972, though, they definitely suggested classy, with a capital “assy.” So I’m not surprised JC Whitney offered four different stick-on landau bar options. They make as much sense on the C-pillar of a coupé as they do on a hearse, so why not live a little? 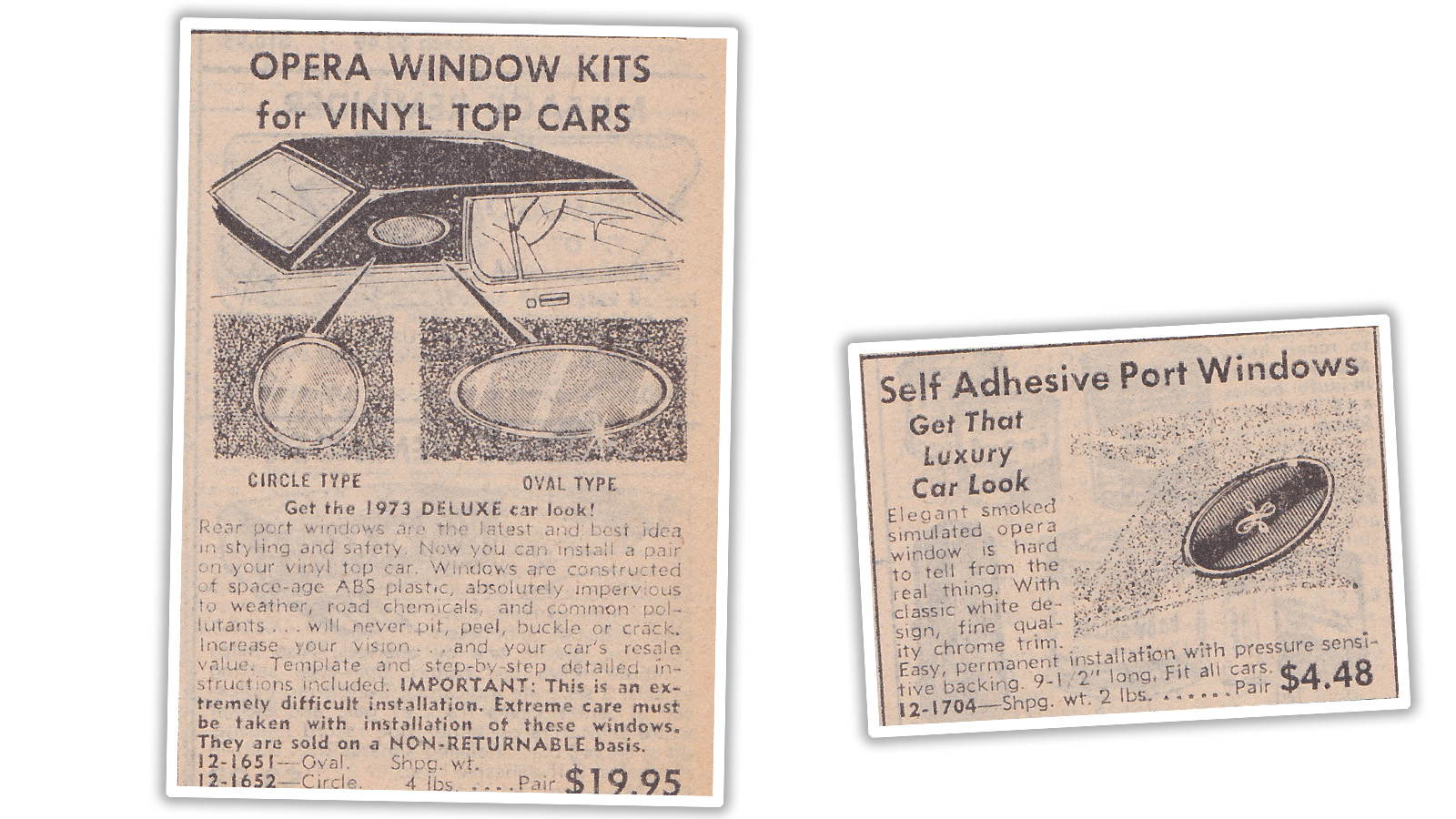 Speaking of C-pillars on coupés, this period was definitely the Golden Age of the Opera Window. Opera windows were strange little portholes in the C-pillars, I suppose offering more sensual privacy for whomever was in the back seat doing whatever, and if you were so miserably impoverished as to be saddled with a car that lacked opera windows, old JC was here to help.

I think it’s worth noting that you had two very different options: real opera windows that were actually, you know, windows, that you could see through, but those were difficult to install, requiring cutting holes in your car and all that. The catalog made a point to note the difficulty of the installation with a big IMPORTANT: Warning. And, they reminded you that these windows were non-refundable, so when you found yourself with a crudely hacked-out window hole the shape of Cuba, no, you can’t return the window.

That said, JC isn’t going to leave you hanging! You can get something almost as good for way cheaper and easier: a “Self Adhesive Port Window!” Essentially, this aplastic sticker of an opera window you can just slap on your roof. It won’t do shit to make the inside of your car less dark or claustrophobic, but you’ll think it might from the outside!

Too bad JC Whitney couldn’t have llicensed this fantastic Acme technology that would have made these so much better. 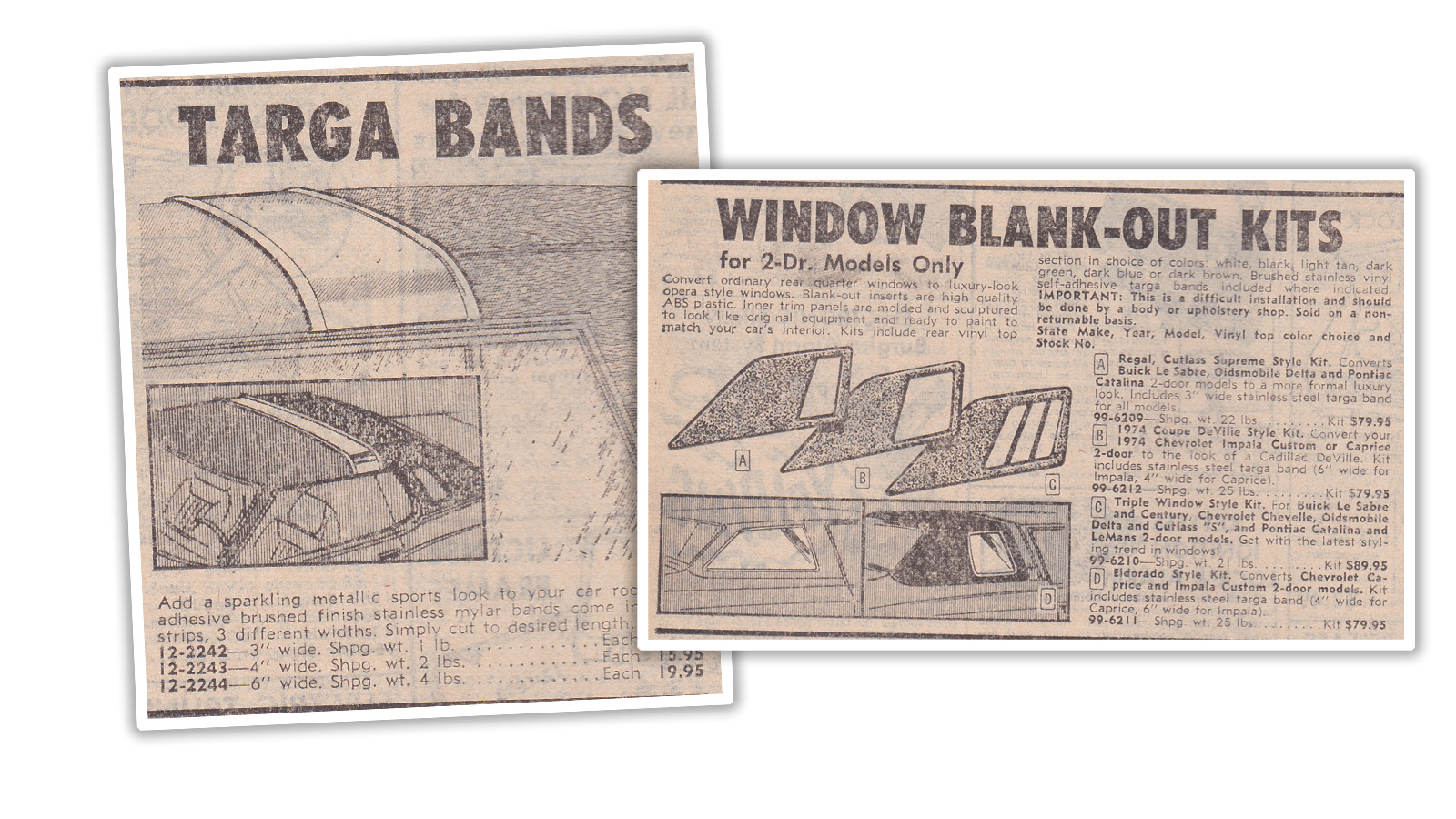 These last ones I want to show you are quite strange: that Targa band feels more like something you’d find on a European car, like a Porsche 911 Targa, and as such is kind of out of place in this context. I guess it would still dress up a roof with a belt of brightwork, even if I don’t really think it looks like a Targa top.

Those other things, the Window Blank-Out Kits, are a strange sort of way to convert a normal, full-sized window into a much smaller opera-style window. Or, windows. I think to sell this you’d have to throw some vinyl over everything, but I suspect that’s just fine, in this context.

Honestly, I kind of love that all of these options existed! Say what you will about the aesthetic, but you can’t deny that people who bought and install this stuff had to be absolutely loving the shit out of their cars, and, really, that’s what matters. Have at it! Be as superfly as you want to be.

I'm a co-founder of the Autopian, the site you're on RIGHT NOW! I'm here to talk to you about taillights until you cry and beg me to stop, which I absolutely will not. Sorry. Hug? Also, David's friend.
Read All My Posts »
PrevPreviousWatch An Absolute Legend Use Their Jeep Wrangler YJ To Tow A Farm Implement
NextHere’s What It’s Like To Maintain The World’s Quirkiest Car CollectionNext