Yet again we find ourselves unable to use the internet this week because the whole mess of tubes is clogged up with BMW fans yelling into cyberspace about the latest release from Munich. People, you’ve been upset by BMW horror shows for a few years now. They’ve even baited you about it on social media. The past is gone and it’s not coming back. If the internet was around in 1986 when the first M3 was launched, do you think the BMW propellor heads would have been complaining it wasn’t a rear engine 700? Well, it’s not 1986, it’s 2022, and there’s a new BMW M2 with a design that needs to be discussed. So let’s discuss. 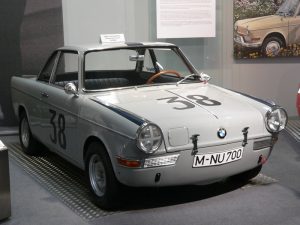 Origins of the M

The M3 wasn’t born from a dream to build the ultimate road going three series. It was a Group A homologation special, and BMW had to build 5000 road cars to enable it to race in the Deutsche Tourenwagen Meisterschaft (DTM). Most eighties homologation specials were a bit bonkers – mass market hatches and saloons stuffed with weapons-grade racing parts that made them a bit awkward on the road. Peaky multi-valve engines, dogleg close ratio gearboxes, turbos the size of oil barrels with lag for days, that sort of thing. The M3 occupied a sort of middle ground between the uptight staidness of the Mercedes 190E 2.3 16 and working class lairyness of the Sierra Cosworth. Despite this stiff and ever evolving competition on and off the track, BMW ended up building nearly 18,000 of the things. The glory days of European technicolor tip tops knocking lumps out of each every other weekend have long since passed, but the M3 has stuck around as the ultimate expression of what BMW as a brand used to stand for, the very soul of their being. 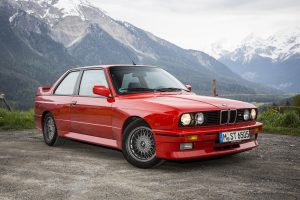 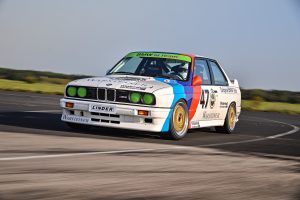 As the M3 has evolved from scalpel to hammer, a void has been left underneath it, filled since 2015 by the F87 M2. The cooking versions of the 2 have long been seen as the spiritual carriers of the E30 torch, and the M2 the M3 without the weight of expectation. And yes, I will keep saying M3. Numbers haven’t meant anything to BMW for a long time so I’m just returning the favor. The M3 is what Will Hoy won the 1991 British Touring Car Championship in. The M4 is a motorway that runs from central London down to Devon and Cornwall. 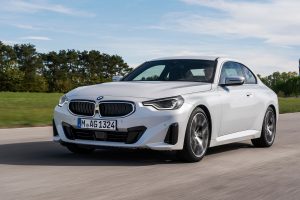 The BMW and Triangles Problem 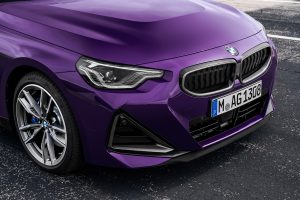 What is it with BMW design and triangles recently? The 2 series has been valiantly holding the line against the worst excesses of the rest of the range, but the base model 2 has a triangular transition from bumper to air vent. On the M Sport models they’re even more brutal with an inconsistent offset to the trim piece within. They totally clash with the shape of the headlights. 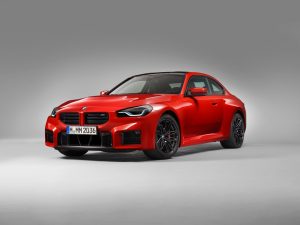 The new M2’s first improvement then is doing away with these three sided monstrosities completely. In giving the M2 a new front bumper, they’ve flattened off the lower line of the headlights, and made the vents a four sided shape. Along with a slight downsizing and re-profiling of the kidney grille the whole front graphic is much, much tidier and better resolved, and compared to the normal 2 the different elements are no longer fighting each other. The only issue is the weird gap on the top of the headlights where the hood meets the bumper. That’s horrible. 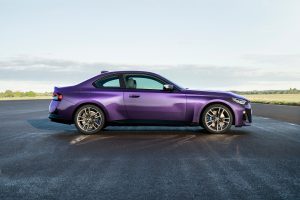 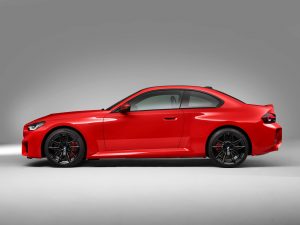 The side view is not much changed apart from the reversion to a body colored rocker panel. It’s curious from a model differentiation point of view because the base 2 has body colored rockers, and the next trim up, M Sport has them in black. I’m invoking chief designer’s prerogative and going to slightly contradict something I’ve said in the past. I think body colored works better here, because the 2 is a (relatively) small car, and the M Sport 2 looks a little stretched and weak in between the wheels because there is less body color to read.

It’s hard to tell from the press photos, but I suspect the front fender is unchanged because the highlights and shut lines are exactly the same. The M2 does have an extra inch of track over the standard car, but differing wheel offsets or Photoshop could be keeping the wheel to arch ratio similar. This is the problem with doing this sort of crit from press photos, and not seeing the actual car. So caveat emptor and all that. 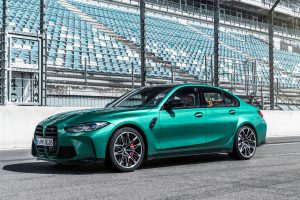 Speaking of highlights, judging by the distance they run back to meet the feature line running the length of the body, I think the transition from flared arch to body side could be a more gradual. It’s known as “lead in” and refers to how abruptly a surface changes from one direction to another. Take a look at the area around the rear quarters on an M3 to see how to get this calamitously wrong, because that car uses the same rear doors as the regular 3. Overall the side profile is pretty good, the proportions and volumes are in balance and it’s not overcomplicated. The straight on orthographic side view is always unflattering because there is no perspective, which consequently makes the overhangs look worse. You can never look at a car like this in real life, which is another reason studios use full size physical models as opposed to working solely digitally. 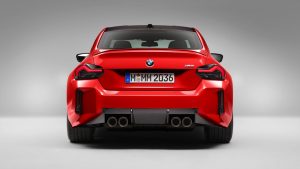 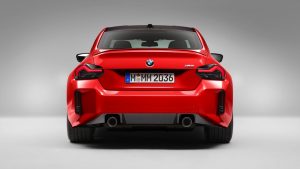 Tail lights and trunk lid appear to be same parts including the lip spoiler, but the bumper is a new part. I don’t like the way the diffuser is so prominent and cuts into the vertical surface running in between the rear vents. I find it hard to believe that it’s contributing much in the way of meaningful downforce looking at the shape of it, and the whole lower rear just feels fussy and busy, not helped by the fact there’s four exhaust tips crammed into a small space. Nudge them outwards or try just having twin exhausts to reduce the clutter. Lastly I think the vertical black vents need a bit less Z height – they’re forcing the feature line too close to the lower line of the tail lights, giving the surface below the lamps a bit of an overdone Brazilian butt lift feel. 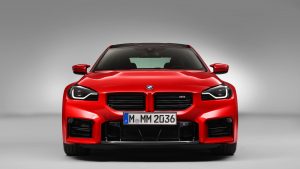 The M2 is overall much more successful than the boggo models, but subtle it isn’t. It feels a bit OEM does aftermarket imported body kit. The blockiness of the front vents do integrate a lot better over the standard car, but if they were softened ever so slightly or had the lower out corner chamfered off (to match the inner top corner) the front graphic would be much more successful. The less said about the sensor placement the better, but there was probably no other way of doing it.

I’m not an interior designer, so I’ll keep my comments to the display. We’ve seen this sort of bullshit recently in the S650 Mustang. What bugs me here is the M Sport 2 series has a digital display for the driver housed in a binnacle, and a separate display in the center. This is supposedly the next step up in technology but functionality aside it just looks so much worse. Judging by the lack of buttons I’m guessing a lot of the secondary controls have moved onto the touchscreen, with all the safety and usability issues that entails. This is a car that is supposed to be about quality of interaction and immediate tactile response isn’t it?

(UPDATE: Despite what these launch images show, the iDrive CinemaScope screen is standard across the range now. Sorry for the mix-up.) 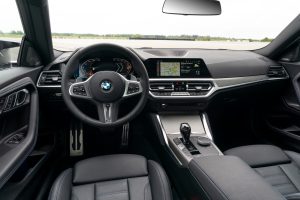 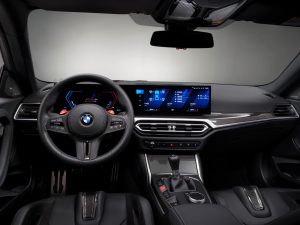 One thought I’ve seen repeated online about this car over the last few days is that give it time, and in a few years once we’ve got used to it, we’ll like it a lot more. I’m not entirely sure I buy into that line of thinking. When you’re designing a car from scratch that is the case; you’re working on something for five years time – you’re supposed to try something new and novel. We called it “soak time”; do something different and then pore over it for a week or two and see if it works. Thing is, you usually know straight away if you’ve done something really good. 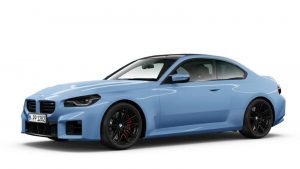 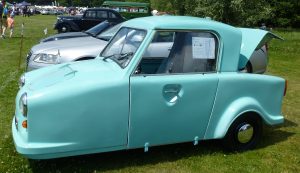 Really my main boggle with the new M2 is one that’s easily sorted. It needs the optional turned face alloy wheels (I don’t like black wheels as they hide the spoke pattern, but I get that customers do like them). Secondly the color palette isn’t great. In fact for such an expensive car it’s very limited. Your standard non-metallics are white or something called Zandvoort blue, which is a weak pastel shade that flattens the body work and brings to my mind British Invalid carriages from the past (see above). Yuck.

[Editor’s Note: Hey, that “invalid carriage,” the Harper Invacar, that Adrian chose as an example there was one of my choices for what the Simpson’s “Put it in H” car could be! – JT]

The three optional metallics are black, grey and Toronto Red, which is the one used in all the press shots. Three of these colors are shared with the normal car (white, metallic black and metallic grey), and I think something bolder like Golf Yellow would help a lot. Thundernight Metallic is a sweet purple that you can get on the standard car, and all versions go down the same line, so why isn’t it available on the halo car? 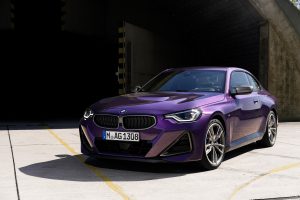 I don’t dislike the new M2, but I’m not bowled over by it either. It’s probably the best looking car BMW currently makes, but that’s really grading on a curve. It’s not the subtly aggressive BMWs of yore – but BMW hasn’t done the loud part quietly for a long time now.

Professional Car Designer and writer about car design. I have a BA in Automotive Design and a Masters in Vehicle Design from the Royal College of Art in London, where J Mays was my tutor. He used to bring in donuts. I was hired from there into a major European OEM. I daily drive a 2011 L320 Range Rover Sport and also own a 1983 Ferrari Mondial QV. I always wear black, love goth music and have way too many books. twitter: @adrianfclarke. Instagram: adrianfclarke
Read All My Posts »
PrevPreviousLow-Mileage Retro-Mobiles: 1998 VW New Beetle vs 2003 Chrysler PT Cruiser
NextFrance Will Give Bigger Electric Car Rebates To People Who Make Less MoneyNext