Good morning! On today’s Shitbox Showdown, we’re looking at a couple of old cars that were made to look like classic cars when they were new, but now they just look old. (Did that make sense?)

First let’s finish up on our imported hot hatches from Friday:

Close one! And I was watching the votes on Friday – it was tied several times. I had a hunch the Honda City was going to end up winning, but apparently the Alto had enough of you singing a different tune to give it the win.

So: Onward. There was a fad in the late 1990s and early 2000s that you may have noticed: Automakers jumped on the nostalgia bandwagon with both feet. Everything from the Mini Cooper to the Ford Thunderbird was given a retro makeover, and new models were introduced with old-school design elements. Some were wildly successful, some not so much. The two we’re going to look at today enjoyed huge popularity when they were first introduced, and in the intervening two decades have become fixtures on the used car market. Are they still worth a look, way down at the bottom of the depreciation curve? Well, let’s take a look and find out. 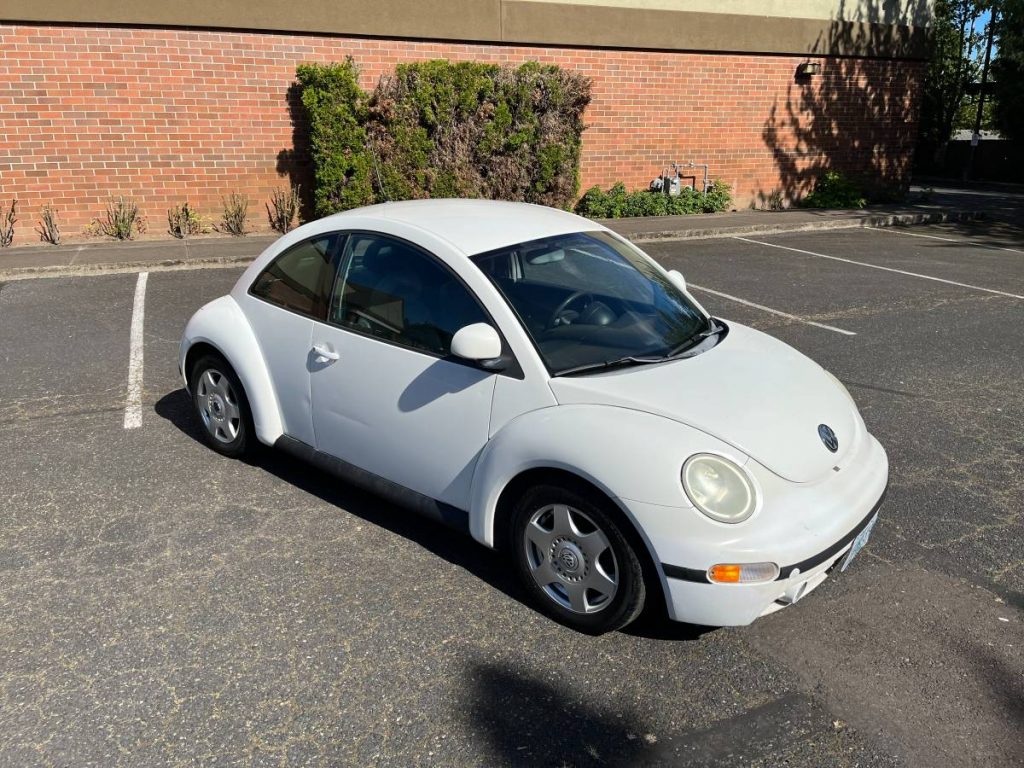 I confess I did not like the new VW Beetle when it was introduced. I think it was primarily because I am such a fan of the VW Golf, a no-nonsense hatchback that does so many things well. And here was a car on the same platform that was nothing but nonsense – all awkward proportions and wasted space. It just did nothing for me. But apparently it did something for a lot of car buyers who remembered the old Beetle fondly: VW had a hit on its hands. But the honeymoon was short-lived; the aging college professors and hippies who had been able to keep their old ’60s Beetles running with nothing but a flathead screwdriver and a John Muir book were suddenly faced with the reality of a modern Volkswagen and all its foibles. 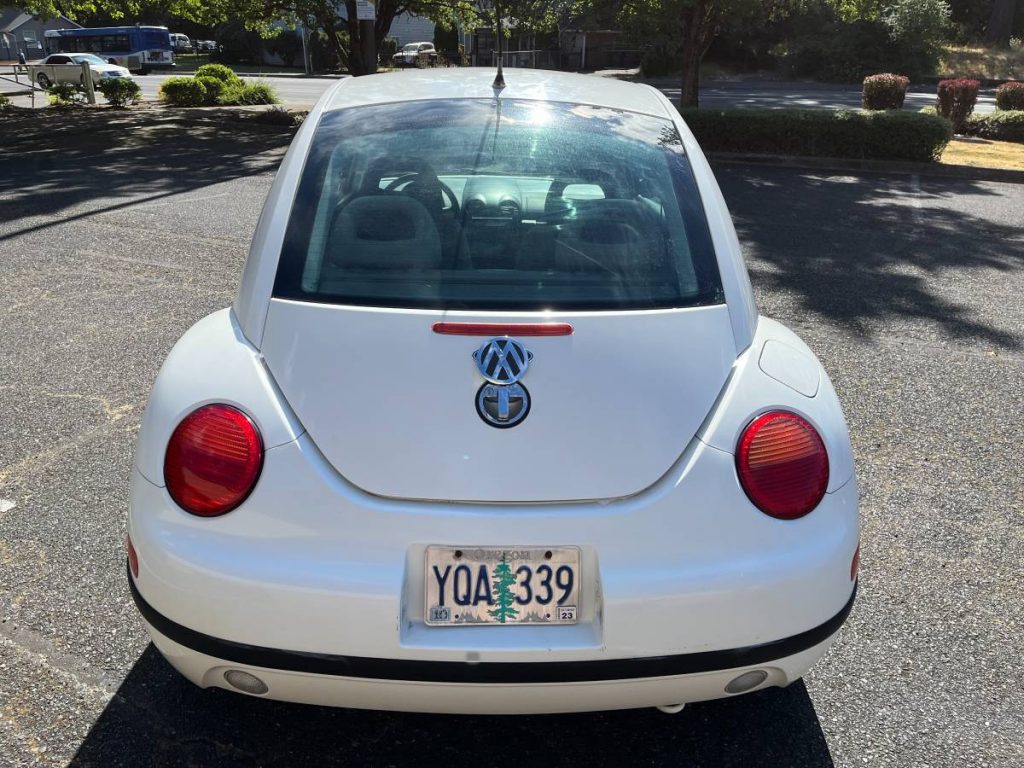 But the New Beetle’s charm was great enough that it hung around for twelve years, before being replaced by a new New Beetle, which stayed in production until 2019. It’s a far cry from the original Beetle’s half a century run, but it’s nothing to sneeze at. The Beetle was offered with a few different engines over the years: This one has the standard garden-variety 2.0 liter naturally-aspirated four. It’s nothing special in the performance department, but it’s probably the most reliable of the bunch.

[Editor’s Note: That black stripe the owner added on the bumper is interesting; I wonder if they were trying to emulate the black rubber strip – either tape or rubber – found on the simpler 1968 and up “Europa” bumpers ? I kinda like it. And I’ve always had a soft spot for these. My parents had a yellow turbo New Beetle, and it worked for a cute, tiny older couple zipping around in it, with a license plate that read YOLKSWAGEN. – JT) 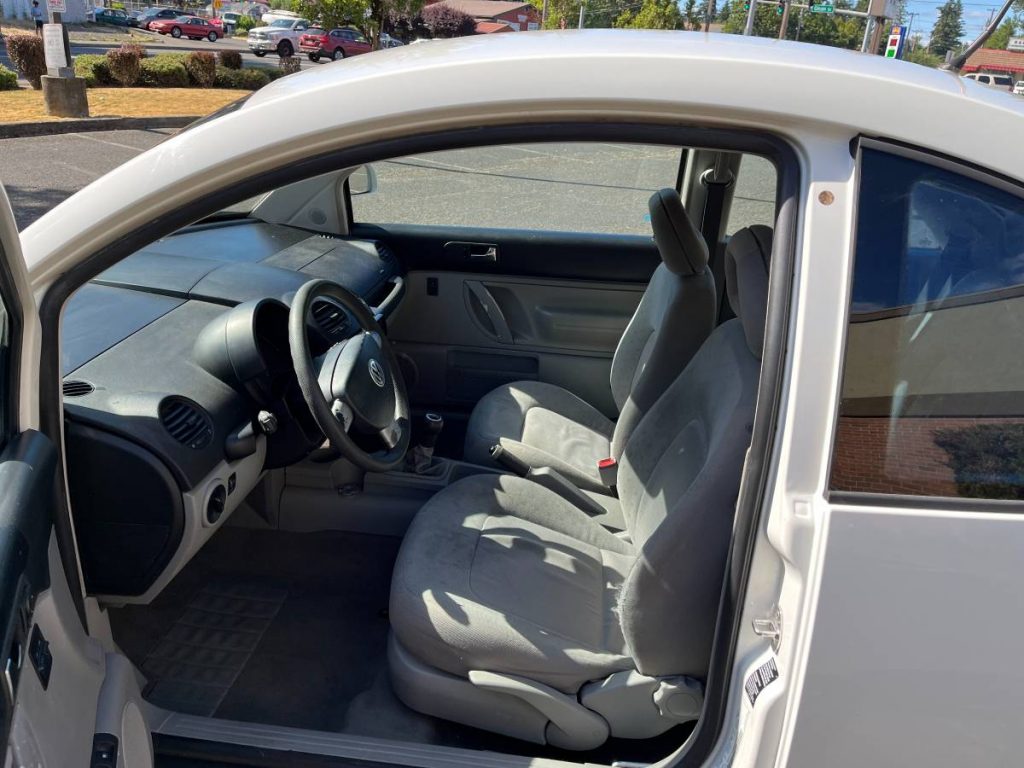 This Beetle has only 103,000 miles under its belt, practically nothing for a twenty-four year old car. It looks pretty good, too: I see one scrape in one door, but no other damage, and the interior looks clean. We don’t get much information about its mechanical condition, but it has current registration, which bodes well. A buyer would probably find a few things that need fixing (it is a late ’90s Volkswagen, after all), but it looks like a respectable little car. 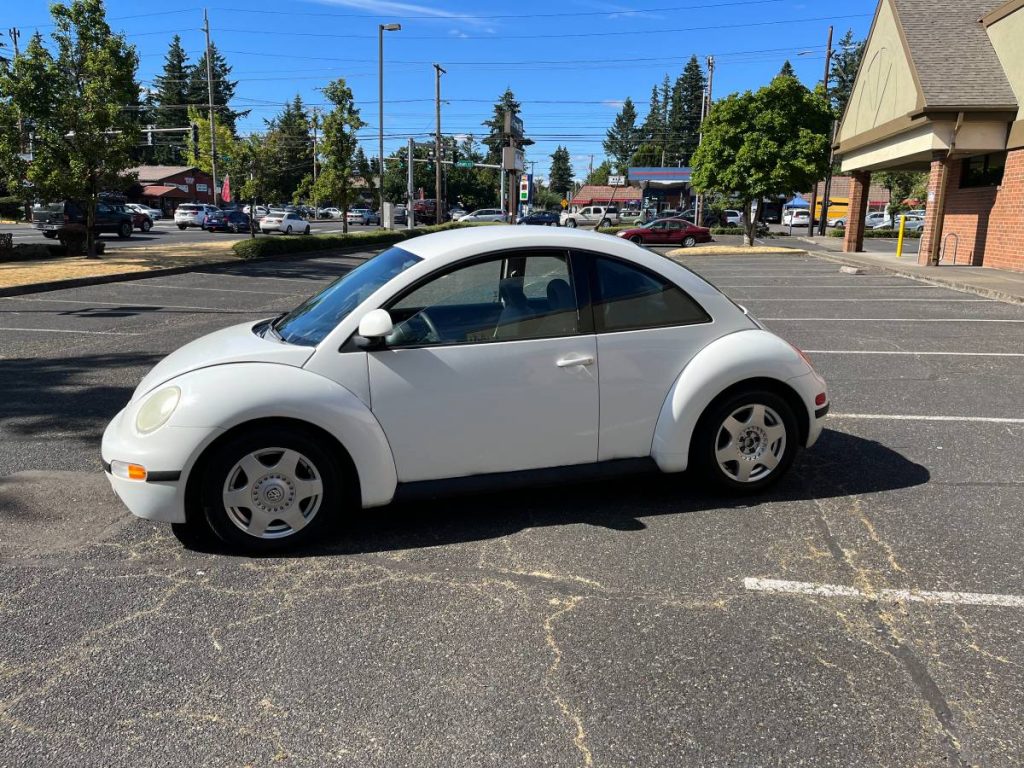 I’m personally still not sold on the New Beetle’s styling, but I’m coming around, especially for prices like this. Secondhand Golfs are still more appealing, but Beetles are easier to find. If I were ever to return to my water-cooled VW days, which I have threatened to do a few times, a Beetle like this wouldn’t be a terrible choice. At least they made it a hatchback. 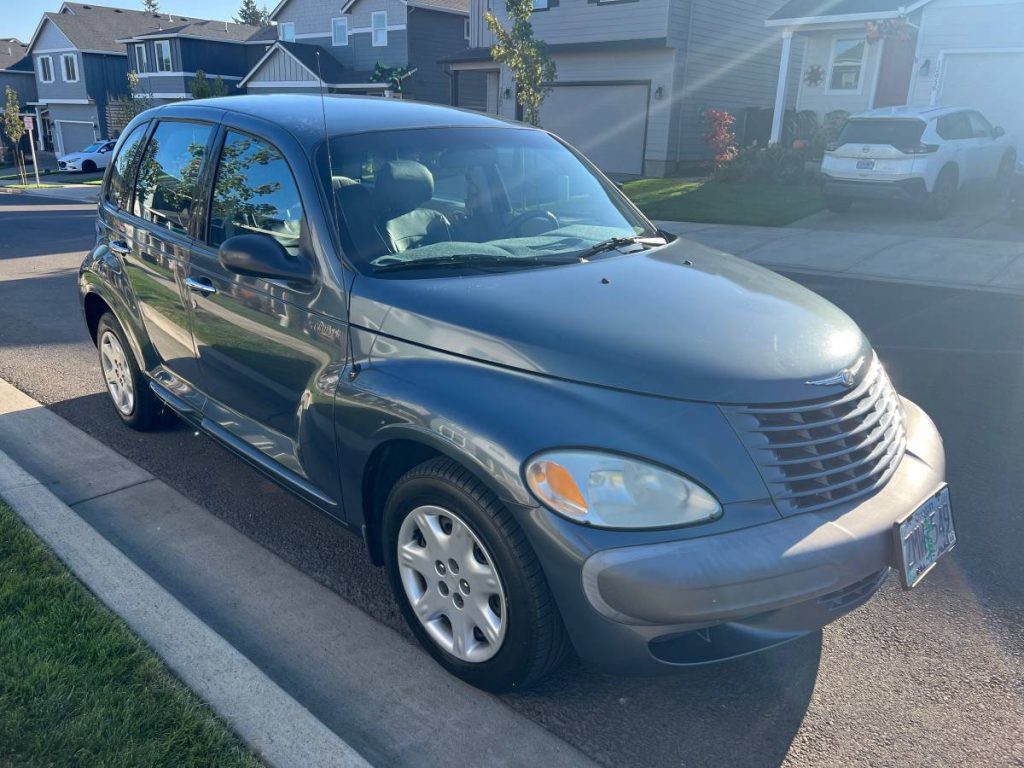 We’ve talked about the Chrysler PT Cruiser before. In fact, it was the subject of the very first Shitbox Showdown that I wrote, back in April (which feels like either last week or ten years ago). I’m a fan of the PT; despite the unorthodox styling and baffling NHTSA classification as a truck, what it really is is a small tall station wagon, and there’s nothing wrong with that. 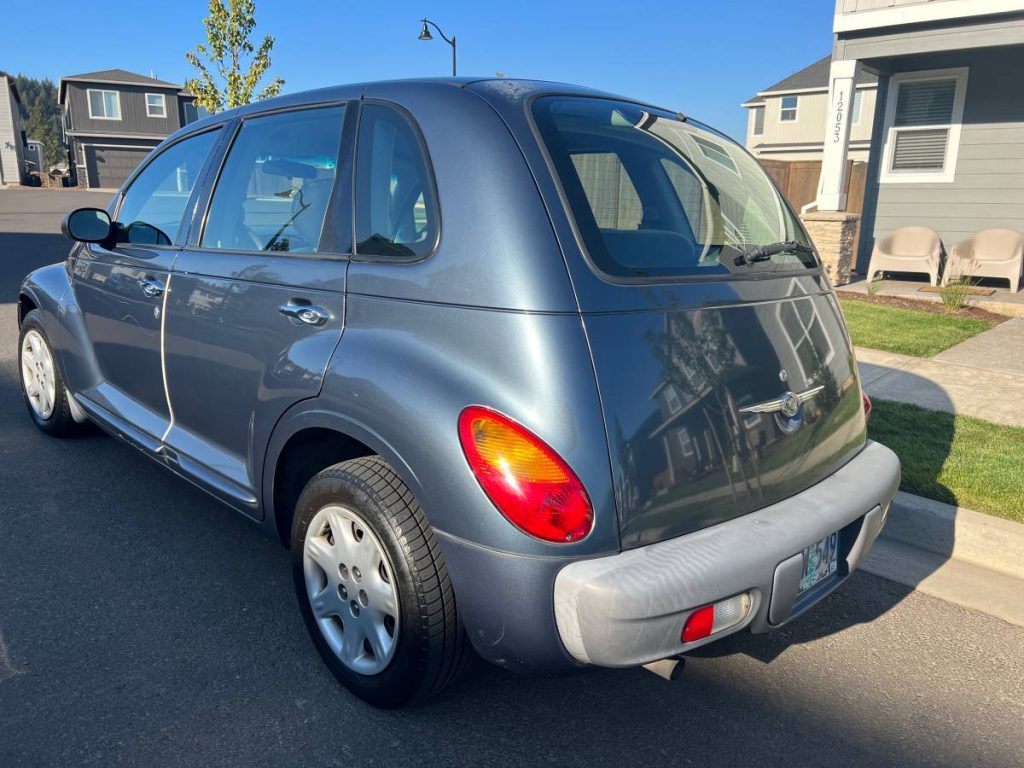 All PT Cruisers in the US were powered by a 2.4 liter four, or turbocharged variant thereof. This one lacks the turbo, and it also lacks a clutch pedal (sorry). Out of the more than one million PT Cruisers sold, I would wager that the majority were equipped with the naturally aspirated engine and the automatic. Nothing wrong with it, but small cars are more fun with manuals. But hey, you can’t have everything. 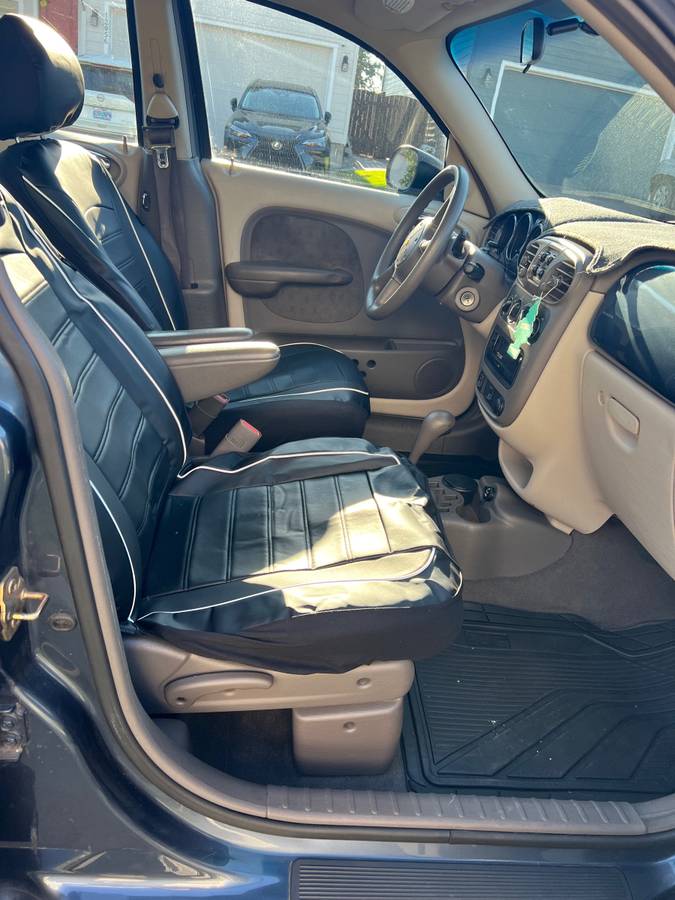 What this particular example does have to offer is an odometer still on five digits (barely). It’s an early model, with the ugly gray plastic bumpers, and they haven’t weathered the years too well. The paint looks great, however. With this few miles, I suspect, and hope, that the seat covers and dash covers and big rubber floormats are precautionary, and the seats and dash look like new underneath. I could be wrong – it could be trashed, but I doubt it. 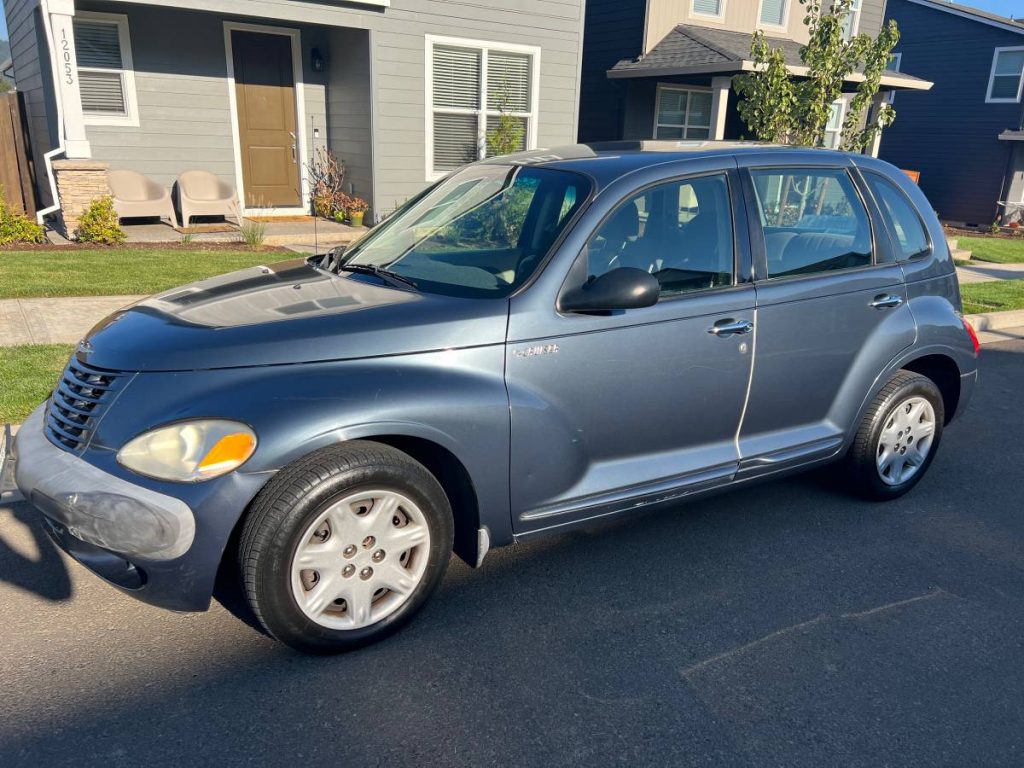 There isn’t much information to go on, again, so a careful inspection is a good idea, as well as a timing belt change if there is no record of it being done already. The only thing that worries me a little bit is that it looks like more than one wheel has a missing lug nut. I’d like to know what the story is there. With that caveat, this looks like a decent deal on a reasonably good car.

I know a lot of you will take one look at these and say, “Ew, neither.” But set aside the hokey nostalgic styling, and what you’ve got here are two pretty decent little cars. Sure, you’d have to be seen in them, but for cars this clean and low-mileage, I think I’d be willing to make the sacrifice. What say you, Autopians? Which cheesy retro-mobile do you choose?