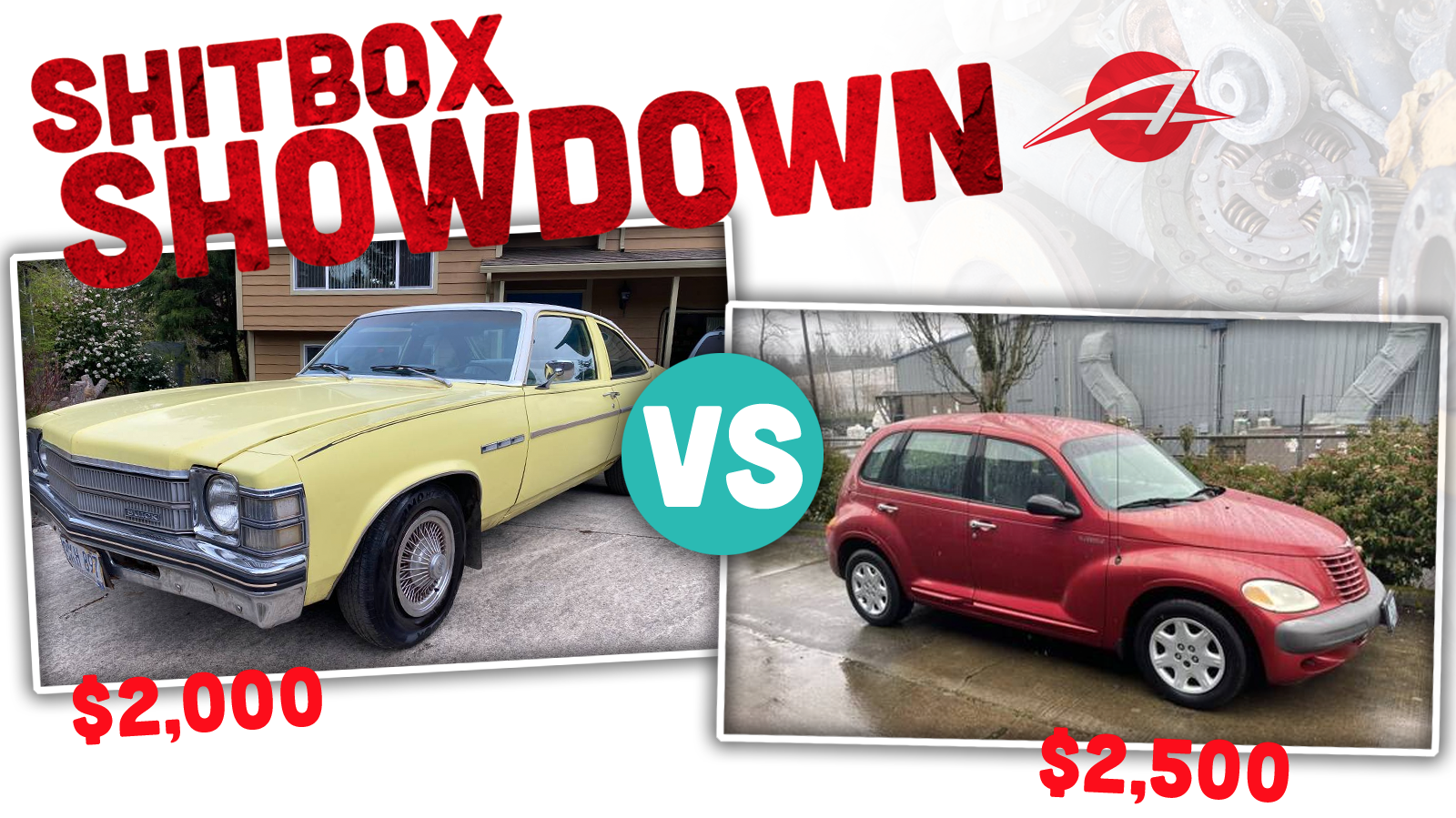 For today’s Shitbox Showdown we have a choice to make make between two American cars that have only two things in common: both come from near-luxury brands, and both are hatchbacks. Aside from that, they couldn’t be more different.

Hey all! Mark here. I’m new. But the site is still new, so aren’t we all? I mean, they haven’t even taken the plastic off the screen yet. Makes it hard to read, to be honest.

First, I want to thank young Thomas for getting the ball rolling while I worked things out with Jason and David. I ended up having to bribe them with a “vintage” box of Teddy Grahams Bear-Wiches that I found behind the seat of my truck to let me do this. (Seriously, guys; don’t eat those.)

Between Thomas’s excellent choices yesterday, it appears the Scirocco is the clear winner, no matter how many times David Tracy banged the TC By Maserati vote:

The Scirocco would be my choice too; the TC is just too much like a LeBaron, and I wouldn’t want a LeBaron unless it came with its own Veronica Mars.

I chose this car for personal reasons. It makes me think of my grandfather, who was a Buick Skylark man. (Not a Buick man, mind you; a Buick Skylark man.) He had a brown ’76 similar to this that I still have fond memories of. I also briefly owned a ’78 Chevy Nova coupe that was just about the same car. This one looks pretty sharp in pale yellow with a white vinyl top, and its two-door fastback body holds a secret: It’s a liftback.

Isn’t that awesome? More cars should open up wide in the back like this. In fact, I’ll go so far as to say that every modern stubby-trunk sedan or coupe should be a liftback. Down with mail-slot trunk openings! Give us room to load stuff! 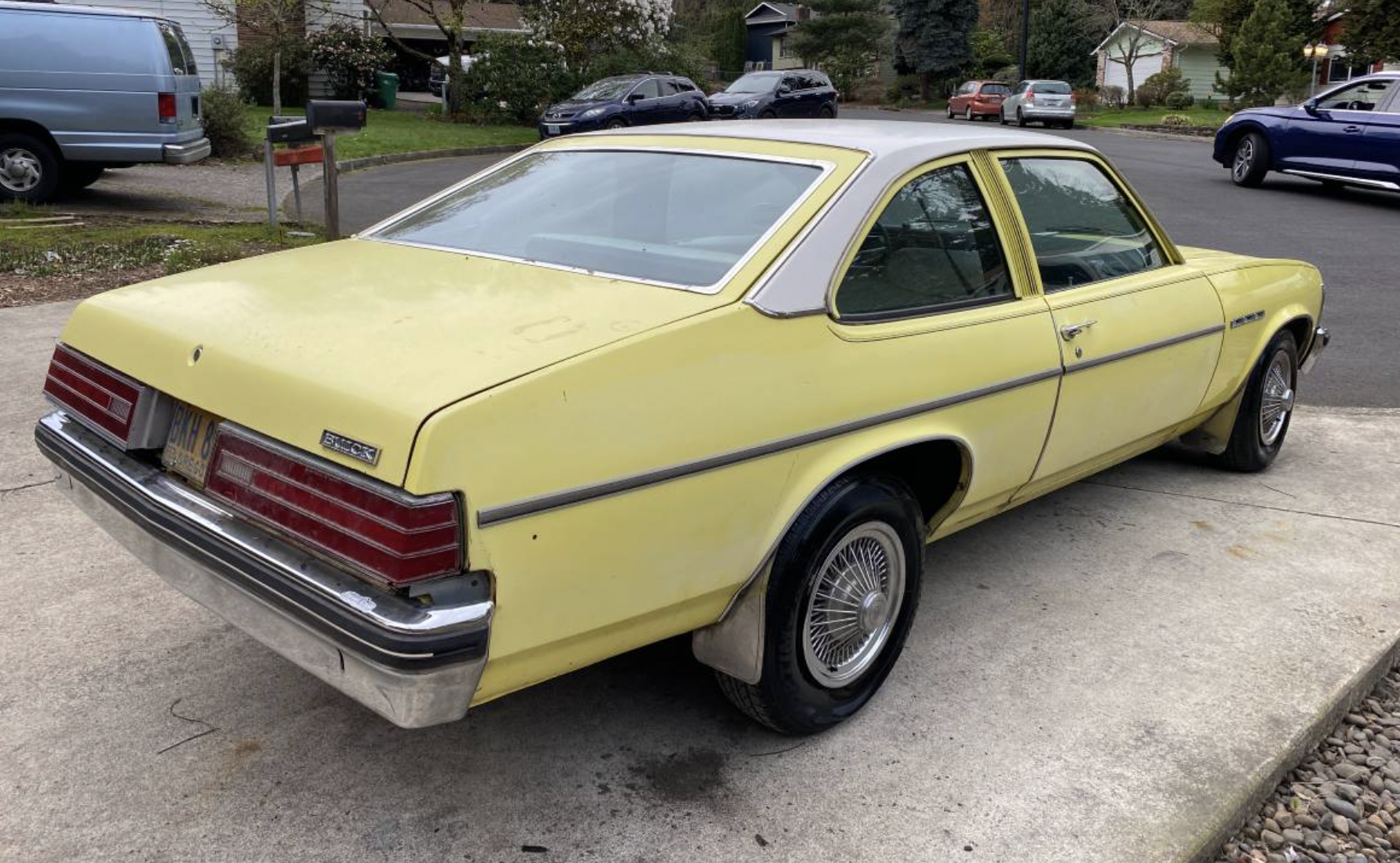 There is the matter of the transmission, mentioned in the ad, but seriously, it’s a Turbo 350. You can probably fix the thing with a hammer and some strong language. Worst case scenario, you end up replacing it, but they’re approximately as rare as black leather jackets at a Judas Priest concert. 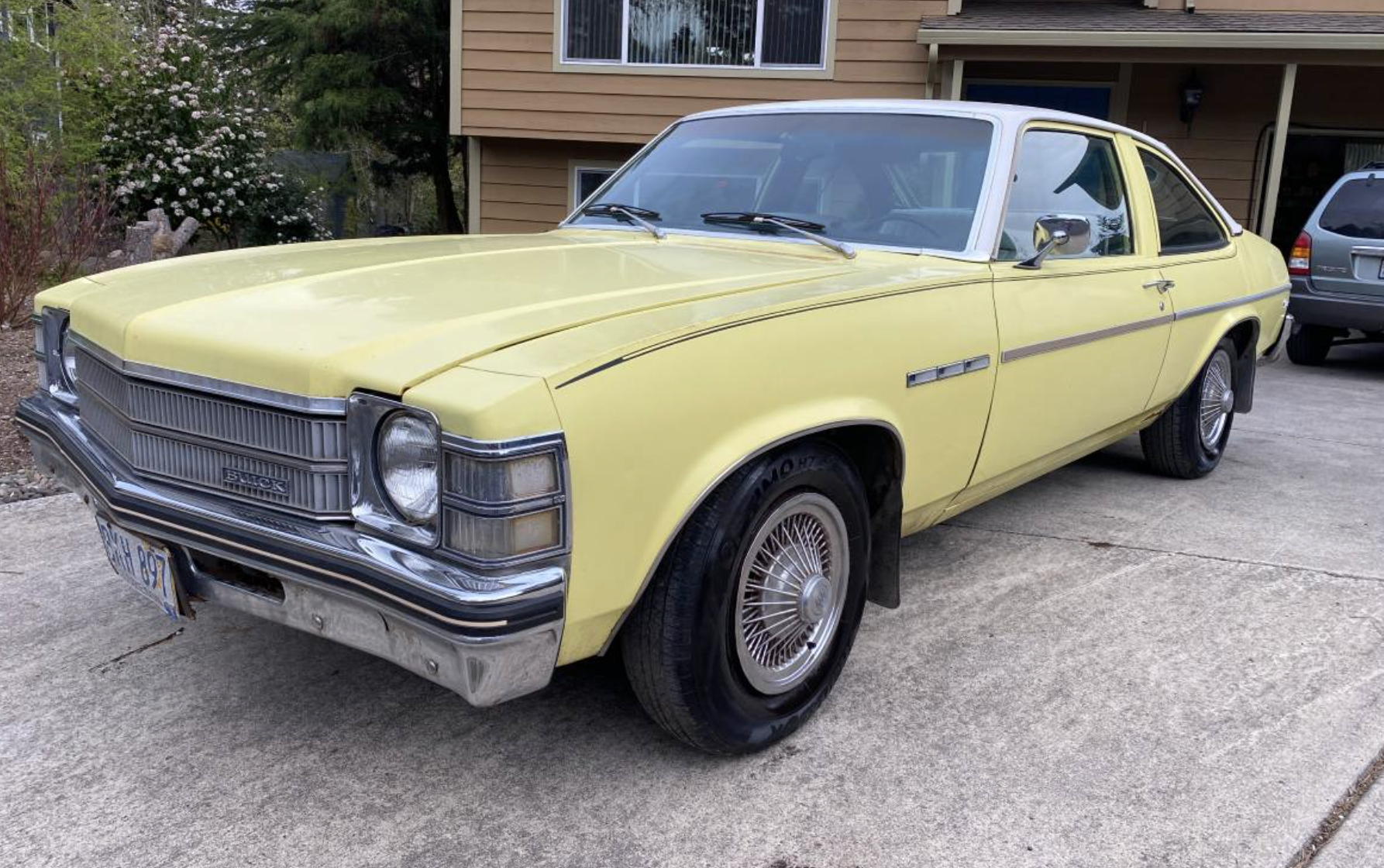 Just make sure you get one with the Buick/Olds/Pontiac bellhousing bolt pattern, because unliike the later years of this generation of X-body, this one does not appear to be packing a Chevy engine. Judging by the location of the oil filler neck, that’s an Oldsmobile V8, which in this car would have displaced 260 cubic inches and put out  – wait for it – 110 horsepower. (How the hell did they manage to break the transmission with… oh, never mind.) 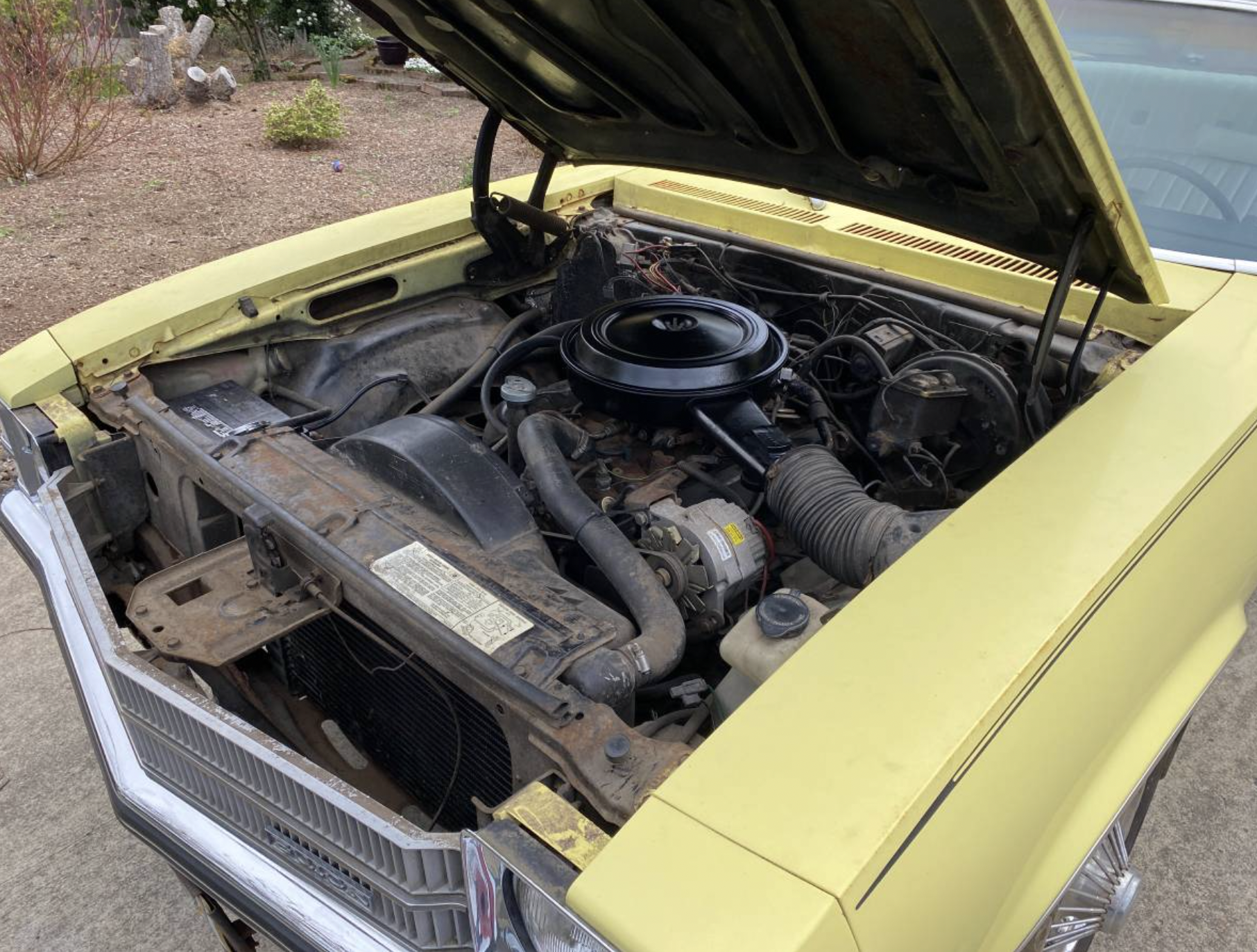 But none of that matters as soon as you open the door. Just look at this interior. 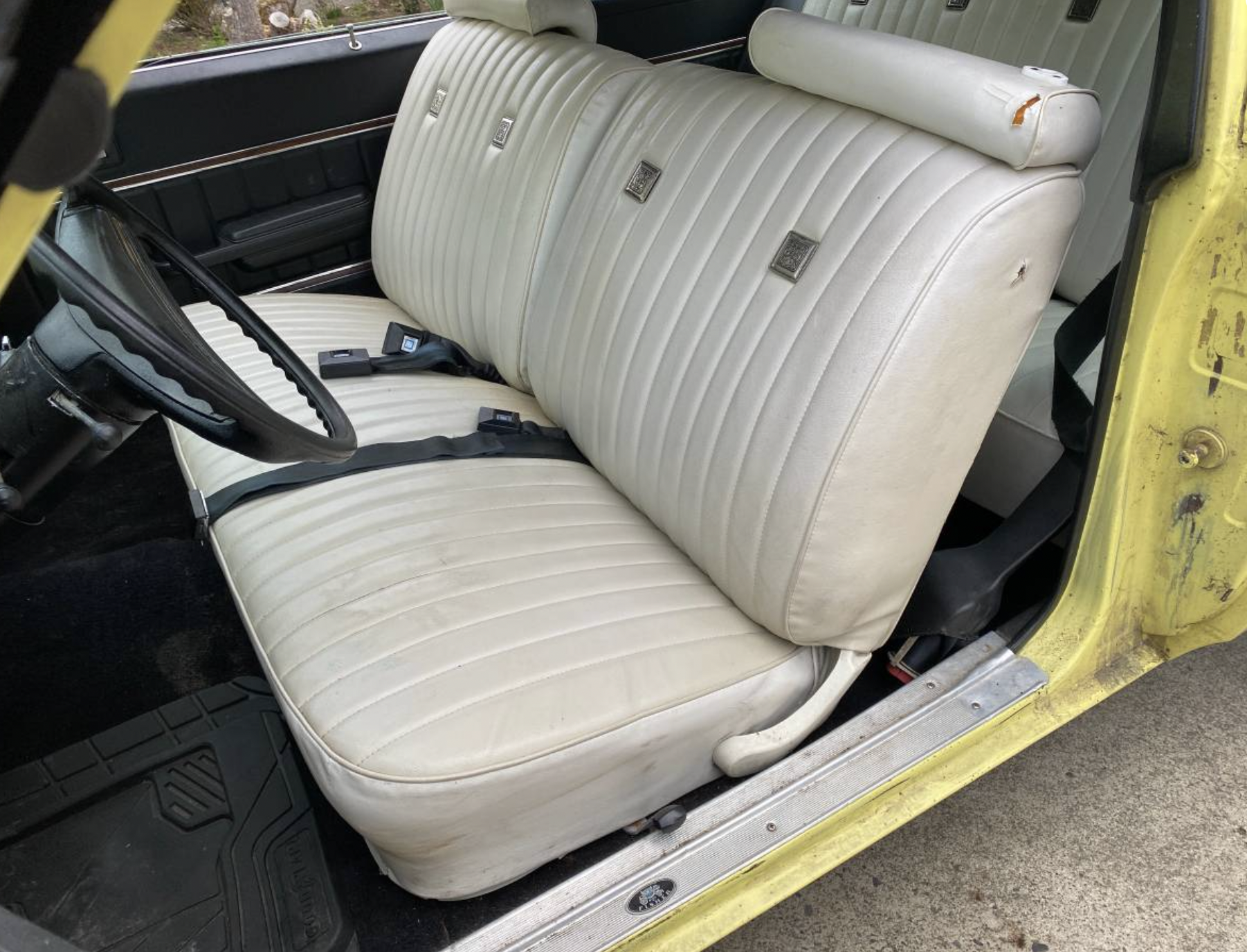 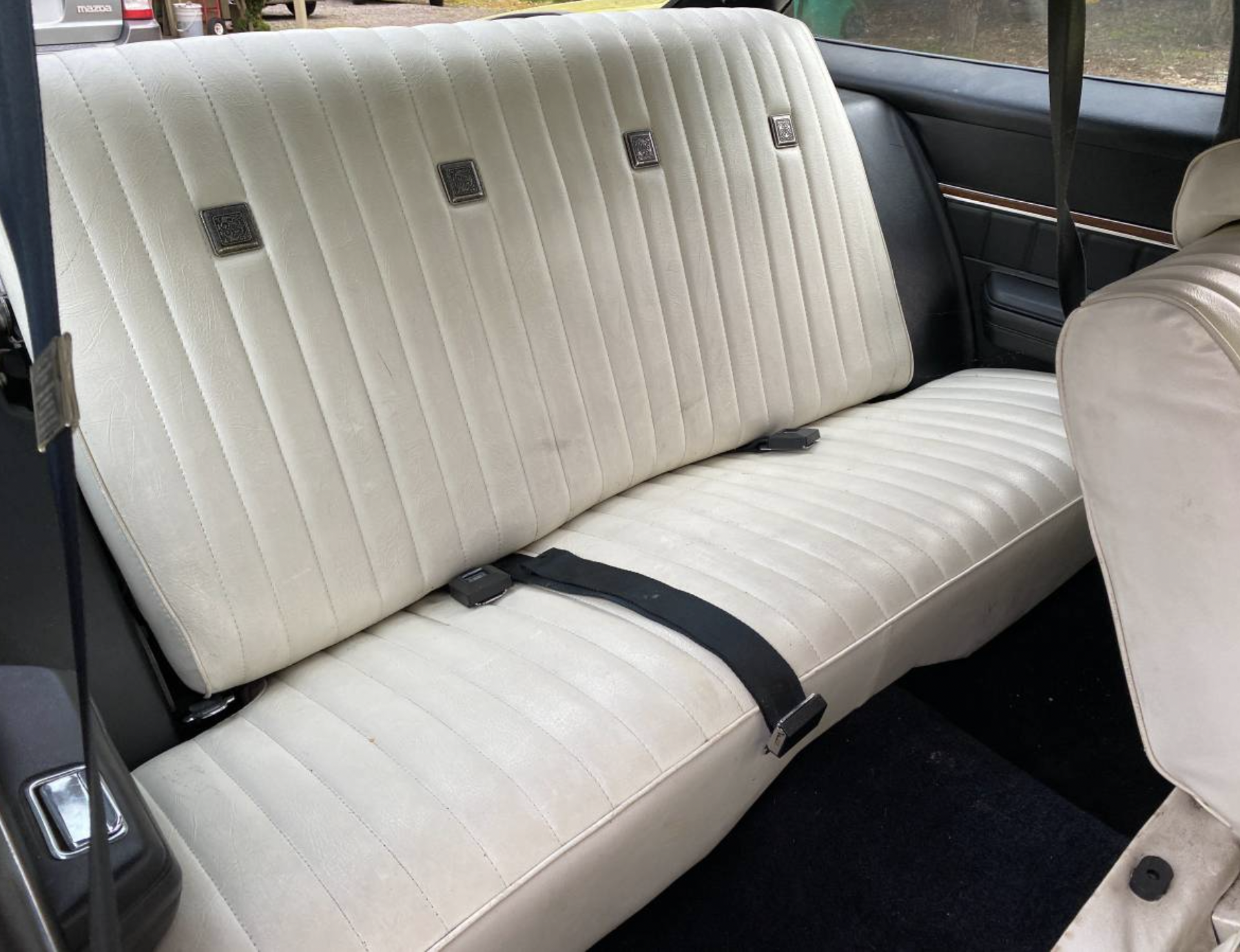 Yep. Those are white vinyl bench seats. And they look as comfy and inviting as any conversation pit ever built. I’m going to be honest; I kinda love this car. But let’s take a look at its competition: 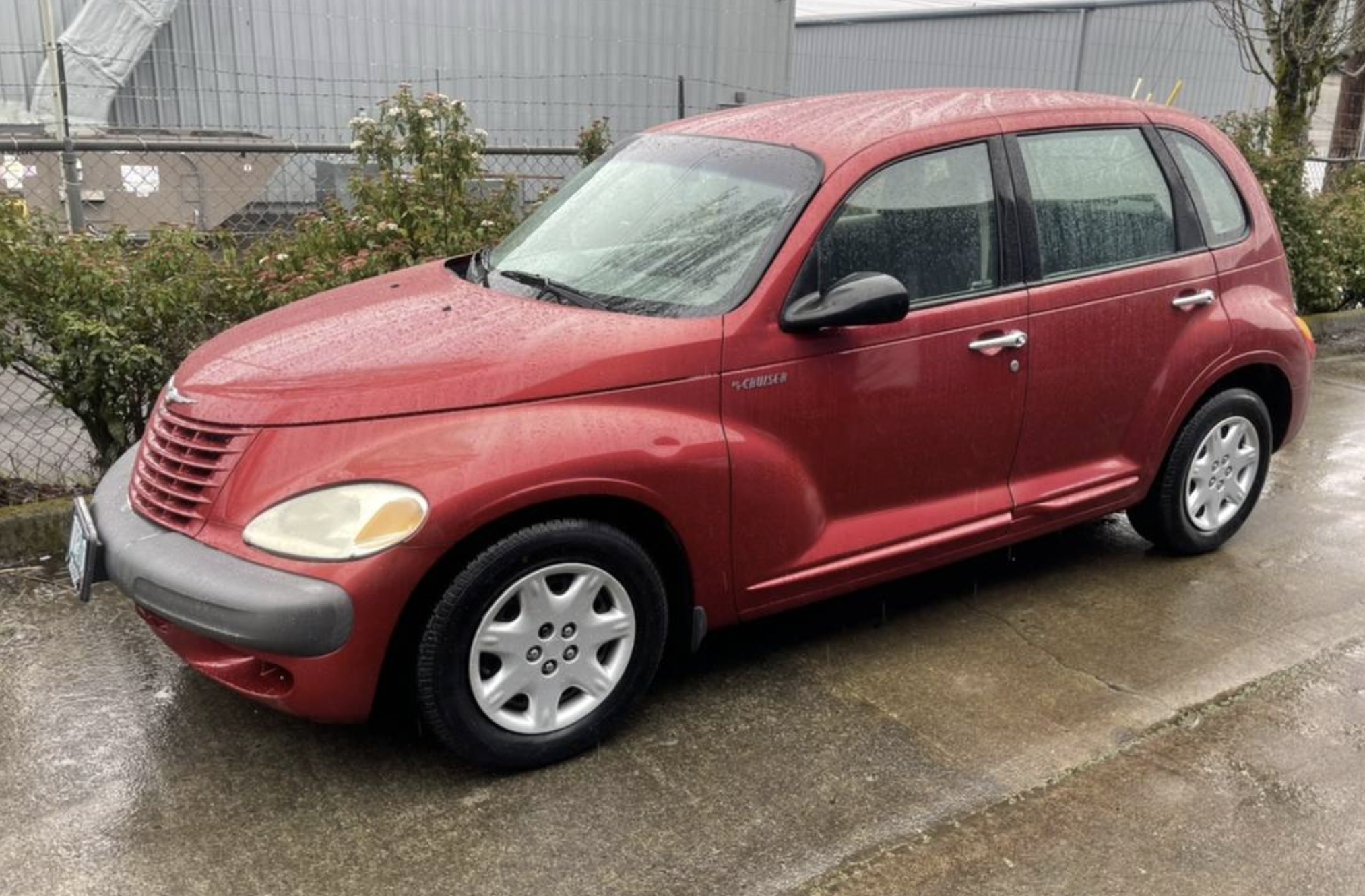 It’s hard to imagine these days, when there are a dozen of them in every buy-here-pay-here lot, but when the PT Cruiser was introduced, there was a waiting list for it. The first one I ever saw in person was in early 2001 on a dealer lot; it had a $4000 markup on the sticker, and it was already sold. Madness. 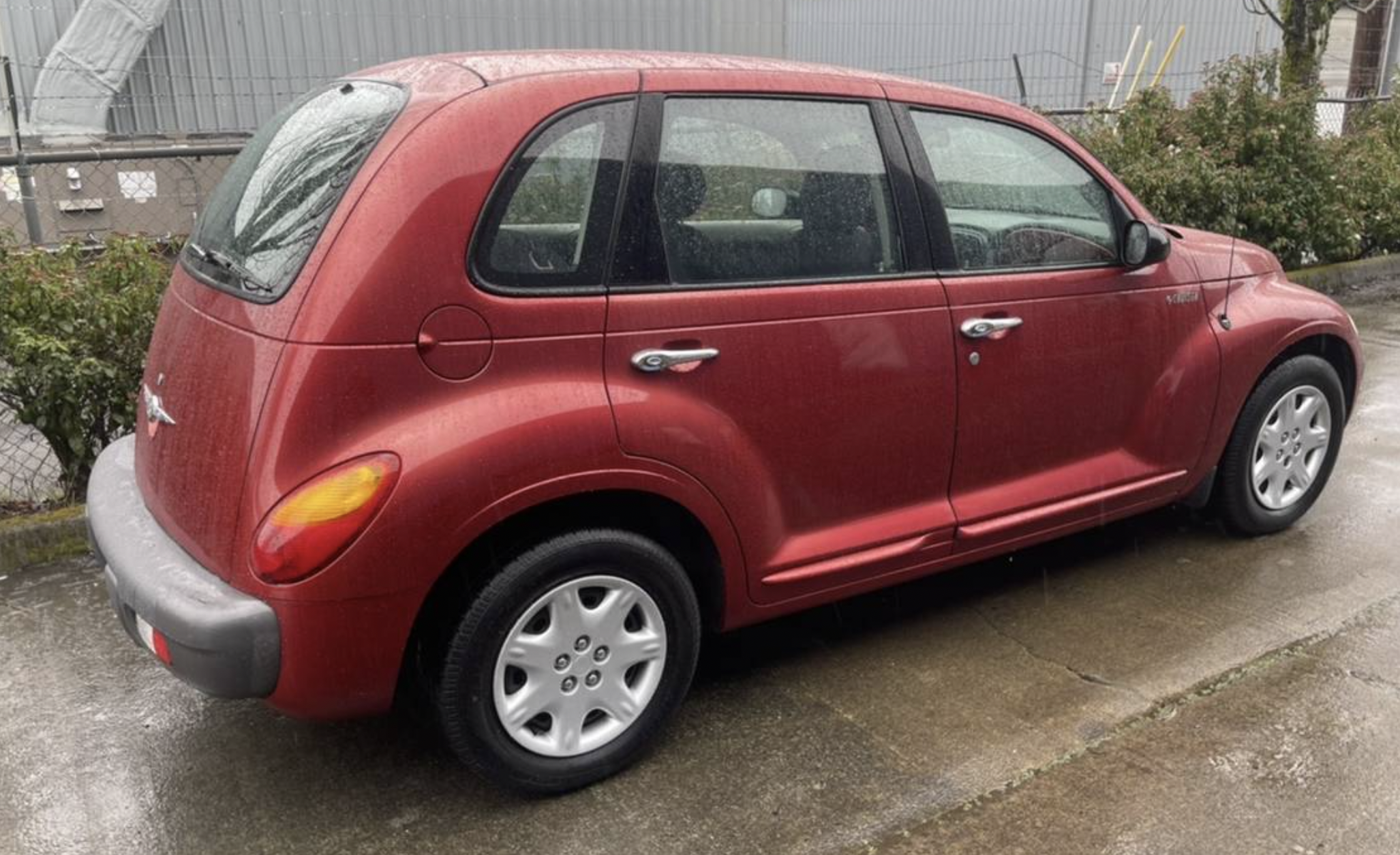 But I’m not here to pick on the PT Cruiser; plenty of people have done that already. I actually quite like the idea of it: a small, tall wagon that gets respectable mileage and is more or less reliable. You can haul a surprising amount of stuff in it. It’s stubby, so it fits into tight parking spaces. And these days, it has zero appeal to thieves, so you can park it in a sketchy neighborhood and be reasonably sure it will be there when you get back. What’s not to like? 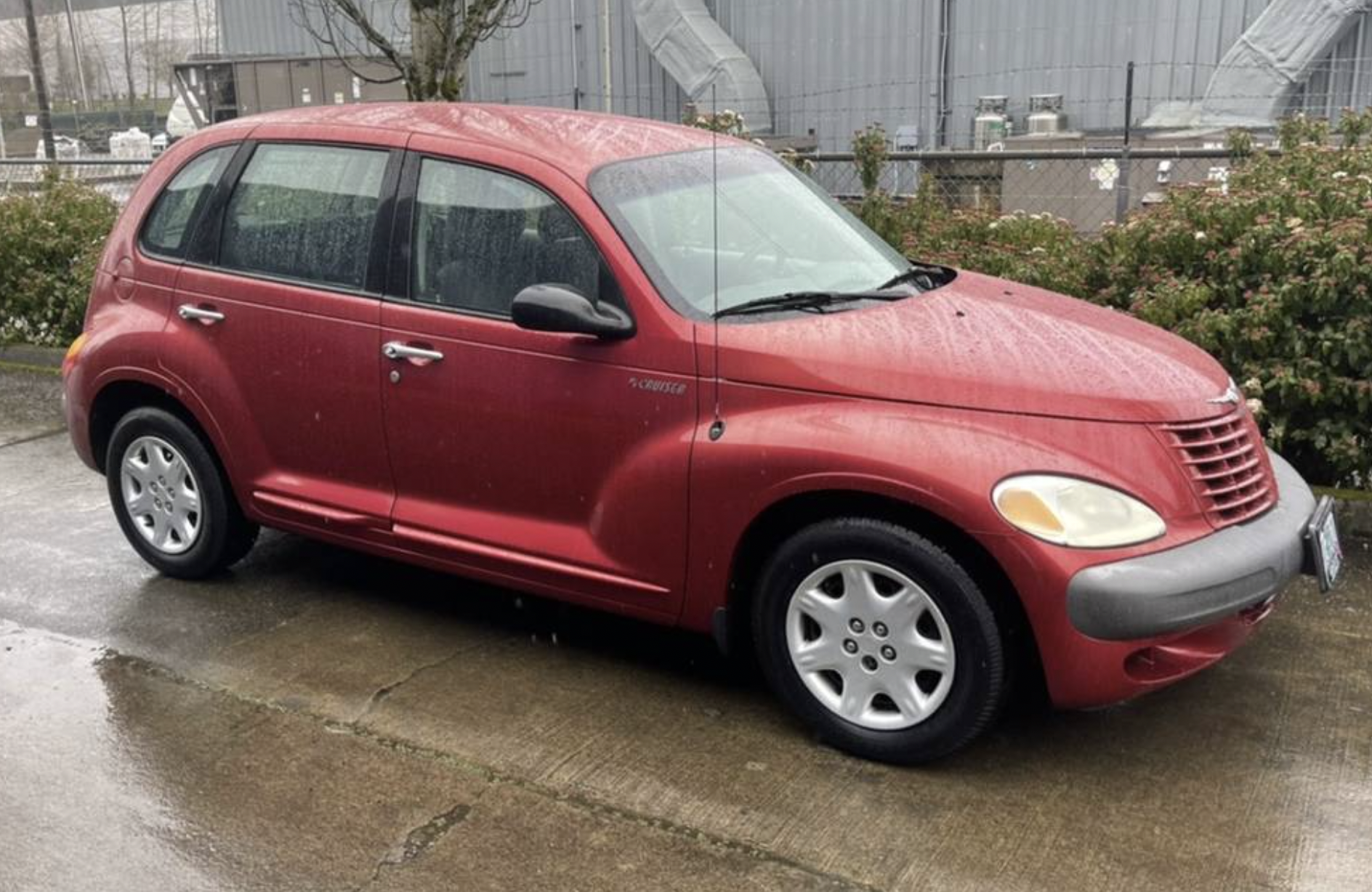 I chose this particular PT Cruiser for one reason: It’s a manual. And if you look closely, someone appears to have replaced the plain round ball shift knob with a chrome skull: 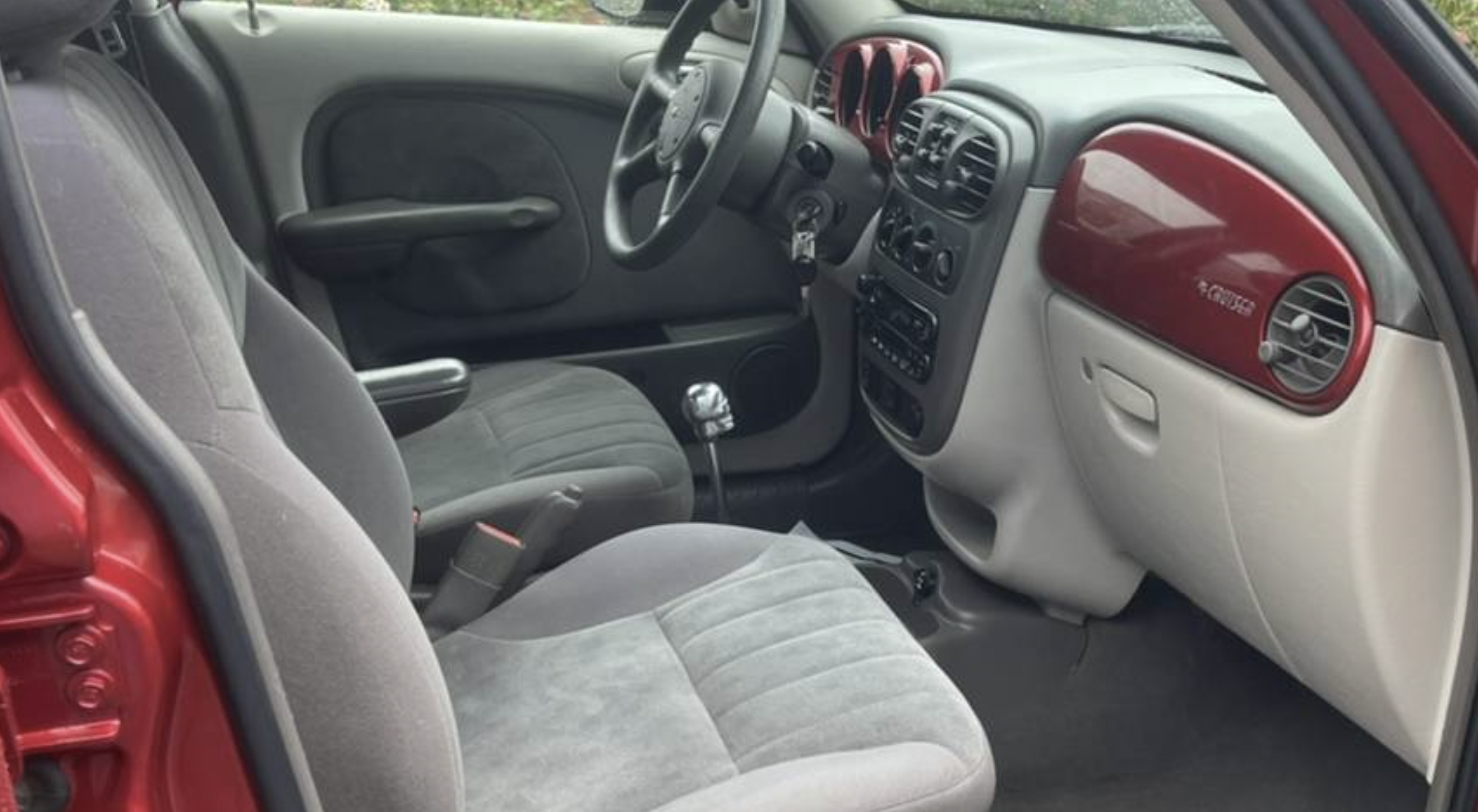 This is a nice touch, because otherwise, apart from those two body-colored inserts on the dash, the rest of the interior is that soul-sucking industrial gray that US automakers seemed so fond of 20 years ago. But at least it looks to be in decent shape. That five-speed manual backs up the standard-issue 140 horsepower four, which won’t set the world on fire, but it’ll probably handily outrun the Buick. 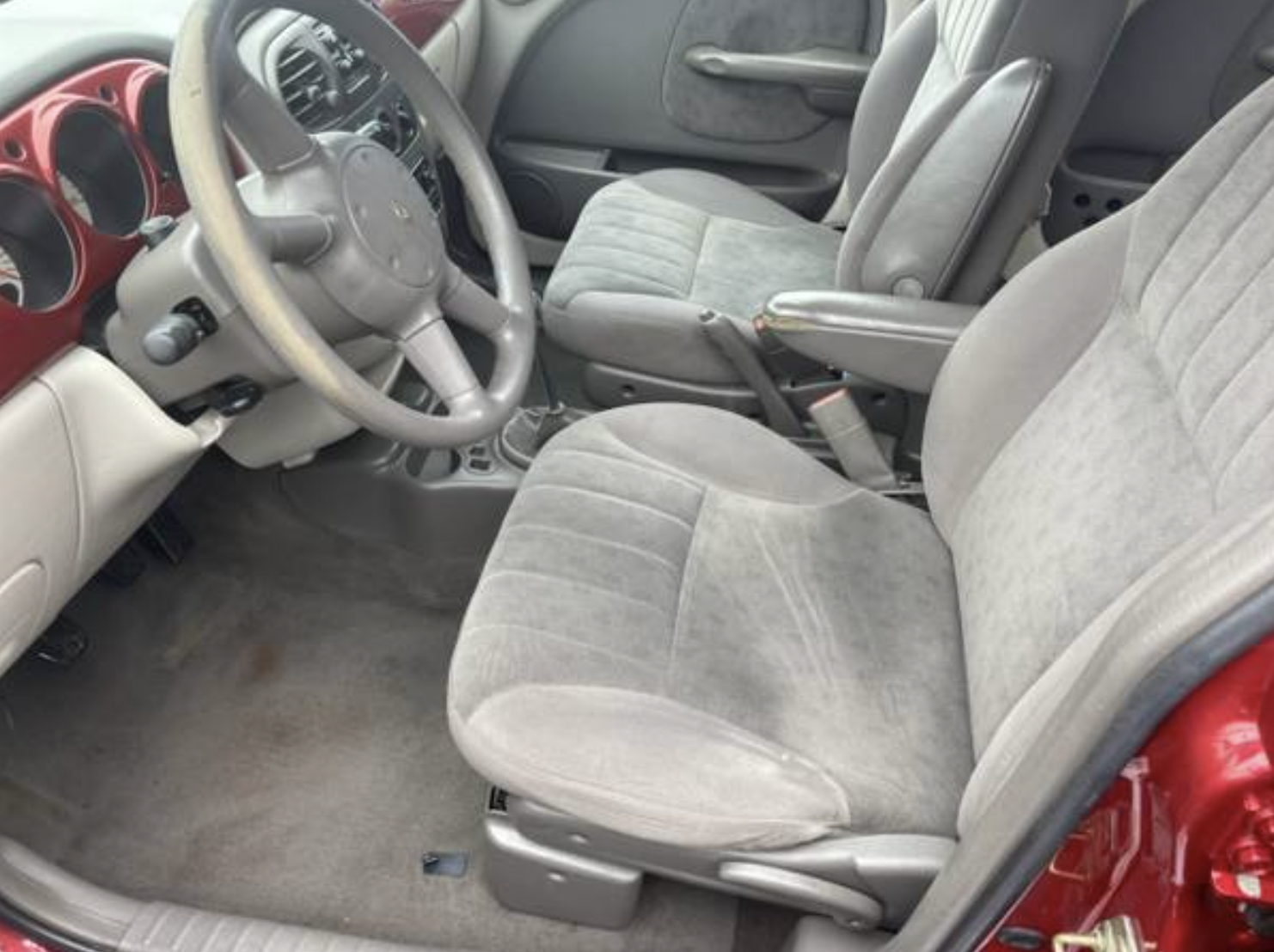 So. Those are your choices. Generally-hated Cruiser that’s really not as bad as its reputation, or a bright cheery yellow cruiser from the darkest days of the U.S. auto industry. The winner will join yesterday’s Scirocco — along with Wednesday’s and Thursday’s choices — on Friday to battle it out for Shitbox Of The Week, the highest of Autopian automotive honors.

Read All My Posts »
PrevPreviousCold Start: The Spaceship You Use To Get Groceries
NextThe New 2023 Honda HR-V Looks Like You Really Pissed It Off This TimeNext