Good morning Autopians! It’s Friday, which means we blow the lid off the price cap and look at something nice for a change. I’ve got a pair of imported JDM sweet treats for you today, but first let’s find out how our high-milers ended up:

Yep. I agree wholeheartedly. I already have a better and lower-mileage pickup than that F-150, so I’d take the Volvo and try for half a million on the odometer.

Today we’re going further afield than usual, only not really. Although both cars today are Japanese domestic market cars, both are already here in the good ol’ US of A, with all the paperwork completed. I was inspired to look at JDM cars after listening to this week’s excellent Autopian podcast, with guests Myron Vernis and Mark Brinker sharing their love of cars from the Land of the Rising Sun. I confess I don’t know a whole lot about Japanese cars; I didn’t grow up around them, and I’ve never been much of a video game player, so I wasn’t exposed to them virtually either. But I do love a good tiny hot hatch, so I’ve selected a pair of them for us to compare. Here they are. 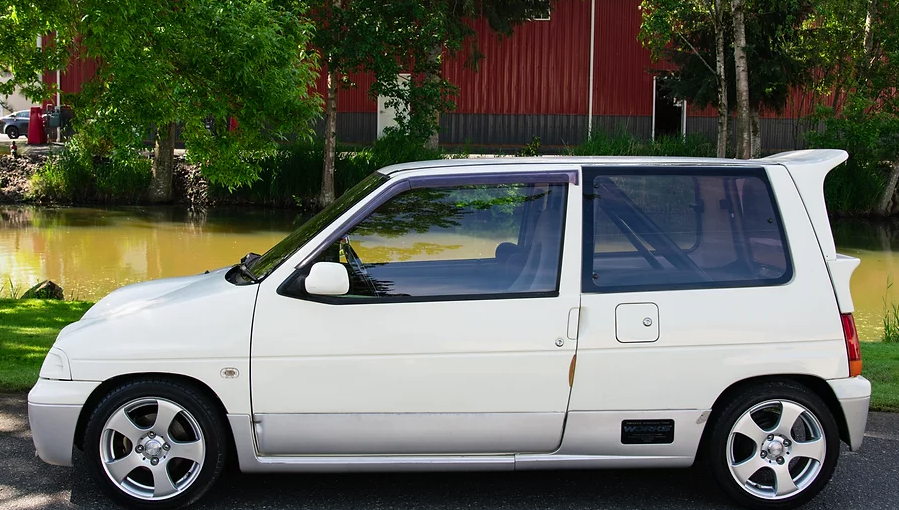 American gearheads are fascinated by Japanese “kei” cars – a special tax category of tiny cars in Japan that have to fit within certain size, engine displacement, and horsepower limits. Sadly, truly small cars have never really worked out in the US, so the “subcompacts” that Japan sends us are two or three sizes up from the smallest cars they keep for themselves. This Suzuki Alto is a full foot shorter, and six inches narrower, than the tiny Suzuki Cultus that was sold here as the Chevy Sprint. 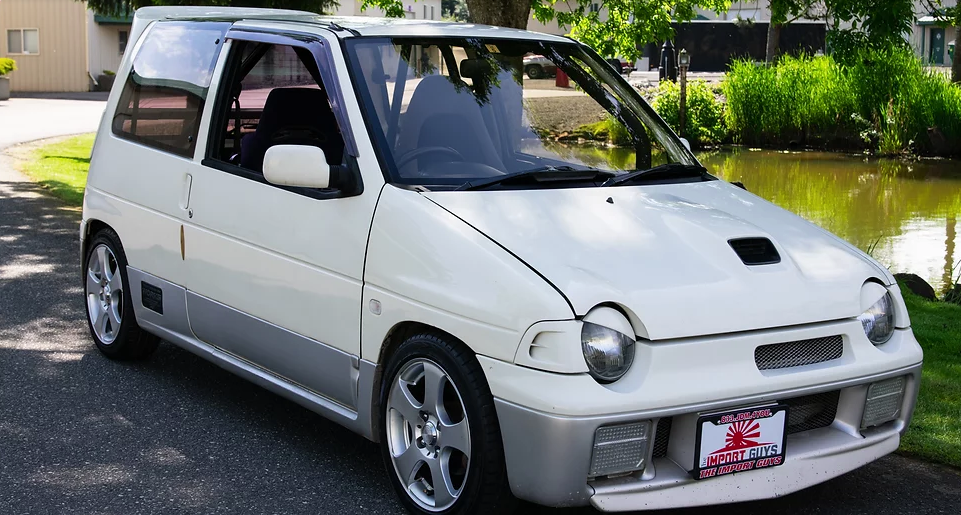 But look how cute it is! I even kinda like the “angry eye” headlight eyelids on this one. Who’s an adorable little badass? You are! Yes, you are! 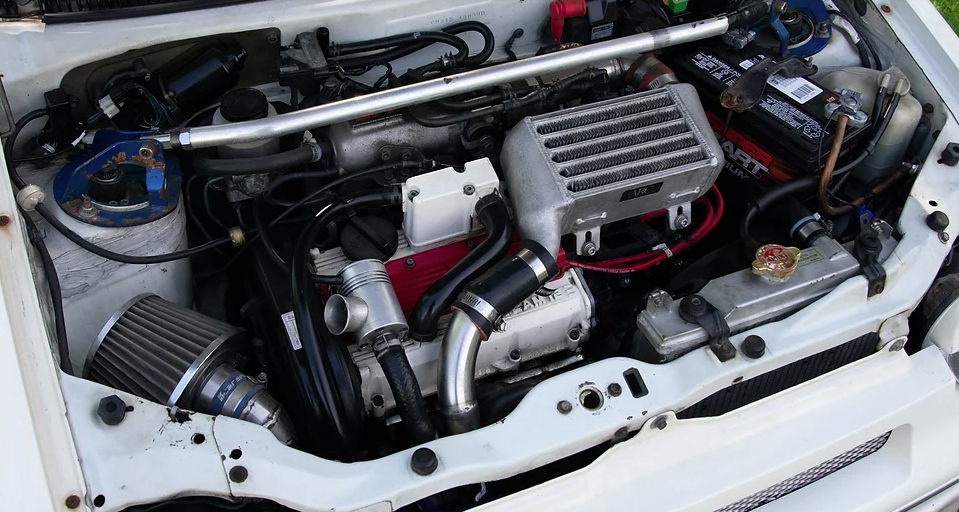 The Alto Works has the power to back up its cute-but-tough looks, with a 657 cc three-cylinder, sporting twin cams, four valves per cylinder, and a turbocharger. Officially, this little wonder produces 64 horsepower, the legal limit for kei-class cars, but rumor has it that it has more. It drives the front wheels through a five-speed manual gearbox; the Alto Works was available with all-wheel-drive, but this one is FWD only. 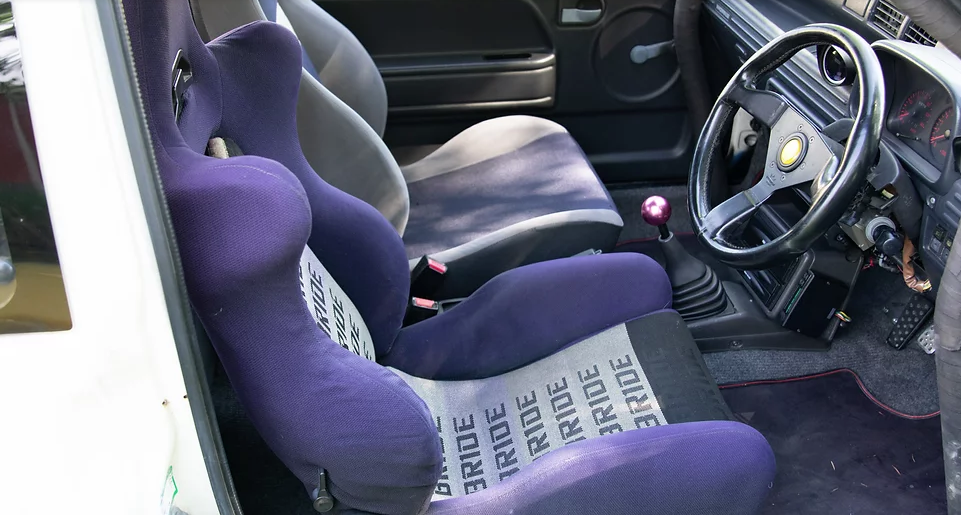 This car has a few other add-on goodies, including a full roll cage and a racing seat. Someone was having some fun with this little guy back in Japan, I bet. The seller doesn’t list the odometer reading; it just says “total mileage unknown.” But does it matter? I mean, how are you going to cross-shop it? 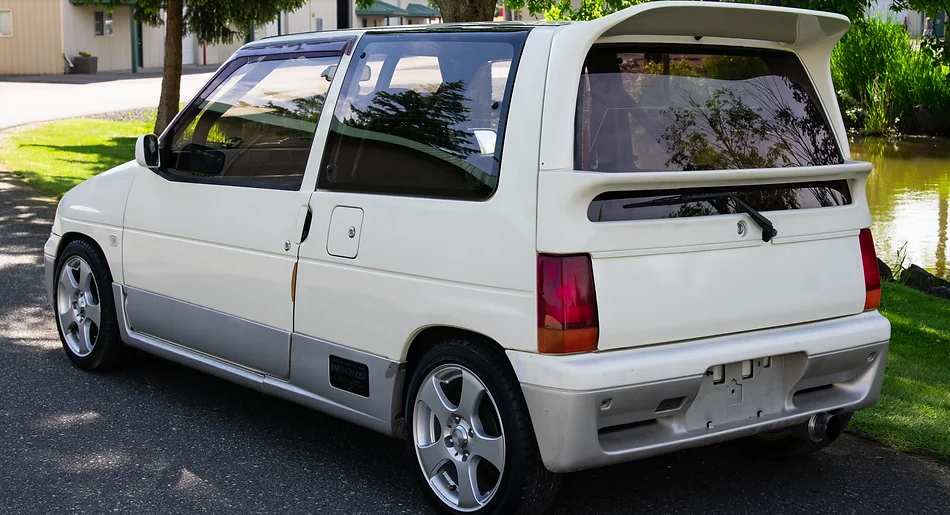 And look! A bi-level rear spoiler. Merkur XR4Ti, eat your heart out. I don’t think I’d want to daily-drive something this small in the US, but I really really want to play with it. 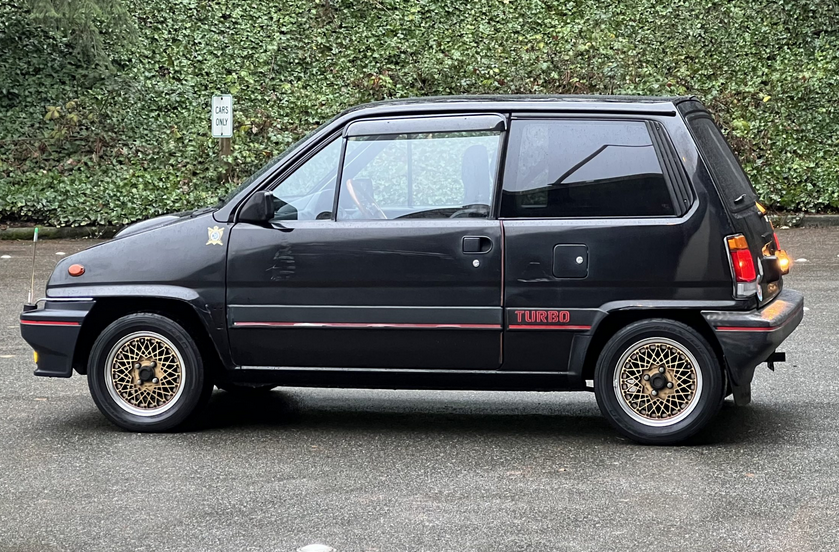 Speaking of playing with things, I have been familiar with the Honda City Turbo since I was a kid. I built a Tamiya model kit of it when I was ten years old or so, complete with the folding Motocompo scooter in the back. Sadly, this City Turbo does not include a Motocompo, but it’s still a really cool little car. 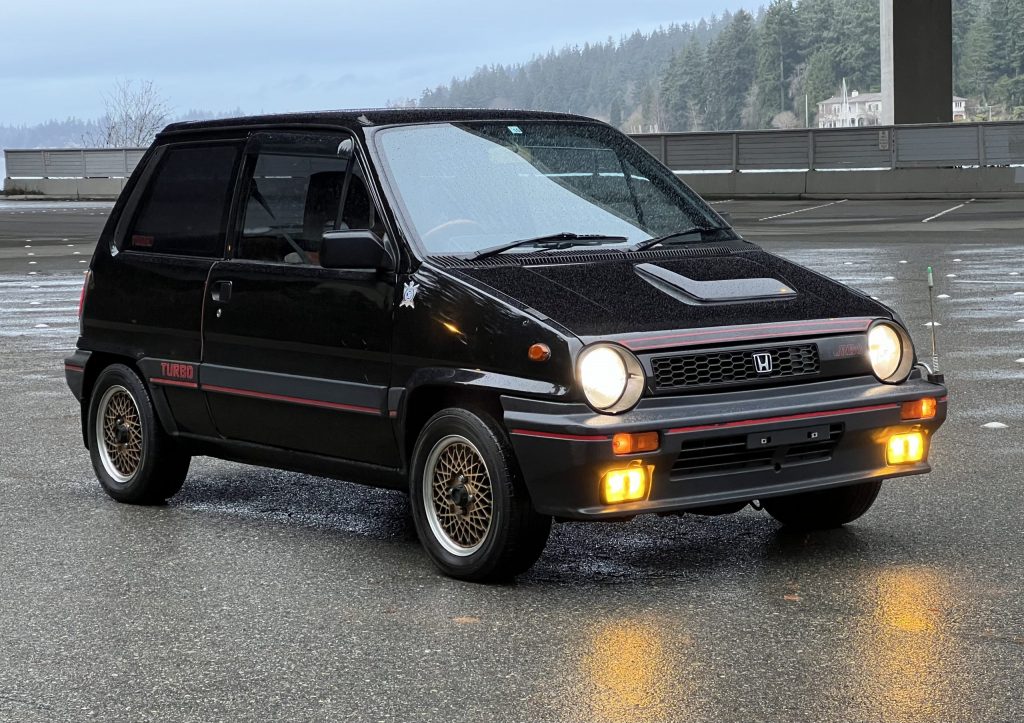 The Honda City is not a kei car; it’s too big and has an engine displacement nearly double what the regulations allow. It’s a 1.2 liter turbocharged four, sending a whopping 99 horsepower to the front wheels through a five-speed manual. The City weighs about 1,500 pounds; it has more than enough power for that weight. (In fact, some would say it could get by with half as much.) 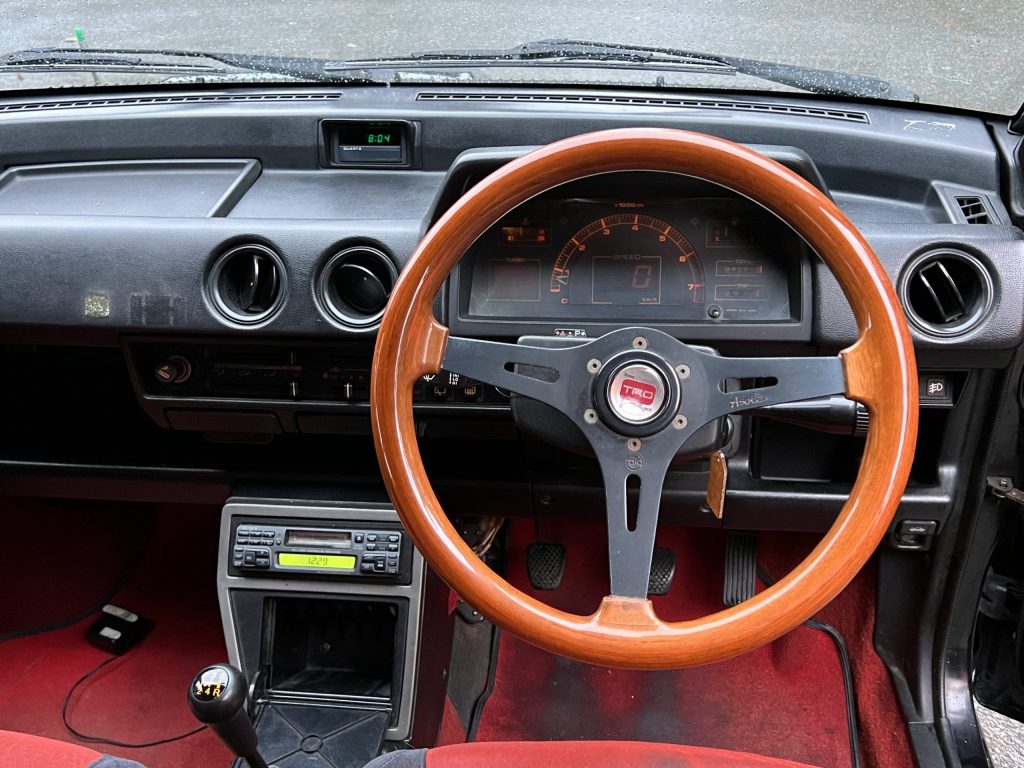 This City has cool aftermarket wheels and a nice Nardi wooden steering wheel, though the horn button appears to have an identity crisis. I’m sure a Honda logo button could be found to replace that blasphemous Toyota Racing Development one. 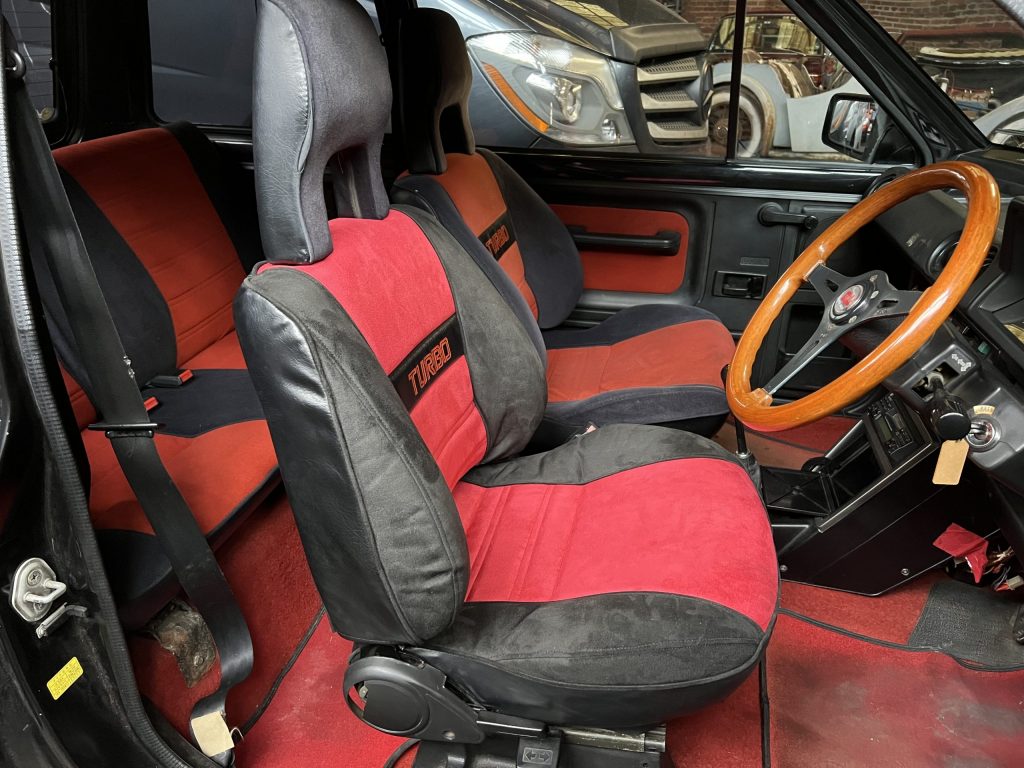 This City isn’t perfect; it has a couple of dings and scrapes, and the interior is a little grubby. The driver’s seat has been re-covered, but unfortunately the new red upholstery doesn’t quite match, and it sticks out like a sore thumb. 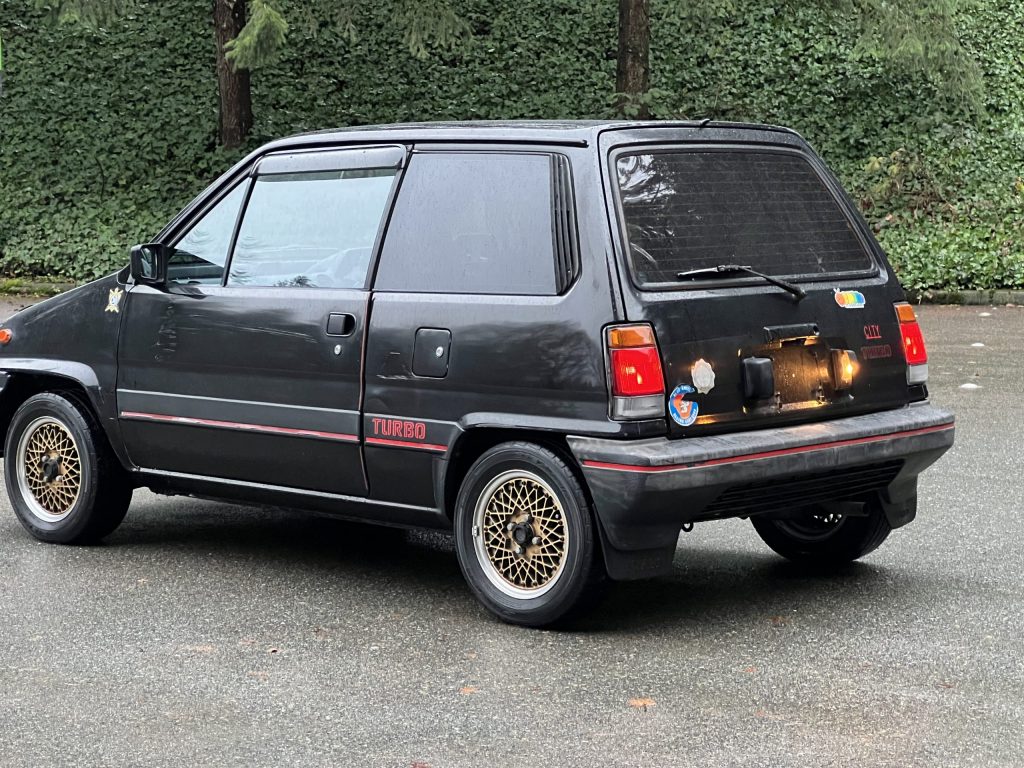 Still, the seller says it runs and drives well, and this one is just about big enough to actually use in traffic – about Ford Festiva-sized. It punches above its weight in the cool department, though.

Obviously, for most of us (including me), thirteen grand for a tiny car that’s just a glorified toy is kind of a pipe dream. But since they’re close in price, let’s just imagine you have the cash to blow on one of these. Which one will it be?