Good morning, and happy Friday to you all! On today’s edition, we’re leaving the wheels behind and taking to the high seas (or at least the lakes and rivers) with a pair of cheap old runabout motorboats. Or, as they’re often called, “holes in the water that you pour money into.” Before we dive into those, let’s see which Caddy you’d rather set sail in:

Yep, that would be my choice too. Looking at that ’91 makes me miss my ’89 Coupe DeVille. That was just too damn big, but this Eldorado looks just right. And I prefer that earlier square-jawed style. It’s going to make somebody a nice cheap ride, that one.

So… Boats. I’ll come right out and say it, I’m a little out of my depth [Editor’s Note: I GET IT! – JT] here. Most of these columns I can sail through without a whole lot of research, but this time I can’t just float along. [Editor’s Note: Oh there’s more – JT]  I need to navigate some unknown waters today, and I hope those who know better what they’re talking about will show me a little patience as I learn the ropes. [Editor’s Note: Oh god – JT] With that said, let’s get our feet wet – possibly literally.

Both of these boats are made by Bayliner, who, as I understand it, had a reputation for some pretty cheap shoddy materials and workmanship early on. But like any “cheap” product, they have their devoted followers, willing to put in the work to turn them into something respectable. But because of the bad reputation, they often sell cheap, even the nice ones. Basically, they’re the shitboxes of the boat world, which makes them perfect for us. 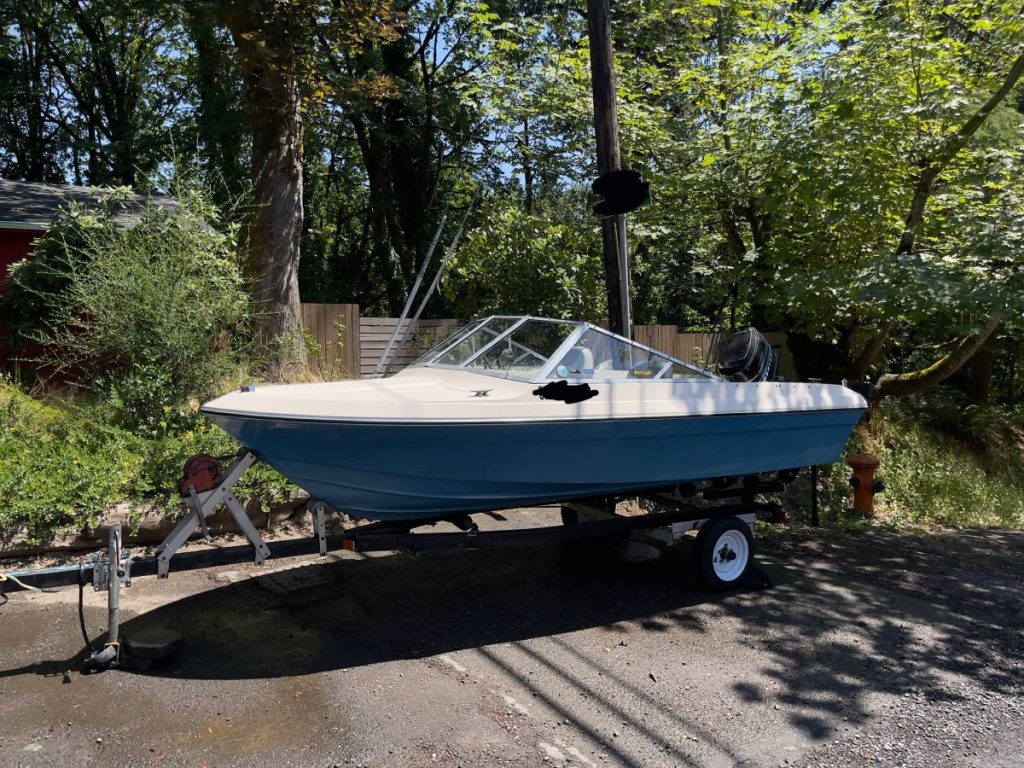 Condition: Good, no leaks, engine runs but has a miss

This would appear to be it: the least amount you can spend for a pleasure boat that is intact and has a hope of being seaworthy. It has a fiberglass hull and an 85 horsepower outboard motor. As is common for outboard boat engines, this is a 2 stroke engine. The reasons for this are that boats don’t need a lot of  torque, but top-end horsepower is useful. (Snowmobiles are usually 2 strokes for the same reason.) 2 stroke engines are also smaller and lighter than 4 stroke engines, which is important when you have to swing the whole engine back and forth to steer, and pick it up out of the water when you’re done. 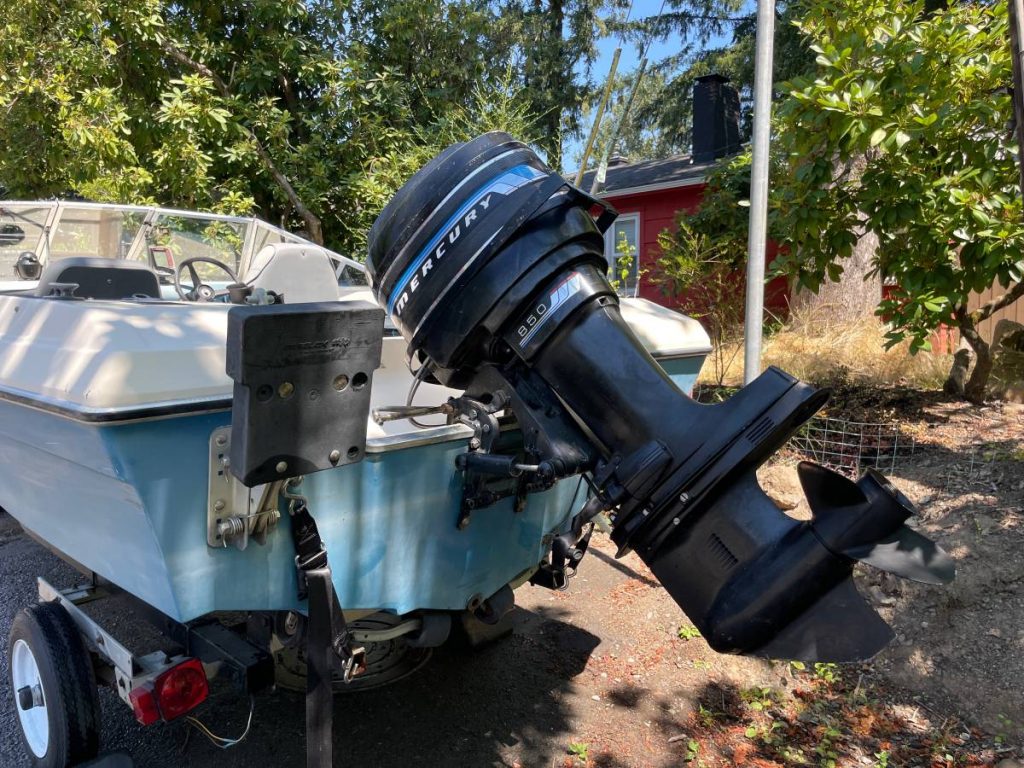 This particular Mercury outboard is having some issues; the seller says it runs, but “something is just off.” There aren’t a lot of moving parts in a 2-stroke motor, no valves or camshafts, so the list of potential trouble spots is few. But finding parts for a 45-year-old boat motor might not be the easiest thing, and replacement outboards aren’t cheap. 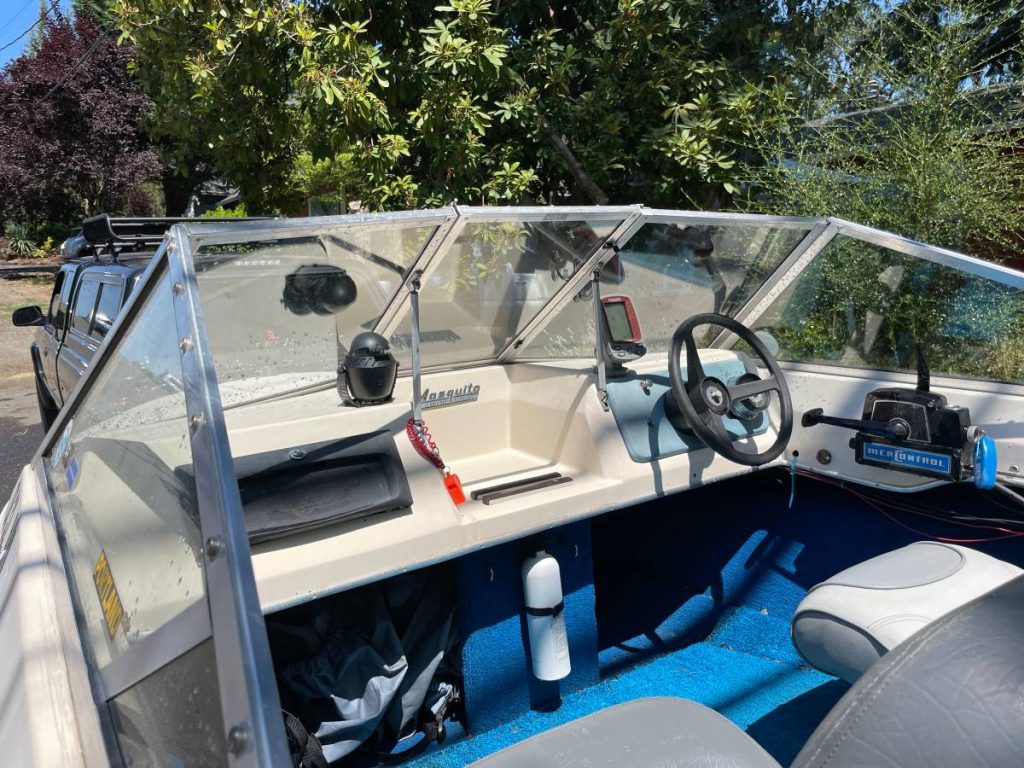 Apart from the engine issues, it doesn’t look too bad for a $1600 boat. The seller lists a lot of recent work done, including work on the included trailer. It sounds like it might have been in storage for a while, and if the engine wasn’t put into storage properly, that could account for its problems now. 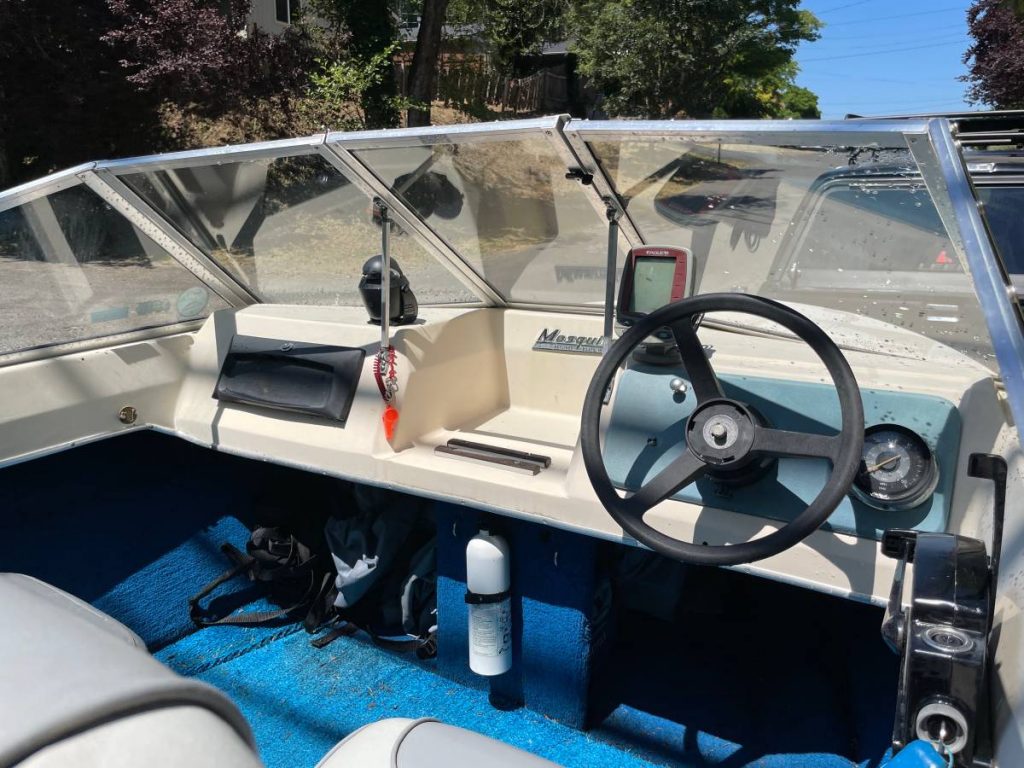 Boats are not a cheap hobby, but if the price of entry is this low, this could be a good way to dabble without having to commit to too much expense. And chances are, if the engine isn’t fixable, you can move it on to another owner for the same price. 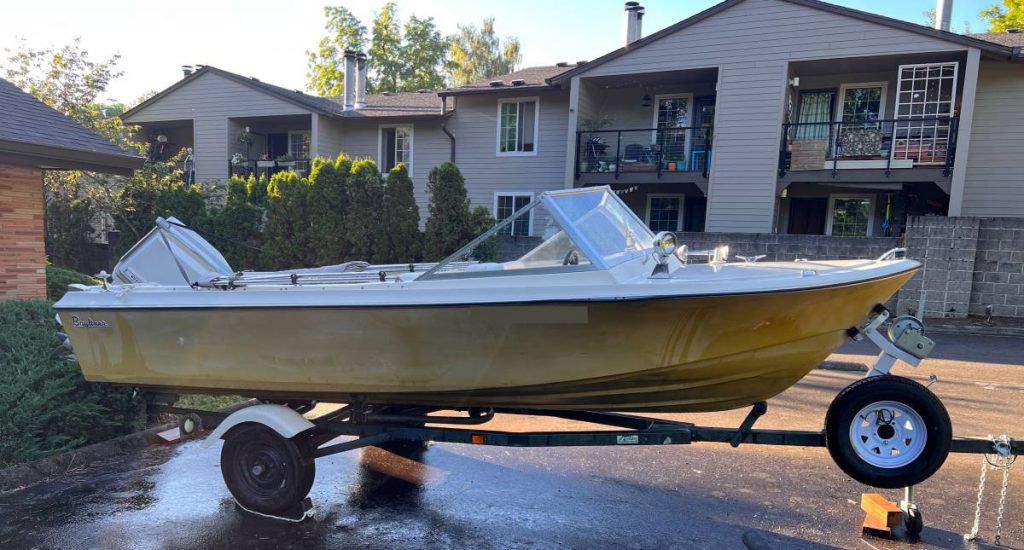 Raise your hand if you knew that Chrysler Coropration was once a giant in the boating industry.

That’s what I figured. Chrysler Marine fell victim to the corporation’s money troubles in the late 1970s, and was sold off piecemeal to other companies in the early ’80s. But in the 1960s and ’70s, Chrysler boats and boat engines were huge. 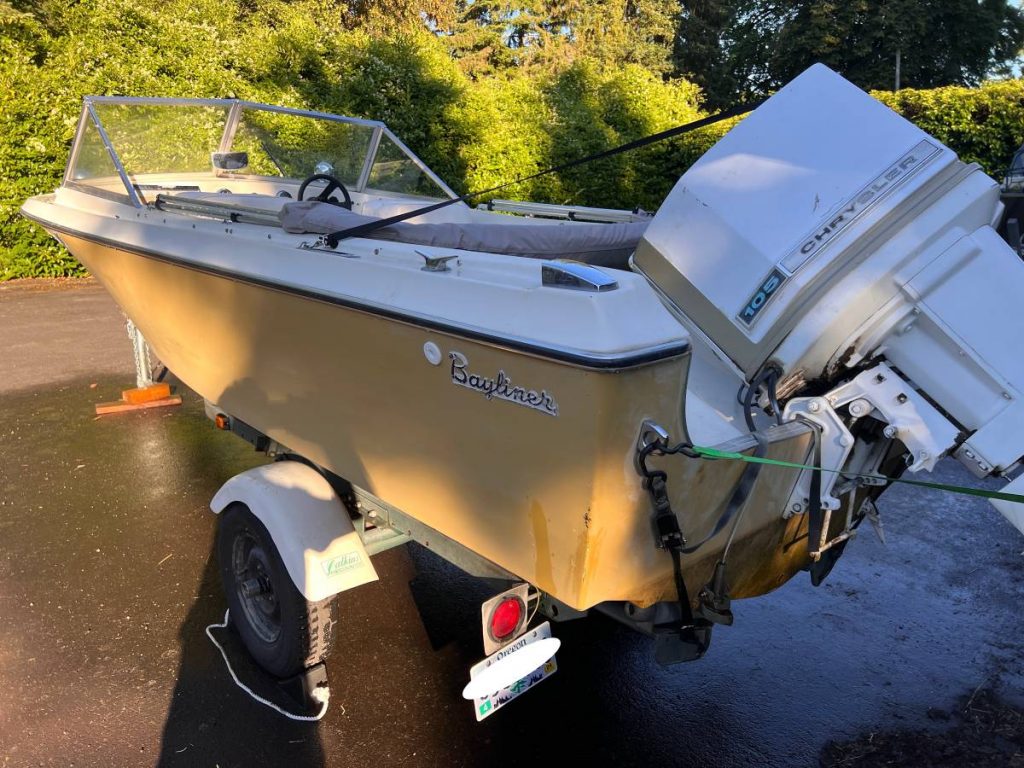 This 1970 Bayliner would have been a competitor to Chrysler’s speedboats, but it shares the same 2 stroke outboard motor. Chrysler boat motors were highly regarded and very reliable, and this one has been gone over carefully, and according to the seller, runs like a top. 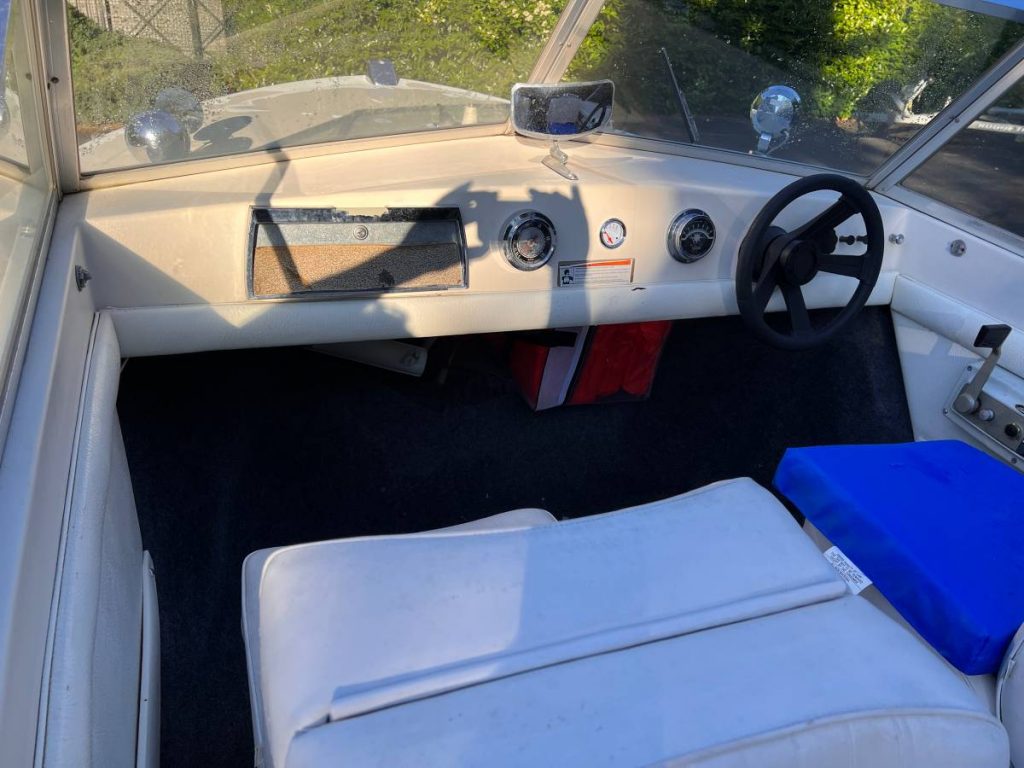 The rest of this boat has been well cared-for as well, and it shows. A long list of recent repairs and maintenance is listed in the ad, and it comes with a whole assortment of extras, including the all-important cover. These old Bayliner boats have fiberglass hulls, but wooden decks and structure, so it’s important to keep them out of the elements when they’re not supposed to get wet. 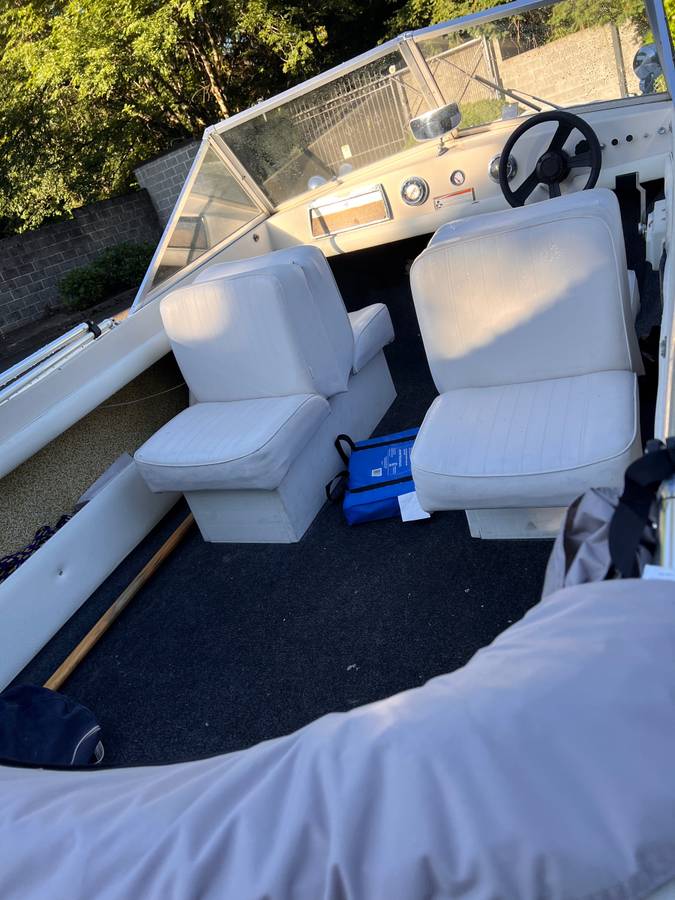 I have to be honest: I really dig this boat. I have no idea if it’s actually a good deal or not, but it sure seems to be. I can see myself putting on a Hawaiian shirt and my straw trilby, playing a little Herb Alpert on the sound system, and puttering up to the marina bar at happy hour. (I don’t know why it has to be Herb Alpert, but it does.)

And that’s the problem with looking at cheap boats; they put all kinds of bad ideas in your head. Everybody knows you don’t really want a boat anyway – you want a friend with a boat. But for these prices, you could probably learn that lesson first-hand and not lose too much in the process. So if you’re going to make this particular mistake, which one is it going to be?