Yesterday, I got an email from David with a link to a car from our very own S.W. Gossin, from over in his neck of the woods. I took one look at the car in the ad and knew immediately what I had to do: make it a Cadillac day. I found a comparable car, not here in Portland but in California, for us to check out. First, however, let’s put the ’90s to bed and see who took home yesterday’s prize:

Yep, that is what I expected. It’s hard to beat the utility of a simple little truck. And yes, thank you all for pointing out that I’m a idiot and the Saturn is in fact the SC2 model. I trusted the listing instead of my own eyes, and I should know better by now. Doesn’t matter, I guess, since it lost anyway.

Moving on: Today, it’s an East Coast vs West Coast battle, courtesy of Cadillac’s dinosaur of a personal luxury coupe: the Eldorado. The two cars we have today are only a year apart, but that year spans a generational change. And similar as they may have once been, three thousand miles of open road isn’t the only thing separating them now. Let’s check them out. 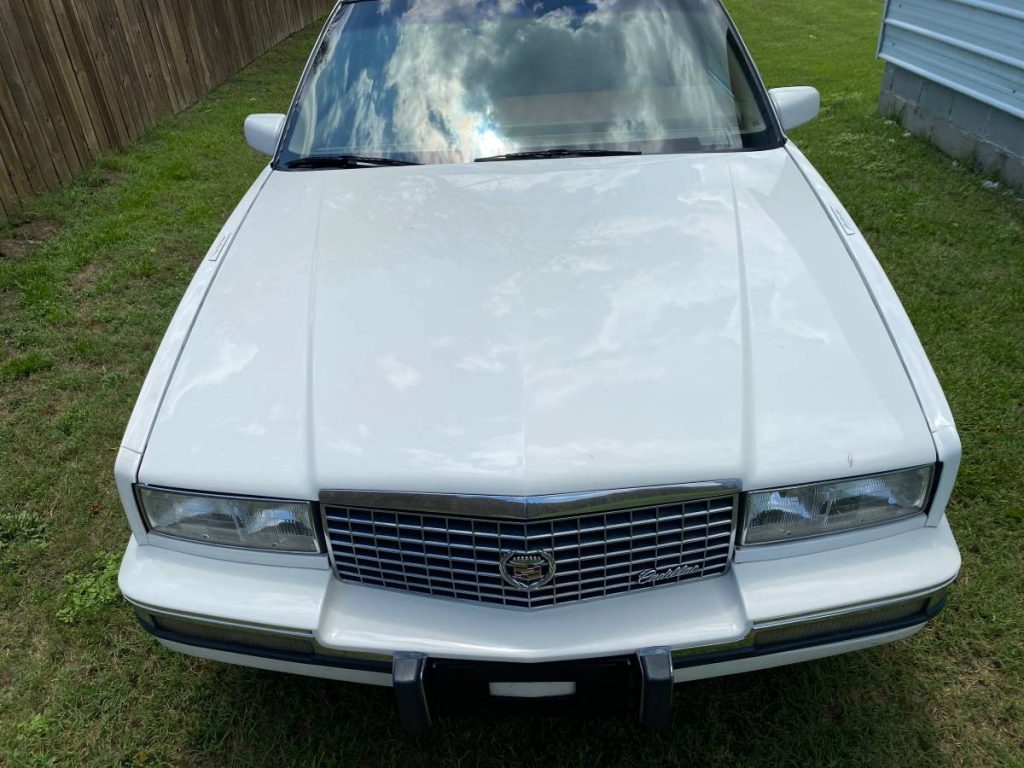 Runs/drives? Drives well, according to the ad

Our East Coast contender is the final year of the eleventh (!) generation Eldorado, downsized from the already-downsized 1979-85 model. It has the final evolution of Cadillac’s HT V8 engine, here displacing 4.9 liters and putting out a nice round 200 horsepower. This engine had troubles early on, but by the mid-late 1980s, GM had ironed out most of the kinks and it became a reliable, pleasant beast (as long as you didn’t need to change the rear four spark plugs). 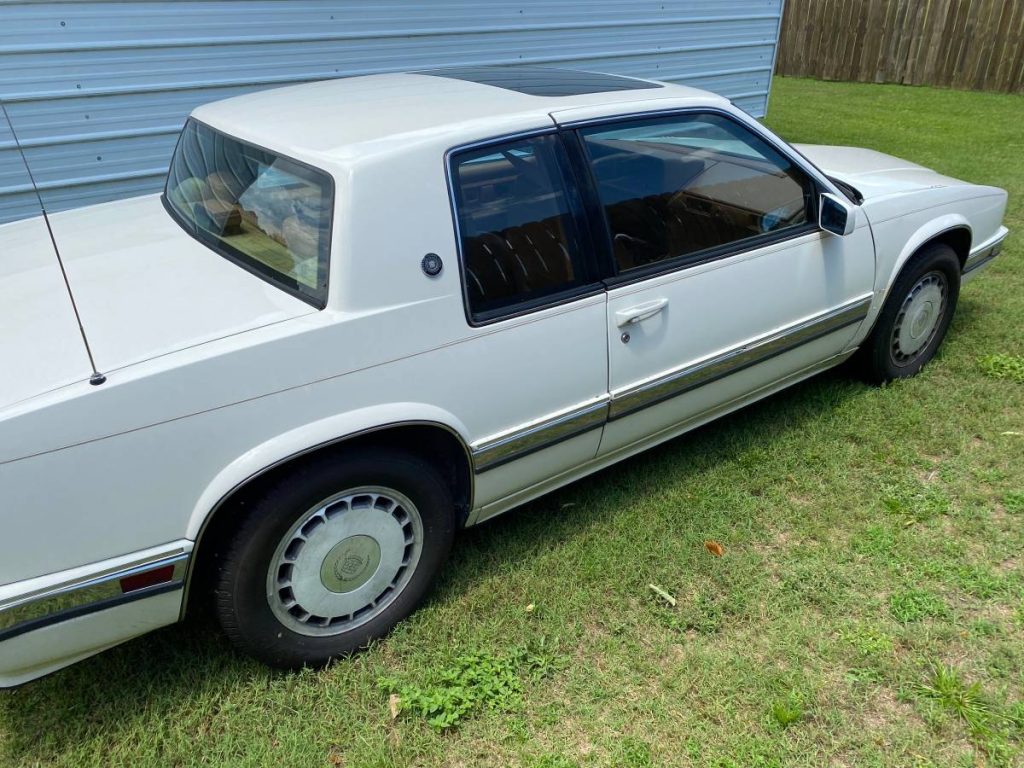 This Eldorado is the Touring Coupe model, with larger wheels and a little bit firmer suspension than the standard car. It isn’t quite “The Caddy That Zigs,” but it doesn’t quite lumber around like a drunken rhinoceros either.

The seller says they bought this car “to restore,” but it looks to me like it doesn’t need much. New tires, freshly-serviced air conditioning, and “a bunch of other fixes” sounds like a pretty damn nice $2000 car to me. The windshield is cracked, but if that’s all that’s wrong with it, it’s a good deal. 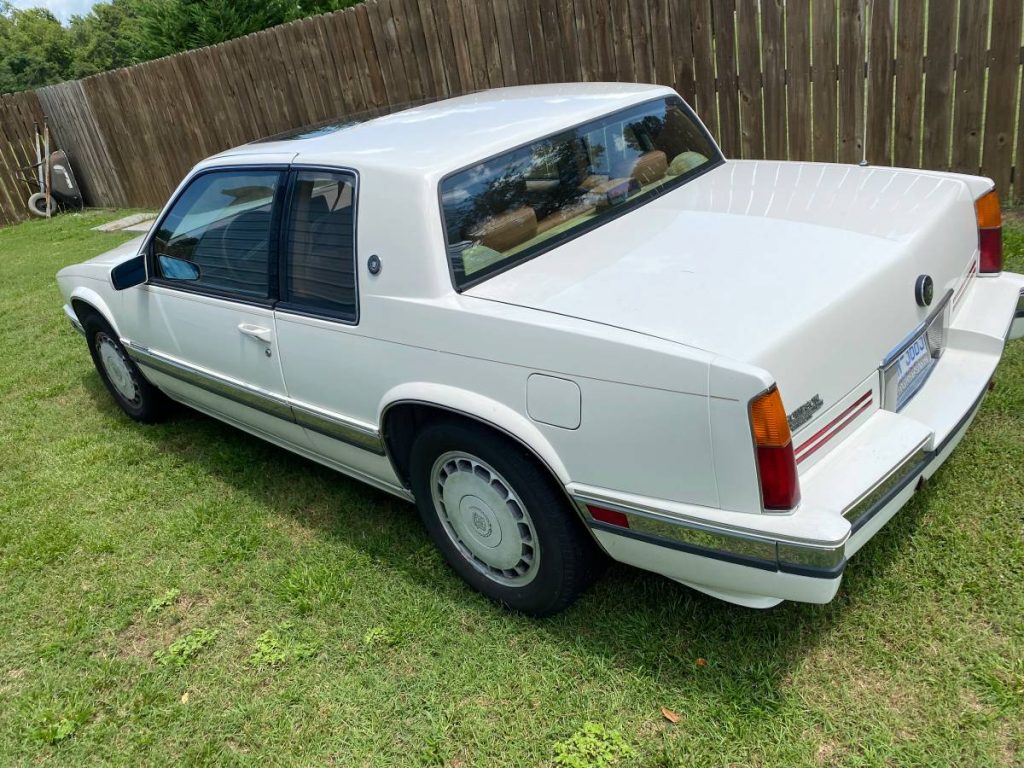 It is too bad we don’t get any photos of the interior, because that might be the make-or-break factor. If it’s trashed inside, that could turn off a lot of buyers. But I’d say for $2000, it’s worth going to take a look to find out.

[Editor’s Note: I’d like to point out that whomever had this car took the trouble to replace the all-red-with-a-fussy-little-Caddy-crest US-spec taillights with these Europe/global-spec units with amber rear indicators. Or, as I look into this a bit more, it could be that this one was one of the Eldorado Touring Coupe edition ones that used the amber/red taillights to give it a more sporty look. Either way, I think they work in the car’s favor. – JT] 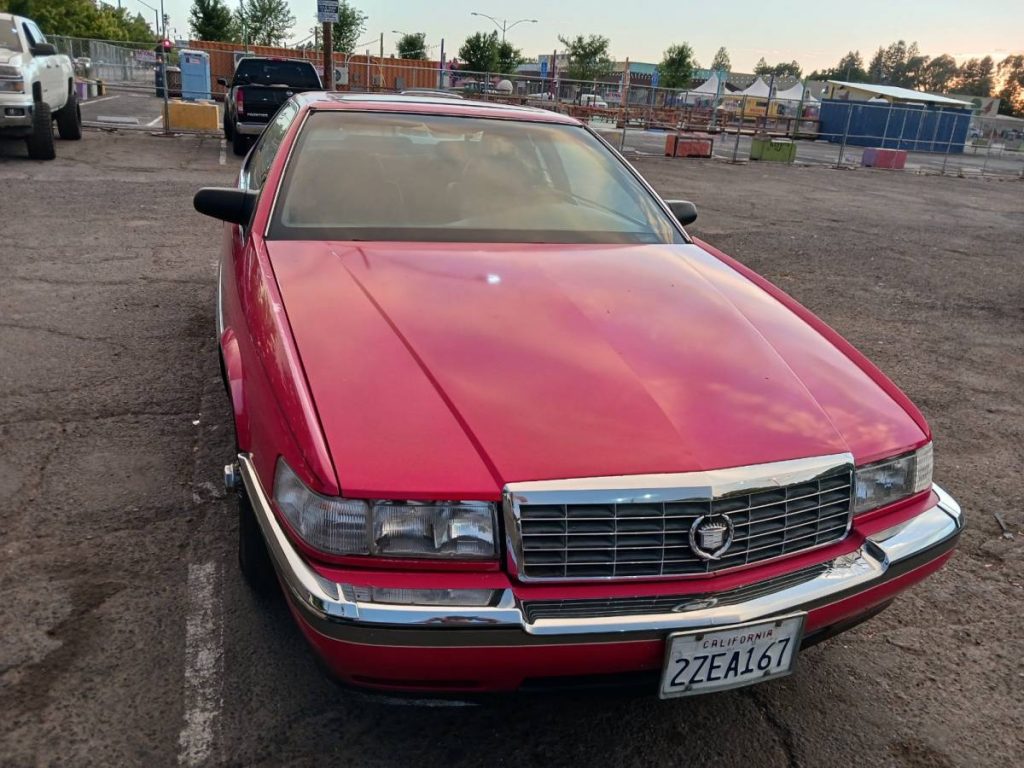 Runs/drives? Doesn’t explicitly state, but I think we can assume

When I first saw the lead image of this car, I assumed it was just faded red. But then I looked at the other photos, and I am convinced that it is, in fact, painted in a color somewhere in the magenta/fuchsia/hot pink neighborhood. 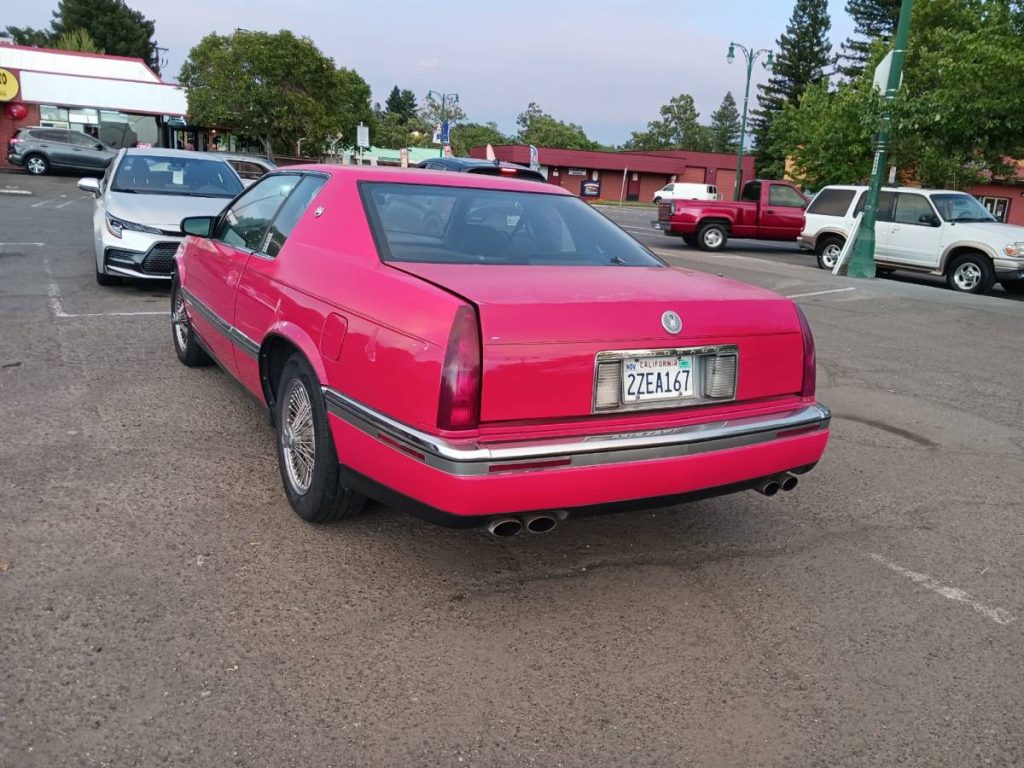 That’s right, folks; history is being made. For the first and possibly last time on Shitbox Showdown, we are looking at a pink Cadillac. 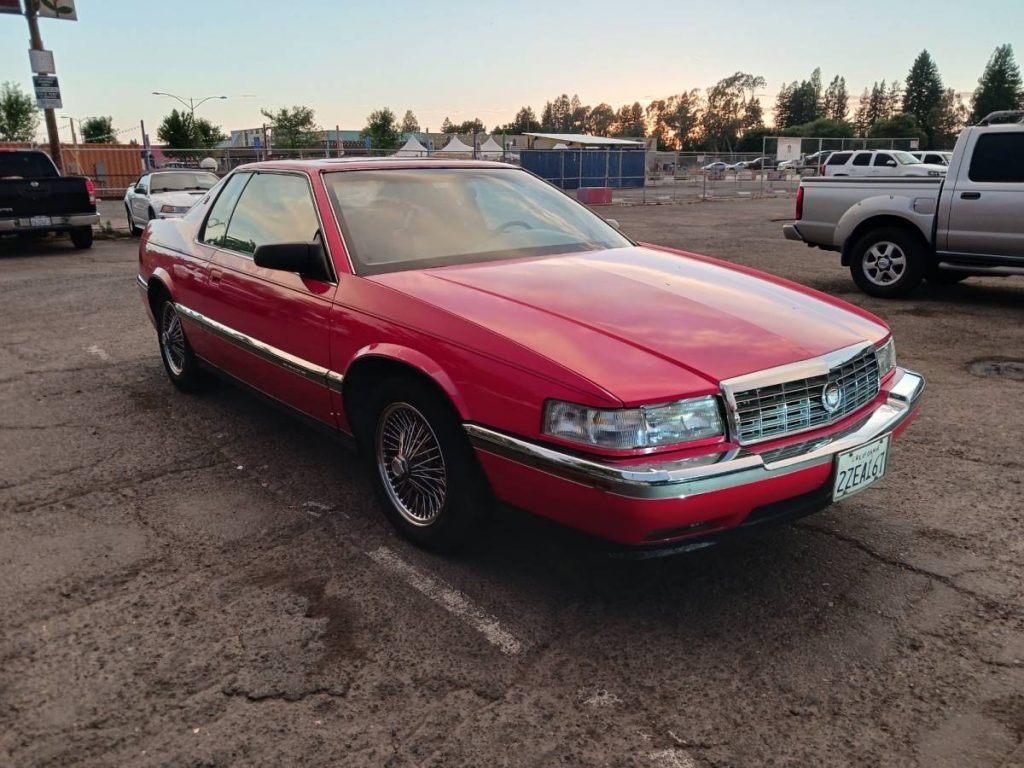 The twelfth generation Eldorado grew a bit, and lost a little bit of the old-man stodginess of the previous generation’s styling. Gone are the bolt-upright rear window and optional landau top (though the aftermarket was happy to oblige, if you really wanted one). This being a 1992 model, it still uses the 4.9 liter HT engine, which would be replaced in 1994 by the notorious powerful-but-fragile Northstar V8. 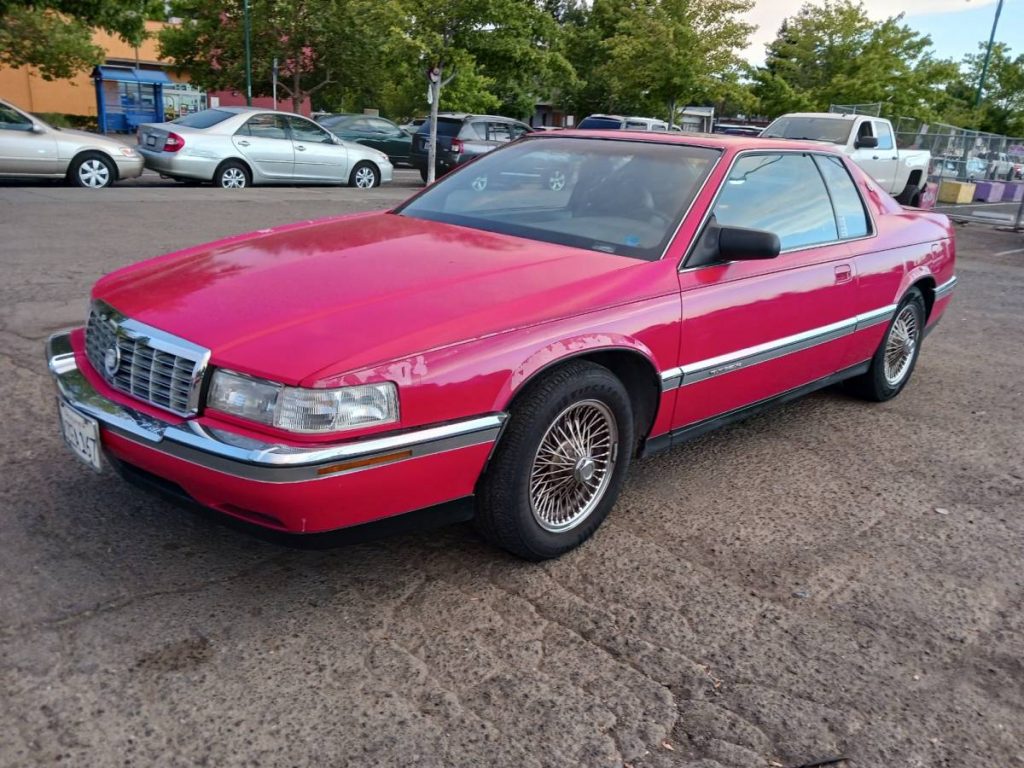 Again, we aren’t given any interior photos, and there’s precious little else to go on about this car’s condition in the ad. But if the tags are current, one can assume it’s being driven at least now and then. Like too many Cadillacs, it appears to have some additional chrome stuck on it; I don’t think the bumpers were originally that shiny. And the wire wheels are aftermarket as well. They’re nowhere near deep enough to do Houston proud, and don’t fit the sleek style of this car at all. But when you start out by painting a car hot pink, I guess you stop worrying about what “goes with” the rest of the car.

Well, there they are: one survivor from North Carolina and one modified California special. Both run and drive well, and the price difference is only $50. I guess if you can’t decide, you can flip a coin. (Yes, in fact, I can work a music reference into just about anything.)