Good morning! It’s time for another Shitbox Showdown, and today, we’re looking at a pair of economical vehicles from the Age of Lollapalooza. Before we do, however, let’s settle the score on our project cars from yesterday:

Closer than I thought, actually. I expected the BMW to run away with it and leave the poor old Jensen languishing in obscurity. Personally, given the choice between these two, I’d probably take the Jensen, mainly because it’s as close as I’ll ever get to a Lotus.

Moving on: Somehow, amid the baggy jeans and the Pauly Shore movies and the saxophone-playing politicians, a funny thing happened in the 1990s: Cars got good. Really, surprisingly good. Performance started creeping up again after years in the doldrums, styling emerged from the crisp-edged but same-old-same-old ’80s designs into excitingly swoopy shapes, and build quality and reliability rose dramatically across the board (though in many cases there was nowhere to go but up). Technology like multi-port fuel injection and distributorless ignition made stumbling and stalling a thing of the past, and improved fuel economy. [Editor’s Note: I’m pro-distributor, actually. Not a fan of multiple coil packs multiplying the vehicle’s potential failure culprits, even if I have had my share of issues with long spark plug wires on distributor’d cars.  -DT]

These improvements are easy to see now, when the remaining cars from that era have twenty or thirty years under their belts, and hundreds of thousands of miles. In places where rust didn’t claim them, ’90s cars are still a common sight on the road, still chugging along. Once again, I’ve had to stay on the West Coast to find good examples; sorry, rust-belters. 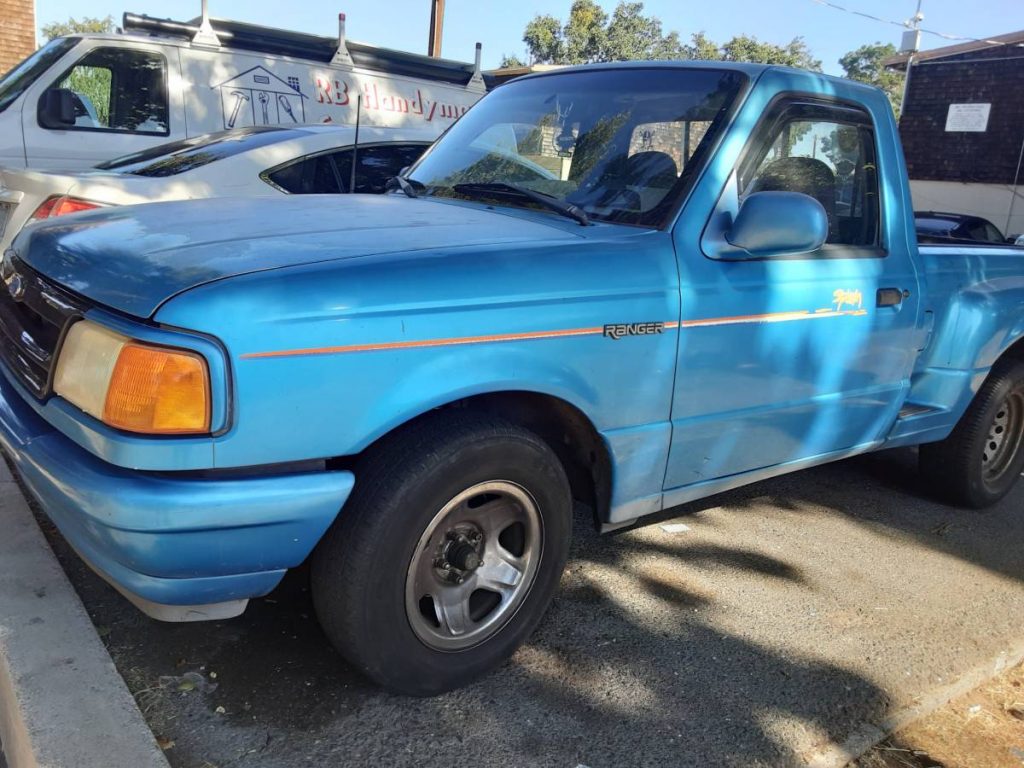 I’d be hard-pressed to think of a vehicle more emblematic of the 1990s than the Ford Ranger Splash. The second-generation Ranger was everywhere, and the Splash, with its fiberglass stepside bed and color options that came out of a bag of Skittles, was the one everyone wanted. 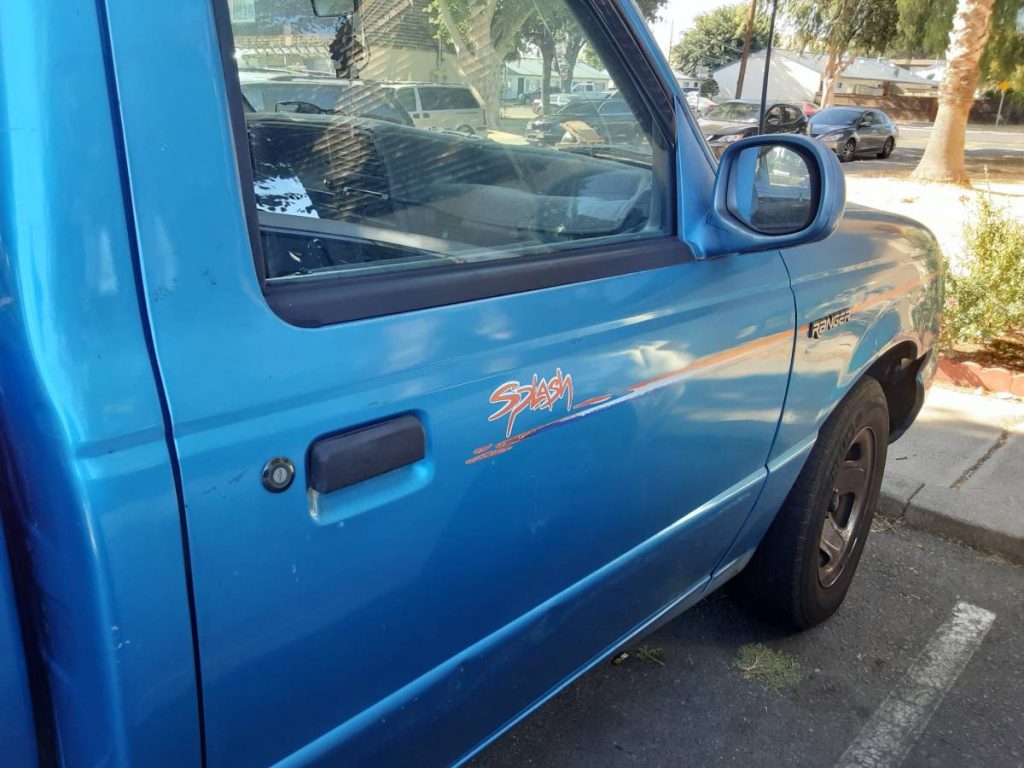 This Ranger is equipped with the best available powertrain: Ford’s basic 2.3 liter “Lima” four, here with two spark plugs per cylinder, and a Mazda-made five speed manual. It’s not the most powerful combination, but it’s essentially indestructible, and gets decent gas mileage (26 MPG on the highway!). It’s had a recent tune-up and some other work, and is driven daily, which means the seller trusts it. Always a good sign. 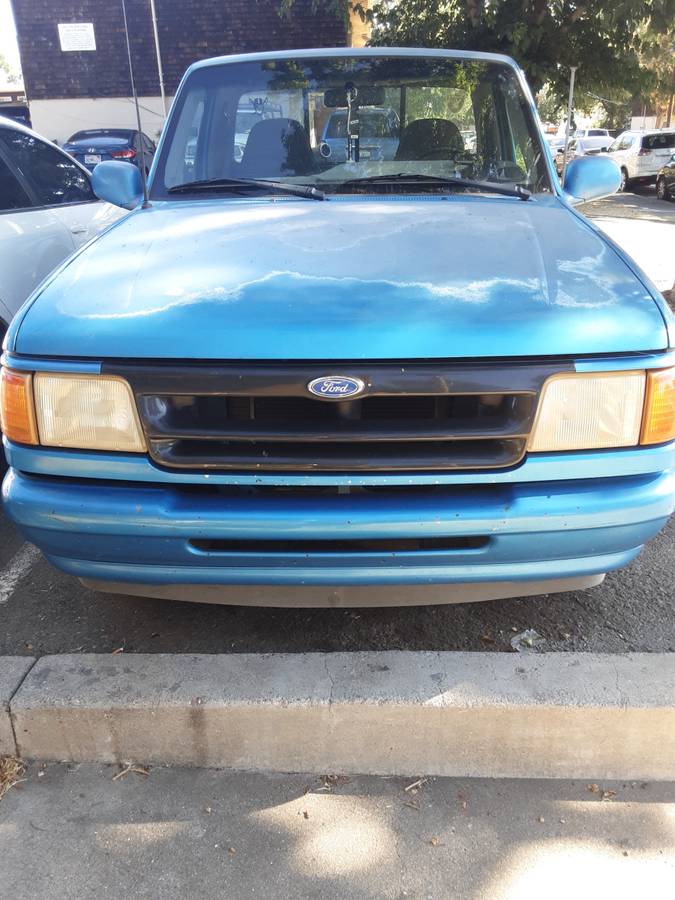 Outside, it’s a little beat-up and faded, but overall it wears its 29 years well. We don’t get any photos of the inside, or under the hood, unfortunately. Being a Splash, this truck will have bucket seats and a center armrest. Sadly, it is not equipped with air conditioning, so summertime driving is strictly a windows-down affair. 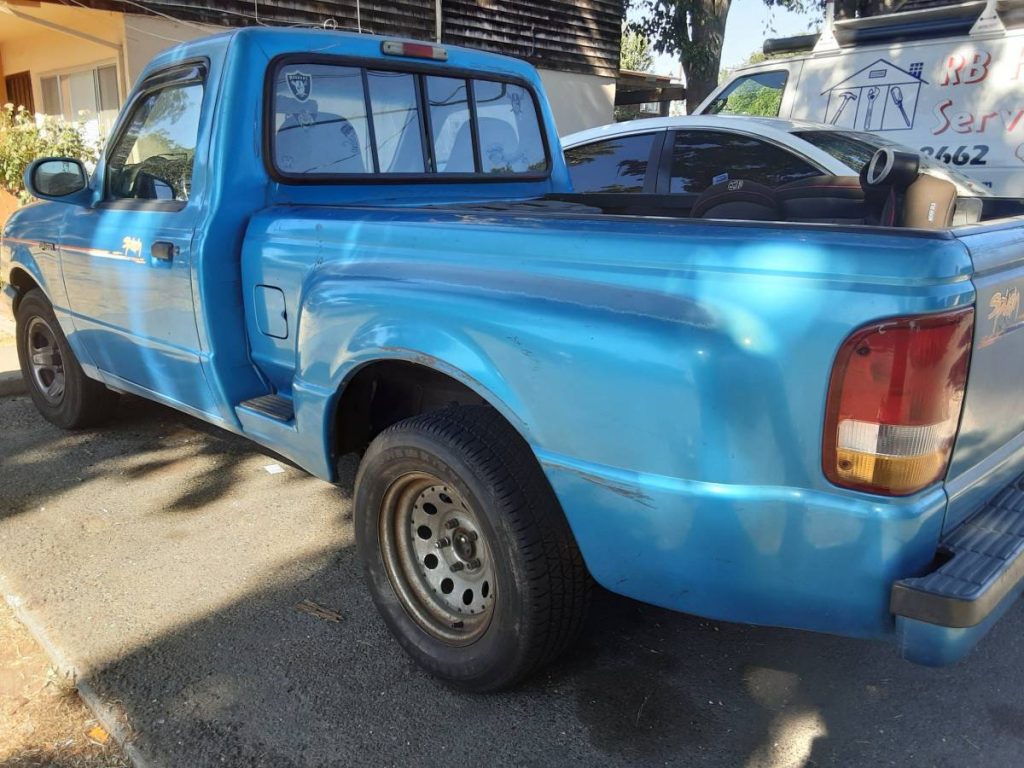 The ad mentions a matching camper shell, but it isn’t shown in the photos. If it is included, that would be a nice bonus, because just any old standard small truck canopy won’t fit this stepside bed. 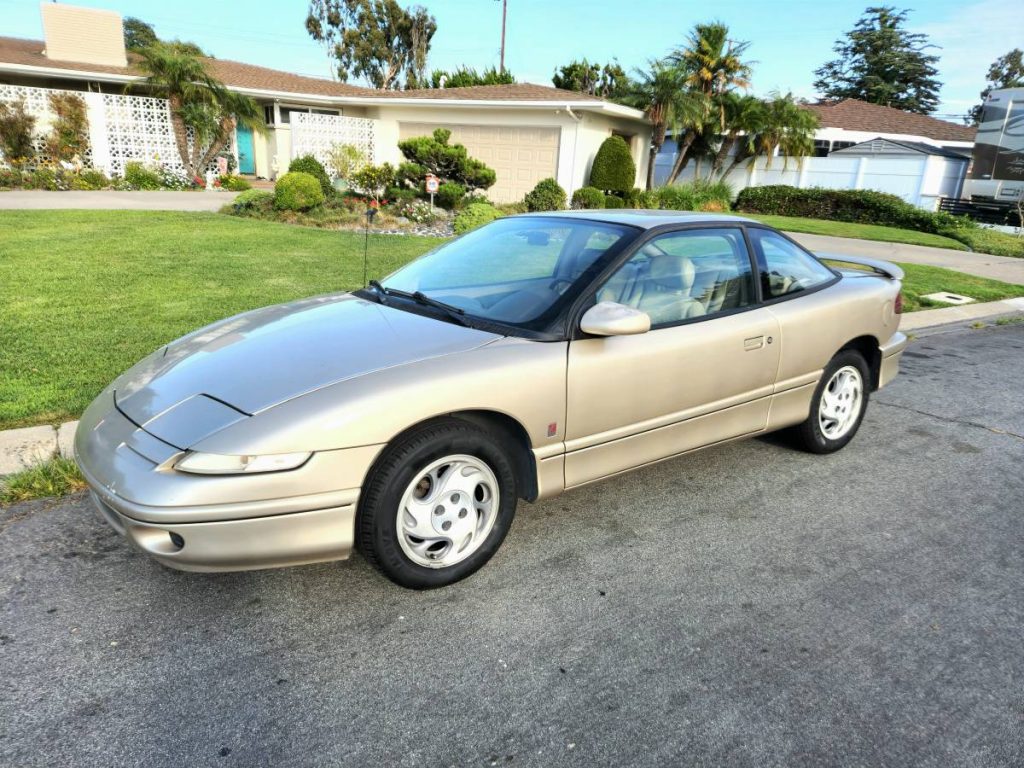 Runs/drives? Great, according to the ad

A different kind of company, they said. A different kind of car. Saturn was meant to be GM’s import-fighter division, but in practice, they stole more sales of Chevy Cavaliers than they did Honda Civics. But they were pretty good cars. Cheap, plasticky, and unrefined, but reliable and reasonably fun to drive. 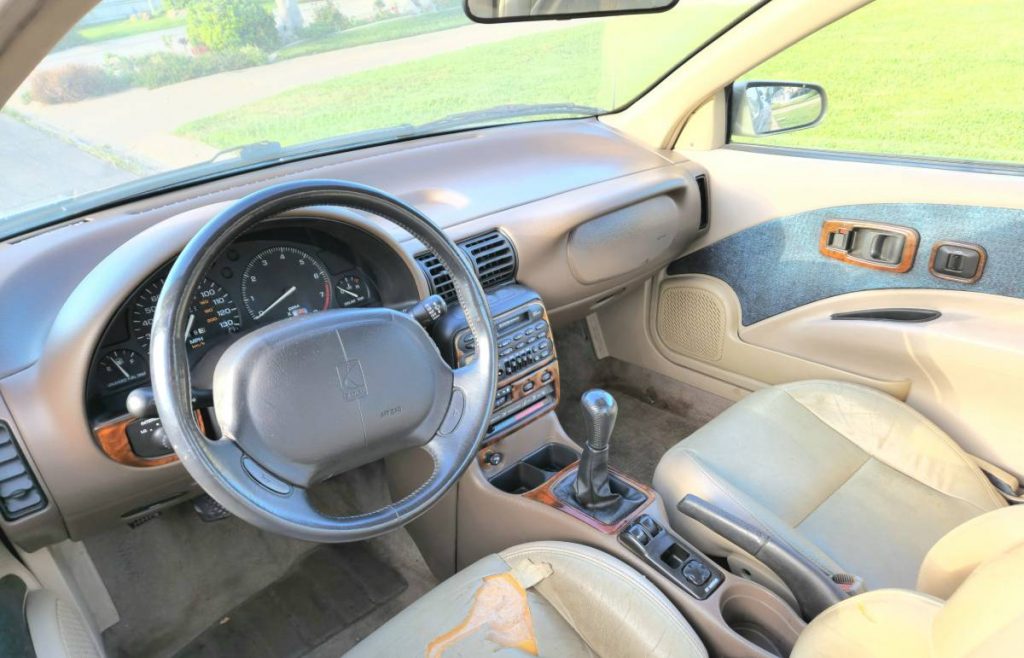 Saturn model names were about as simple as you could get: SL for sedans, SC for coupes, SW for wagons, followed by a 1 for the economy-minded model with a single-overhead-cam engine or a 2 for the sportier twin-cam version. Gearing and suspension tuning were different between the 1 and the 2 as well. As a former owner of an SC1 similar to this, I can tell you right now it’s no sports car, no matter how swoopy and stylish it is; the tall gearing and skinny tires of the 1 soak up a lot of the fun. It is good for fuel economy, though, rated at over 30 MPG highway . 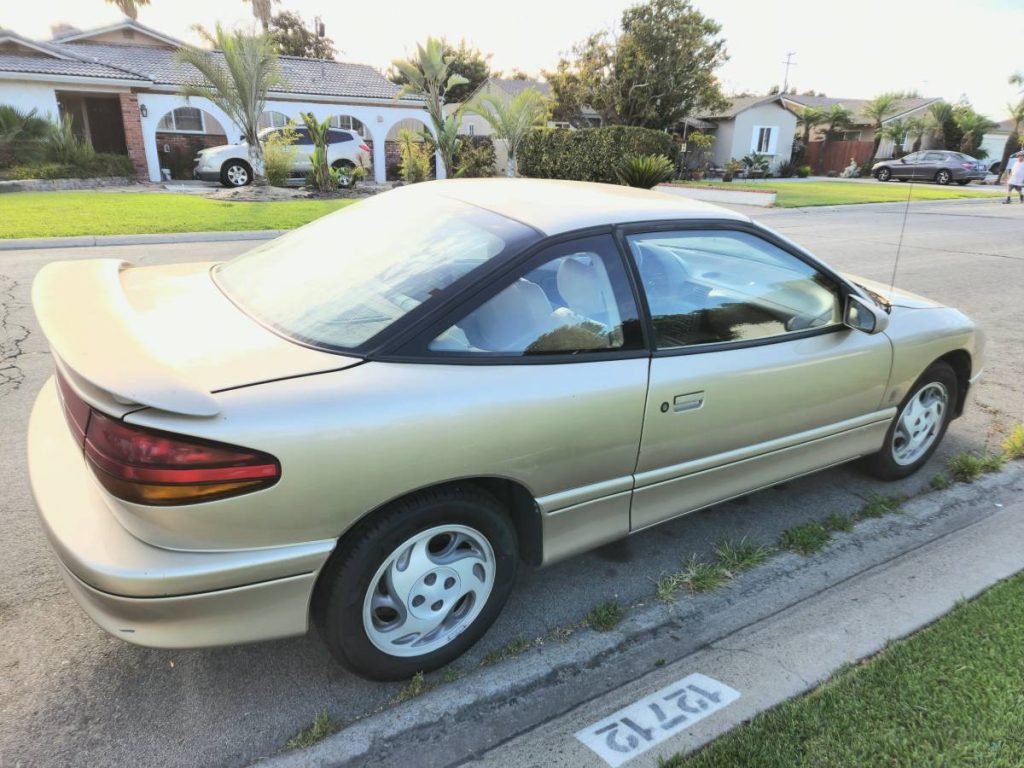 It looks like it’s in good shape, but Saturn’s famous plastic doors and fenders hide a lot of sins. If this has been an Orange County car its whole life, I wouldn’t expect any rust hiding under the plastic, but it is always a possibility. The driver’s seat shows some wear, with the leather upholstery coming apart, but it’s nothing a seat cover couldn’t fix. The rest of the interior looks decent, and pretty fancy for a Saturn. 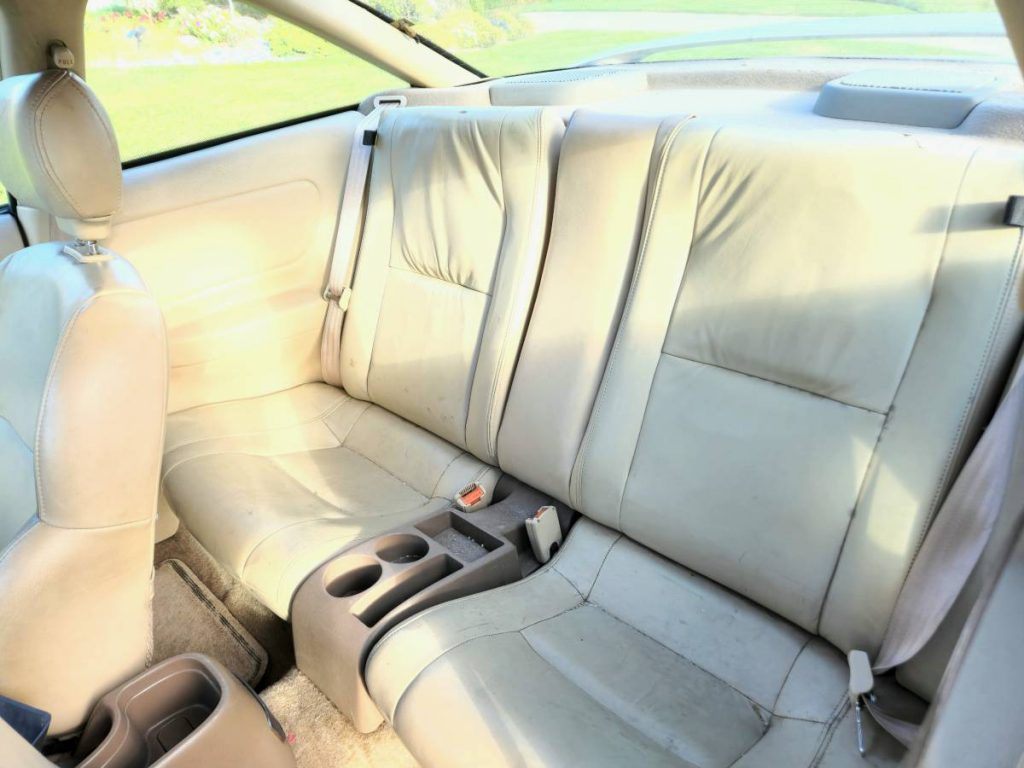 No mention of its mechanical condition is given other than “runs and drives great,” but these are stout little cars, and having current registration means it hasn’t been sitting around. They do mention that the headliner is falling down; this is a common problem. I can tell you from experience that spray adhesive will not work to fix it, at least not for long.

So there they are, two relics from that decade when everything seemed to be going so well. Both run and drive just fine, so it’s a matter of style choice – do you want the sporty-looking pickup, or the zoomy-looking coupe?