One of my favorite things to write about is when someone turns an old school bus into a cozy RV. I love the idea of an old vehicle creatively given a new life. Back in the 1960s, school bus manufacturer Blue Bird saw an opportunity to expand, and ended up building a luxury RV so sought after that it would attract the likes of President Jimmy Carter and Johnny Cash. This is the wonderfully expensive Wanderlodge, an RV built by a school bus maker.

Blue Bird has been around for almost a century, and through much of that time the company was known for one thing: building buses. Today, the company is one of the top school bus builders alongside Daimler’s Thomas Built Buses and Navistar’s IC Bus. The Henry Ford Museum notes that entrepreneur Albert Luce Sr. was the owner of two Ford dealerships in 1925. That year, he was approached by the Penn Dixie Cement Co. with a need for a bus to transport the company’s workers. Luce obliged, building a vehicle out of a wooden bus body sourced from North Carolina combined with the chassis of a Model T.

Unfortunately, the bus body didn’t stand up well to Georgia’s rough rural roads. The body was so poorly equipped for the task that Luce reportedly feared that it wouldn’t even survive long enough for the cement company to finish paying for the bus.

This didn’t deter Luce, and he decided to find ways to improve on the design. By 1927, he perfected the design. His new bus improved on the original design with the incorporation of steel.

While wood and even canvas was featured in the new bus’ design, a steel frame served as its backbone, adding strength. The bus was put into service as a school bus and it’s often credited as the first steel school bus. Luce would build a handful more of buses before incorporating the Blue Bird Body Company in 1932. The 1927 bus, now in the hands of the Henry Ford, is called the Blue Bird No. 1.

As the Volume 35 of the International Directory of Company Histories  notes, Blue Bird would grow through the 1930s to the 1960s to become the fourth-largest school bus manufacturer in the United States. Also during this time, Luce’s health was declining, and his sons George, Albert ‘Buddy’ Jr., and Joseph began taking over Blue Bird operations. Buddy was reportedly company President in 1950 and the sons were running the company when Luce passed in 1962.

That brings us to the Wanderlodge, or the Transit Home, as it was originally called.

While Blue Bird was known for its school buses, the Luce sons wanted to expand the company’s portfolio. The company tried its hand at transit buses, charter buses, and even window fans. Vehicle history site Coachbuilt notes that these products were failures, but its foray into recreational vehicles would be different.

The 1960s were a great time for RVs. The concept of the motorhome became popular and at the end of the decade, fantastic fiberglass campers would arrive on the scene. Blue Bird wanted in, and in 1963 introduced the Transit Home.

Unlike motorhome pioneers like Raymond C. Frank, Blue Bird didn’t have to build an RV from the ground up. Instead, it looked into its own catalog and chose the transit bus-style All American school bus as the base for its RV. Thus, its body is steel like a school bus and unlike the fiberglass motorhome designs of the era.

The 1963 Transit Home prototype toured the country for a couple of years. Blue Bird hoped that people would see the RV out in the wild and place an order, but the trick reportedly didn’t work. It was looking like RVs would go down on Blue Bird’s list of failed ventures. Then, in 1965, House Beautiful magazine published an article about the Transit Home. The company got five orders for the $12,000 RV ($116,964 in today’s money), kicking off production.

These first Wanderlodge RVs looked a bit like their school bus siblings with similar front fasciae, lighting, and windshield. But the side windows are different, and the side door is moved back.

The door placement allows a passenger to sit next to the driver, like in a typical motorhome. Length comes in at 31 feet with a width of 8 feet.

I found an old brochure from Blue Bird detailing options and features for the 1964 model. A lot of it is nothing amazing; just standard RV stuff. Some of my favorite specs are its weight; 17,520 pounds (later models would weigh 40,000 pounds or more), and the expected fuel economy of 8 mpg. 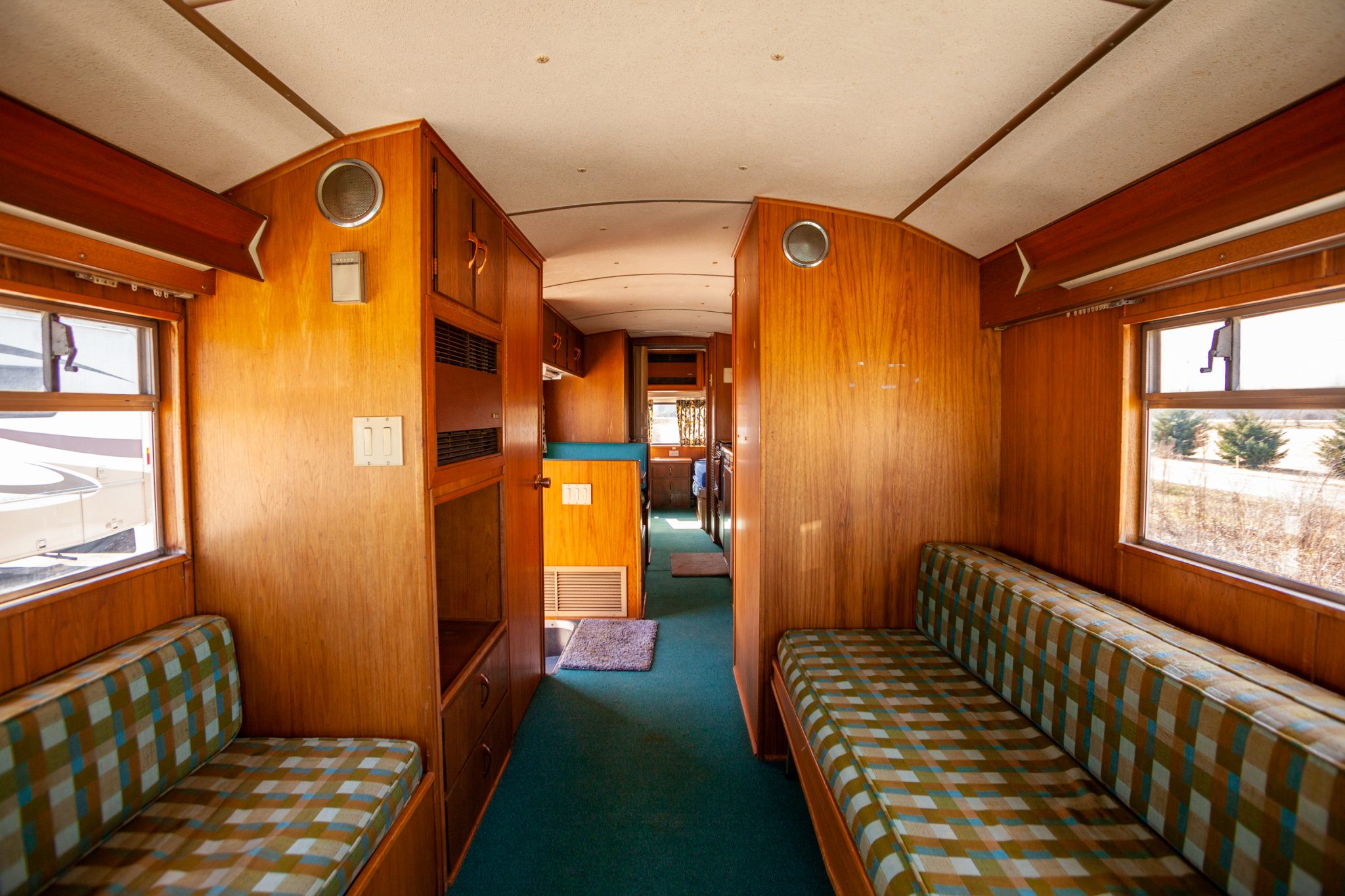 These first Transit Homes didn’t have the diesel engines that you’ll commonly find in RVs of today. Instead, Blue Bird offered your choice of domestic gasoline power flavors. The brochure speaks of a 5.4-liter Ford V8 making 205 HP, a 6.6-liter GMC V6 making 210 HP, and a 5.7-liter Chevy V8 making 220 HP. The 1967 Wanderlodge in the above photos has a 6.4-liter Ford Super Duty V8. In these early ones, the engine is up front and is accessed through a hatch between the seats.

Even though I’ve owned two buses, there is one thing that hasn’t really crossed my mind, and it’s what happens when a tire blows. None of my buses had a spare tire and neither does the Transit Home. Well, Blue Bird explains what it recommended. You would take the RV’s tire change kit, remove one of the outside wheels of the rear duals, then place it up front.

The RVs would receive updates through the years. One major update happened in 1968, when the Transit Home name was ditched for Wanderlodge. The base price also increased to $25,000 ($217,236 in today’s money). As production continued, the Wanderlodge line grew to include different lengths, widths, rear engine models, and diesel engines. And through much of the RV’s production run you could tell that it had school bus origins from the shape of its body to its lighting.

Through this time, the Wanderlodge became known for its build quality and customization.

As a 1987 issue of the New York Times notes, Wanderlodges were individually optioned by each owner. They even had a choice of their own color. Thus, Wanderlodges are often very different, and you can see it by going through forums dedicated to the RVs. Blue Bird’s high level of quality and customization reportedly attracted all kinds of celebrity owners from President Jimmy Carter, to King Hussein of Jordan, Muhammad Ali, John Wayne, Johnny Cash, and many more.

The the New York Times report describes the incredible level of luxury that you could get:

Nothing about a Wanderlodge is ordinary. It’s big – up to 40 feet long -and rides on a bus chassis. It’s posh. Inside, there’s a separate bedroom, full bathtub, VCR, complete kitchen with a microwave oven and gas grill, a dining area, a central vacuum system, two TV’s, carpeted closets, electric drapes, an intercom between the bedroom and the driver’s seat and an electric gear shift (push a button and you’re in a new gear).

There’s also a computerized horn that can be programmed to play up to 60 tunes; the standard repertoire includes ”America,” ”Rocky” and ”Amazing Grace.” The doorbell, meanwhile, plays 60 more melodies. Owners can have the company add their own favorites. College fight songs are very popular.

Those features are just the standard equipment. There are something like 200 options, including a compact disk player, a computer and a satellite TV dish. What’s more, if you’ve got some nifty idea of your own, Blue Bird will try to accommodate you. Waylon Jennings bought one and, to achieve maximum living space, had the bathroom yanked out. Another man decided that it was important to have a coal-burning stove in his Wanderlodge. King Fahd of Saudi Arabia needed four-wheel drive to plow through the desert, and, instead of a bed, he had a throne installed.

How successful was Blue Bird’s push into hyper luxury RVs? At the time when the New York Times wrote that piece, the company was selling more school buses than anyone else. Yet, the Wanderlodge was responsible for 20 percent of the company’s sales. The article goes further to describe the crazy modifications added by Wanderlodge owners. One person had their RV painted black on the outside, and done up completely white on the inside. Others had gold fixtures, leather headboards, or a custom rack to hold six-ounce bottles of Coke. Basically, if you had a dream and the money, Blue Bird was willing to make it happen.

As time went on, Blue Bird further evolved the design. Newer buses looked less and less like their school bus siblings and by 1991, the design was changed so drastically that you couldn’t tell that the Wanderlodge was a product of a school bus manufacturer. But through the time they remained famed for build quality and incredible customization.

Unfortunately, the good times wouldn’t last for the Wanderlodge. An archived RV Business report notes that Blue Bird changed hands a number of times in recent decades. It was acquired by a management firm in 1992, bought by Henlys Group PLC (the then owner of Volvo and Prevost) in 1999, then filed bankruptcy in 2006, with the remains getting handed to none other than Cerberus Capital Management. Yep, that’s the company that owned Chrysler back then!

In 2007, Blue Bird decided to leave the RV market, and put the RV division up for sale. Complete Coach Works Inc. bought the division and kept it going until 2009, when it to shuttered production.

Today, Wanderlodges remain coveted by people who know what they are. Otherwise, they seem to fly under the radar. If you want one, you’ll be happy to find tons of them for sale. I found at least one in every region of the United States and with prices ranging as low as $3,000 for total projects to over $200,000 for one of the last ones. My favorites are linked in these two sentences.

But really, these RVs are more or less what custom skoolie builders try to emulate. They are luxury RVs with the build quality and incredible longevity of a school bus. You don’t have to worry as much about water leaks when the roof and walls of your RV are built like a school bus. It’s a combination that today you’ll really only find in something like a Prevost.

Mercedes is a lifelong fan of all things powered by an engine. When she isn't driving one of her five Smart Fortwos or her 14 other vehicles she could be found in the cockpit of a Cessna 172 or perhaps swimming in any body of water that she could find. She also has a deep love for buses of all kinds. Please send her buses. mercedes@theautopian.com Instagram: @mistymotors Twitter: @Miss_Mercedes30 Facebook.com/neonspinnazz
Read All My Posts »
PrevPreviousCross-Country Caddy Battle: 1991 Cadillac Eldorado vs 1992 Cadillac Eldorado
NextHyundai And Kia Are Quite Literally Aiming For The MoonNext